You may think you need the biggest baddest nakedbike to get your adrenaline hit, but KTM’s 890 Duke R will convince you otherwise

I rode KTM’s 790 Duke in Spain on the launch of Metzeler’s M9 RR round black things earlier this year and, despite being released in 2017 and hearing how much fun the parallel-twin 790 was, I was a KTM Duke virgin when I took to the Ascari circuit. At the same event, I sampled all sorts of razor-sharp weaponry from Suzuki’s current GSX-R1000, BMW S1000R and RR, Kawasaki’s ZX-6R and even KTM’s big-mumma 1290 Super Duke R – all before I threw a leg over the 790. But when I did, I fell instantly and insanely in love with it.

I don’t know if I was faster around the Ascari circuit on the 790, but I felt faster, I seemed to round up other riders quicker and its loose, seat-of-the-pants nature made for a spectacular ‘back it in, slap ya knee on the deck, shove it up the inside’ lap. Despite always wanting the biggest crankiest high-capacity monster I could get, the 790 was the first bike that ever got me thinking I didn’t. 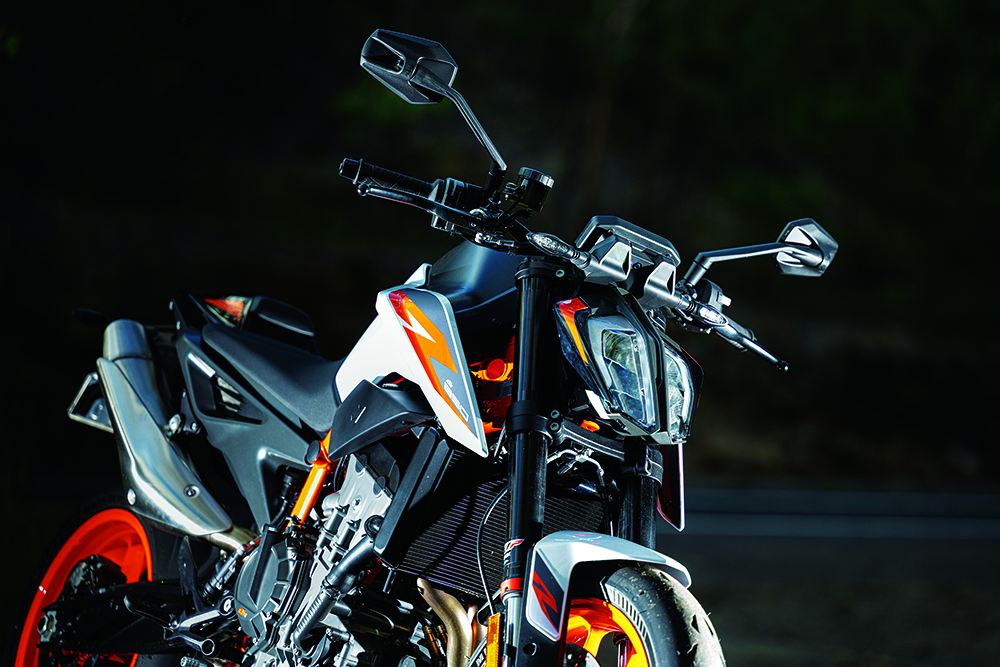 It wasn’t perfect, but spend a bit of cash on the suspension and the engine and it’d be the best Sunday carving tool this side of the evening roast.

But KTM beat me to it – my orange dream arrived in the form of the 890 Duke R.

Thanks to KTM’s way of doing things the 890 isn’t just a bored-out version of the 790. Not merely gifted a capacity increase, it’s lighter and gets flash new adjustable WP APEX springy bits at both ends, all the things that were on my orange Christmas wish list – and more. 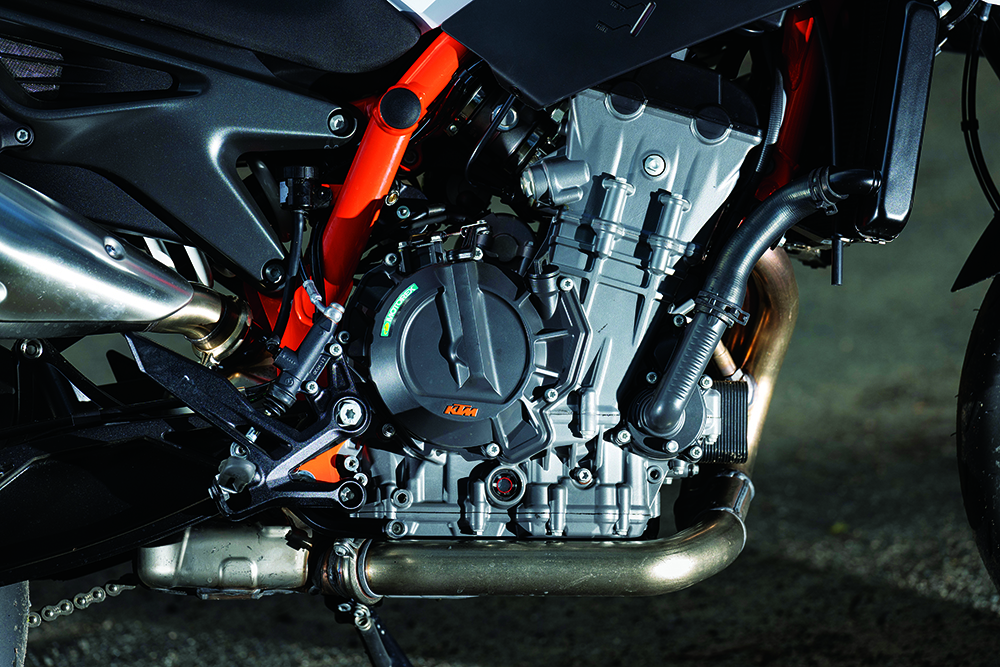 Just like the 790 does, the 890 feels very motard when you throw a leg over it, it’s tall, skinny through the waist and feels light, which at 166kg (dry), it is. Three kilos lighter than the 790 is a pretty substantial drop. The one-piece handlebar is low and wide and puts the TFT dash just beyond your hooter. The footpegs are higher and set back further than the 790’s and the seat is 9mm taller at 834mm. For my 186cm frame, it’s quite comfy and if you’ve spent time on the 790 Duke it feels more aggressive while still being really familiar.

Much of the basic architecture of the 790 powerplant remains the same, but there’s an extensive list of modifications aimed at increasing power, smoothing delivery and improving usability, all while reducing weight. There’s the capacity increase garnered by the increase in bore and stroke measurements, hotter cams, larger valves and new thinner cases to offset an increase in crank size and weight. That new crank smoothes the power delivery and increases torque. 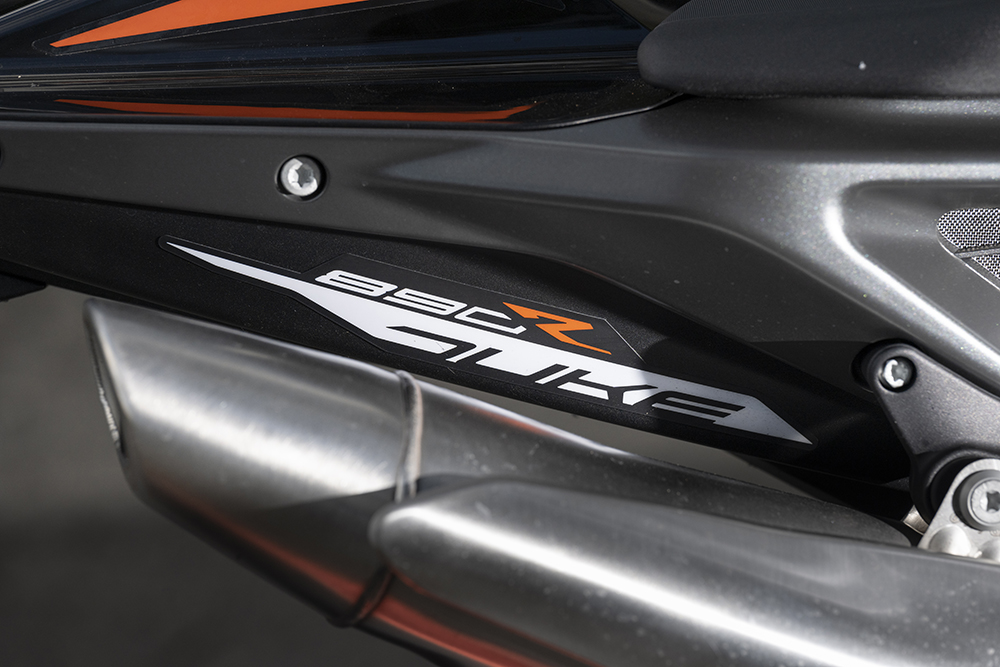 Power has increased from 77kW to 89kW, while torque has grown to 99Nm, 12Nm up on the 790. The 890 fires into life with far more refinement than we’re used to from an aggressive Austrian nakedbike, and that doesn’t change no matter how hard you whip it – it’s like a perfectly balanced Fisher & Paykel spin cycle. There’s no one particular place that you feel the engine improvements effects once you’re rolling, it’s a significant improvement in power and torque right across the rev range.

You can feel the extra torque as it pulls hard from as low down as 2000rpm which is especially good for sling shotting out of slow turns, and short-shifting your way from mountain corner to mountain corner. Yet the LC8c mill is making solid usable power almost all the way up to its 10,500rpm redline; it’s a fiery little powerplant that never seems to quit. 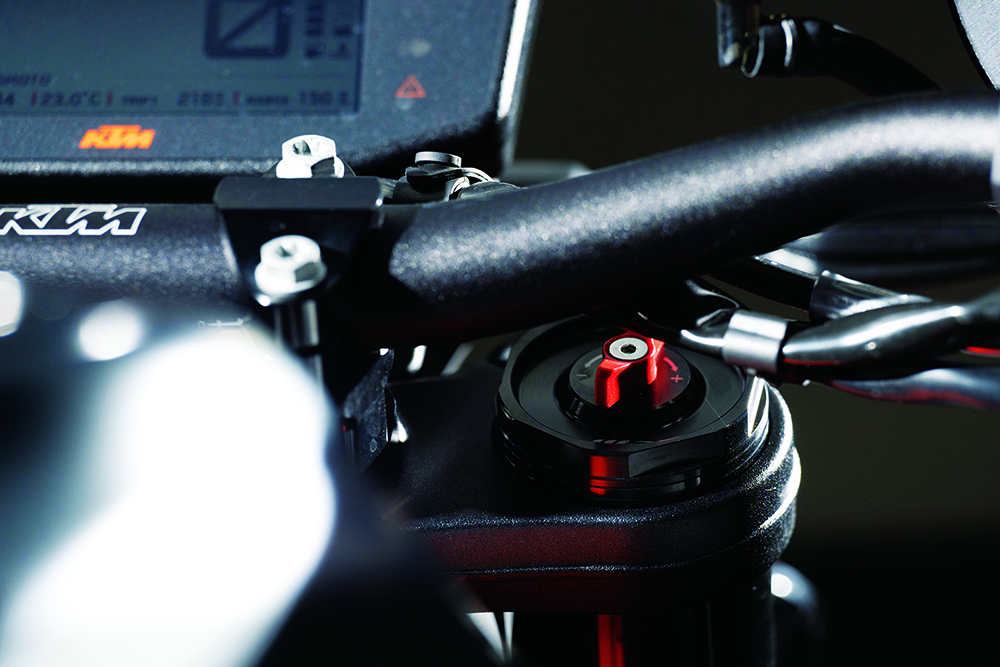 But best of all it’s fun with a good measure of versatility up its sleeve, and whether you’re up it for the rent through the twisties, meandering through traffic or buzzing down the highway, it’s happy and willing to rock at a moment’s notice at any rpm.

There’s no significant hit in any particular area and, with no real vibes combined with its ultra-refined feel, it almost lacks a little character. Especially compared to something like Yamaha’s MT-09, for example, which despite offering lesser power and torque – 84.6kW and 87.5Nm – the triple cylinder Yamaha is a more engaging engine to play with. 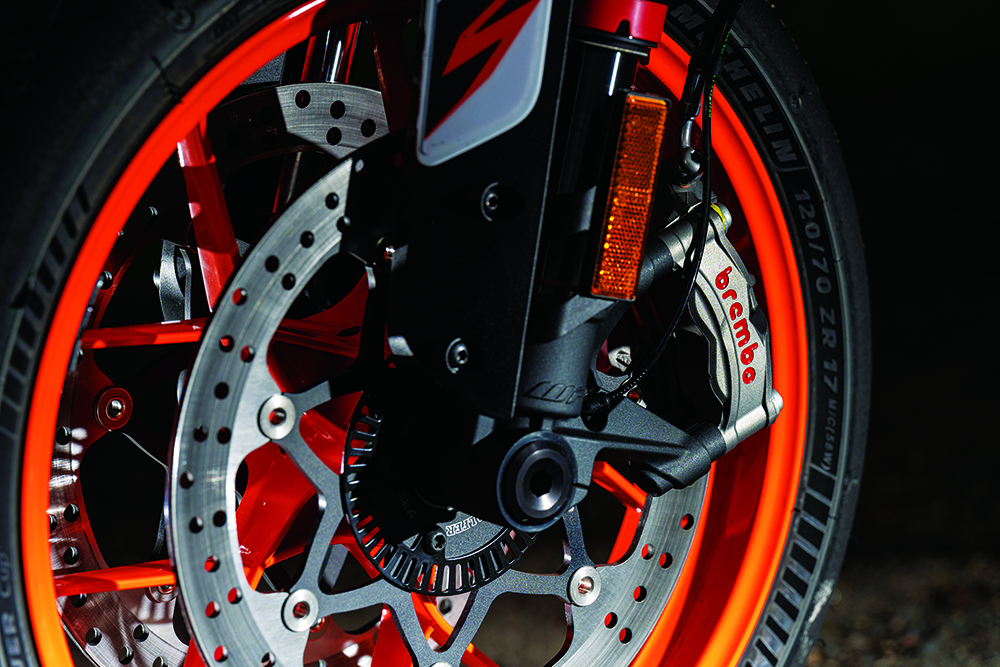 The six-speed box is a sweet unit for the most part although like so many KTMs, finding neutral at standstill is just plain painful sometimes. The Duke we tested was fitted with the optional – really KTM, optional? At this price point? – quickshifter. At $19,195 ride away and as we head into 2021, you’d expect a quickshifter. Especially with likes of Triumph’s similarly priced Street Triple, BMW’s F 900 R and even Yamaha’s budget-conscious MT-09SP all brandishing one as standard. The two-way unit works flawlessly when you’re up it but lacks the finesse of quickshifters from other marques like BMW and Ducati that are silky smooth at any speed.

The cornerstone of the 790 Duke was its frame which pumped maximum feedback through to the rider and allowed you to feel like you were comfortably riding on the edge with room to move. KTM has gone with the ‘if it aint broke’ mantra and retained the same frame for the 890. The new seating position throws more weight over the front wheel, which only increases the amount of feel sent back to the rider, inspiring even more confidence to push harder. KTM has also chucked a set of very sticky and almost-slick Michelin Power Cup 2 tyres at the 890 which keep you glued to the road and the feedback high. They do get pretty hairy in the wet, but you know KTM – always ‘ready to race’. 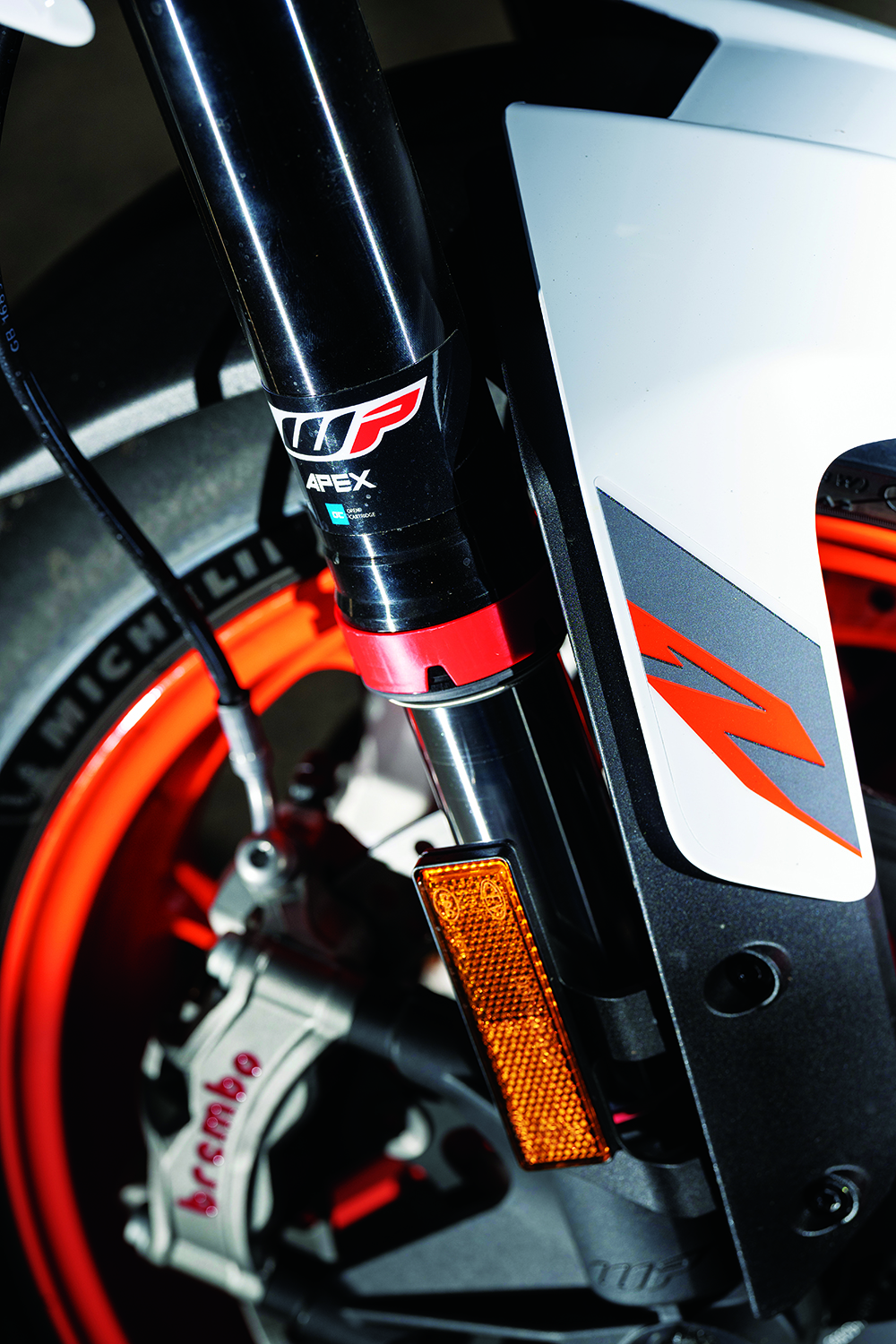 Arguably the single biggest and most important improvement over the 790 is the suspension. The 43mm WP Apex fork offers compression and rebound adjustment, although no preload which, for a heavy gent like me who would have benefitted from a touch more preload in the front, was disappointing.

Between the frame, trick new suspension, sportier ride position and a higher rider height means that you can get the 890 to turn just by looking at it. The 790 was easy to flick from side-to-side but the 890 is ridiculous. Whether tipping in, changing direction when cranked over, flipping the 890 into a turn is stupidly easy. 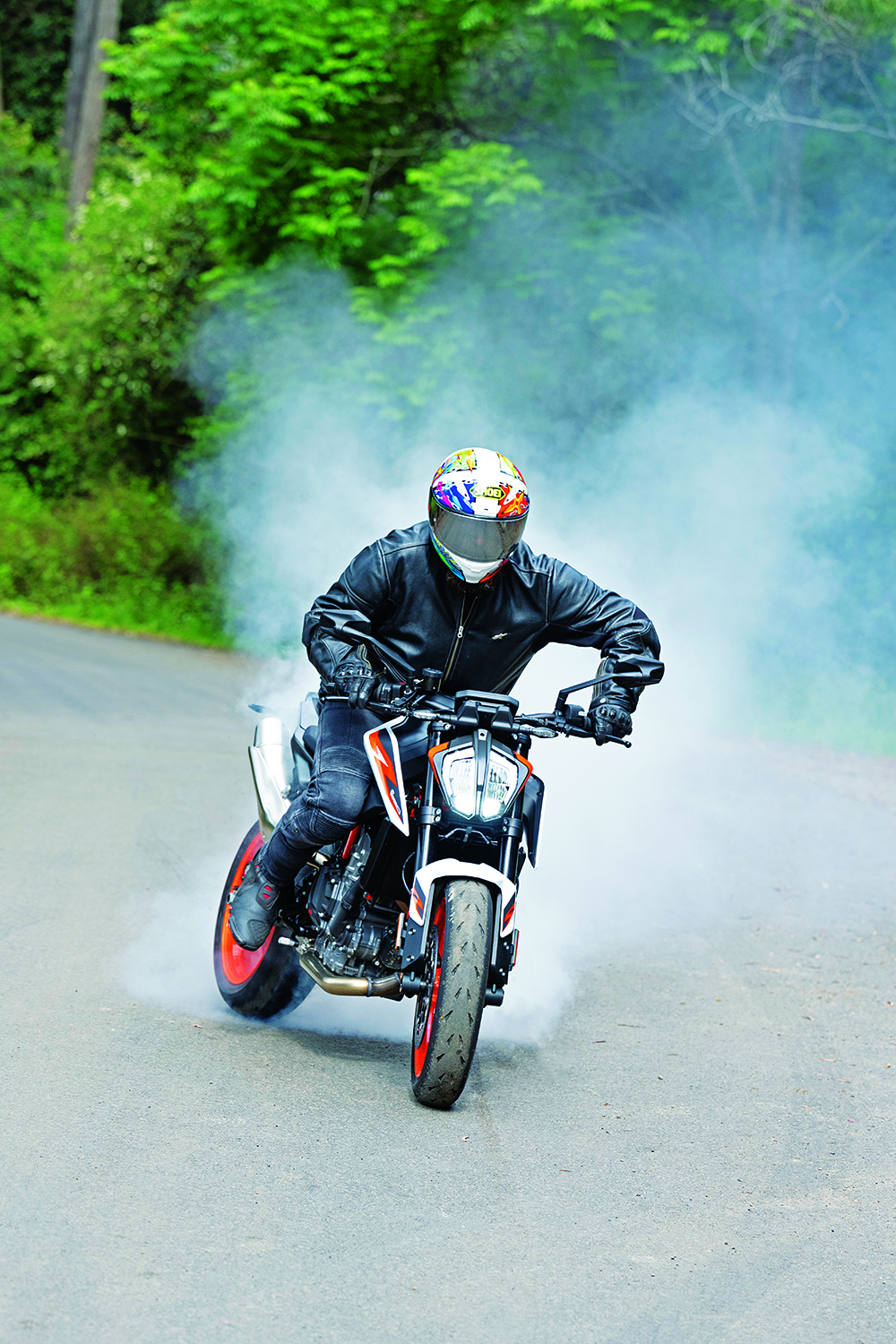 It’s a happy union between flick-ability and stability until you get into some really fast corners – think fourth gear pinned-type stuff – when it starts to feel slightly less planted.

On the main jet or not, the WP suspension was no less effective, soaking up snotty roads with aplomb, returning a smooth, controlled and comfortable ride no matter what. Unless you’re really heavy or really fast, they’ve got more ability and adjustability than most of us know what to do with.

The KTM-branded J.Juan calipers of the 790 have been replaced with yummy Brembo Stylema Monobloc affairs and MCS master cylinders, with a front rotor diameter increase up from 300mm to 320mm. They’re as good as anything available today on a production bike. I rode the 890 on the same day that I also rode a Ducati Panigale V4 S, which has stunningly good brakes, and jumping from the V4 S to the Duke required zero adjustment to riding technique or braking markers, two fingers is adequate and I’d describe the front as close to perfect as a roadbike gets. 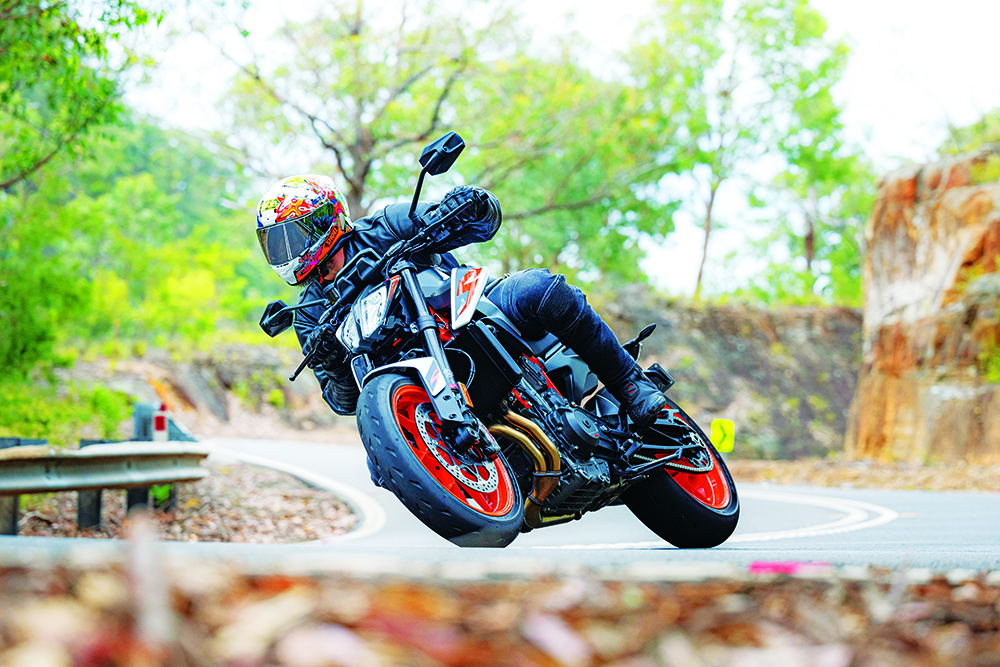 The rear single-piston Brembo grips a lone 240mm rear disc and has plenty of power but it lacks a little feel. I regard lane splitting to be a sport worthy of inclusion in the Olympics, I take it very seriously and a good rear brake is all important in the lane splitting game, so for that reason alone, I’d like a little more feedback from the bum brake.

There’s the familiar 4.3-inch brightly coloured TFT dash that runs on most smaller Katos these days, it’s easy to read and transitions from day to night mode automatically. The settings menu is easy enough to use, but could be slightly more intuitive. Backlit buttons are a nice touch and flicking through the menu day or night is a pretty painless affair. 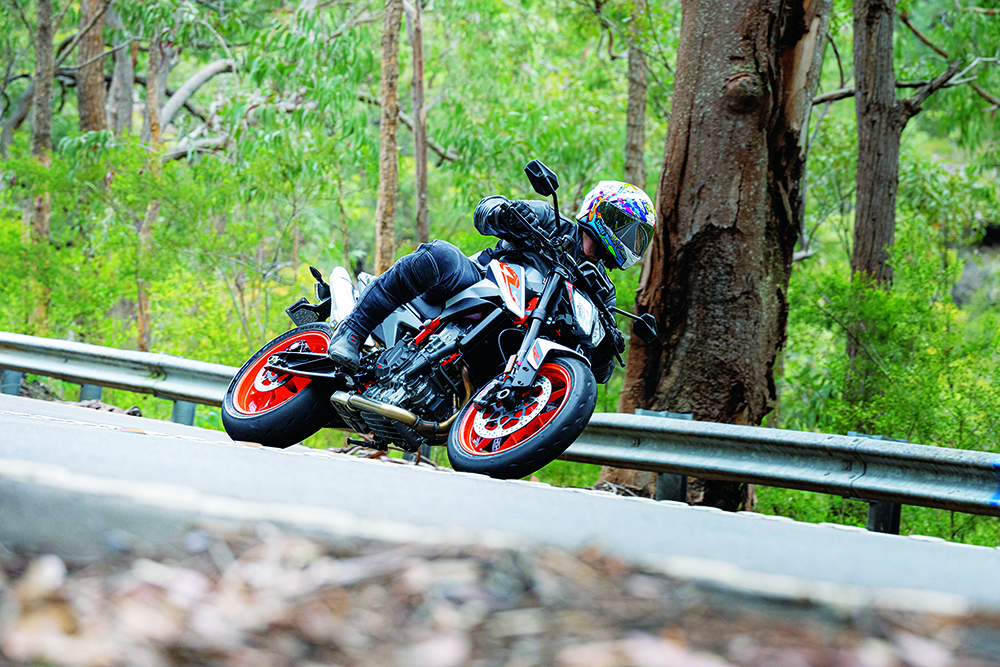 There are three ride modes to choose from (Rain, Street and Sport). You get full power with both Street and Sport mode, but Sport gives quicker throttle response and allows for some wheel spin. They’re nice to have and traction control comes in handy when things are slick – especially with those Michelins. But for most of the time, the 890’s engine is so smooth, and the fuelling is so lovely that it all feels a bit superfluous to the needs in all but extreme conditions.

But the 890’s ability to inspire confidence and encourage you to hit the next turn a little quicker or exit with just a bit more throttle, you can find yourself in what I previously referred to as extreme conditions. At this point, the six-axis IMU talks the lean-angle sensitive cornering ABS and traction control systems into letting you live if it turns out you’re not the cornering genius you might think you are. 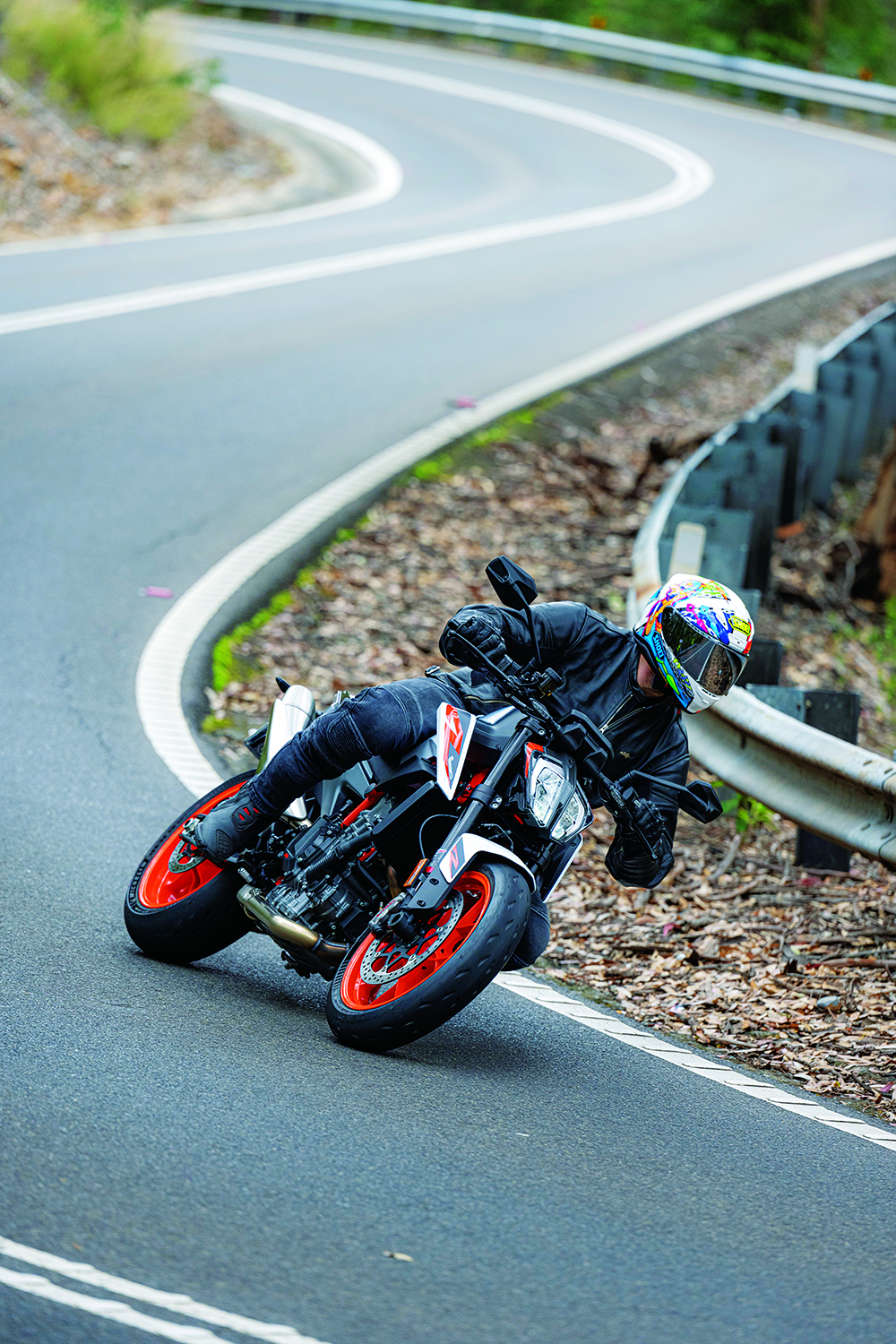 KTM’s objective in designing the 890 was to take all the good elements of the 790 and sharpen it up. Did they do it? Abso-bloody-lutely. And the design team should have received a bit fat goal-achieved pat on the back for its work.

But what’s it for? It’s for shenanigans! And that’s why I love it, I am still quite immature; ask my missus. If the idea of two wheel shenanigans resonates with you and you want a bike that corners as well as it goes, stops and wheelies then I reckon KTM has damn-near produced the perfect bike. I used to long for a 1290 Super Duke R, now I’m not so sure. 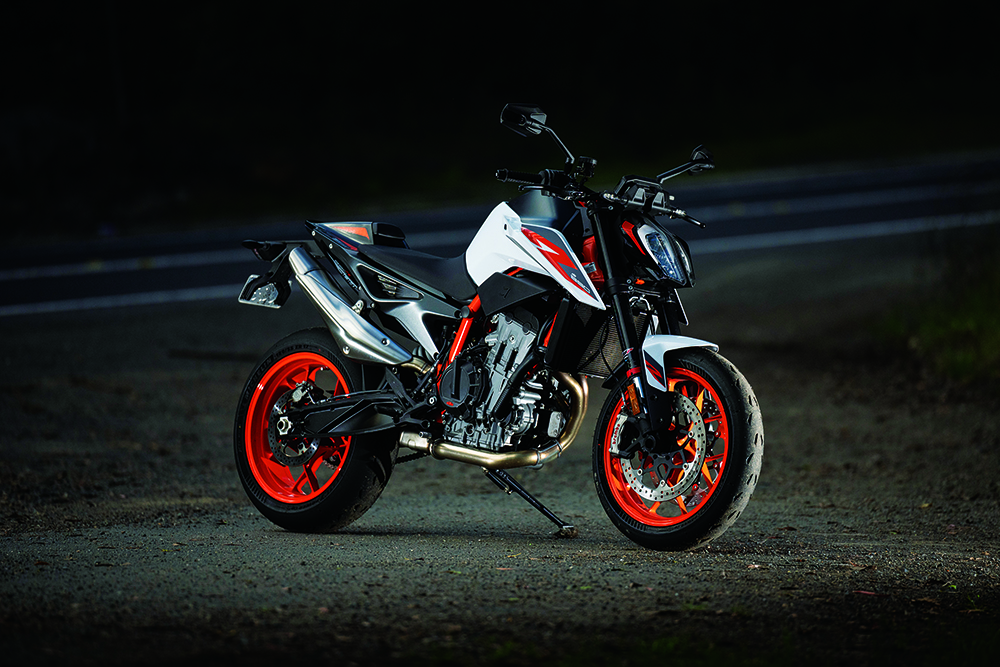