He has threatened a strong result on the Desmosport Ducati V4 R before, and now Oli Bayliss has broken through for a moving victory in race three at Hidden Valley, becoming the youngest ever winner of an Australian Superbike race which included the round win and a new lap record.

It was the first round held with the V8 Supercars since 2013 and the victory of Bayliss was a positive ending to the Darwin round, after several sickening crashes, including the serious incident that cancelled race two after Penrite Honda Racing rider Troy Herfoss impacted heavily with a concrete wall. The crash happened after a sudden high-speed front-end tuck that saw his Fireblade strike an air fence. The air fence lifted with the impact, with Herfoss still travelling quickly behind his motorcycle with no chance of escape. As AMCN went to press Herfoss is described as serious but stable, being treated at Royal Darwin Hospital with a badly broken right humerus and femur. 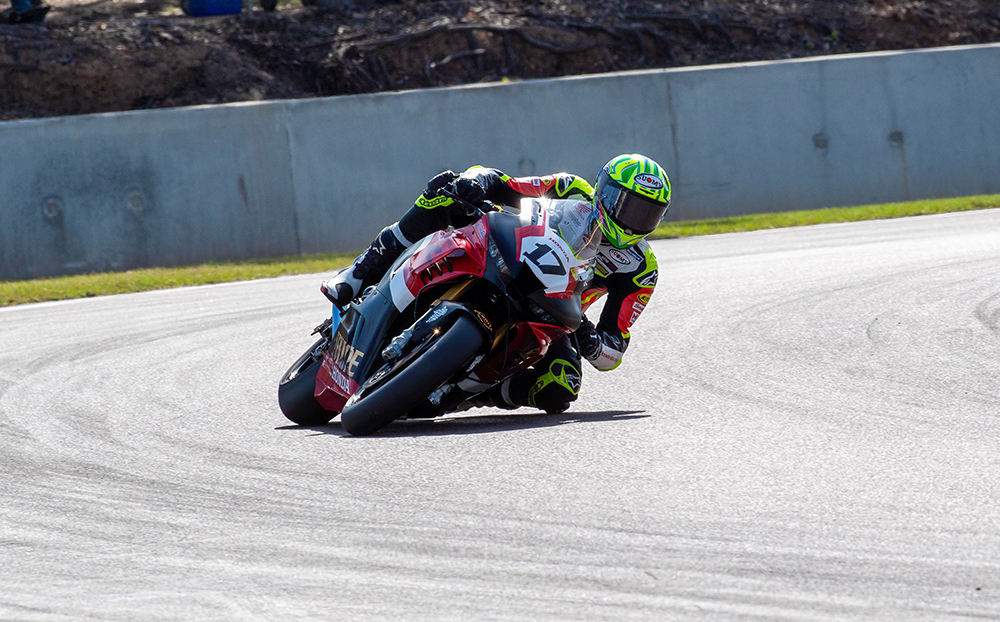 Prior to that incident, Hidden Valley had continued the season’s trend of smashed lap records as the Boost Mobile with K-Tech Ducati V4 R of Wayne Maxwell carved a four-tenths of a second chunk from the previous qualifying mark set by Troy Bayliss in 2018.

Oli also bettered the time set by his father, as did Desmosport Ducati teammate Mike Jones. Right on the pace was Herfoss in fourth, with Glenn Allerton close behind riding the new Maxima Racing Oils BMW M 1000 RR.

With three races to contest and a tight championship, the scene was set for high drama after the lights went out for the 440-metre run down to the first corner in the opening race, returning privateer and current Australian F1 Sidecar Champion Corey Turner (52 MotoSports) found himself in too hot, colliding with another returning privateer, Daniel Falzon (William Adams CAT). This pushed the Yamaha Racing Team duo of Cru Halliday and Aiden Wagner wide, relegating them to the back of the field. Out front, Maxwell had comfortably taken the holeshot and a lead group quickly formed behind him consisting of Herfoss, Allerton and Bayliss. Not far off the pace was Arthur Sissis (Unitech Racing) and Bryan Staring (BC Performance Kawasaki), with Sissis once again putting his trademark lightning start on display. 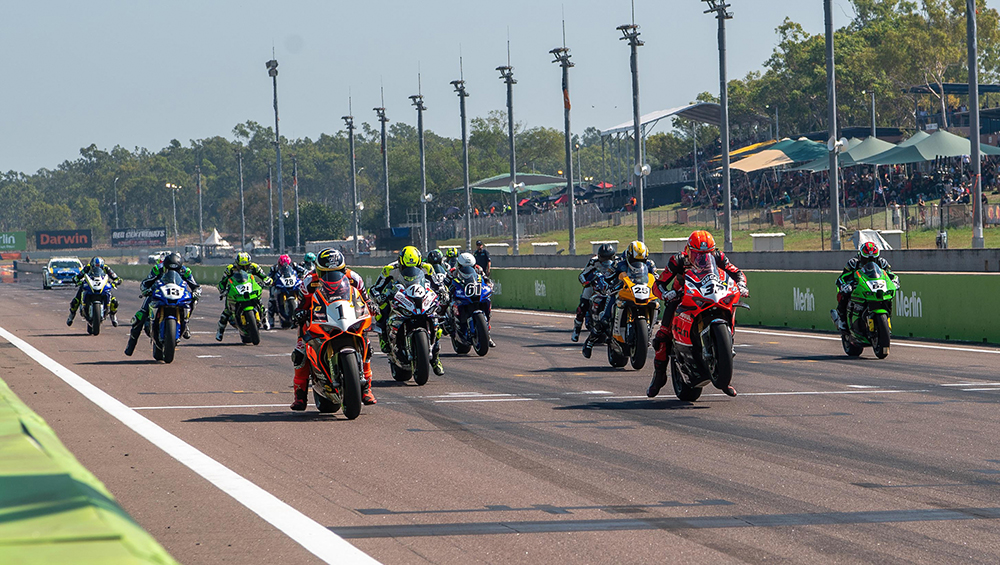 By lap five, Maxwell had broken the race lap record, with many expecting the Boost Mobile Ducati V4 R to start pulling away. Instead, Herfoss responded immediately by breaking the record himself with a 1m05.618s lap. Further back, Josh Waters (BC Performance Kawasaki) had moved ahead of Lachlan Epis (Maxima Racing Oils BMW) and Matt Walters (Kawasaki Connection), while Anthony West (MotoGo Yamaha) and Jed Metcher (Siemec) loomed close behind.

Bayliss looked to be settling into a good rhythm, moving past Allerton into a podium slot but his run was shortlived, running wide at the start of lap eight to concede the position and then struggled to find a clean line. Staring, down on horsepower riding the new Kawasaki, was starting to find confidence and put a nice move on Sissis under brakes to slot into fourth. 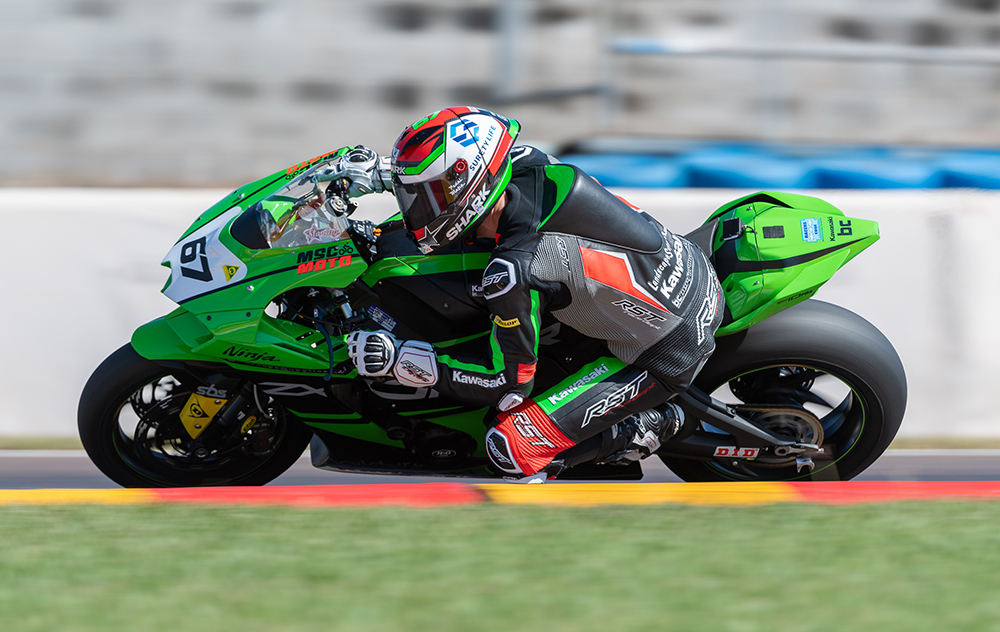 With three laps remaining, the leading pair of Maxwell and Herfoss were conducting a masterclass, ahead by almost nine seconds. Herfoss was applying pressure, but not quite showing a wheel while letting Maxwell know he was ready to pounce. As the final lap approached, Bayliss regained his composure to move back past Sissis and Staring, but the focus was on the leaders.

With two corners remaining Maxwell defended his lines, pushing as deep as he could to stave off a hard-braking Herfoss. It allowed just enough room for the Honda rider to slip up the inside. It was a brave move, so close that Maxwell almost had a chance around the outside – but Herfoss was home by six hundredths of a second in the sprint over the line. Allerton completed the podium followed by Bayliss, Staring and Sissis. West finished seventh ahead of Waters, Metcher and Halliday. In the aftermath of race one, Corey Turner was demoted three grid places for the turn-one incident while up front the rest of the field advanced a spot on the grid for race two after the withdrawal of Mike Jones. 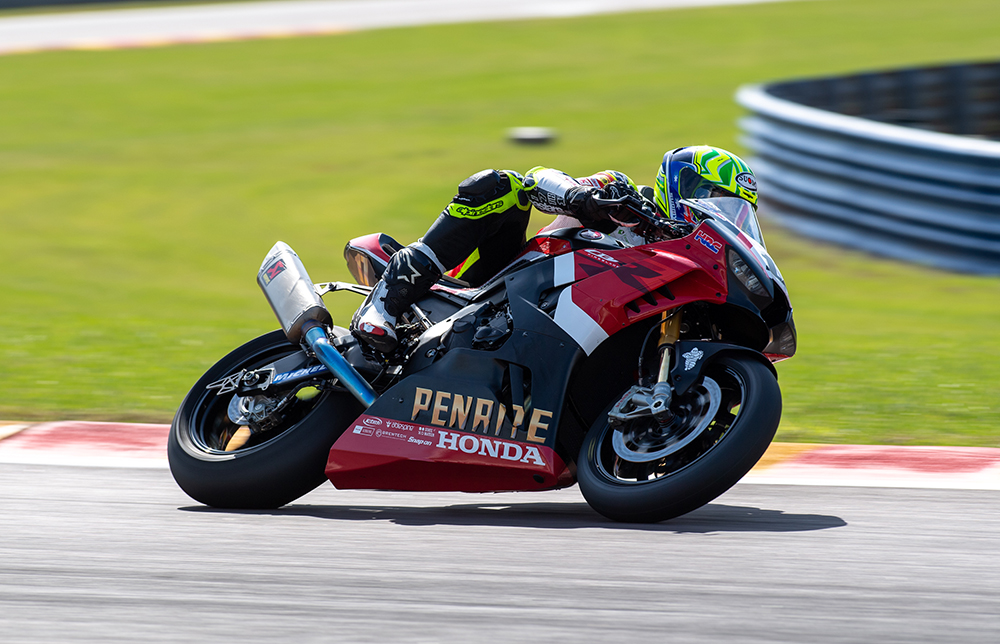 As the lights went out for race two, Maxwell took another commanding holeshot pursued by Herfoss and Bayliss, with Arthur Sissis once again making a stunning start to run fourth. Moments later, disaster hit. Herfoss, pushing hard, went down at speed. The red flag was immediately thrown, the race declared and no points awarded as Herfoss was transported to hospital.

Race three saw elevated temperatures but also elevated emotions, with riders’ thoughts with Troy Herfoss as they took the grid. Bayliss took the holeshot from a tentative looking Maxwell, leading until running wide at the end of lap two. Maxwell seized the opportunity and cut underneath him, with Allerton close behind and Epis in fourth. 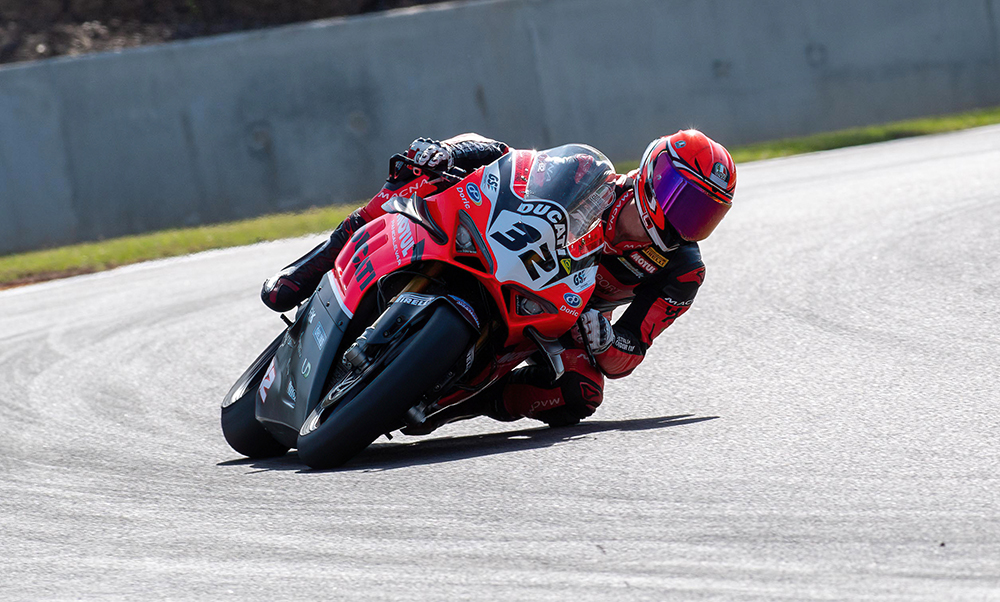 Further back in the field, Matt Walters was beginning his fifth lap, drawing alongside the factory Yamaha of Aiden Wagner down the long straight. In the instant he was entering turn one, Walters felt no response from his brakes. Aware of Corey Turner, Luke Jhonston and Jed Metcher to his outside, he instinctively pushed his Kawasaki to the inside of the corner. He impacted and launched over the curb, landing in the path of Turner. The luckless Queenslander went down as the machine of Walters cartwheeled through the air, somehow avoiding Turner’s head and the other bikes around them.

Incredibly, both were relatively unscathed although, after his 200km/h get-off, Walters will have plenty of work to do to get his ZX-10R back to race condition. The race was restarted and this time it was Maxwell who seized the holeshot from Bayliss, with an eight-lap sprint to decide the winner as Sissis and Allerton slotted in behind them. 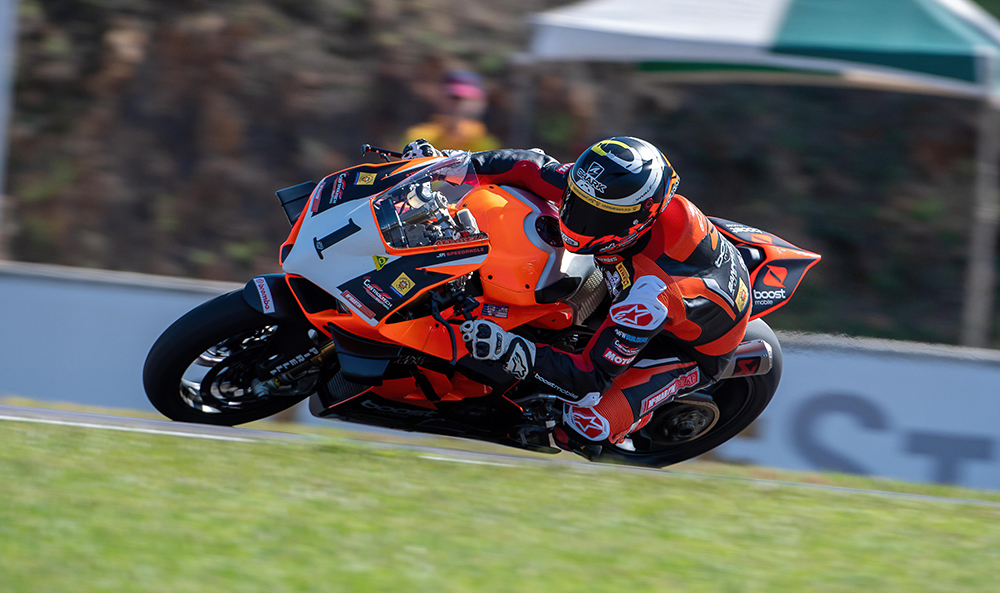 Lap two and Oli is still with Maxwell, trialing him in a similar way to Herfoss in race one.

By lap four Bayliss is still on Maxwell’s rear wheel and looked to be applying pressure, both riders becoming more deliberate and definite in their moves. Every corner drew more urgency as the flag approached, with Bayliss breaking the lap record on lap five.

At the start of the penultimate lap Bayliss made his move, not only making it stick but pulling a slight gap. One minute later he still held the lead, holding Maxwell at bay and defending solidly, all the way to the finish line, beating Maxwell by 0.171 seconds. In doing so, he became the youngest winner of a superbike race pushing the dominant and experienced Maxwell all the way to claim his stunning maiden victory. Allerton, plagued by clutch problems on his brand-new motorcycle took third ahead of Bryan Staring in fourth. 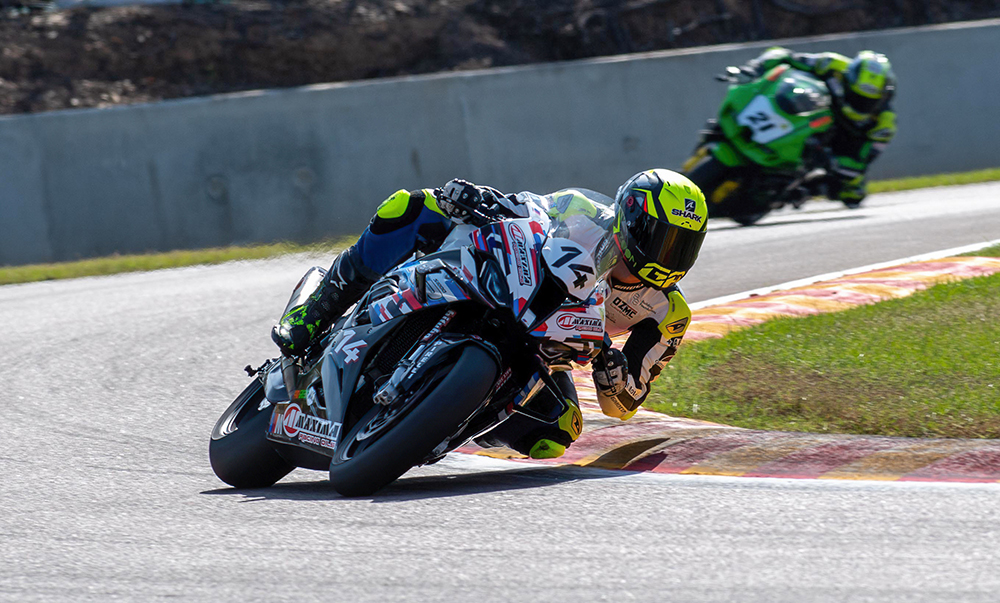 It was a positive result for Kawasaki, however they are still chasing horsepower with an engine that appears to be hampered by Euro-5 emissions compliance.

Falzon was the highest-placed Yamaha in fifth followed by Wagner. Commenting after the race Wagner said he had fully recovered from his bout of concussion and was completely focussed on finding an optimum set up with the Dunlop tyres. Anthony West made progress throughout the weekend with a 7-7 result followed by Waters, Halliday and Metcher to round out the top ten. The championship now moves to Morgan Park over 20-22 August. 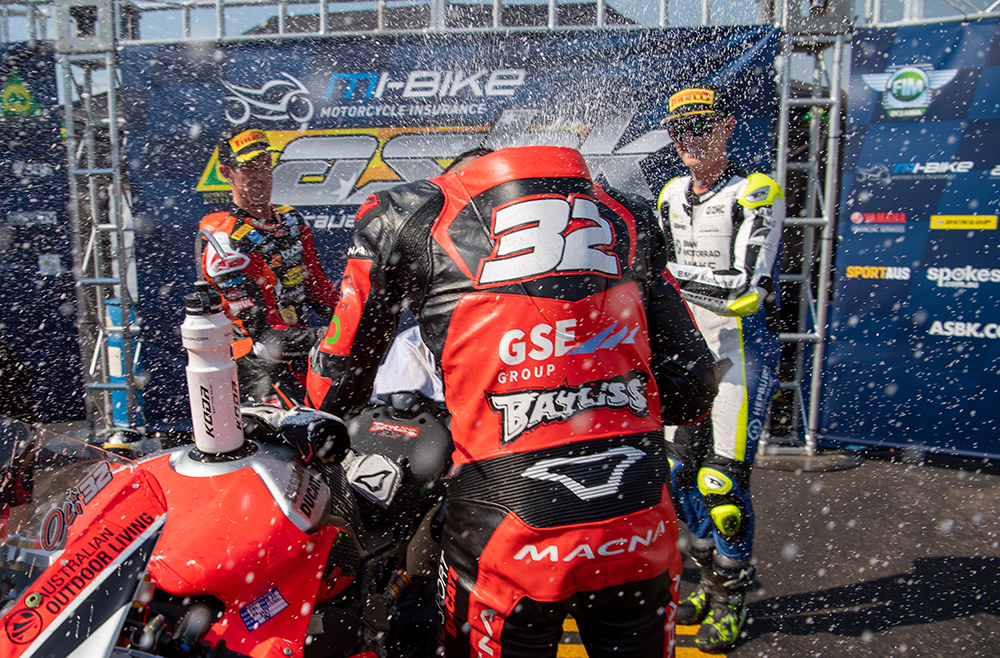 Standings after 4 of 8 rounds 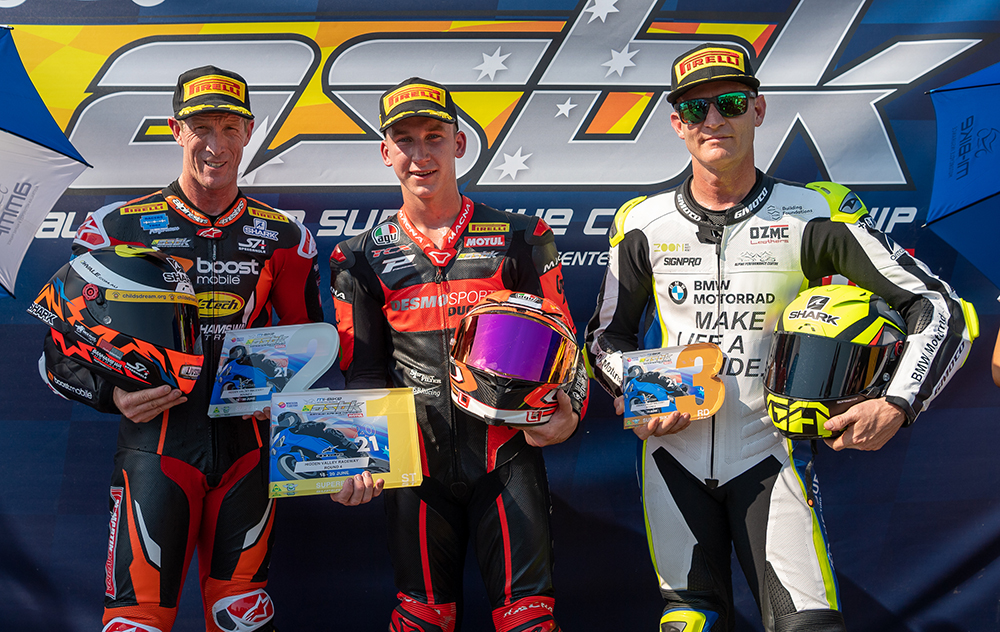