Benelli gets in on the novelty-sized motorcycle craze with the TnT125 – but can it beat the Japanese at their own game?

Would the difference between one single kilowatt of power and 99 bucks matter to you when it came to choosing your next motorcycle? It might when that one kilowatt represents well over 10 per cent of the bike’s total power. Those two figures are the difference between Honda’s 125cc Grom and its all-new European-branded challenger, the Benelli TnT125, which I recently spent a day sampling at the South Morang Go-Kart Track in Melbourne’s northern fringes.

For the sake of transparency, it’s important to declare I’m a very big fan of novelty-sized motorcycles. Not only do I own an original 1982 Honda Z50J, it’s by far the most prized two-wheeled piece in my ever-growing collection. You might recall a time when Benelli exclusively produced large-capacity high-end exotica from its Pesaro-based factory. There was the Tornado 1130 triple-cylinder superbike, the TnT 1130R nakedbike, even the 1130 Café Racer. But ever so quietly, and under the guidance of its Chinese owners Qianjiang which purchased the Italian firm back in 2005, Benelli has stopped producing top-shelf Italian-made finery, and started reacting more cleverly to the current-day market in a bid to future-proof itself. Its latest TnT125 is just another example of these new ways. Believe it or not, you actually can’t buy a new Benelli-branded motorcycle these days for more than about eight grand, or with a capacity of over 600cc. But don’t be fooled by the Chinese ownership. The bikes may be produced in the company’s Wenling factory, but they’re designed in Italy, quality control is overseen by the Italians, and there’s simply nothing on the current crop of learner-approved machines that gives away their country of origin, the sub-$3500 TnT125 included.

As you’d expect, a once-over of the specs sheet of Benelli’s newest pocket rocket is rather underwhelming. The TnT is powered by a 125cc air-cooled single-cylinder engine mounted in a steel-trellis frame. It rolls on 12-inch wheels and it tips the scales at 121kg ready to ride. Line that specs sheet up with its Japanese rivals, however, and the Benelli rises slightly in the whelm-realm. Most importantly when it comes to price. At $3250 (+ ORC), the Benelli is $99 less expensive than the Grom and $949 cheaper than the Kawasaki Z125 Pro. That starts to sound even better when you consider the Benelli’s got more poke (just), significantly more robust USD fork tubes, an extra gear, a combined braking system, two extra valves in its head and 24 months’ roadside assist. I could not get two feet flat on the ground of the Benelli Tnt125. There, I said it. But of course that didn’t matter – it’s just like every single motorcycle I’ve ever ridden (except my seat-less trials bike). The point is it may look like a small and cute novelty-sized motorcycle, but its 780mm seat height puts it in the same league as, say, BMW’s jumbo six-cylinder K1600GT. Benelli’s target market isn’t novelty-sized humans, it’s fully grown adults, and so the company had to go to decent, er, lengths, in order to make the motorcycle accessible and comfortable for a wide range of owners. Not only that, but regardless of the size of the wheels beneath you, when you’re riding on the road you still need to possess a certain amount of presence to be seen and stay safe, regardless of how small and cute your motorcycle is.

The engine was everything I expected from an air-cooled 125cc single. To be fair, my test unit had a grand total of 35km on the clock when I jumped on board, and I did notice a substantially more freed-up and willing response from the machine I swapped to later in the day which had more kilometres on the dial. That aside, the engine felt slightly stronger than I expected and the bike was nimble around the tight go-kart track where short straights and decreasing-radius corners called for fewer gear changes and more neck wringing. 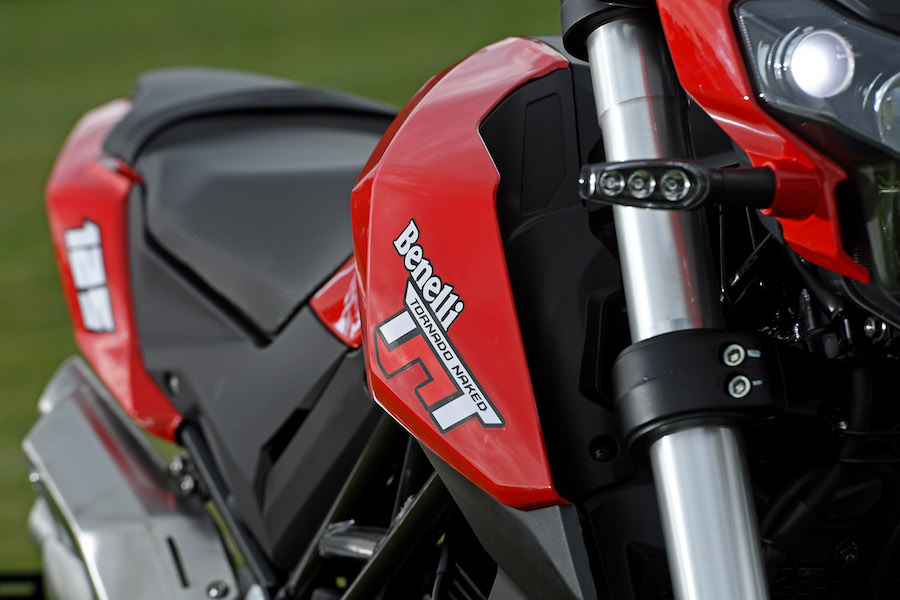 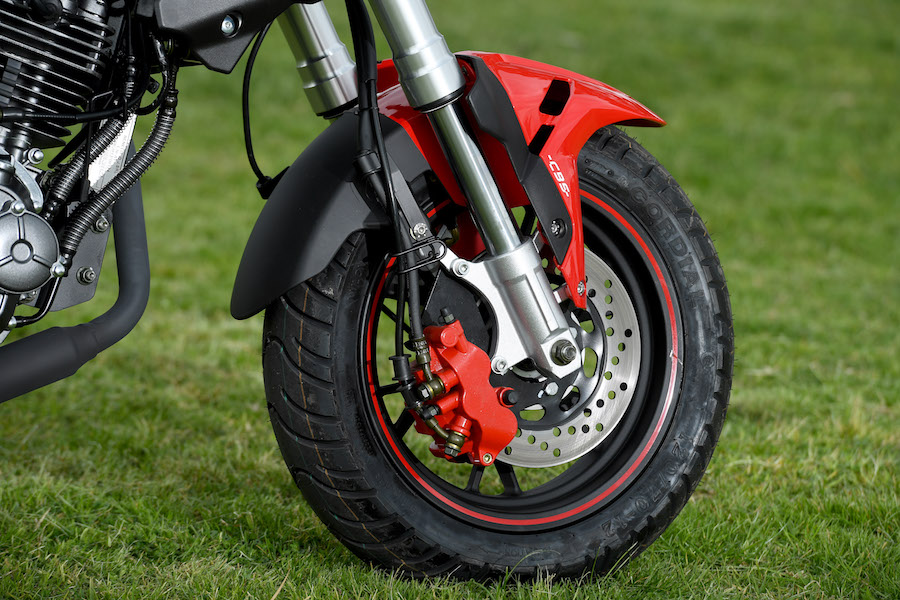 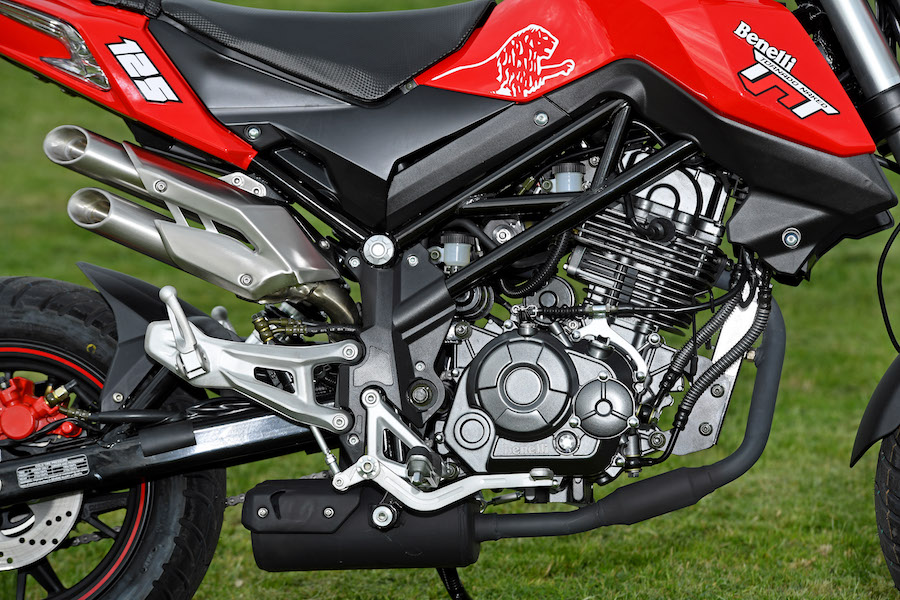 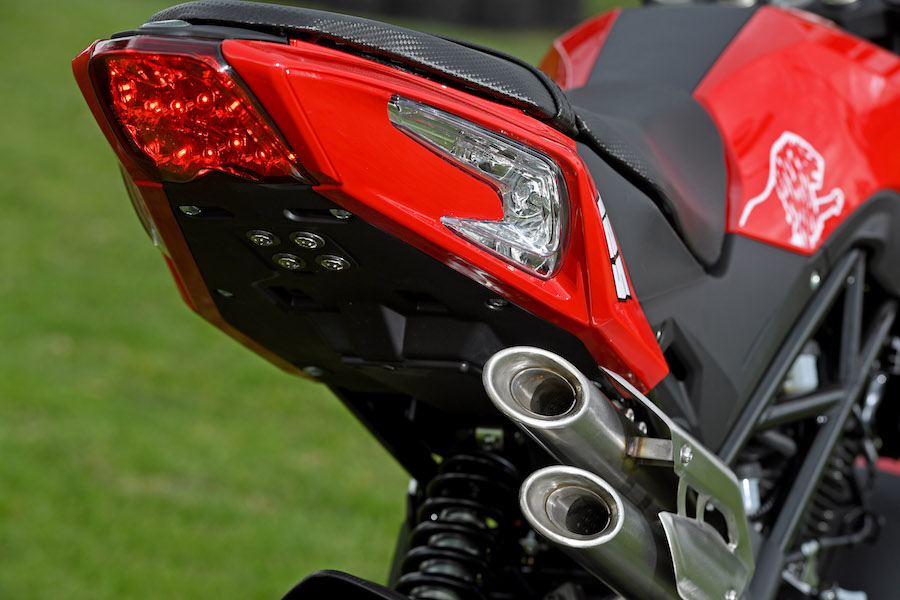 There’s no denying motorcycles and closed circuits are oodles of fun, especially when there’s a handful of your mates all on the same bike – one-make race series, anyone? – but after scores of laps of the sub-one-minute go-kart track in both directions, there’s only so much you can learn about a machine and its capabilities. So I found a fully-grown man and convinced him to pop on the novelty-sized pillion pad behind me for a few more laps and, frankly, the little Benelli pulled it off rather convincingly. Sure, my speed at the end of the back straight was 10km/h down on my previous best of 65km/h, and my lines weren’t as tight as they probably should have been, but what started out as a funny idea for a sight gag left me and the bloke on the back quietly impressed.

Nobody in their right mind is going purchase this bike for its two-up capabilities, but capable it is. If there was the odd time a would-be owner needed to pillion someone somewhere through a built-up area where the speed limit is less than 80km/h, the TnT125 would have less qualms about it than the passenger would. Free of my pillion, I swapped the bike from race trim to road (I reattached the mirrors) and headed out into the big bad world to experience life in a bustling city aboard a novelty-sized motorcycle. And it was here where the Benelli TnT125 made the most sense – after all, this is where it was designed to be.

I was sitting high enough that I could still see above the traffic. I didn’t feel vulnerable, and I honestly thought I would. I took off far quicker than cars at lights, and I didn’t think I would. The TnT might only boast 8kW of power, but remember it only weighs 120kg. I saw 109km/h on the speedo – I certainly didn’t think that would happen – and I ran out of road before the bike ran out of go. It handled well, wasn’t too vibey, and stopped as quick as I’d ever need it to. The suspension was more than up to everything I asked of it; it was predictable over the rough stuff and didn’t bottom out through the deep potholes I deliberately hit on the back roads.

As I rolled back into the circuit’s driveway, I concluded that I’d happily commute on this bike every day. It’s cheaper than a year’s worth of train tickets, it’s the epitome of efficiency, and it’s a fun little talking-point addition to any garage. But most importantly, the Benelli TnT125 would turn an otherwise boring straight-backed commute into an every morning and every evening hoot! Look hard enough and you’ll be amazed how many novelty-sized motorcycles are available on the market these days. A few decades ago it was a segment more or less owned by Honda. Yes, there was the Kawasaki KV75, and Harley-Davidson even had one called the X90, but think so-called Monkey bikes and it’s Honda’s Z50, Dax and Mini Trail machines that come to mind. Honda was also the first to return to the market segment recently with the release of the Grom 125. It was closely followed by Kawasaki with its Z125 Pro. Braaap released a version, as did a handful of Chinese companies, but Benelli is the first of the European brands to jump on the bandwagon, and the execution is stellar. Here’s how the main players stack up.