To most of us, the name GasGas evokes images of nerveless trials stars bouncing seatless machines from rock to rock, defying sense and gravity, and generally existing on another planet to road riders.

But that image is changing fast. In 2020 GasGas set out to relaunch its brand, moving away from its niche off-road market and into MotoGP to contest the Moto3 championship. Following dramatic success at the famous Dakar Rally last January, the factory raised its profile further by badging Jake Dixon’s Moto2 Triumph-powered Kalex as a GasGas. And now GasGas has launched its first production roadbike, the SM 700.

The mover and shaker behind the transformation of GasGas is parent company PIERER Mobility, which also owns KTM and Husqvarna, meaning it should come as no surprise that the ‘new’ SM 700 supermoto shares just about everything with the KTM 690 SMC R and Husqvarna 701. In fact, the 693cc 55kW (74hp) single-cylinder engine is identical, as is the fully adjustable WP suspension and trellis frame.

Singles aren’t for everyone but they are slim, relatively simple and, crucially on a scratcher like this, narrow and light. The LC4 motor weighs just 43.5kg, including the starter motor, throttle body, clutch and coolant hoses. It’s ride-by-wire, of course, and supported by two riding modes: Street and Supermoto, which are really simple to use. Each mode reconfigures the throttle response and rider aids. A two-way quickshifter comes standard along with the must-have on all supermoto machines – a slipper clutch, which on the GasGas is hydraulically operated. 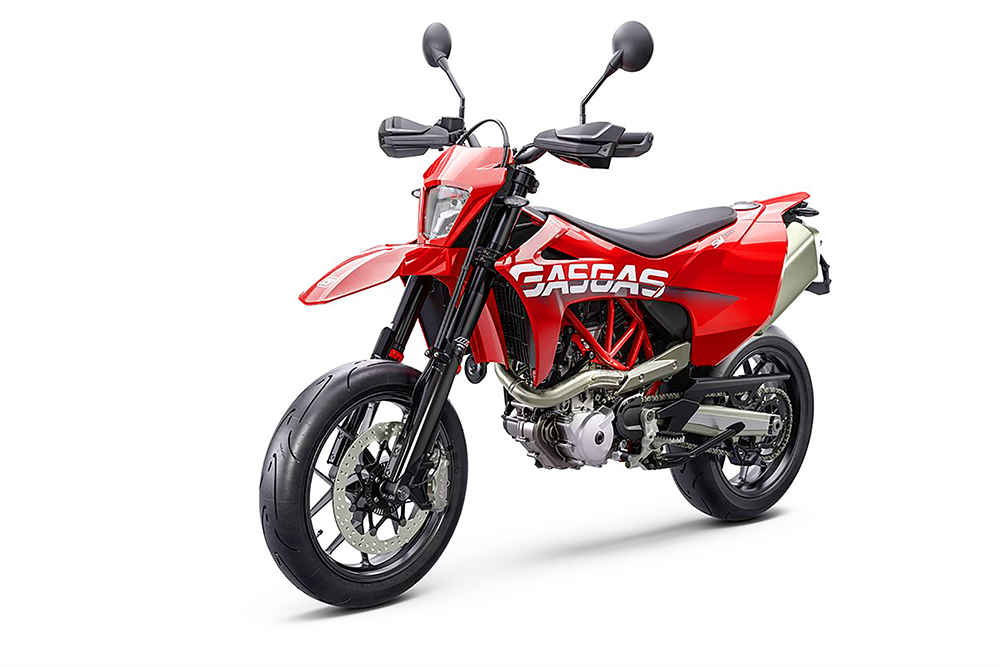 Don’t be put off by the single-cylinder engine. The LC4 is a sophisticated and versatile motor, and it’s electric start. The dreaded vibration associated with old thumpers has largely been eliminated and once above 2500rpm it feels smooth and free-revving for a single.

Below 2500rpm, especially in the higher gears, it’s a little lumpy but tap back on the quickshifter and it’ll pull cleanly. Short-shifting through the torque of the midrange is a truly fruity experience, and allows you to make quick progress on the road and embarrass most traffic away from the lights, too. Fueling is precise and smooth, another massive step forward from the single-cylinder bikes your dad used to tear about on, and while vibrations are noticeable they are anything but intrusive at cruising speeds. 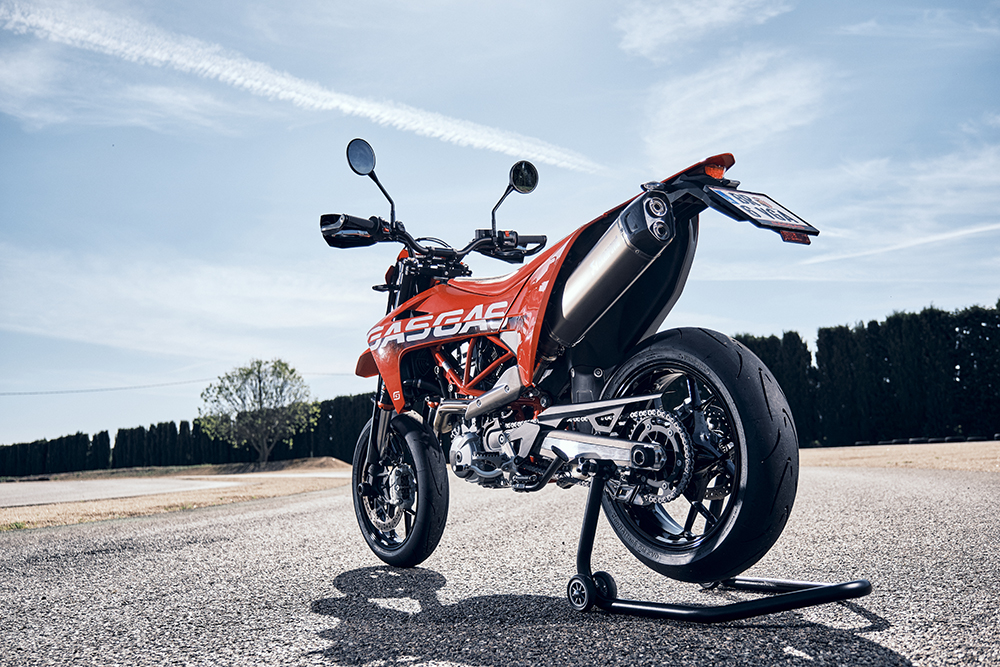 But the real difference is this. You can also thrash the GasGas and have some serious fun. It’s been a while since I’ve ridden a modern single, and it took me a few kays to stop short-shifting and let it rev its head off instead. On the track you can hold onto a gear for longer than you’d expect, occasionally bouncing it off the rev limiter between corners, and the GasGas seems to love it. Tuck down behind the wide Supermoto ’bar and it will breeze past an indicated 160km/h and onwards… plus a little more.

Yes, 148.5kg (dry) plus 55kW and 73.5Nm should equal some serious fun. Add fully adjustable WP suspension and Continental Attack SM rubber on 17-inch wheels and it’s clear we’re not to spend too much time riding upright on the SM 700. But first, some riding tips… 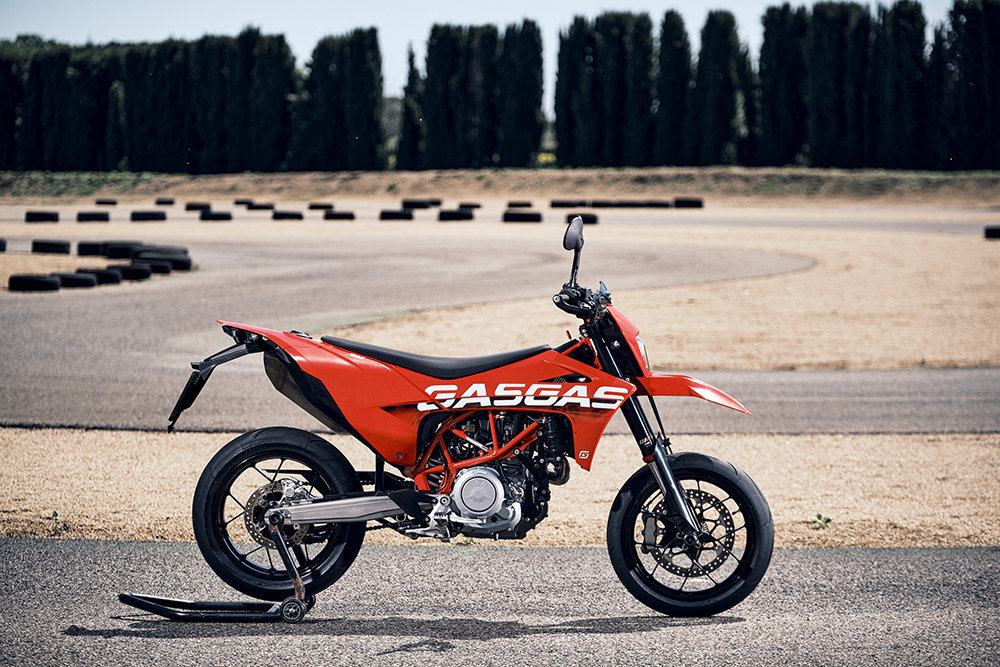 There are three ways to ride this thing. Conventionally: sitting still on the racy seat and using the single’s pleasing dollops of torque, which feels a bit lazy on a bike this intense but is a great way to revel in its chassis’s responsiveness. Secondly, in a traditional supermoto style, with weight forward, inside leg out, braking later than late, sliding the rear to the apex as you push the bike down into the corner before turning and firing out.

Or, as my GasGas instructor, MotoGP legend Sete Gibernau advised, knee down; as if on a normal sportsbike at a trackday, with your weight off the inside of the bike, knee skimming the kerb before pushing the bike upright on the exit. 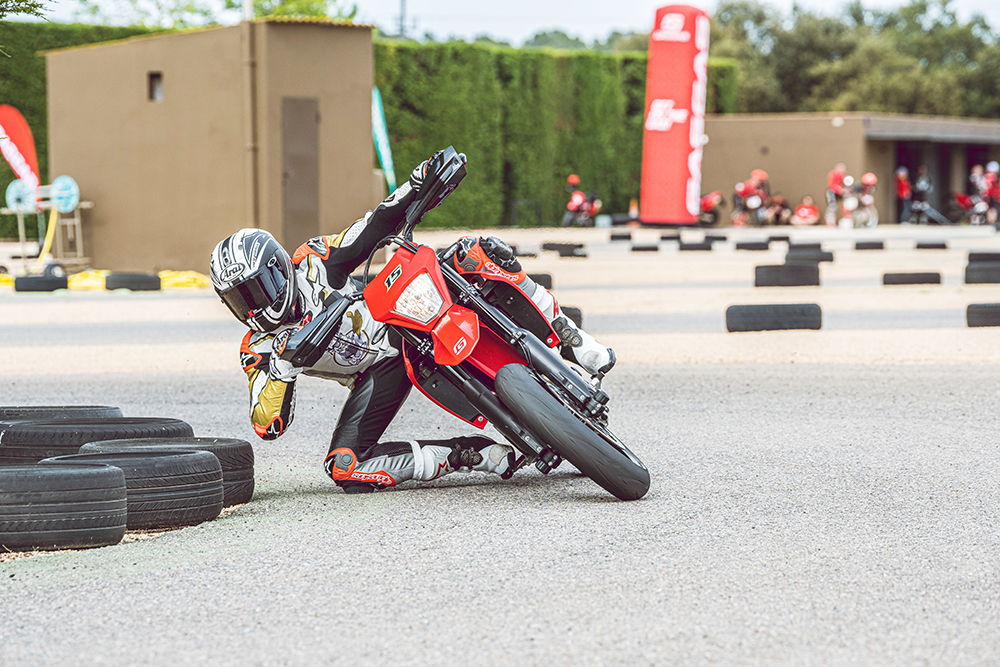 And the GasGas loves all three. Ride ‘conventionally’ on the road, then get to the track or even a fast switchback mountain pass and hit it supermoto style or knee down.

If you like intense bikes like this, all approaches are totally absorbing. The GasGas steers so quickly, is so incredibly light compared to normal bikes, that it takes a period of adjustment to get fully onto its wavelength.

That wide ’bar works like a long lever and makes the steering super light as, in all probability, do the SM’s cast wheels, which are lighter than the spoked rims on the KTM and Husqvarna. That said, they are only a fraction lighter and mainly there for looks. 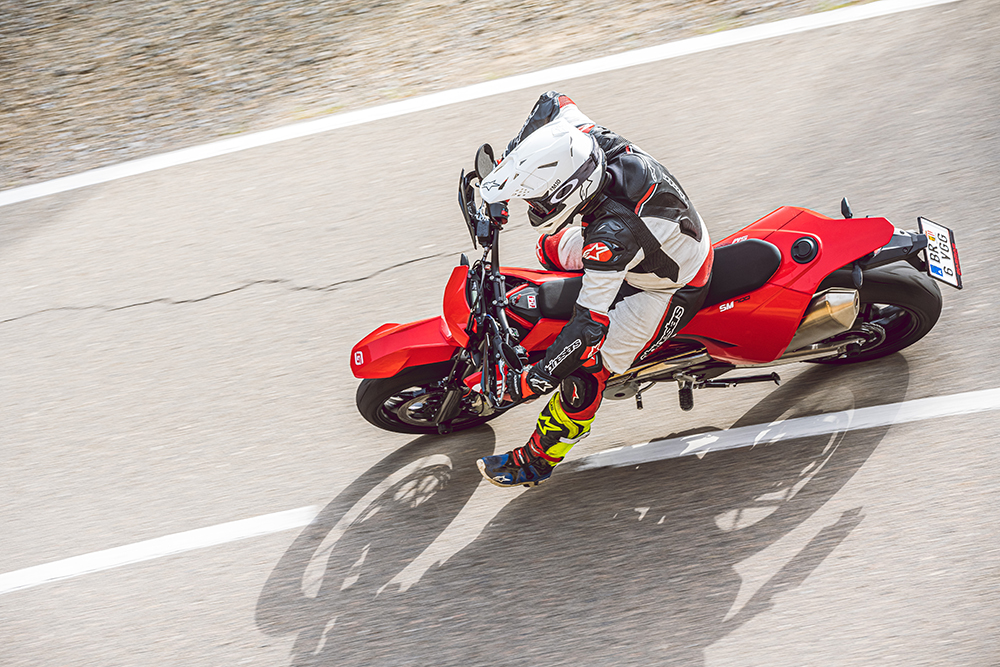 The SM 700 is beautifully set up, too. On the racetrack we didn’t need to adjust the fully adjustable WP suspension and didn’t even drop the tyre pressures; just rolled onto the private racetrack (at Sete’s house, by the way) and had fun. A tight and twisty track is where the GasGas truly shines – it’s brilliant at relatively low speeds. You’re not wrestling 220kg, just riding a bike that wants to get you into and out of the next corner as quickly as possible. And after a 20-minute track session, instead of feeling drained, you’re keen ready for another.

This was my first time on the Continental Attack SM tyres and they were faultless on the road and track. Even when the ’pegs started to tickle the surface, I still felt confident in the grip and feel. And while the SM 700 generates superb mechanical grip, there are also excellent rider aids to fall back on. Traction control and ABS are both lean-sensitive in Street mode. In Supermoto mode, the TC will allow a small slide, and the ABS is active on the front wheel only. Use the bike’s torque, get on the power early, the chassis (and TC) finds grip and propels you forward, darting away from the apex like a greyhound after a rabbit. 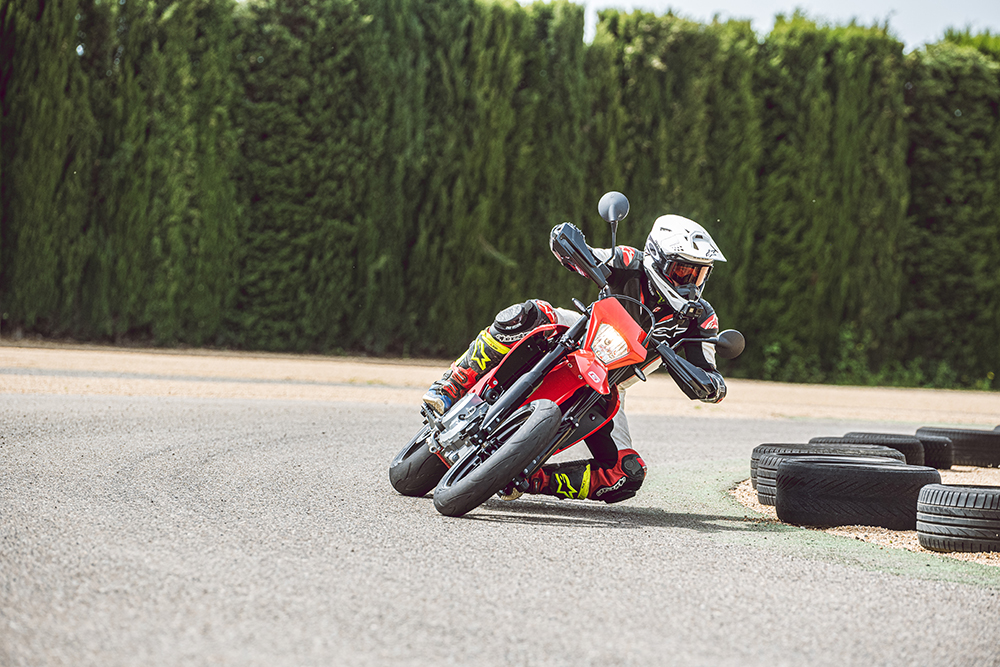 Braking is looked after by a huge 320mm disc and Brembo four-piston monobloc caliper, which do the job nicely, supported by the Bosch cornering ABS system – a vital part of the package given that we’re not all supermoto experts. The added safety of the corning ABS gives you the confidence to brake hard and deep to the apex, while selecting Supermoto mode disengages the rear, allowing you to drift into corners (or just pull big skids). Away from the track, the stoppers have a lovely feel and an adjustable lever. Again, the lean-sensitive ABS will come in useful in mixed conditions, and when carving up city traffic, which the GasGas will do all too easily.

Each mode gives full power but with its own throttle map. Cornering ABS and TC for the road in Street mode, and ABS just on the front and less sensitive TC on the rear in Supermoto mode. The front wheel will lift a fraction in Street mode, a foot or so off the ground depending on speed and gear. But for effortless wheelies you’ll need to opt for the Supermoto mode. Should you wish, TC can be turned off, but it can’t be trimmed – it’s either Street or Supermoto or off. Cornering ABS can’t be switched off either. 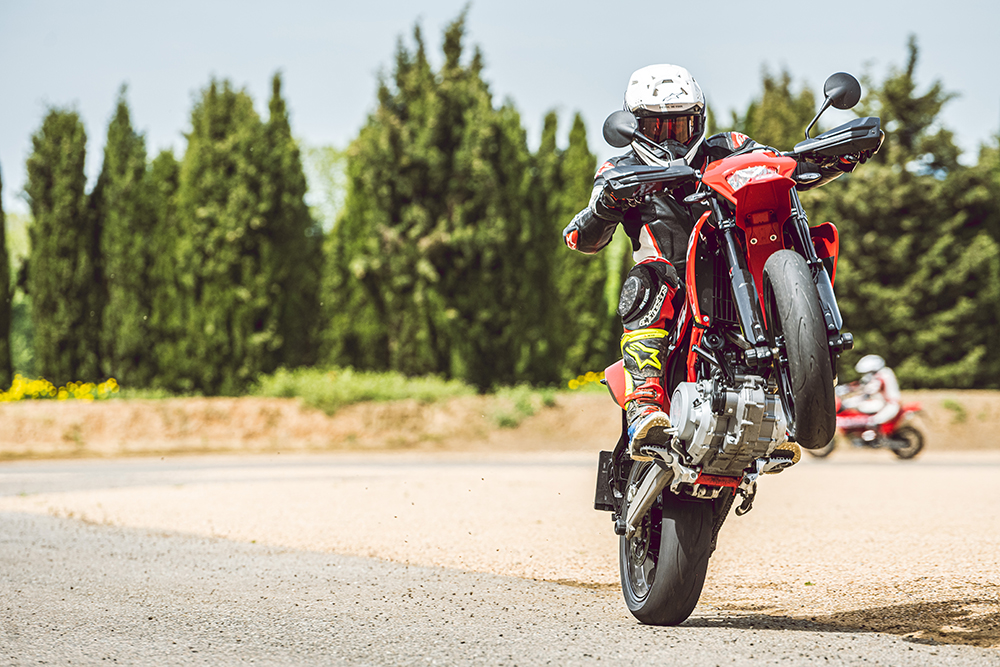 The only real downside to the GasGas is that, on track, it does take a little getting used to. You have to commit. If you sit conventionally in the seat and roll into corners, you’re asking a lot of the front WP fork and grip of the Conti rubber. Better to ride hard: brake heavily, get the forks compressed, turn while still on the brakes, and get the rear nice and loose. The GasGas will accommodate a leisurely ride, no problem, but if you head to a trackday, you need to get the supermoto-spec suspension working .

But there is a practical side to the GasGas. Service intervals are every 10,000km. Fuel consumption should be good with GasGas quoting 4.1L/100km, which from the 13.5L fuel tank (filled from the rear) will give a theoretical range of 270 kays. That’s around 230-odd kays before you’ll need to search for fuel. And, frankly, after 200km, or close to two hours in the thin saddle, you will want a break. 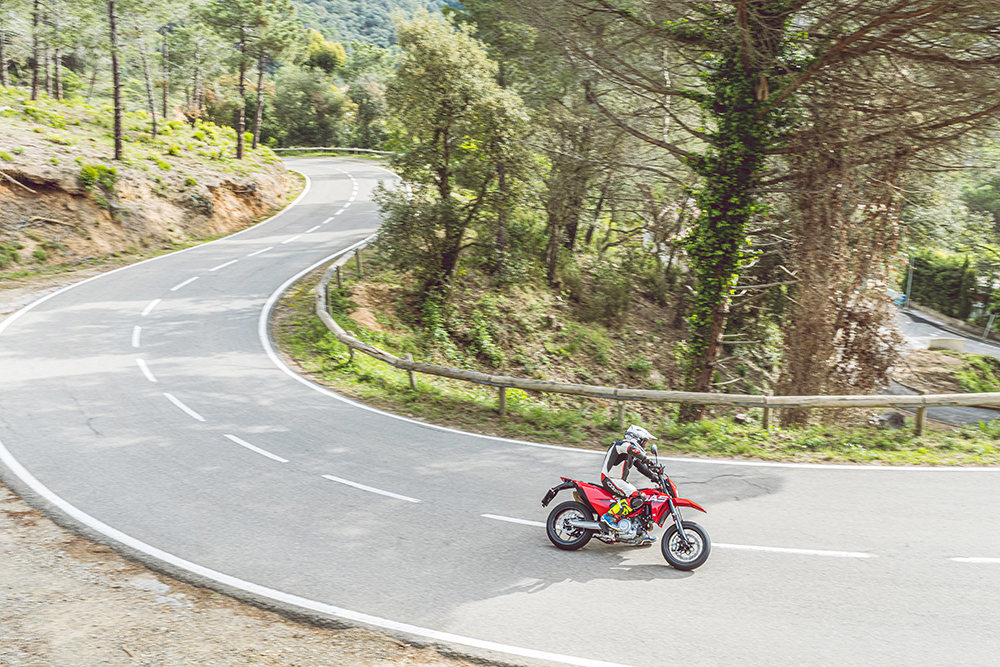 GasGas offers all the aftermarket goodies you’ll need for the track: handguards, crash protection, pit mat, tools and a choice of three slip-on exhausts. Away from the track, there are rear racks, smartphone brackets and an ergo seat.

Like its KTM sibling, the GasGas SM 700 is a hooligan bike with a slightly more practical side than its supermoto stance suggests. As well as lean-sensitive riders aids and a usable engine, it has a chassis that works both on the road and track. The elephant in the room is the fact that it is essentially a KTM 690 SMC R in red with unique styling and cast wheels, which don’t make a huge difference to anything except looks. 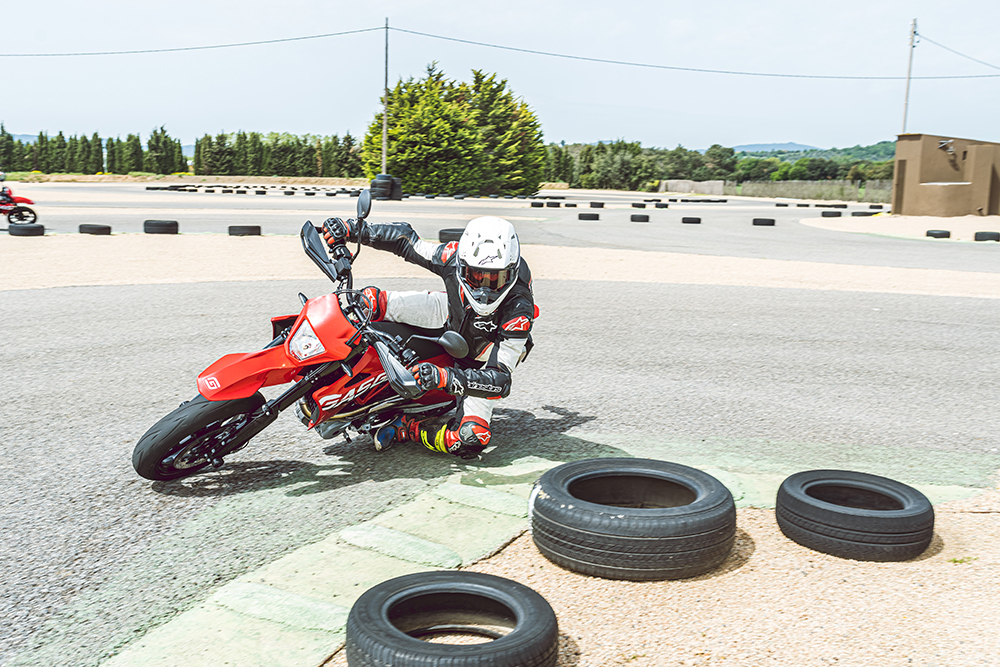 But copying the KTM makes perfect sense. It has the best, most powerful single-cylinder engine on the market, brilliant handling and a suite of useable rider aids that make supermoto riding more accessible to normal motorcyclists. Copying a bike that is already excellent, adding your own design twist, logo and culture makes sense.

For me it’s the perfect second bike, albeit a pricey one, to have in the back of the garage when you just want to have fun, and for that reason I love it.

And dare I say, I think I prefer red over orange. 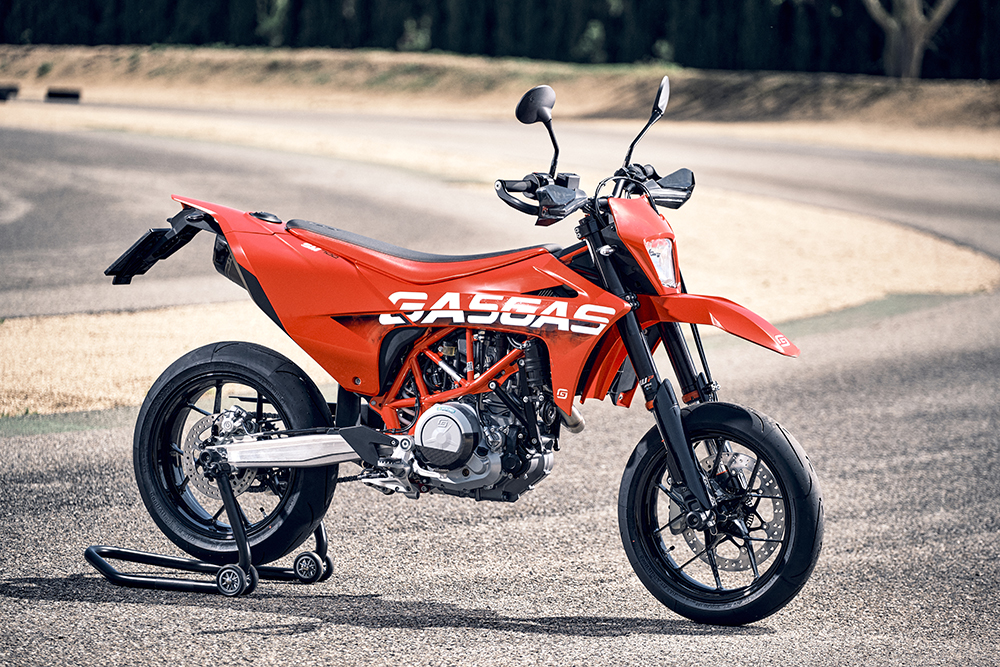 GasGas has also released the ES 700 Enduro. Yep, you guessed it, it’s very similar to the KTM 690 Enduro and Husqvarna 701 Enduro. The GasGas shares the same 55kW/73.5Nm engine, trellis frame, Brembo brakes with Bosch cornering ABS, and the same quality WP Xplor suspension. There are only two differences: the styling and the GasGas has a 15mm taller seat at 935mm. 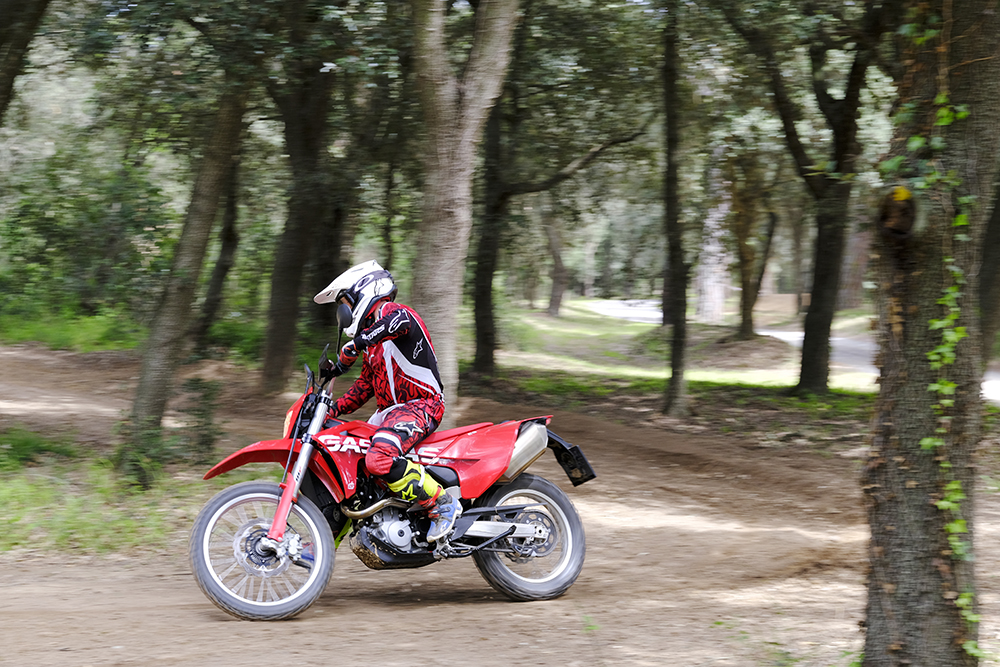 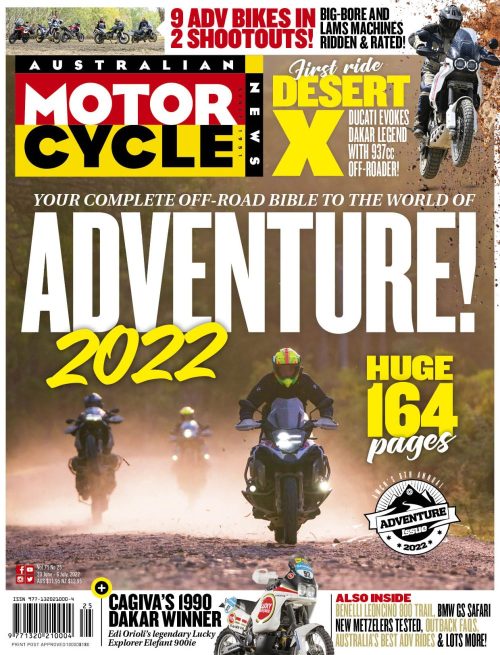 AMCN’s annual page-busting guide to what to ride, what to wear and where to go is on sale now.