With its unique looks and just-right performance, the KTM-based 2022 Husqvarna Norden 901 just might march to the beat of its own drum

We are spoilt for choice these days when it comes to adventure motorcycles. With offerings from so many manufacturers, it can be a very difficult decision when it comes to parting with your hard-earned cash on your dream go-anywhere bike. 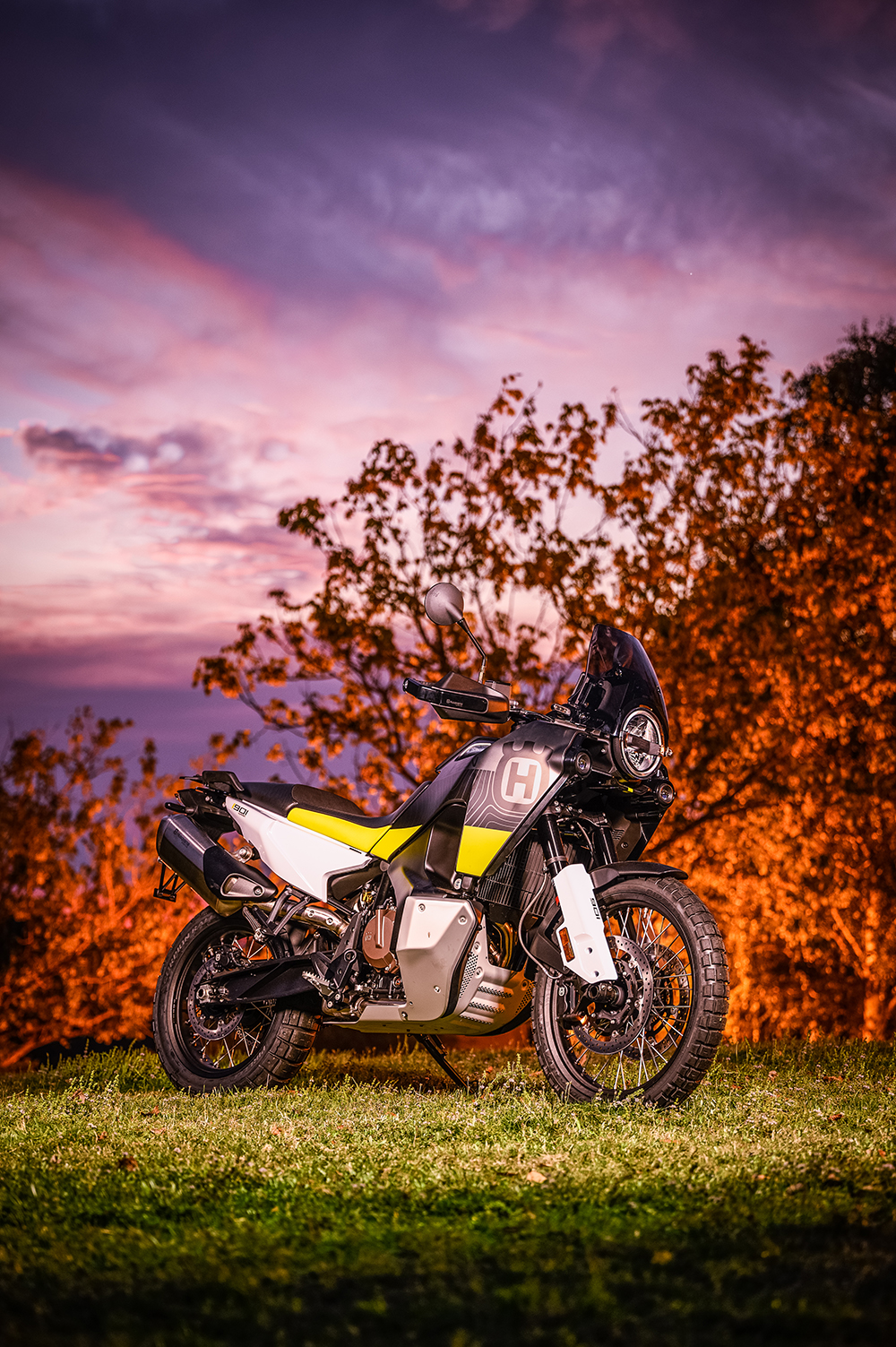 Husqvarna’s highly-anticipated Norden 901 is a bike that ticks a lot of boxes and is destined to make an impact on some of the front-runners of the current segment’s sales figures. It’s been a long time coming, mind you. Concept photos of Husqvarna’s first large-capacity adventure bike emerged even before Covid, back in November 2019; now it’s finally lobbed here in Australia. The good news though is it’s remained remarkably similar to the original concept that whet so many adventure appetites all those moons ago. 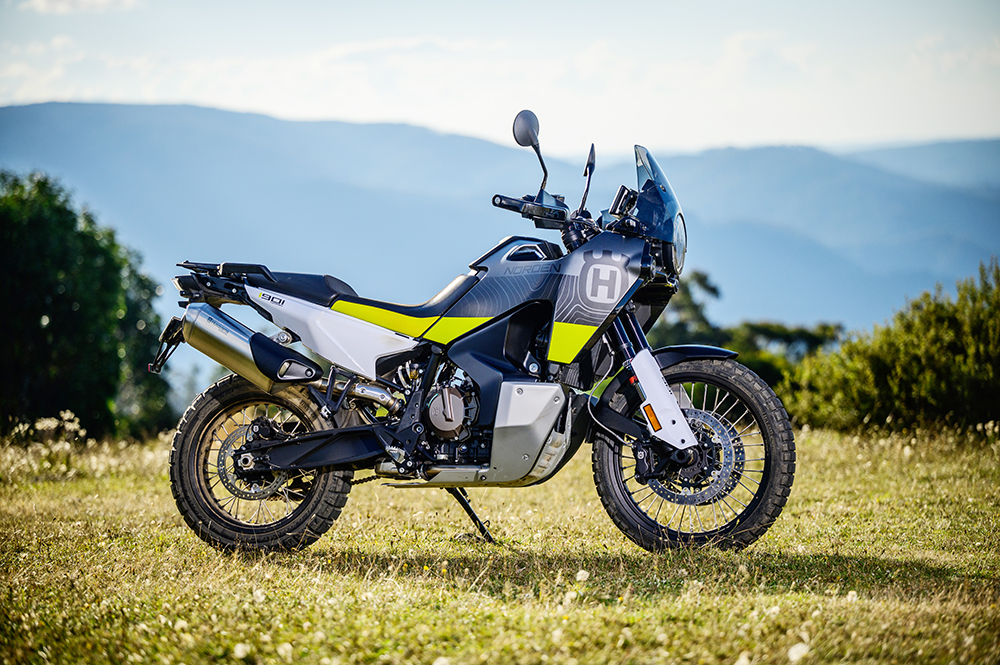 And in my opinion, it looks even better in the flesh. The level of finish is instantly apparent, and the overall design of the bike looks really well thought out, too. And while it’s powered by the same 889cc parallel-twin as both the KTM 890 Adventure and the KTM 890 Adventure R,
it’s positioned in the market smack-bang between the two. 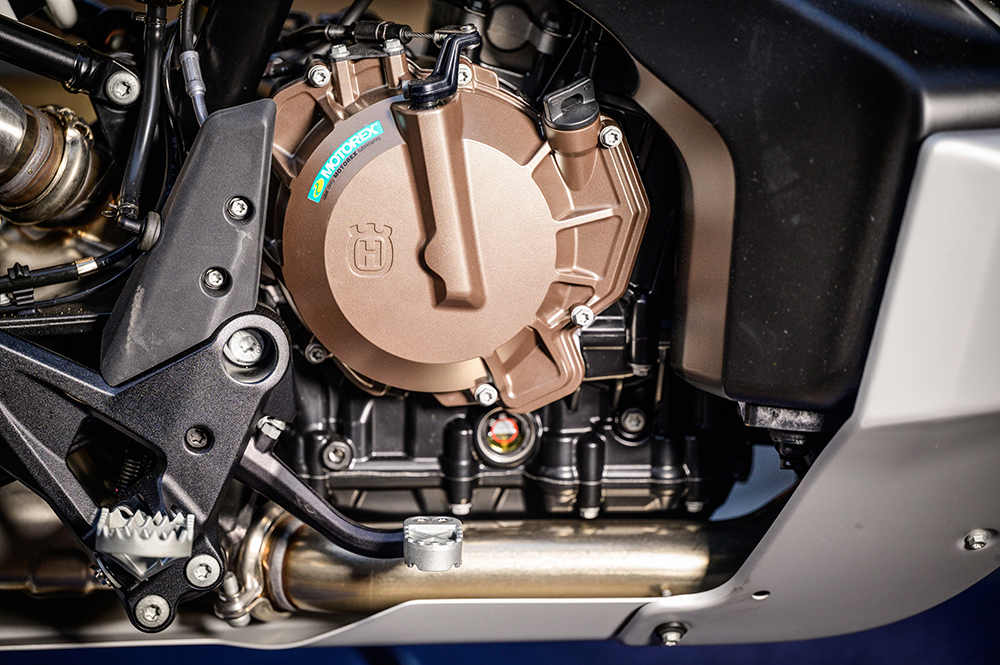 So with that in mind and with a planned route of 720km on both road and dirt over two days of riding through the spectacular Victorian high country, I was particularly keen to see if there was more to that than convenient marketing and just how well this Scandinavian-themed adventure bike could hold up in typically tough Australian conditions. 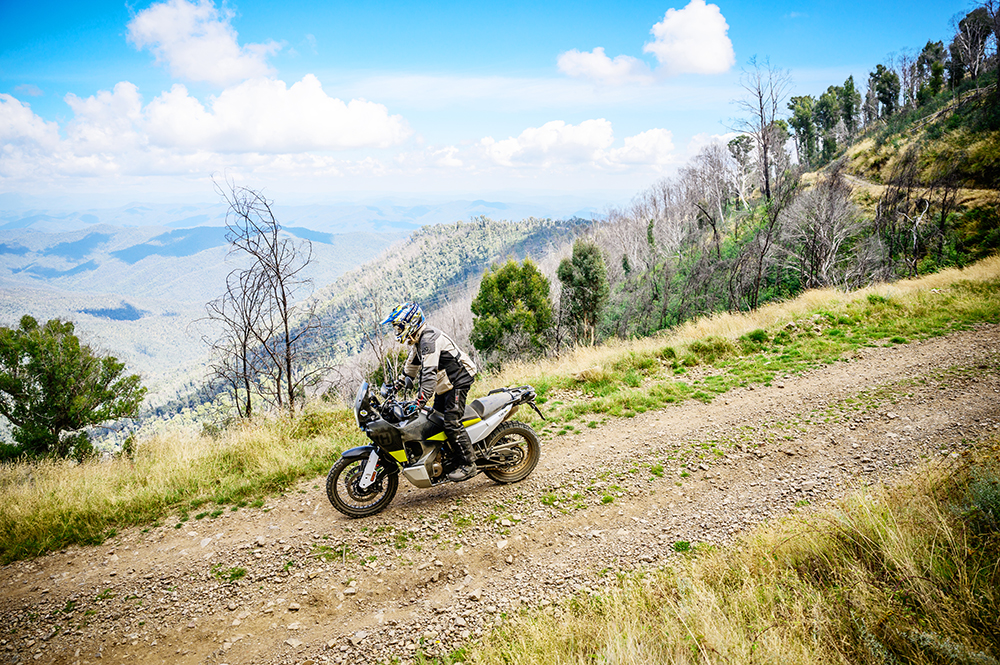 I generally feel instantly at home on big adventure bikes, and the Norden was no different. Shortly after leaving base we encountered some of the best roads I’ve ever ridden and it was now the Norden’s time to shine. The ergonomics are very good, the seat – which is two-position adjustable – is supportive and not once over two days did I feel any discomfort from it. 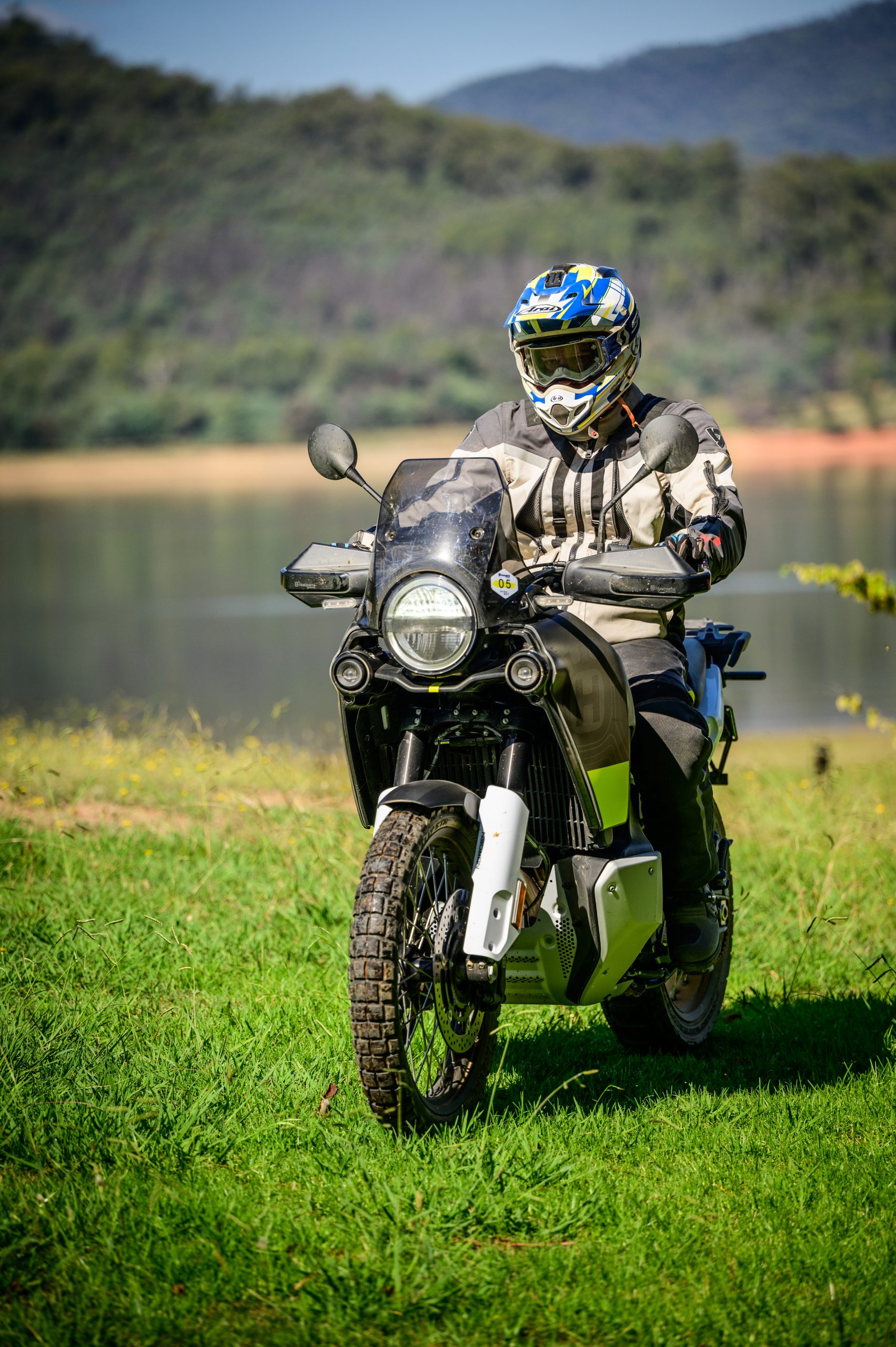 While 20mm doesn’t sound like much, I tried the 854mm seat in its higher position of 874mm. In the low position, you very much seem to sit more within the bike and, at 180cm tall, I found it very easy to get both feet flat on the ground. The higher position offers a more aggressive feel and when you’re riding off-road, it makes the transition between sitting and standing that little bit easier each time which adds up to less fatigue at the end of a long day. An even taller seat is in the pipeline, but has not been released yet. 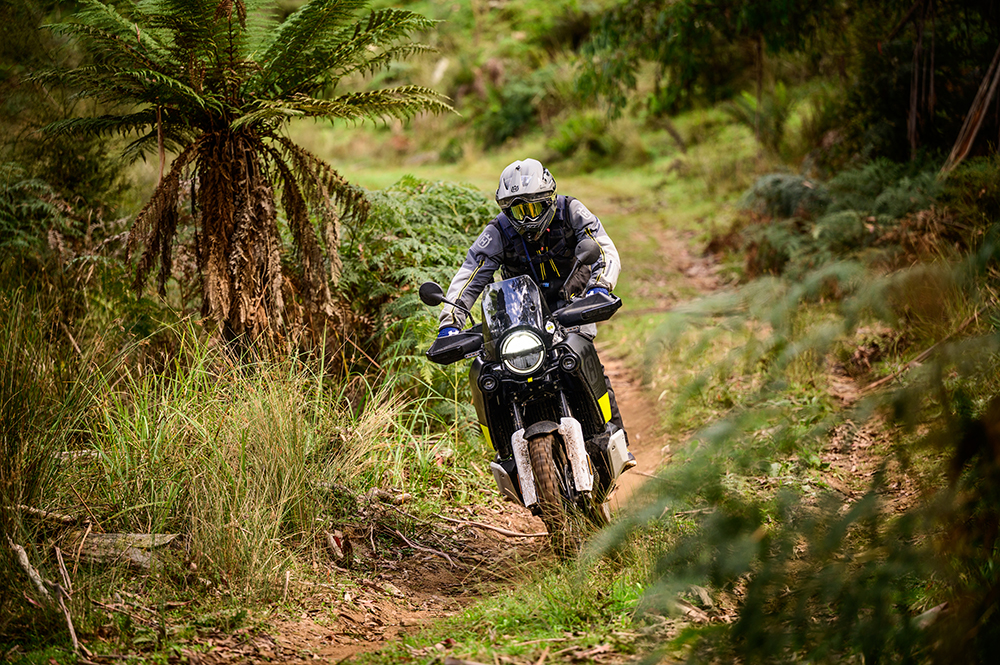 I didn’t try it, but the pillion seat looks like a relatively comfy place to be. It doesn’t look cramped and the trellis-style subframe looks very strong and more than capable of accommodating the somewhat endless choice when it comes to deciding on luggage variations. The tinted windshield does a very nice job of deflecting the majority of wind away from your helmet, but it’s non-adjustable, which is difficult to accept, given the bike’s premium positioning. Especially when someone my height really needs an extra 50mm to be really comfortable. 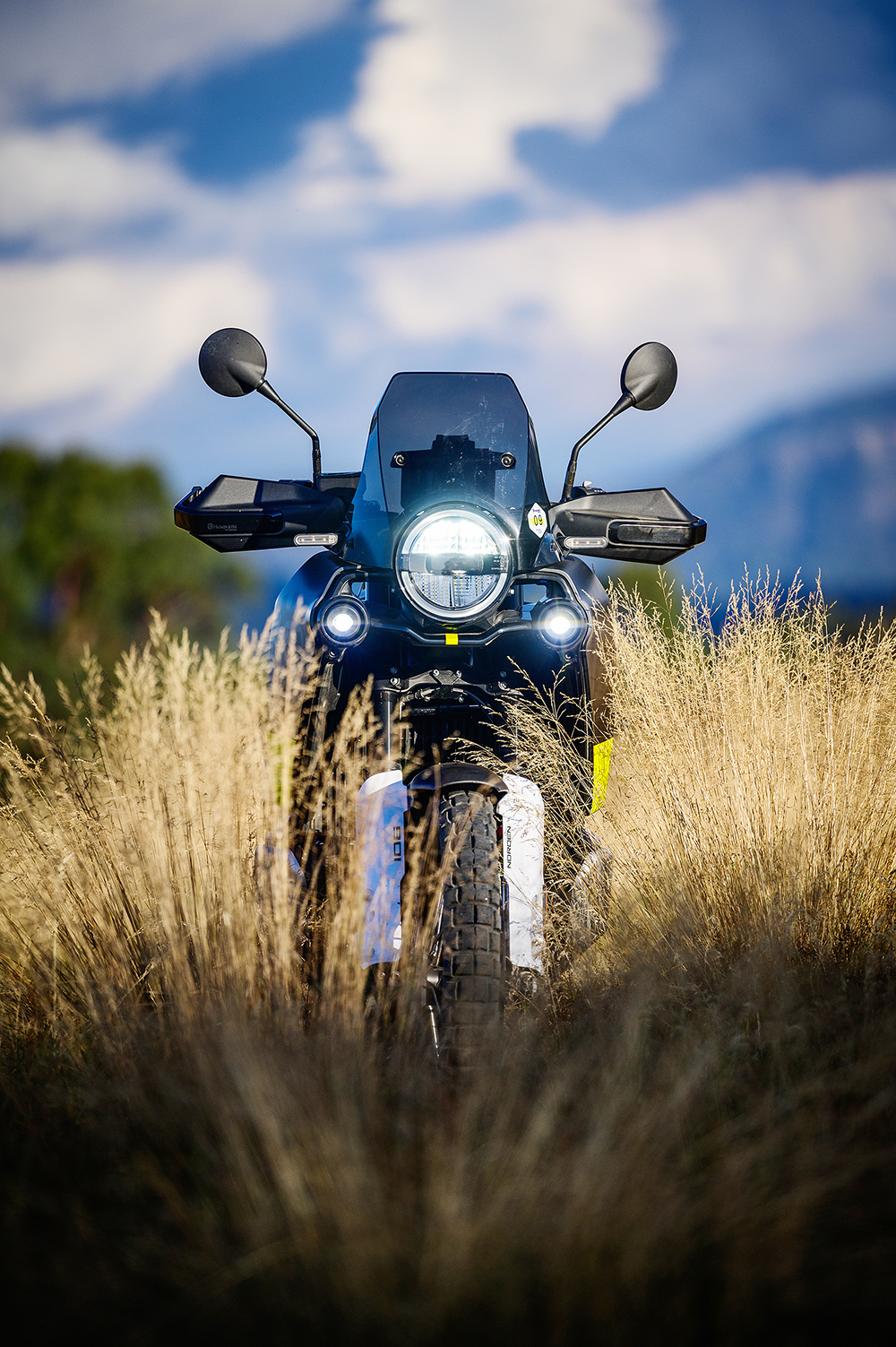 The upper and lower fairings that shroud the low-mounted 19L fuel tank offer excellent protection from the elements with almost no wind detectable at all while riding at freeway speeds. It is also worth noting that the bodywork is easily removed by just four bolts each side, making access to most of the engine pretty simple. Complementing the Norden is a TFT dash that is nothing short of brilliant. It is from here via the left-hand switchblock that all the bike’s functions are controlled. The dash itself is very easy to read in any light – and also when covered in dust. 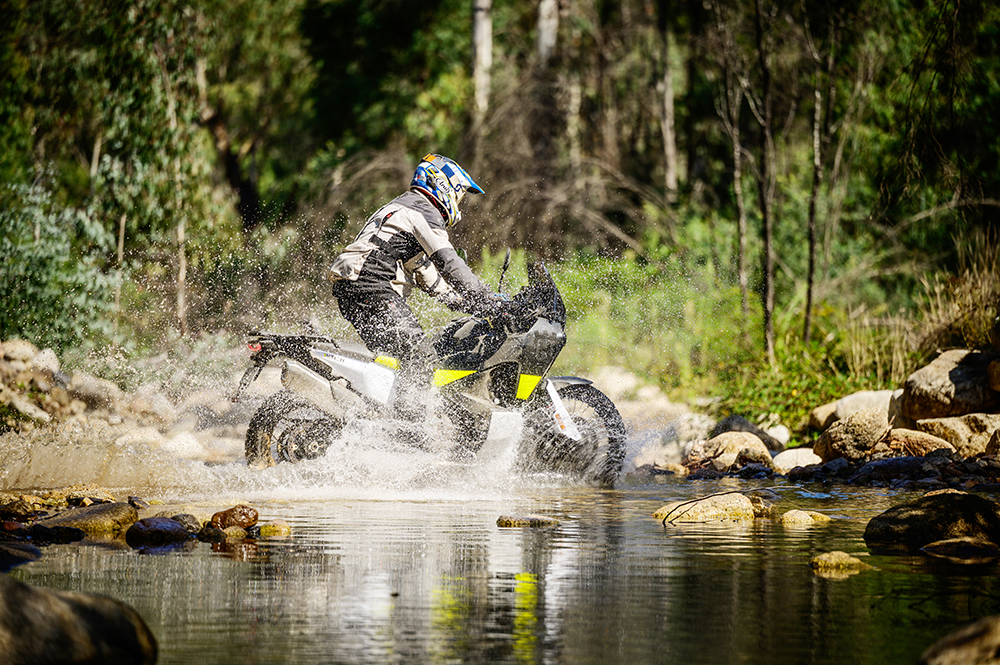 Three ride modes are offered as standard: Street, Rain and Off-road, and my testbike was fitted with the optional Explorer pack, which will set you back an extra $324, and allows you to access and customise both the traction control and the throttle response. With settings from one to nine you can basically dial in how sideways you want to get on the dirt and, believe me, it does its job very well. I set my bike to four which allowed for plenty of nice drifts around sweeping dirt roads. The lower the number the more slide you will get. Keep in mind that this is an aid, the Pirelli rally Scorpions were great on the tar but we spent a lot of this ride on ‘pea gravel’ and there is only so much you can ask of the rear tyre before it will want to step right out. 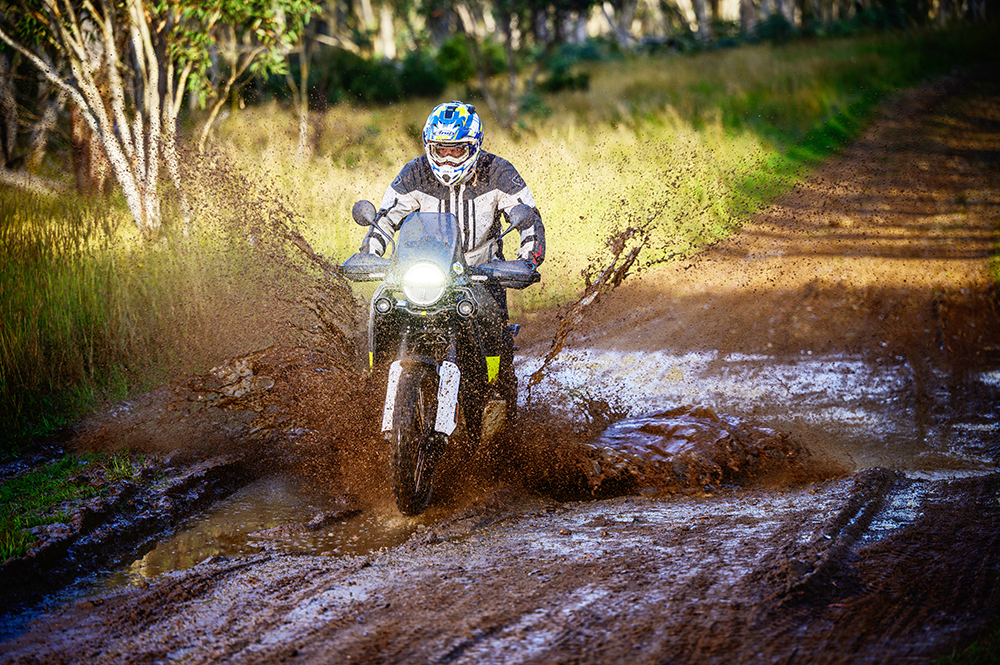 Whatever mode you choose, though, the bike will remember your settings so there is no need to go through it all again every time you turn the bike on again after a break. A charging port is tucked away neatly and a designated area just above the dash leaves plenty of room for your favourite GPS unit. Full LED lighting graces the Norden and the headlight is very good. 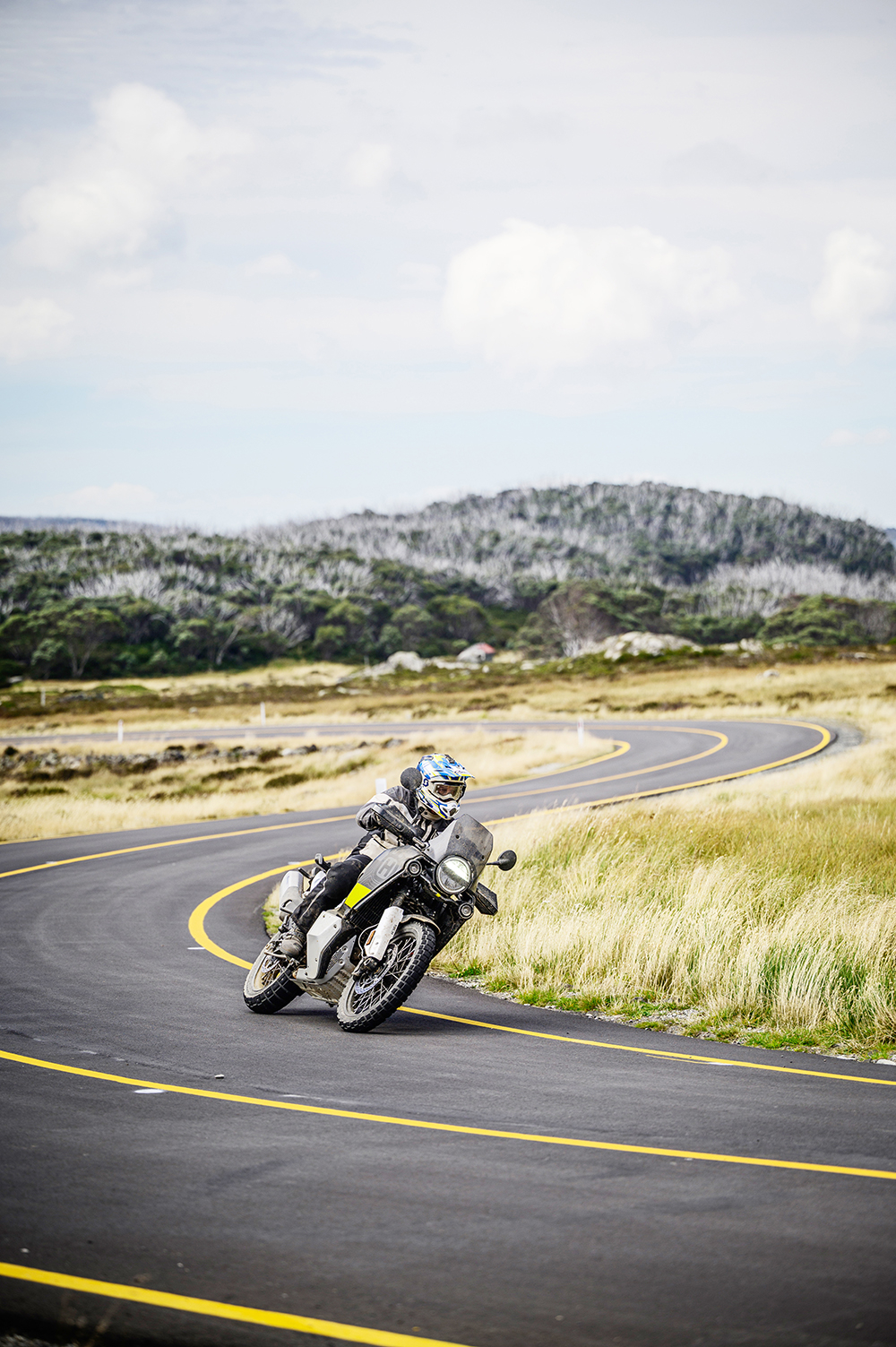 Powering the Norden is an 889cc parallel-twin engine with a 75° firing order. It produces 77kW (105hp) at 8000rpm and 100Nm of torque at 6500rpm. Coupled to a gearbox with a two-way quickshifter that can be turned off, I was never left wanting more power. It pulls hard and seems to be just as happy short-shifting towards the taller cogs as it does when you rev it right out. In Rain mode, peak power drops to 90hp and throttle response is subdued to an extent. 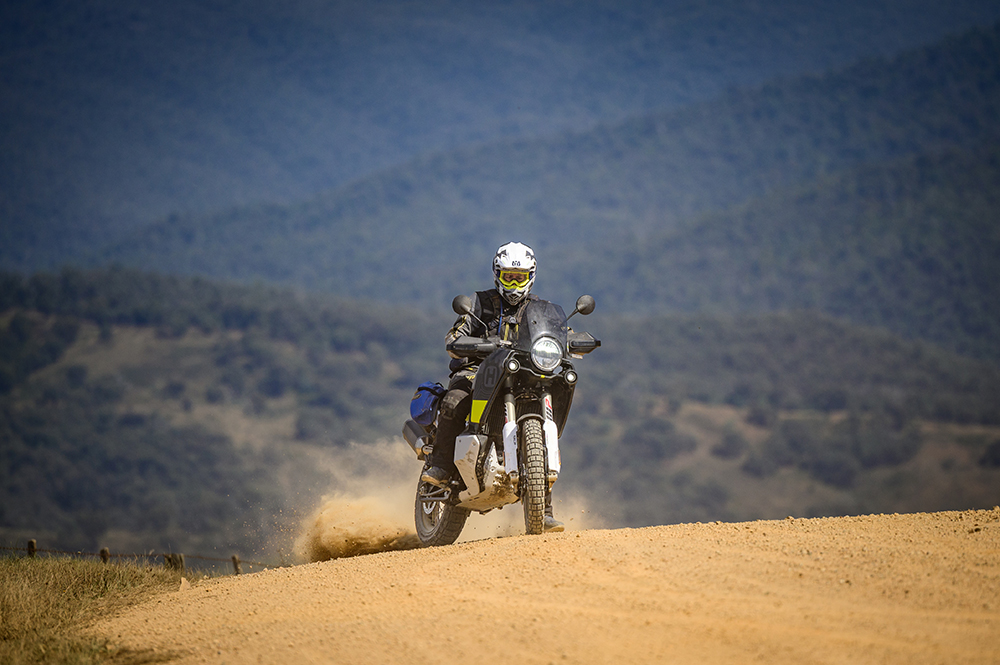 Off-road mode keeps the engine’s full output available and that actually gives the Norden a higher power-to-weight ratio than a KTM 1290 Super Adventure R in its same corresponding Off-road mode, which drops it to 100hp. Okay, pop that 1290 back in any other mode with all of its 160hp and 140Nm of torque and it’s goodnight Norden – and most bikes for that matter – but so it should. 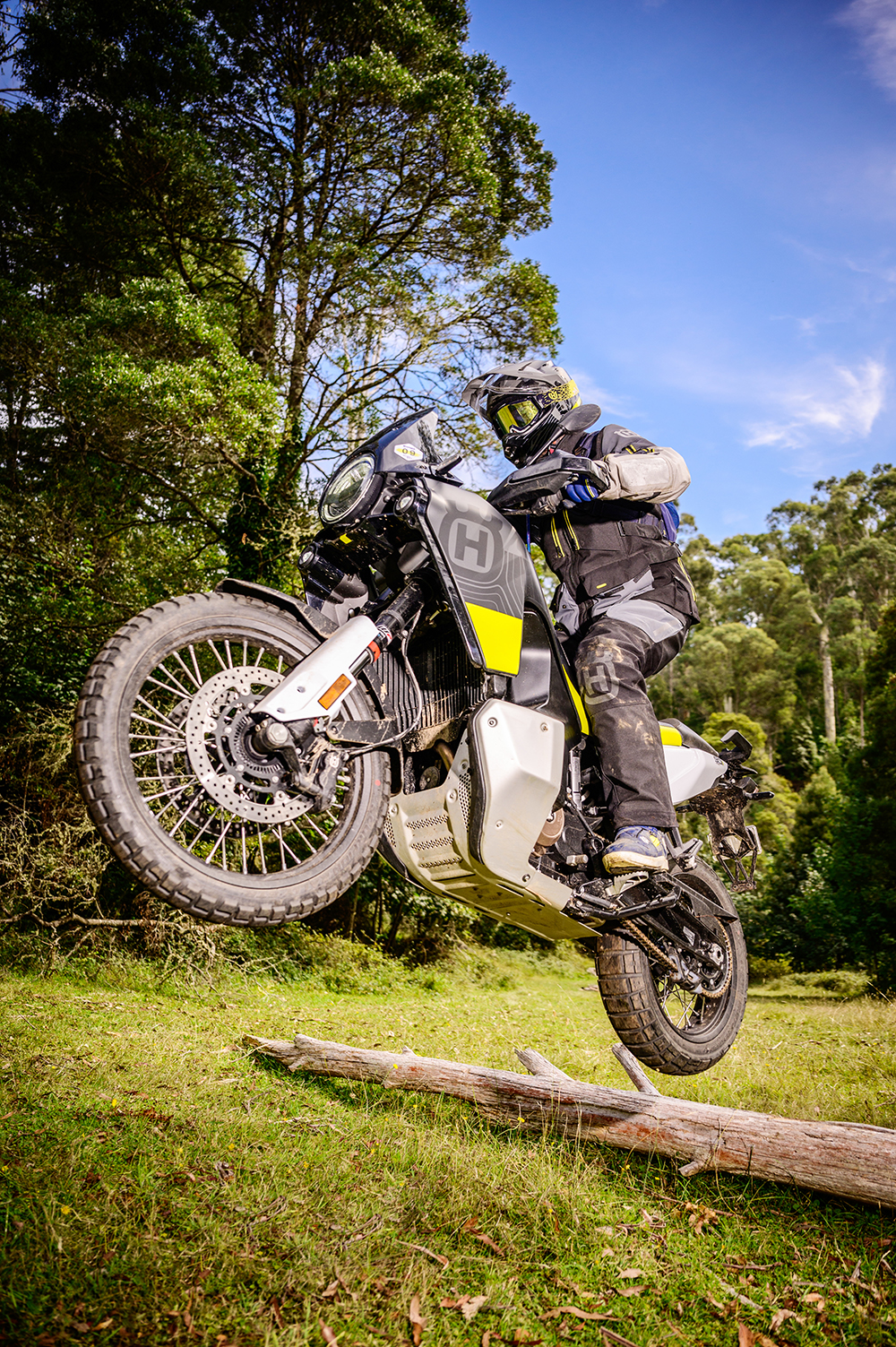 Fuel range can be up to a claimed 400km out of the 19-litre tank. I averaged around the 330km mark before the low-level light came on, but I was pedalling pretty hard, so I think 360-370km should be easily achieved. A foam air filter made by Unifilter is supplied standard as the European paper element just doesn’t cut it in our potentially dusty conditions and will probably assist with keeping valve clearance tolerance checks within spec that are recommended every 15,000km. A cable-actuated clutch is super light and a reliable option for those who plan to travel to remote areas, too. 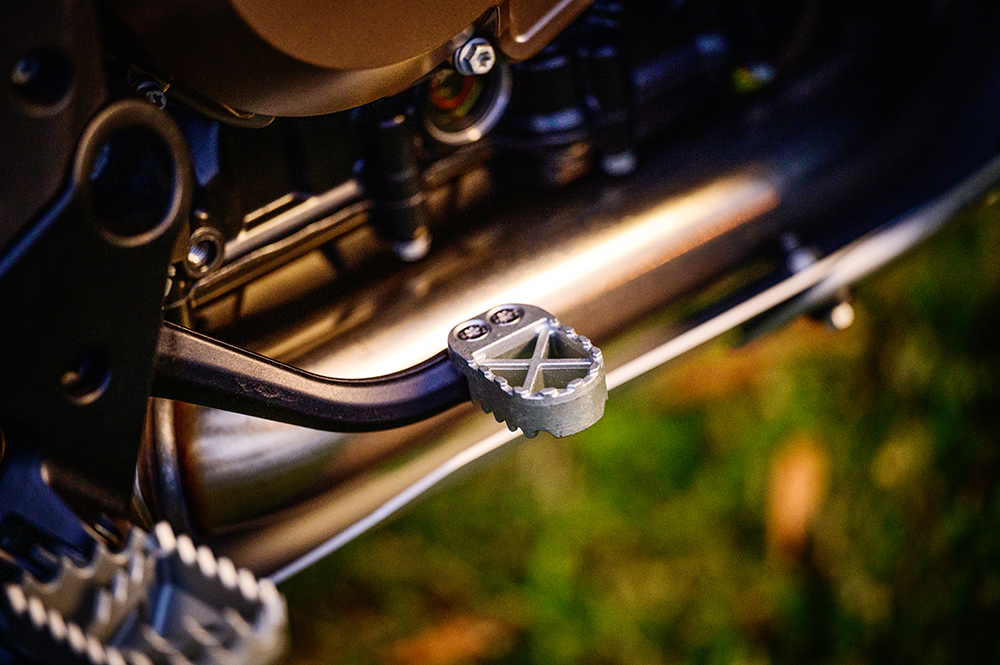 Braking is taken care of by Husqvarna-branded J.Juan calipers with Bosch looking after the ABS side of things. The radial-mounted front four-piston calipers grab twin 320mm rotors, while a twin-piston caliper and 260mm rotor takes care of the rear. We did a lot of very long descents on our ride and at a pretty decent pace, and braking remained strong and consistent and the ABS system worked a treat. I always do a simulated emergency stop on a testbike early on to get a feel for how it may play out in a real situation. Merrijig and the surrounding areas were packed with Sambar and Fallow deer, as well as some very sizeable Eastern Grey kangaroos – good brakes were a must. ABS is disabled in Off-road mode, but only on the rear. 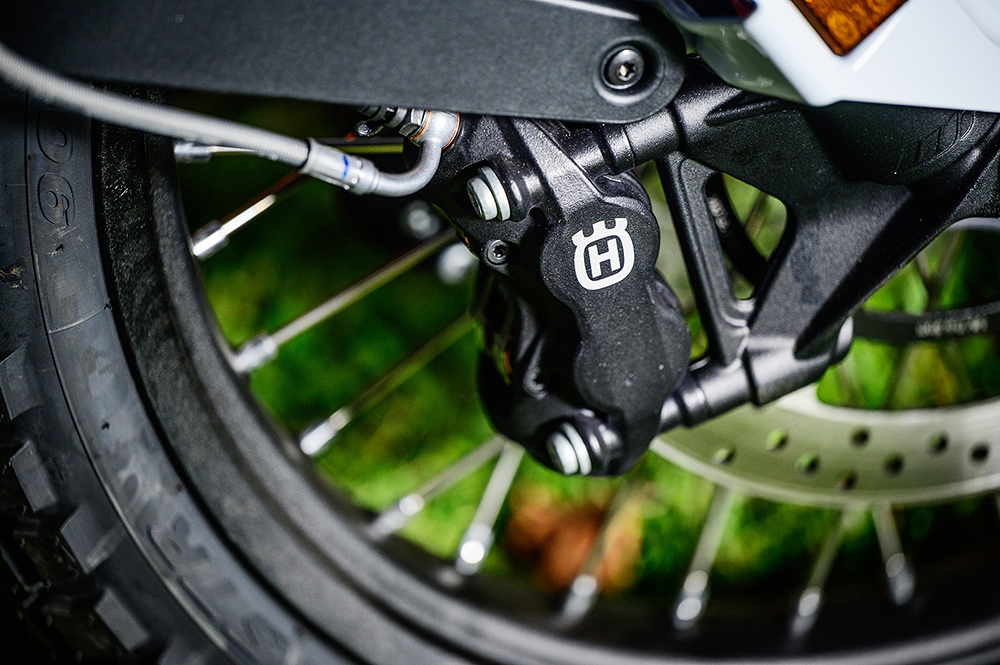 As expected, the KTM-owned WP graces the Norden when it comes to suspension. The Apex 43mm inverted fork has a decent 220mm of travel and is complemented by an Apex shock with 215mm of travel.

Needless to say, both ends are fully adjustable featuring rebound and compression and the shock also has a remote preload adjuster easily accessible just below the seat. 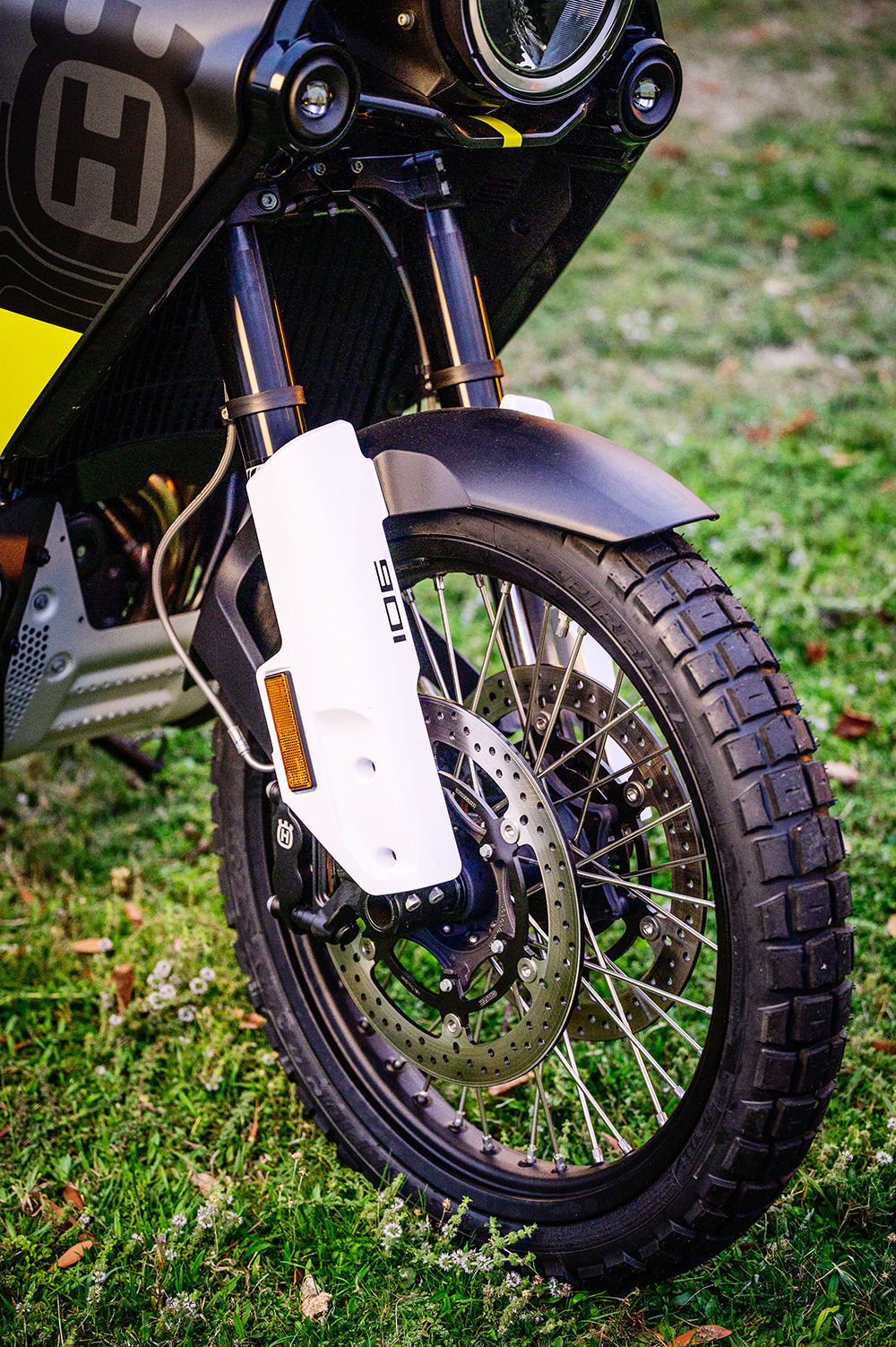 On the road the big Husky was sublime, there is a little bit of dive from the fork under heavy braking but that’s to be expected from a bike with longer-travel suspension, while the shock performed equally as well devouring anything the Victorian blacktop had to offer.

It’s when you hit the dirt, you’re reminded the Husky isn’t out to beat its KTM-branded R-model cousin, because in stock trim, it doesn’t come close. The bike is not aimed at hardcore adventure riders, it’s aimed at the adventure touring market. In saying that, the Norden will probably go just about anywhere the KTM Adventure 890R will – but at a reduced pace. When riding at a moderate speed on rougher tracks, for example, the suspension will begin to show its preference for smoother dirt or tar. It doesn’t take much for it to bottom out at both ends and it’s easily upset by fist-sized rocks. 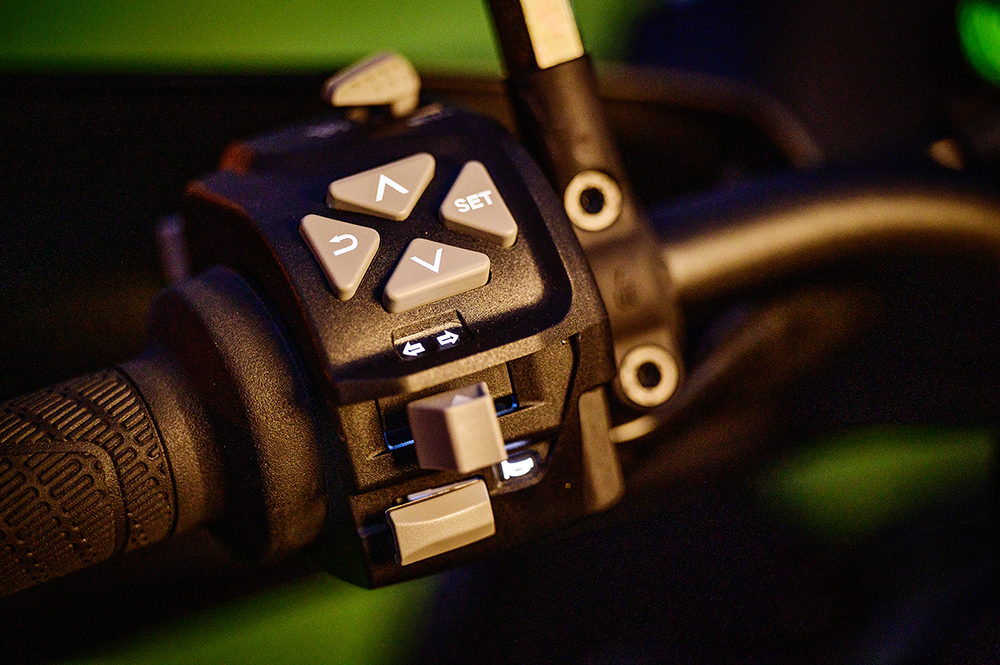 However, back the pace off and it’ll go with the flow, but those of who like to push a bit harder off-road will find it a bit soft. Which is probably why Husqvarna offers suspension upgrades – I’m not sure if this is a Husqvarna Australia-led upgrade, but I wouldn’t be surprised if it was. 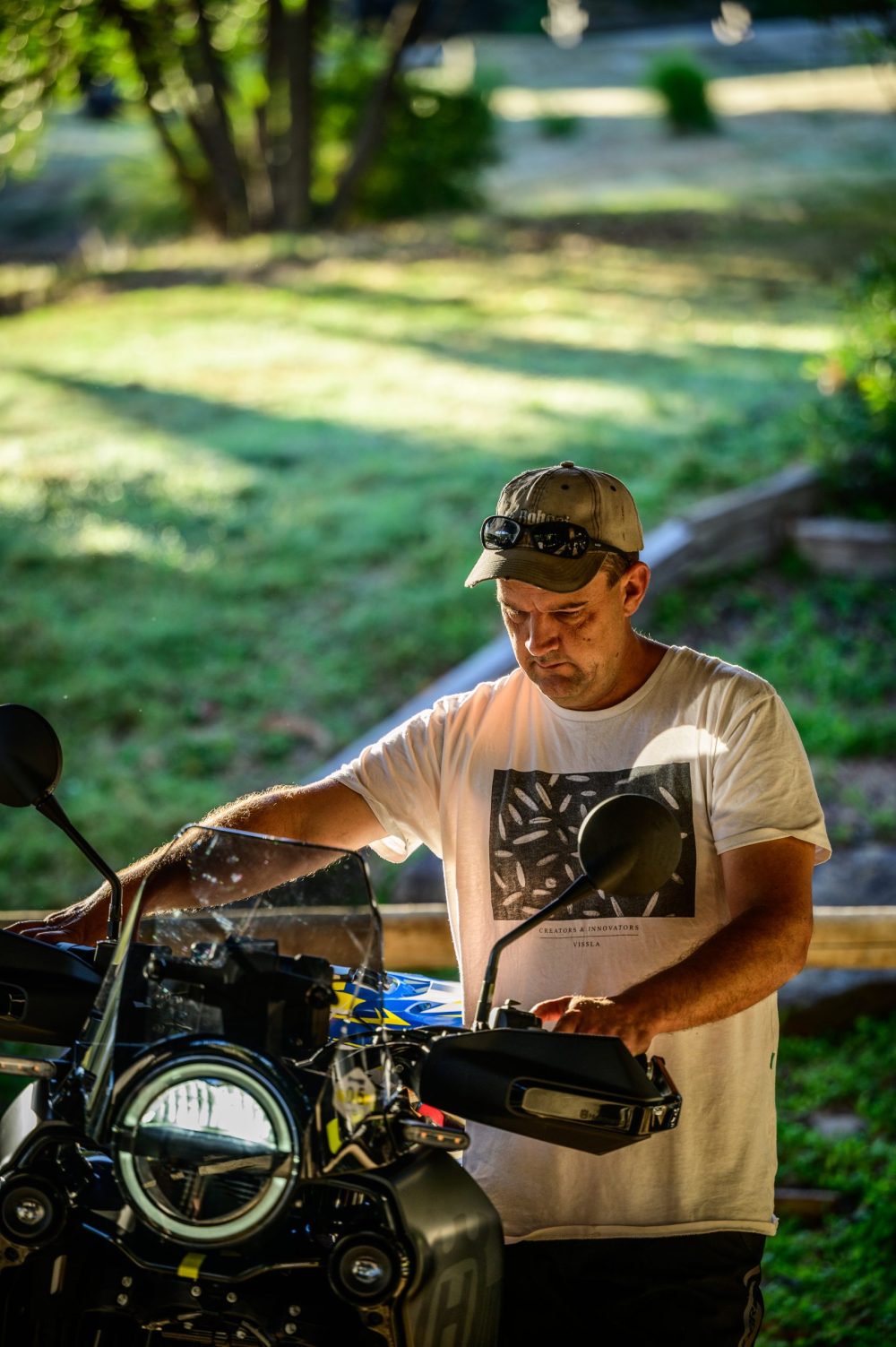 Two bikes were made available to us sporting both of the two different available upgrades. The first includes a WP Trax Shock and WP Cone Valve fork offering 240mm of travel at each end. The second option gives you a considerable 270mm of travel with a Trax Shock and a Cone Valve fork, and I sampled both variants down a rough section of track which was heavily rutted and had plenty of erosion mounds. The 205kg Norden was suddenly transformed into what felt a lot more like my own Husky 501. Bumps, rocks and even jumps were soaked up incredibly well compared to the stocker, but you’d want to really need it because it’s by no means a cheap upgrade – with a price tag of $5300, it’s an upgrade that’ll add another 20 percent to the purchase price. 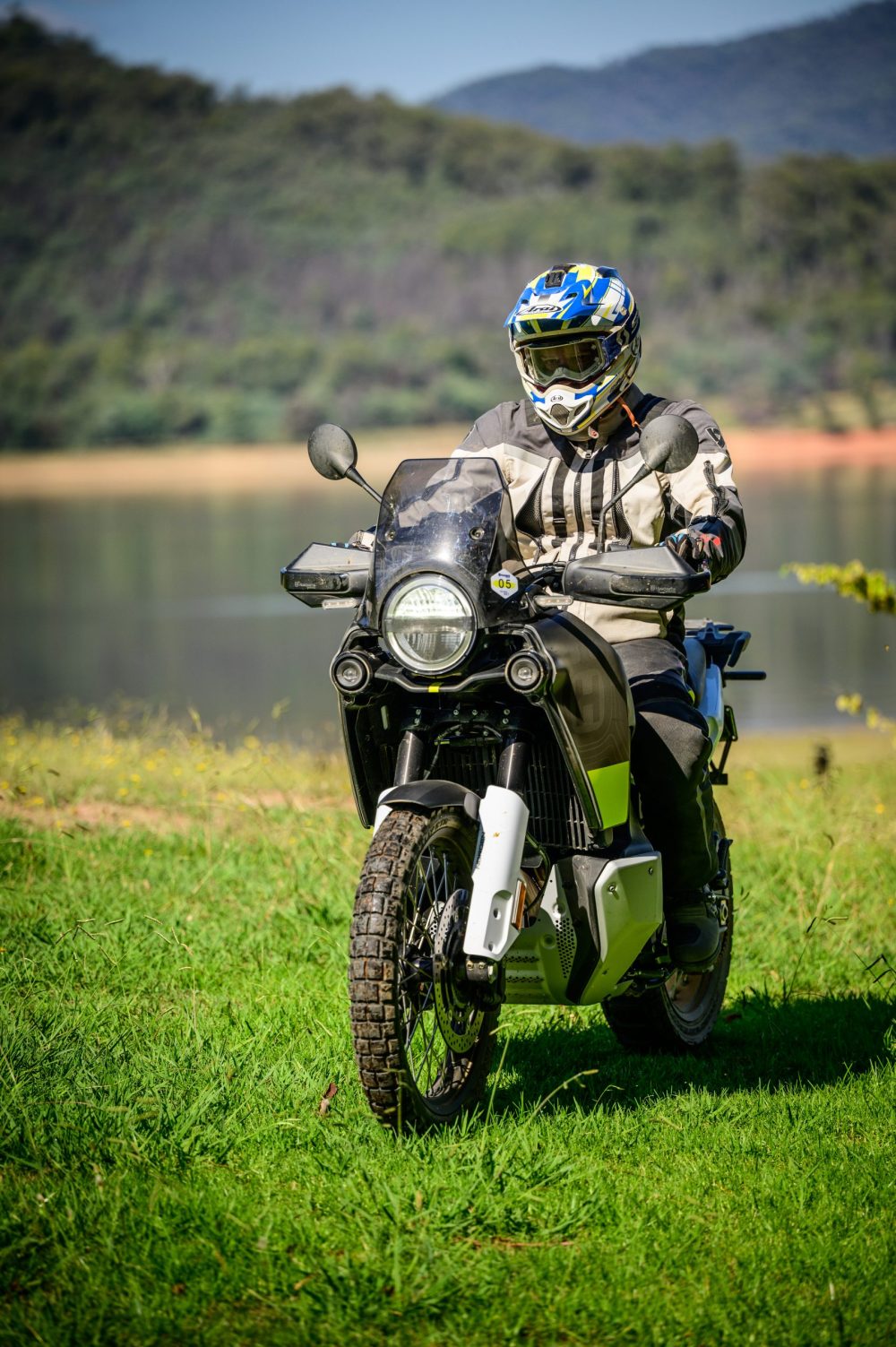 But if you’ve got the funds and like to go fast on the dirt, it’s an option that will leave you pretty pleased with yourself. A big call, but it’s probably the best suspension I’ve experienced on a mid- to large-capacity adventure bike.

One other thing I noticed is that when fitted with either of the two suspension upgrades the Norden took on a whole new look. Because to me in stock form, the standard bike seems a little low and slightly chubby. But the taller suspension componentry made the bike look much better proportioned for a capable off-roader. A taller sidestand is required if you do go with the upgrade, and while a centrestand is available, it’s not included as a standard item. 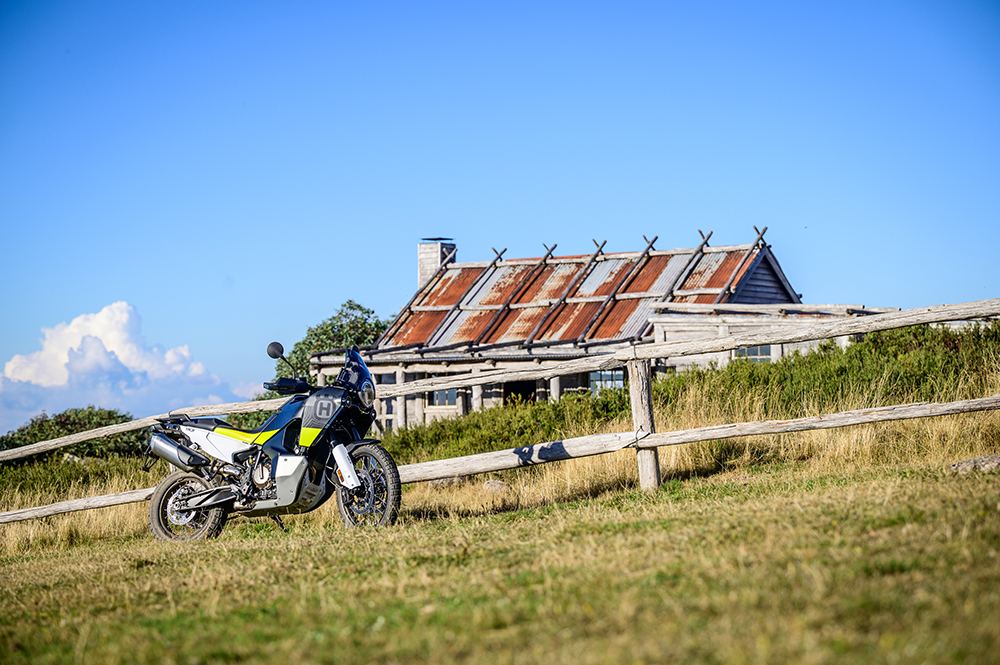 We all know the Norden is heavily based on a KTM 890 but what the firm has managed to achieve is a bike that is quite different. It has its own personality, it behaves well both on and off the road and is truly capable of inspiring you to pack up and head off towards whatever destination you may choose.
Big days in the saddle on this bike are easily achieved due to its comfort, ample power, safety and a high level of refinement and quality. In fact, two days riding the Norden around the Victorian High Country left me wondering why I still own a sportsbike for the road. 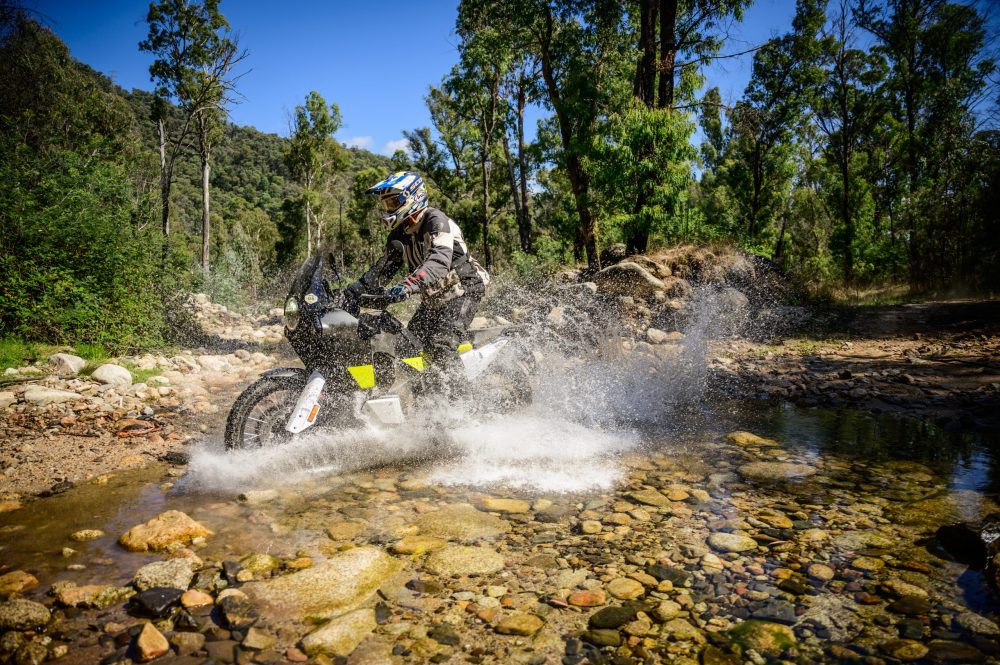