KTM changed the middleweight adventure game when it introduced the 790 Adventure a couple of years ago. Now meet its new and further improved replacement, the 2021 KTM 890 Adventure R

The 2021 KTM 890 Adventure R is aimed at the more adventurous adventure riders out there. Quite frankly, its capabilities off-road are off the charts. For a 200-odd kilo (dry) bike, its ability to handle jumps, rocks, mud and sand is almost mind-boggling. The 890 thrives on rough off-road detours and, with a skilled rider, can even conquer the most epic of trails. 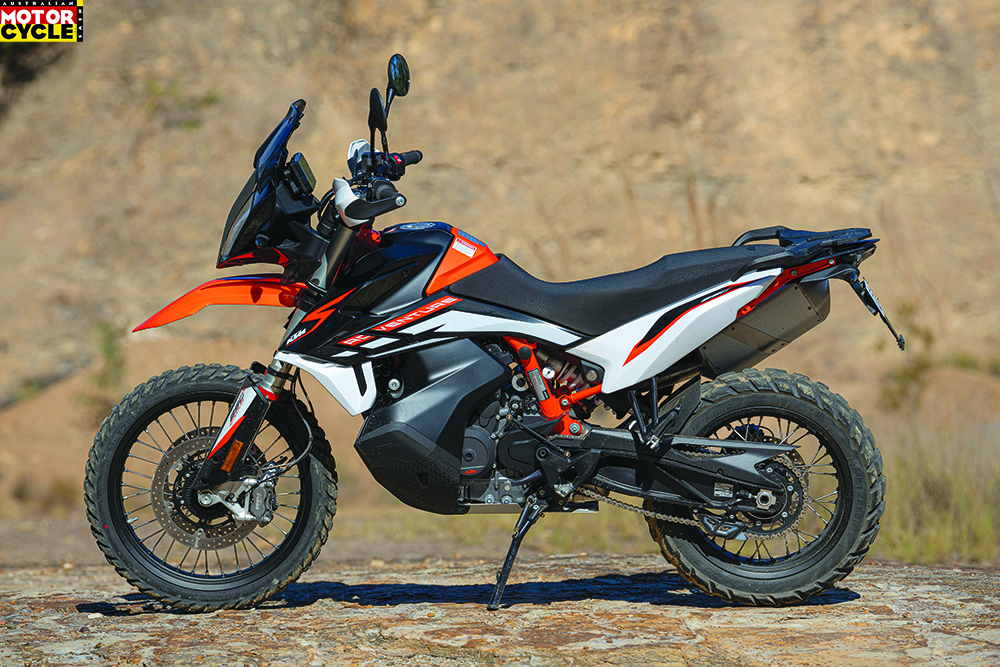 As the name suggests, the biggest update over the 790 is the new LC8c 889cc engine. Larger bore and longer stroke bring the power figures up 7.5kW (10hp) and 11Nm. An efficient exhaust and updated electronics help it meet strict Euro-5 emissions laws, while a new cylinder head boasts larger valves, tweaked ports, lighter camshafts and an added balancer shaft to reduce vibrations and allow higher revs. And there’s a knock sensor to help prevent engine damage from poor quality fuel you may encounter in way-out-there places. And the 890 loves way-out-there places. 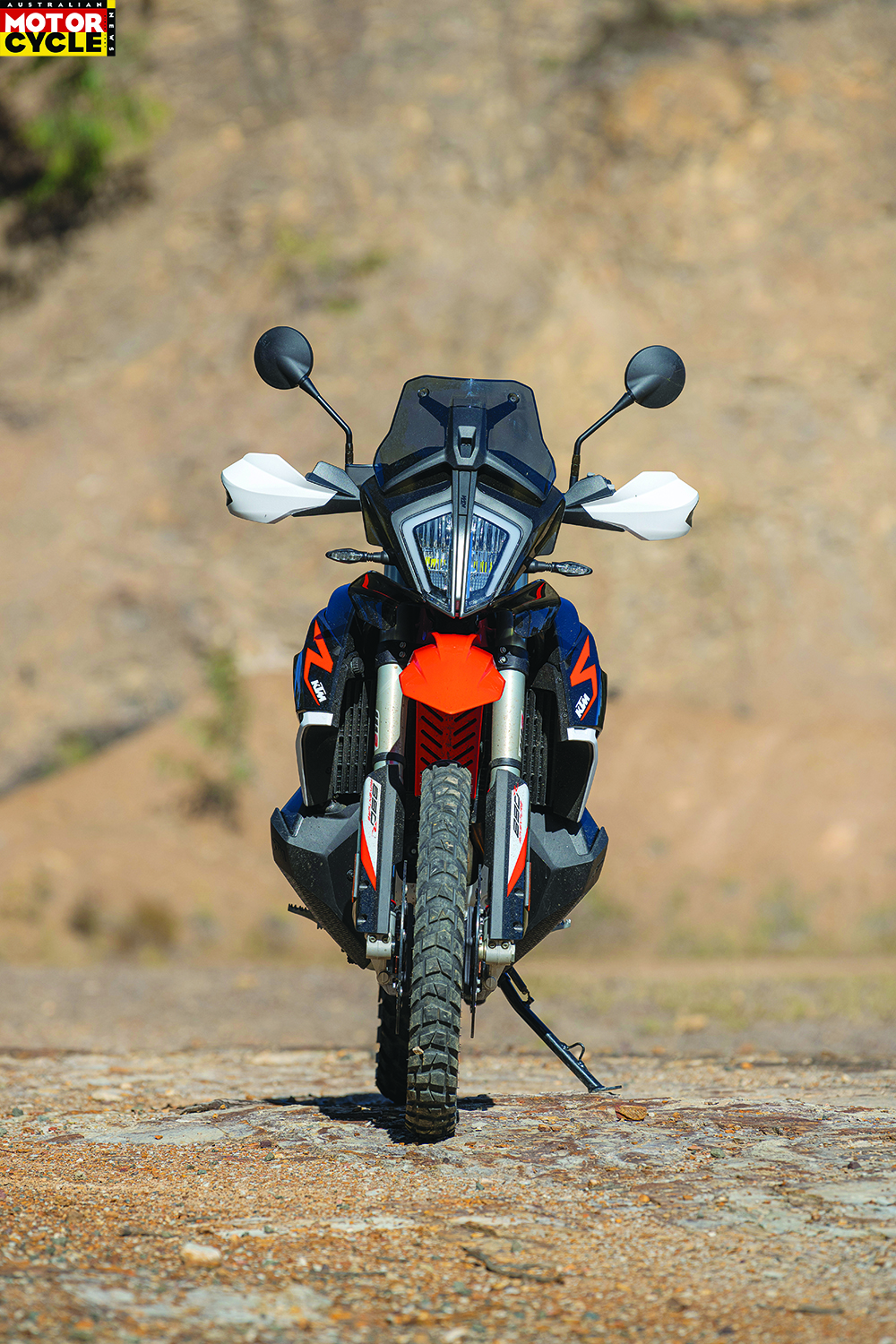 The crankshaft has gained 20 percent more heft for improved manners at constant speed and increased cornering stability. The result is a punchy power delivery with lots of over-rev for more open trails. The engine response is crisp and lively. Thanks to ride-by-wire, the throttle is precise and gives confidence to take on more technical terrain and to pop the front wheel over obstacles. 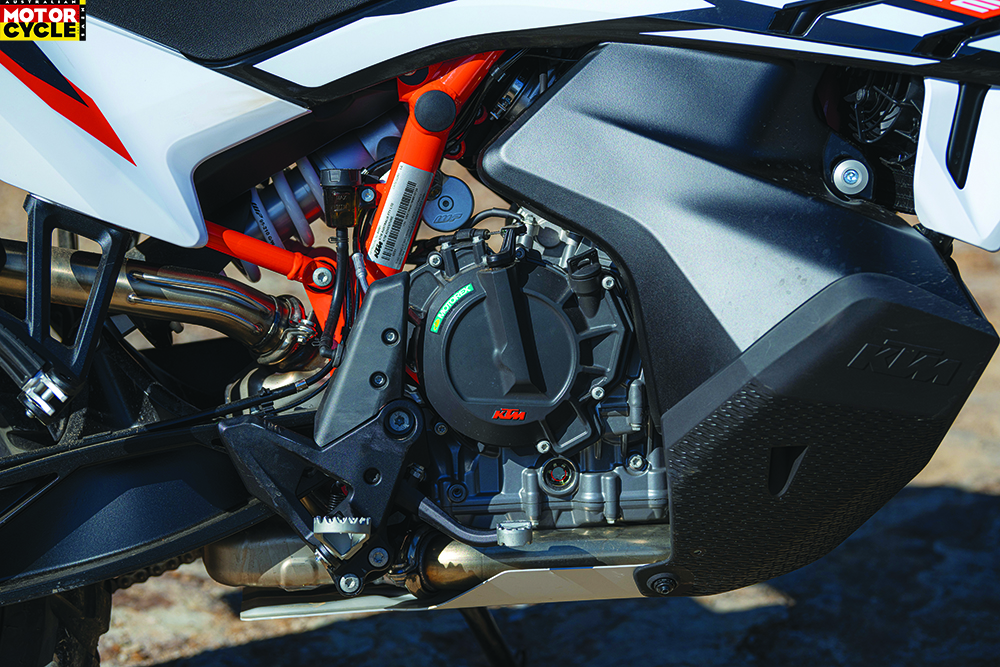 There are three riding modes as standard fitment; Street, Off-road and Rain, though this testbike was kitted up with the optional tech pack which, as well as cruise control, Motor Slip Regulation (MSR) and a two-way quickshifter, also includes the otherwise standalone option of Rally mode. Once in Rally mode you can then select from four throttle maps: Rally, Street, Off-Road and Rain. I find the Rally throttle map the best in the dirt, it has a very snappy feeling for sudden bursts of power when needed. But on the road, the Street mode has a much more progressive feel and results in less whiskey throttles over bumps. 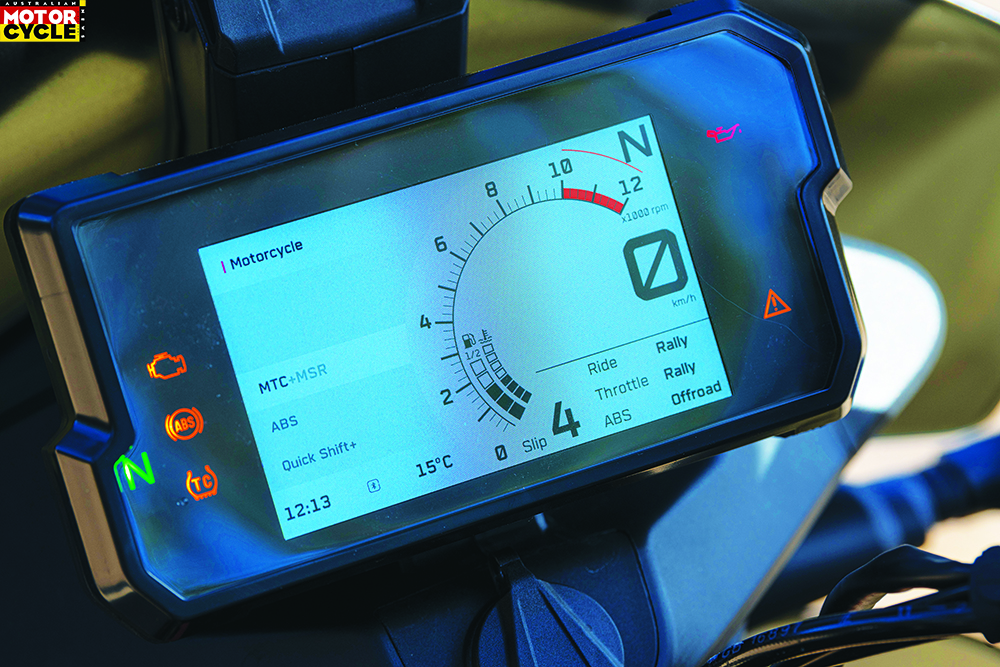 While Rally mode is enabled, you also have nine levels of traction control to choose from on the fly. Using the arrows on the left-hand switchblock lets you click them up and down with ease rather than having to navigate your way back into the ride-mode settings screen.

Mode 1 has the least intrusion from the traction control allowing mega slides and full-power wheel spinning for riding in the sand. Each mode gradually increases the traction control’s intervention through to Mode 9 where, if you snap the throttle open and force wheelspin, the system quickly jumps in and halts the fun – or the panic, whichever comes first. 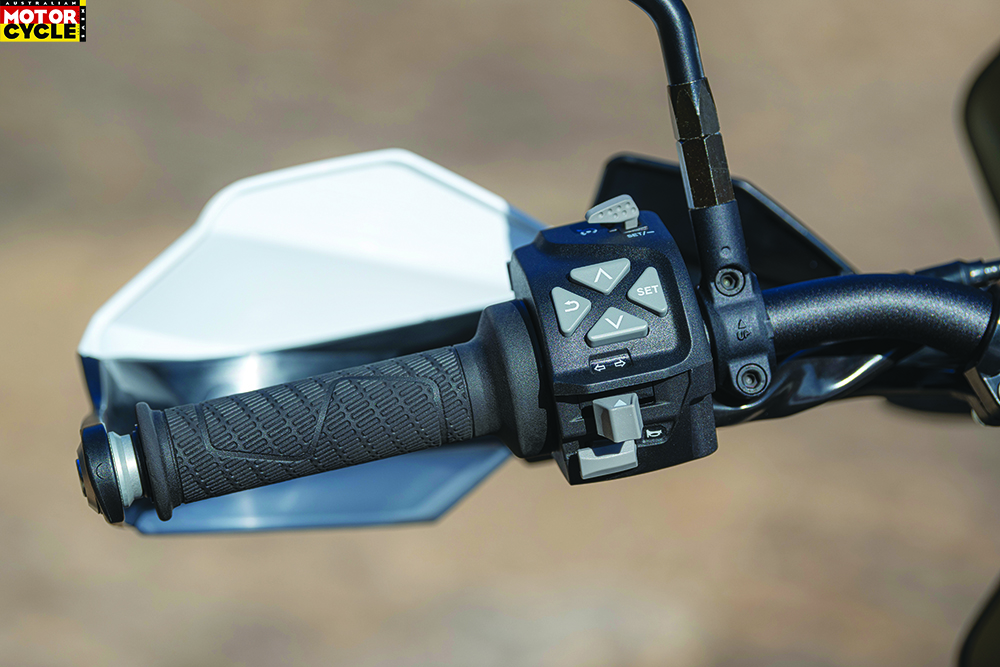 Similarly, if you like to chuck wheelies, Rally mode is where you want to be. The Metzeler Karoo 3 tyres fitted to my 890 seemed to make Street mode’s traction control settings almost unusable on twisty bitumen. If you are cranked over and feeding in the gas, the TC light will flash and keep cutting your power; the street setting really isn’t designed for dirt-focused tyres. The issue goes away once you select Rally mode and decent feel meant I could feed the power on how I wanted to without making the tyre slide on dry bitumen. 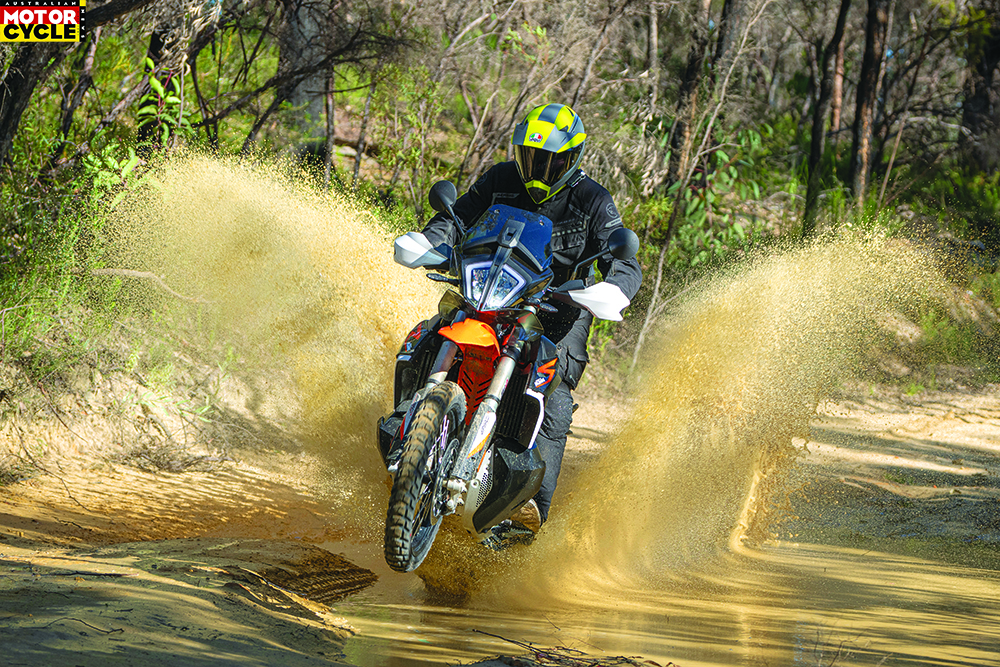 The six-speed gearbox has been given a few tweaks over the outgoing 790, too. Shorter gear lever travel and a lighter shift action to complement the updated quickshifter function has been employed. Fourth, fifth and sixth gears have been toughened up by way of bead blasting to increase longevity. The gearbox shifts well enough, although I couldn’t get much of a feel of the quickshifter as it only worked from first to second gear and on the downshifts. I tried turning the function off and on but I couldn’t gain an improvement. All the 890s have the quickshifter hardware fitted from the factory, but you need to fork out for the optional Tech pack to have it activated through your dealer. And although I didn’t seek remedy via a dealer, I have little doubt it was an activation error that could very easily be rectified. 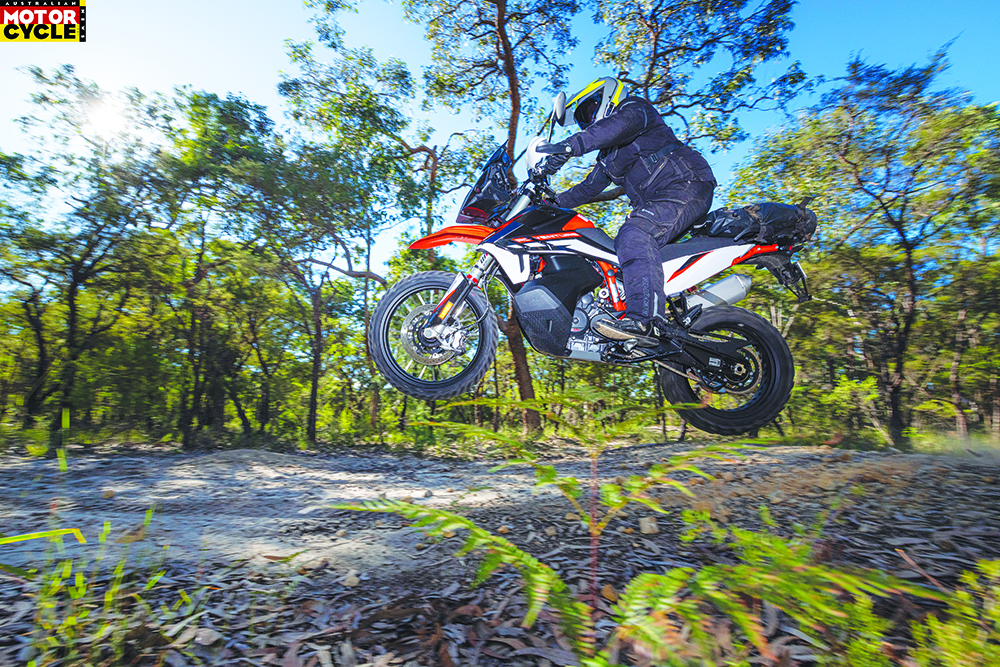 The MSR, which also comes as part of the Tech pack, is an aid to help reduce compression lock up in slippery surfaces. It senses the rear wheel sliding and increases the revs slightly to reduce slip. The only time you feel it working is when you stop really suddenly, you notice the revs hang a little higher before settling back to idle. It is a nice function to have in the back pocket, especially when you hit the picks in a hurry. Twin 320mm discs with four-piston radial mount calipers slow things down effectively, and the rear’s 260mm twin-piston brake feels strong and predictable. 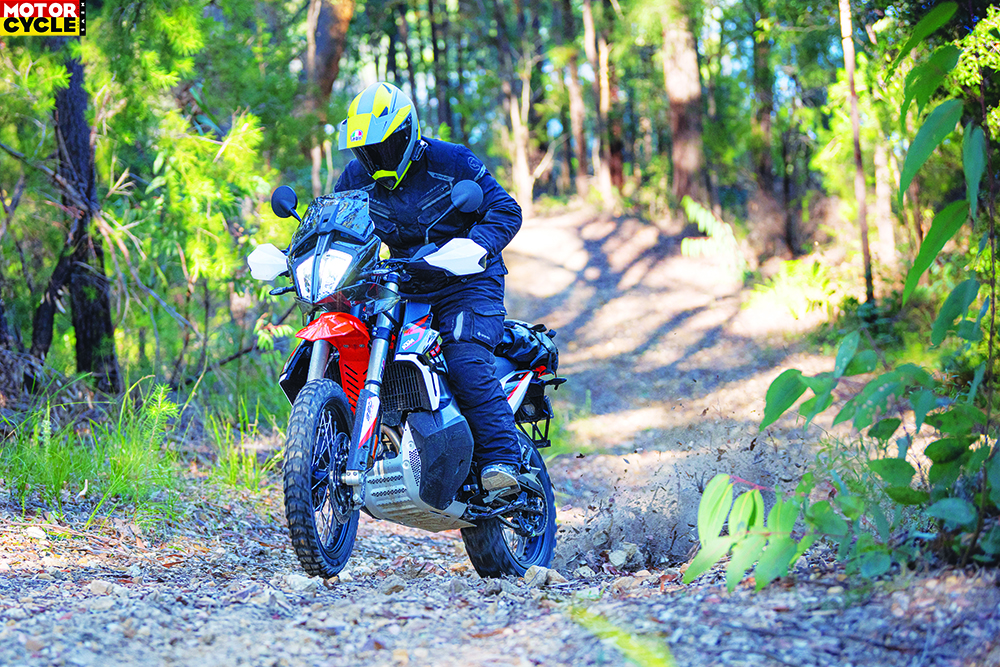 The chromoly-steel frame has remained relatively unchanged, most of the chassis updates have been aimed at the rear subframe. It has been strengthened while also being lighter than the 790’s. The steel-trellis subframe is more rugged to cope with two-up adventuring, and to take the range of optional luggage. 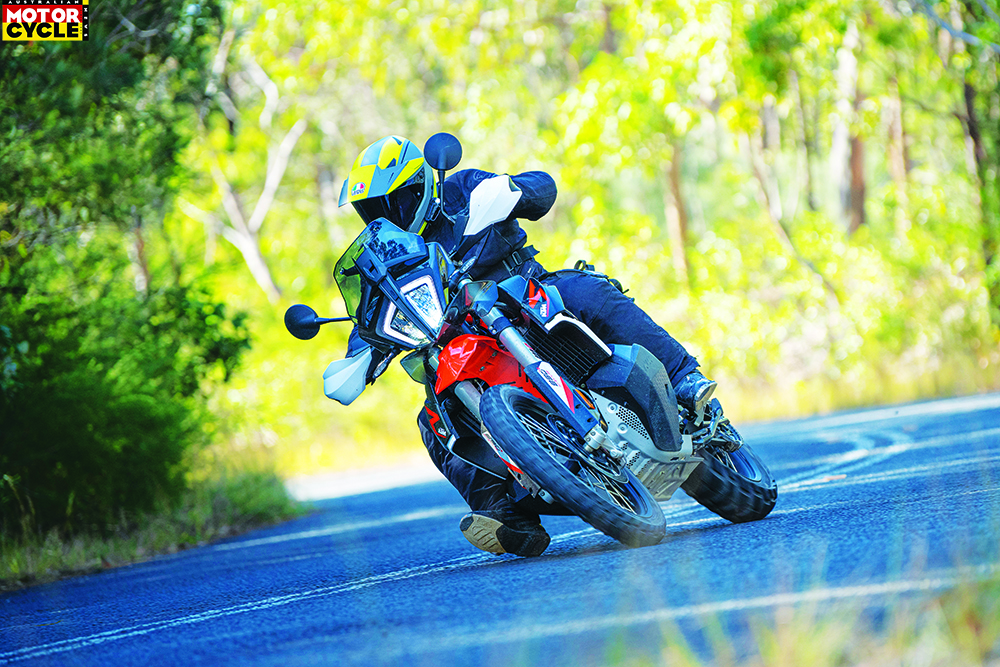 The jewel in the 890 Adventure R’s crown is the suspension. The 48mm WP Xplor fork resembles those found on the KTM enduro range. Without the need for tools you can adjust preload, compression damping and rebound damping. At the rear, the shock absorber is mounted directly between the frame and the swingarm without a linkage. The WP Xplor rear shock has high- and low-speed compression damping adjustment, rebound damping and preload adjustments. You will need some simple tools to tweak things at the rear and the preload is super easy to adjust when you have the bike loaded up. A steering damper is tucked away under the steering stem also. The suspension has a huge 240mm of travel, which can handle the roughest terrain. I didn’t have to second-guess what surprises I may find on trails, I could hit jumps full of confidence that the bike could handle the landings or rough surfaces. Carrying the front wheel over rough sections and letting the rear-end soak up the bumps is a special feeling on an adventure bike. The 890 is so agile that you forget how big it is. 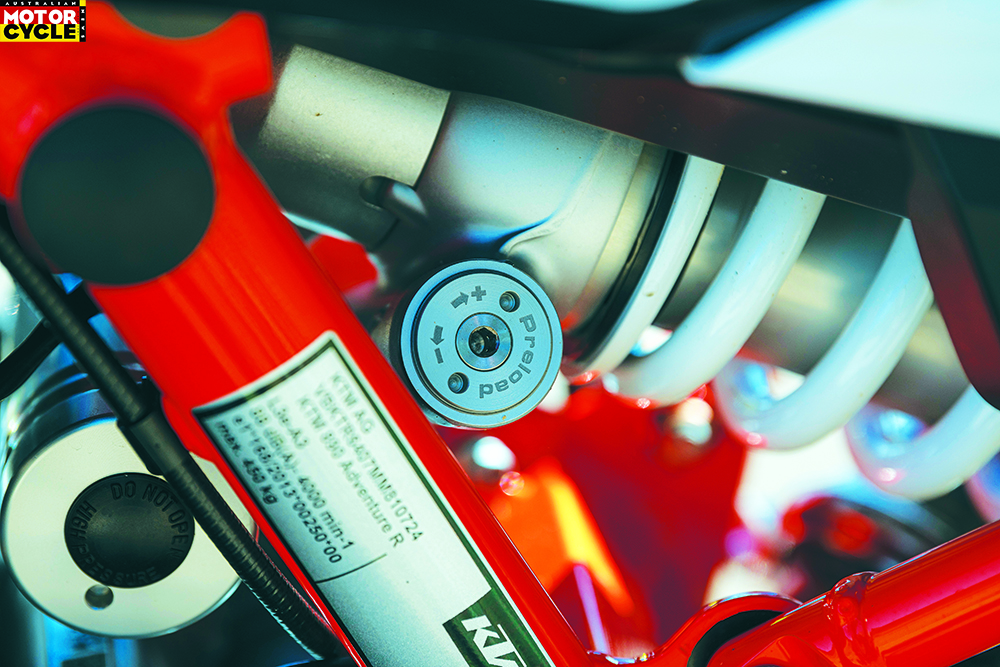 Helping to mask the weight of the bike is the fuel tank. As with the 790, the 890 carries most of its fuel down low either side of the engine for a lower centre of gravity and I could never feel the fuel sloshing about the tank no matter how much was in it. KTM claims a 400km-plus range on the open road out of the 20-ish-litre tank and I’d have to agree. With a mix of bush bashing and commuting, I averaged 4.7L/100km. Long-distance adventures will be stress free. 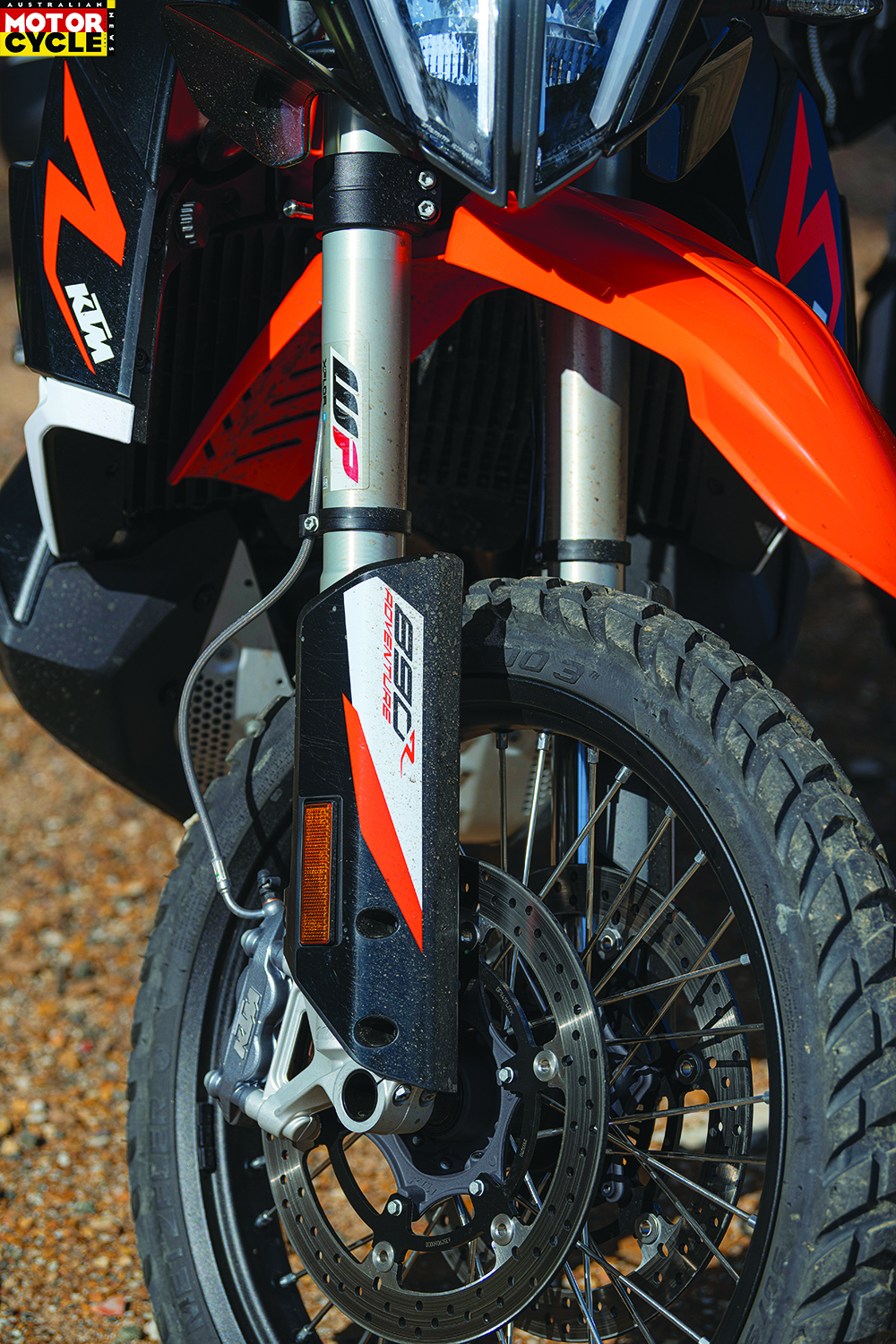 Covering long distances requires comfort, and while the 890’s protection is a compromise made for its off-road ability, it’s still a pretty decent place to sit – or stand for that matter. The minimal windscreen has two height settings, you will need a torx bit to adjust it. At the higher setting, the screen takes the brunt of the wind off your chest while moving at speed, but it wont keep the turbulence off your helmet. The larger screen from the base-model 890 adventure bolts straight on if you want some extra cover. The smaller screen gives you an unobstructed view of the terrain directly ahead and this is key in more adventurous terrain. 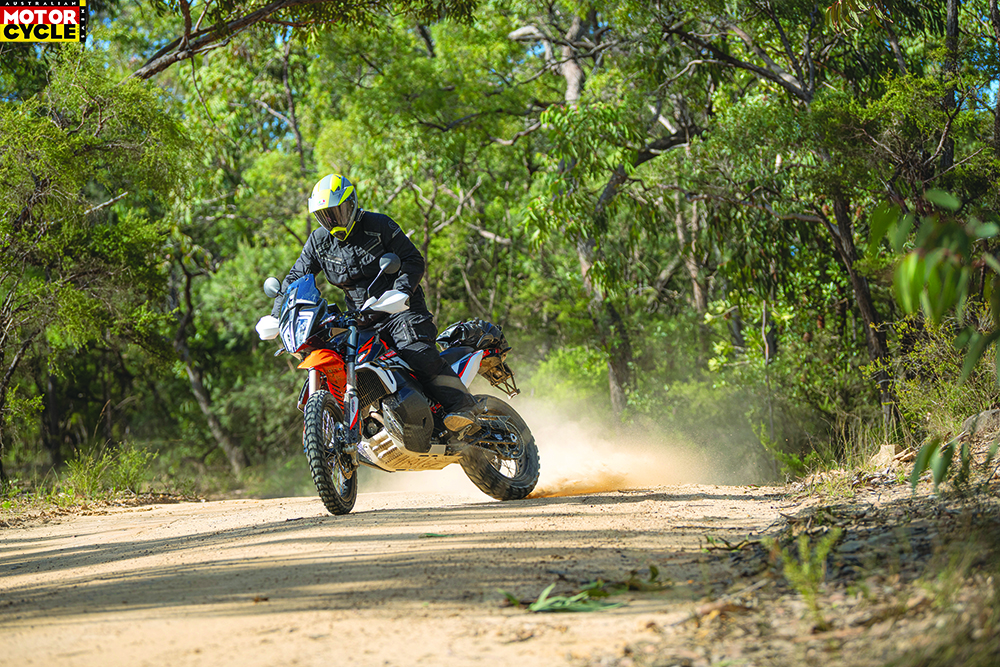 The screen is just big enough to house the colour TFT dash and the powered GPS mounting point. The one-piece ’bar is wide and adjustable fore and aft if required, and both the brake and clutch levers have an adjustable span, while full wraparound guards keep the weather and shrubbery from impacting your precious hands. 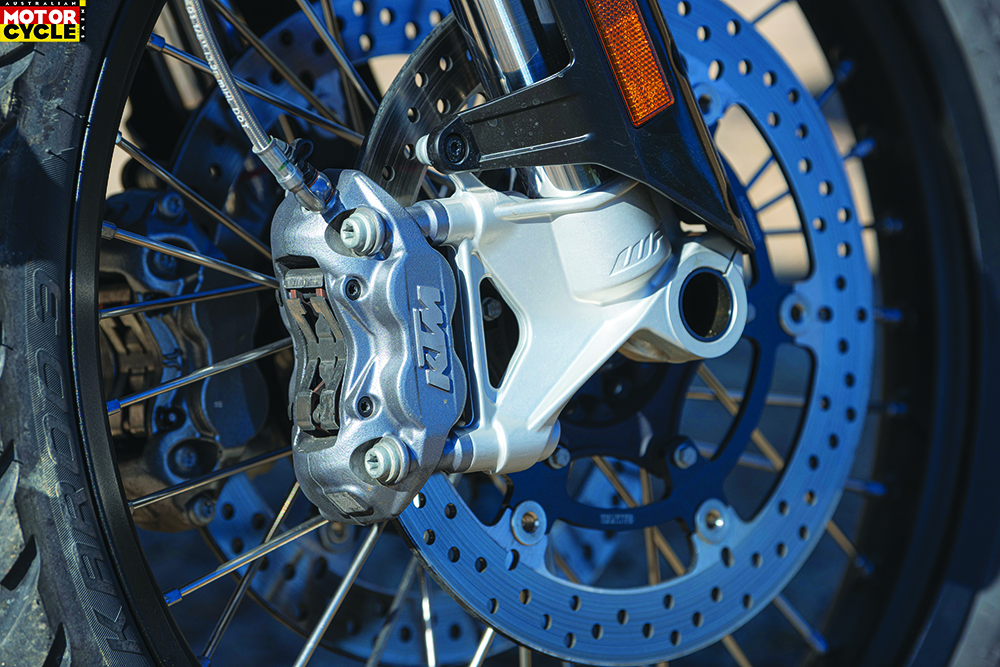 The seat is long and fairly flat, it’s comfy enough while giving you room to move backwards and forwards as required when standing, the ’bar is high enough for me at 175cm tall, though taller riders may prefer to raise it up a touch. The footpegs with the rubbers removed allow for some really good grip, but they will tear your road boots to shreds, adventure or motocross boots are best for this one. I can’t fault the ergonomics at all; there’s room to move about when standing and throwing it vigorously down a tight trail and then it’s a pleasant, comfortable and relaxing ride when back on the bitumen. 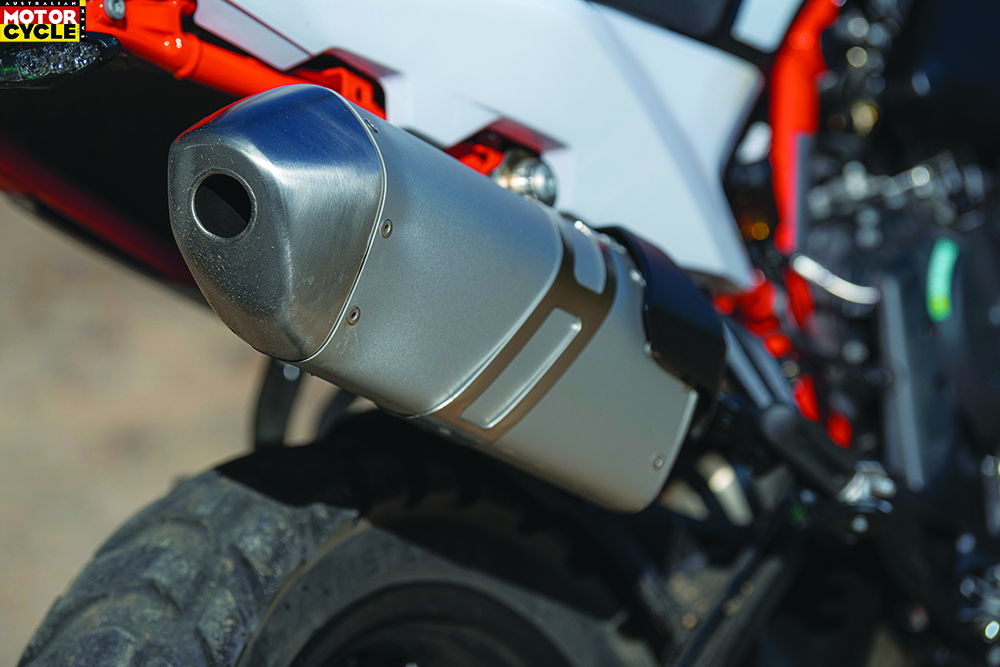 The Adventure R is rugged. The plastic body panels have moulded in graphics to stand up to scratches and scrapes that are bound to happen in the scrub. No more peeling or rubbing off tatty stickers.

At $24,470 ride away, the Adventure R is definitely at the top end of the price range compared to the competition (though there’s a $37K option, too, see sidebar). Add another $1200 for the Tech pack and it’s nudging $26K. But they say you can’t put a price on happiness.

The 890 Adventure R is one hell of an adventure bike. On the road it gets the job done with no fuss, but it’s when you turn off the bitumen and head deep into the bush that the new KTM really shines. 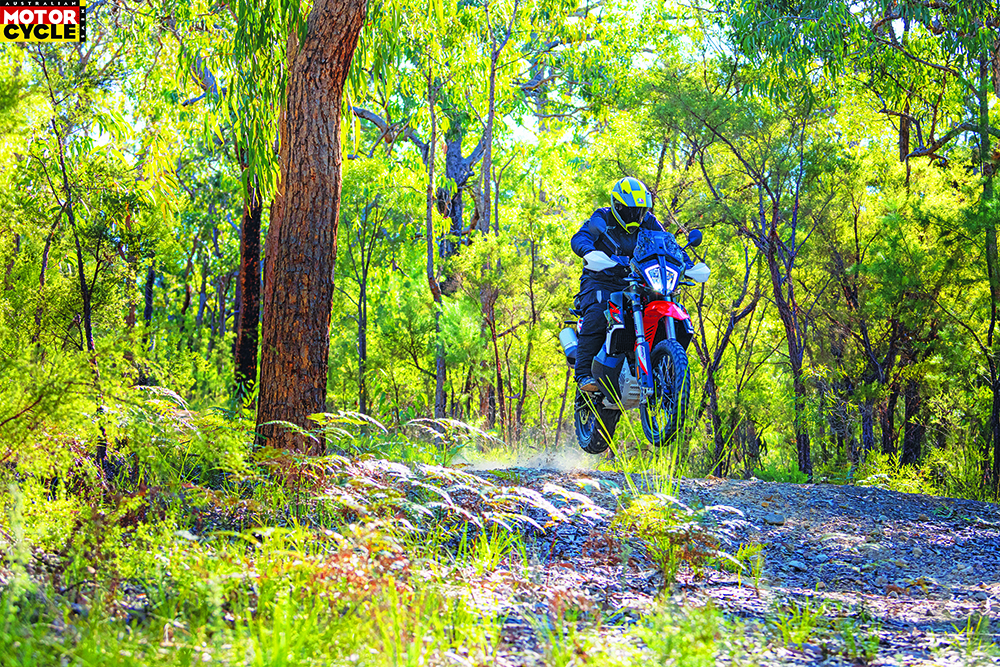 Andy ‘Strapz’ White is one of just 700 people worldwide who can lay claim to an 890 Adventure Rally. This is what he reckons

“You paid how much for a bloody motorcycle?” she spluttered.

“You have to put it into context,” I countered. “It’s one of 700 worldwide, will retain its value and I couldn’t build one of this spec for the money.”

And that’s in essence what sets the $37,000 (ride away) Rally apart from the already up-spec R model.

The main difference between them is the suspension. The Rally runs Dakar-spec WP Xplor Pro units front and rear. Up front, the closed-cartridge spring fork uses a cone valve controlled by a spring and there’s compression, rebound and preload adjustability. KTM reckons that the cone valve system allows for almost unlimited damping and by adjusting the tension of the spring, changes can be made without pulling the fork apart and changing the shim stack.

And with 270mm of travel at each end, it has 30mm more travel over the R model.

The problem is, I’ll never be satisfied with ordinary suspension again, the feel and control of the Xplor Pro really is next level. On dirt or sealed roads, the bike tracks smooth and true, shrugging off bumps with style and grace.

Not so endearing is the buffeting and wind noise off the lower Rally screen – the same that’s fitted to the R and for the same off-road visibility reasoning. The two-position, two-part screen needs tools to adjust, a little incongruous for a modern bike. And surely even more adjustability could have been designed in for the time spent on the black top.

The Rally comes standard with an Akrapovic silencer, which is 35 percent lighter than the R’s, there’s broader off-road footpegs with removable rubber inserts, narrower Dirt Star tubed rims which are more suited to off-road riding. The tapered ’bar is adjustable to six positions, there’s carbon-fibre tank protectors and, of course, the racing colour scheme which is embedded into the plastic so it still looks good when scratched – ask me, I know!

The five-inch TFT colour telly on the dash is the same as the R model, and the optional $1200 Tech pack – Rally mode and all its adjustability, two-way quickshifter, MSR and cruise control – is fitted as standard.

At a mind-boggling $37K (ride away), it sounds like it’s bordering on obscene indulgence. And it is… until you ride it. Then it’s worth every cent. 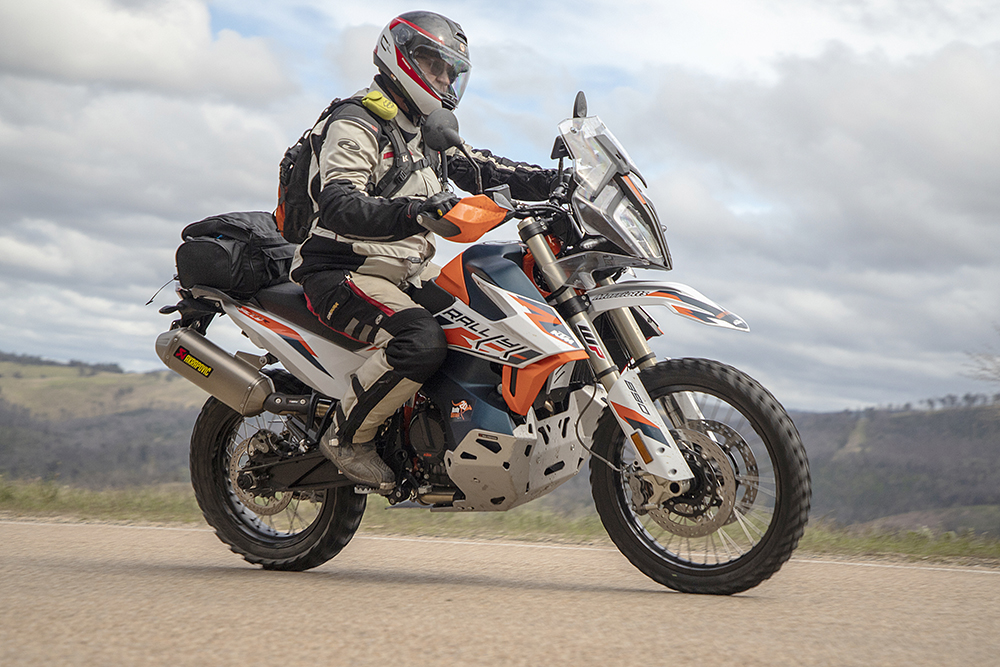