Sitting in the media briefing before riding the 2022 MT-10, two points become apparent. One, the MT range, from MT-125 to MT-10, has been a huge success for Yamaha, with nearly 50 percent of all sales coming from MTs. In fact, with 420,000 MTs produced since 2013, it’s easy to wonder what they sold before the MT brand was formulated?

Second, I’m getting old, because I remember riding the first ever MT, the 2005 MT-01, when it was launched in Cape Town as the original ‘Master of Torque’. And it only seems like yesterday…

In 2016 Yamaha introduced the pinnacle of the MT empire, the MT-10, and later the premium MT-10 SP. Essentially transforming a crossplane YZF-R1 into a torque-rich nakedbike was an obvious move, and you must question why it took Yamaha so long. It was an instant success: fun, muscular, easy to ride and full of the character other Japanese supernakeds seemed to lack. It was reasonably priced, too. 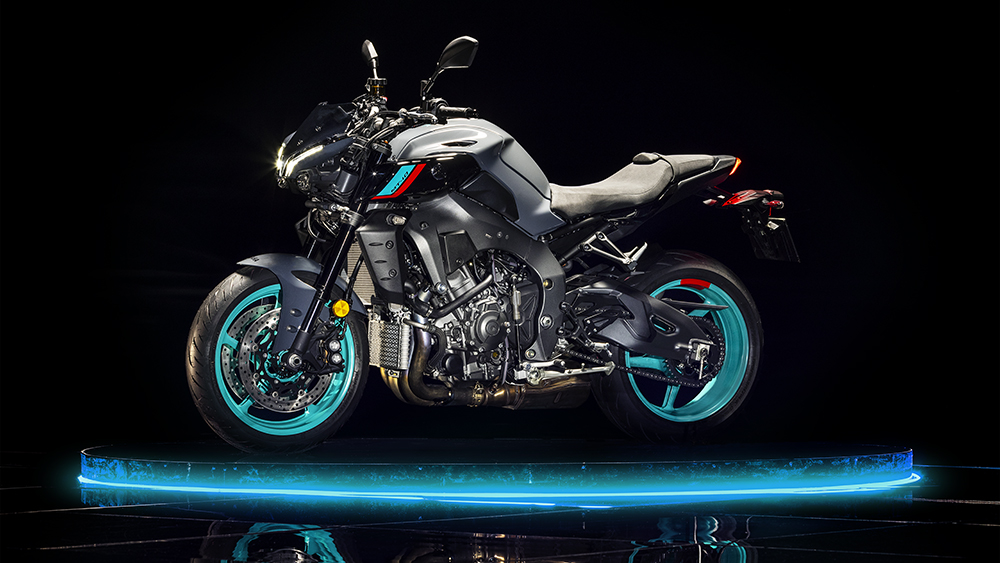 But in recent years it has started to show its age, especially in terms of technology. The MT-10 was always on the thirsty side, too, and by modern standards, the brakes were lacking. That’s where the 2022 version comes in…

It’s not a wholesale update, but it’s an important one. Yamaha has essentially listened to criticism from customers and the press, looked at what the competition is doing, and simply improved the areas that needed updating. Everything else remains as it was. 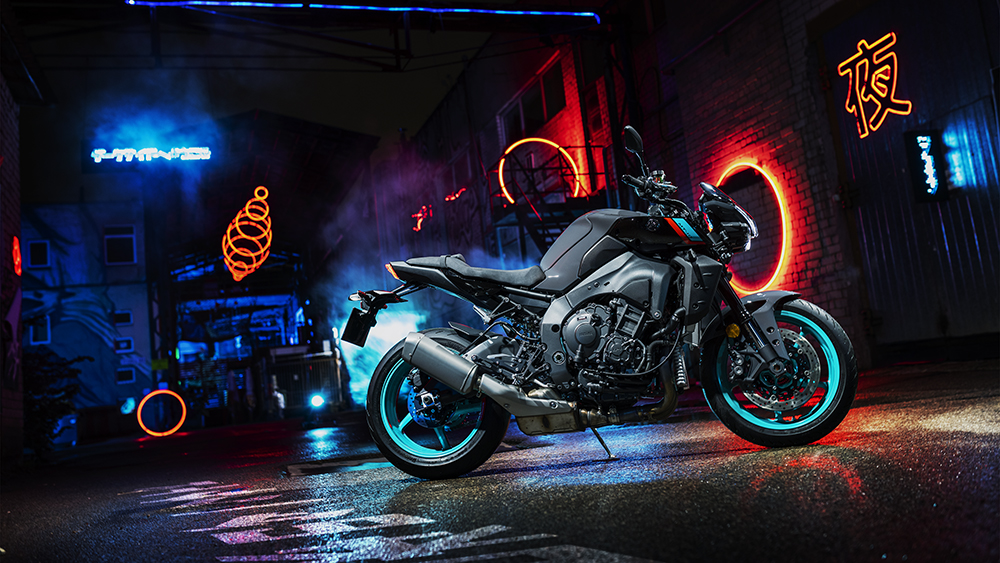 Yamaha admitted it could have produced a 200hp MT-10 to compete with bikes like the Ducati Streetfighter and MV Brutale, but this wasn’t its target. It wanted to keep the crossplane CP4 engine manageable, with tweaks to the power, torque and the much-criticised fuel efficiency. It also wanted to add to the class leading character of the distinctive motor, while maintaining the bike’s relative affordability.

Peak power has increased to 122kW (164hp) at 11,500 rpm, which is 5.5hp up from the old bike. Torque is up slightly too, from 111Nm to 112Nm at the same 9000rpm, and Yamaha claims the engine is 15 percent more efficient than before, with a quoted consumption figure of 6.8L/100km. This has been achieved through new fuelling: the throttle is no longer directly linked, there’s a new intake and airbox configuration and a new exhaust – some of which has been changed for its shiny, new Euro 5 compliance. 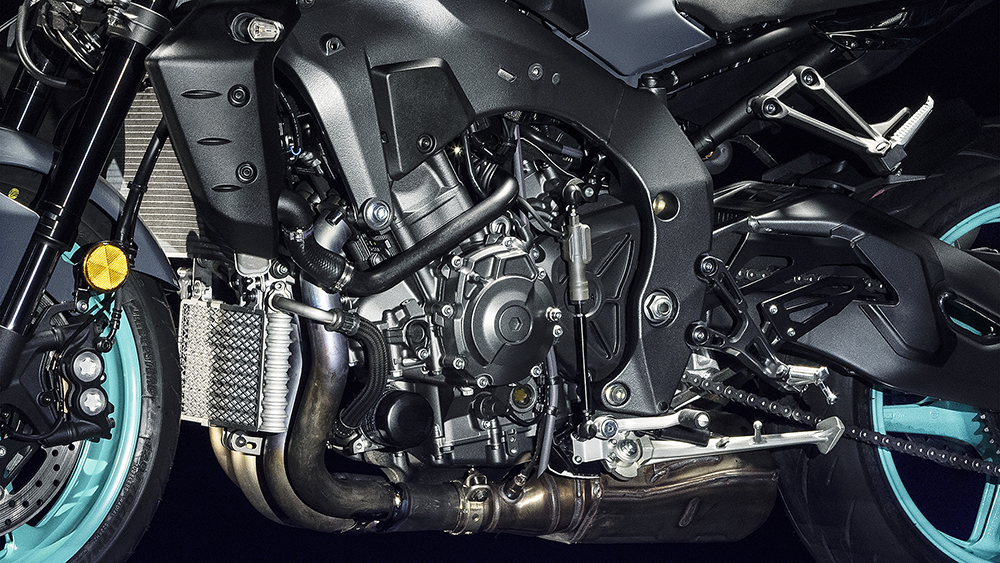 The R1-derived aluminium Deltabox chassis remains unchanged; a good move as it’s fundamentally faultless and not too dissimilar to the one that was so successful in world Superbike last year. Yamaha has tweaked the fully adjustable KYB suspension settings, and the rear shock’s length has increased by 3mm and there is 3mm more spring preload.

Stopping power, which was a weakness of the old bike, has been improved with a Brembo radial master cylinder, and we now have the latest S22 Bridgestone rubber fitted too. 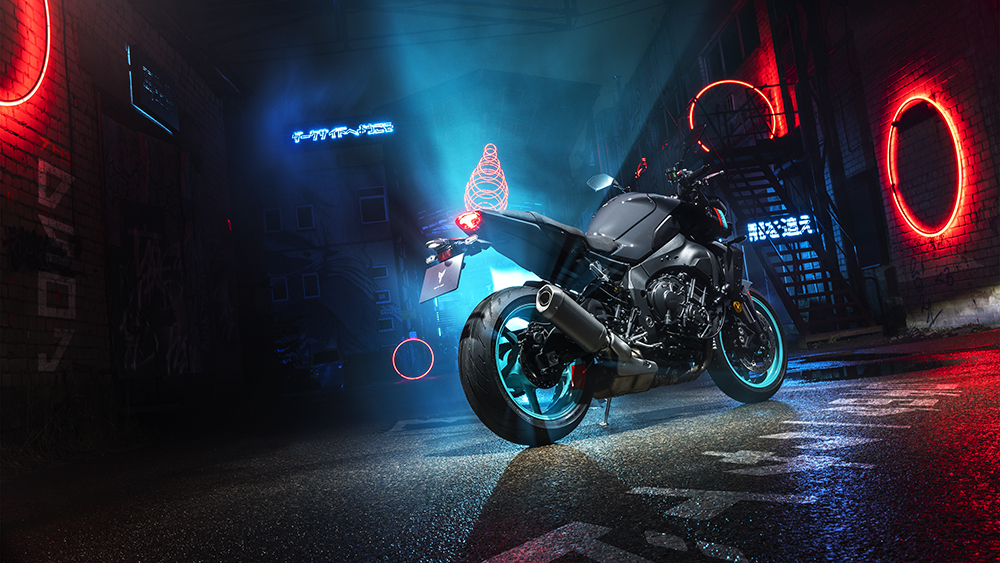 The now ‘old’ Yamaha MT-10 lacks the sophisticated rider aids of the competition but that has been resolved with the implementation of a six-axis IMU, which means all rider aids are lean sensitive. Slide control, traction control, cornering ABS, front wheel lift control and changeable engine brake strategies (as found on the R1) are all present and correct, and linked to the IMU. A two-way quickshifter comes as standard, along with cruise control, a speed limiter and four riding modes. As you’d expect these can be tailored to match the rider and the conditions and, yes, the anti-wheelie can be deactivated. All this is clearly shown via a new, but surprisingly small, 4.2-inch full-colour dash.

The design team has put in the overtime, too, as there’s a completely new headlight, a slimmer subframe, a new rear light section with a high-end finish and a fresh ‘Cyan Storm’ colour scheme. Check out, too, the neat little MT logo on the red strip on the rear wheel. 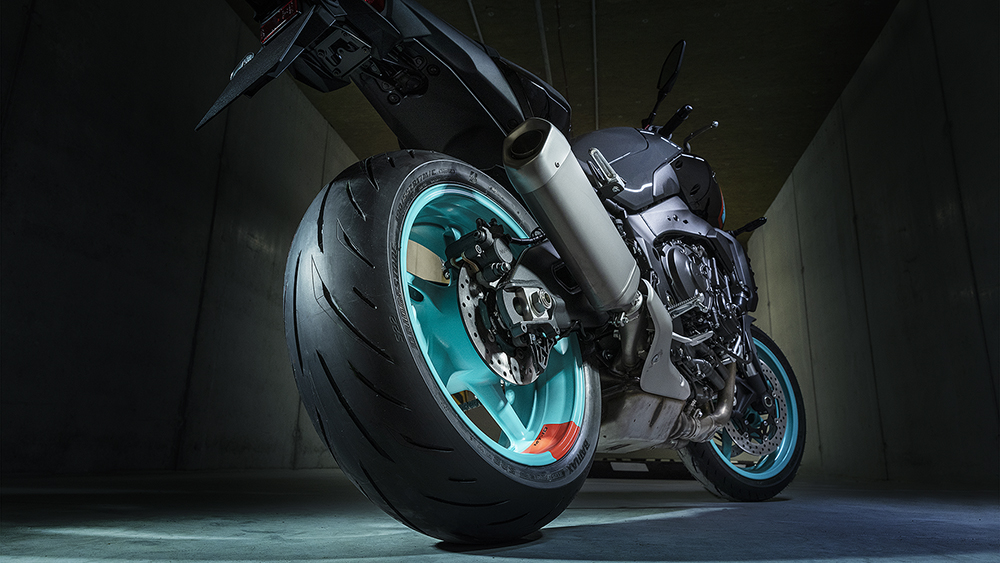 I’ll raise my head above the parapet and declare that, in the metal, I like the new look, especially in Cyan Storm. However, when I mentioned this to an Italian journalist, he nearly choked on his espresso.

But while the styling may split opinions, the MT’s new soundtrack won’t. The CP4 has always had a distinctive, charismatic bark and Yamaha has added to this appeal with a new intake and exhaust system, plus new acoustic sound grills in the tank designed to direct the intake noise to the rider. Before embarking on our 220km test ride, I couldn’t help a few blips of the fly-by-wire throttle – it really does sound good, arguably better than ever. 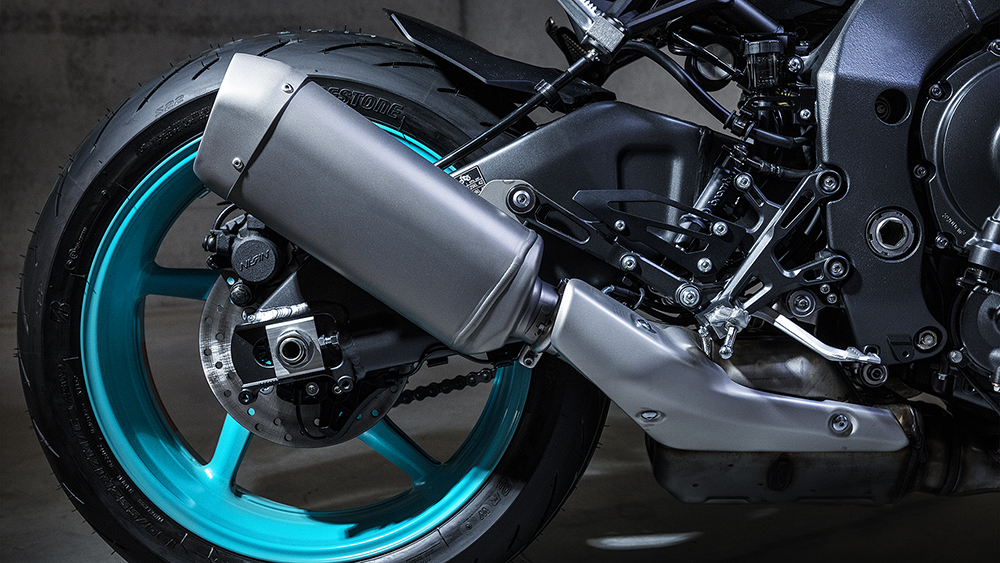 The first part of our journey was in city traffic, not the perfect environment for a naked R1, but opting for the softer fuelling maps made 164 horses more manageable than you might predict. In mode-D, it’s as threatening as an angry kitten. Above 2000rpm and 20km/h, the quickshifter is smooth, too, and the only downside at low speeds – especially for 170cm me – is the seat height which has increased slightly due to the longer shock. Up 10mm to 835mm, it’s a longer reach to the ground, and the seat also feels a tad firmer.

As we left Valencia behind, I hit my first stumbling block. My MT is in low power mode-D and running full rider aids and on the move, I can’t change between modes. I can change the power, then reduce or turn off the rider aids, but I can’t simply flick from mode-D to, say, the full-power mode-B. At the last set of lights before leaving town, I quickly flick into mode-B, which is much more like it. Now the MT-10 is unleashed and suddenly we’re at the real party. 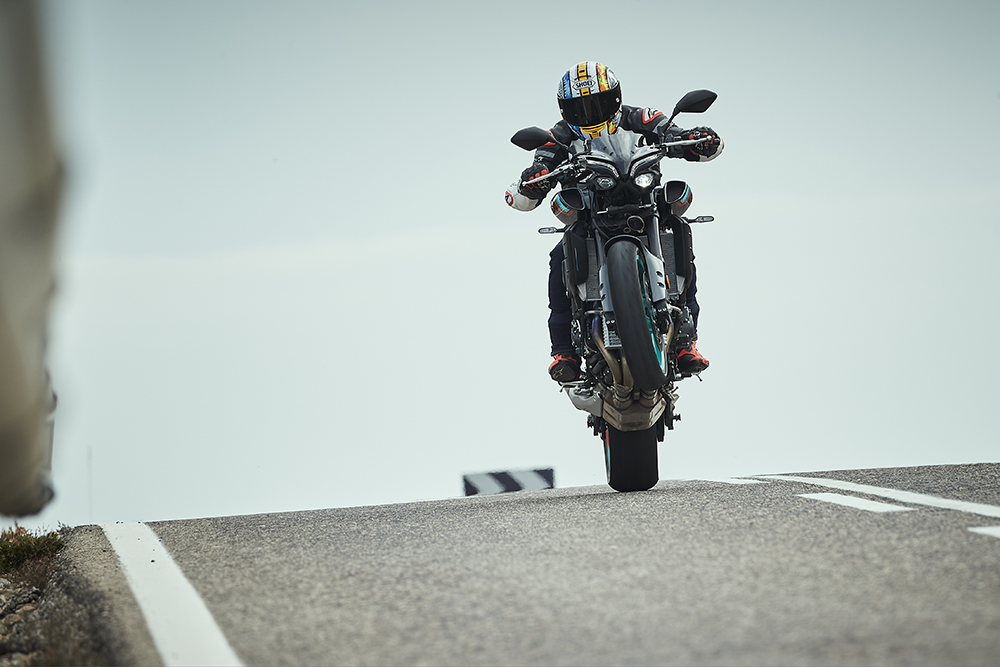 We’ve discussed the new looks, much improved rider aids and the tweaked chassis, but the MT-10’s ace card is the bit Yamaha has virtually left untouched – the engine. Yes, there is a little more torque and power, but to be honest it wasn’t needed. Because 164kW is more than enough on a nakedbike, and the Yamaha delivers torque by the bucketload, like a huge, free-revving V-twin.

It is incredible, and I absolutely love it. You don’t need to chase the revs, instead you dance around in the midrange between 4000rpm and 8000rpm feeling invincible. Traction and drive are class defining and wholly addictive and the MT will lift the front at will in the first three gears. Add a distinctive bark and a slick quickshifter and you’re not far from the perfect sporty engine. An engine that’s utterly suited to the naked market where the last thing you actually need is 200hp. 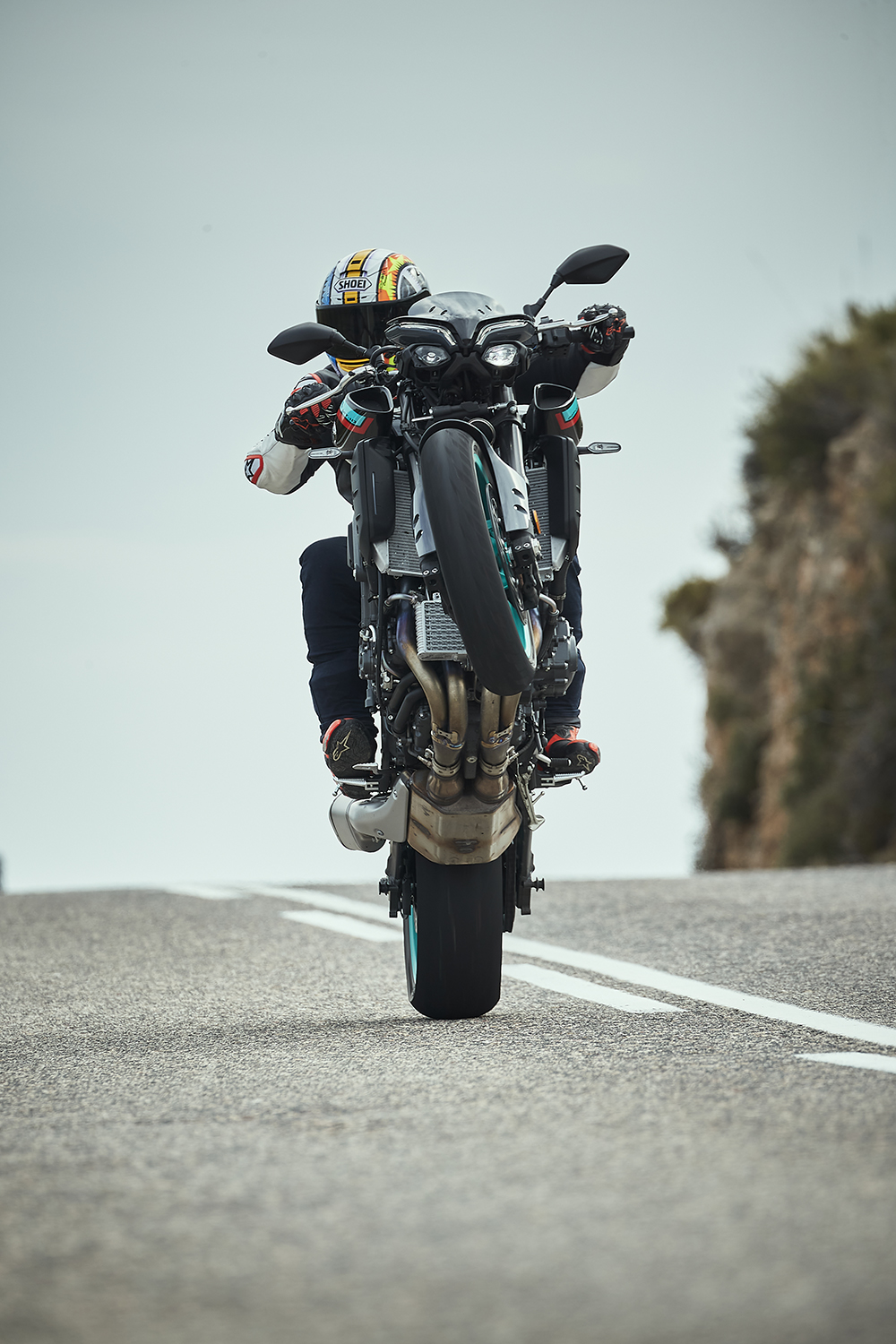 Back to the electronics for a moment. There is a noticeable step between riding modes and, for me, mode-B is the optimum setting. Mode-A isn’t as radical as it once was, but for me it’s still a little sharp for the road, and I spent 85 percent of the day in mode-B. Select either C or D for town or slippery conditions.

The MT-10 has always been perhaps the easiest bike on the market to wheelie. And while the introduction of a six-axis IMU has made the electronics lean-angle sensitive, they don’t hinder the fun. For example, you can switch off the lift-control but leave the slide and traction control active, meaning in slippery conditions you can still wheelie but retain the safety net of slide and traction control. Alternatively, you could just reduce the lift control to its minimum setting, which still allows the front wheel to lift but does so depending on the speed of the lift, gear, road speed and throttle position… it’s an impressive system. 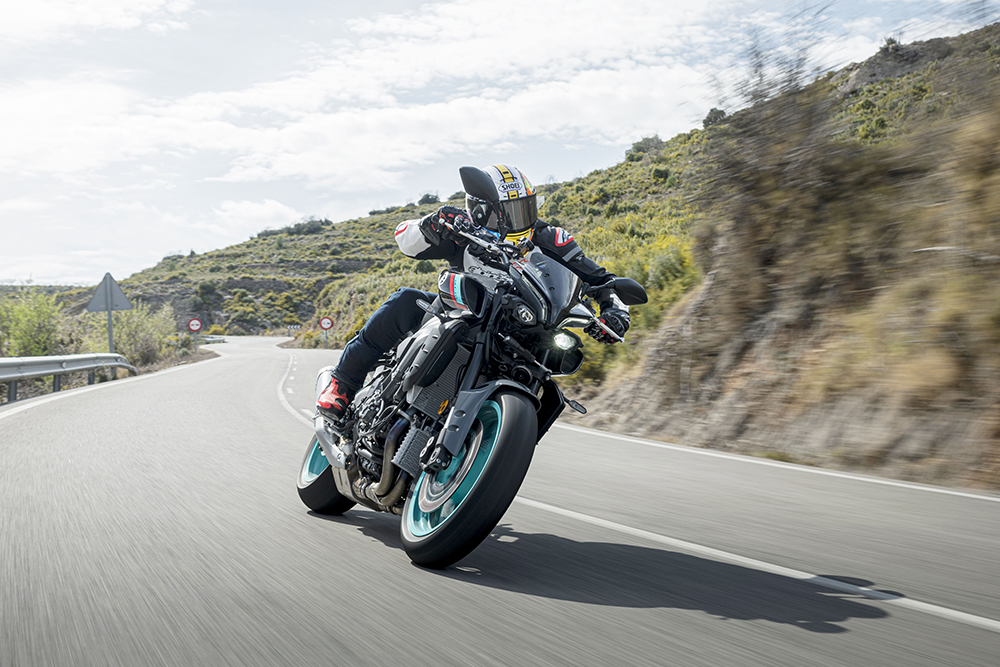 The rider aids are also smoother than before, as is the re-introduction of power after the initial intervention. We had perfect riding conditions in Spain, but with the rider aids reduced it was still possible to slide the rear a fraction on the dusty roads. Feeling the intervention was a welcome addition and by no means hindered the MT-10’s legendary fun.

Cornering ABS is now standard and, like the other aids, is faultless on the road. Yamaha has upped its game and added a Brembo master cylinder, but while braided lines will appear on the SP model be to released later this year, they still do not come as standard on the MT-10 and the four-piston ADVICS calipers remain the same – no Brembo items here. 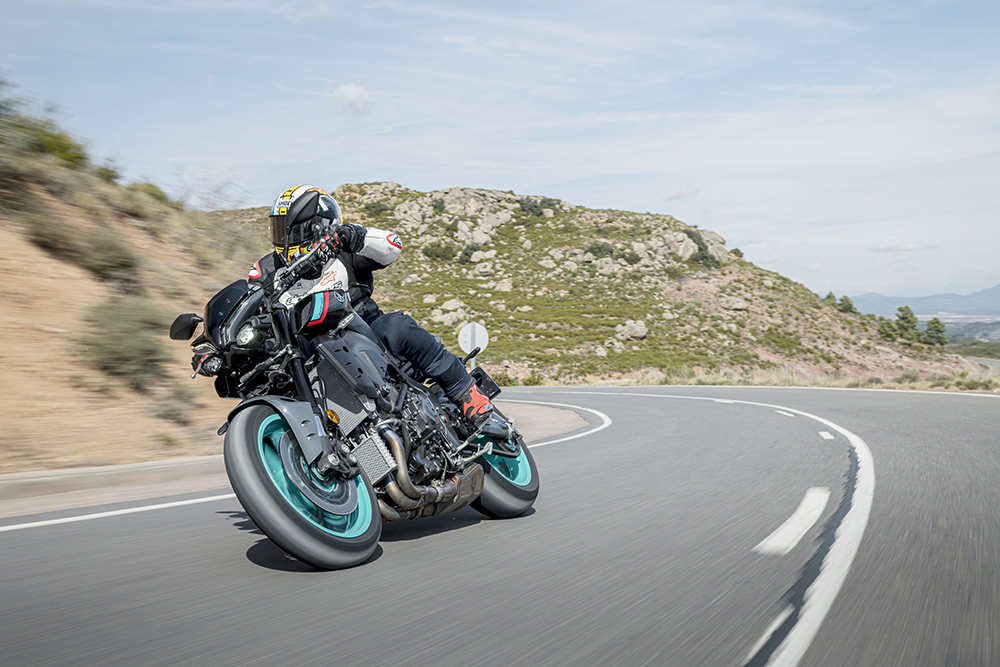 Stopping power has increased – the brakes are sharper – but towards the limit they felt a little wooden. There wasn’t that one-to-one connection you get with the very latest Brembo stoppers fitted to the high-end bikes in this class.

It’s a similar story with the suspension. Yamaha has raised the rear ride height and compensated with minor changes to the front. For 90 percent of the ride there are no issues, and the new Bridgestone S22 rubber is a big improvement. The ride is excellent on the motorway and the MT-10 soaks up imperfections around town with ease. In the mountains, around the countless twists and turns, I had the confidence to lay the MT-10 on its side on unknown roads – it is one of those bikes that instills confidence and always feels easy to ride at pace. For a bike weighing 212kg, it turns into corners with precision and balance, and the rider aids and mechanical grip allow you to dial in that incredible torque earlier and earlier. 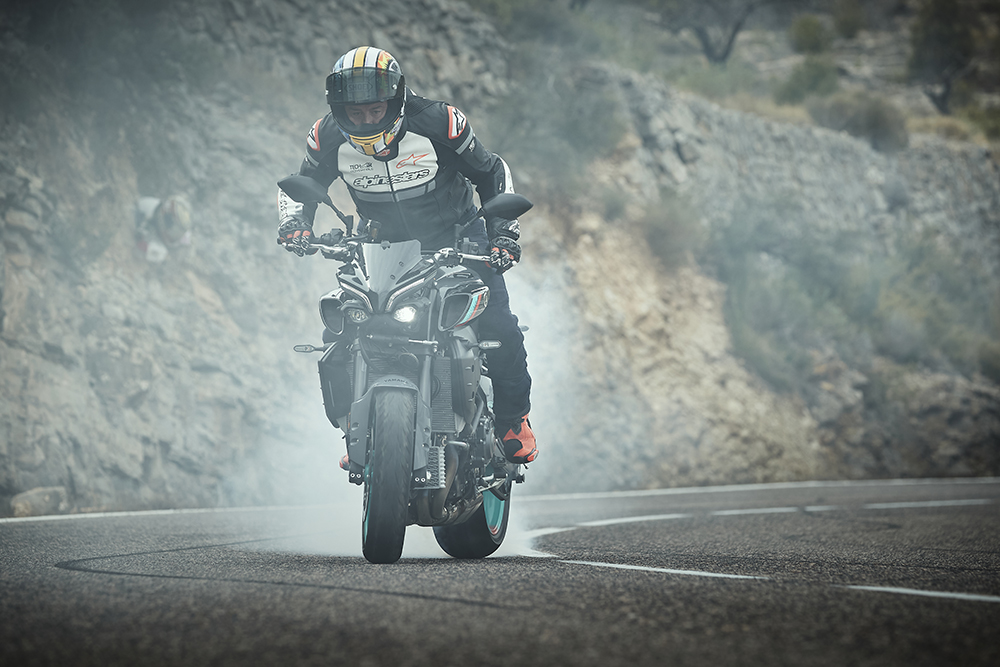 When you flick between turns or make a direction change at high speed, the MT-10 is not as lively or responsive as, say, BMW’S 194kg
S 1000 R, but that extra bulk does give a reassuring feel and stability. Interestingly, the wheelbase is now a fraction longer due to the smaller rear sprocket (introduced to reduce the lively engine feel, and give a lower rpm when touring) but it’s still shorter than the MT-09.

It was in that last 20 percent of the fork’s stroke, the last bit when you’re really pushing, that I wanted a little more front-end feedback – and possibly a slightly softer front-end – which usually translates more feedback to the rider – would have helped. I suspect Yamaha has raised the rear-end a fraction to quicken the steering, but was then forced to increase the front damping to compensate for the weight transfer – some lighter riders may want a softer set-up. 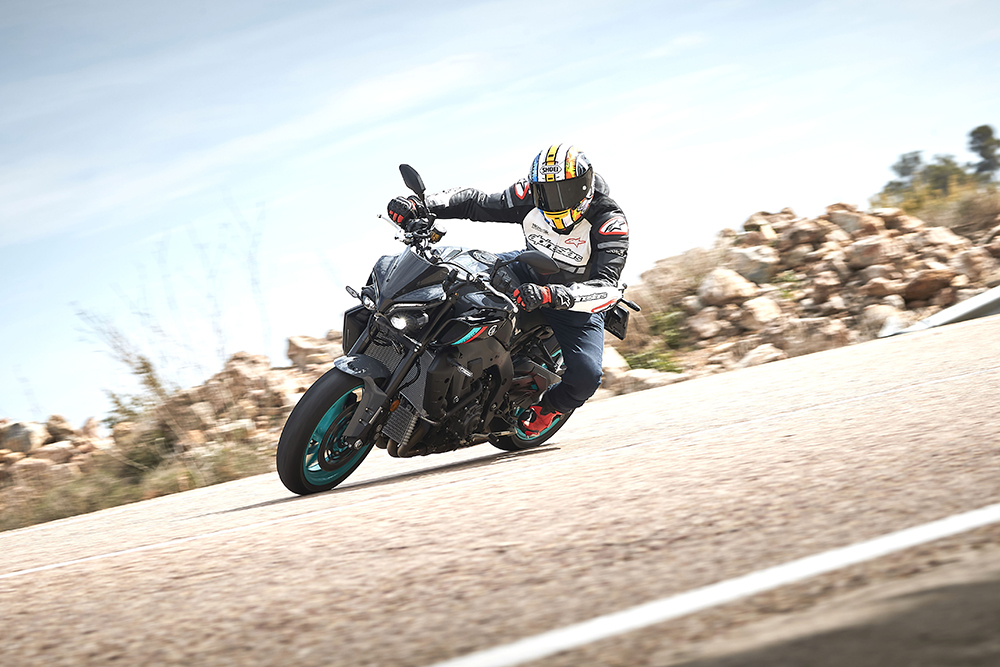 Yamaha has changed the exhaust, and airbox, and added new acoustic sound grills above the tank, but tank capacity remains at 17 litres. Without riding the old bike back-to-back with the new model, it’s hard to judge how much it has improved the bike’s sound – but it does sound good for a Euro 5 bike, and fuel efficiency appears to have improved – I managed 7.6L/100km after a spirited ride.

Instead of searching for more power to win the bragging-rights war, Yamaha has focused on the old bike’s weak points and has made significant gains. The rider aids are a big step up and haven’t diminished the fun. The brakes are stronger and now have lean-angle sensitive ABS in support, while the CP4 crossplane engine is more efficient, sounds better and has even more accessible torque. If you rate a bike on smiles and how it makes you feel then you must score the MT-10 very highly. 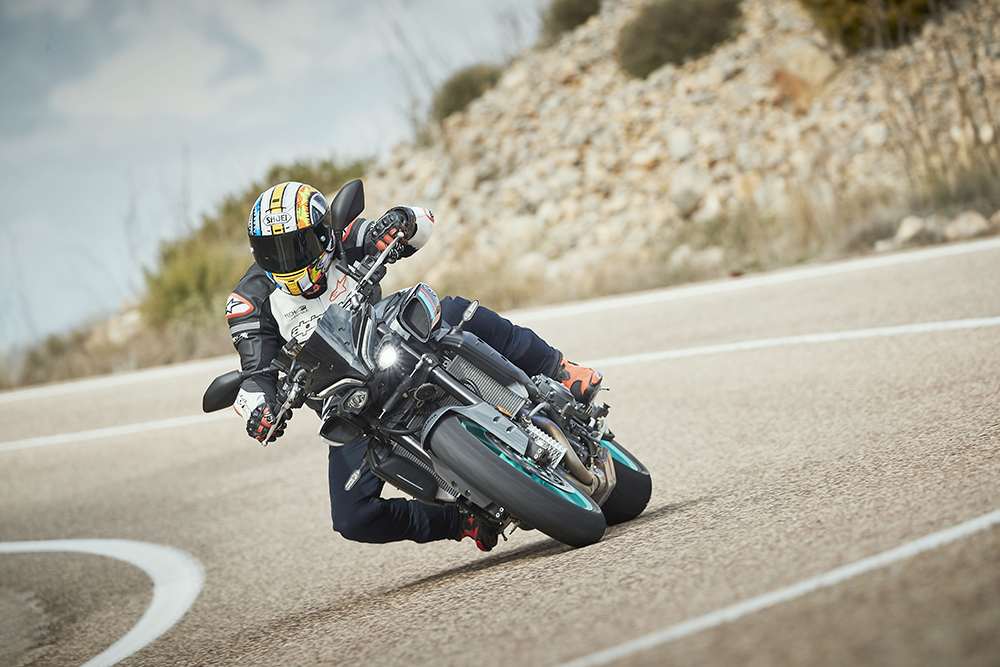 The MT exudes a quality feel, despite its relatively small TFT dash. Suspension can be tailored to match the ride and I’d want a little more feel, but it really is hard to fault. There is little doubt the new MT-10 should continue to be a success for Yamaha. 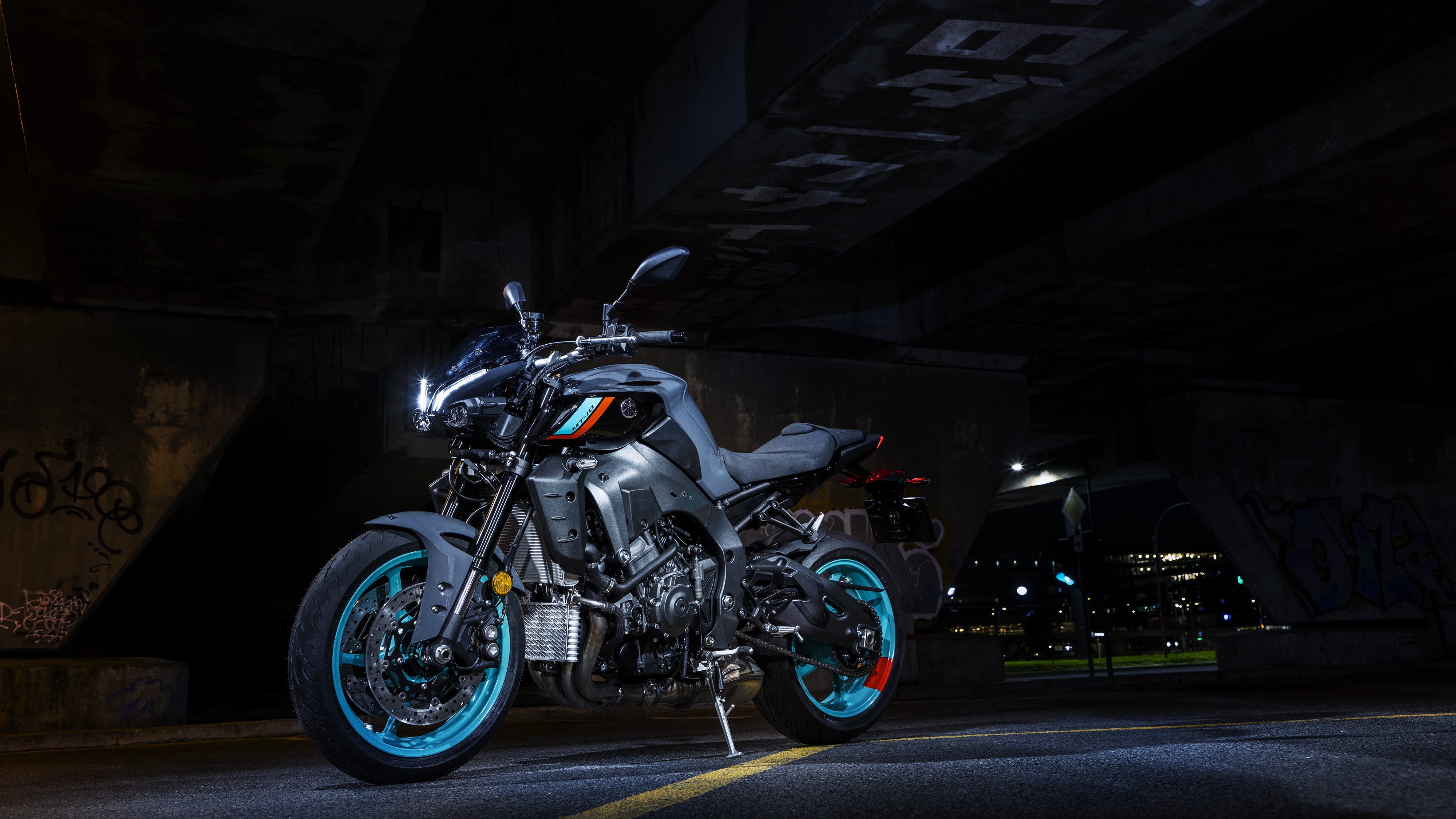 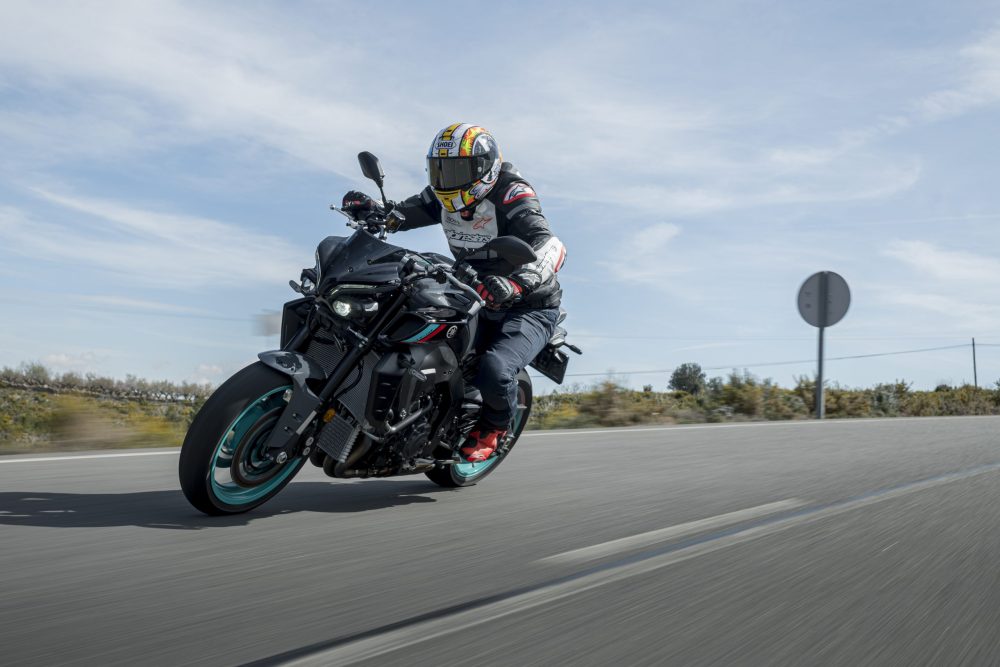