A decade ago the Yamaha XT1200ZE Super Ténéré was the talk of the town, these days it seems like a bit of a recluse. We set out to find out why

Yamaha’s flagship adventure bike arrived on the scene in 2010 and I remember it generating more than its fair share of excitement. I was right into adventure bikes at the time and in the lead up to the release of the XT1200ZE Super Ténéré, there was lots of chatter around the bike trade. My memory says the fanfare lasted for a time after its release and then the big Ténéré seemed to just fade from thought.

Very little changed between the time of its release and the launch of the 2017 upgrade, which most noticeably now sported electronically adjustable suspension. The Super Ten’s looks were modestly updated, but apart from that and a few other minor changes, it retained the same 1199cc water-cooled parallel twin with a 270-degree crank and steel tube backbone frame. The Super Ten’s donk continued to spit out 82.4kW at 7250rpm and 117Nm – figures that became increasingly overshadowed by the likes of KTM, BMW, Honda and Triumph. Sure, it’s less expensive than that lot, but it’s far from cheap. And is it worth the $25,199 price tag if it’s not in the game? That’s what we’re here to find out. 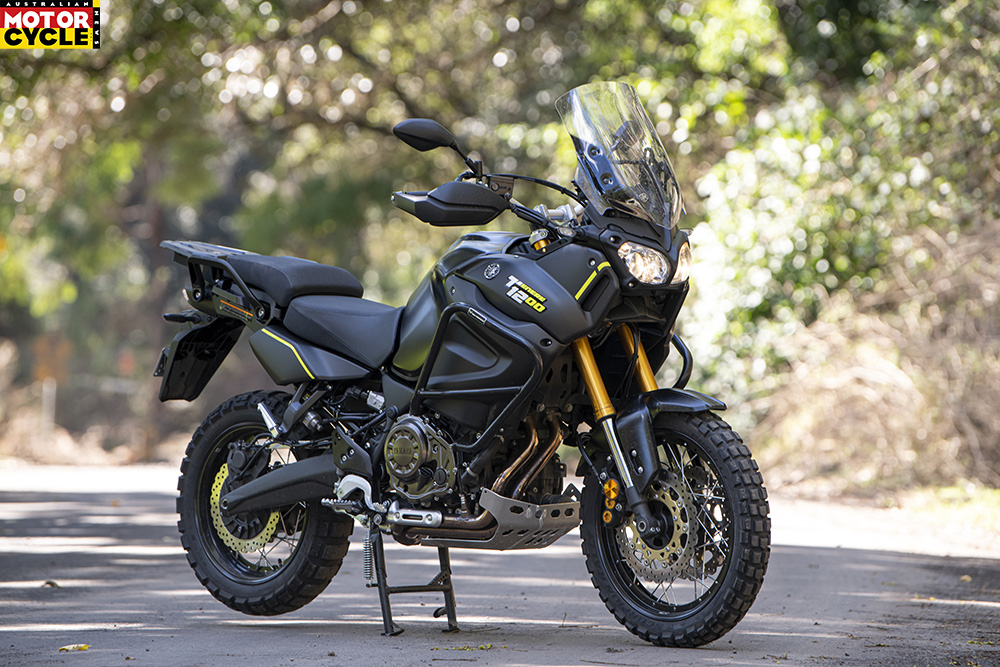 It’s a big bike to behold from afar and that doesn’t change when you straddle the Ten. You sit in it rather than on it and you feel a long way back from the front wheel. The comfortable and well-shaped two-piece seat sits 870mm off the ground with the ability to adjust the rider’s section down a further 25mm if required.

I stand 186cm tall and with the seat on the highest setting, it’s an easy reach to the ground. That’s aided further by the rear suspension sag when I place my chunky arse on the seat. 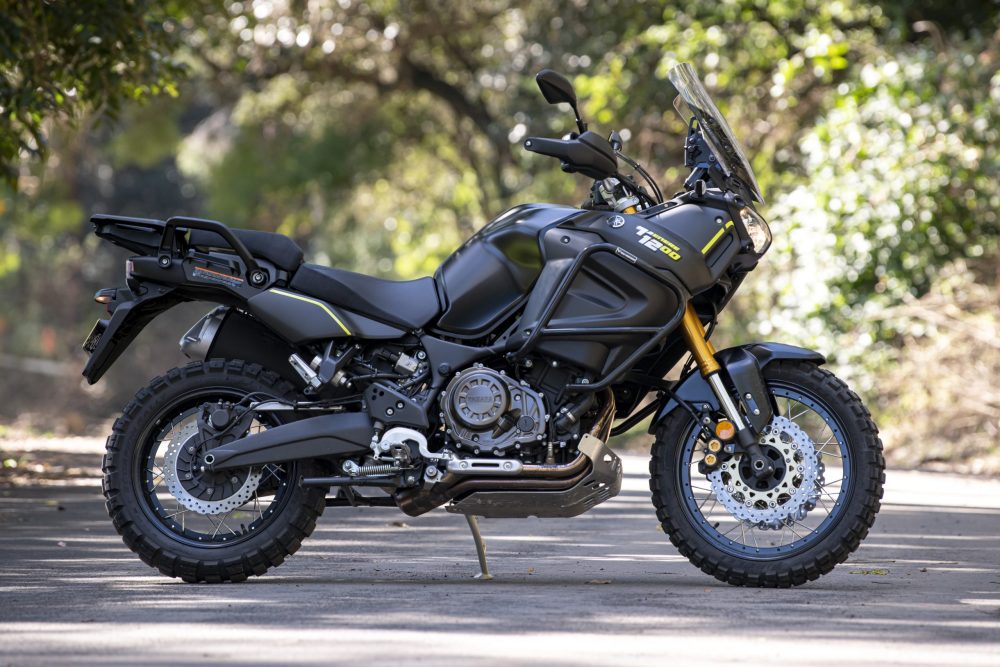 The Super Ténéré weighs in at a claimed 265kg with its 23-litre tank full, and when you’re trying to push it around or get it off the factory fitted centrestand it sure feels like it, too. However, Yamaha has done a good job of getting the weight to sit low within the frame, and once you’re rolling it feels far lighter than it is.

All gadgetry in the Ten’s armament are accessed via the menu button on the left-hand switchblock, apart from the mode button, which resides on the right. Information is displayed on the dual-screen LCD display – old school these days it may be, but it does the job and is easy to use and see. 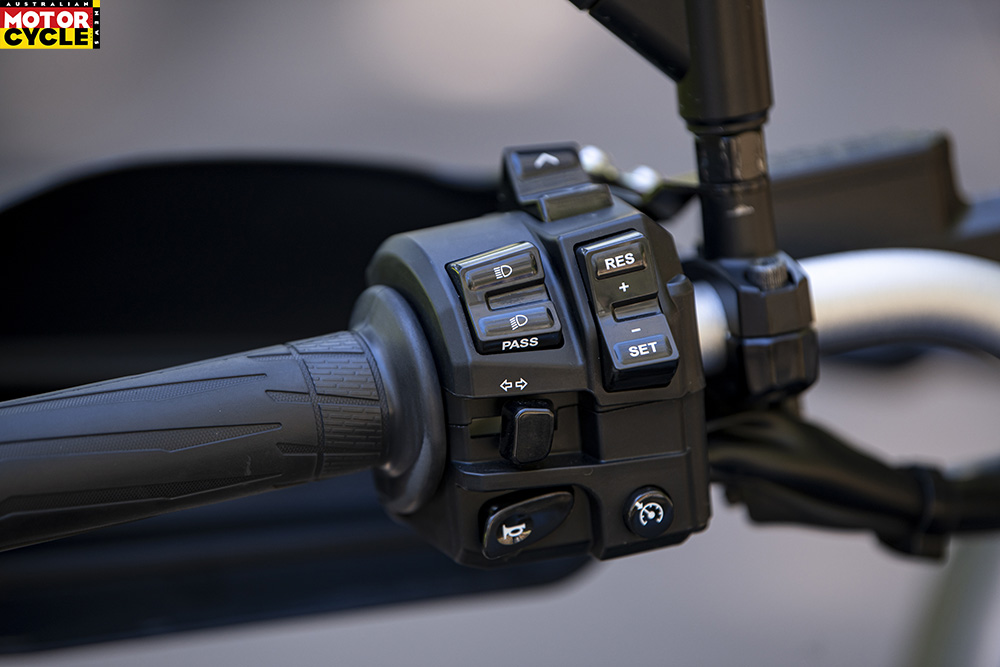 There are two riding modes available; Touring and Sport mode. Touring mode offers softer power delivery and is the pick between the two when scooting through the bush, as it is if you’re commuting or, funnily enough, when you’re touring.

Sport mode is perfect if you’re carving through the twisties on your favourite back road, or hooning, but I found the throttle response pretty abrupt, especially in the loose stuff where the skinny 150/80-17 rear tyre struggles to get the power to the ground, and the switchable traction control system has its warning light throwing fits. 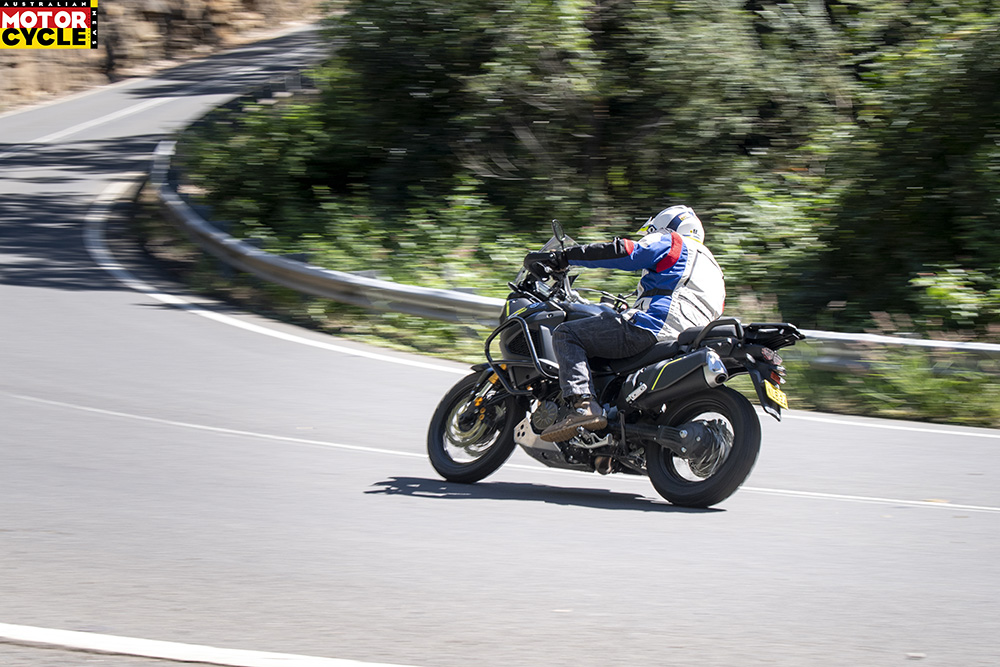 Our test bike was fitted with a set of Pirelli Scorpion Rally tyres that work bloody well in the dirt and help get some of the power down, but I reckon the OEM Bridgestone Trail Wings would struggle to make sense of Sport mode in loose off-road conditions.

The Ténéré’s powerplant feels doughy off the bottom and is slow to spool up and start laying down some proper power. The shift from doughy to ‘oh yeah I’m on an 1199cc’ is sudden and I suspect that power is limited in the lower rev range in Touring mode then wakes up around the 5000rpm mark when things start to get interesting. And if you keep it on the boil and swiftly shift through the six-speed gearbox you can find yourself careening wide-eyed towards a corner at warp speed. 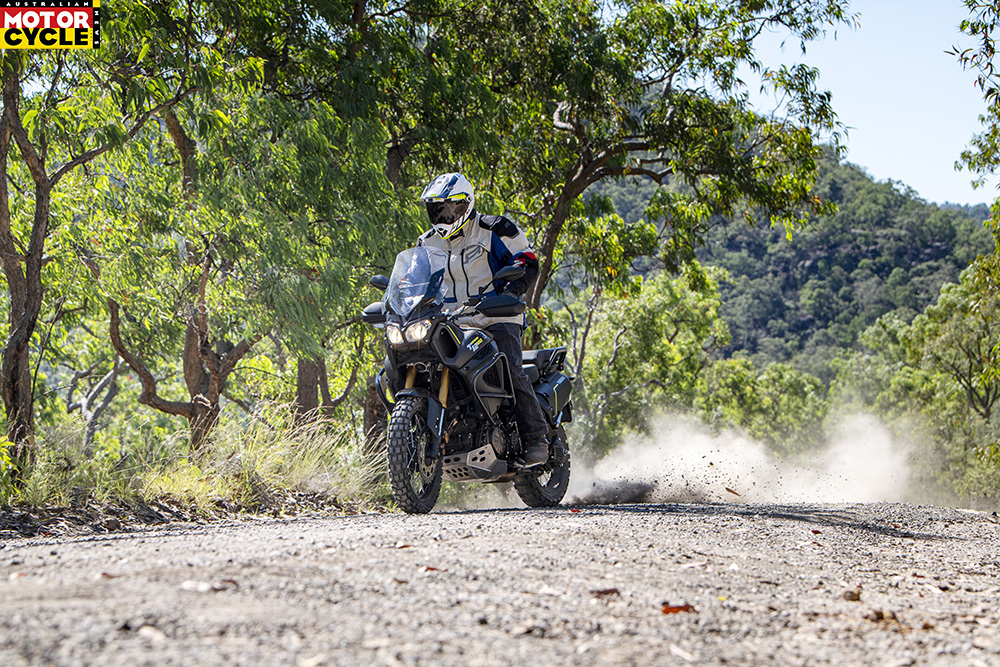 When you’re on a 265kg rocketship you want good brakes and the Ten has you acceptably covered with ABS-equipped and R1-derived four-piston calipers mated to a big set of 310mm discs up front and single-piston caliper on the rear matched to a large 282mm disc. The braking system is linked so a tug on the front brake will also apply braking at the rear. Disappointingly, the ABS is non-switchable, which is a sign of its age, and when off-road the ICU lacks the brainpower to deal with the loss of traction on loose surfaces. I know, because when I called on the brakes at speed on a fire trail and the ABS detected slippage and removed braking pressure, I went spearing into the shrubs. Gee, thanks. 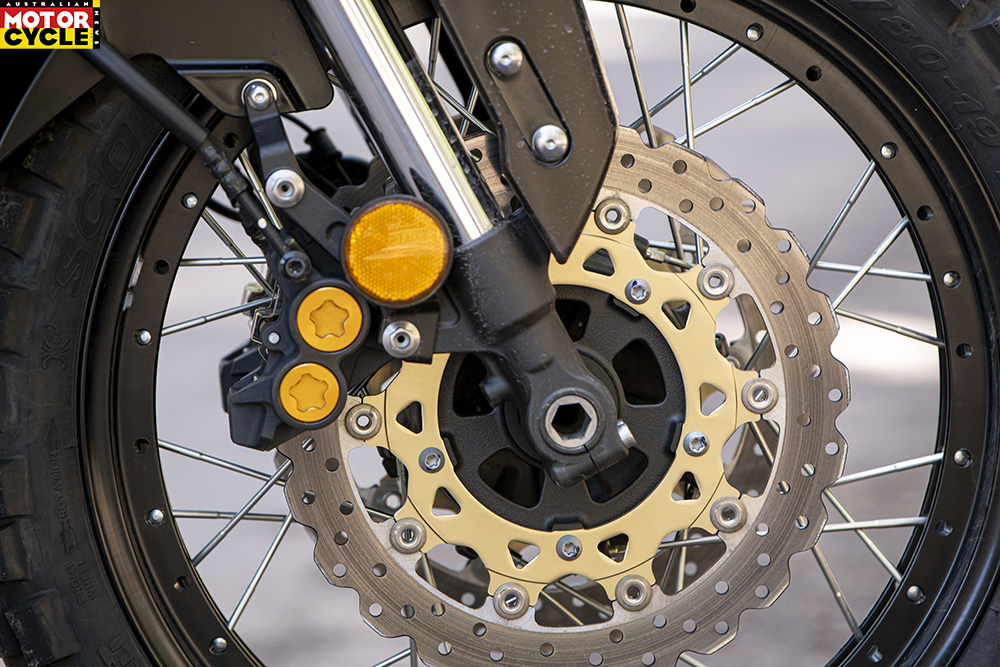 In saying that, the Ten’s brake setup is something you would have found on an open-class sportsbike a few years back and while braking is adequate, it’s falling behind the competition. A change of pads may improve bite, power, and feel, as would a set of braided brake lines – why are we still saying this in 2021? If I’m forking out 25,199 clams, I don’t want brake lines made of the same material that adorned my DT175. 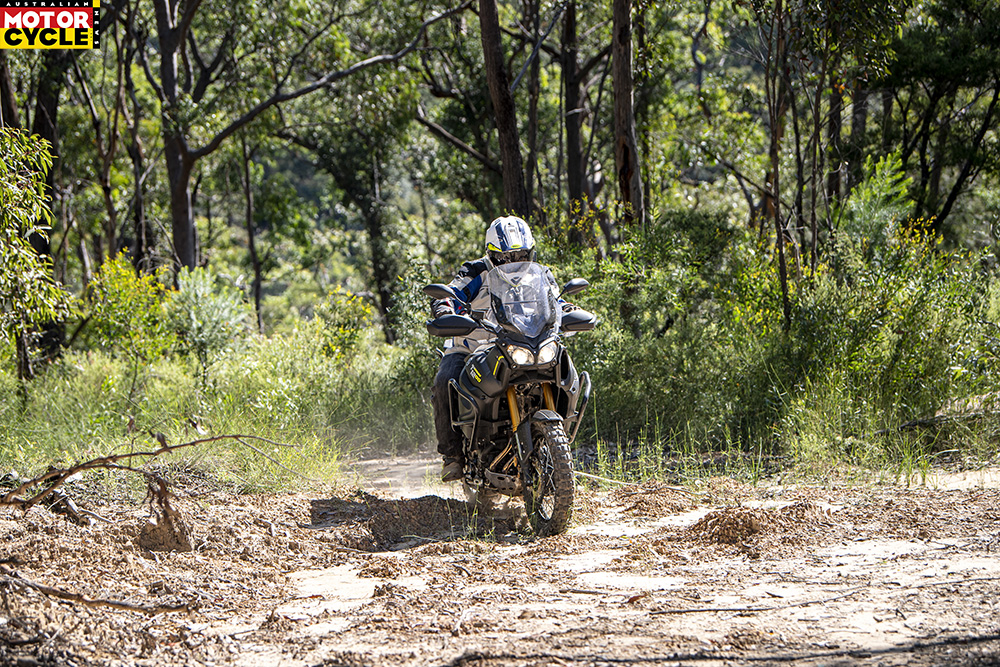 The KYB electronically adjustable suspension offers three preset damping settings (Soft, Standard and Hard), four settings for preload, and a range of customisable inputs to fine-tune the damping for the ride ahead. To be clear, it’s not an active system like you find on today’s top-shelf machines, it simply swaps tools for buttons when it comes time to tweak the clickers. For the type of riding that I did and for my weight, I was happy with the preprogrammed Hard setting (there are three levels of adjustment within the three presets, if you need it) for both road and off-road, which I found to be the best compromise between comfort and performance. 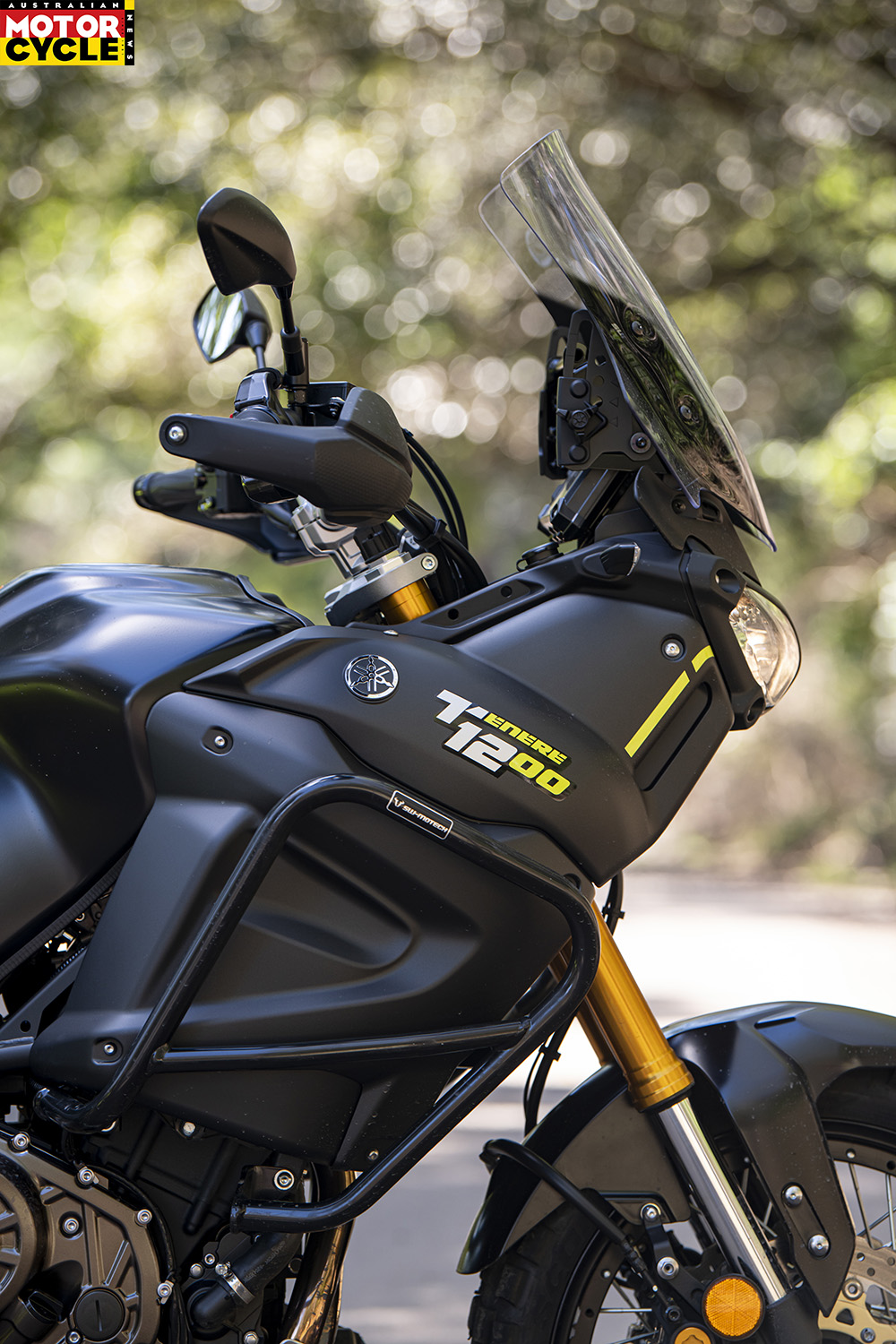 Despite opting for the hardest setting, I found the limits of suspension travel relatively easily if I put too much air between the wheels and the ground. Similarly, punting the Ten around the twisties I found the damping on the soft side and changes of direction took a bit of heft to get the arse up and over to the other side of the rear shock.

What the Ten does do really well is tour, which would be the intention of most would-be owners. The suspension provides an ultra-smooth ride, ergonomics are bang on for the long haul and the adjustable screen and voluptuous fairing provide excellent protection from the elements. 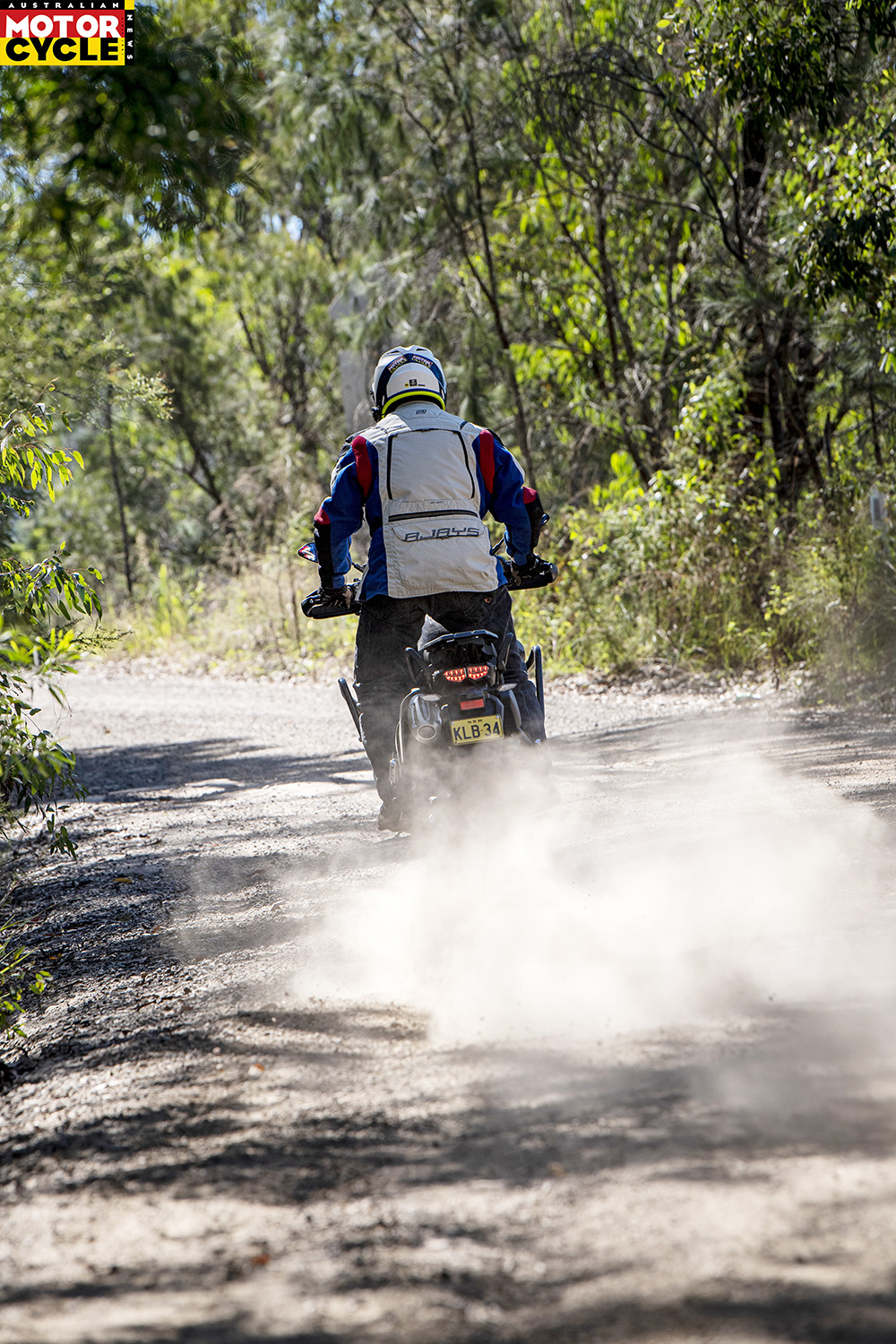 The seat is seriously comfortable and pillion accommodation looks loungeroom worthy. With cruise control and a big fuel payload, the Ten is capable of going anywhere. My only gripe is that my knees rub on the fairing where it meets the tank and while the pressure isn’t enough to hurt, it doesn’t bode well for the paintwork’s future, especially when you get crud between the two. 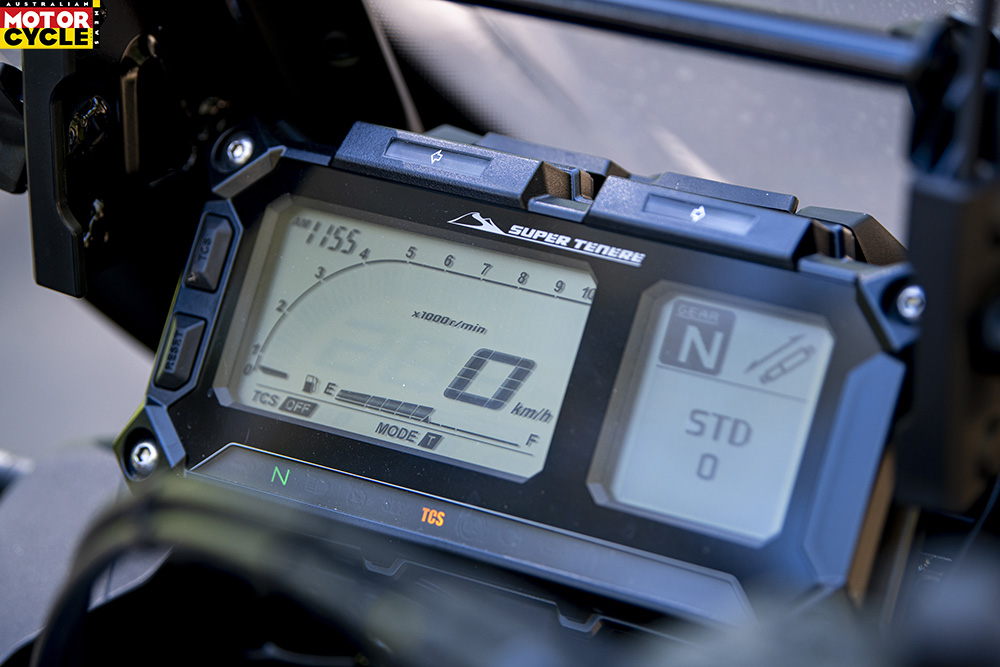 The seating position doesn’t allow you to get your bodyweight over the front wheel when you’re off-road, so getting up on the ’pegs is the safest and most controlled way of getting the Ten along the dirt, as it is with any off-road bike. Being up on the ’pegs feels quite natural and well thought out for the most part – the ’bars are nice and high, and once adjusted properly, the levers and pedals are easy to reach. It’s easy to grip the bike with the inside of your boots and moving around is easy until you want to heavily weight the rear. Admittedly I have rather large boots but the location of the exhaust cover on the right-hand side restricted the movement of my foot when standing and jagged the back of my boot when shifting my weight backwards. 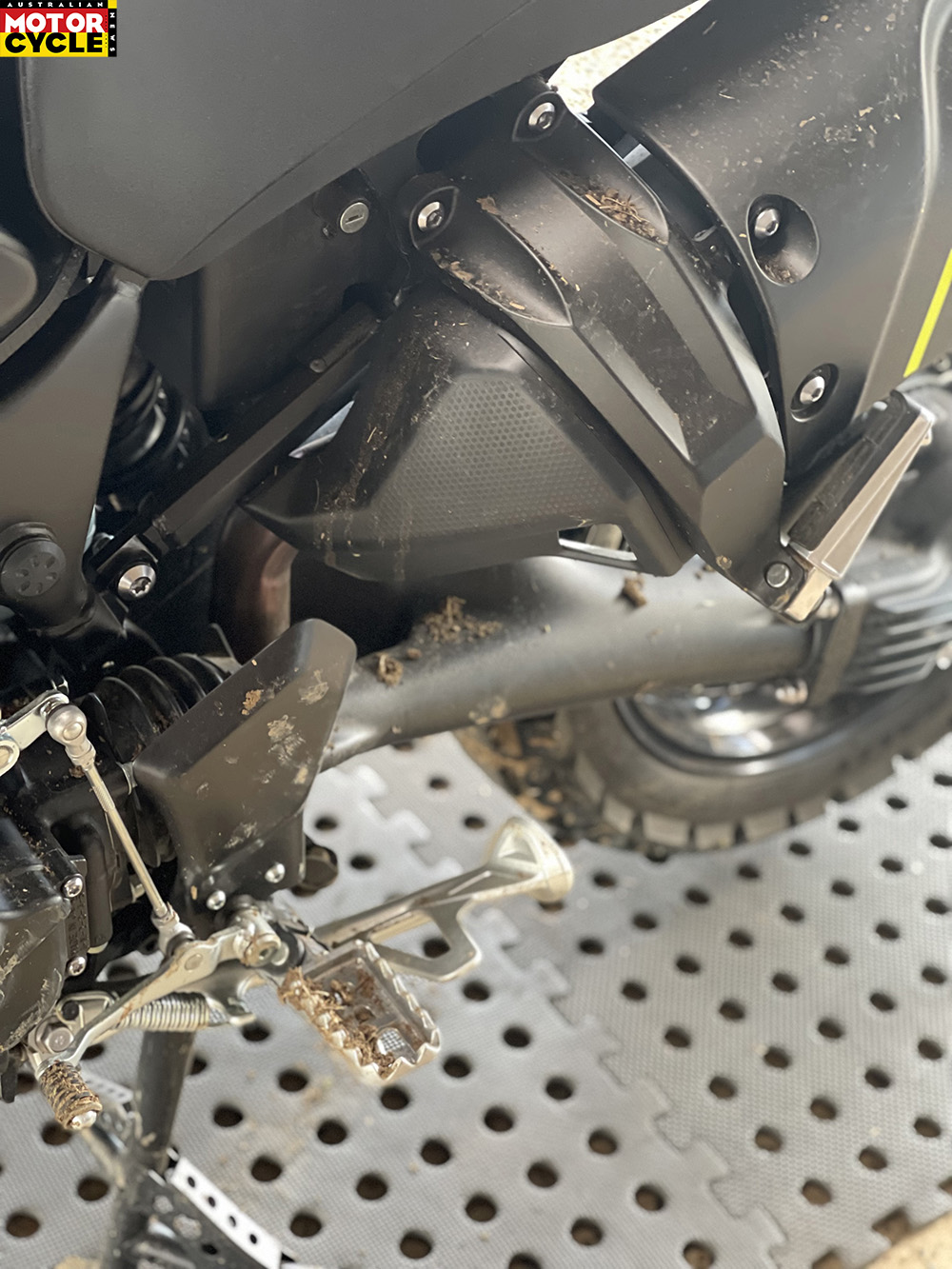 So, after 11 years is the Super Ténéré still able to fight it out with the top of the Adventure bike market? Well, no it can’t. It’s outgunned in nearly every department by the likes of KTM’s 1290 Super Adventure, Ducati’s Multistrada V4 S and BMW’s
R 1250 GS Adventure.

But it must also be noted that if you head out to buy one of those three bikes and come home with the Ten, you’ll also come home with a big fist full of $50s. I think of the Super Ténéré as an Adventure tourer, it’s so comfortable and capable of reeling off big kilometres it could easily be set up as a tourer with just a set of bags and some heated grips. On the other hand, it’ll still head off the beaten track – no worries. 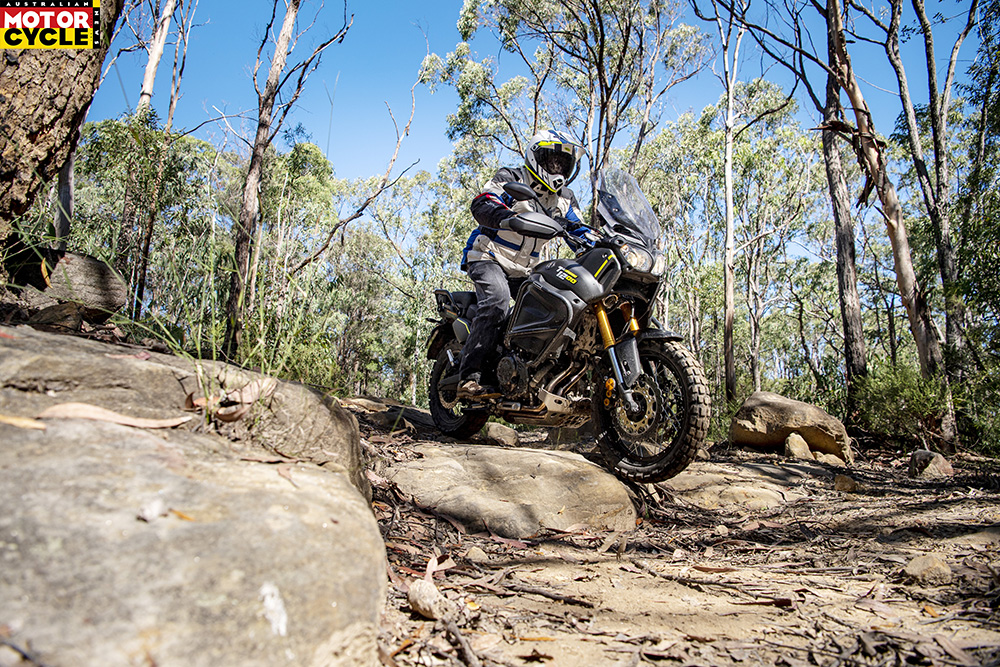 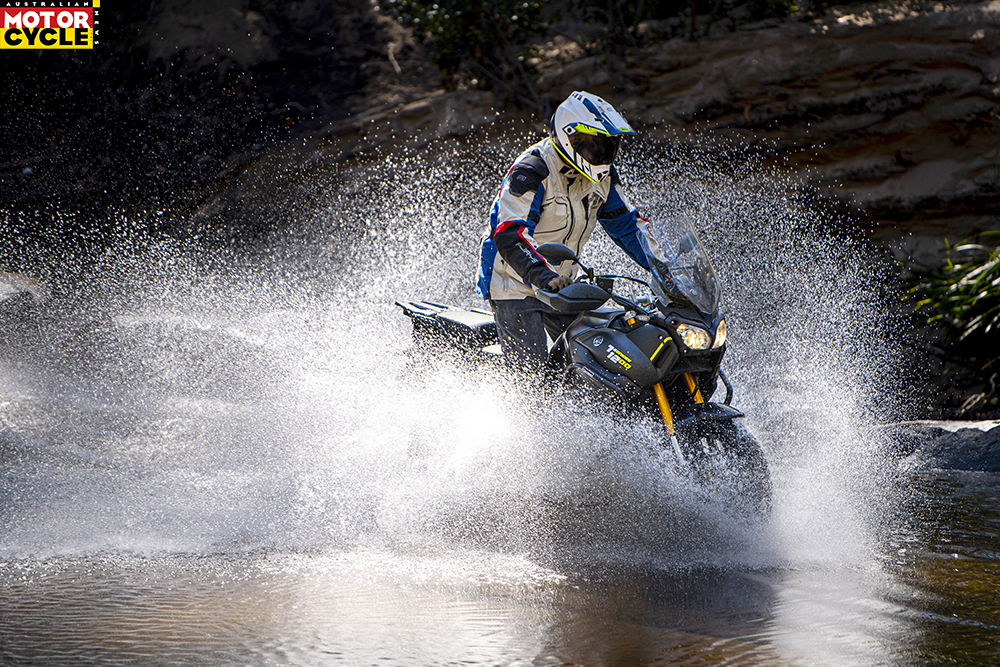