To say the TRK 502 was a sales hit would be putting it mildly. It’s been a global sell-out, with Benelli delivering 7000 examples in Europe alone in the past 12 months, and 15,000 globally – including in Australia, Asia and South America, but not yet the USA.

Well equipped and evidently well engineered, judging by the positive posts on social media from so many of its customers, this mid-sized adventure tourer is a huge amount of motorcycle for the money, costing just $9390 on the road.

Developed in Italy, the bike is manufactured in China under the watchfull eye of the Italians, providing the crucial edge on showroom price . 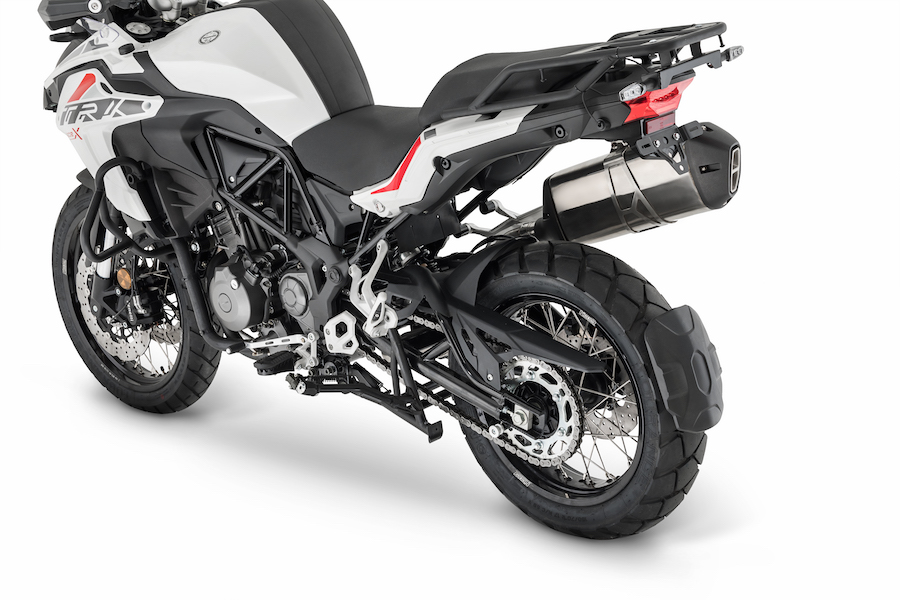 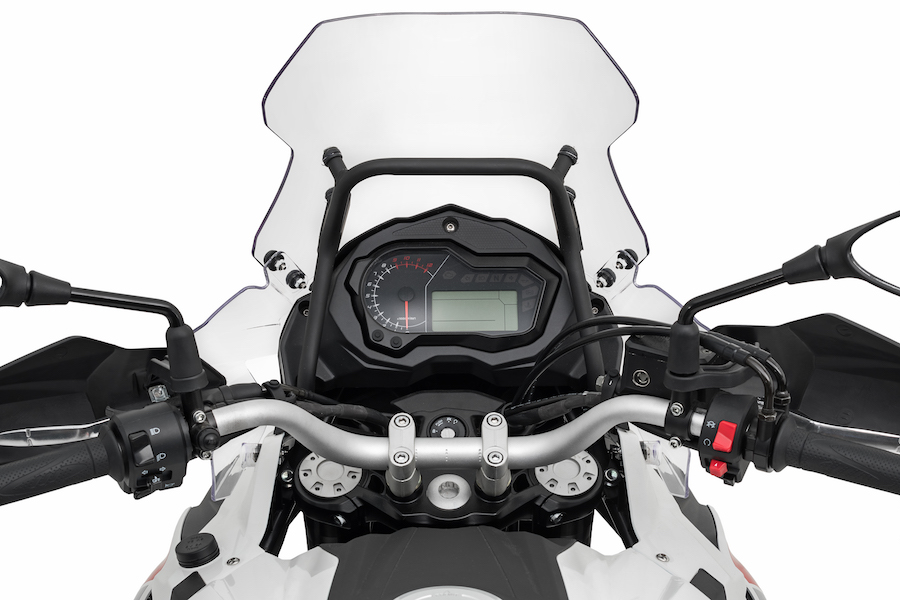 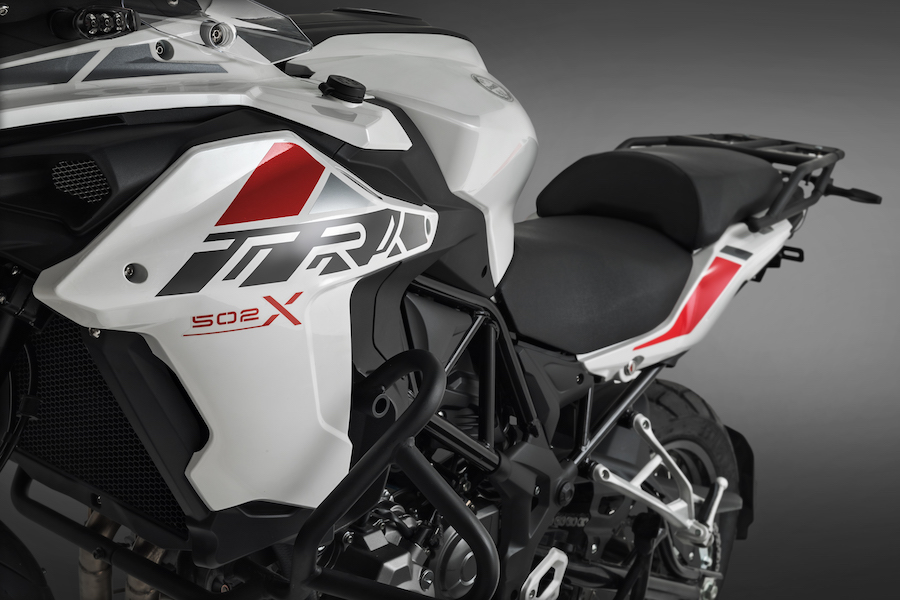 Now the original strong-selling tarmac-focused version has been joined by the TRK 502 X, a more ruggedly equipped true dual-purpose model launched at the EICMA Milan Show last November. The first shipments have now arrived in Australia, where they’re available in white, grey and red.  In Europe, where the model has been on showroom floors for a few weeks, it has already sold out at the same killer price as the original model.

The chance to ride it over a rugged 120km route leading inland from Benelli’s Pesaro base on the Adriatic coast to the foothills of the Appennine mountains, similar to the route on which I sampled its predecessor, the TRK 502, a year ago, only this time with a short but challenging off-road section along Italy’s famed strade bianche – white dirt roads equivalent to the red outback roads of Down Under – gave me the chance to compare and contrast this latest variant of Benelli’s twin-cylinder success story.

Together with the Leoncino 502 roadster also launched last year, the TRK 502 duo are the first of a range of new middleweight models to come from Benelli using the same all-new liquid-cooled eight-valve parallel-twin BN 502 engine, which measures 69 x 66.8mm for a capacity of 499.6cc. 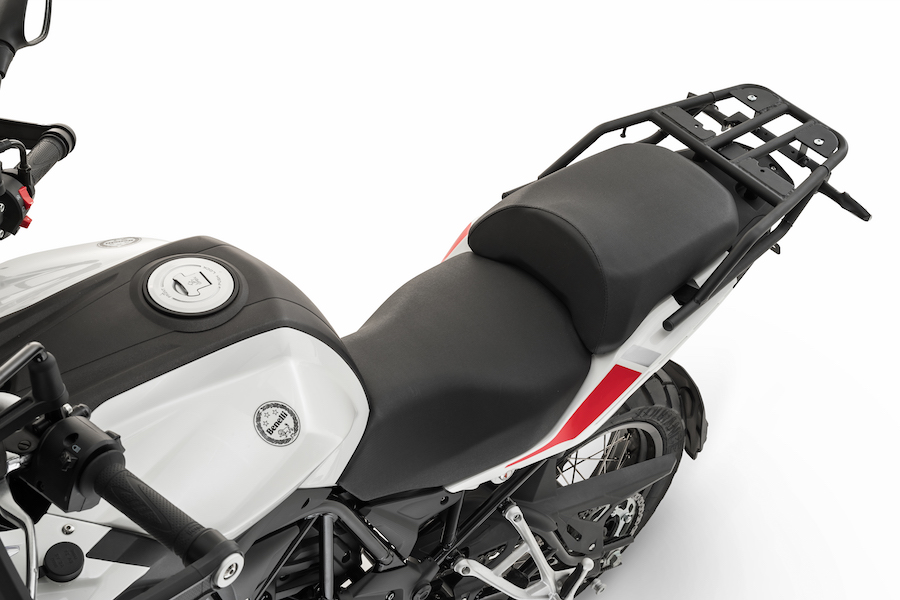 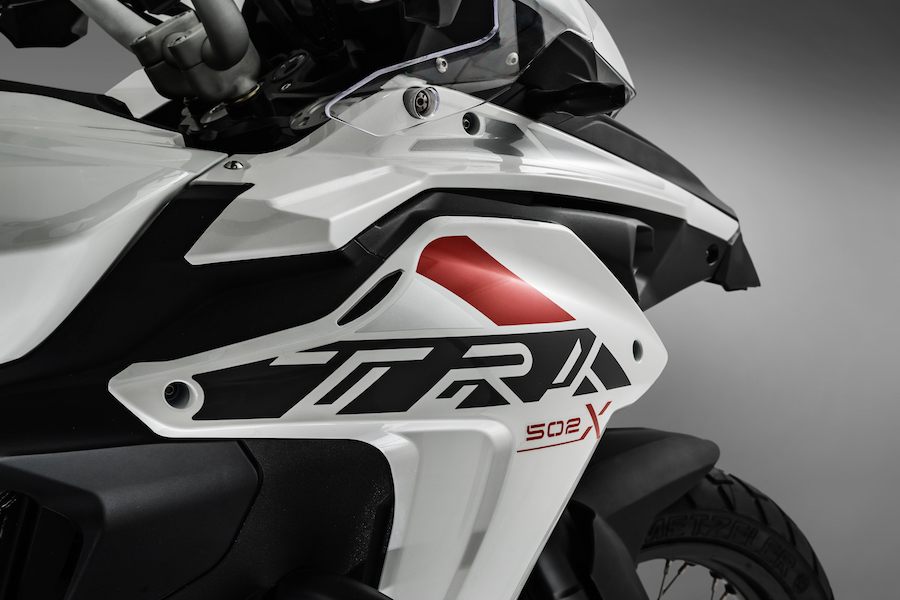 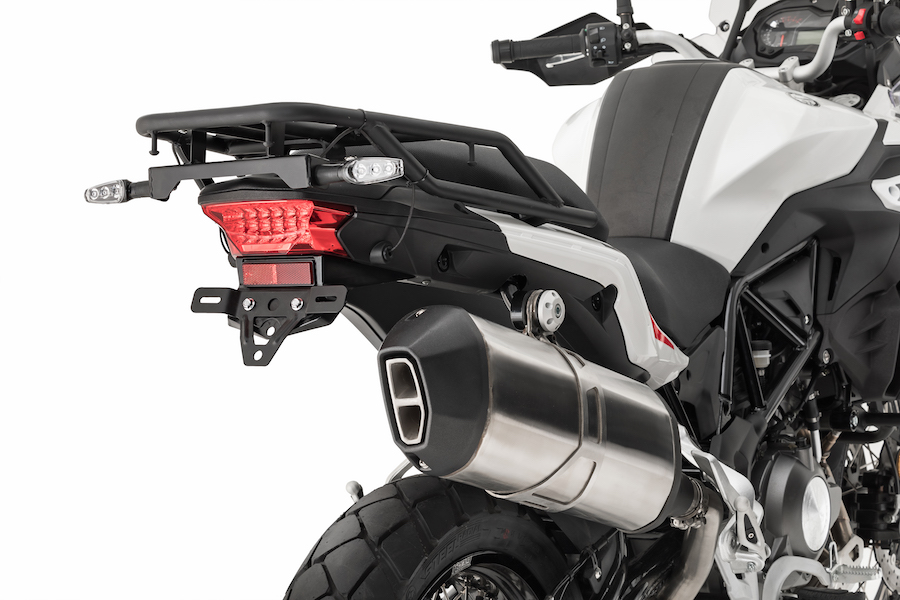 Benelli R&D chief Stefano Michelotti says the TRK 502 X differs mechanically only in having a new raised 2-into-1 exhaust system with longer header pipes and a redesigned silencer on the right-hand side of the bike, for extra ground clearance compared to the low-slung exhaust on the TRK 502, which exits under your right foot.

The X-model’s revised exhaust also produces a wider spread of torque, delivered with the help of a remapped Bosch ECU. This results in the same power output of 35kW (48hp) at 8500rpm, delivered with an even more linear and fluid build of power, while peak torque is now 1Nm less and chimes in 1000rpm earlier (45Nm at 5000rpm), with that broader spread for easier use off-road.

The engine has a 360° crank format with both pistons rising and falling together, like on a classic-era Norton or Triumph. “In determining the layout of our twin-cylinder family of engines, we first of all had to decide between a V-twin and a parallel-twin,” says Michelotti. “We chose a parallel-twin layout to share crossover technology with the BN 600 R in-line four we’d already developed. But then we had to decide what crankshaft format to use – 180, 270 or 360 degrees. We chose a 360° layout, giving greater flexibility and better lowdown performance, and a more individual sound.”

The resultant short, compact wet-sump engine design sees the liquid-cooled cylinders inclined forward by 20°, sitting on a robust-looking crankcase, with the six-speed transmission’s oil-bath clutch mounted tightly to it. The double overhead camshafts are chain-driven up the left side of the engine, with the paired 25mm inlet valves and 22mm exhausts set at a relatively flat 28.8° included angle. Compression ratio is 11.5:1, delivered via cast three-ring pistons and a shallow combustion chamber. 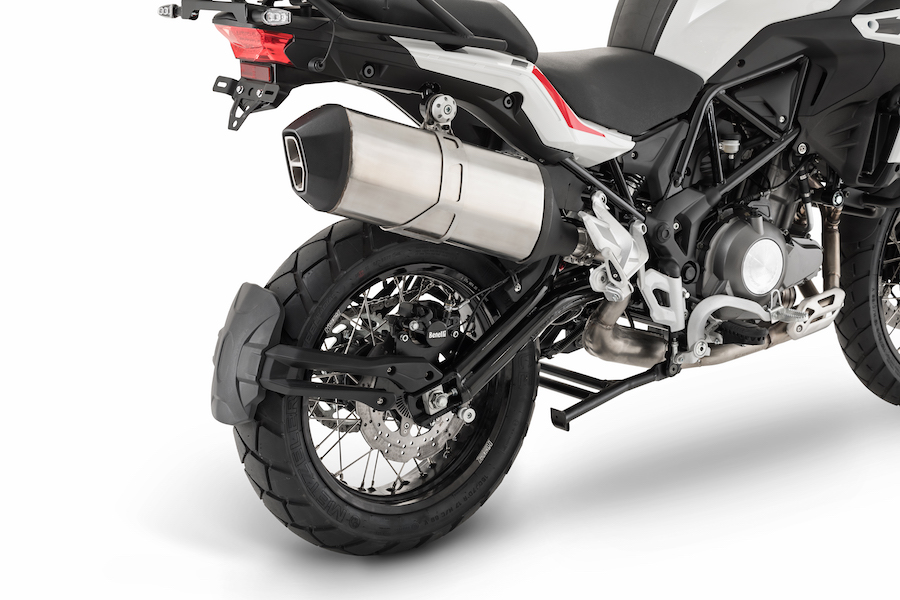 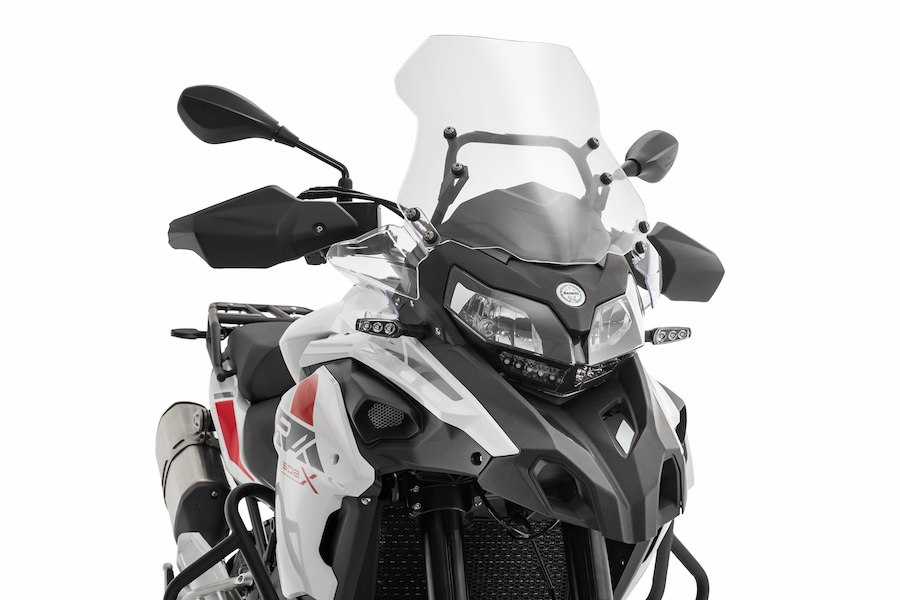 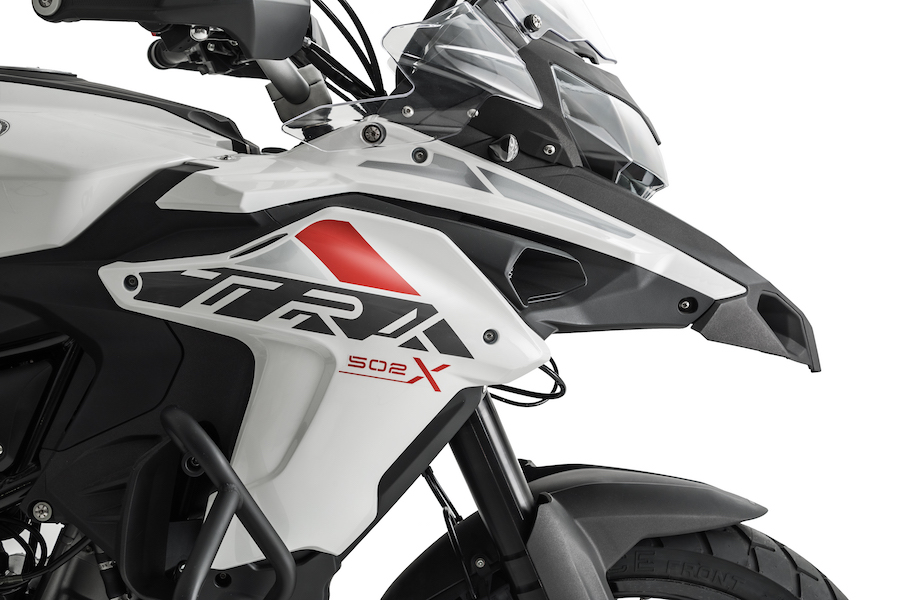 With a cable throttle rather than ride-by-wire, there’s no choice of riding modes, nor any other electronic rider aid beyond the Bosch ABS that’s required for Euro 4 compliance. Simple is best is the QJ mantra, which at such a low price point is surely acceptable.

Fitted with twin lambda probe oxygen sensors attached to the dual catalyst-equipped exhaust system to optimise the fuelling, and with a single injector for each of the twin 37mm throttle bodies made in-house, the Benelli’s parallel-twin motor (weighing 65kg without throttle bodies) carries a single counterbalancer positioned in front of the crankshaft, and gear-driven off it. 2. Half-litre parallel-twin engine is short and compact, with a wet sump and cylinders inclined forward.
It develops 35kW of power and 45Nm of torque.

3. Non-adjustable 50mm upside-down fork is similar to the road-biased TRK 502 but has 30mm more trail.

4. New 2-into-1 exhaust system with longer header pipes and redesigned silencer is mounted high up to improve ground clearance. The standard bike has a low-slung exhaust that exits under your right foot.