Suzuki has returned the full-powered SV650 to its line up for 2018 and fans of the middleweight V-twin are rejoicing. The tested Suzuki SV650X retails for $9490 (plus on-road costs), making it one of three sub-$10k bikes on this test.

There are two versions of the 645cc middleweight; the standard SV650 which retails for $8990 (+ORC) and this cafe-racer inspired SV650X. And the addition of a restricted LAMS-approved version of each expands the range to four models.

The standard SV650 and the X model are identical in terms of their chassis and engine with the differences between the two purely cosmetic. The X is fitted with lower-set clip-on handlebars, a small fairing around the circular headlight as well as a tuck-and-roll seat.

While the SV650X is void of any major electronics, it does boast Suzuki’s one-touch start which keeps the starter-motor spinning until the engine is running, and the firm’s Low RPM Assist which adjusts engine speed during take-off and low-speed manoeuvring to smooth clutch take-up and to help eliminate the possibility of stalling the engine.

There’s an enjoyable amount of low- and mid-range punch from the V-twin, coupled with a pleasing sound from the exhaust. It may be a little muted by the OE exhaust system, but once you give the throttle a decent twist, there’s quite a nice sound from around 4000rpm. 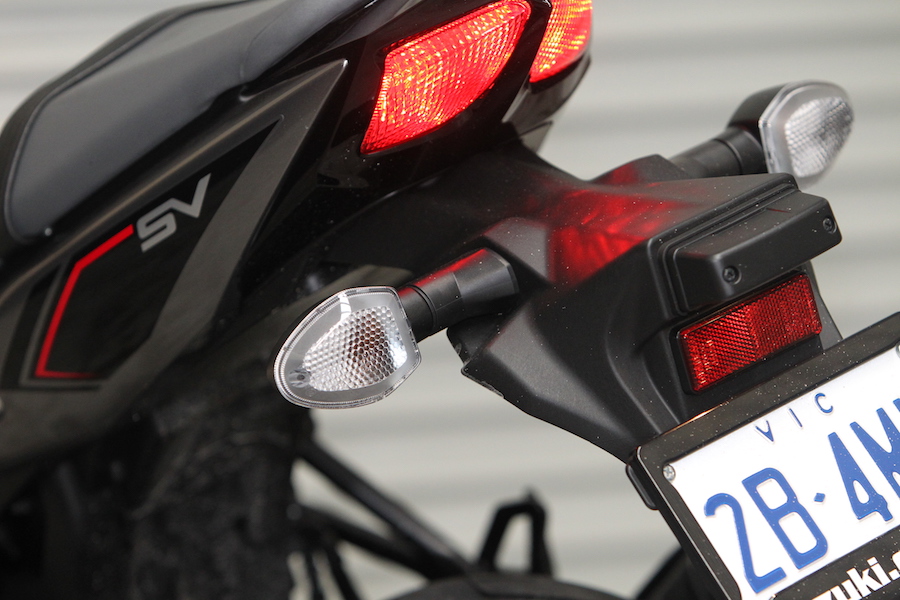 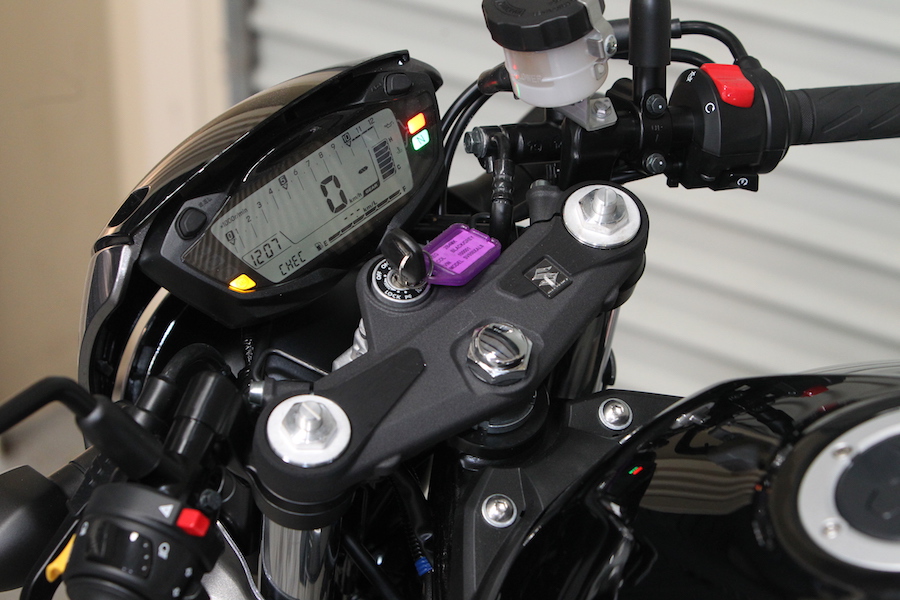 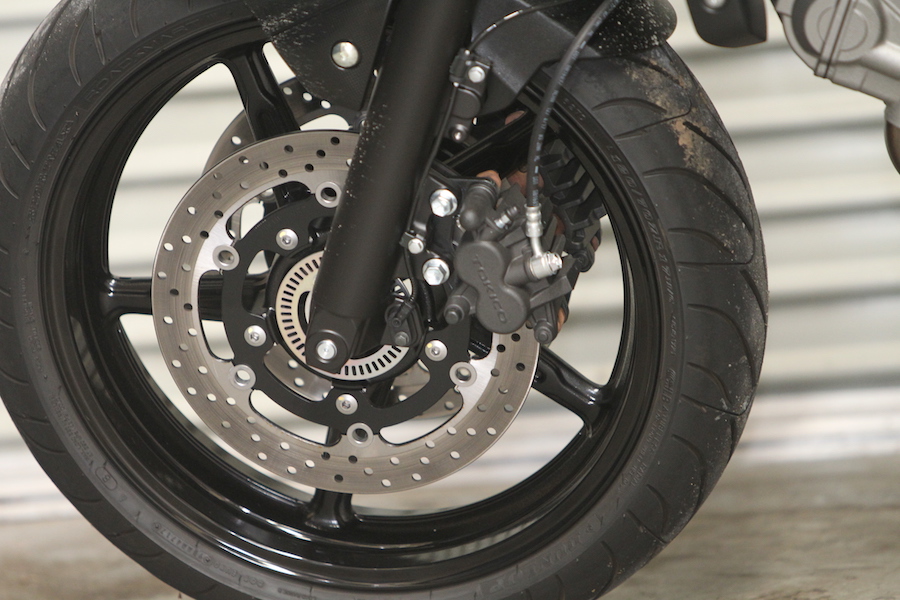 The ergonomics of the X-model differ from its standard-model sibling. The reach to clip-on bars is a longer stretch than the more conventional model’s and, while both machines have the same 785mm seat height, the rider’s ergonomic triangle is noticeably different. This is highlighted by the fact the seat is a decent step lower than the tank height, which means you sit well within the bike, rather than on top of it.

Aesthetically, the cafe-racer X-model has no trouble attracting attention, something the test team agreed on right from the get-go. 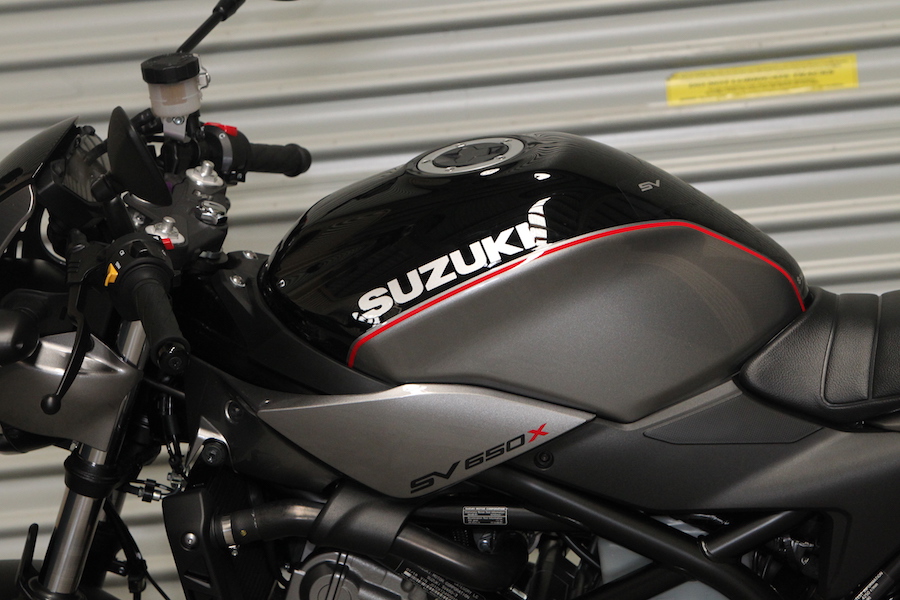 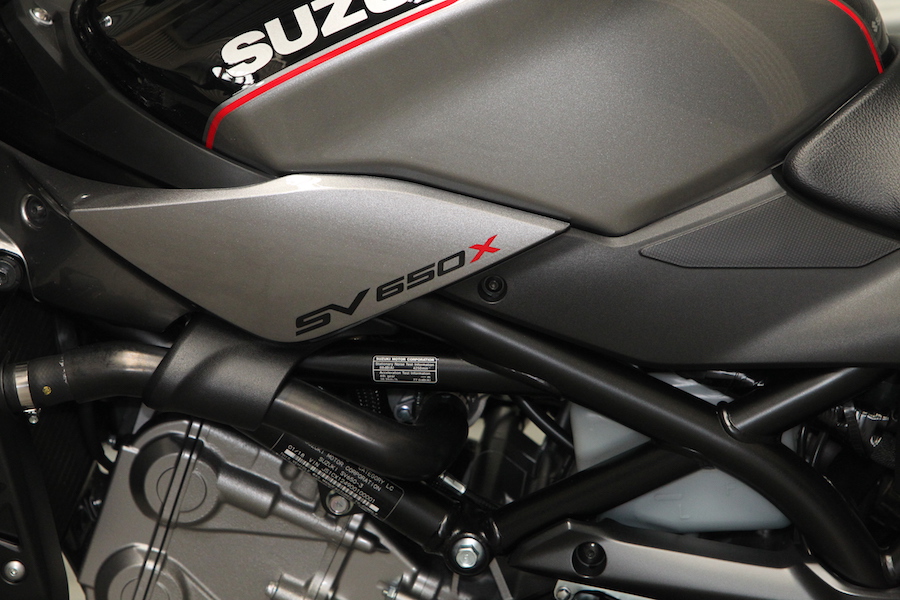 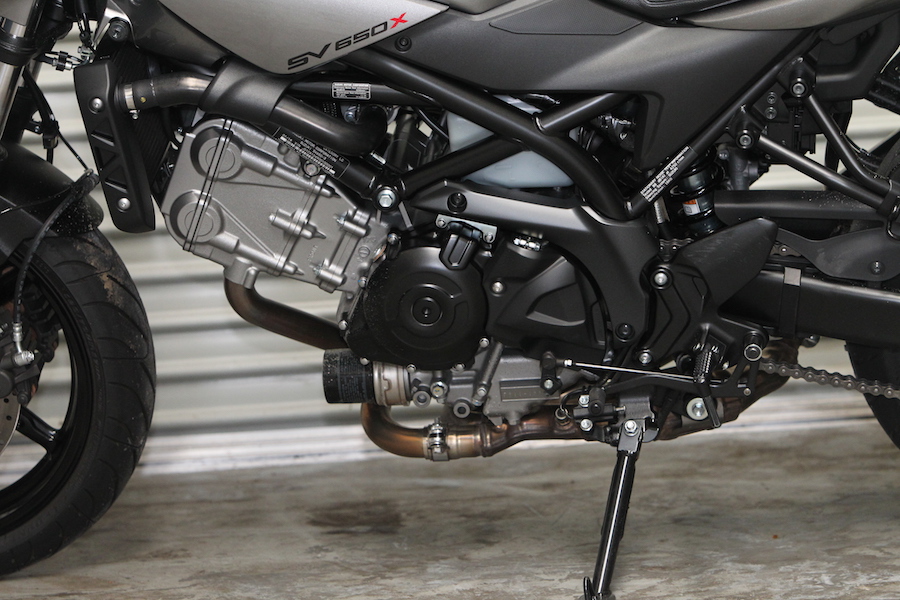 One of the strengths of the SV650 has always been its manoeuvrability in an urban environment, and its low-speed stability is still spot-on, assisted by a tight turning circle and the Low RPM Assist system. The clip-on bars make lane filtering a cinch, but while the large mirrors provide excellent rear vision, they do negate some of the advantage gained from the bike’s narrow profile. Owners may find themselves swapping the stem-mounted mirrors for a set of good-looking bar-end units. The riding position was also a concern for some. Riding it in long distances back-to-back with a more upright nakedbike, you start to feel the difference.

It was through the twists and turns of our test route is where the SV650X won a lot of fans, it’s an easy bike to ride quickly. The 41mm fork legs have preload adjusters which is a nice touch for the price. The suspension setup is on the soft side of the ledger for its intended use as a commuter, but there’s still a nice connected feeling with the road. THE SV650 IS a seriously cool motorcycle. It has style in spades, as well as being amazingly functional, torquey and just damn fun to ride. Less really is more with this little bike.

Nothing is left in the cupboard when you’re riding the greyhound-like Suzuki. Every last kilowatt of its proven V-twin is easily accessible, and its turn-in ability is beautifully deceptive. In an impromptu sprint with Gareth on the Triumph, the triple only pulled a small gap on the twin once things became lively.

Railing your favourite twisties, pottering down to the local cafe or a 400km day are all equally enjoyable, with neutral and predictable handling, as well as sensible brakes, which feel solid and have plenty of power.

As well as the high-quality nish, it’s the details – like functional mirrors, impressive fuel range, comfortable seat, surprisingly practical clip-ons and a wind-cheating bikini fairing that means you get a whole lot of bike for under 10 grand.

The suspension may be a little unsophisticated and the dash hard to read in re ected light, but that’s quickly forgotten underneath the induction
roar that would be nicely complemented by a satin-black megaphone pipe.

Like: Normally only having the choice of one colour would be a negative, but the Glass Sparkle Black and Metallic Grey of the SV650X means you can’t make a bad choice.

Dislike: The clip-on bars are narrow, and are excellent for lane filtering, but the stem- mounted mirrors negate the advantage. Bar-end mirrors would be a nice café-racer touch.