Without real justification some excellent bikes can seem invisible to buyers – the TDM is a perfect example.

Sam Maclachlan was on the money in a recent column (Vol 65 No 21) when he urged riders to stop using half-baked excuses for leaving their bikes at home. His message was basically ‘just do it’. One excuse he tackled was the old ‘not having the right tool for the job’ chestnut. Couldn’t agree more. Motorbikes are as versatile as you make them. Or not…

Taking nothing away from the excellent offerings in dedicated categories – adventure tourers, race-replica sportsbikes, or even comfortable, economical commuters – there’s a neglected bunch of bikes that cover all the bases pretty well. Let’s check out a much-ignored example: Team Blue’s unsung hero, the TDM900.

More than anything else it seems that its European styling – a non-aggressive smooth urban look – didn’t gel with Aussie buyers. Despite its somewhat genteel appearance its chassis and underpinnings are robust enough to do the business, be it on our mean city streets, the twisties in the hills, or the hard dirt and gravel yards in rural parts.

Compared with its TDM850 predecessor the TDM900 was a much revised and improved motorcycle. Its aluminium frame was lighter and stiffer. Its liquid-cooled parallel-twin engine – which incidentally is descended from the Paris-Dakar winning XTZ750 engine – was heavily revised internally, also copping a bigger bore. While its peak power of 63.4Kw at 7500rpm represented only a modest improvement over the 850, its max torque of 89.2Nm at 6000rpm was up by 11 per cent – importantly significantly stronger across the low to midrange area. As well a six-speed gearbox replaced the five-speeder and EFI replaced carbs. The engine retained its quirky 270º crank for that loping V-twin feel.

The ergonomics work well for a range of rider sizes on this comfortable, easy-to-ride bike. The upright position is ideal for commuting, while giving the rider great authority over the bike in all conditions. Surprisingly the TDM feels a bit like a supermoto when you’re getting stuck in.

The light clutch complements the accurate gearshift. While on/off throttle-response can be a bit jerky at low revs in log-jam traffic it becomes linear and predictable once you break free. The engine is remarkably vibration free from idle until well past the midrange and is very quiet mechanically.

The R1-derived brakes offer a great combination of power and feel.

The wheelbase, steering geometry, and perhaps the 18” front wheel (the rear is 17”) contribute to the bike’s stability in fast bitumen sweepers as well as on dirt. The downside is a slightly vague feel to the front end as you fling it into tight stuff – the long-travel suspension no doubt contributes as well. It’s a characteristic it shares with some other cross-category bikes, and you soon adapt to it. TDMs used regularly on rough roads will benefit from aftermarket spring and valving work to reduce suspension harshness and bottoming in those conditions.

They’re very easy on fuel unless you flog them. The 20 litre fuel tank is good for a safe highway touring-range of 380km or better.

Anyone rolling their eyes at the mention of a TDM either hasn’t ridden one or if they did, they didn’t get stuck into it enough to reveal its charms. I’ve seen a TDM more than holding its own in the mountains in close combat with a 955 Triumph Tiger and a TL1000-powered Cagiva Navigator, all at full noise.

For me the TDM900’s combination of versatility, rider-friendliness and fun-factor means that a TDM is a fine UJM –a true Universal Japanese Motorcycle. 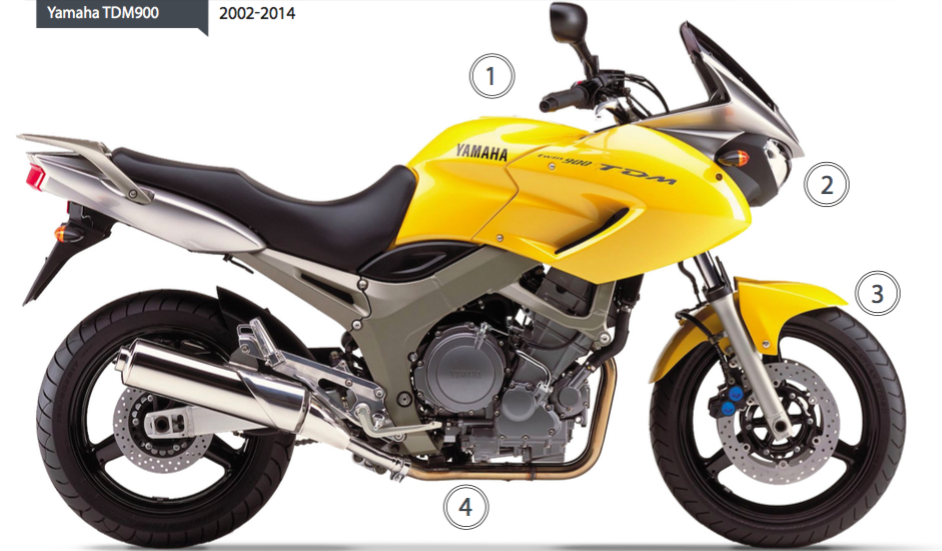 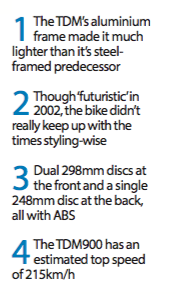 The Yamaha TDM900 is a well-engineered, trouble-free bike. Rough idling caused by faulty throttle-position sensors in some 2002-05 models should have been fixed during a recall at the time. Look for an example with moderate kilometres, a well-documented service record and no signs of neglect or abuse.

Always factor into your buying decision the cost of any steering-head bearings, chain, sprockets, brake pads and brake rotors that will soon need replacing. The TDM900 is a generally straightforward bike to work on. Major components are reasonably accessible. DIY-owners can readily tackle routine servicing like oil/filter changes.

Work on its electronic fuel-injection system is best left to technicians with the required specialist equipment. This could also apply to shim-type valve adjustments.