Grudges. We all hold them. And while I had one of my most pleasurable rides on a BMW F 800 ST 13 years ago, it seriously lacked any kind of personality.

Some motorcycles are hugely capable but lack any emotion or sparkle, like that nerdy kid who ate lunch in the library. And other motorcycles light a fire within you, but when it comes to having to live with it every day, then it’s probably better it stays put as a poster stuck on your shed wall.

BMW’s F 800 range – the early ones anyway – were that bookish kid. Fast and capable when pushed – I rode one on the run from Queenstown to Strahan on Tassie’s west coast back in 2006 and it’s still up there in my top five most memorable rides. But I didn’t want to not give it back, and when I did, I bet I didn’t even turn and give it one last look. 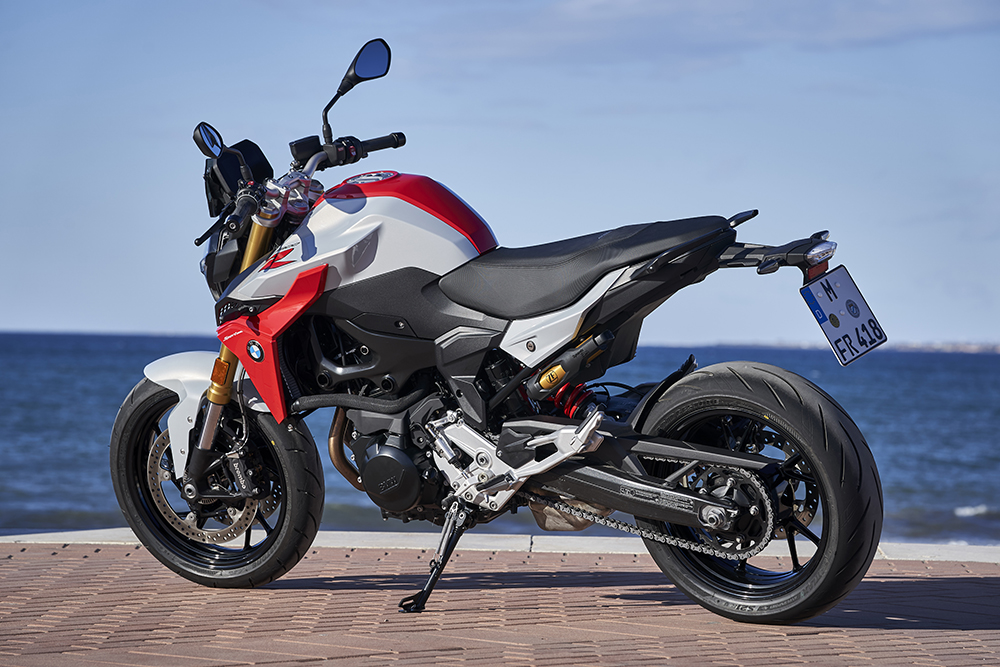 But now I’m winding on the power on the exit of a third-gear corner, chasing the BMW lead rider across a tight and twisty mountain pass, and the all-new F 900 R’s strong midrange is slingshotting me out of the grippy turns. I can feel everything that’s happening underneath me, the deep and almost too-loud exhaust is egging me on over my right shoulder and I’m having a ball.

Though not a conservative but capable kind of ball, rather a confident, go-for-broke kind of ball. It’s like BMW has let the F 800’s hair down. So as well as all of the quality running gear that give most modern-day BMWs that pretentious European accent, the firm has achieved it by taking the 853cc motor out of the F 850 GS and increased the capacity to 895cc. Then, like a lot of the most successful parallel-twins currently available, has given it a 270-degree firing order in a bid to mimic both the sound and characteristics of a big V-twin. 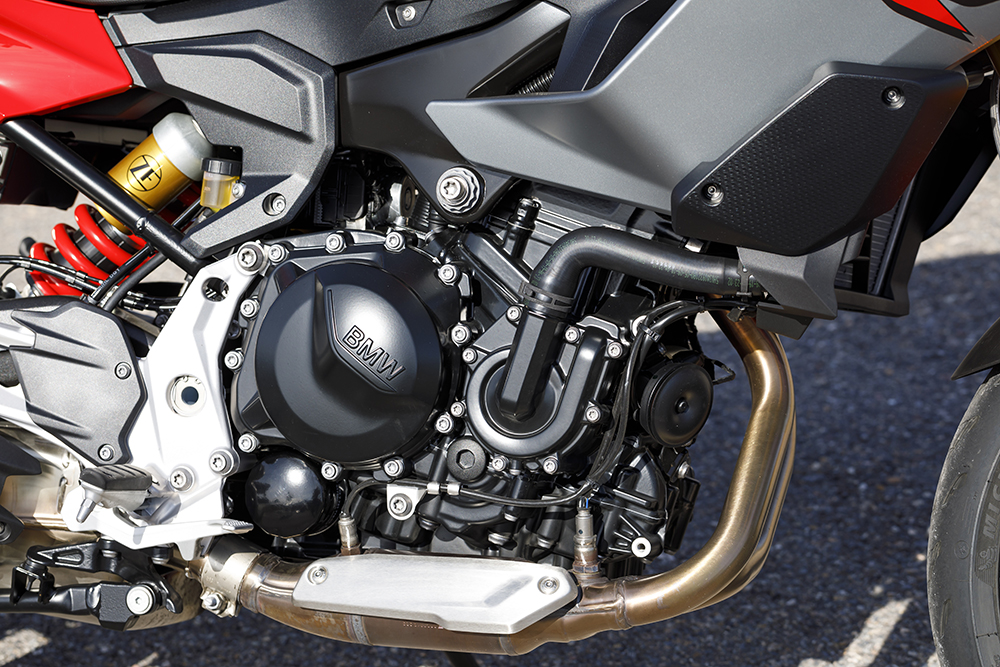 And by doing this, BMW has taken a once rather agricultural but able engine and turned it into something you just want to get on and ride. Helped no doubt by the optional Riding Modes Pro plug-in fitted to our test bikes which unlocks a third Dynamic riding mode on top of the standard-issue Road and Rain modes. Between the responsive acceleration, the also-optional Dynamic ESA activated to suit the perfectly smooth Spanish roads, it’s some of the best riding ‘flow’ I’ve felt in a long time.

It’s not so much the level of performance on offer, 77kW (105hp) of power and 92Nm of torque is hardly worthy of bragging about at the bar, but it’s the way it delivers the goods which is such a stark difference from the model/s which proceeded it. Ten more kilowatts than the 800 and 500rpm later, and six more newton metres – the same torque figure as the 853cc F 850 GS, actually, 850rpm later than the 800 and 250rpm later than the 850 GS.

The road became narrow, bumpy and deteriorated to the point where the surface in some sections broke up to gravel. A push of a button on a pretty crowded left switchgear returned the rear damping to Road mode,
which by no means made the rear end soft or spongey, instead just reduced the severity of the road surface by lengthening the stroke in its automated adjustment. 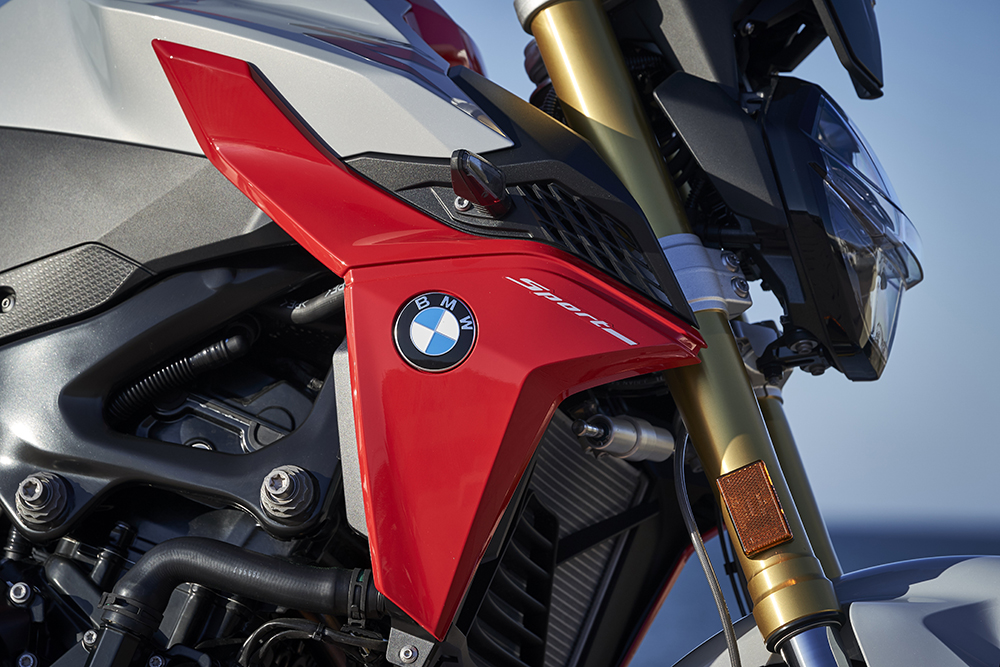 The optional Dynamic ESA is only applied to the rear shock; the front suspension is a non-adjustable 43mm fork which is far more proficient in practice than its non-adjustable no-name-ness implies. The feedback via the Bridgestone Battlax S21 is excellent and confidence inspiring and, even on the shitty surface, holds a line beautifully once you’ve committed to a corner.

That feedback is more obvious on the fully naked R model than on the more practical F 900 XR I rode the following day. More or less identical machinery save for the fairing and screen combination, tank capacity and ergonomics, the XR’s longer-stroke fork and Michelin Road 2CT tyre still offer decent feedback, but just not to the precise level of the naked version. 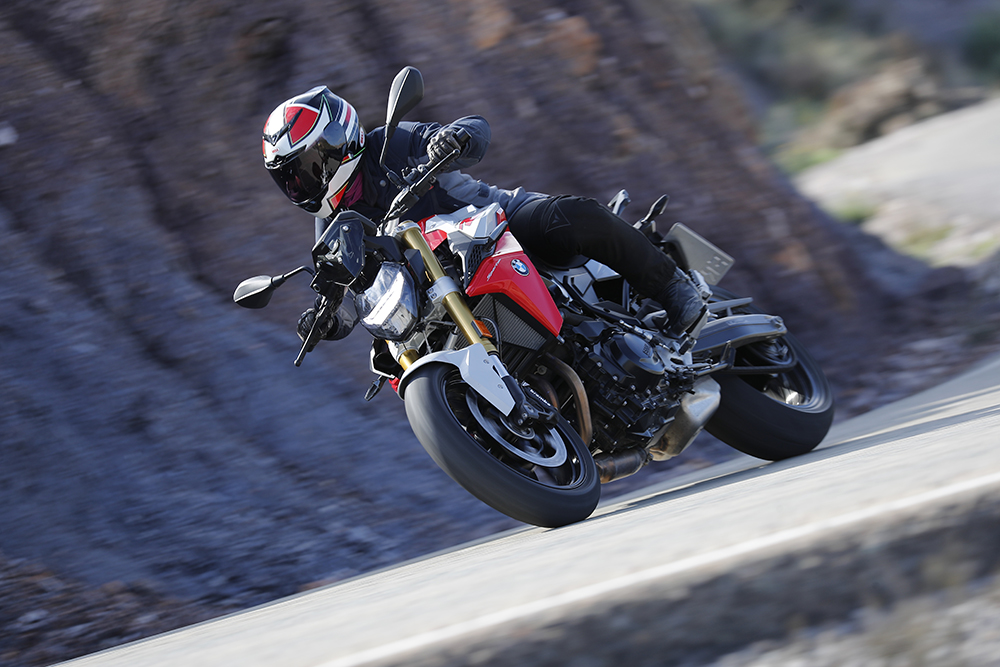 The extra weight dulled down the responsiveness of the XR compared to the almost 10kg-lighter R, too, but it’s only jumping between the two when it would be either noticeable or seen as a potential downside. Besides, I really don’t think they’re talking to the same buyer, despite their similarities.

The R, with its shorter seat, more aggressive riding style and sporty capabilities, is talking to your nakedbike purist. The rider who can see past the bland and built-to-a-price F 800 series and can now spot a well-equipped, modern motorcycle that frankly, would get from one end of a squirrely mountain pass quicker and more easily than a 10-year-old 1000cc inline four-cylinder Supernaked. 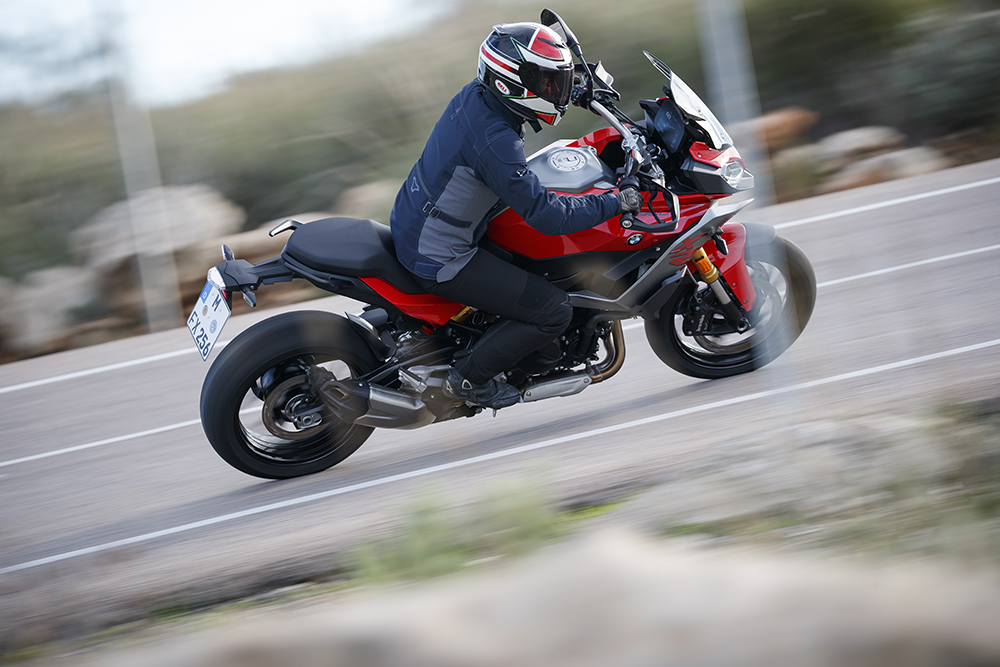 The XR, on the other hand, has a higher seat, a 3mm longer wheelbase, 9mm more trail and a far more relaxed riding position. Its slightly more plush suspension and really effective two-way (manually) adjustable screen has it talking to the practical rider who wants to munch miles on a bike with a bit more sophistication than, say, Yamaha’s MT-09 Tracer. It’s wider, higher ’bar make steering feel slightly more intuitive, albeit slightly slower to change direction than the R model, thanks to both the bike’s geometry and
the rider’s ergonomics. 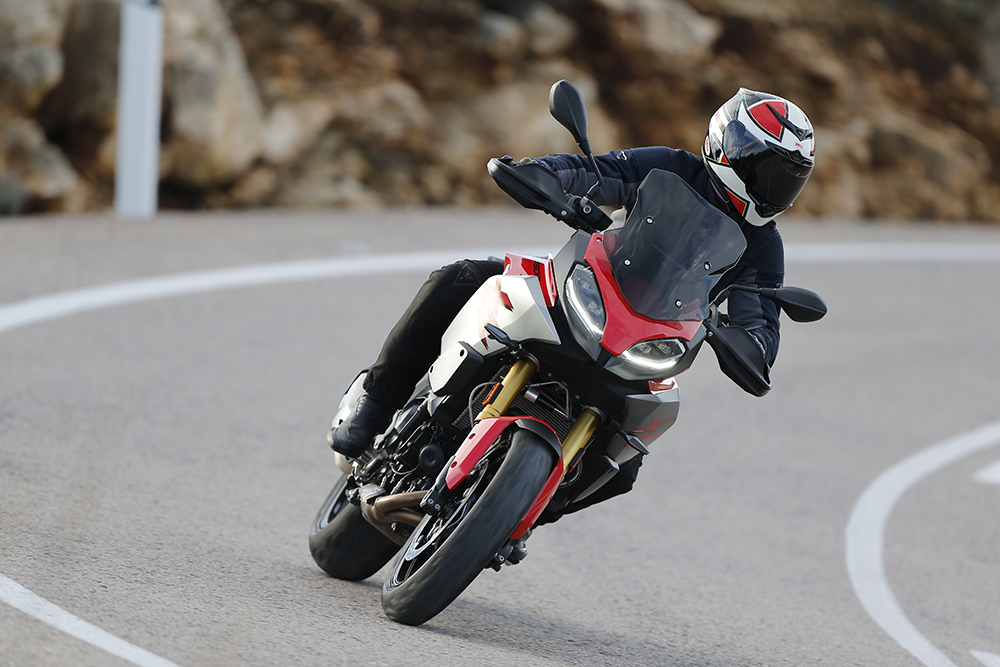 In fact I reckon the firm’s new S 1000 XR (I rode the new version of that, too, see a full test of that coming up in an upcoming issue) has the potential to take more sales away from the 900 XR than the 900 R does. Though while Aussie prices and specifications of all three new models were yet to be confirmed as this issue went to print, there should be two factors to consider the 900 parallel-twin over the inline four-cylinder litre bike.

First will be the price; actually value-for-money is a better term, because the 900 XR should be considerably less expensive than the litre bike. But more importantly when a would-be owner experiences the usability of the new 900cc parallel twin and how perfectly suited is to everyday mile munching in its most recent state of tune, then the only thing that’s going to convince would-be 1000 XR owners is their ego. And I mean that in the nicest possible way.

There’s still a lot of the same gadgetry common to both. Where once the F 800 series was a bit anaemic in terms of its level of kit (or stuff that owners list in that pretentious accent I referred to earlier) fitted as standard. Both F models employ the same 6.5-inch full-colour TFT dash you’ll find on all top-spec, high-capacity BMW bikes including the actuating dial inside the left grip which you either spin, push down or push across to navigate your way through the amazingly complex on-board computer. 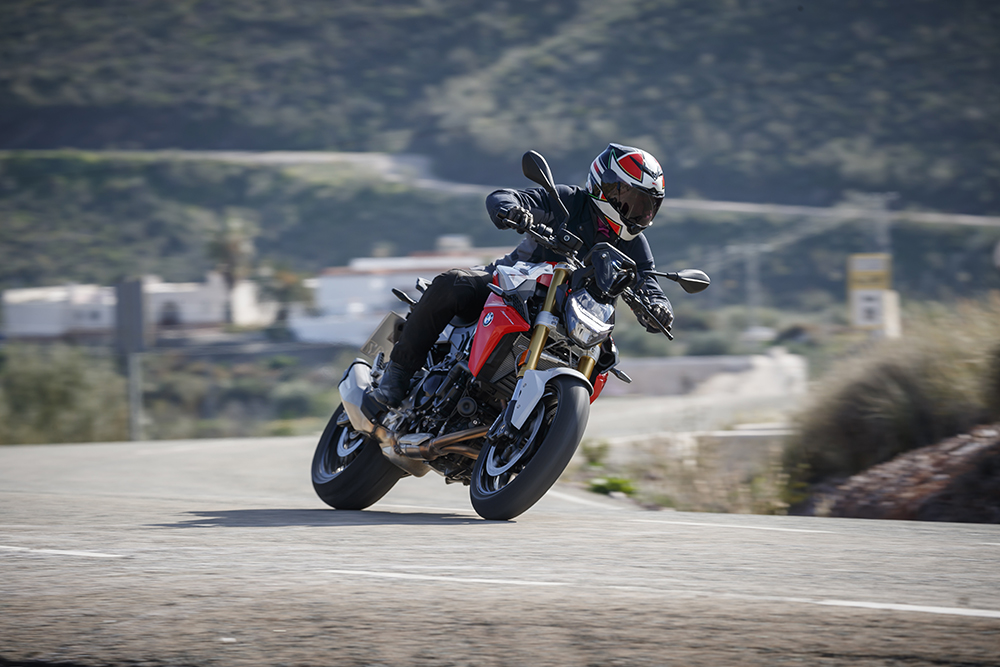 Amazing in just how much information and customisation is on offer – both bikes had all the options fitted and without yet understanding what spec BMW Australia has in mind for you and I, it’d be fruitless to run through all of the features. However the coolest fruit was the lean-angle sensors, which gives you your average and maximum lean angles from the last ride and the completely adjustable throttle response within each mode.

It goes without saying that the whole kit and caboodle is compatible with your smartphone. I must admit it’s a function I rarely test; phone connectivity isn’t really my bag when it comes to motorcycles, but there’s no doubt in my mind that the BMW system would be both intuitive and effective. And I can report that it works, ’cos I overheard some very enthusiastic South American journos comparing their lean-angle abilities via the information uploaded to their phones one evening at the bar. 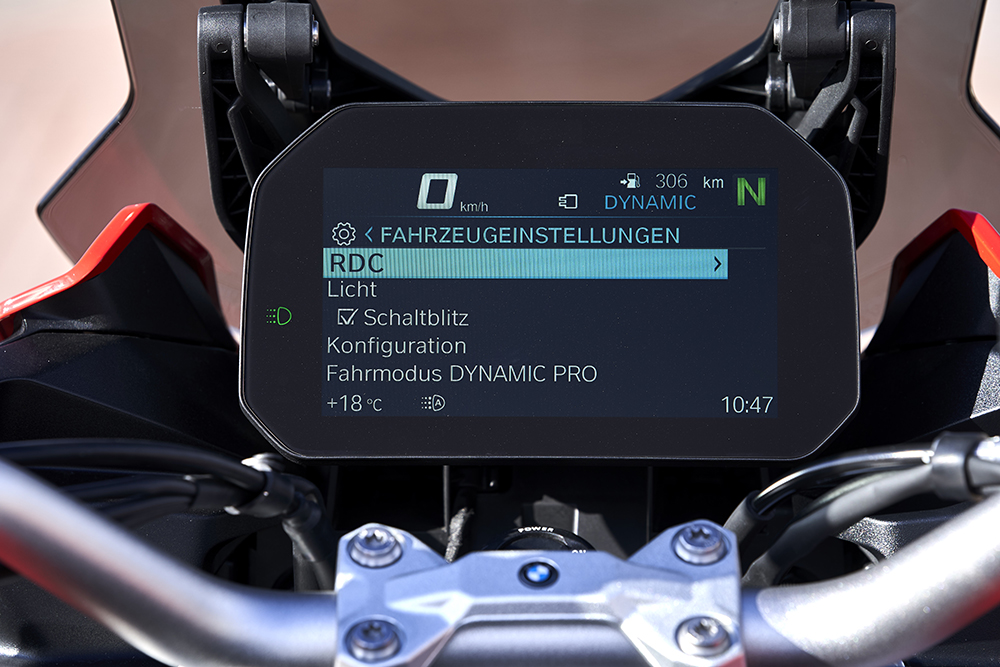 The other impressive feature in the firm’s mid-size line-up is the adaptive headlights. Using a sensor mounted in the tail of the bike, the LED headlight illuminates depending on your lean angle, and projects light towards the centre of the road as you turn, rather than the tree canopy above. Okay, not as impressive or as fun to brag about at the bar, but arguably more useful and functional. The same can be said for the intelligent emergency call function, a big red button on the right handlebar which you pre-program to ring emergency services on your behalf and which it will very kindly advise the receiver of your location.

The other thoroughly practical ‘must-have fitted as standard’ feature is the multidirectional quickshifter. I’m yet to use a bad one out of the German factory so I expected this to be as good as it is. The revs might have needed to be slightly higher than I expected to achieve that ultra-slick change, but I’m being picky, the thing’s great. 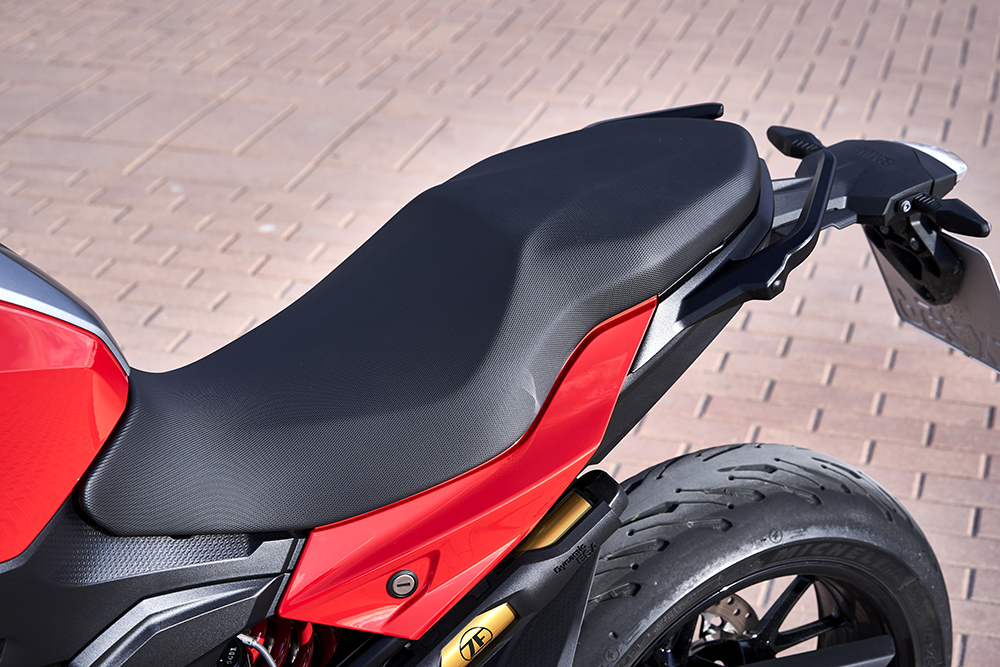 You might recall the previous F series employed an under-seat fuel tank in a bid to lower the bike’s centre of gravity. More important probably on the platform’s GS models (hello KTM’s so-called innovative side-mounted tanks) than on the road-going machines, both F 900 models do away with that for 2020 and opt for a conventional tank.

Conventional by packaging maybe, but BMW says its plastic-welded construction is a first for any production motorcycle, BMW or otherwise. It came down to weight, with the firm claiming a 60 percent lighter tank than in the model it replaces, which mounted down low or in the classic spot, is going to improve the agility of the machine regardless. The F 900 XR gets a capacity of 15.5 litres, while the F 900 R’s tank holds just 13 litres. 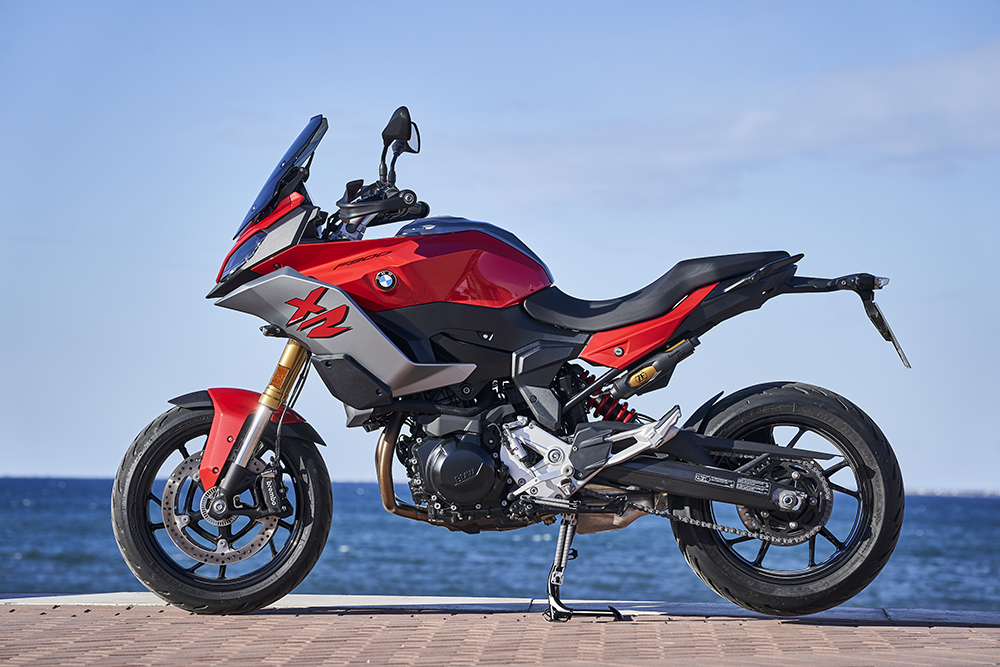 The brakes are excellent, again as you’d expect from such a high-quality pair of bikes. Brembo Monoblocs front and rear, with two four-piston calipers gripping twin 320mm discs up front, while a twin-piston caliper bites a 265mm rear disc. The initial bite is better suited to the heavier XR, at times I found the first grab a little too bitey on the lighter naked, especially if my jetlag made me momentarily forget which side of the road I was meant to be on and I grabbed a handful approaching a really confusing roundabout.

But their power once actuated is predictably fierce. And especially fiercer than most if you were the South Americans at the bar that night, because under the Sport menu (which unlocks with the Dynamic plug-in), as well as a maximum lean-angle reading, you also get your maximum braking pressure beamed to your phone. 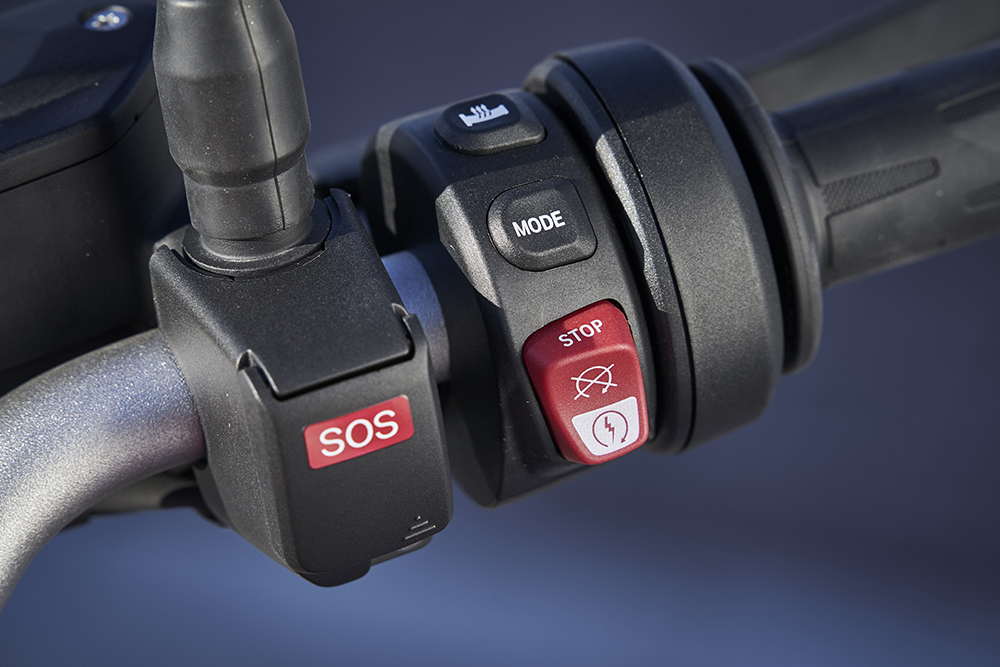 The bodywork is the most visible and obvious difference between the pair. The wide fairing, hand guards and two-way adjustable screen offers excellent wind protection. They reduce fatigue and let you cover more kays.

The ergonomics are different, too. The R’s footpegs are 15mm higher and 5mm further back than the XR’s, while the handlebars are 25mm further forward and lower than on the long-legged tourer.

The XR pays more attention to the pillion. The rear seat uses 7mm thicker foam, freeing up legroom to the pillion ’pegs, which are 45mm lower and 25 mm further forward. The standard rider seat height of the R is 815mm, the XR is 825mm.

Suspension travel is longer on the F 900 XR compared to the sportier F 900 R. The non-adjustable 43mm upside-down fork offers 170mm of travel on the XR compared to 135mm on the R. The rear is 172mm and 142mm, respectively. 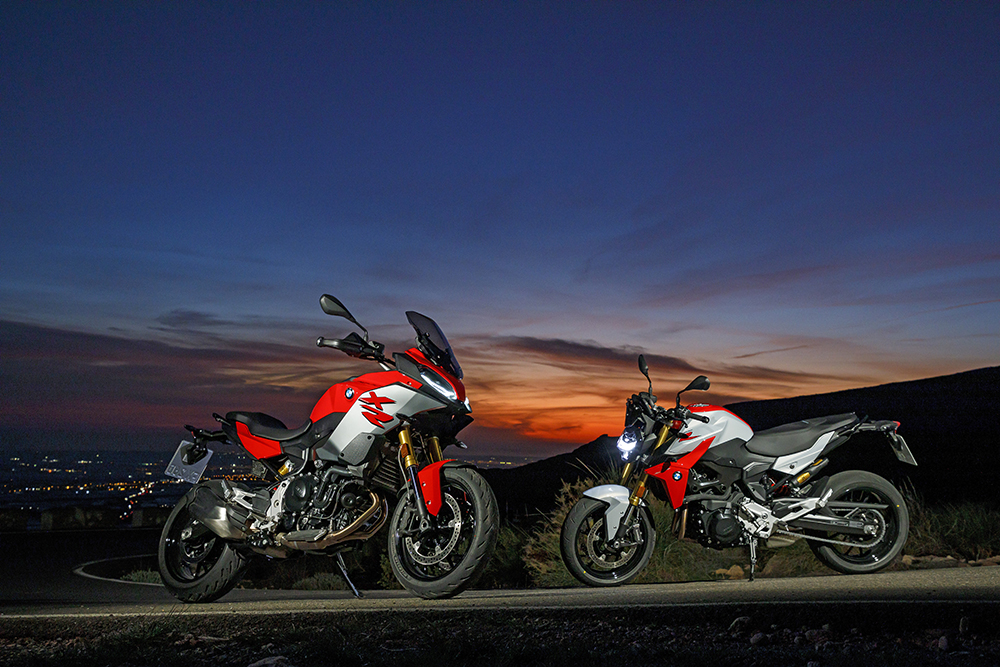