Kel Carruthers won his only world championship at a tipping point of Grand Prix racing. The 250cc grid during 1969 was a fabulous mix of different bikes and riders.

The riders came from all over: Carruthers from Australia, Kent Andersson from Sweden, Santi Herrero from Spain, Renzo Pasolini from Italy, Heinz Rosner from East Germany, and Rod Gould from Britain.

Kel Carruthers’ 1969 250cc championship was the category’s last by a four-stroke, because from 1970 the class was limited to twin-cylinder machines, a cost-saving rule that initiated a four-decade reign by 250cc two-strokes. It was also the first and last 250 title won by an Australian.

Kel Carruthers had planned a three-way campaign in 1969, riding factory Aermacchis in the 125, 350 and 500 classes. The 250 championship wasn’t even on his agenda. And it was four races into the 12-race season – at the Isle of Man TT – before he even climbed aboard a 250.

“Halfway through practice week, Count Nardi Dei from Benelli asked me if I’d be interested in riding their spare 250,” Carruthers recalls. “They wanted me to run second to Pasolini and help him win the championship.”

Pasolini needed all the help he could get because he had failed to score in the first three rounds.

“I took off in the 250 race and found myself in the lead,” adds Carruthers. “So I slowed down, waiting for Pasolini to catch me. Eventually Benelli gave me a pit board, saying: ‘First, OK’. After that they offered me a contract to back up Pasolini. The only trouble was that was I usually faster than him. “It got a bit embarrassing because the wrong guy was getting all the points! When Pasolini crashed at Imatra, Benelli figured out that I could win the championship, so for the last three races I got two bikes and all the help I needed. I got the title at the last race at Opatija.”

Even now, the biggest thrill of Carruthers’ career was not his only world title but his first TT victory, because back then that’s all that mattered to Aussie youngsters who grew up reading the British motorcycle papers, shipped out to the colonies each week.

“I had wanted to do the Isle of Man from the time I was a little kid. The TT was the thing for most decent Aussie riders.”

Kel Carruthers grew up in Granville on the western outskirts of Sydney, where he worked in a motorcycle shop owned by his father, a top sidecar speedway rider. He fettled bikes and got his street licence when he was just 15.

“My dad had a contract to fix bikes for the army, so he wangled me a street licence so I could road-test bikes. And to get a competition licence you had to have a street licence, so I went racing at 15.”

Kel Carruthers started racing a BSA Bantam on the dirt, won his first serious road race at Bathurst on a BSA B31, and was soon dominating the Australian road-racing scene. He was very fast, but just as important were his engineering skills.

“I built all my own stuff, so my bikes were all bitzas – BSA engines with Manx Norton gearboxes and so on. It was the way I was; I’d learned it all from my dad.”

Between 1961 and 1965, Carruthers contested 181 races in Australia and won 148 of them. He was only beaten by GP winners Tom Phillis and Jack Ahearn, when they came home for the off-season.

It was obvious what Carruthers should do next. But, unlike most ambitious Aussies heading to Europe, he wasn’t young, free and single. 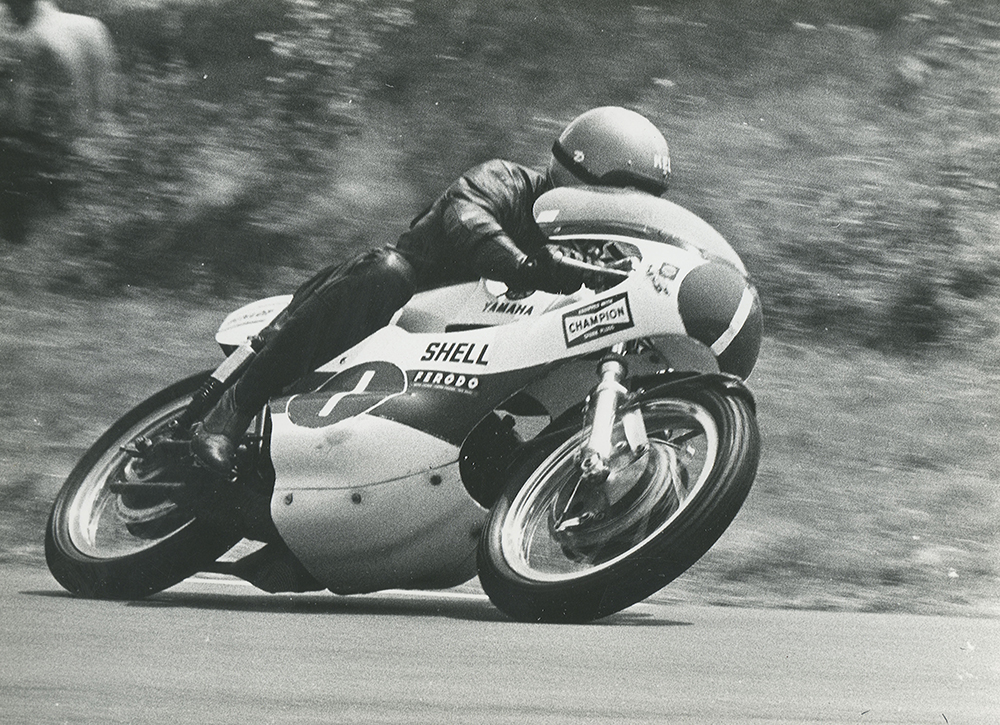 Kel Carruthers joined the Continental Circus at the age of 28, with wife Jan, two kids and his parents, trekking around Europe with a Honda 125 twin and 350 and 500 Manx Nortons. The gypsy lifestyle may have had a certain romance, but this was a tough, deadly game, competing on street circuits and always on the road, racing every weekend to keep the cashflow going.

“The first year was really hard. The racing side was pretty easy, because that was just riding bikes. The real work was negotiating with the organisers, plus all the carnets you needed to check in and out of all the countries, plus finding our way around.

“We didn’t have a lot of money, but we had enough to have one of the first Ford Transits and a little caravan. I was having the time of my life, but it was hard on Jan, living in a little caravan, looking after the kids and travelling all the time. It was hard for all the women in the paddock.”

Carruthers’ engineering instincts took over for 1967, after he ordered a 350 Aermacchi.

“I went to Varese to get the bike, but only the engine was ready, so I bought a Rickman frame and got all the good stuff from Italy – Ceriani forks, Fontana brakes – to build my own bike.”

In 1969 Carruthers became a factory Aermacchi rider, with a 125, 350 and 380, for the 500 class. He was lucky Benelli came knocking because the Italian singles were outgunned by the four-stroke multis and burgeoning two-strokes.

Benelli’s 16-valve DOHC four made 64hp at 14,500rpm and had eight speeds. Ossa’s two-stroke single was a very different motorcycle – only 42hp at 11,000rpm but much lighter and more manoeuvrable. The MZ and Yamaha twins were in between, with 56 and 45hp respectively.

Going into the final race in Yugoslavia, Carruthers was in a three-way title fight with Herrero and Andersson. He won the race, Andersson was third and Herrero crashed out. Benelli planned to defend its title in 1970, but problems at the factory left Carruthers without a ride. His only option was to buy a TD2 and a TR2 350, but demand for these game-changing machines outstripped supply. He was lucky to find two bikes in the US, through Gould and racer/tuner Don Vesco. This was the start of a 20-year career with Yamaha. Carruthers could have retained the 250 title in 1970, but the TD2’s contact-breakers kept failing, usually when he was in the lead.

“At the end of 1970 Jan and I decided we’d done this long enough – we were going home to Australia. Then Don Vesco said, ‘Hey, if you want to race in America for a year, you can use my shop and my dyno,’ so we went to America, thinking we’d stay one year.”

The family has been based in California ever since.

The work Carruthers did over the next few years helped change racing forever. At first he raced as a privateer, but his results were so good that Yamaha US asked him to run its racing operation, as rider/manager.

Soon Yamaha Japan noticed his engineering abilities, so he played a huge part in the development of the factory’s 250, 350 and 750 racebikes, which dominated racing across the globe for years. But it wasn’t only bikes he had to develop.

“Part of my deal with Yamaha was to look after Kenny Roberts, who was just a young kid, still racing dirt track. It was pretty obvious that Kenny was going to be pretty good. I could beat him the first year, then he got better and better.”

Kel Carruthers quit racing to concentrate on engineering and management. Then, in 1978, Yamaha US sent Roberts to Europe.

“Initially Kenny wasn’t all that keen on going, but in the end he had no alternative because Yamaha’s dirt-trackers weren’t good enough. I talked it over with Jan and we thought we’d do it for a year or two. The good thing was that we were able to do it the right way – Kenny and I sent motorhomes to Europe, so it was more comfortable than it had been in the privateer days.”

Roberts took a 250, a 500 and a 750 to Europe, to contest all three championships. “If Kenny had stuck with 250 he could’ve won that as well, but halfway through season he decided to focus on the 500. And he could’ve won the F750 championship too, but there were too many conflicting dates. 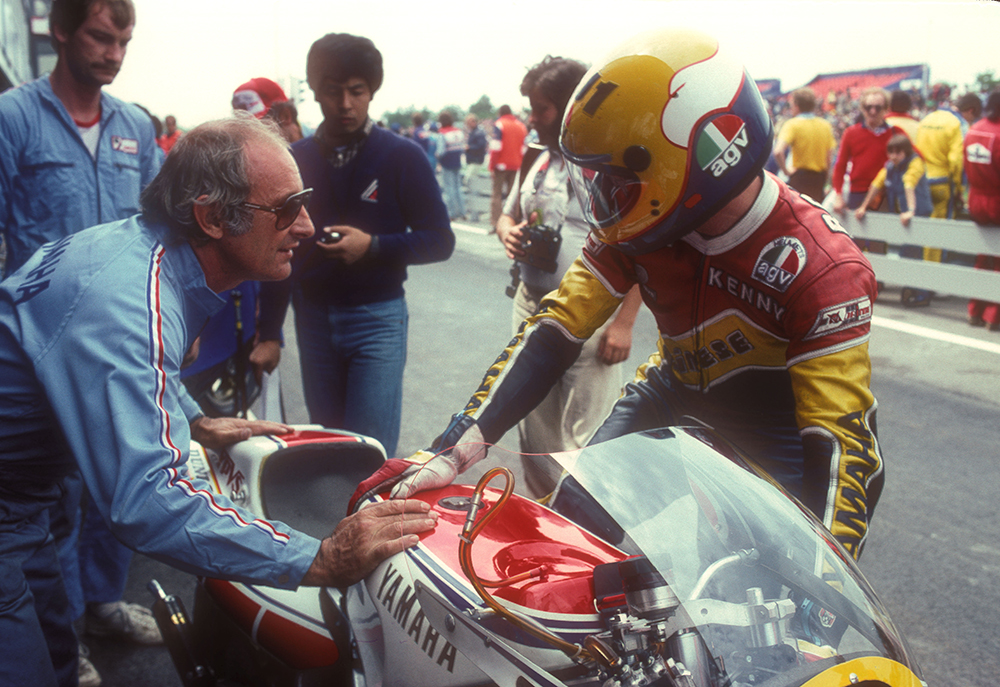 “That year, Kenny more of less did whatever Jan and I said. The first year, the people from the Isle of Man wanted him to do the TT. They were going to pay him a lot of money, so we sat him down and said, ‘This is not a good idea; they’re going to expect you to go over and win the damn thing and you’re not going to, because someone you’ve never heard of will beat you.’ He took notice of what we knew was best for him.”

“The good thing about Kenny was that he’d bitch a lot about the bikes, but when I told him, ‘Hey, Kenny, this is the best we can do, now it’s up to you,’ he’d give it
100 per cent every time.”

Roberts lost the title in 1981 and 1982, when Yamaha produced a useless square four and V4. “They were the bad bike years.”

The 1983 season was one of the all-time great battles, with Roberts on the 0W70 and Freddie Spencer on Honda’s NS500. Spencer won the title with a controversial move at the penultimate corner of the penultimate race. It enraged Roberts, but Carruthers believes it was Roberts’ fault.

“It wasn’t so much what Freddie did at that corner, it was the mistake Kenny made at the corner going onto the back straight. If he had done that corner right, Freddie wouldn’t have been on his tail at the end of the straight and Kenny would’ve won the championship.”

When Roberts retired at the end of 1983, Carruthers was put in charge of Yamaha’s latest American hotshot, Eddie Lawson. They won the 1984, ’86 and ’88 500cc world titles. “Eddie was a very, very good rider on a good bike, but I don’t think he was as good as Kenny on a bad bike.”

After Yamaha, Carruthers worked on Honda’s NSR250 and Cagiva’s 500. Finally, he returned to the US, where he tuned Sea-Doo watercraft racers and managed Superbike and motocross teams.

He is one of only four bike racers in the Sport Australia Hall of Fame, along with Wayne Gardner, Mick Doohan and Casey Stoner – a suitable tribute to a hugely significant career. 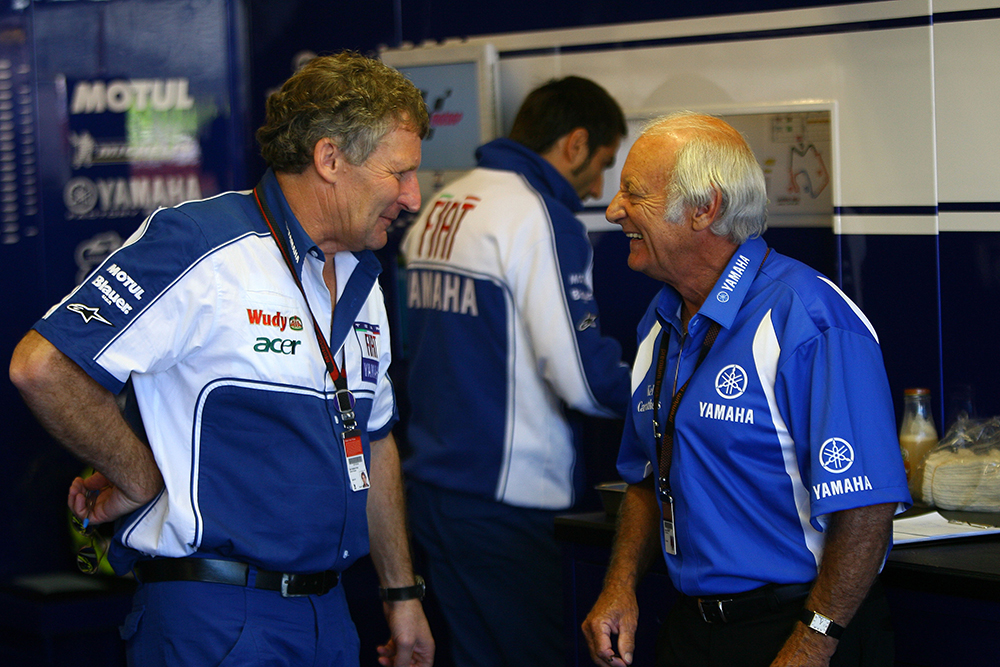