Inazuma means lightning in Japanese. But it’s a little more complex than that. It’s also the first name of a legendary sumo wrestler from the 19th century, a Japanese battleship and a famous 1950s Japanese film about the search for personal happiness. No coincidence, then, that Suzuki also attached the name to a bike like this. It’s a fast, powerful fighter that’s put a smile on more than a few dials, so the name seems perfectly suited to both the factory bike and this little reworking of a ’00 Suzuki GSX1200 Inazuma by Polish company Ugly Motors.

Ugly Motors is run by 31-year-old builder and IT specialist Jakub Beker, who has clearly found his passion in real steel 70s and 80s motorcycles. Currently occupying a first-floor workshop that requires him to use a homemade crane to get bikes in and out, he’s planning to move to the ground floor and invest in some new equipment. “For future projects, I’d like to try some metal shaping. That’s why I’ve recently invested in an English wheel,” he says. The donor bike was found nearby in a small Polish village. A friend of Jakub’s brother, who has managed to ride dozens of bikes during his motorcycle career, sourced it.

“I’m in love with the old 60s and 70s racebikes, but I knew their prices were crazy and just how precious the real bikes are. So I said, ‘Let’s build a classic bike based on modern technology.’ That was the vision.

“I knew the donor bike had to have a huge powerplant. There were only a few models based on classic frames with huge engines: Honda’s big CB1100, the mighty Yamaha XJR1200 and 1300, and Suzuki’s GSX1200 and 1400. All these are very good bikes, but as soon as I saw the Inazuma tank, I knew that this was the one I wanted.”

Jakub started the build by mounting the front end, brakes and rim from a GSX-R1000 K4. Next, he came across some RME triple clamps and mounted them with custom parts made by his local lathe magician.

“I’ve tested the set-up and it’s changed everything from the stock bike. My average speed increased drastically. But when I caught a high-speed shimmy, I knew there had to be some steering dampening. The one I eventually chose is a WP unit off a Ducati 999 project of mine.” Jakub bought the bike’s fairing, along with a whole bunch of hassle.

“It came from a Honda CB750 and it was styled from late 70s and early 80s racers,” he said. “It was really hard to fit this thing onto the bike. Even the frame that holds the fairing in place took weeks to get right.”

But as a kind of Yin to the fairing’s Yang, the rear end pretty much fell into place on the bike and seemed perfectly matched to the tank’s beautifully flowing lines, along with those of the fairing itself.

“Next I bought a Spark slip-on muffler and a custom-made dB-killer. I’ve got to say that the short Spark Exhaust products are my favourites on the market at the moment.”

On the intake side of things, mounting the K&Ns created some seriously lean carbs, so they had to be rejetted with bigger mains and secondaries. “Now it’s running just a little bit rich and it makes these lovely rumbling pop sounds during off-throttle over-runs.

“A challenge equal to the fairing was the racer’s paint job, which I decided had to match the big letter ‘S’ formed from the combination of the lines in the tank and the fairing.” As anyone who’s tried it will tell you, getting the perfect curves in paint on an already curvy body and then doing it all over again in reverse on the other side can be hellishly difficult. “We eventually got there. And, as a plus, I also managed to brand the bike a little with my logo near the headlamp and an Ugly Motors logo near the engine.” 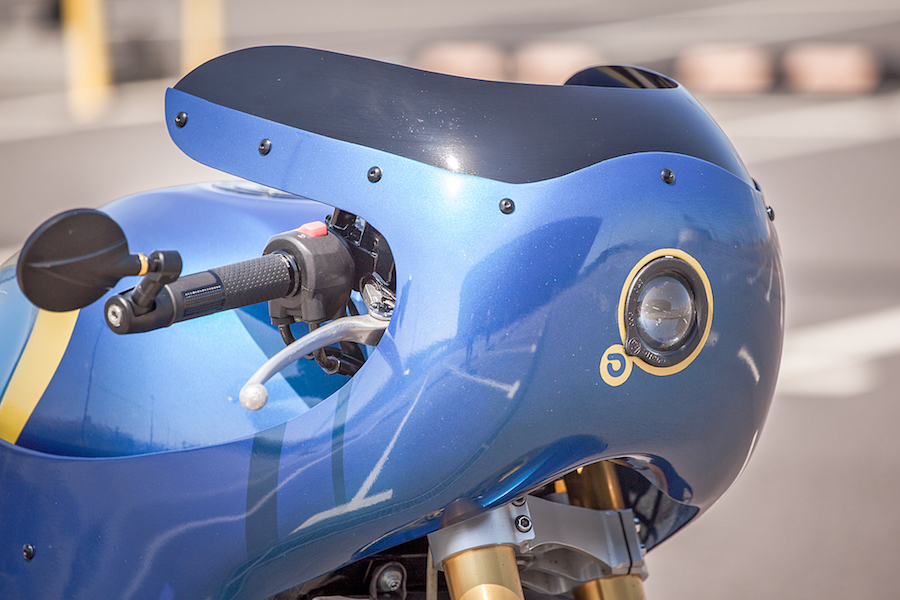 . Minimal approach for the headlight; the fairing took weeks to fit 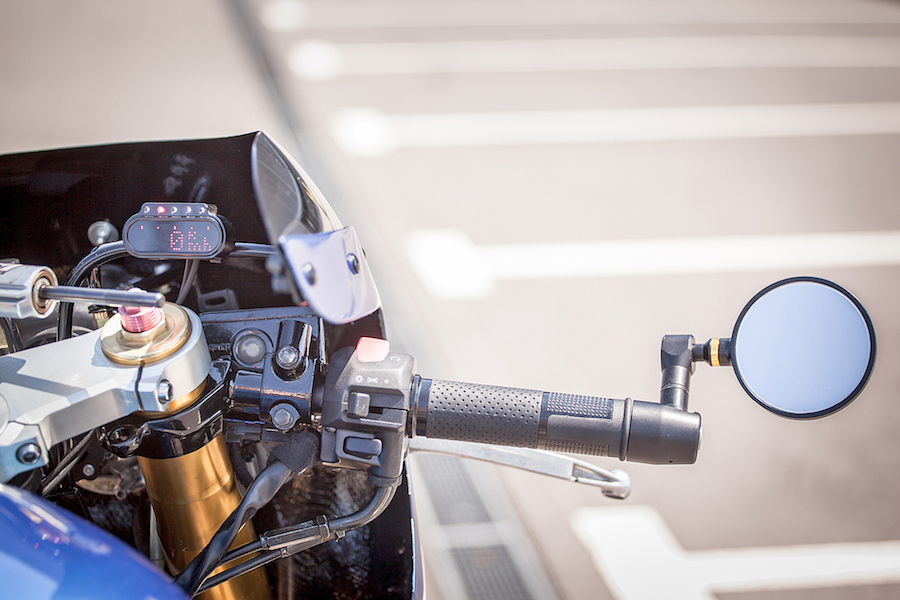 “I’m proud of this racer project,” says Jakub, now with a smile on his own dial. “It was the most engaging project of mine so far, especially with its design. I’m happy with the results of hours of measuring and I think it’s always good to set your goals high. The Suzuki was almost finished after I did the fork swap and made the rear. I could have added a round headlight and been done with it. But now, with a bit more effort, it’s a tribute to all those vintage racing fans around the world and something that really shows the world what Ugly Motors is capable of.”

Like what you see? Well you could soon be doing more than reading about the bike because Jakub has informed us that the bike is now for sale. Interested in riding the lightning for yourself? Just tell ’em we sent you. 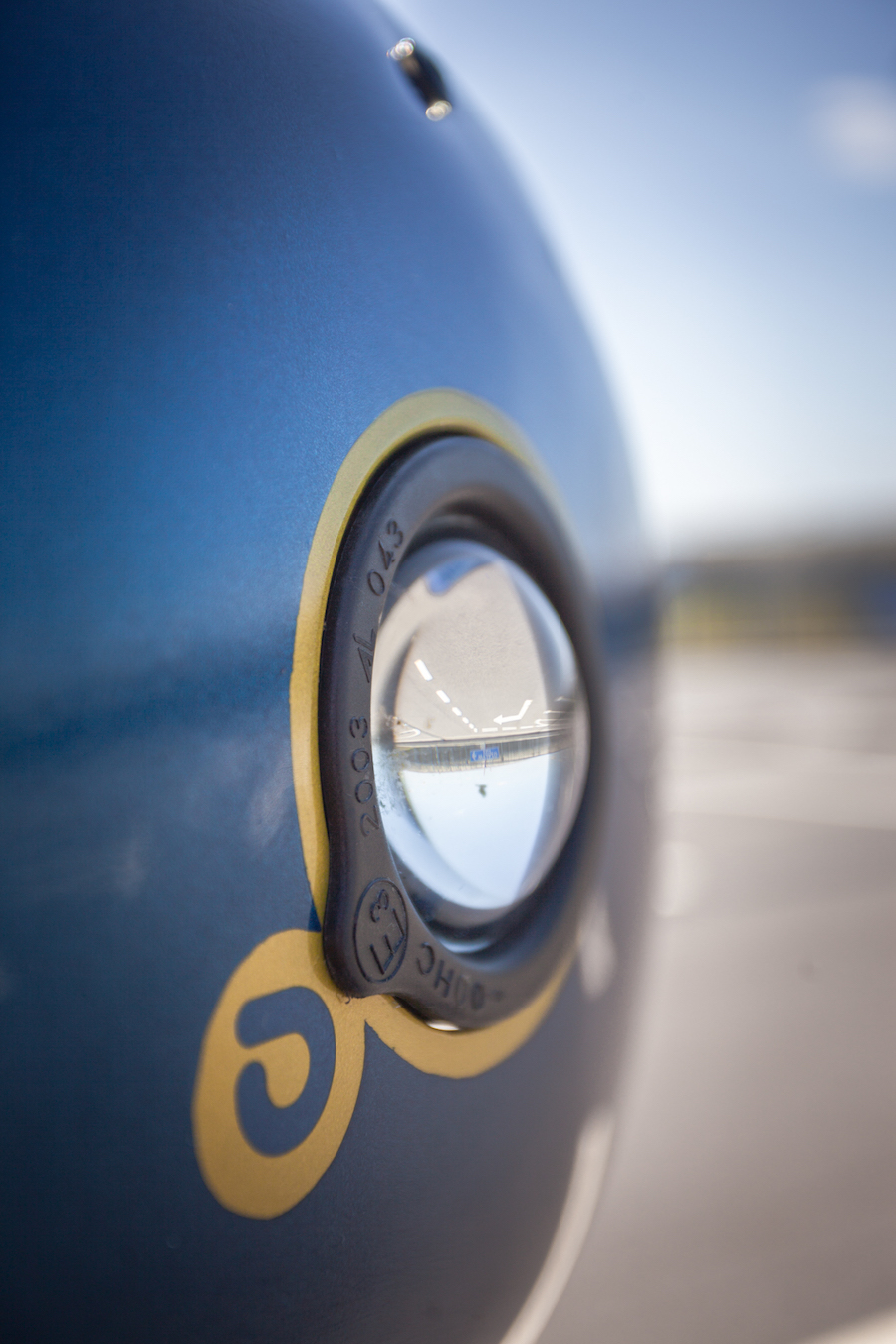 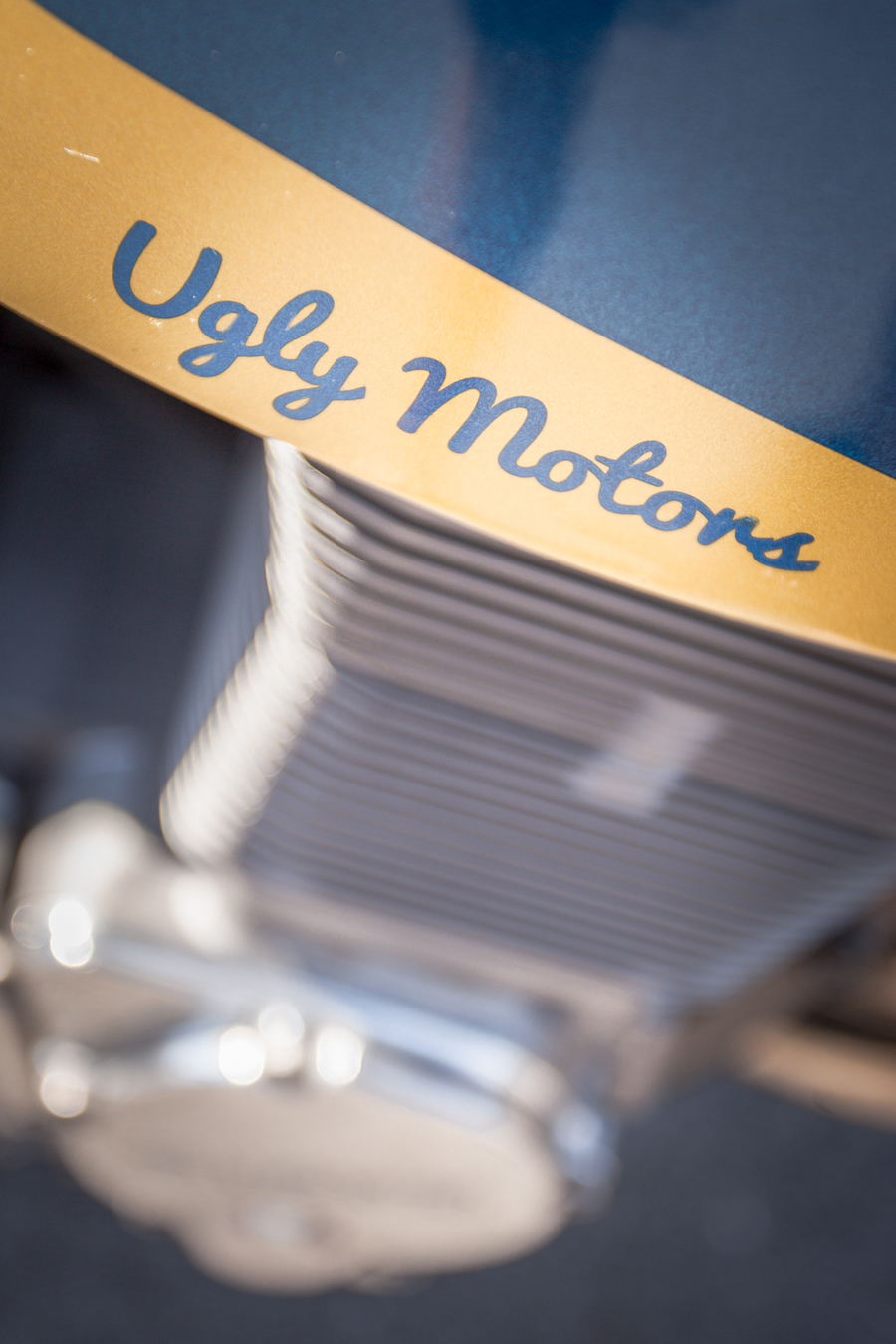