Thanks to some clever upgrades, sexy styling and a killer price, Suzuki’s middleweight nakedbike is more tempting than ever

As soon as I hit the starter button and hear the induction noise emanating from deep within the airbox, I drop 30 years in age. Man, it sounds like the original Suzuki GSX-R750 with its lovely burble. I am lost in a wave of nostalgia and adrenaline is pulsing through my old veins like it once did back in the mid-80s… On this test spin, the GSR’s new replacement aroused my senses more than I’d anticipated, and left me thinking not only does its look, sound and performance hark back to the superbike of old, but its a downright bargain at $11,400 (plus on-roads).

Suzuki has been very aggressive with its 2017 models, giving its range plenty of upgrades, and this new 750 is no exception. The sharp styling makes it one of the more desirable nakedbikes on the market. And thanks to some added features, customers have even more to smile about.

It’s a much tidier bike to look at than last year’s GSR, Suzuki’s previous middleweight nakedbike; more effort has gone into keeping the lines of the design clean and simple. With a market full of choices in the naked sector, it was important the Hamamatsu warriors went full hog, attending to every detail to make this bike as desirable as possible while keeping within a tight budget.

Nothing escaped the attention of the design team, who focused on achieving the obligatory minimalist naked look, but still keeping an undeniable visual link to its GSX-R lineage. The radiator hoses and wiring have been hidden and streamlined, there’s a stronger, slicker-looking tapered swingarm, as well as new side cover cowls that blend in seamlessly rather than appearing like tacked-on afterthoughts. The same LCD dash as is used on its GSX-S1000 sibling is slotted in behind the very small bikini fairing, and tapered ’bars are used to reduce vibration. The bend is natural and the height matches the more upright seating position this bike offers over the GSX-R. The new all-black evers have a quality touch and are easy to reach. The throttle is light and precise and, added to all the other refinements in and around the cockpit, give this bike a high-class feel, especially compared to its GSR predecessor.

The wheels are new, upgraded to a 10-spoke design that suits the demeanour of the bike more than the GSR’s now dated three-spoke design.

The seat is comfortable and well shaped, supporting my gluteus maximus over the 220km test ride with ease. My legs felt slightly cramped over the first few kilometres, but I quickly got used to it and, when the pace heated up, the ergonomics were natural and intuitive. I guess it was the fact that my top half was so relaxed and my bottom half a bit more crouched that gave me that initial sensation. The bike was comfortable for my 173cm frame, and with a short reach to the handlebar and a 820mm seat height, low-speed manoeuvring and parking is completely unintimidating. As on last year’s GSR, the frame of the GSX-S is derived from the GSX-R750. The Gixxer’s racing heritage makes it one of the best-handling sportsbikes on the road and that prowess transfers across to the GSX-S. I’ve been fortunate enough to ride the 1000cc version of this machine and while it, too, is certainly a sweet handler, there’s just something about the 750cc engine matched with this slightly less-rigid chassis which makes the mid-sized bike a joy to ride. It doesn’t have that extra momentum pushing you around in directions you don’t want to be heading, as sometimes happens with big-bore bikes. There is also less mass spinning inside the engine and this, combined with an overall lighter weight, helps make the GSX-S750 feel more effortless in its precision.

The GSX-S benefits from the work Suzuki has done to improve riding aids on its 2017 models. The easy start system is fitted, which allows you to just touch the starter button instead of having to hold it down; it’s a good system which works well and helps to modernise the package.

Of even more value is Suzuki’s Low RPM Assist system which automatically raises the revs as you start to let the clutch out. It’s designed to minimise the risk of stalling, and it’s a comfort for even experienced riders in certain situations, such as performing a U-turn on a busy road or taking off in front of rev-happy traffic. It’s by no means intrusive, but concentrate on it and you can feel it working. 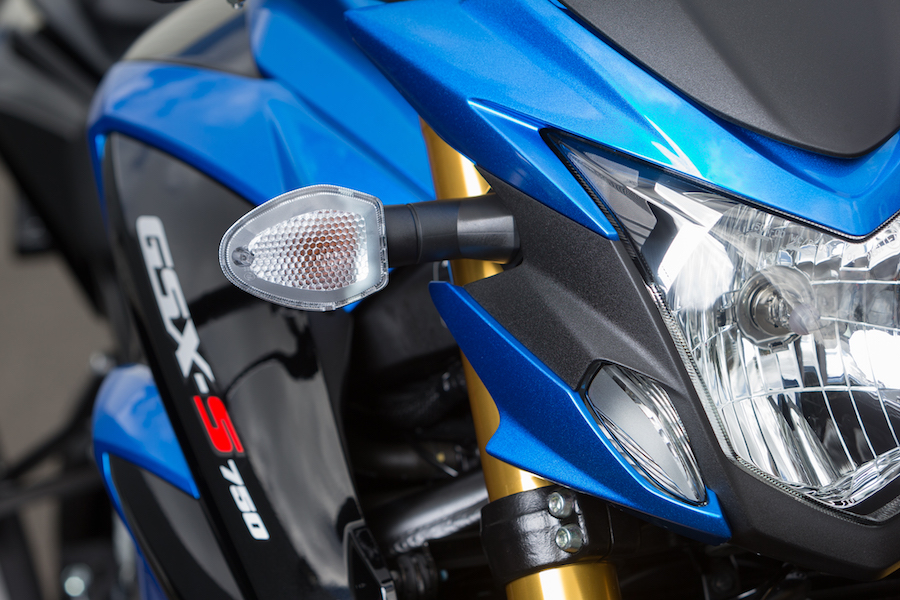 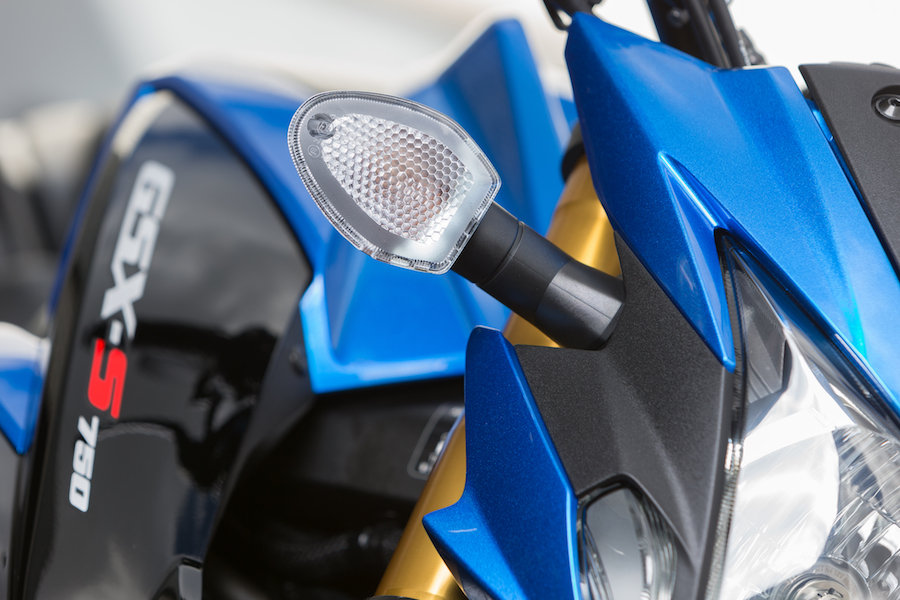 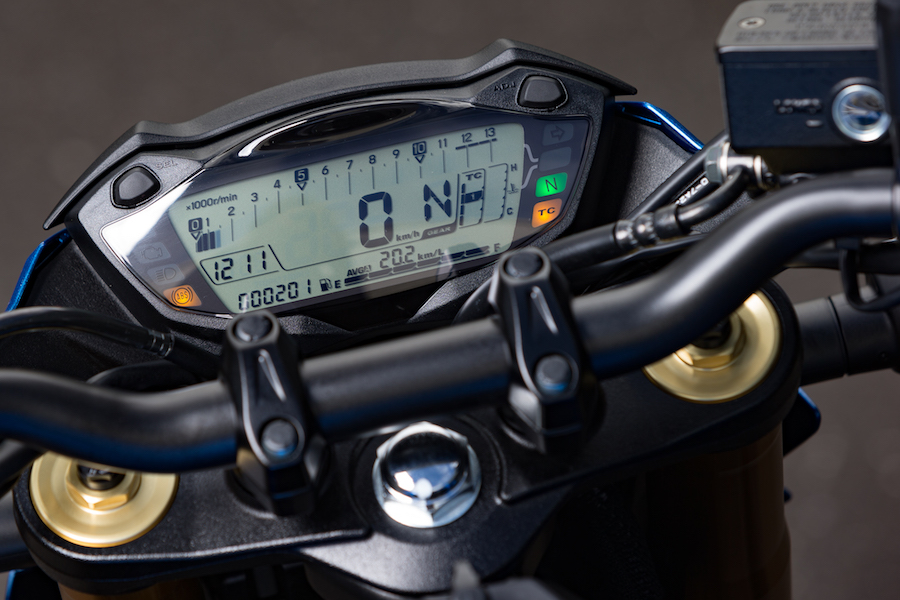 A three-step traction control system has also been added for the first time, bringing the bike into line with other 2017 Suzuki models. There’s a low-sensitivity setting for sport riding, middle for city riding, and a high-intervention map for the wet. It’s not a race system like on the new GSX-R1000, but it’s effective and can be turned off on the fly if you want to ride old-school. It gives you really good feedback and it’s possible to feel it working when the available grip is changeable. We did have varied weather on the ride and it brought home how important traction control is, giving the same back-up on two wheels that we take for granted in our modern-day cars.

ABS is expected nowadays and the Suzuki system’s sensors take 50 samples per wheel rotation, giving it a good indication of the grip available. Like most modern variants, the level of ABS performance is so good I never felt it cut in riding under normal circumstances.

In terms of the engine, the new machine retains the well-established GSX-R750 K5 powerplant from last year’s GSR, but power output has increased by a significant 6kW, peaking relatively high in the rev range, at 10,500rpm. Torque has also risen, albeit only by 1Nm, to 81Nm and also peaks relatively late at 9000rpm.

There are many reasons for the power increase, but most of the gain comes from attention to detail in the crankcase design. A new set of pressure-relieving holes have been milled to reduce the pump effect under the pistons and a by-product of this is increased fuel economy which allows the GSX-S to extend its fuel range to around 300km.

The fuel injectors have also been upgraded from conventional eight-hole affairs on the GSR to long-nose 10-hole units on the GSX, helping create a finer combustible mixture.

A faster bike needs better brakes and the Nissin two-piece radial-mounted calipers work brilliantly, with more than enough performance to pull the 213kg bike down from any speed. The pressure on the lever needed to achieve effective braking power is minimal, and both the feel and bite is significantly improved over the outgoing GSR. The rear is just the way I like it, too – not overly sensitive but still with plenty of bite. 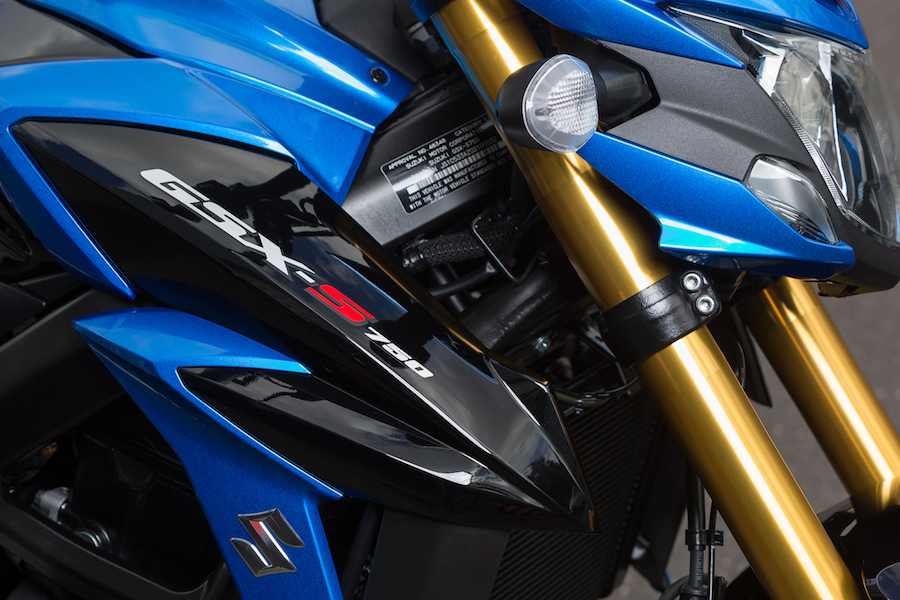 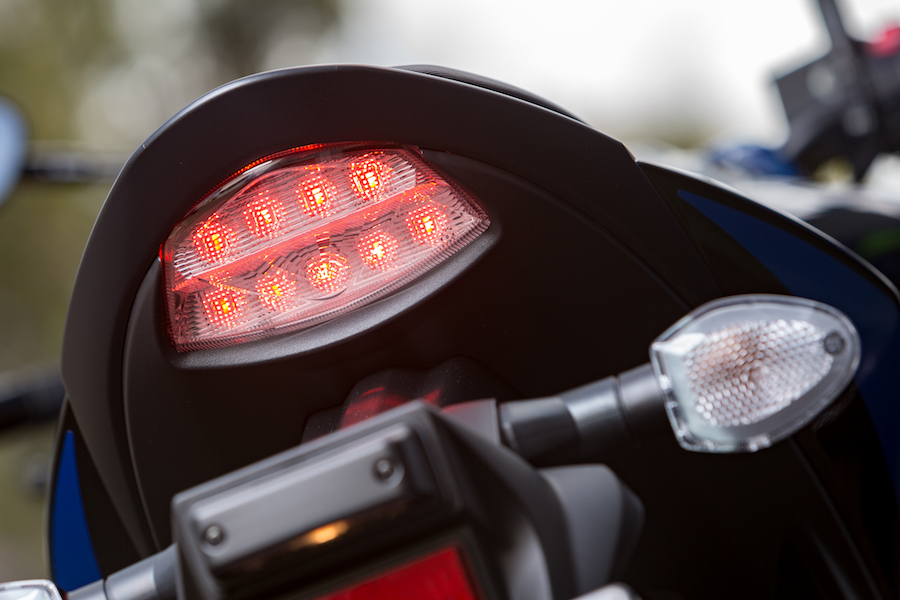 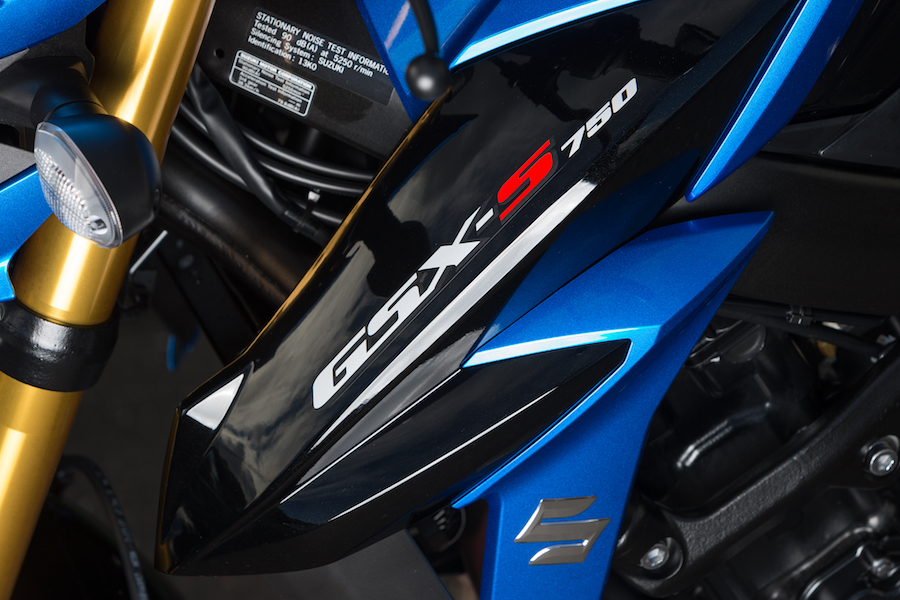 The KYB suspension is well matched front to rear. My test bike’s front-end felt on the firm side, but with adjustable preload on both the 41mm upside-down KYB fork as well as the rear monoshock, there’s the option to set it up for a more plush ride if you prefer.

It’s easy to look at all the individual aspects of a bike and talk about them, but it’s not until you look at the package that you start to understand how well this bike works together. The GSX-S750 really inspires confidence at low speeds – actually at all speeds – but especially during tight or slow-speed manoeuvres. On smooth back roads, the bike handles impeccably, with great precision and line-holding ability.

I found it to be a bike that felt natural from the outset – just like an old friend. I did draw confidence from all the road-oriented safety back-ups working away silently to keep me safe, even if I didn’t use them. 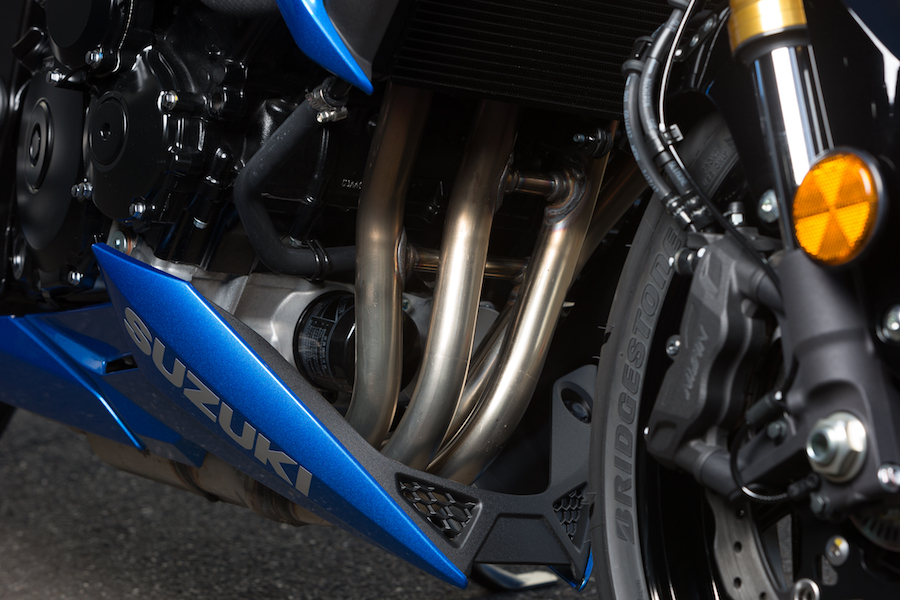 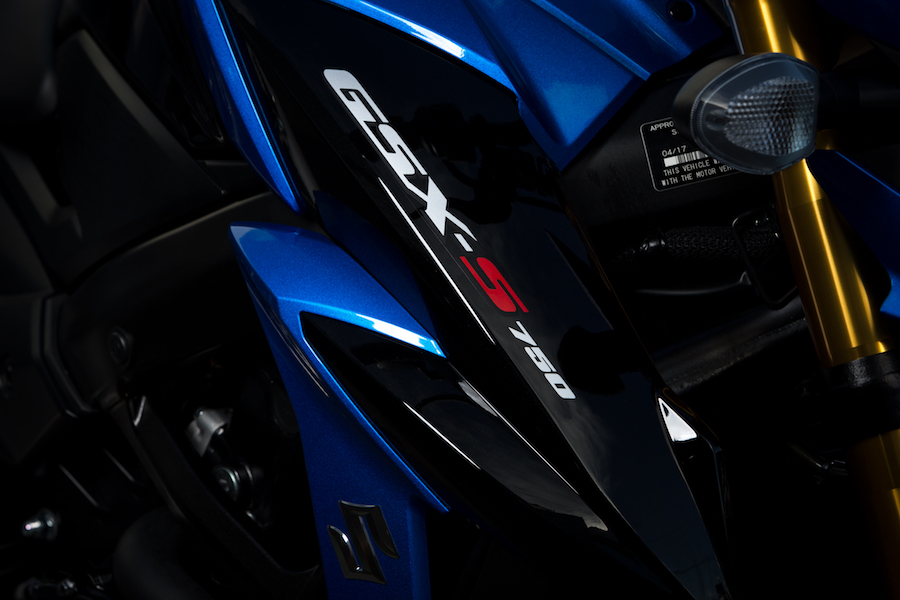 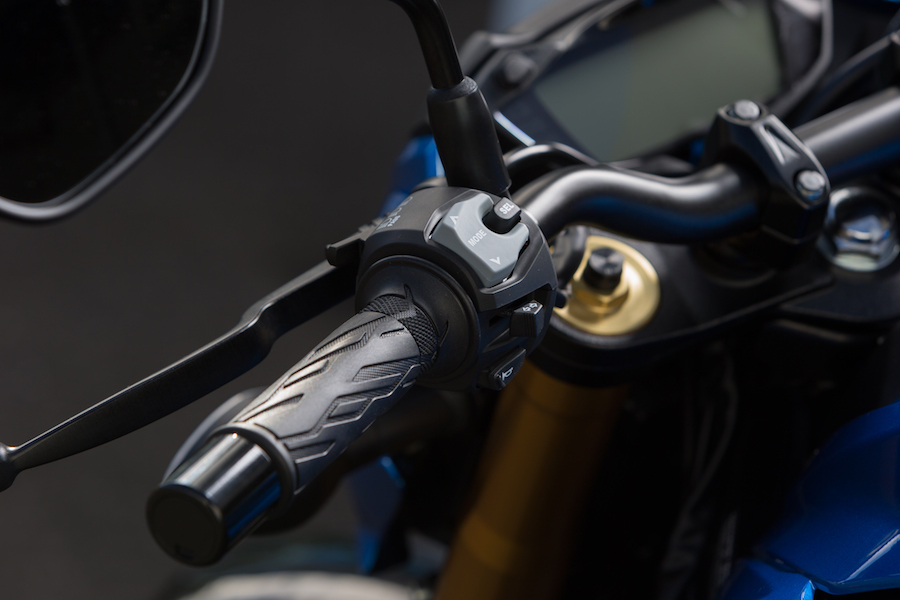 At this point, the bike sounds perfect, and it almost is. But…

There was one particularly bumpy road I was having a bit of a, let’s say, play on, which allowed me to really test the standard set-up of the GSX. Over the bumps at normal speeds the bike gave good feedback and felt predictable and stable, but as my pace heated up, I felt some headshake.

Don’t let this put you off, though, because we were riding the bike well beyond its design brief and the vast majority of buyers will probably never feel it. In any case, it’s an easy fix – a steering damper, like those fitted to the bikes made to play silly buggers on, will fix the problem for the one per cent of people who’ll want more.

Just like Suzuki’s early-80s GSX-R750, this bike, for reasons still unknown to me, stirs the rider within me. It’s not as fast as a litre bike or as nimble as a 600, but there’s something about a 750cc engine with that oh-so Suzuki induction howl that just makes me grin. It’s the sweet spot.

The very first GSX750 was born 37 years ago and, in one form or another, has been on the market ever since. And with this latest version’s feature-packed price of $11,490 (+ORC), we may very well be here in another 30 years’ time still singing its praises.