The Rush is a limited-edition run of 300 units of the already highly acclaimed MV Brutale 1000RR. And when your base bike is already hugely attractive, you’re not going to be far off the mark with the special, in fact it’s a bit like giving a supermodel a makeover. From every angle it’s stunning, the huge carbon-enclosed rear wheel, adaptive cornering headlight, restyled rear end and pillion seat, even a neat little plate to remind you which of the 300 bikes you have – and more carbon than an F1 car.

This is the poster bike of a new generation but it comes at a price; $56,390 (ride away) in standard form and $60,890 (ride away) with the race kit which includes a homologated race exhaust and different ECU, it’s certainly not cheap. 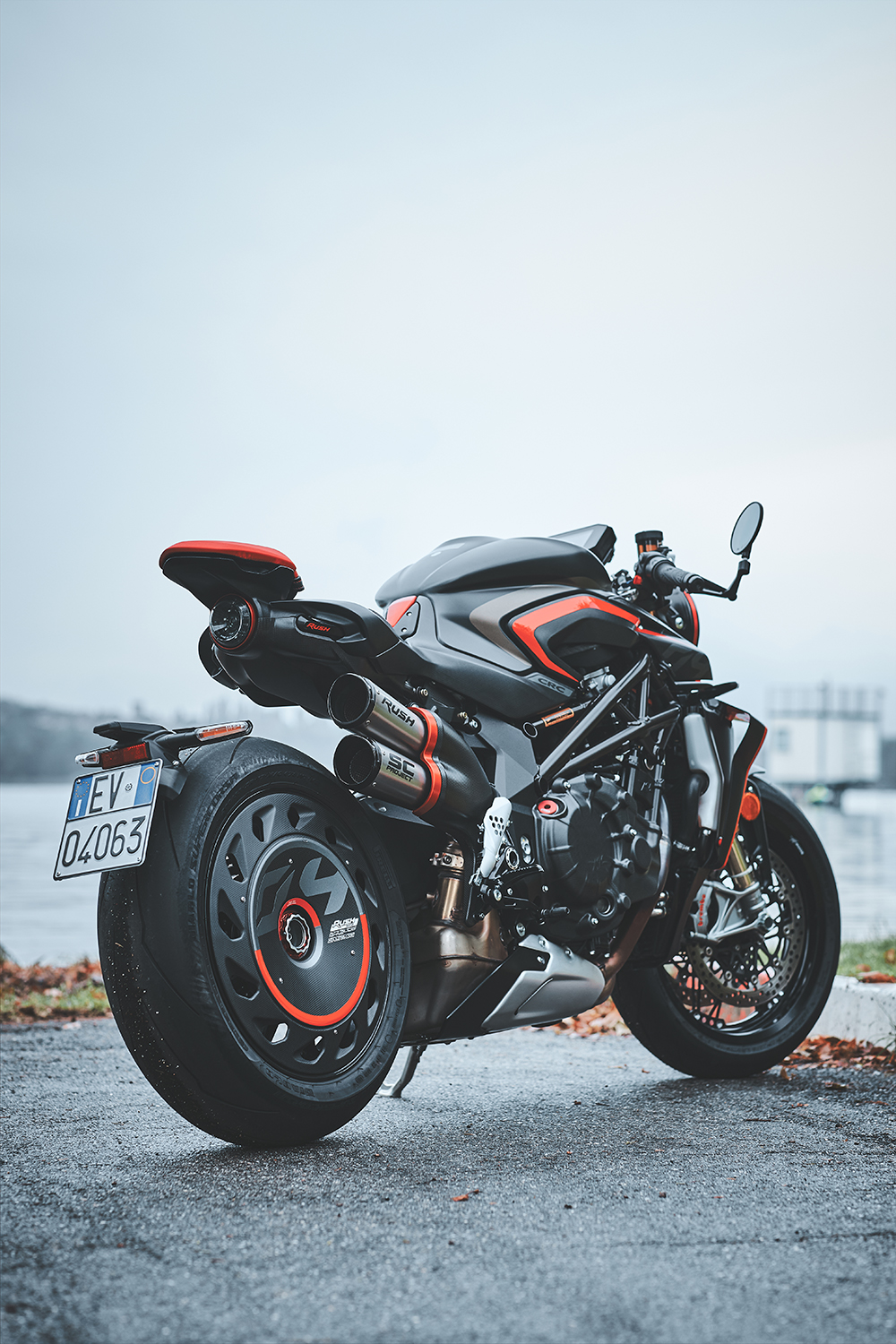 But nor is it just a headline-grabbing show bike – even with the race exhaust it’s still homologated for Euro 4. And the titanium rodded engine will produce 156kW (209hp) at 13,000rpm in this format. That is race-winning performance in a naked, carbon-clad chassis.

We headed to Varese, the home of MV in northern Italy, to put this new and powerful bike through its paces. 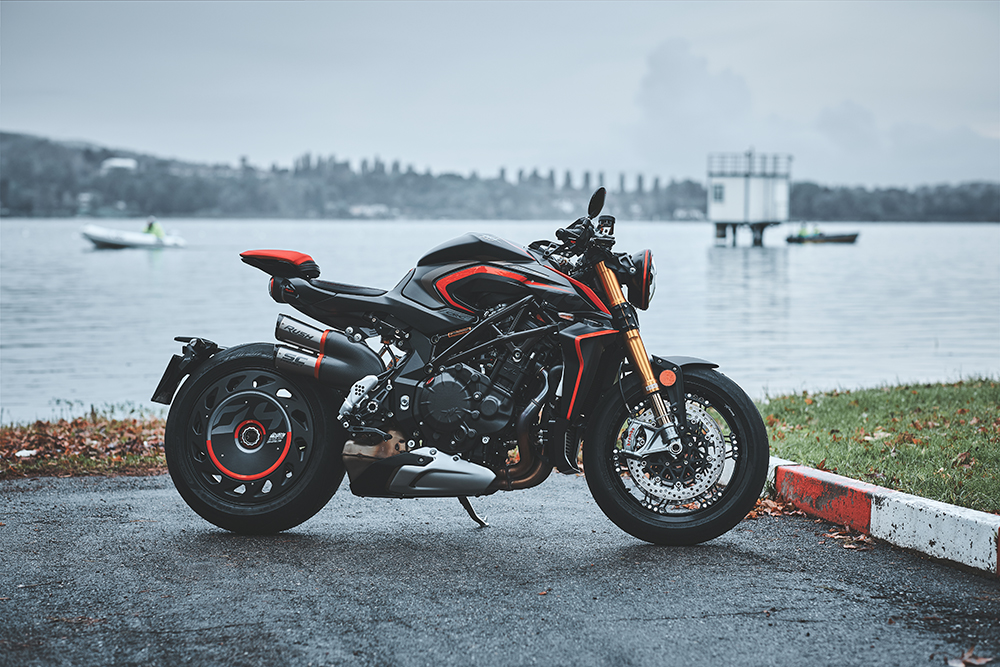 Nearly 210 horses from a normally-aspirated 1000cc engine would, just a decade ago, have been the preserve of fragile, race-winning superbikes, not a road-going engine with normal service intervals. It’s more powerful than most 1000cc nakeds and outguns dedicated sportsbikes like Kawasaki’s ZX-10R, Yamaha’s YZF-R1 and Suzuki’s GSX-R1000.

Peak power and torque are high up in the rev range, with peak torque made at 11,000rpm. The race kit pushes peak power up to 156kw from 153kw and torque is smoother with a three percent increase. There is an additional track-only exhaust system that pushes power even higher and will be available shortly. Watch this space. 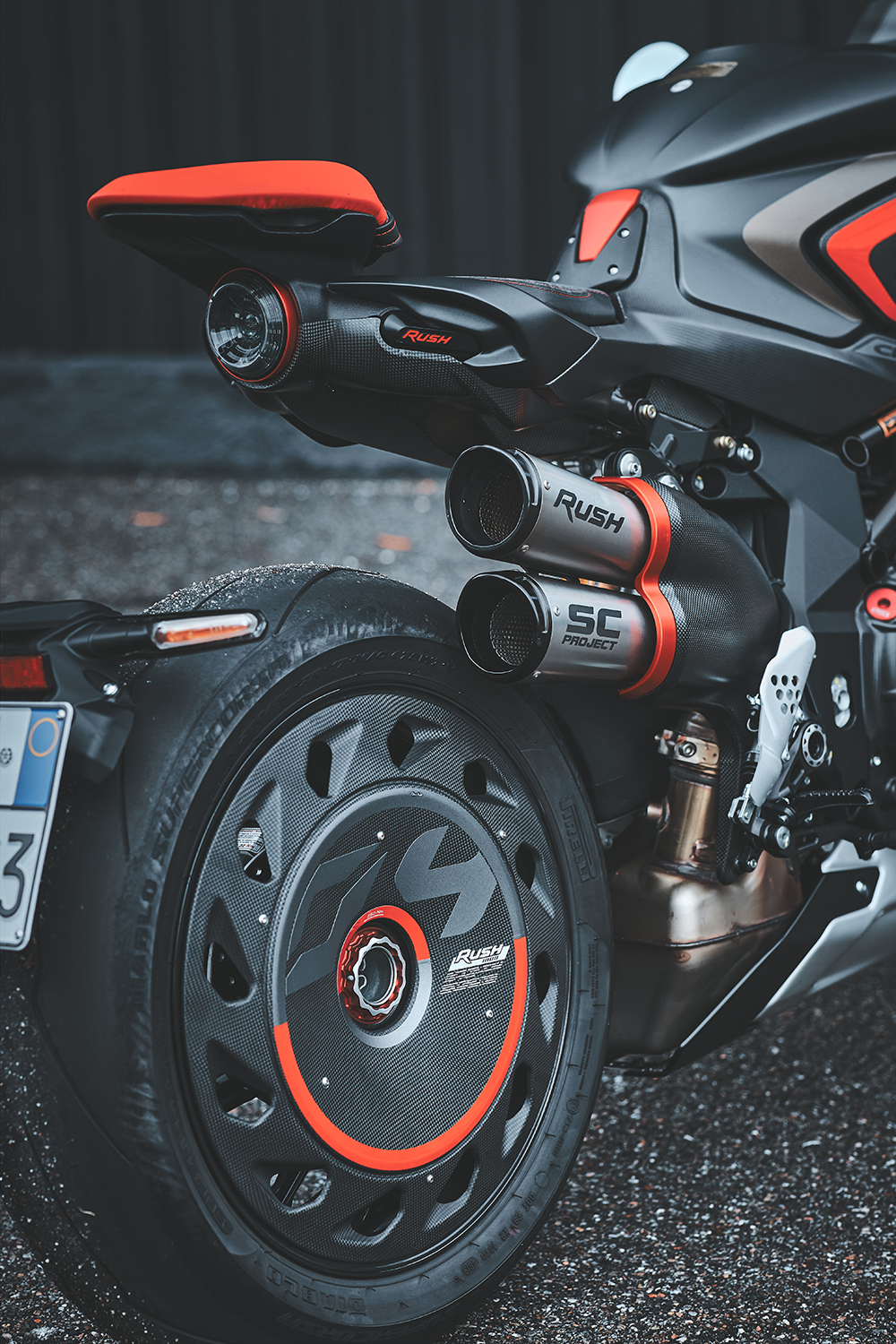 The inline four-cylinder engine is the same as that found in the MV Brutale 1000RR. To achieve the remarkable performance figures MV has introduced titanium conrods, which allow the engine to spin quicker and to higher rpm. There are also new valve guides and camshafts, which allow new timings on both the exhaust and intake valves. Lubrication has been improved and the amount of oil needed for the engine has been reduced.

The powerplant now breathes via a new air-box which is fed from longer air-intakes. On the standard model, the tuned engine releases its gases via a gorgeous four-into-one-into-four exhaust system which is made in partnership with Arrow. However, the race kit version benefits from just two exiting exhausts. There’s new ride-by-wire fuelling with double injectors and four rider modes (Sport, Race, Rain and Custom). 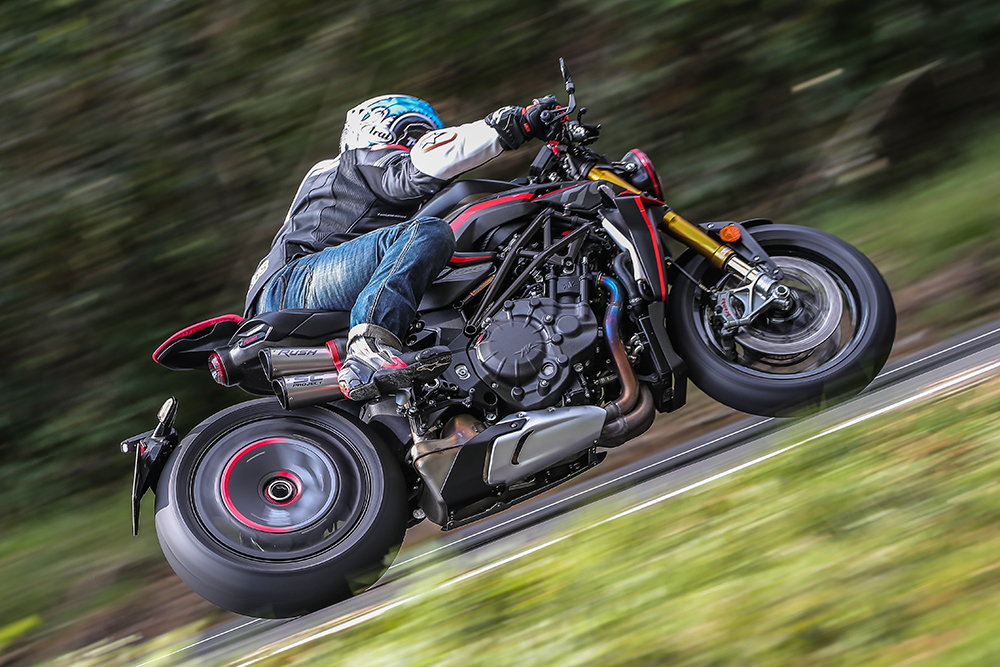 The standard MV Brutale 1000RR sounds fantastic, but now with the race exhaust, it’s taken to another level. If the standard bike is Pavarotti then the race-kitted Rush is The Four Great Tenors. At low revs, blipping the quick-revving engine gives a charismatic growl and a tantalising indication of what is to come.

Higher in the rev range is an overload of the brains. North of Varese, up into the mountains, and each long tunnel was a cacophony of delight as I quickly fed it gears that allowed the engine to scream. Thrashing a sweet-sounding MV through kilometre-long tunnels is highly addictive. 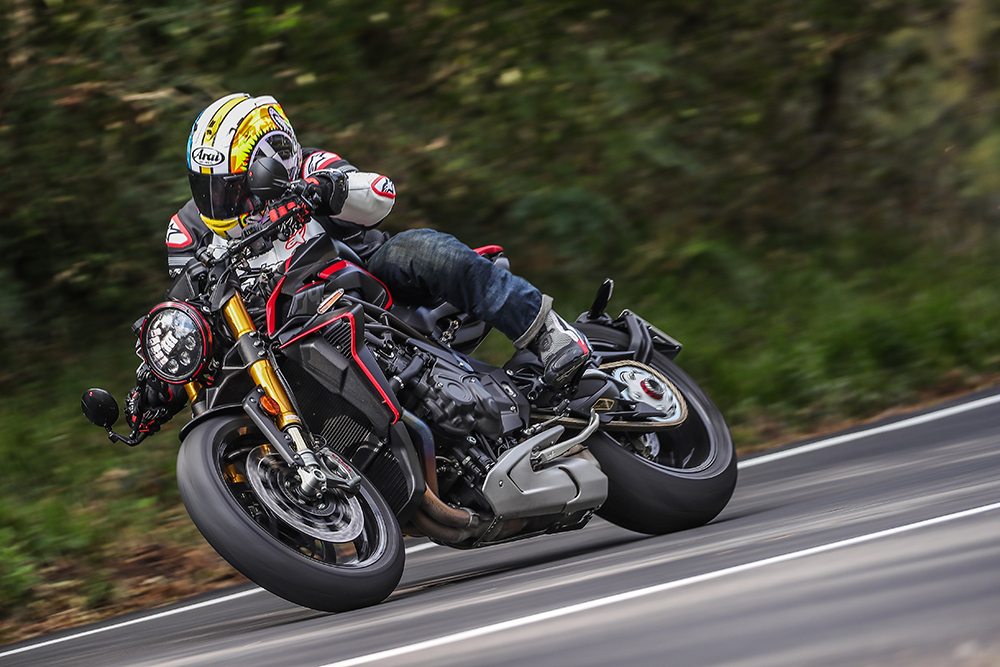 With peak power at an eye-watering 13,000rpm, you’ll find yourself constantly revving this Italian beauty. It loves to rev and it feels like there is little mechanical friction as the revs rise so rapidly. The clutchless quickshifter is effortless and smooth revs perfectly match each gear change. In the hills it’s hard to ride slowly, as each time you see the road open up you tap back a gear or two and are propelled forward at an alarming rate accompanied by that lovely chorus.

Thrashing a $60K MV Agusta in the Italian countryside sounds wonderfully romantic, but the downside is that in the real world there is little go below 6000rpm. In fact, the party only really gets going above 8000rpm. 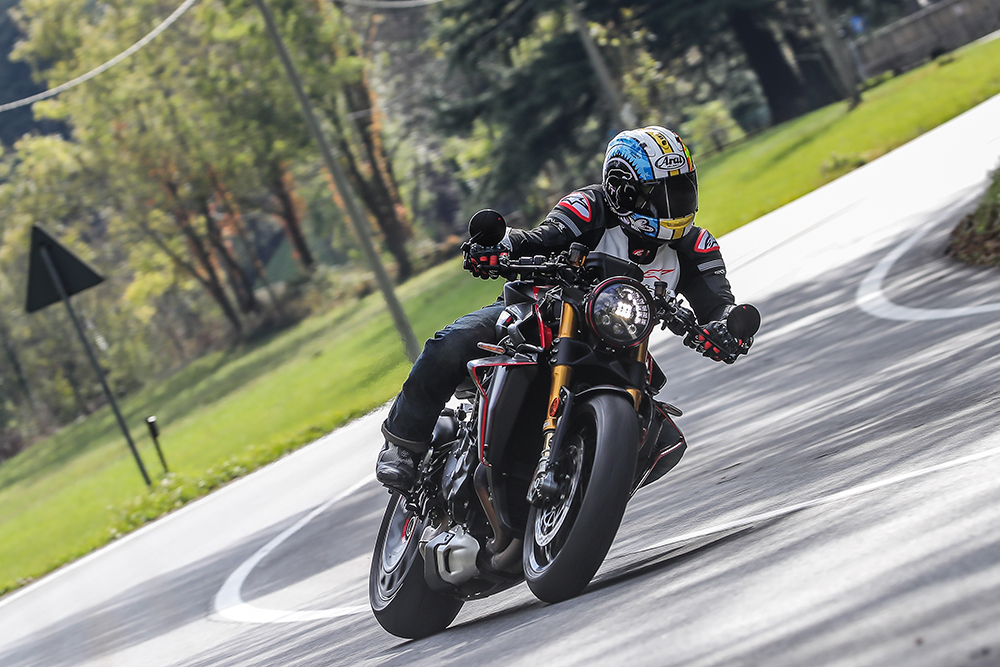 The Rush will certainly pull cleanly from low rpm and the fuelling is smooth, especially in the Rain mode, but it feels hesitant. Once or twice I attempted to overtake slow-moving traffic in fifth and sixth gear, and the engine felt breathless low down in the power. It’s not slow and there isn’t a massive kick of power in the midrange to worry about either, but like the 1000RR the Rush has two different personalities.

Below 8000rpm it’s mild and will go home early on a school night. Above 8000rpm, especially over 10,000rpm, it wants to throw a TV out of a hotel window and drive a Rolls-Royce into a swimming pool. 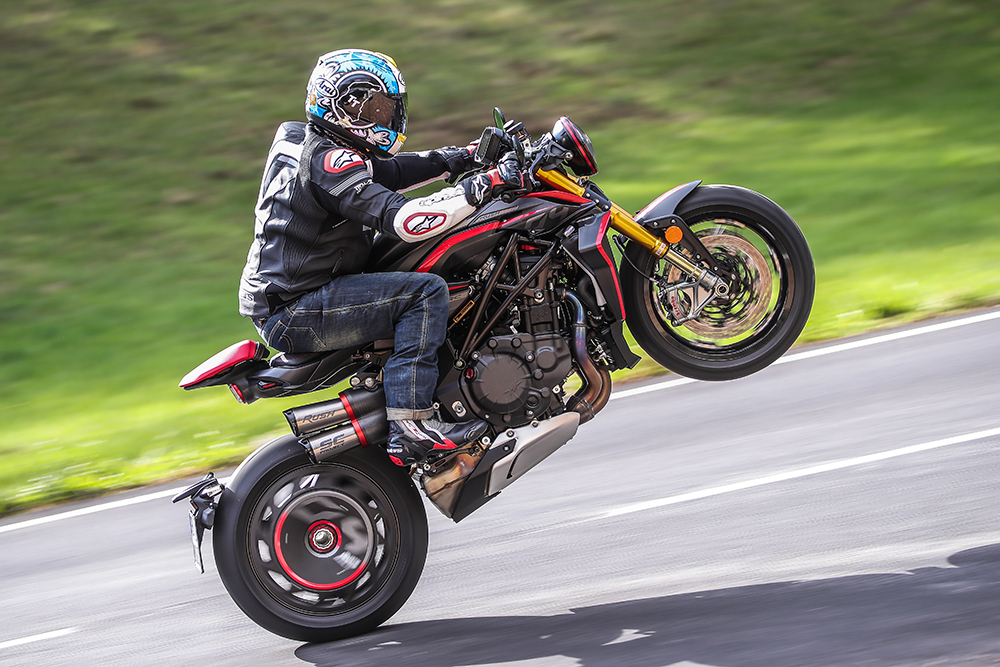 You could argue that no-one who buys an MV Rush will want to ride it around town, aside from posers like myself, so what does it matter? From experience, I know the 1000RR works on the track (AMCN Vol 70 No 05) and I can see the same conclusion of the new Rush. MV quotes a top speed of over 300km/h and, with 156kw, I can see that. In the final third of the revs, the Rush just keeps on accelerating like a racebike. The semi-dropped café racer bars would make this speed almost bearable and I’d love to try one on track. But I’m guessing very few of the 300 units produced will ever see Mugello or Imola. 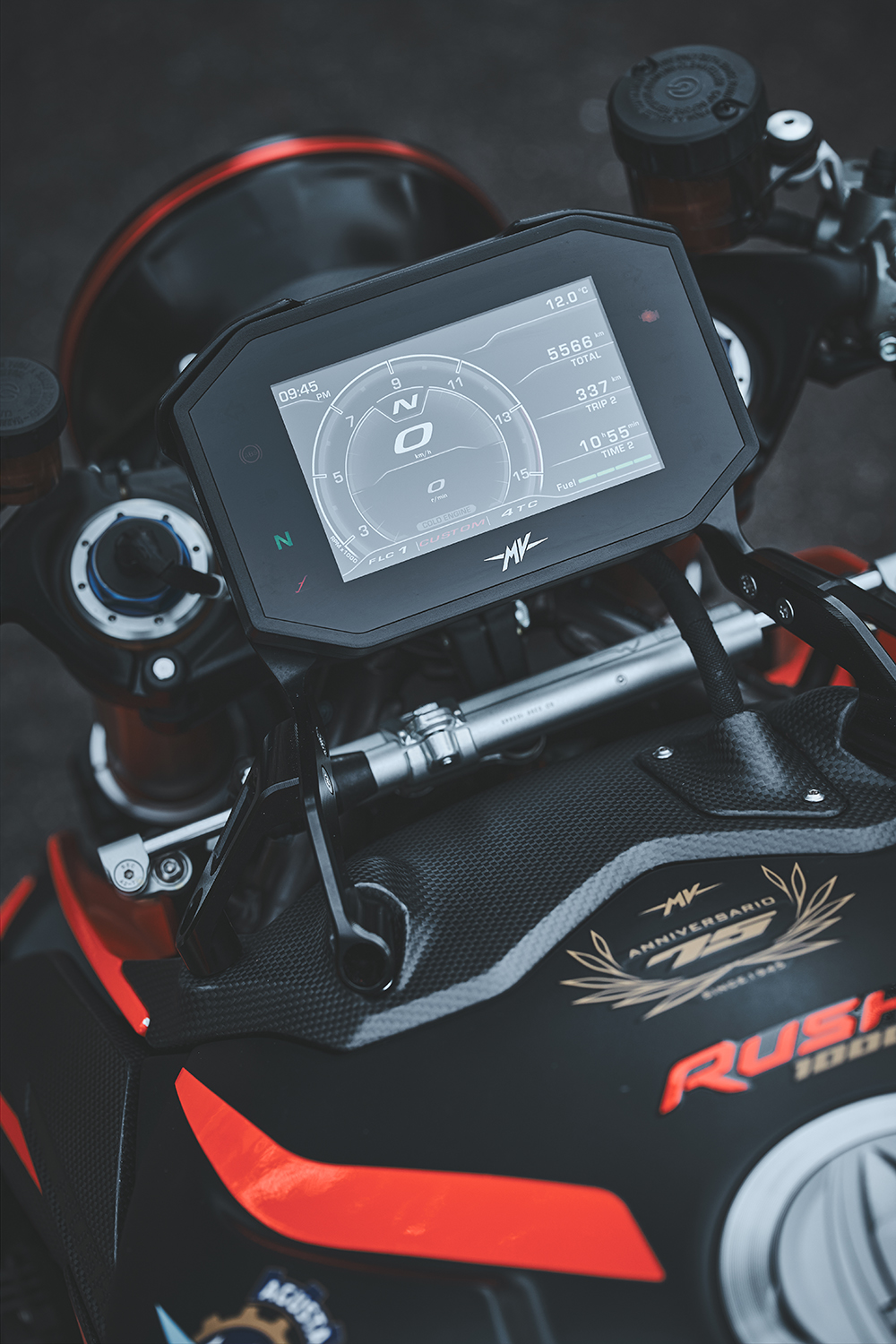 The Rush runs Öhlins semi-active suspension front and rear, and each riding mode changes the action of the electronic suspension (Rain is softer than Race, for example). We only managed to ride the Rush on the road, mainly in its natural habitat – mountains – and on the fast-flowing sections it’s hard to fault. It feels like a racebike with the bodywork removed, while the café racer riding position allows you to attack corners with confidence, and the huge rear 200-section Pirelli finds endless grip. 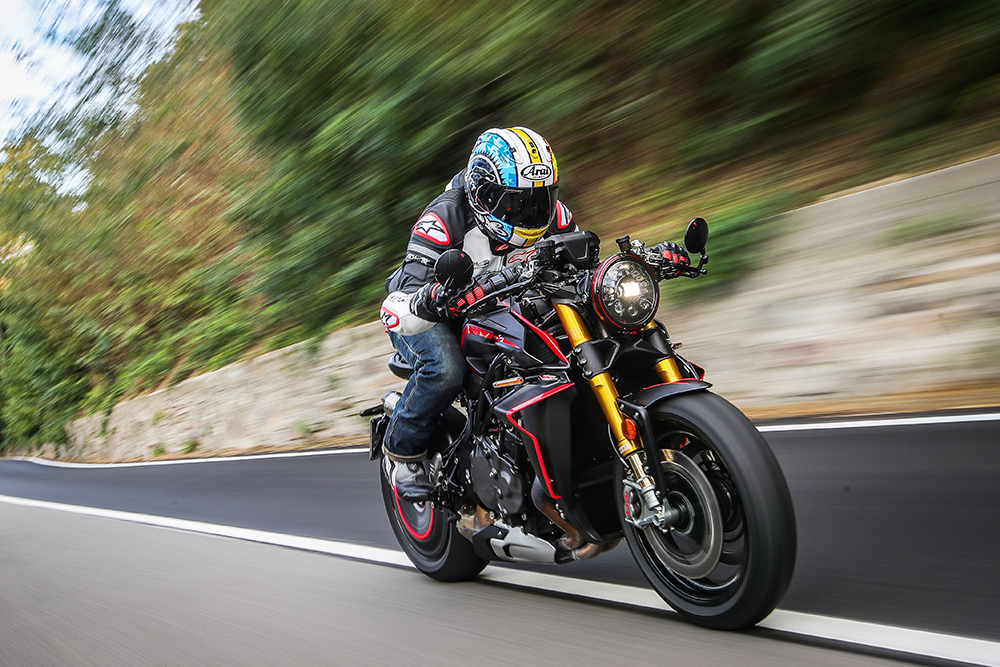 The taut suspension copes with everything you can throw at it, at times while riding in protective jeans, I had to lift up my knee to avoid it touching. You sit more in the bike than on it, out of the wind, and it’s less physical than most nakedbikes. Everything works: peg position, rear seat hump – you can really tuck in carrying enormous corner speed with no fear of understeer like some nakedbikes which push the front. The sporty handling will transfer on track, despite its glamorous looks the Rush will be more than capable of holding onto a sportsbike on a track day, and even embarrass a few with superior power. 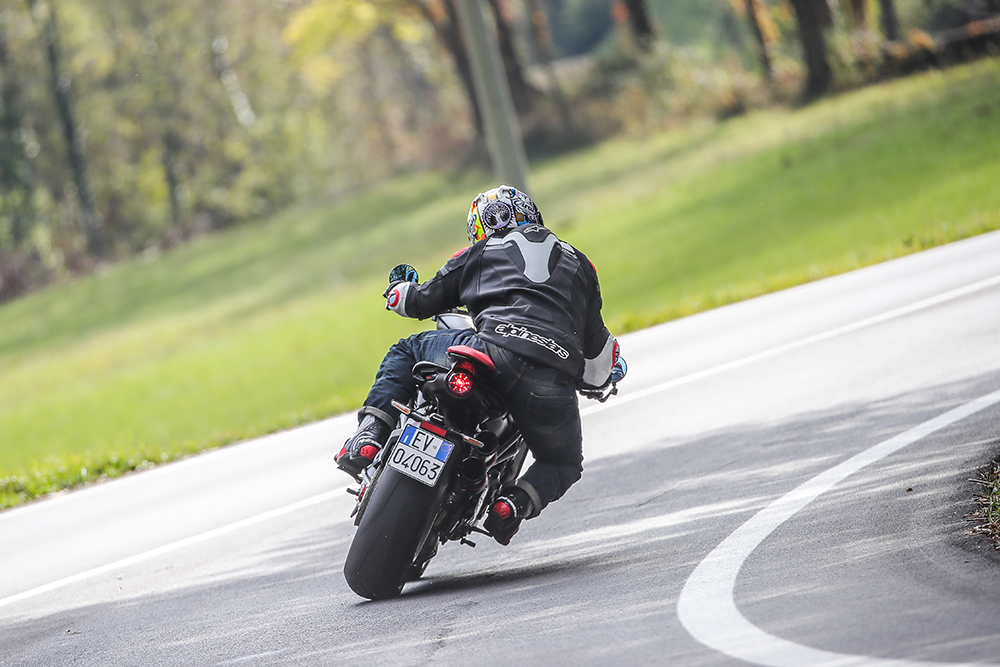 There is an highly addictive lean angle and G-Force display on the full-colour dash. You can check your lean angle mid-corner with a quick glance, or see the G-Force as you accelerate hard. The clocks are excellent and change colour as you enter tunnels as they react to a lower light level, but they are a little hard to see when the sunlight is directly behind you.

However, there is another side to the racebike-like handling. Even in Rain mode the suspension is harsh when the road isn’t racetrack-smooth, especially at slower speeds around town over road imperfections like cobbles, potholes and speed humps. It’s not like riding a skateboard over cobbles, it’s not agony, but with such sophisticated suspension I would expect the ride to be a little plusher in the Sport and Rain modes. 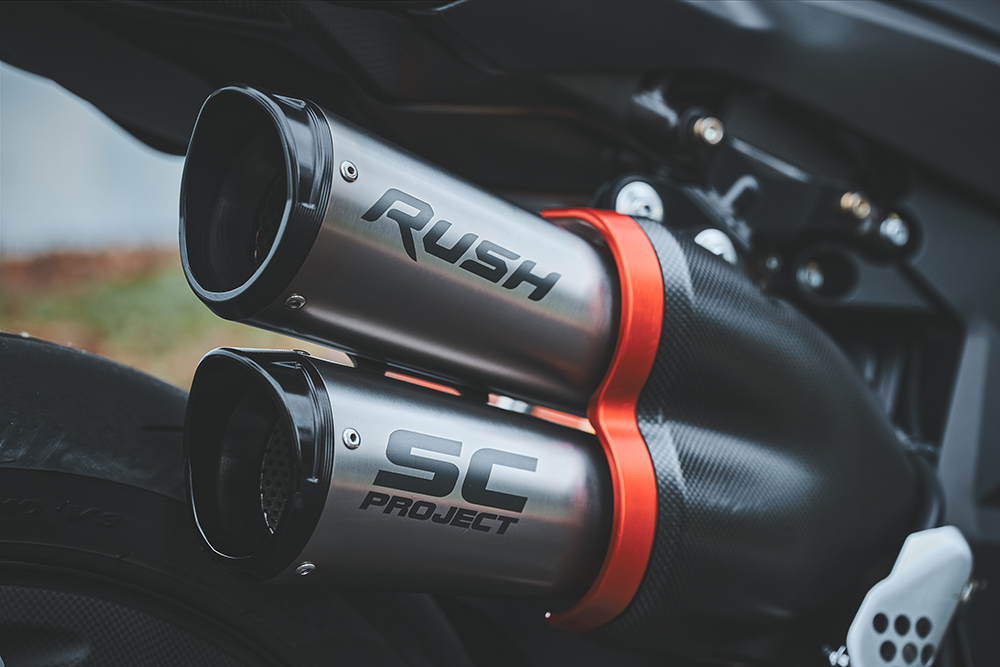 A relatively thin seat exaggerates this feeling further. It’s simple to change the suspension and, if it was my bike I’d quickly change the Öhlins to allow a softer ride on the road, which would make the ride comfier for motorway cruising for rider and pillion. Speaking of which, the pillion is going to have to be tiny and brave, but to be honest, they only upset the handling, so give them the money to catch a cab. 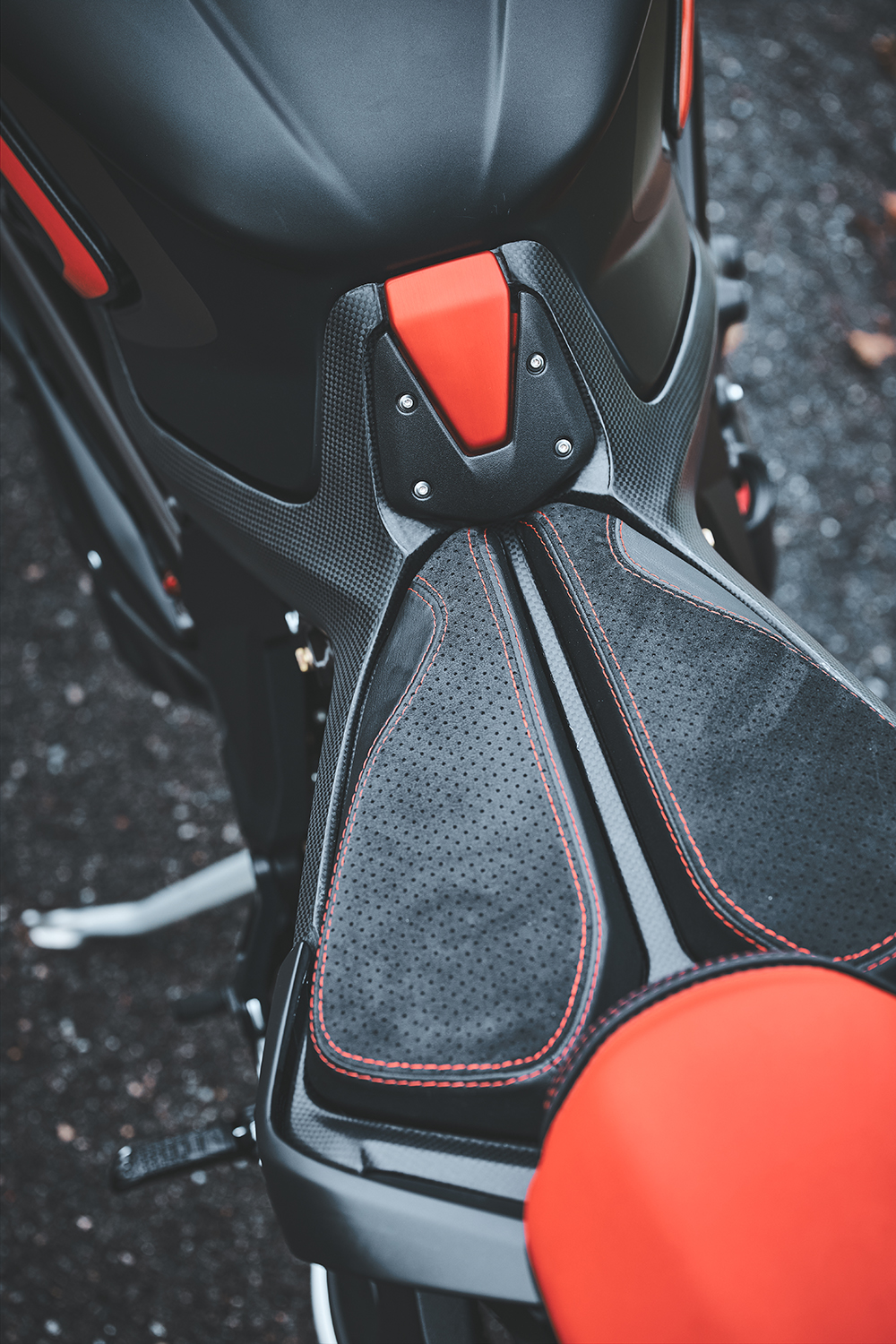 The cornering ABS is welcome support and on the road isn’t intrusive. One finger on the span adjustable lever is enough to stop the rev-happy fun. Again, like the rest of the bike, the stoppers are racebike spec, you really don’t need anything more. I know from experience the Bosch ABS 9 system can be a little intrusive on slick tyres when pushing for lap times on the track, but if you’re fitting race tyres and pushing for fast laps on the Rush, then you’ve probably bought the wrong bike. 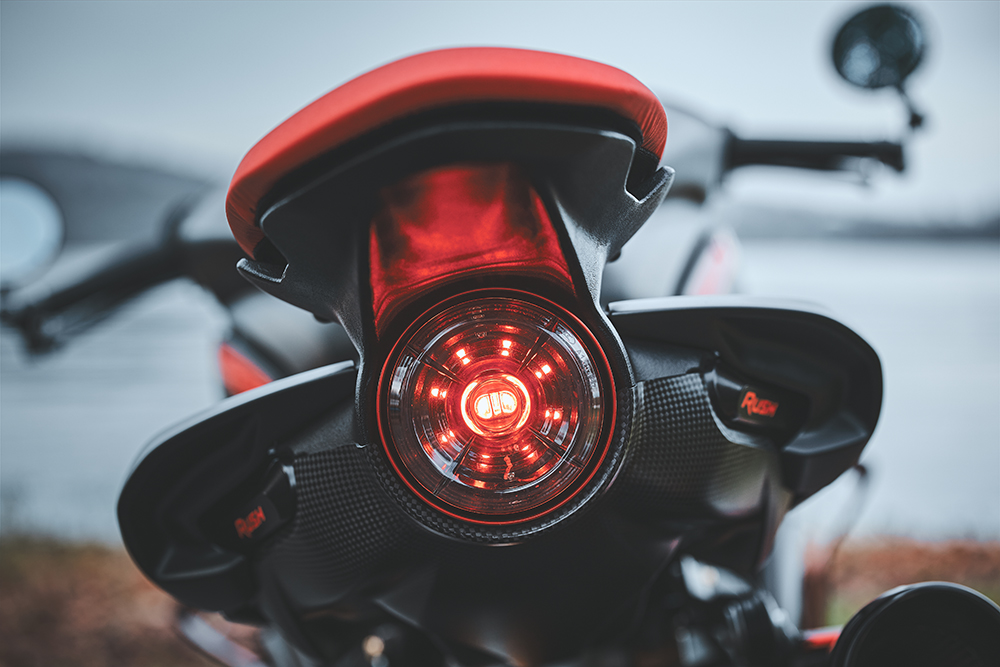 As you’d expect from a $60K supernaked, it’s dripping with rider aids and the very latest technology, which is easy to navigate and adjust through the dash. The rider aids are clearly shown by a bike illustration on the right side.

A six-axis IMU is the brains behind everything which means both traction control and ABS braking are lean-angle sensitive. There are eight levels of TC, which can also be de-activated, again via the dash or your phone on the MV app. It’s simple and easy to do and clearly shown on the dash. A real plus point is the dash/bike remembers your last setting when you reduce the traction control, so you don’t have to re-set your traction every time you ride. 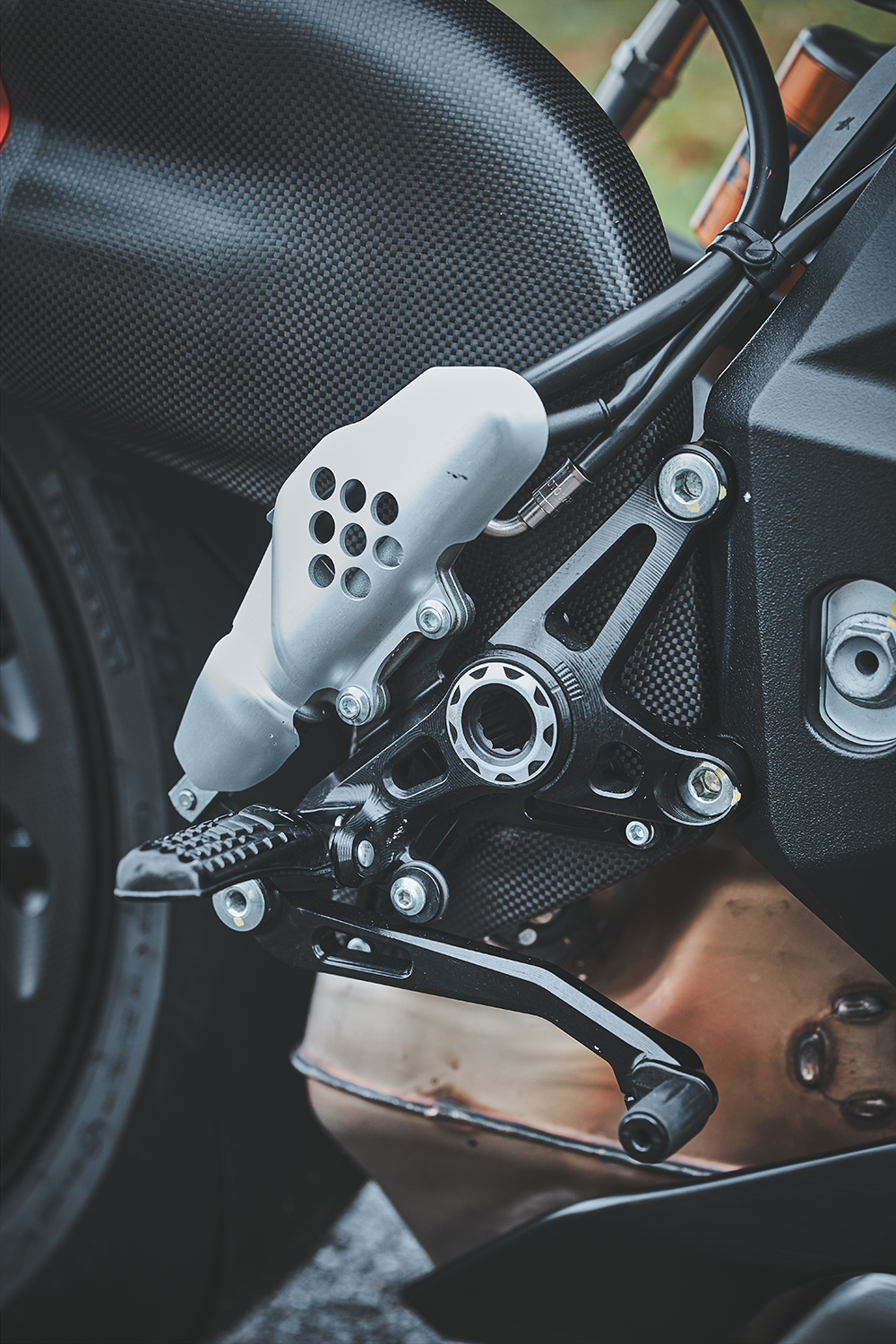 MV call its anti-wheelie ‘front lift control’, and this is either on or off, there aren’t multiple settings unlike most other bikes in this category. The idea is that the lift control limits the engine’s torque, which reduces the acceleration slightly to control the front wheel lift. The front will still hover above the ground, but you’re still accelerating hard, not cutting the power with the front end dramatically dropping and reintroducing again – the pogo effect some machines have as their electronics try to control the wheelie. There is also launch control as standard, plus that up-and-down quickshifter and cruise control (on the right ’bar). 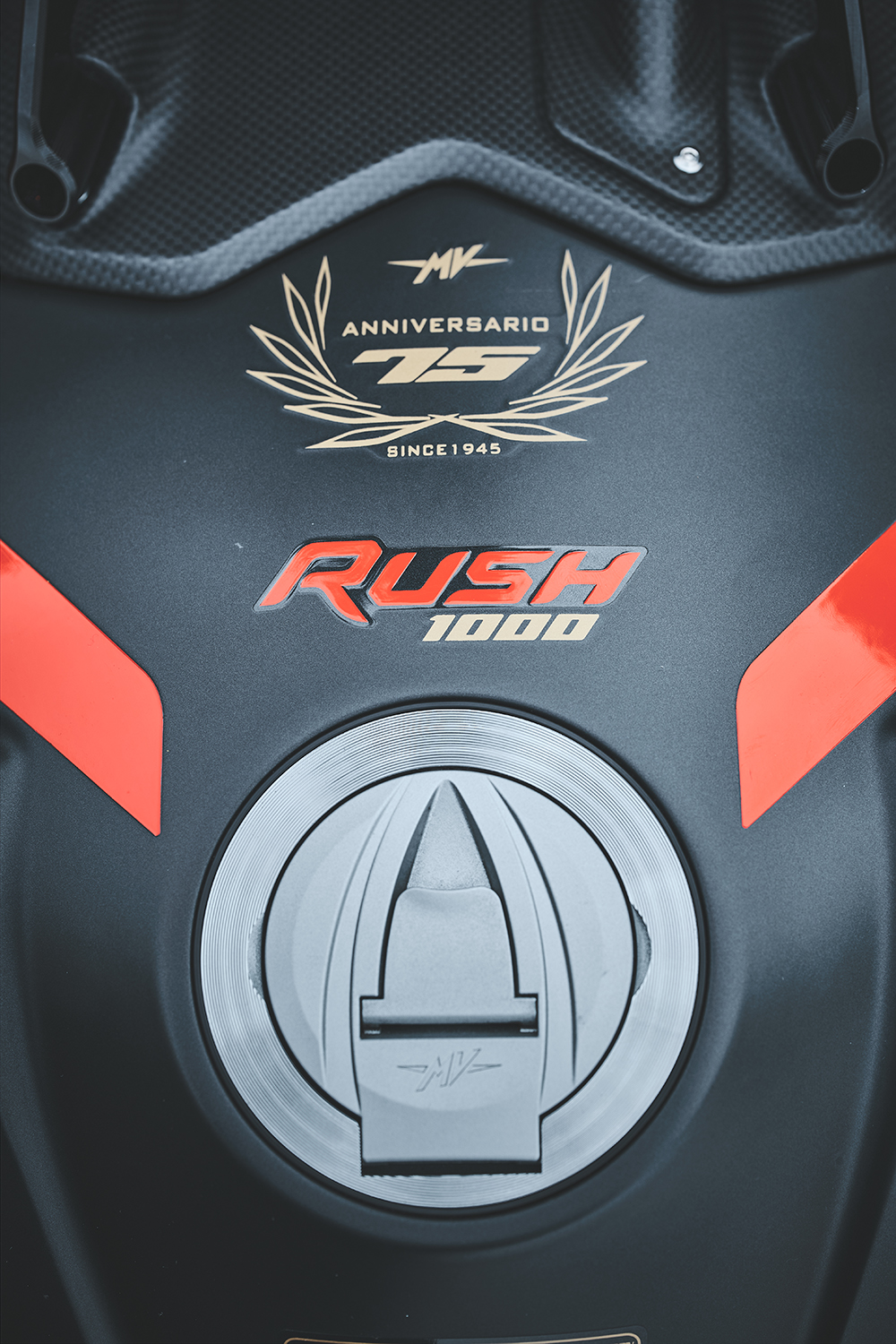 The rider aids are excellent, you don’t ‘feel’ the systems working. They are there to keep you safe, allow you to ride to the conditions, your style and skill. The switchgear and clear dash make it easy to flick between modes, even turn off the traction and front-wheel lift on the move for some wheelie fun which, of course, it does effortlessly. 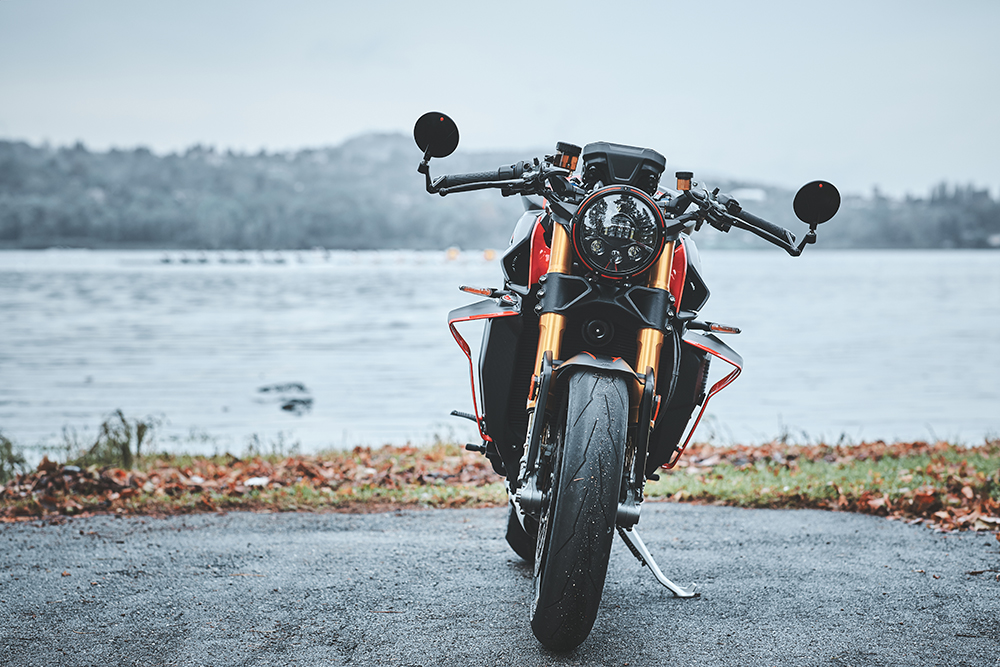 It’s a limited-edition run of just 300 bikes sold worldwide but, at nearly $60k, it’s a lot of money, though I’m sure the price will be worth it for some collectors and enthusiasts. There is a good chance the Rush won’t depreciate and more than likely become a target for collectors, while I doubt you’ll see a Rush being ridden in anything but perfect road conditions. The standard MV Brutale 1000 RR is $52,190 (ride away), which means you’re only paying $4200 for the limited-edition Rush. That makes it a bargain, doesn’t it? For reference, the race kit is an extra $4500

The Rush is on par with other exclusive models like Ducati’s Panigale V4 R ($63,190) and Kawasaki’s Ninja H2 R ($65,400). Interestingly, Aprilia’s track-only Tuono V4 X is expected to be priced slightly higher, so the new MV Rush may not be the most expensive nakedbike on the market. 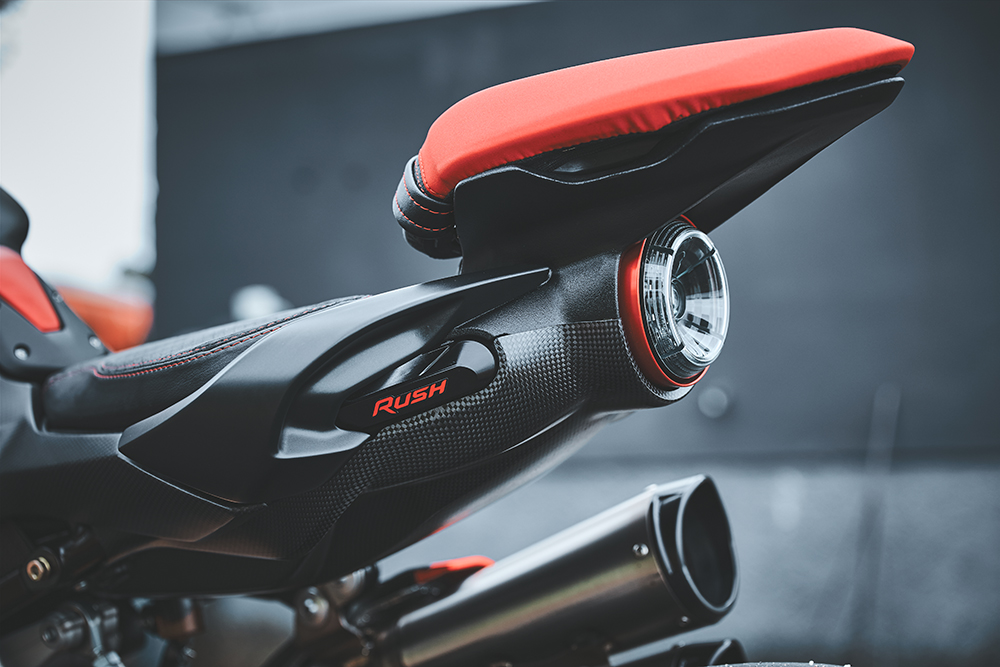 If you’re looking at the price tag, then you’re also probably looking at the wrong bike. This is the Lamborghini or Ferrari of the bike world, price is almost irrelevant, it’s how the bike performs, sounds, looks, and ultimately how it makes you feel.

Riding in the hills north of Varese, letting the engine scream through the hand-cut tunnels that bore through the mountains, hitting the passes and sweeping bends is paradise. It sounds and looks fantastic, and handles like a racebike with no bodywork.

Yes, it’s not very comfortable, the suspension is harsh around town, and there are a few niggles like reflections in the dash. But you don’t buy a Ferrari because it’s comfortable and has good boot space, and I don’t think anyone has ever complained about their Lamborghini’s passenger comfort. This is a bike you own because you love it and you want it. 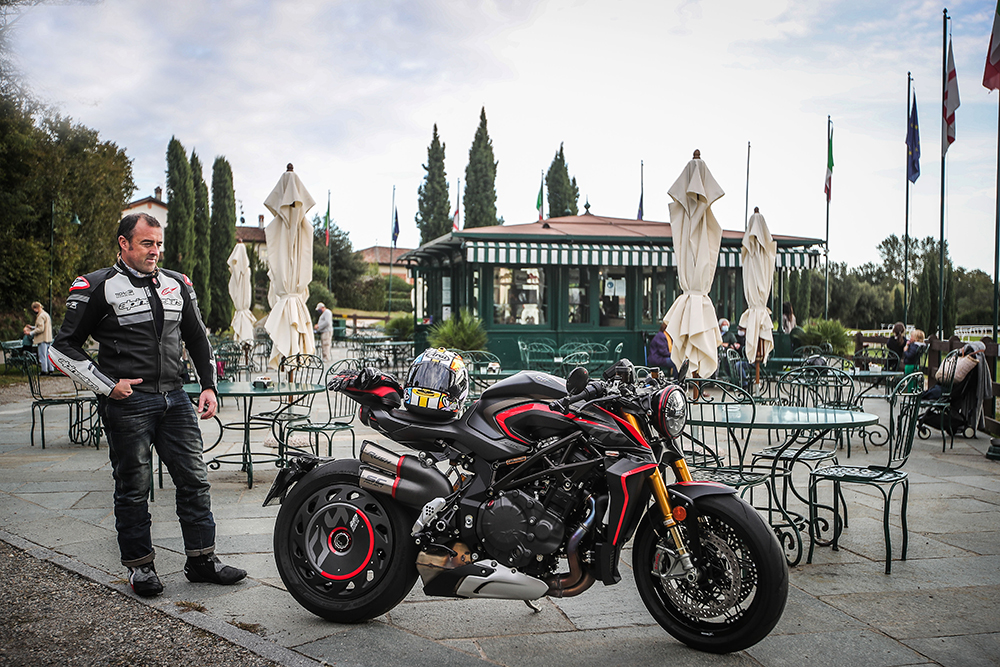