This was another instance when the FIM Stewards waded into the thick of it. A week on from dishing out last lap penalties to a trio of Moto3 podium contenders, the Moto2 race wasn’t decided on the track, but rather by officials.

Just as he did in the previous week, Jorge Martin (Ajo KTM Kalex) had led from start to finish, resisting a late onslaught from an inspired Marco Bezzecchi (Sky Racing VR46 Kalex). Having watched his lead crumble from 1.9 seconds on lap 16 to just 0.3s starting the final lap, Martin was using all of the track and then some as he defended in the final sector.

Despite crossing the line in first, the former Moto3 World Champion had touched the green paint at the end of the kerb on the exit of turn eight. The FIM Stewards have made it clear: exceeding track limits on the final lap in any way is enough to warrant a one-place penalty. A stunned Martin was subsequently shown to the runner-up slot in parc-fermé.

“At the end of the race my front tyre wasn’t good enough and I knew Bezzecchi was coming,” a disconsolate Spaniard shrugged afterward. “Losing out this way is painful.” The decision took away from what was an absorbing cat-and-mouse fight between two of the sports coming stars. 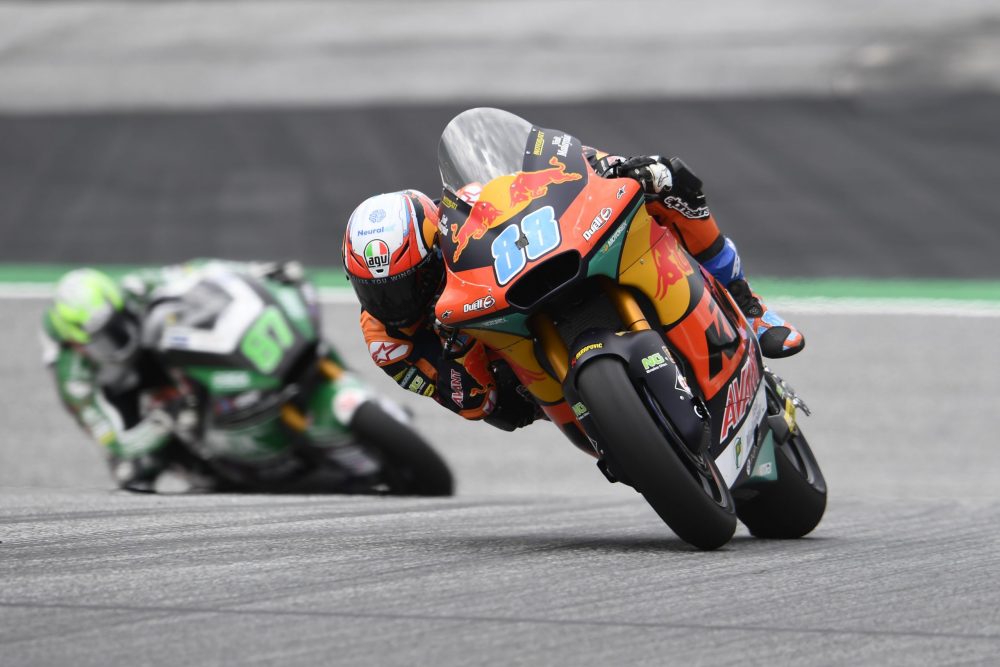 Seventh on the first lap, Bezzecchi took until lap 16 to overtake the spirited Australian Remy Gardner (Onexox SAG Kalex) for second. From there he honed in on Martin’s rear tyre, but ultimately didn’t have enough to attack. Crossing the finish line 0.060s behind, he was soon taking in his first win in the intermediate category. 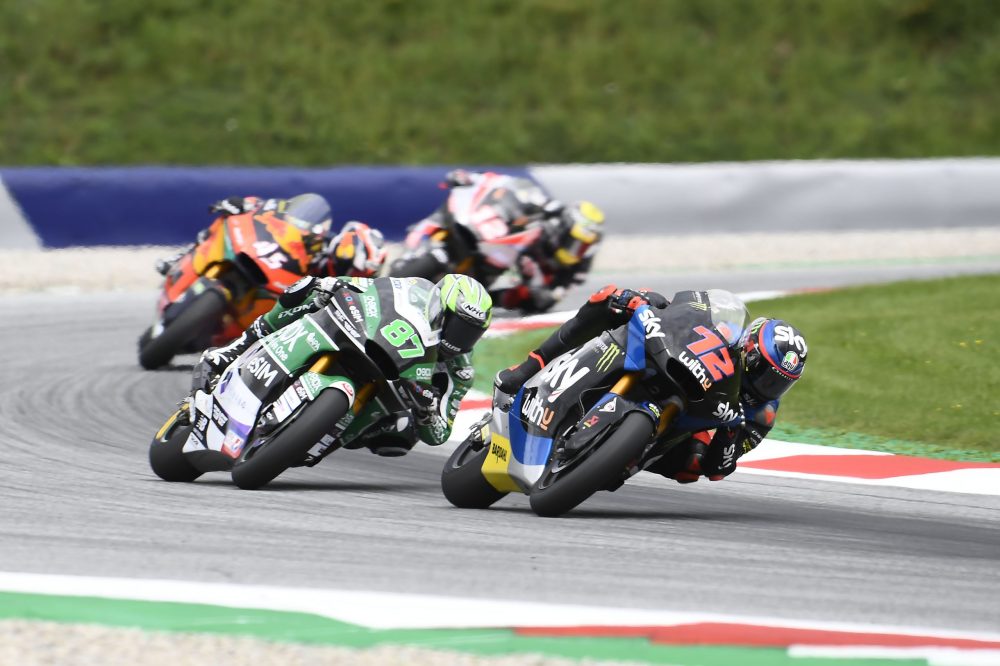 “I knew in the last lap I didn’t have the confidence to pass in braking,” said Bezzecchi. “I tried to push him and maybe he’d make a mistake. I saw him touch a little the green. I was back at the beginning and recovered many positions.”

Gardner put the disappointment of crashing out of third place one week before behind him to ride to a gallant third, just 1.027s behind. Despite losing time on the straights in sectors one and two, the Australian took a deserved second podium finish in the class. 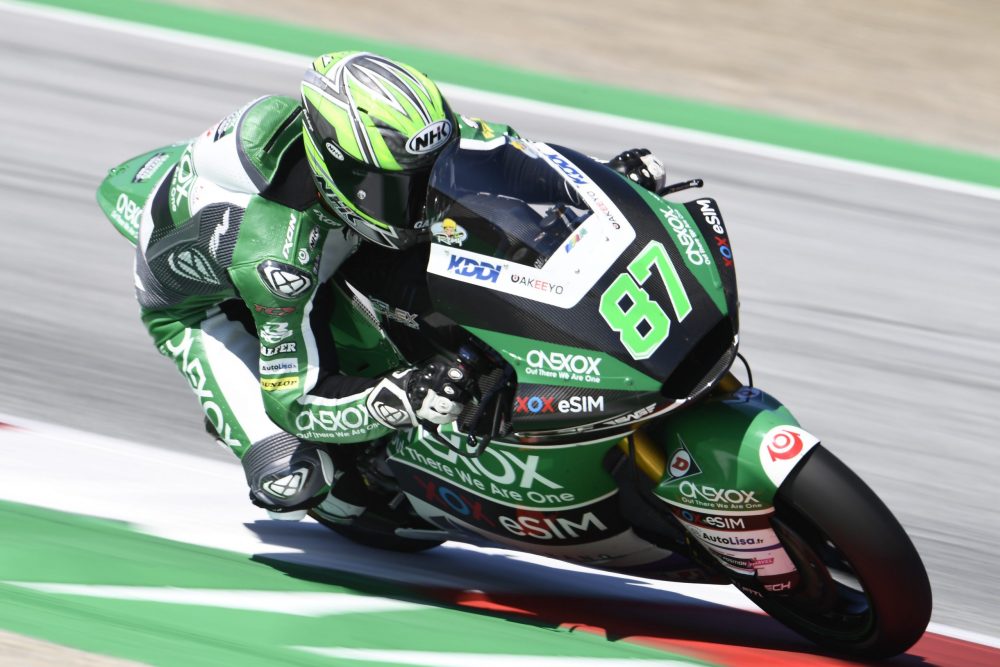 Just 3.2 seconds covered the top five with Tetsuta Nagashima (Ajo KTM Kalex) and Thomas Luthi (Intact GP Kalex) both recovering from their respective recent woes to just stay within touch of the leaders without getting close enough for pounce. Xavi Vierge (Petronas Sprinta Kalex) fought through from 19th on the grid to finish an excellent sixth, while championship leader Luca Marini (Sky Racing VR46 Kalex) was left to ponder another poor qualifying performance as he struggled to seventh. Englishman Jake Dixon (Petronas Sprinta Kalex) rode to his best ever result in the eighth.

Remy Gardner: “Last week it was painful to accept my mistake. We struggle a little with the straights here but even so we make up for it in the braking zones. From Brno we all put out heads together because we were down on top speed. We had a new engine here and we were still a bit down but in the third and fourth sector I was able to make up the time I was losing in acceleration. I think it’s something to do with my weight because I’m a big boy! We need to study the data some more and come up with some solutions because I need some help!”

The championship has closed up as a result. Marini (87 points) now has eight points in hand over Enea Bastianini (Italtrans Kalex) and Martin, both tied on 79. Nagashima (68) and Bezzecchi (65) can still count themselves in the title fight, 19 and 22 points behind respectively. 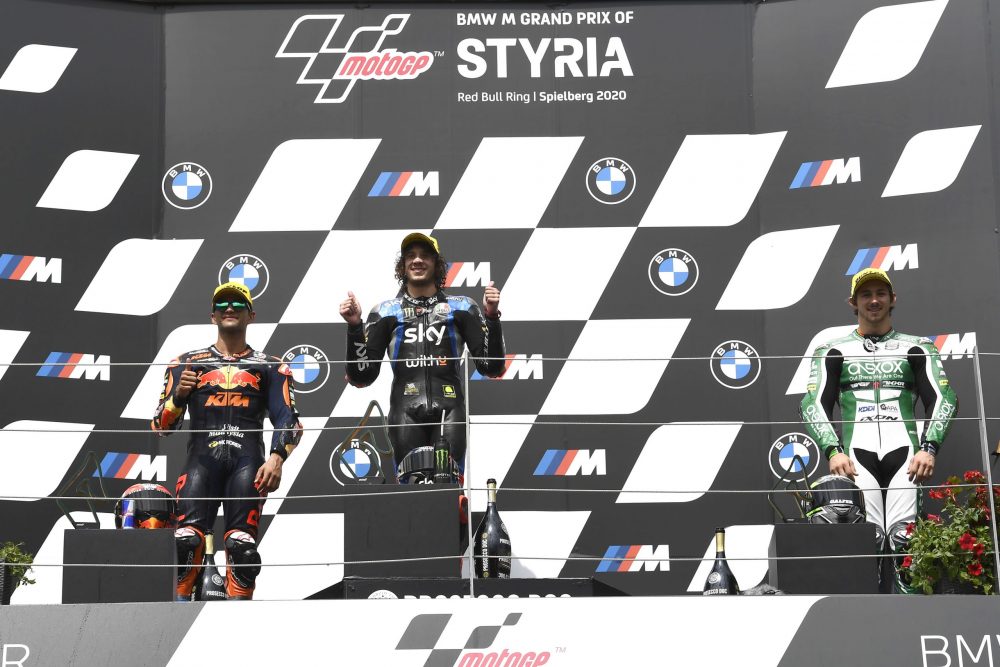