Remy Gardner has won the Moto2 World Championship for Red Bull KTM Ajo after taking 10th position at Valencia, Spain and round eighteen of eighteen in 2021 MotoGP. Teammate Raul Fernandez claimed the final round and classified runner-up in his rookie season.

Remy Gardner rode to 10th position at a sunny Ricardo Tormo Circuit for the Gran Premio Motul de la Comunitat Valenciana and delivered his first world championship after six seasons learning his trade in the tight and competitive Moto2. The Australian completed a nervy race that had been red-flagged early on and shortened due to an oil spillage on the track. Teammate Raul Fernandez sprinted to the checkered flag and the points difference between the two was just four by the end. 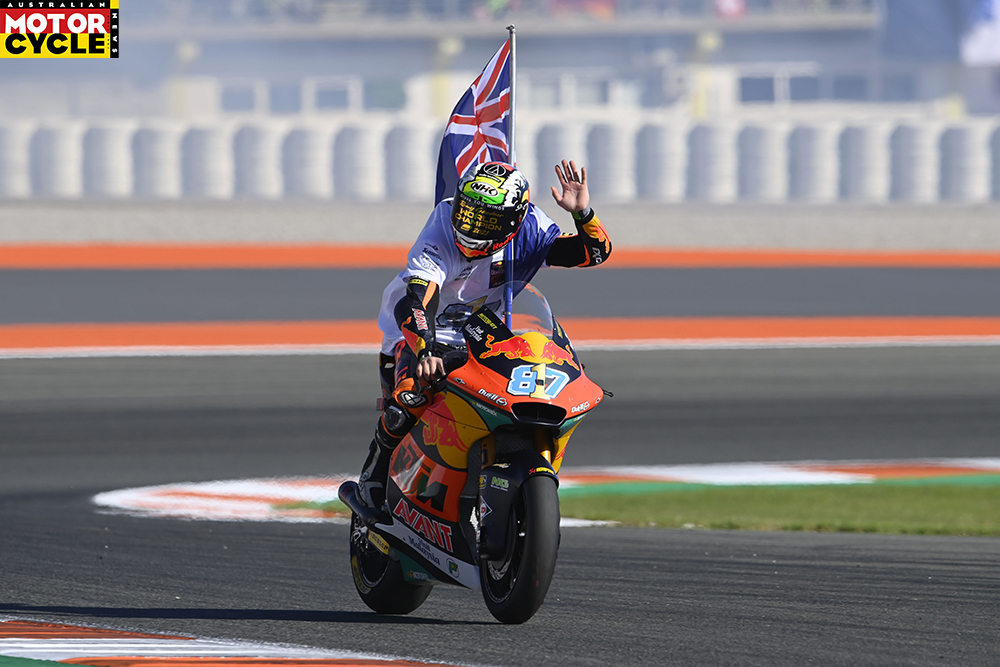 Gardner moved up from 15th to 6th and now to 1st in his last three Moto2 campaigns. He joined the Red Bull KTM Ajo team for 2021 for the final surge of performance to make a push for the title. He gathered 12 podiums through a consistent term that included five wins in Italy, Catalunya, Germany, Great Britain and Portugal. He captured three consecutive trophies in his first three races for the team in Qatar and Portugal. 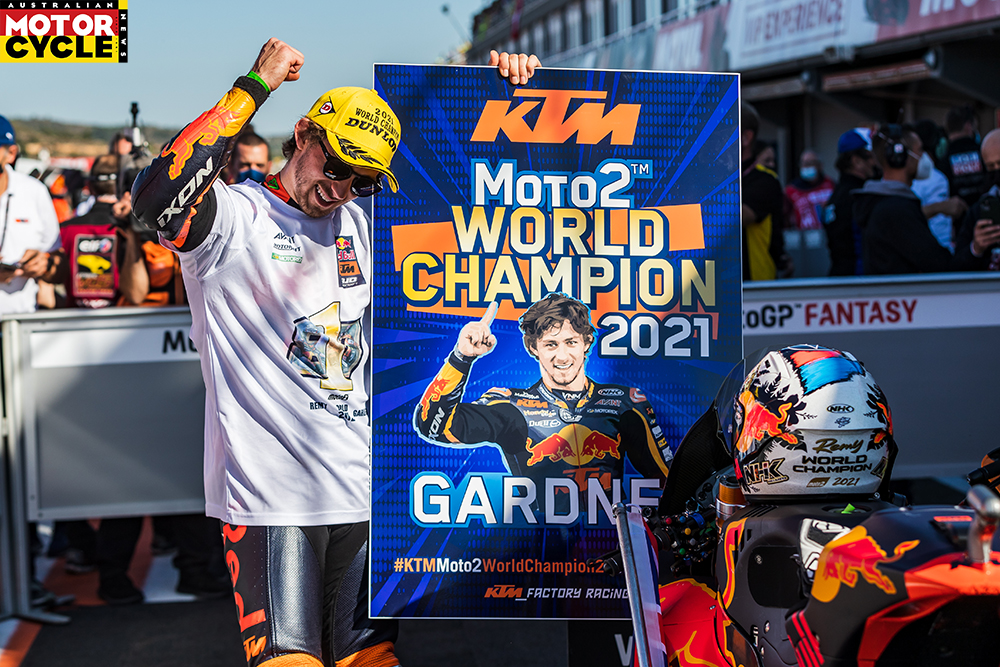 Fernandez won eight Grands Prix and gathered 12 podiums. The rookie first triumphed at the Portuguese Grand Prix earlier this year, which was his first accolade in the class. He subsequently added another seven wins and three more rostrums to take the title dispute to the wire. 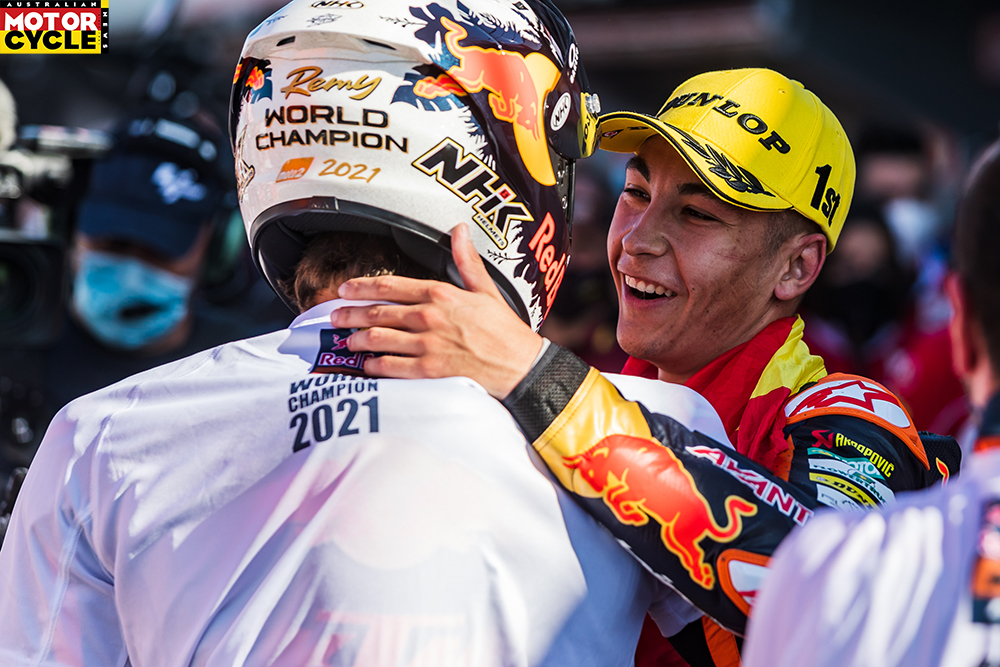 From 18 rounds Red Bull KTM Ajo finished 1-2 on the rostrum seven times. An Ajo bike was missing from a Moto2 celebration on only three occasions. Both Gardner and Fernandez’s next challenge will be 2022 MotoGP with the Tech3 KTM Factory Racing team. 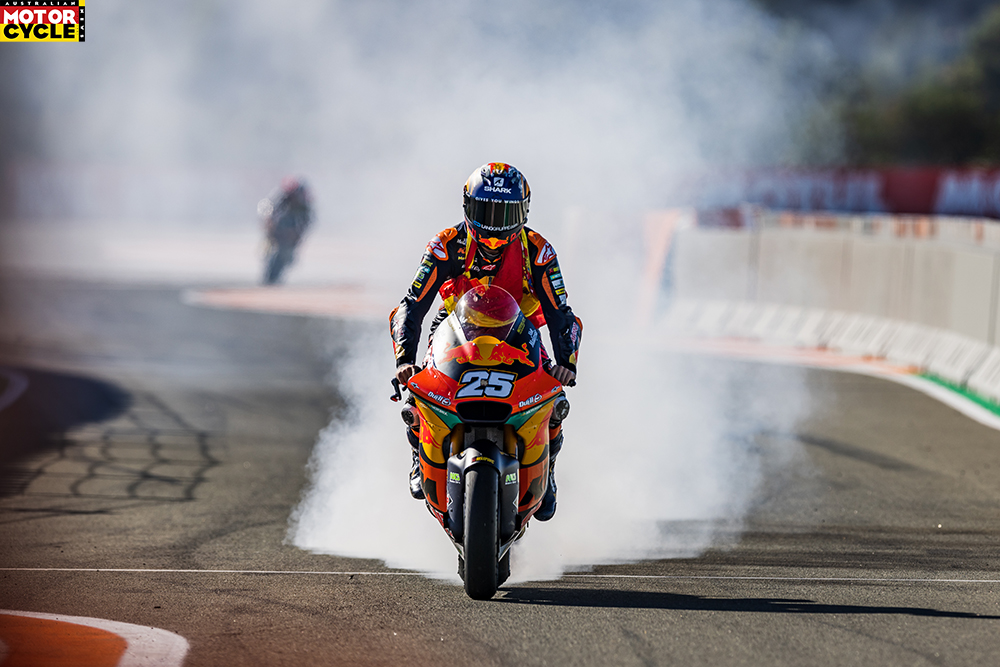 Remy Gardner: “I’m lost for words. After so many years of suffering and so many points in my career where I thought ‘I’m not good enough, I’m not gonna make it we did it. This is a dream come true and I want to thank everyone who believed in me when others didn’t. I still cannot believe this has happened. I am so grateful to be here.”

Raul Fernandez: “I’m really happy with my race and I did what I could to try and win the championship. It wasn’t lost here but in other races. Anyway, it has been a fantastic season thanks to an incredible team behind me. We won eight races and set a record for my first year in Moto2. I have a strange feeling now: I won today but not the championship but I’m still very happy.”

Aki Ajo: “In both categories, this season has been incredible. On the other hand, I have to remind myself that this is part of the work: the result of that is the improvements we can see, and we can still make. It is always a pleasure to go through that process. It’s an emotional moment. Remy did it today and Raul had a great race; like for every rider, we just tried to help them take out the maximum of their potential. It’s important to draw out the best of everything around you in racing while also keeping it simple.”

Pit Beirer, KTM Motorsports Director: “It’s a great moment. Winning the title in Moto3 and then watching these boys in Moto2 – and knowing they are moving up to MotoGP – I feel like our foundation for the future is set. This year has been another milestone. It’s crazy what Red Bull KTM Ajo did this season and we’re looking forward to 2022 already.”