After its Castrol Six-Hour race win in October 1978, the Team Avon Yamaha XS1100 perhaps surprisingly didn’t end up in the factory museum in Japan, or even the showroom floor of the NSW distributor McCulloch Yamaha who’d supplied it new to Team Avon.

Instead, by now road registered, it was sold to Team Avon volunteer Graeme Hadley who’d been one of the pit crew for its Amaroo Park victory. He took delivery of it in April 1979 and used it for commuting and touring, clocking up 35,000km until 1989, when it was garaged after a couple of minor accidents.

Graeme sadly passed away during a business trip to Japan in December of 1994 and his widow Debbie sold the XS1100 to Sydney fireman Bruce Loy two years later. Bruce brushed the cobwebs off and started using the Yamaha as his daily ride until in May 2007 he was tracked down by Mal Pitman, who wanted to restore a Castrol Six-Hour bike. By then, Bruce was looking for a lighter shaft-driven bike, so agreed a straight swap for a more recent XJ650. The two met up in Central NSW, halfway between Adelaide and Sydney to exchange the bikes, and now with 68,856km on the speedo and very much due for a makeover, the race-winning Yamaha XS1100 headed to South Australia to be restored to its former glory.

“I knew it was the genuine bike from the engine and frame numbers, but soon as I got it home and started to strip it, I found all the tell-tale signs that said it had been a racer,” says Mal Pitman. “The drain plugs and fillers still had the drill holes in them for wire locking, and various nuts were also drilled for wiring. The footrest brackets showed wear signs from where we put our number plate mountings, and when I removed the tail light bracket a SIDI sponsorship sticker was still beneath it, plus the fuel cap still had an Avon Tyres laurel wreath sticker on it. I stripped it completely and rebuilt it from the ground up, but I wanted to only fit original parts, so it took me seven years to get the job done.”

“I finished it in April 2014, and did around 600km to run in the engine through the Adelaide Hills. It ran beautifully, so I took it to the Broadford Bonanza, which that year hosted the Castrol Six-Hour Revival, and [Team Avon owner] Lindsay Walker was there to join in the trip down memory lane.”

Since that single appearance when it was once again ridden on track in something approaching anger, the Avon Yamaha has been sold to Motorcycling Australia to join the many competition bikes with an Australian heritage in its collection. It’s presently on loan to the Bathurst circuit museum. 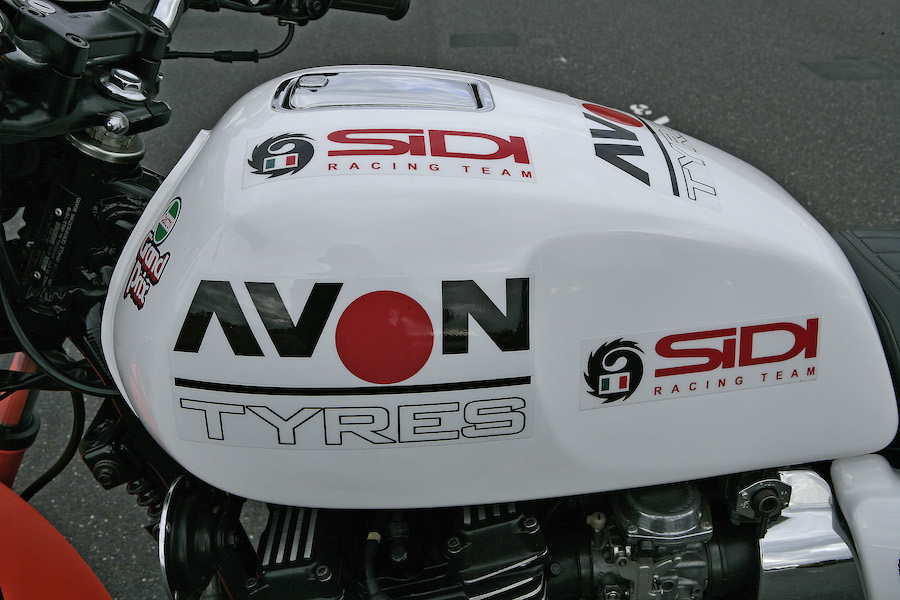 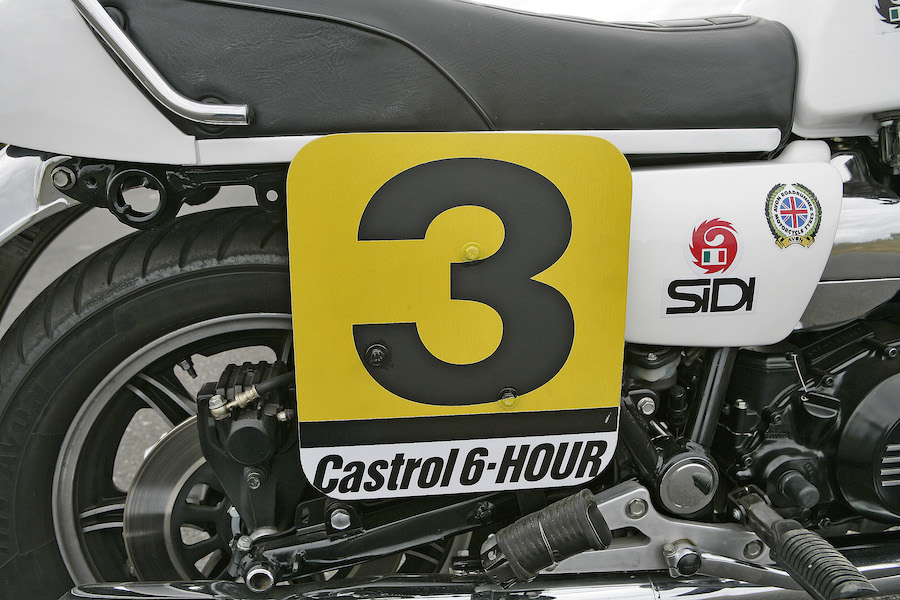 Before then, I rode Pitman’s freshly-restored piece of Australian history on the switchback Broadford circuit just north of Melbourne, which at 2.16km in length, is uncannily similar to Amaroo Park where this Yamaha did the business 40 years ago.

Moreover, it comes complete with a couple of off-camber bends – especially the second-gear final turn leading on to the straight – which are potential sink holes for a shaftie like this. I gave myself a serious pep talk before sliding aboard the Yamaha’s plushy upholstered but rather wide 810mm high seat: make sure you have your line right before committing to a turn, complete your braking before turning in, accelerate rather than trailbrake into the apex, and above all be smooth. No worries, mate.

Still, Mal Pitman’s good-as-new freshly restored XS1100 was a pretty eye-opening ride for a 40-year old bike. Okay, with that rangy steering geometry (the 37mm Kayaba fork sits at a 29.5º head angle, with 130mm of trail) and especially the long, touring-friendly 1545mm wheelbase, it required serious physical effort to flick the Yamaha from side to side through the downhill Esses, not helped by the hefty 256kg dry weight (278kg with a fuel 24-litre fuel load). It says a lot for the diminutive Greg Pretty that he became so dominant in long-distance production racing on such a hefty motorcycle.

But the Yamaha didn’t feel as top-heavy as other such Japanese fours of the era, so having the weight lower down made it easier to steer, and above all also helped it ride bumps better even with that minimal 80mm of rear-wheel travel from the stock Kayaba shocks. Plus, the wide, fairly high, US market-friendly handlebar helping me lug a bike that, if anything, was too stable in turns through the Broadford twisties. 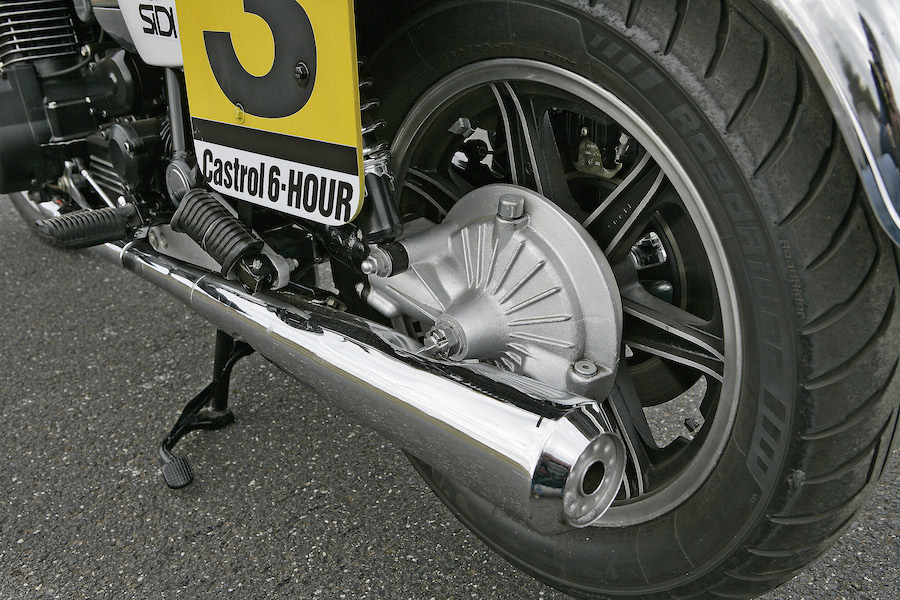 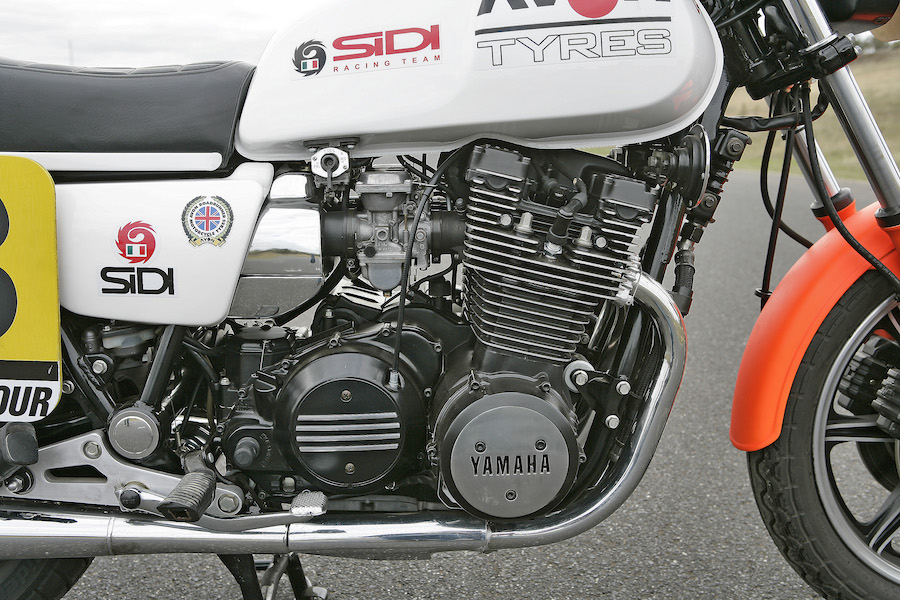 It drove dead straight descending the circuit’s staircase main straight, even after pulling an inevitable wheelie hard on in fourth gear over the last big step halfway along. Just as well, since Castrol Six-Hour rules forbade the fitting of a steering damper even on the grounds of safety, so if your bike was a shaker – and many of them were – too bad, hang on!

Not the Yamaha, which remained stable under hard acceleration, even with the front wheel lightened under the 90Nm of torque at 6,500rpm – impressive numbers for the era.

And that’s the key – the enormous grunt from its meaty, muscular motor which comes at the issue of performance from the diametrically opposite direction of its six-cylinder Honda CBX1300 contemporary. The Yamaha’s almost square 71.5 x 68.6mm dimensions delivered big, chunky cylinders, and fewer of them, compared to the high-revving shorter-stroke Honda, and that made the Yamaha a slugger rather than a screamer. It meant fewer gear changes and a less-tiring approach to going fast.