The MV Agusta Brutale 800RR is the alpha male of the middleweight nakedbike class. Its inline three-cylinder DOHC engine has 798cc, not the largest on test – that honour goes to the 799cc KTM – but it is by far the most powerful, pumping out 103kW and 87Nm.

Almost everything about the Brutale 800 RR is bigger, better or more brutish. The price tag is certainly bigger, setting you back $23,490 (plus on-road costs).

For your investment though, you get the good stuff like gorgeous forged and machined aluminium wheels, a single-sided swingarm, a fully adjustable 43mm upside-down Marzocchi fork with a fully adjustable Sachs rear shock to match, adjustable steering camper, bi-directional quickshifter, a sweet hydraulically operated slipper clutch and radial-mounted Brembo brakes controlled by Bosch 9 ABS. You also receive MV’s signature stacked triple tailpipes which emit a sound which makes a mockery of the Euro4 testing procedure. But it’s in the looks department where this bike really excels. It was funny to watch members of the test team approach the Brutale and run their hands over its flowing lines. To absorb something that looks so beautiful you need to touch it. “It’s not just like a woman,” laughed Matt. “It’s like a cross-fit woman!”

The Brutale’s frame is a tubular-steel trellis design and, like other manufacturers, MV has made the lines of the trellis part of the design, it has not been scared to be bold. The bright-red frame contrasts with the whites and blacks and reds used in the paint scheme – it’s beautiful. The use of an LCD dash instead of the much more modern full-colour TFT style was noted, and its suite of electronics isn’t bolstered by an IMU, both of which adorn the $15K KTM. It does have on-board diagnostics, but for $23K, it’s hard not to expect the latest of everything. 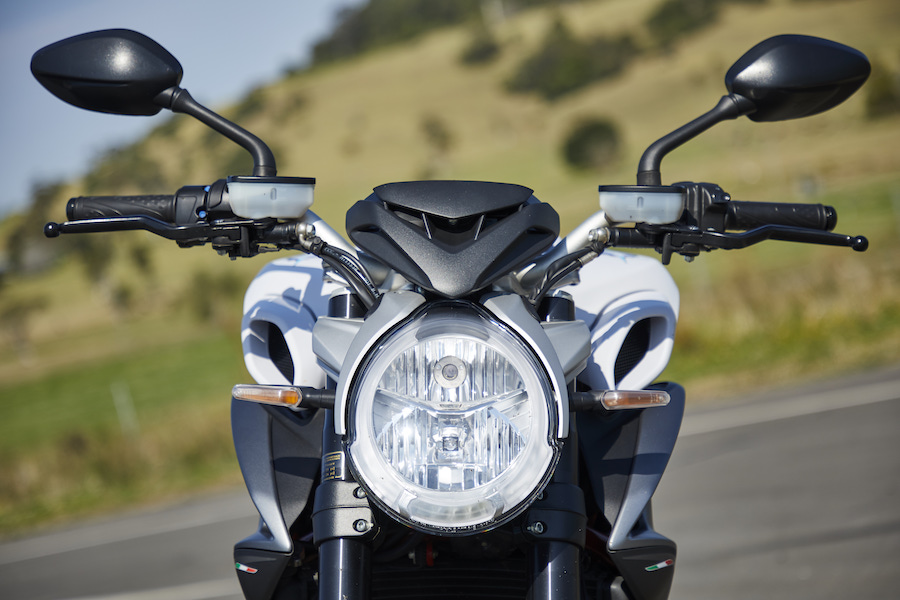 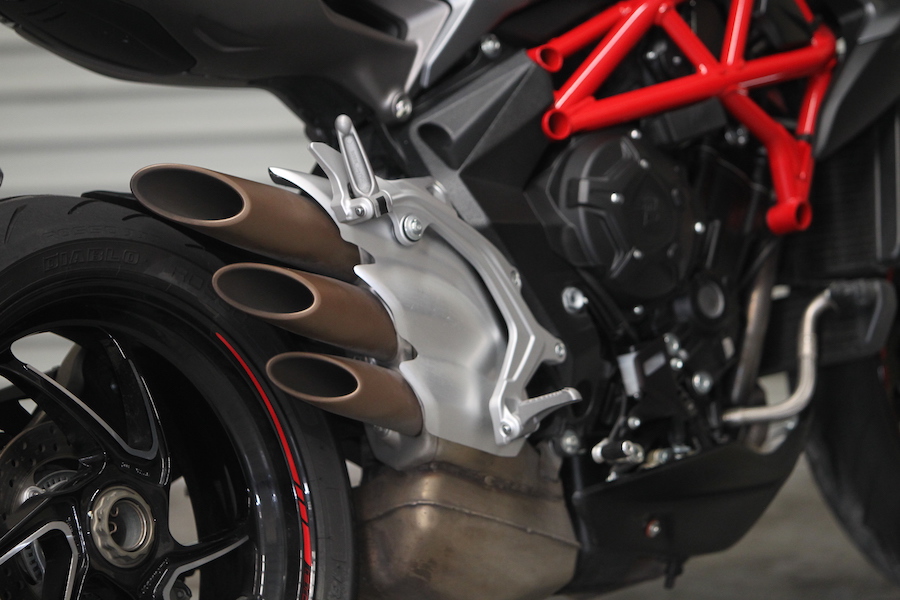 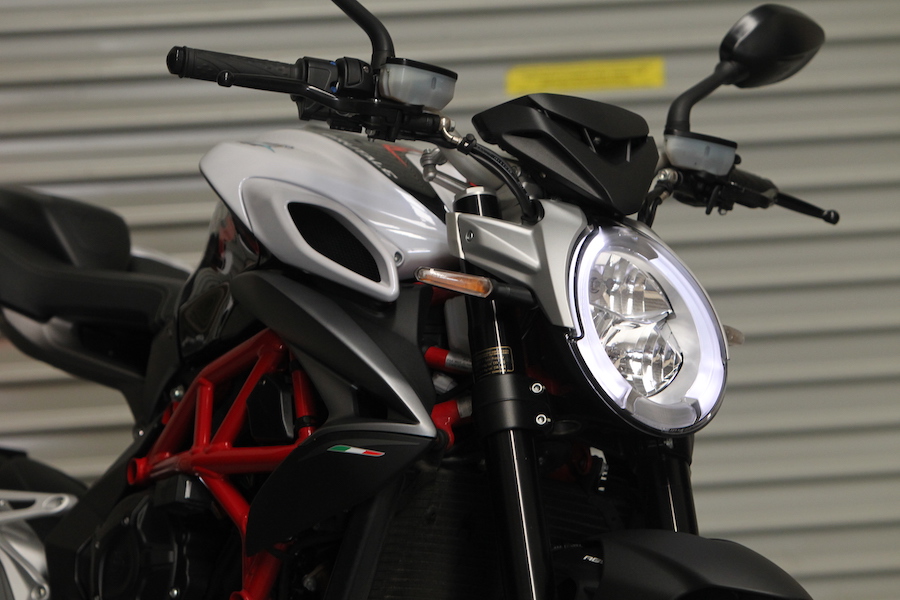 What the electronics do have is four selectable engine modes; Normal (now there’s an oxymoron), Rain, Sport and Custom. Custom mode is where the rider can get stuck into changing all sorts of parameters, including the eight-level traction control, engine braking, throttle sensitivity, torque, rev limit and much more. It would be easy to begin playing with the electronics and run out of time for a ride. Turn all the electronic safety nets down a bit (or if you are highly skilled, and brave, turn them off), and give the throttle a good twist. The result will be a tightening of the buttocks as it attempts to grab the seat, followed by an appreciation of how well the electronics keep this bike in check.

While the Brutale’s dash is due for a TFT upgrade, the test team didn’t have an issue with the layout of the information. Changing riding modes via a single button is easy enough, but working out how to delve into the setting to change the vast array of adjustable electronics stuff stumped a few. 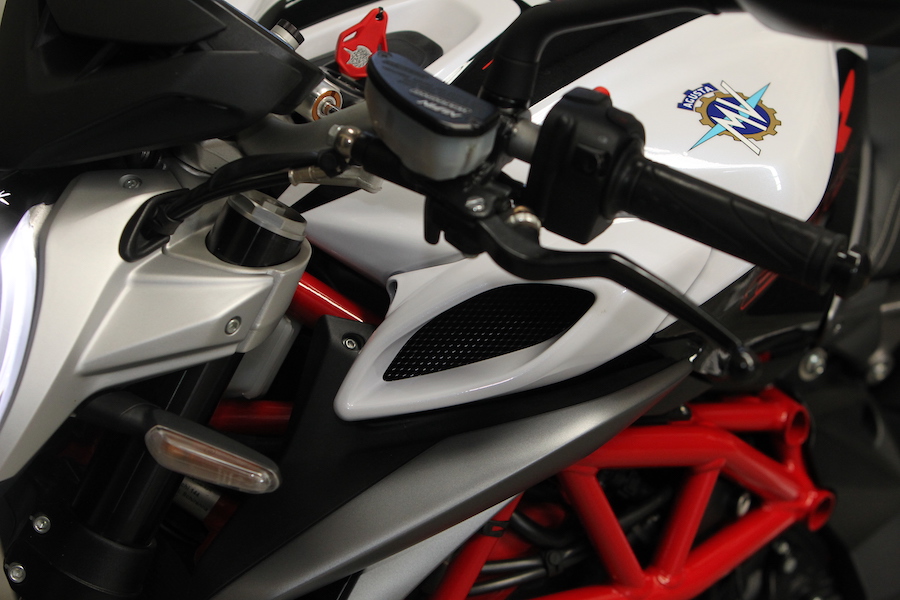 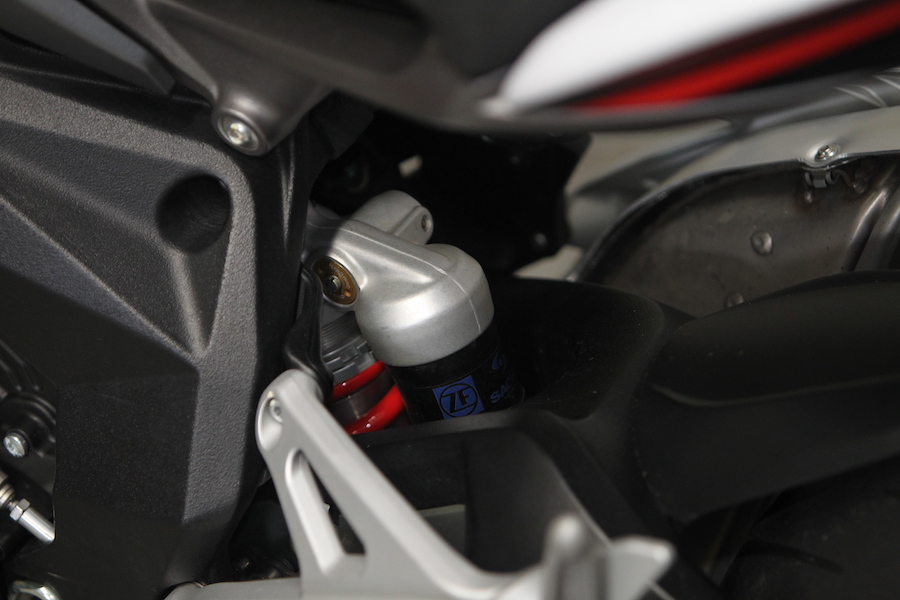 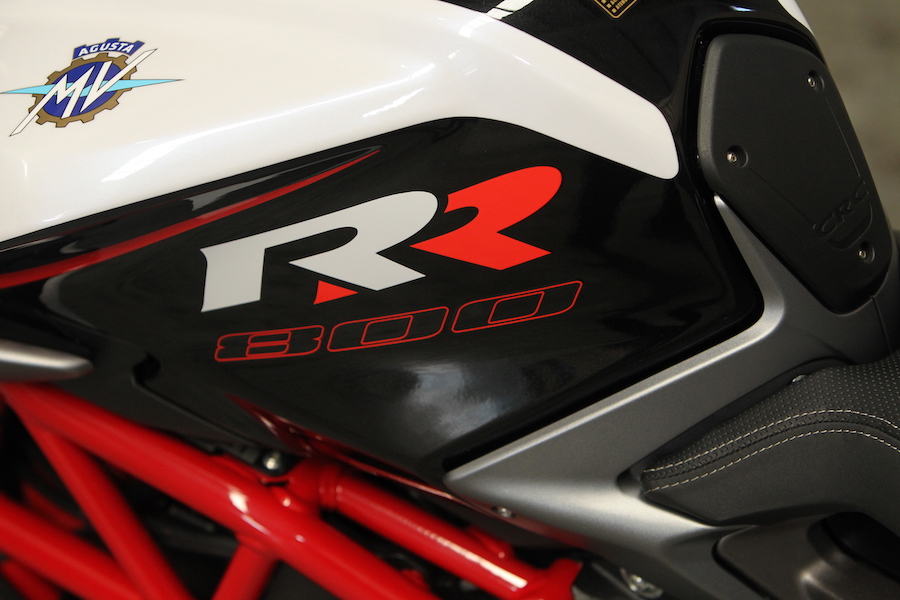 The Brutale’s three-cylinder engine features a counter-rotating crankshaft, harnessing all that grunt would have been quite a challenge for the engineers especially with the Brutale’s short  1400mm wheelbase.

Riding the Brutale along a straight, bumpy road may have made no sense to any of the test rider, but as soon as the bitumen began to get its fun on, the MV played its hand. With 103kW and 87Nm it leaves everything else on test in its mirrors, and the sweet-handling chassis is well matched to the power output.

It’s a sportsbike with a rational riding position. All of these other bikes,( Suzuki SV650X, Honda’s CB650F, Kawasaki’s Z650L ,Yamaha’s MT-07 HO , Ducati Monster 659) and KTM 790 Duke ) are designed with some commuting in mind, but the Brutale is a straight-out performance machine – it’s power and handling are superb. While $23.5K is a lot of money, the performance is on par with a higher-capacity bike.” 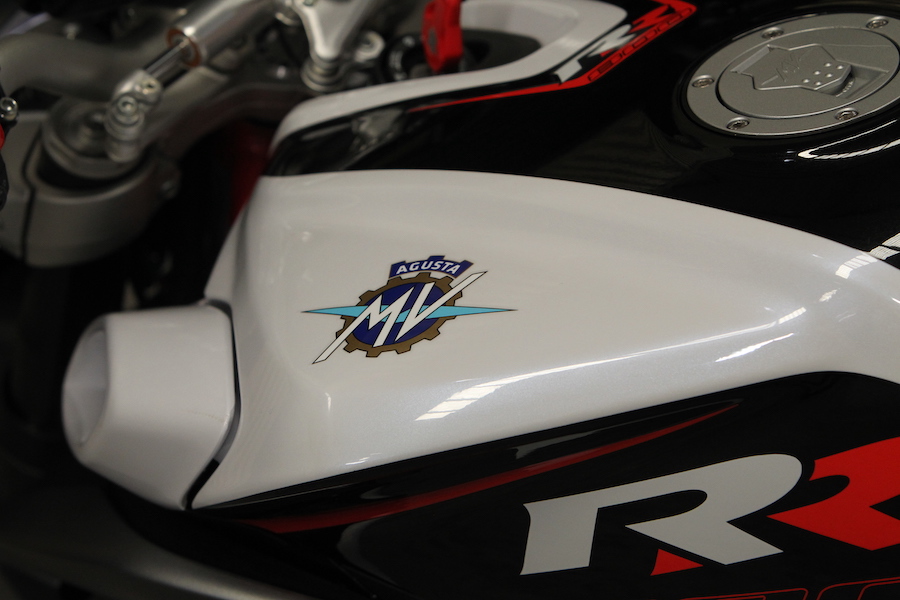 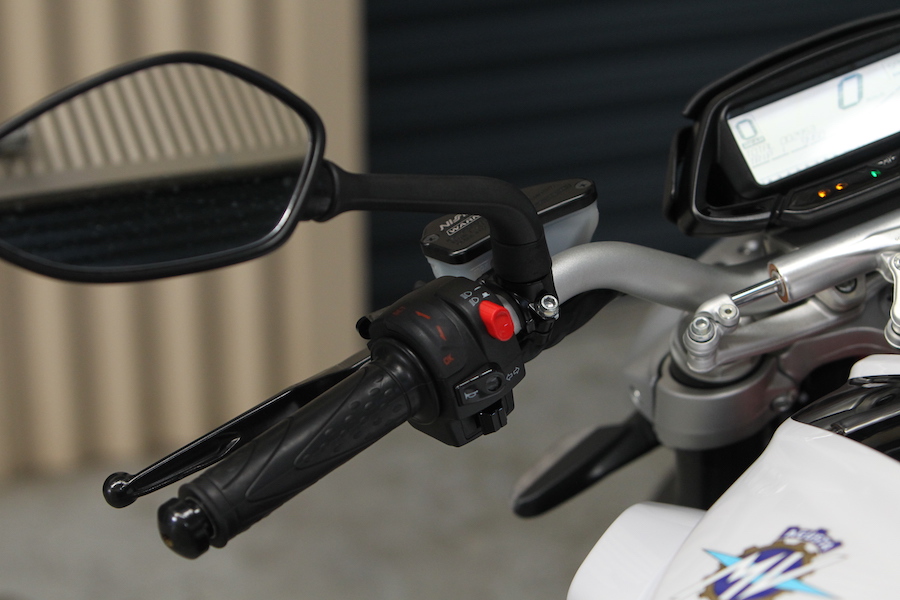 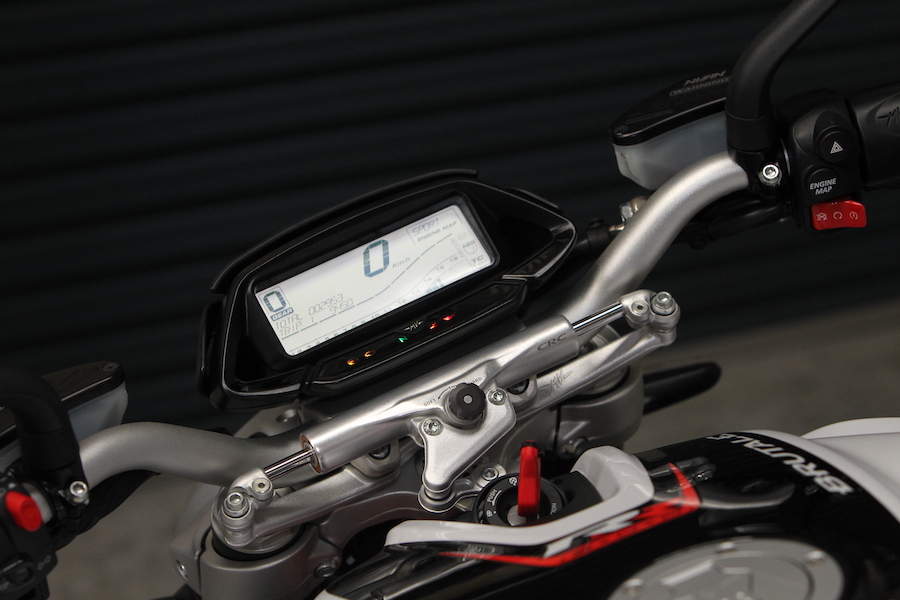 Despite the qualms about its hard seat, as we mounted for the final leg of our long two-day ride, there was a race for the Brutale keys – it’s that sort of machine.

Just looking at this bike makes me want to ride it. It’s without doubt one of the few machines that make you stop, stare and think ‘what a great looking machine’. When you hit the starter, it fires into life with the unmistakeable tone of a thoroughbred triple. It has plenty of leg room, an aggressive riding position, yet it’s not hard on your wrists over a long-distance tour of the hills. The good factory suspension setup inspires immediate confidence; something I rarely find from production bikes. The Brutale’s 798cc engine is a brilliant balance of peaky power yet it doesn’t overwhelm the nimble chassis with excessive torque.

It has a lot of impressive qualities, but the production line must have missed the memo about seat comfort – it’s as though they ran out of padding. The dash lacked the same style and passion the rest of the bike received. It was complicated to use and the integrated indicator lights were all but invisible. These things aren’t deal breakers by any stretch, and every time I rode it, I got that exotic European feel of riding something that made me feel excited to open the throttle, and that’s more than enough to eclipse those little concerns. It’s an impressive bike, it has a few downsides, but the core values of a real performer are there in abundance. 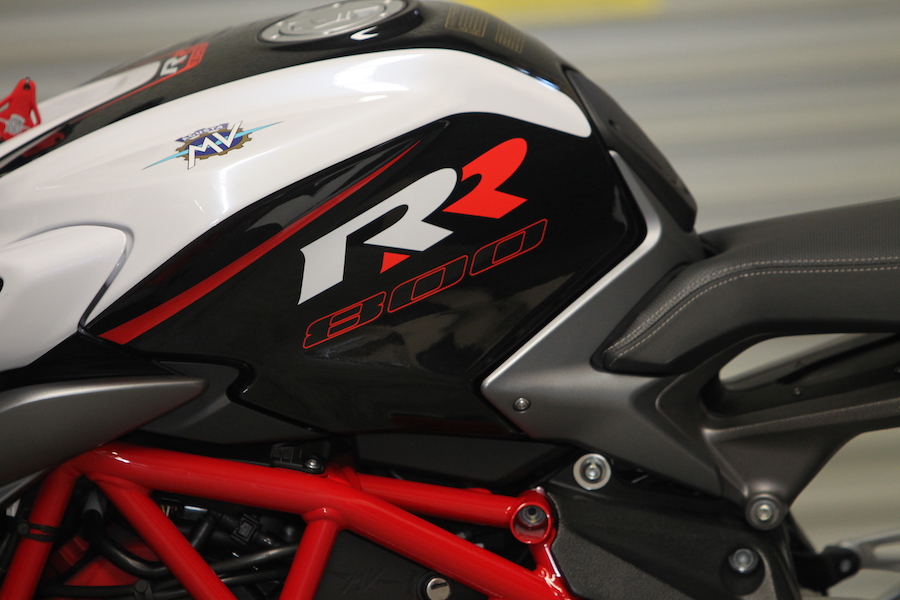 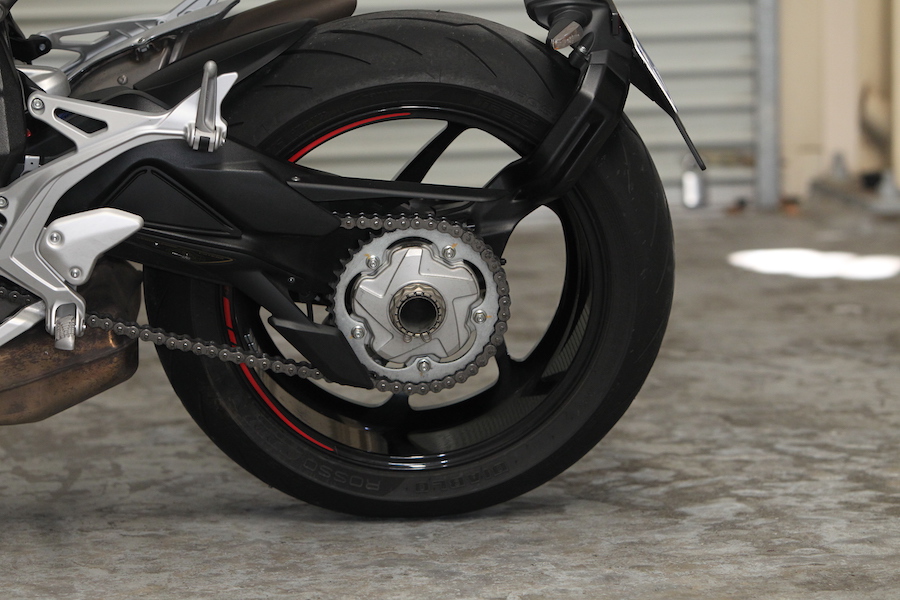 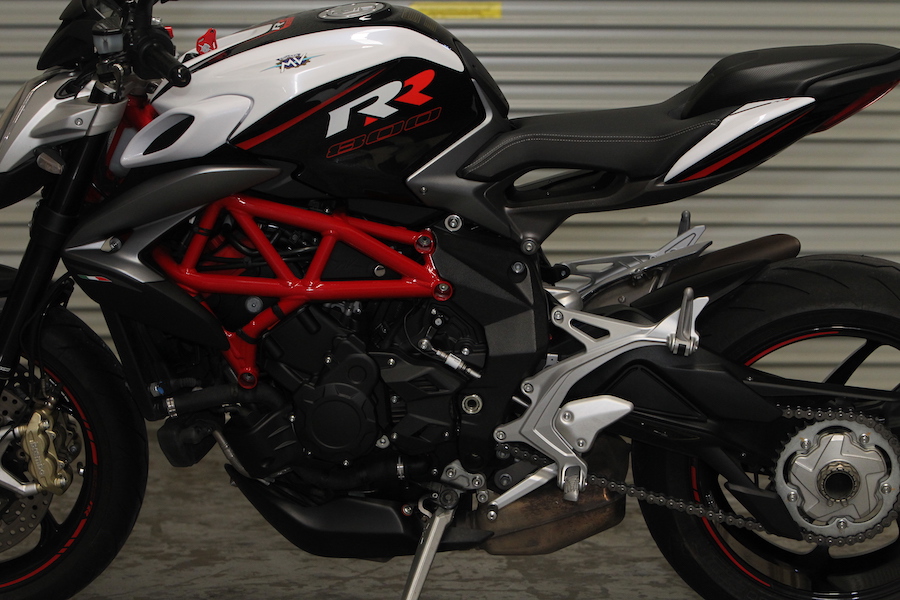 A motorcycle that oozes Italian sex appeal and feels like it has been lovingly handmade, yet with the build quality and attention to detail MVs of old sometimes lacked.

Somewhere during the Brutale’s development, someone rode the bike and declared the seat comfort suitable. That person should be hunted down, then drawn and quartered. I know I said we like to spoil ourselves, but the RR is the middle of the road in the 800 lineup. There’s the standard 800, this RR and the WSBK-liveried Reparto Corse RC model.