The beast charges through for victory in round 4 of the MotoGP championship in Austin, Texas

Austin would always be the ultimate test of the weird and wonderful start to this year’s MotoGP season. If a track infamous for its predictability over the years could throw up a surprise, then this year’s championship really is wide open. The Circuit of the Americas duly obliged as Enea Bastianini (Gresini Ducati) showed his early season success in Qatar was no fluke. On a weekend in which the silly season rumour mill went into overdrive, here was his reminder for the watching factory bosses. 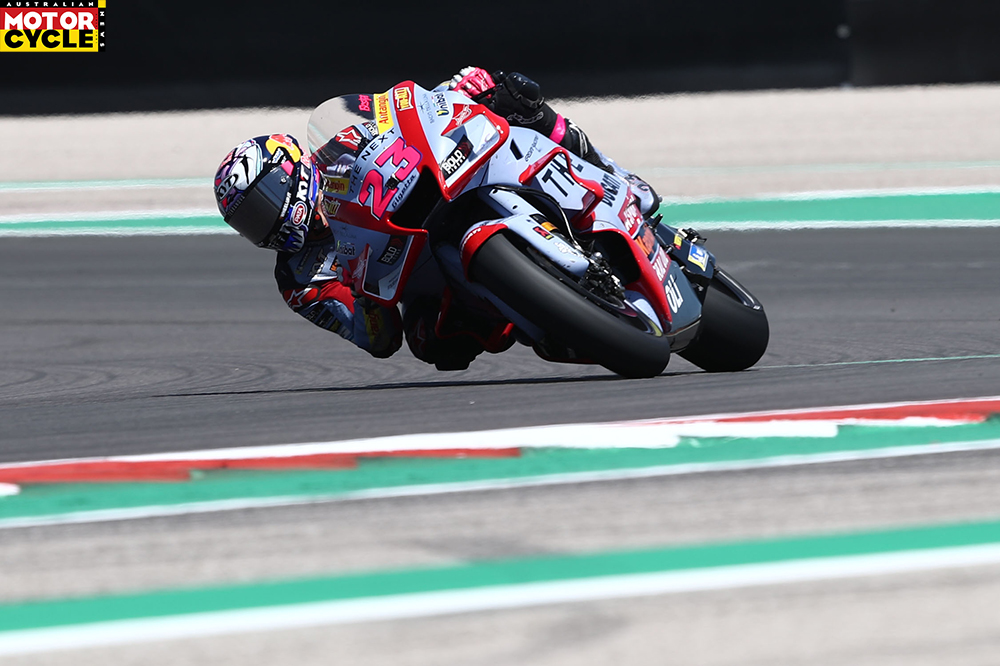 Around a track that has routinely served up dull racing in the premier class, the MotoGP event was a cracker in keeping with recent events. That was partly due to a “technical issue” for Marc Marquez (Repsol Honda) – the man who won seven of the previous eight encounters here – off the line. In yet another injury comeback, the 29-year old fought back from last place to claim a gallant sixth. 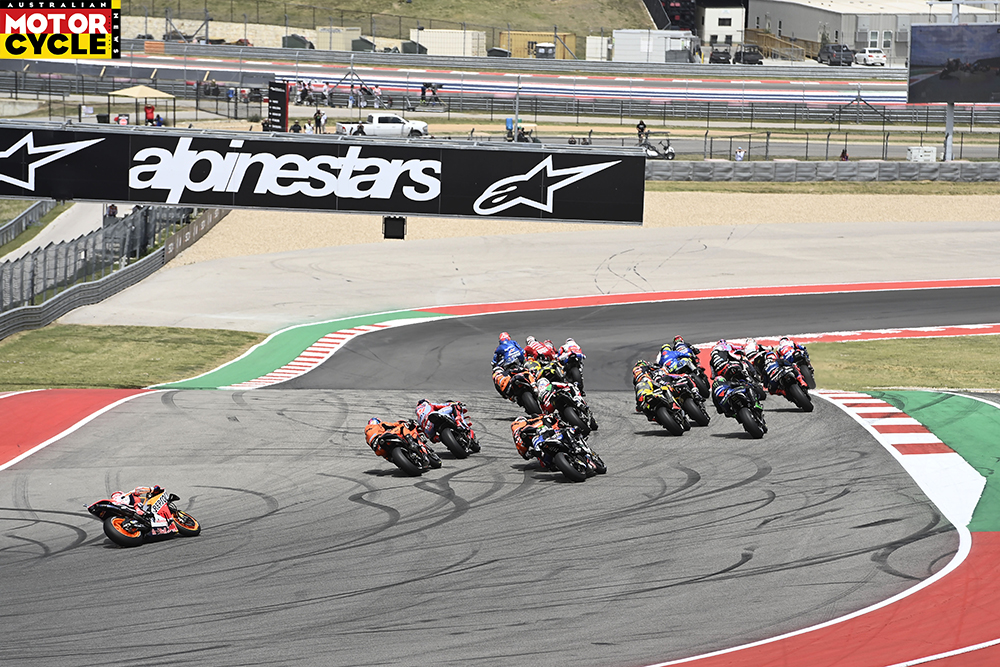 But not even the man known as the King of COTA was the star here. Bastianini retook the championship lead courtesy of his most assured grand prix performance to date. Not much phases the 23-year old. His crash out of qualifying on Saturday was met with a simple shrug. He started fifth as Ducati locked out the first five places on the grid for the first time and bided his time early on before “pushing like a bastard” in an unstoppable late-race attack to usurp long-time leader Jack Miller (Lenovo Ducati). 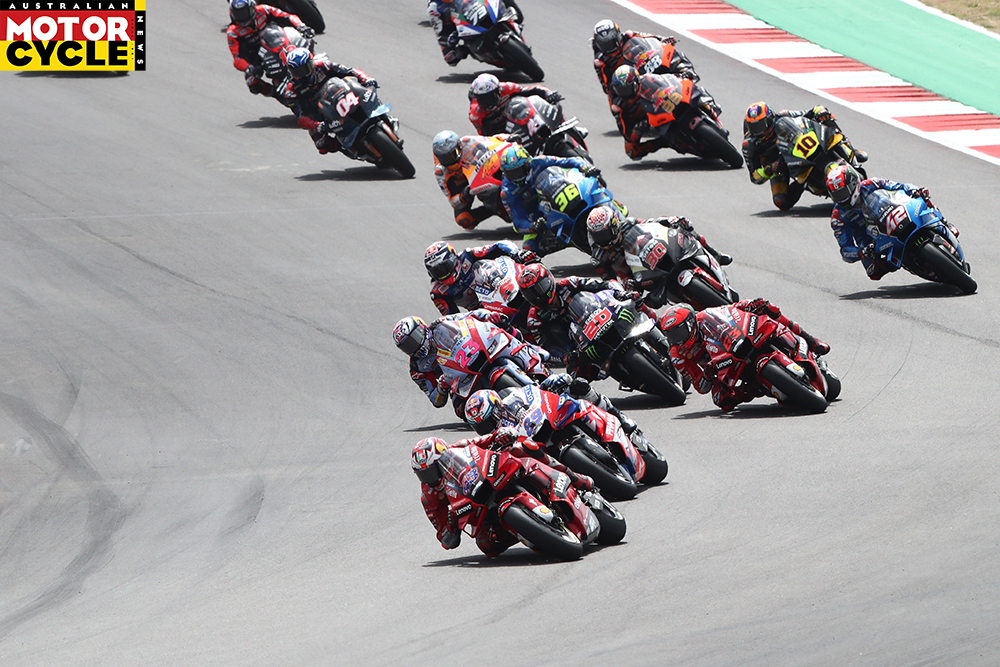 The weekend brought an exhaustive opening of the championship to a close. And while it is still difficult to make sense of the championship – six riders, ranging from Bastianini to Aleix Espargaro (Aprilia Racing) covered by 19 points –, a few patterns have begun to emerge. Namely the competitiveness of Ecstar Suzuki pairing Alex Rins and Joan Mir, with the former’s superb late run resulting in second place here. And on the basis of this showing, Bastianini could well figure toward the front regularly when racing resumes in Europe, while this performance proved only a fool would rule out Marquez. 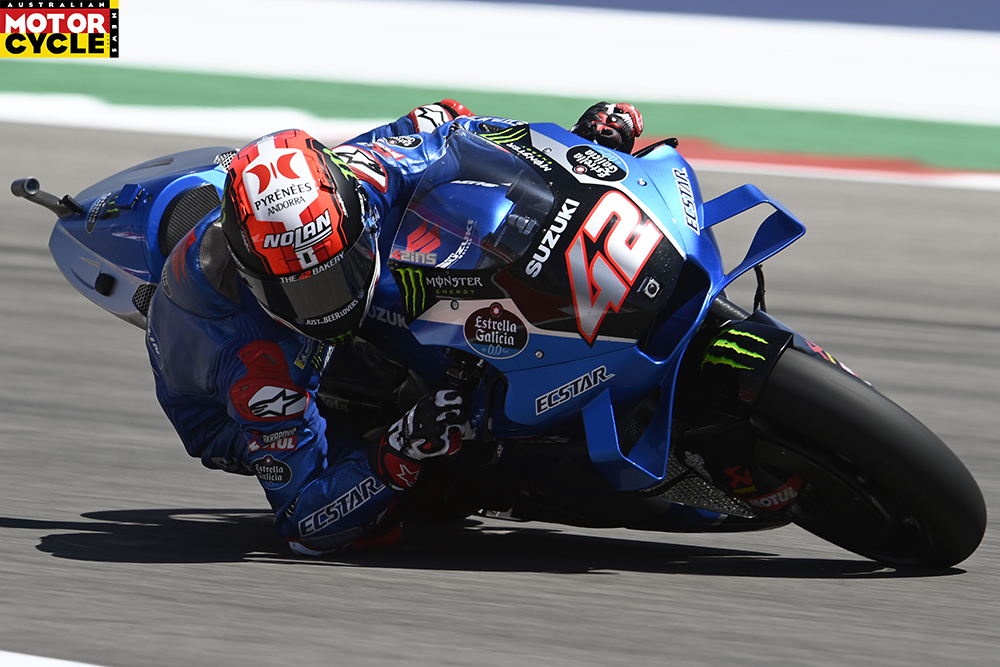 It was a rarity to see a victory fight at this long, technically challenging 5.4km track without the eight-time champ in the mix. Marquez’s race was already complicated by ninth in qualifying, when he admitted to “not believing in myself.” A technical issue, which HRC was investigating at the time of going to press, then saw him get off the line at a snail’s pace. He was dead last exiting the final corner. His all-action comeback was one narrative that lit up this event. 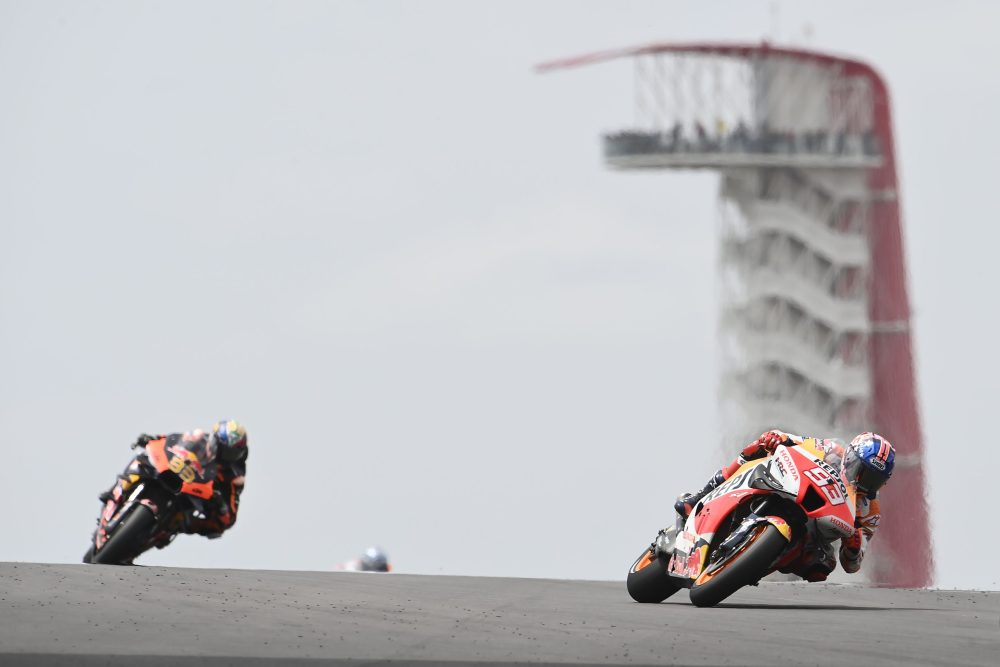 With the #93 just a blip on the horizon, Ducati, and namely Miller, took advantage of their Saturday superiority. A brief disruption from Jorge Martin (Pramac Ducati) aside, the Australian ended the first lap up front, with Francesco Bagnaia (Lenovo Ducati) third and Bastianini fourth. Fabio Quartararo (Monster Energy Yamaha) was initially the only man to get among the red bikes, picking off Johann Zarco (Pramac Ducati) at turn one. The Suzukis hovered menacingly in seventh and eighth ahead of the Espargaro brothers, with Aleix (Aprilia Racing) ninth and Pol (Repsol Honda) tenth. 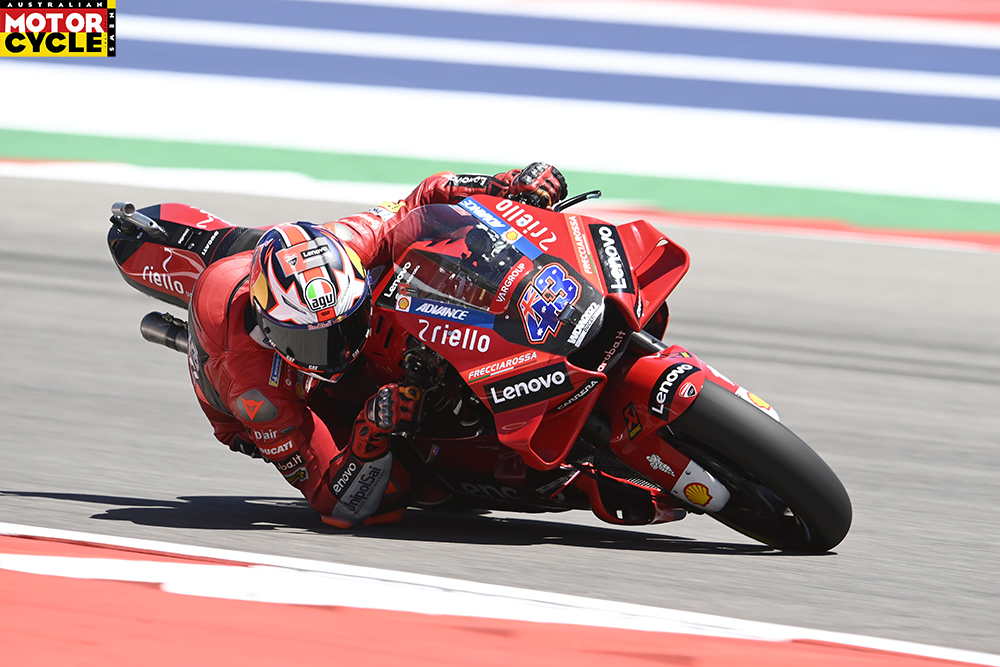 Aside from Miller, who led confidently out front, the other red bikes took turns at showing their full potential. Zarco gave the impression of being the principle menace early on, posting the fastest time on lap three as he got by Quartararo to sit fifth. Two laps on and he was fourth, nipping under Bagnaia at turn one. Then it was the Italian’s turn, as he responded with the fastest lap the eighth time around. All the while, Bastianini was keeping his tyres cool behind Miller and Martin. 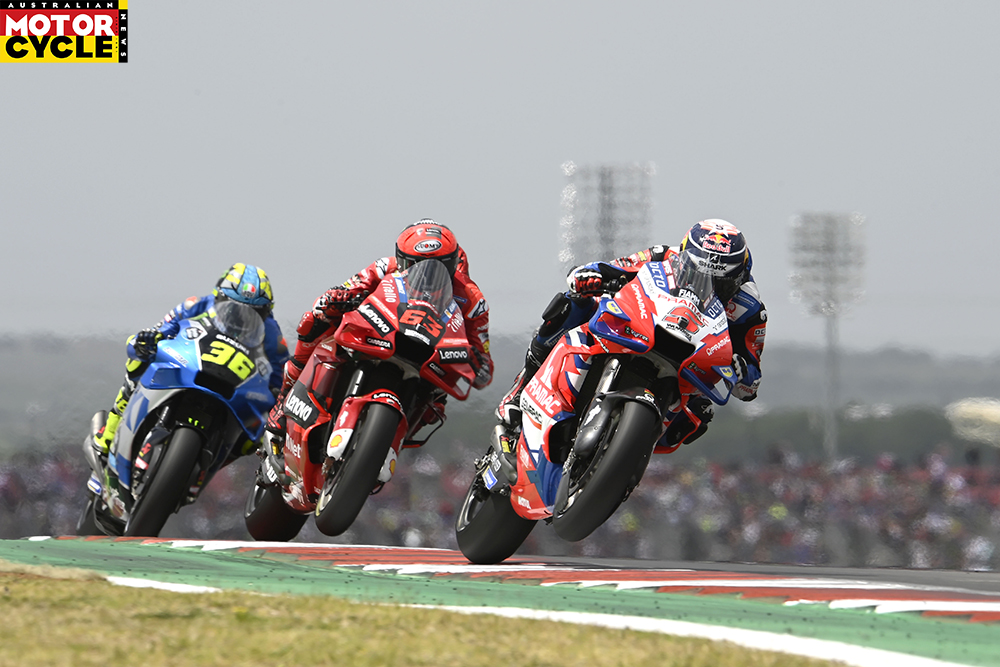 Further back and Zarco’s compatriot was going in the opposite direction. First Rins got by Quartararo (lap three at turn eleven) before Mir deepened his woes on lap six with a neat move on the entry to the first turn. With Franco Morbidelli (Monster Energy Yamaha) and Andrea Dovizioso (RNF Yamaha) contesting 16th, this had the hallmarks of another disastrous day for Yamaha. But the reigning champion’s head never dropped as he clung to the Suzukis ahead. 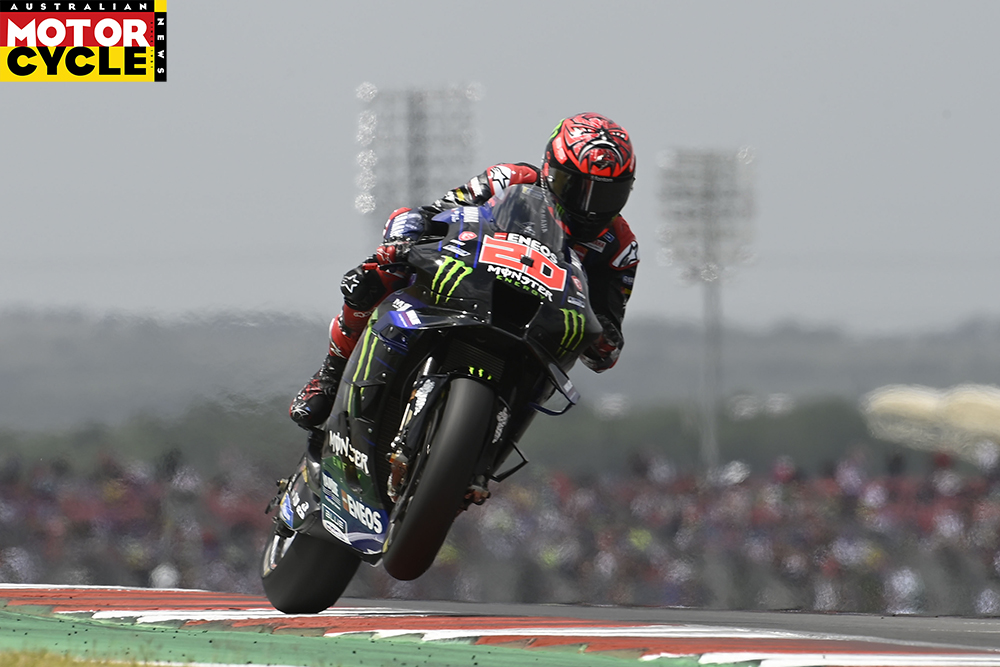 Back in the pack, meanwhile, Marquez was getting stuck in. There were two-in-one moves on brother Alex (LCR Honda) and Marco Bezzecchi (VR46 Ducati) on the first lap, then Brad Binder (Red Bull KTM) and Maverick Viñales (Aprilia Racing) on lap five as he scrambled toward the front. Not even a huge moment over the bumps on the descent from turn ten would slow his pace as he advanced toward the top six. 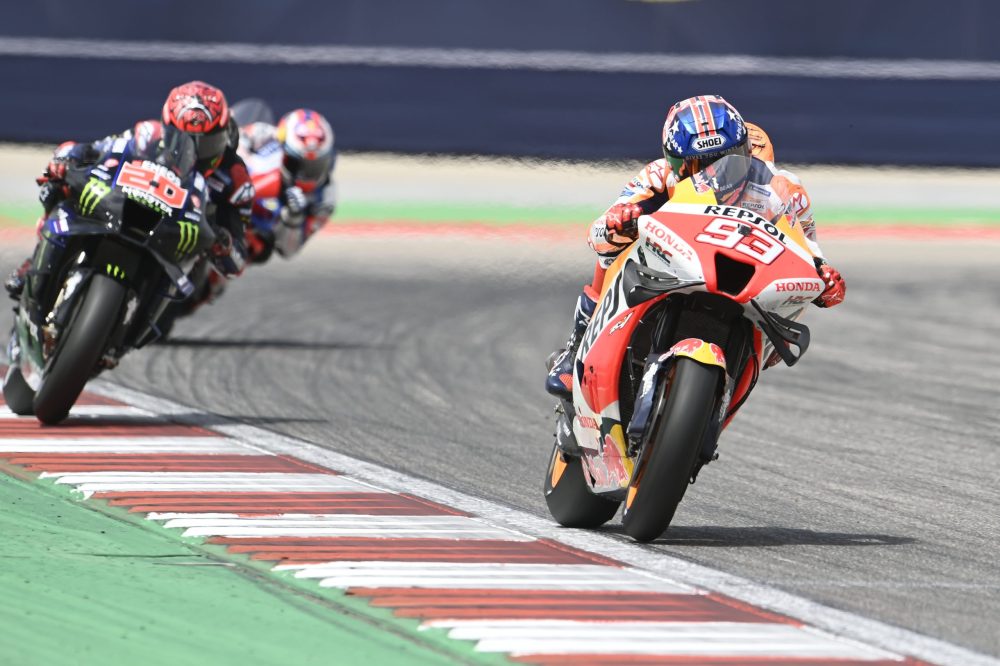 Yet as he hovered five seconds off the leader, Marquez was of no concern to the leaders. Rins very much was as he took advantage of his superior speed through the track’s serpentine first sector to repeatedly launch late-braking attacks into turn eleven. First, he passed Bagnaia on lap six. Then he was successfully by Zarco on lap nine after attacks at turns eleven and twelve. The downhill hairpin at eleven was soon the scene of yet another attack, this time on Bastainin on the following lap, only for the Italian to utilise that Ducati power to get back by on the straight. 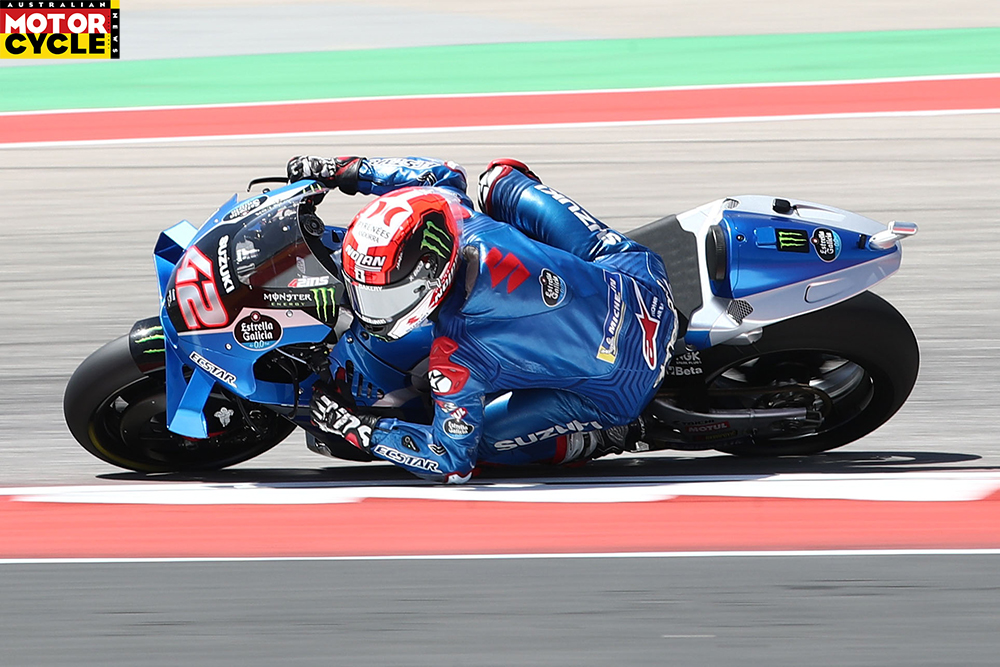 Rins’ advances were enough to spur Bastianini into action. “When I saw Rins close to me and he tried to overtake me many times, I knew it was time to push,” said the Gresini man. At half-race distance, Martin started to falter. As his rear tyre degraded, he started losing time onto the track’s two main straights. Soon Miller had 0.7s in hand out front, while Bastianini and Rins made short work of the Pramac man to sit second and third. 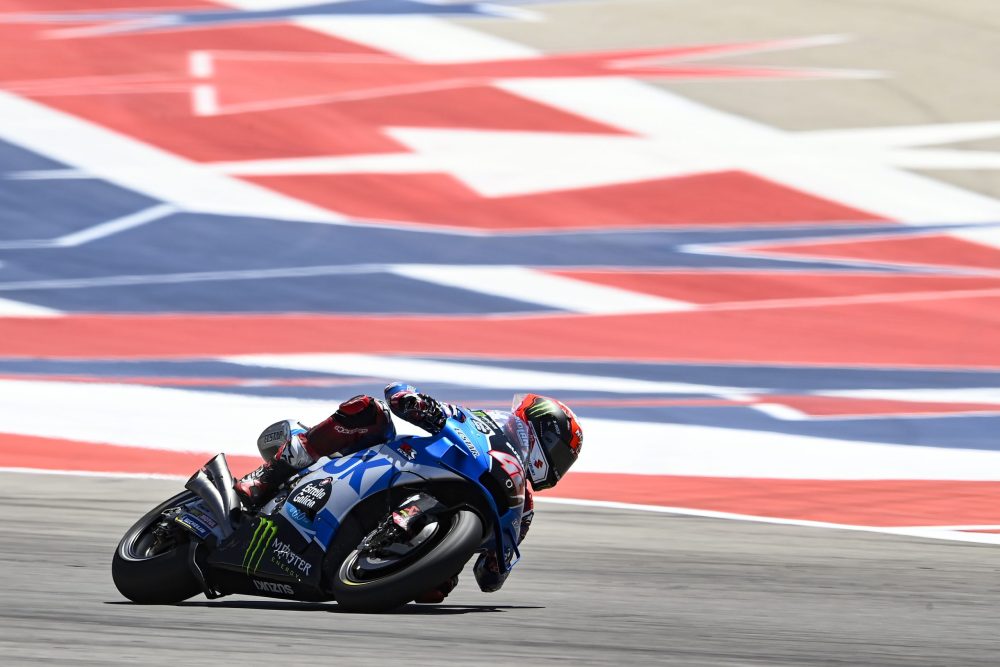 As well as Miller had ridden out front, the writing was on the wall on lap 14 as Bastianini posted the fastest lap, gapping Rins’ Suzuki behind. A lap later and he had eradicated the Australian’s lead entirely. The race-winning overtake on the back straight on lap 16 was a formality, with no one able to live with his late-race speed. He had enough in hand to eke out 2s over his pursuers by the flag. “It was a fantastic day,” said Bastianini, back in charge of the championship. “The first part of the race, Miller had a fast pace. The temperature of the front tyre was too high in the group but I pushed like a bastard to win here after Rins came by.” 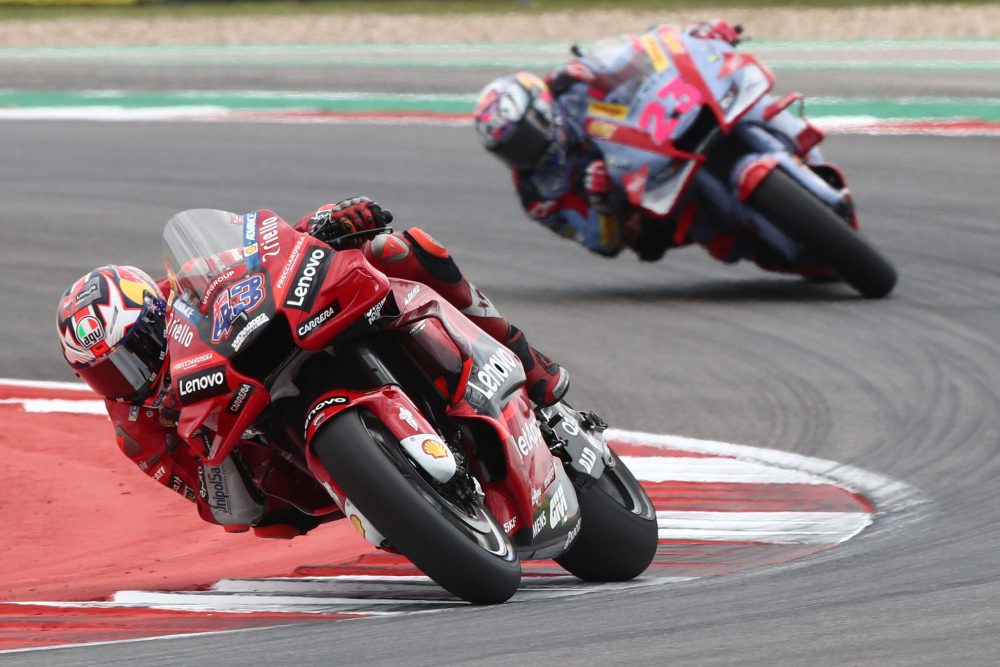 Any chances of a Ducati one-two were dashed at the end as Rins doggedly chased down Miller. After failing to make a move on turn eleven stick, the Suzuki man was clinical in the race’s penultimate turn to claim a season best result of second. “I was doing the first sector super-fast,” he explained. “This helped me recover the ground I was losing in the acceleration. I’m feeling super good.” Miller’s emotions were mixed. Or “50/50,” as he said. Losing out late on hurt. But this was a fine recovery from a tough weekend in Argentina. 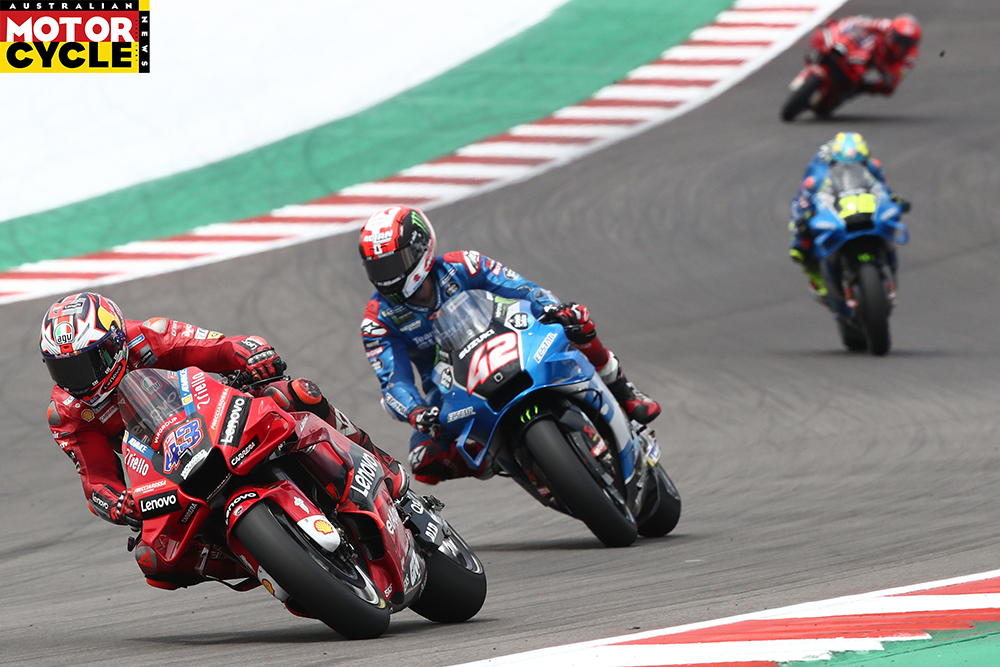 At his toughest track on the calendar, Mir shadowed his team-mate’s progress, fighting through to fourth, just 3.9s off the winner. As Martin dropped down the order, Bagnaia held onto fifth. But only just. Marquez reached sixth on lap 17, three on from yet another two-in-one on Quartararo and Zarco. By then, his tyres were finished. Rather than attack Bagnaia, he was focussed on behind as twice Quartararo launched attacks at turn seven in the final two laps. Twice he failed to hold the place. While some way off expectations, both men could be proud of their efforts. 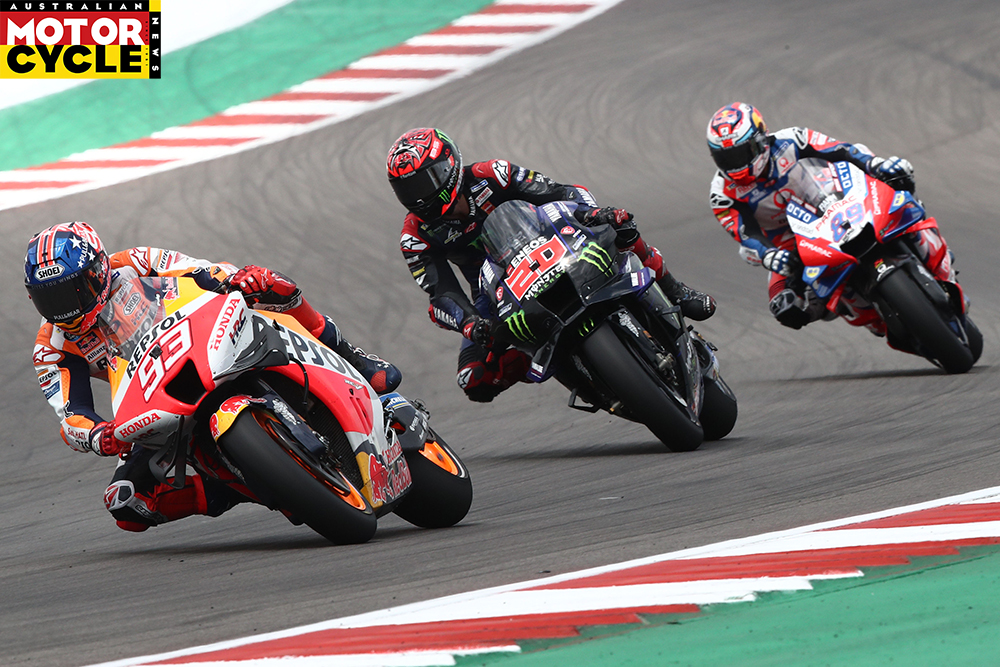 Martin was a distraught eighth, while Zarco’s early promise also came to nothing as he finished ninth. Viñales’ late-race pace was good enough for the podium but he had to make do with tenth, a place ahead of team-mate Aleix Espargaro. 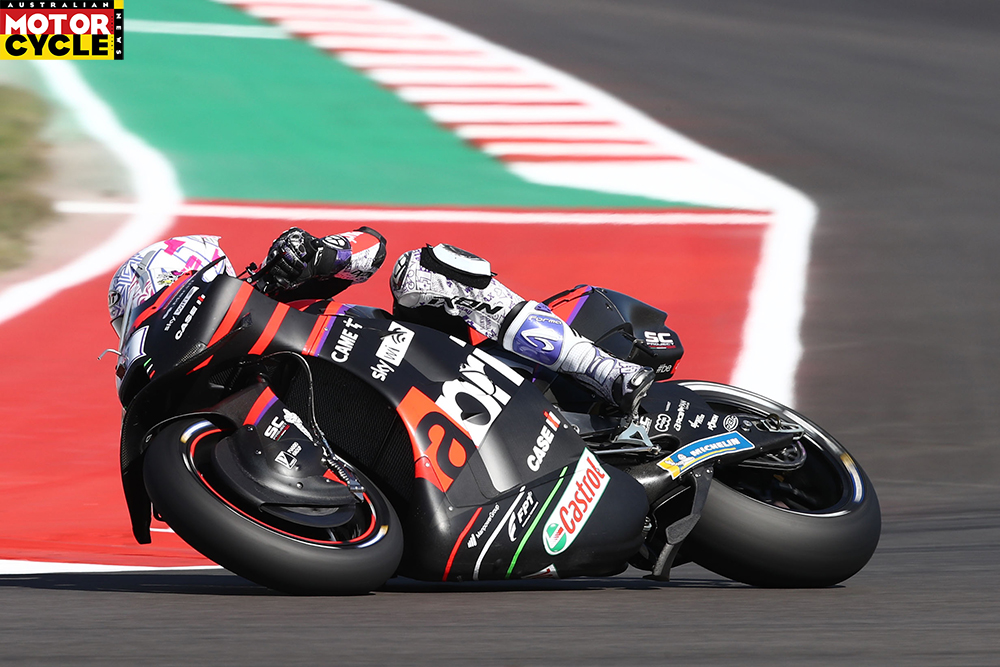 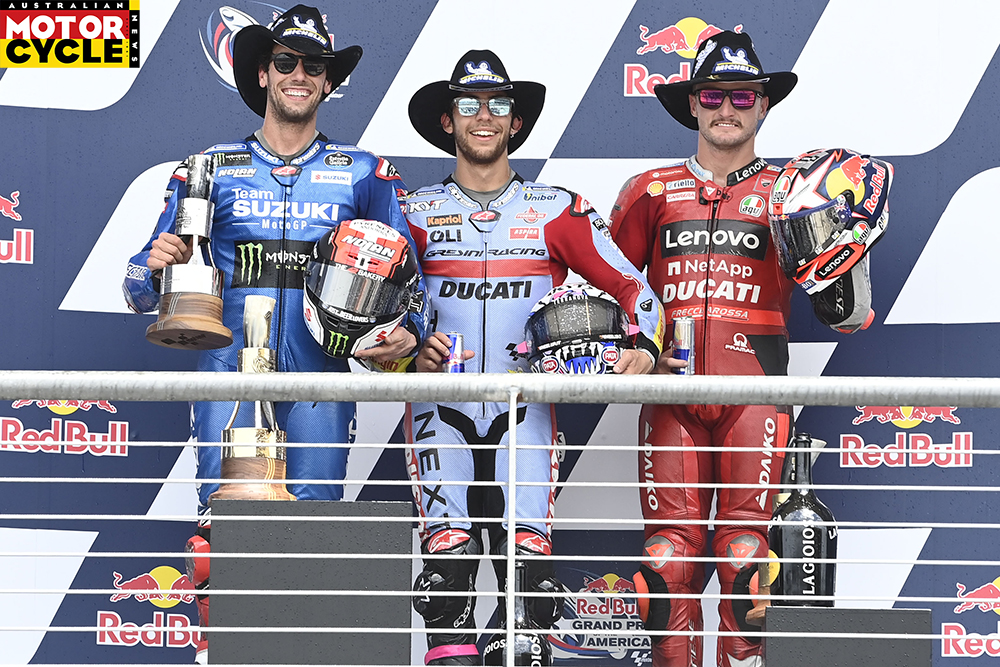 After one of the toughest weekends of his career in Argentina, Miller was immediately more competitive here. Around one of his favoured tracks, the Australian qualified second on Saturday, his first front row of the year, before producing his best performance of the season to date. A first podium of the season, his 16th in the premier class, was just rewards for a strong Sunday.

“I feel half and half,” Miller said soon after. “I rode a fantastic race. I can’t fault myself. Enea came past me and I hadn’t made a mistake all race. I didn’t have a braking marker, as I just had clear track ahead. So when he passed me, I got dragged in a couple of times and lost a big chunk of time to Alex. Then it was all down to the last lap and I just had nothing left at that point. Still, happy with how this weekend went.” 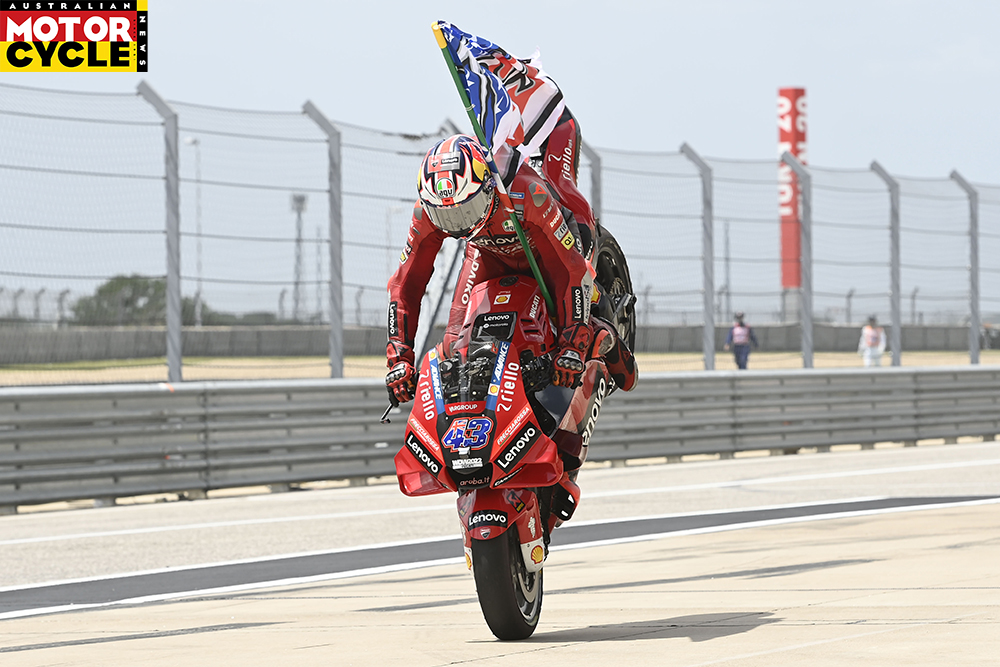