MORBIDELLI AND MILLER BATTLE AS MIR TAKES THE TITLE | MotoGP

In the fights that stand out in the memory, the best is usually saved for last. For some time, this historic occasion threatened to peter out into a lifeless procession. But a hard-charging Jack Miller (Pramac Ducati) produced his finest premier class showing to date to reel in long-time leader Franco Morbidelli (Petronas SRT Yamaha) just in time for a finale to savour.

It was a last lap for the ages. The lead changed hand four times in five turns with Morbidelli edging it by 0.093s for his third win of 2020. “A nice, clean fight,” Miller called it. “That’s what the people want to see and that’s what we got.” He wasn’t lying. So intense was the brawl, Morbidelli struggled to recall any details of that hectic final circuit. “I remember thinking, ‘Go underneath him no matter what,’” he said. That philosophy served him well. 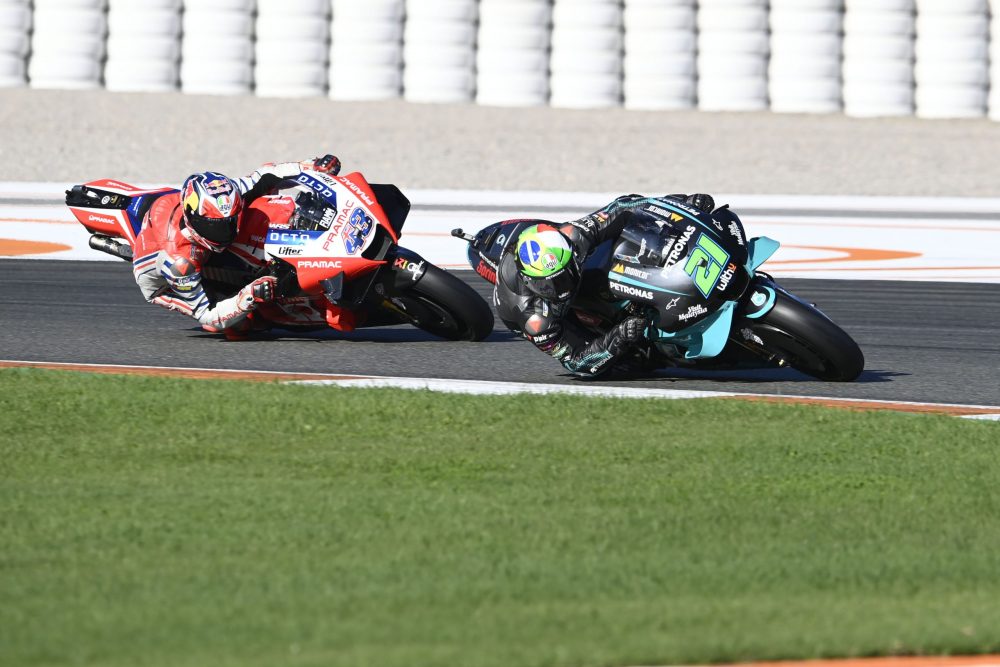 Yet even this epic final exchange couldn’t take away from the day’s big story: Joan Mir’s (Ecstar Suzuki) subdued seventh place was enough to seal this year’s world title, making him just the sixth rider to claim motorcycle racing’s greatest prize for Suzuki. It was a first title for the Hamamatsu factory in 20 years.

It was a lowkey means of securing a landmark achievement. No matter how you view it, Mir is the deserving winner of the 2020 title. At 23 years and 75 days, he became the seventh youngest rider in history to win the Holy Grail of two-wheel racing (84 days younger than fellow Majorcan Jorge Lorenzo). He’s only the fourth Spaniard to do so. And should he fail to win the season finale, Mir will have done it with the lowest win haul in history. 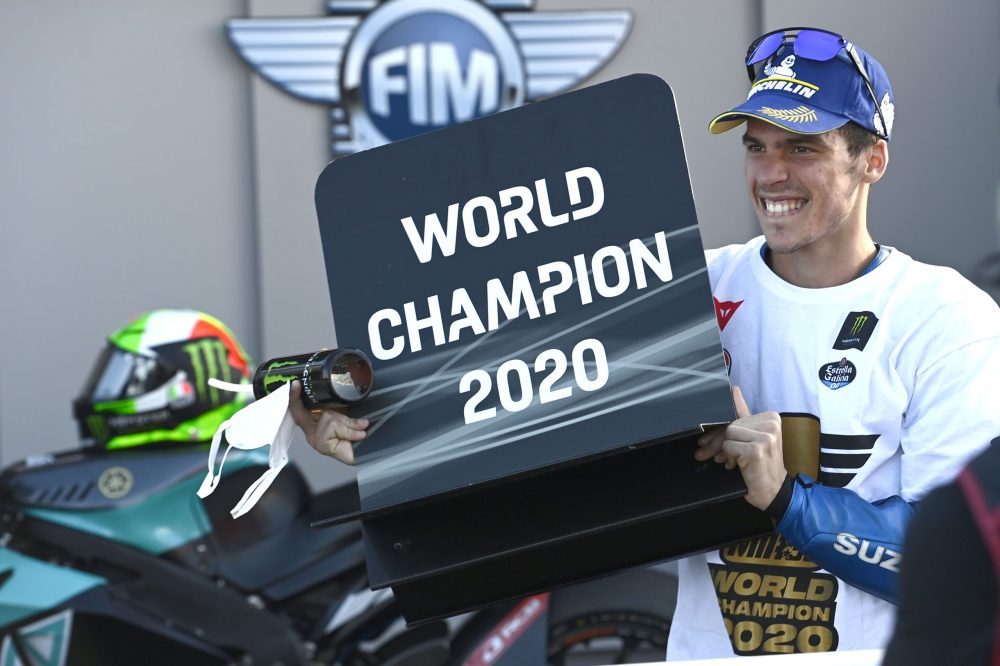 A safe, steady ride to seventh didn’t quite do it justice. Not that he cared. Unlike the previous week, there were a few signs of nerves here. Mir made it known on Saturday that, after an exhaustive few days of media commitments and months of COVID-19 paranoia, he did not want this to drag onto the season’s final weekend. “I was really nervous but showing a different face,” he admitted after. “This year was a difficult thing. We didn’t just have the pressure on the track. I had pressure at home to not get the virus.”

That showed as he fluffed his lines in qualifying. The only consolation was seeing Fabio Quartararo (Petronas SRT Yamaha) and Alex Rins (Ecstar Suzuki), who both needed wins to retain any championship hopes, suffer similar fates. The trio lined up eleventh (Quartararo), twelfth (Mir) and 14th (Rins) on the grid. His combative starts have become a feature of this campaign. But this was a more conservative showing. Aside from witnessing a hot-headed Quartararo narrowly avoid a collision with Maverick Viñales (Monster Energy Yamaha) just ahead two turns in, this was largely devoid of drama. 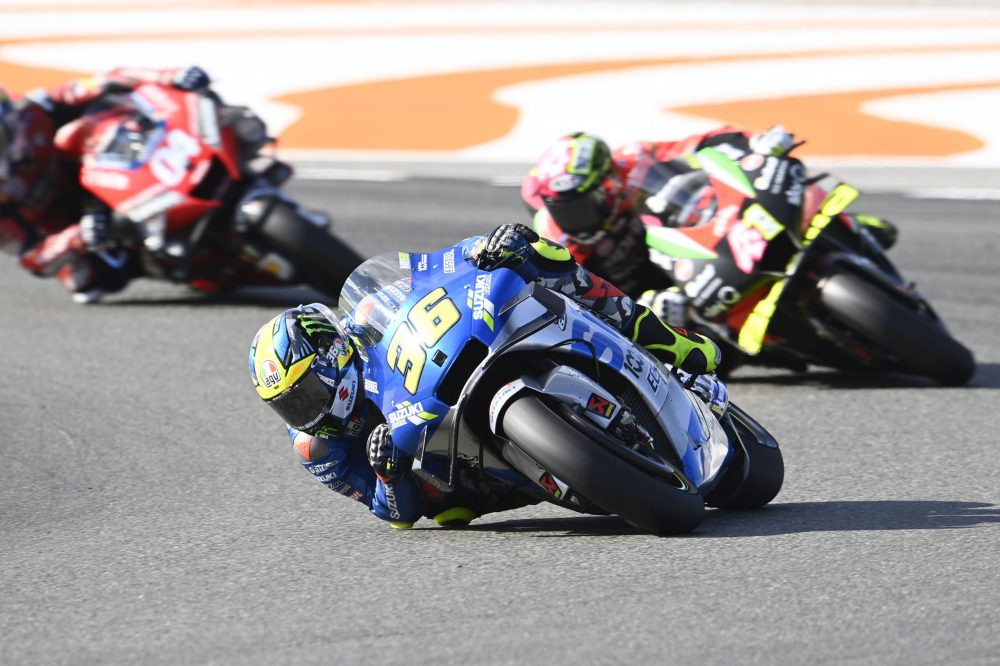 The approach was largely in line with the first 26 laps. As witnessed in his two prior wins in this campaign, pole man Morbidelli is content to lead from the front and did so after Miller ran wide into the first turn. Pol Espargaro (Red Bull KTM), Takaaki Nakagami (LCR Honda), Miguel Oliveira (Tech 3 KTM), Johann Zarco (Avintia Ducati), Rins and Aleix Espargaro (Gresini Aprilia) followed as a highspeed freight train formed at the front.

Aside from Quartararo’s meltdown – his first lap run off left him 21st and last before he crashed out of 18th on lap nine – and Zarco’s turn one fall from sixth, the early exchanges were uneventful. Rins and Brad Binder (Red Bull KTM) had both jumped Espargaro’s Aprilia. Mir had found safety in eighth, enough for the title. All the while, Morbidelli set the pace. And what a pace it was. Pulling just under a tenth of a second per lap, the Italian was using the wide, arcing lines of his ’19-spec Yamaha M1 to superb effect. By lap 13 his lead over Miller surpassed 1s for the first time. “I was just trying to hang on to the back of him with my teeth,” said the Australian. The group was pulled apart. 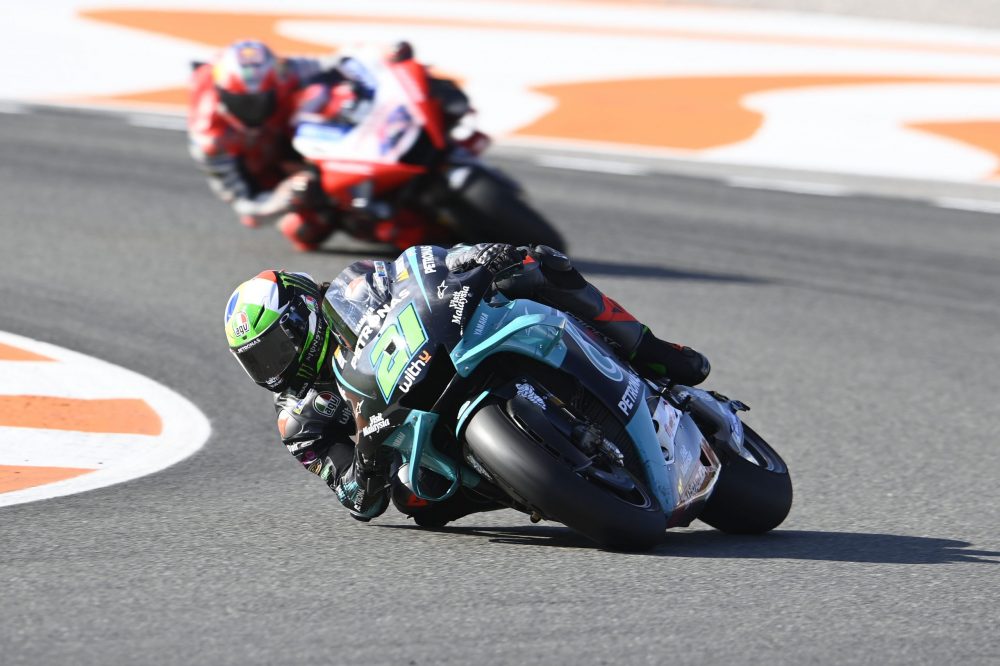 But just as this edged toward a sleepy conclusion, Miller came to life. The 25-year old posted the fastest lap the 17th time around. Now the lead was just 0.6s. Morbidelli rallied again, but the Ducati rider would not rest, his medium front tyre – the rest had gone with the hard – showing resilience as the laps ticked down. Nakagami had eradicated a two-second gap to close in on Espargaro. But as he attempted an opportunistic pass for third, he crashed at the final turn, losing the KTM rider time. This was now a two-horse race.

It was beautifully poised with one to go. Utilising the superior speed of his Desmosedici GP20, Miller breezed on the run to turn one. But he just missed his braking marker. “There was a tail wind and I got a little bit carried away,” he said. Running on the outside apex, Morbidelli was under him at turn two. Miller then succeeded at turn four. But again the Italian’s response was immediate. Even though the Ducati edged to his inside through turns seven and eleven, Morbidelli held firm to win by the narrowest of margins. “It was just a matter of answering to every move he was doing,” he said. “I think it was my best race in MotoGP so far. A super high rhythm and super nice battle at the end. A great, great feeling.” 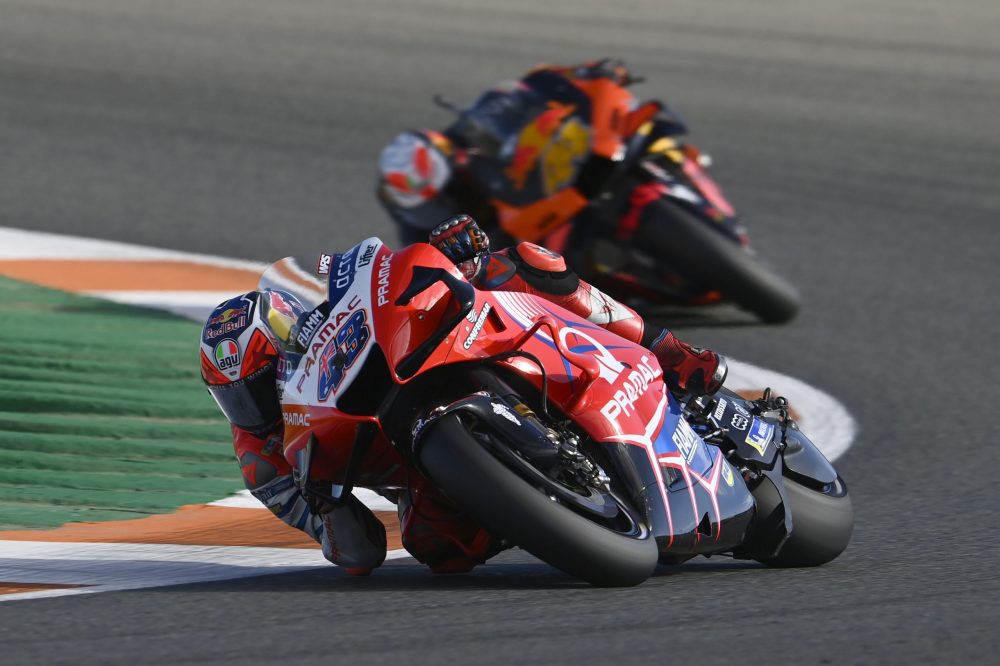 After the Nakagami scare, Espargaro had enough in hand to hold off Rins for a repeat third place, 3s off the winner. “We were smashing it on the brakes,” he said. “I was braking harder, catching Jack. But in the middle of race he put the turbo on. I was struggling so much in the entry with the rear, spinning quite a lot on the edge.” Rins passed Oliveira for fifth on lap eleven then inherited fourth when Nakagami fell. Ultimately, a poor qualifying prevented a repeat of the previous week’s feats. “I wanted to fight for the title until Portimao,” he rued. But insisted, “I’m so happy Joan got the title.”

Binder was superb in fifth, 4s off the winner, controlling his aggression as he rose from ninth on lap one. “I expected because I had a really good feeling going into the race but I didn’t have the same feeling during the race. Anyway it was really positive to be back in the top five,” he said. Oliveira made it three RC16s in the top six in another superb day for KTM. But he had hoped for more. “The key point was from T9 to T10, changing direction. I lost 0.1-0.2s and I couldn’t stay behind. I lost grip quite early.” 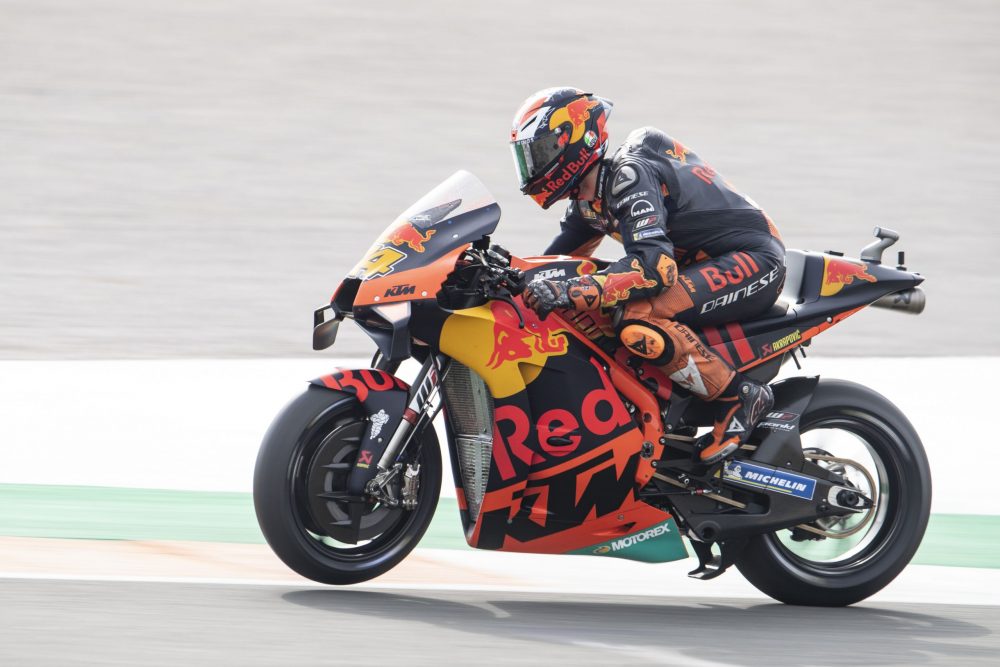 Then came Mir, after pushing Oliveira for sixth until the end. “I’m still in shock,” he said of toasting his first MotoGP title. “I saw the board with ‘World Champion’ on it, I said, ‘This is not happening!’ I started to cry. Doing the slowdown lap, I started to realise what was happening.” Andrea Dovizioso (Ducati Racing) was just back in eighth. Aleix Espargaro eventually dropped to ninth, a place ahead of the anonymous Viñales.

Mir (171 points) cannot be caught from here. His lead stands at 29 points with just 25 left in play. Morbidelli (142) moves into second, four ahead of Rins (138). Viñales (127) is fourth while Quartararo’s disastrous weekend sees his fall to fifth. 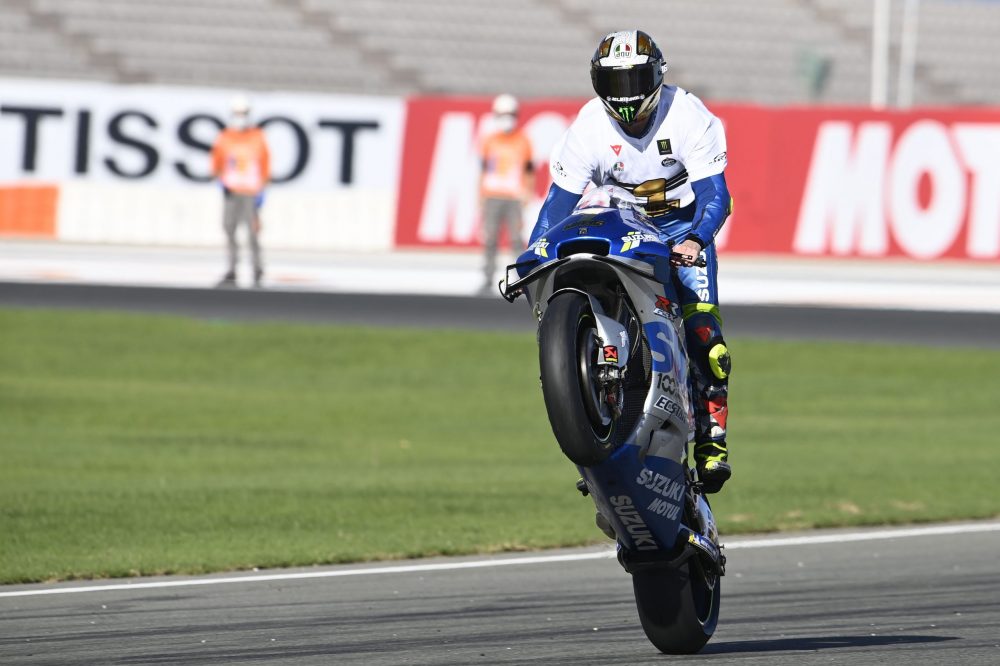