There’s 1441cc of madness lurking behind the fairings of the Kawasaki ZX-14R, madness that needs to be felt to be believed – but has it always been the case?

A lot of water has passed under the bridge since the ancestors of the Kawasaki ZX-14R roamed the planet laying waste to licences and speed records. Modern superbike power figures have in some cases surpassed those of Kawasaki’s 1400, weights have dropped and handling has improved. I have fond memories of the first ZX-14 but even so, like many, I have started to question the relevance of bikes like the ZX-14R and the Suzuki Hayabusa, which no longer boast power figures that no other bike can touch and which, let’s be frank, look a bit strange.

However, it’s just not the case that the lightest and most powerful motorcycle makes the best roadbike. It’s not about light, fast and manic – it’s about stability and brawn, about a huge engine with turbine-like power, and mighty, mighty torque. 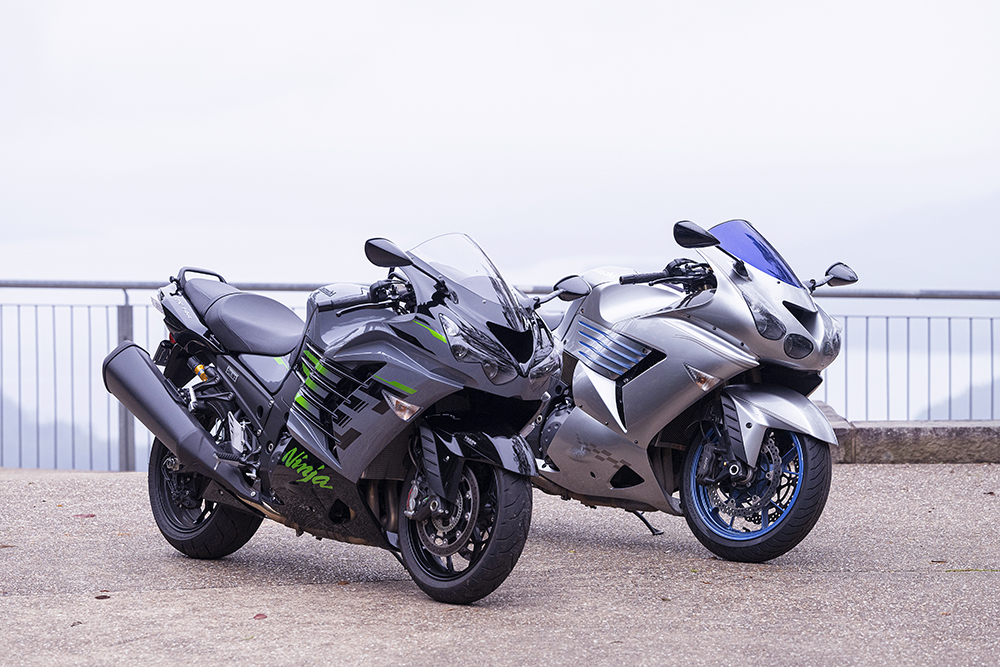 And with a current 2021 model in tow, we tracked down a 13-year-old Kawasaki ZX-14, owned by Kel’s dad Ian. Not to compare a 13-year-old bike which has just clicked over 56,000 kilometres to a fresh and tight new one, but to add light and shade to the improvements the 1400cc hyperbike has received over the years.

But let’s get down to brass tacks. These types of bikes – big-bore aerodynamically slippery powerhouses – have always been about the engine and they always will be about the engine, and the ZX-14R holds true to that tradition. Its 1441cc water-cooled DOHC inline four-cylinder lays down a tyre-frying 154.5kW (or just over 207hp) at 10,000rpm and 158.2Nm of belt-warping torque at 7,500rpm. To put that into perspective, that’s over 10Nm more than Kawasaki’s own outrageously powerful H2 and when people talk about the torque of electric bikes, well I’m sorry, but the 115Nm that Harley-Davidson’s $50k Livewire is putting out barely rates a mention. 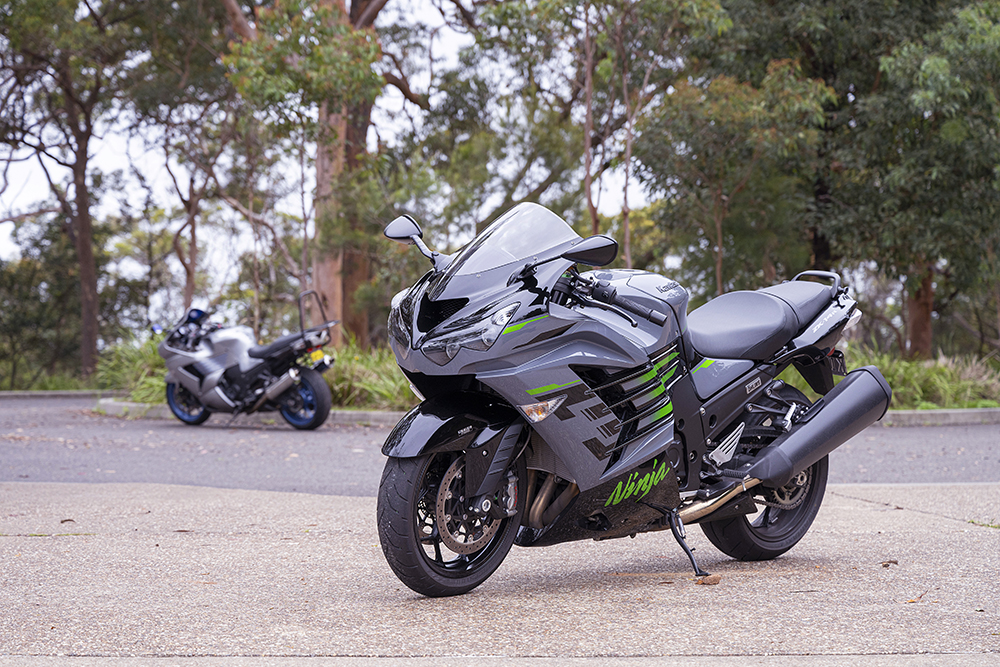 If you want torque and power figures that can go head-to-head with the 14, then your only options are Suzuki’s Hayabusa or a four-wheeler. No really, stop Googling; they are your only options. Needless to say, with that heady combination of brute strength you can find yourself at 10,000rpm very quickly in first, by which time you’ll be going very bloody fast, and if you’re mad enough to hold on until you reach the sweet spot in third your head is vibrating from the rushing wind so much you can barely make out what’s happening. And if you’re an absolute fruitcake and hit the magic 10 in sixth, then I simply wish you and your licence the best of luck.

Once you’ve scared last night’s dinner out of yourself and you realise that you can never use all that muscle on the road, you start to appreciate that it’s cubes that rule not only the crazy places in your mind, but also the sensible ones. 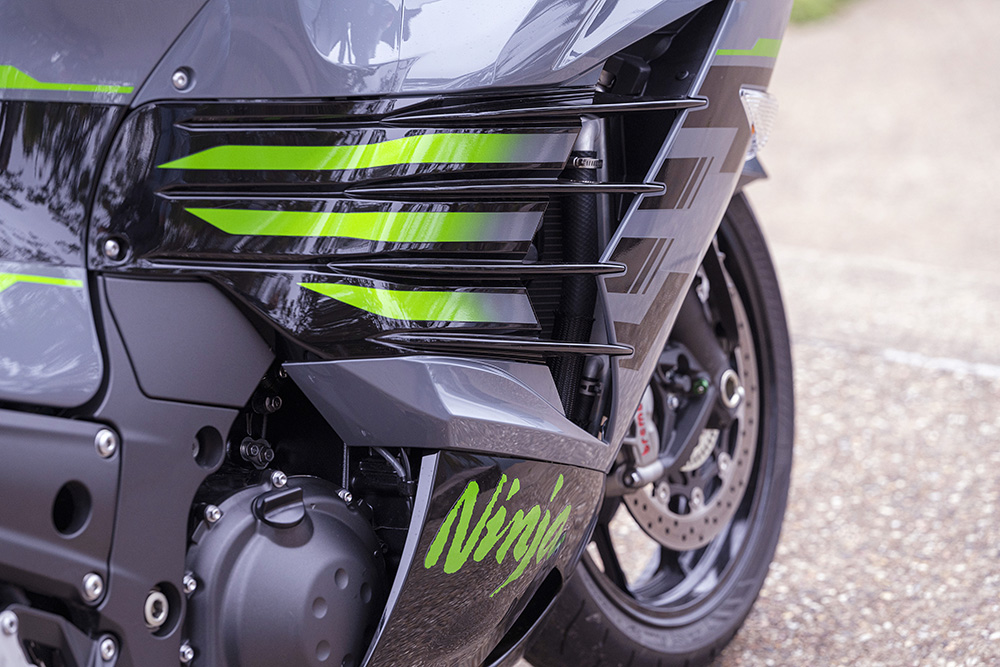 Big cubes mean that if laziness overtakes you – not much else will – then you can bang the 14 in sixth and leave it there. In a school zone: sixth, on a freeway: sixth, through a small 50km/h sign-posted town: sixth – the 14 doesn’t care. Even at 40km/h, the 14 is spinning at just a shade over 1500rpm and it’s smooth, requiring just a twist of the throttle to bring it back to life.

With such vast power you’ll never flog this engine so much that you’ll brake it so that just leaves big miles and not servicing it as your only concerns. Ian’s 2008, which has the smaller 1352cc motor, felt almost as strong, was no noisier and showed no signs of tiredness at all, despite having spun over 50,000 kilometres. 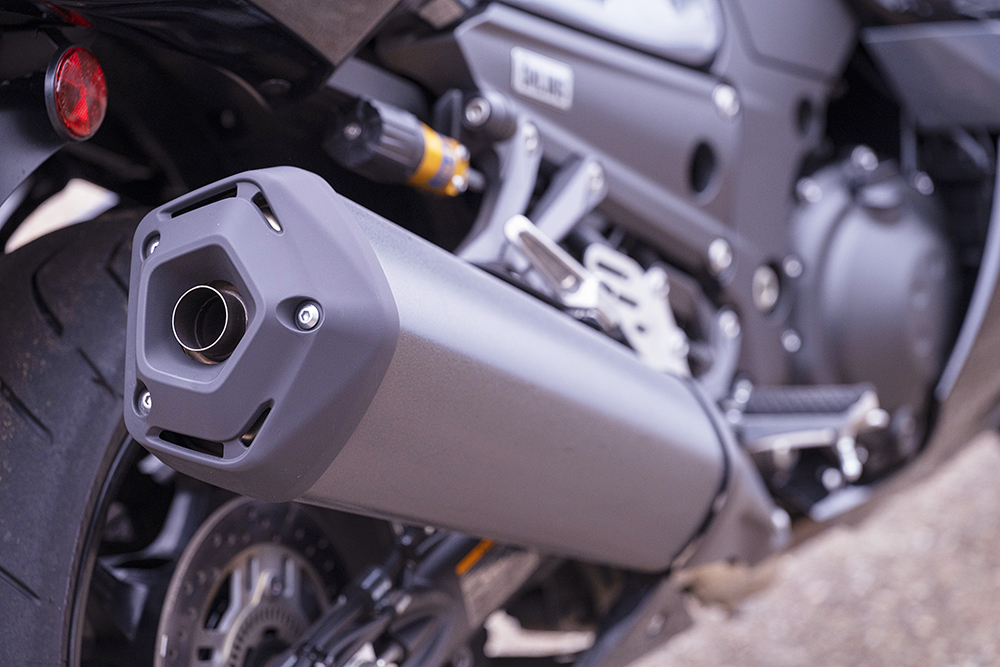 In real world situations where you rarely get to use all the power of a bike like these the real differences between the old and new is the responsiveness of the newer engine and the smoother less viby character when chugging along at low revs.

Despite wishing for a quickshifter, the 14R’s six-speed gearbox is ultra-smooth up or down and it doesn’t really rev up that fast so probably doesn’t need it – I’m just being lazy and Kawasaki’s quickshifters are so damn good these days, lazy is cool. The only issue I had was finding neutral, which was caused by the clutch not being adjusted properly – and there’s no adjustment at the lever apart from span so you can’t sort it quickly. 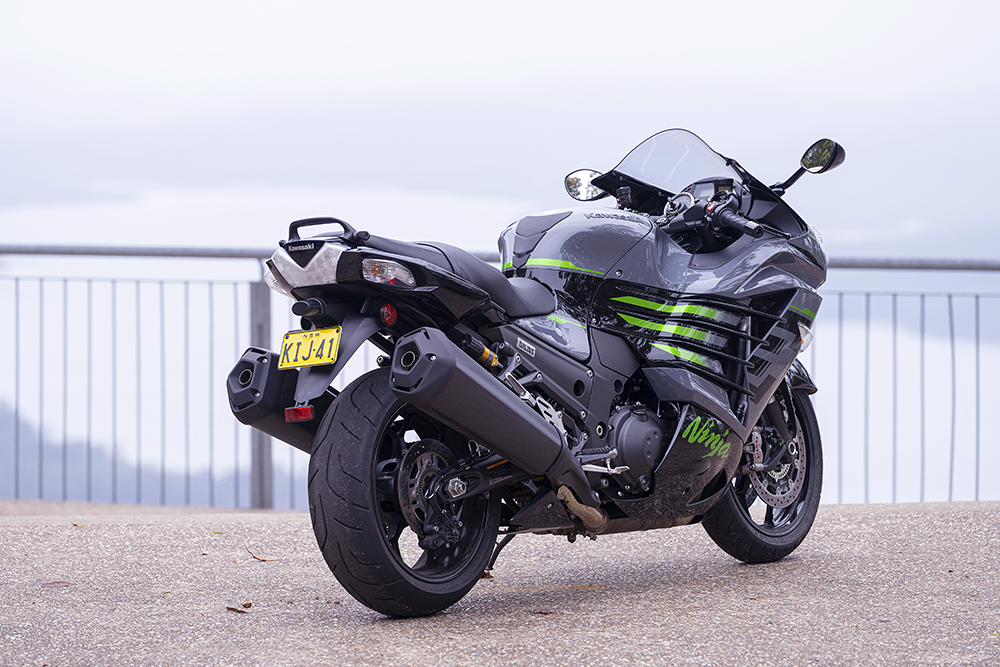 When you yank on the front Brembos, you can tell you’re on a 269kg bike. The brakes are by no means weak, but they just lack that savage instant bite and eyeball-popping power of modern Brembos on a lighter bike. There’s twin 310mm discs up front rather than the 320 or 330mm rotors many modern superbike are running, so this could also explain the stopping performance. They may not be up to superbike standard but there’s still bucket loads of performance and braking really late has the ABS light flashing and the front tyre chirping with just the slightest pulsing through the lever.

Rear braking is handled by a relatively large 250mm disc that’s kept in check by a Nissin twin piston setup – the whole two-different-brake-brands thing triggers some OCD tendencies for me. Despite the designer label Brembos on the 14R, the 13-year-old ZX-14 boasts Nissin anchors on the front, and frankly, feels just as strong in the braking department. 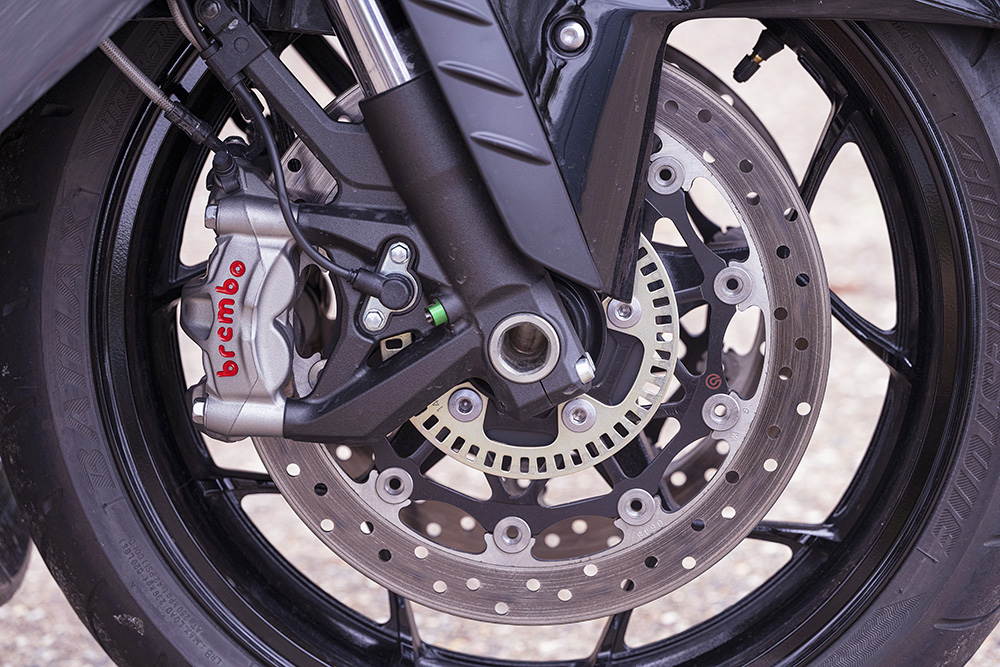 As well as braking, you get the sense of how much weight you’re lugging around when you arrive in a play area. Tight corners aren’t an issue and tipping the big 14 into a turn is pretty light work, but the difficulty comes when you have a switchback scenario where you need to pick the big girl up and throw her on the other side of her fat 190-profile rear tyre.

But the upside of this kind of behaviour is stability, in all areas. Once it’s on its side it just stays put no matter how good or bad the surface is. And it’s the same whether you’re meandering along a straight bit of tar or setting a new land-speed record, it just doesn’t knock your fillings out over bumps like a sportsbike does which makes it an altogether pleasant experience on the road without being boring through the fun parts. 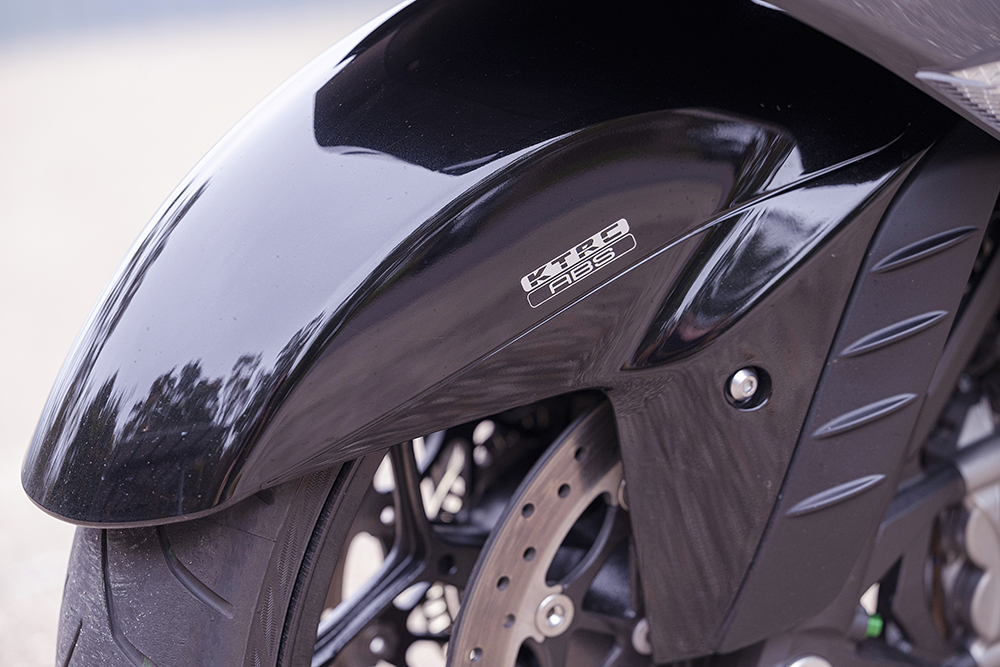 The 43mm KYB forks are fully adjustable and have anodised green caps on the top for your viewing pleasure, while on the back you get a fully adjustable Öhlins TTX shock with a remote preload adjuster. The suspension is spot-on from the factory for my weight when road riding with more than enough adjustment available to compensate if you’re carrying a passenger or loading the sucker up with luggage.

It was hard to compare whether the chassis updates of the ZX-14R made a big difference to the handling or ride over the ZX-14 because the 56,000km-old rear shock (which we think is a KYB unit) on the older bike is getting a little tired and needs some love to restore it to its former glory. 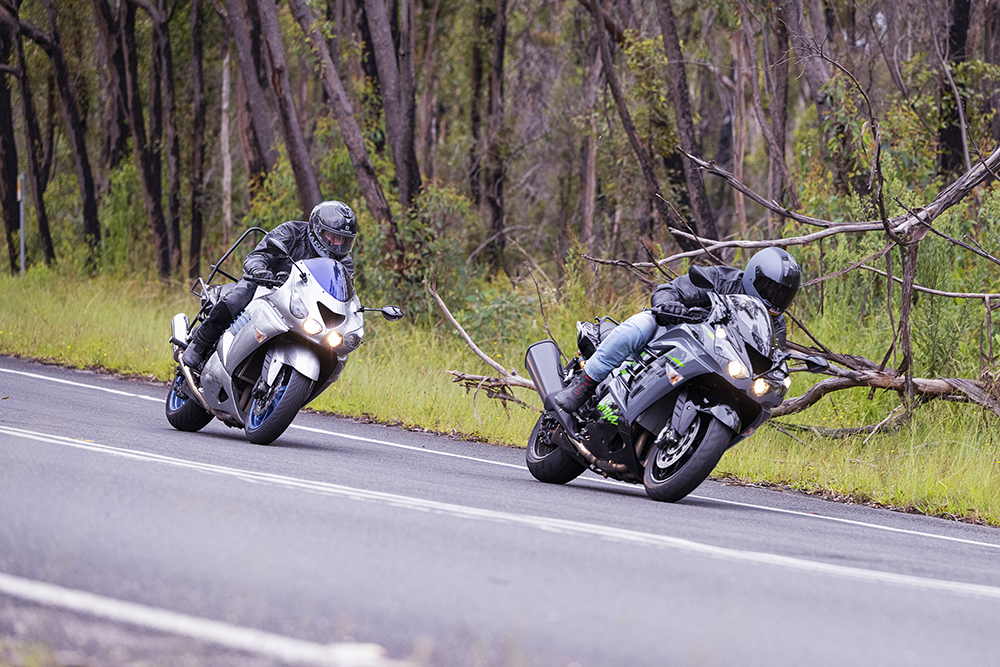 The long, low and heavy effect can also be felt around town and both versions are as stable as a concrete slab when you’re dealing with slow-speed city riding and it’s a remarkably adept lane-splitter, although it is a good idea to tuck the mirrors in. They hang out a fair bit and hinder its traffic slicing prowess, but otherwise great in allowing you to see more than your elbow.

Then and now, the 14 is still a physically big bike and, as someone who started his road-riding career in the 90s, it feels like large-capacity bikes used to feel – big, rock solid and roomy. At 186cm tall and built for comfort rather than speed, I fit the 14R perfectly – there’s plenty of room for all my bits, with just a mild stretch to the bars that doesn’t leave my back and wrists aching but still puts enough forward bias in the ergonomics to make you feel like you can get your sport on. 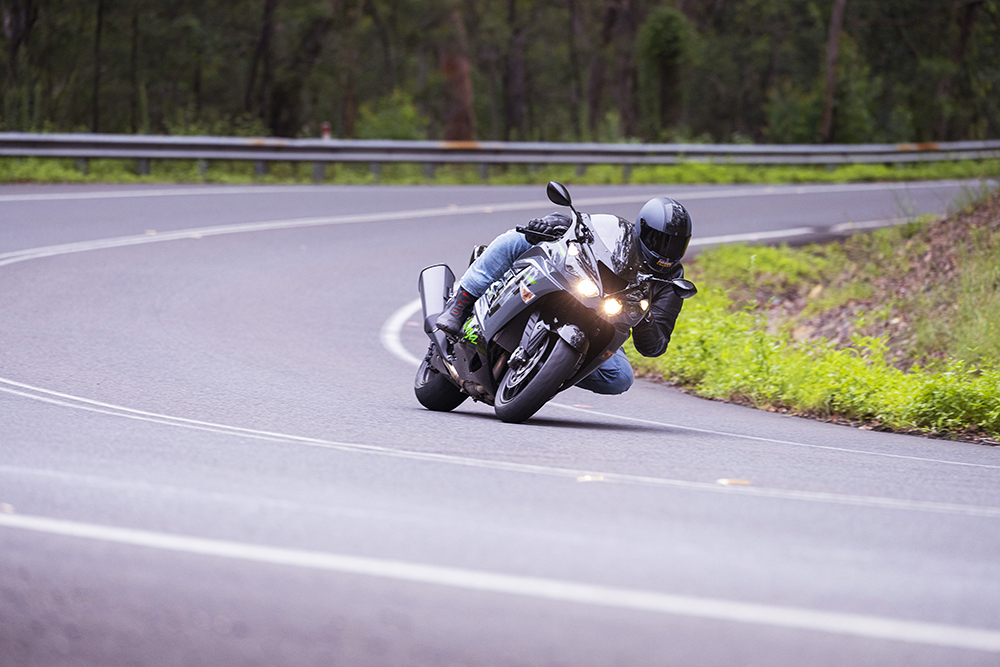 Ian, on the other hand, at 165cm tall and a rather more slender 77kg experiences a similar level of ergonomic all-day comfort, which speaks volumes for the effort put in by the design teams and to the sheer versatility of these big-bore behemoths. And when jumping from the 14R to the older 14, there’s bugger-all noticeable differences in the ergonomics – it felt the same.

The 22-litre tank doesn’t impede movement on the bike and the seat is comfortable enough to support any-sized tush for many hundreds of kilometres at a time and, the good news for Ian and his not-as-tall peers, is it boasts a fairly reasonable 800mm seat height. The pillion seat looks comfortable enough, too, but after I finished describing the power characteristics of the 14 and how I like to use them excessively, my missus told me where to go when I offered her the pillion-seat testing gig. 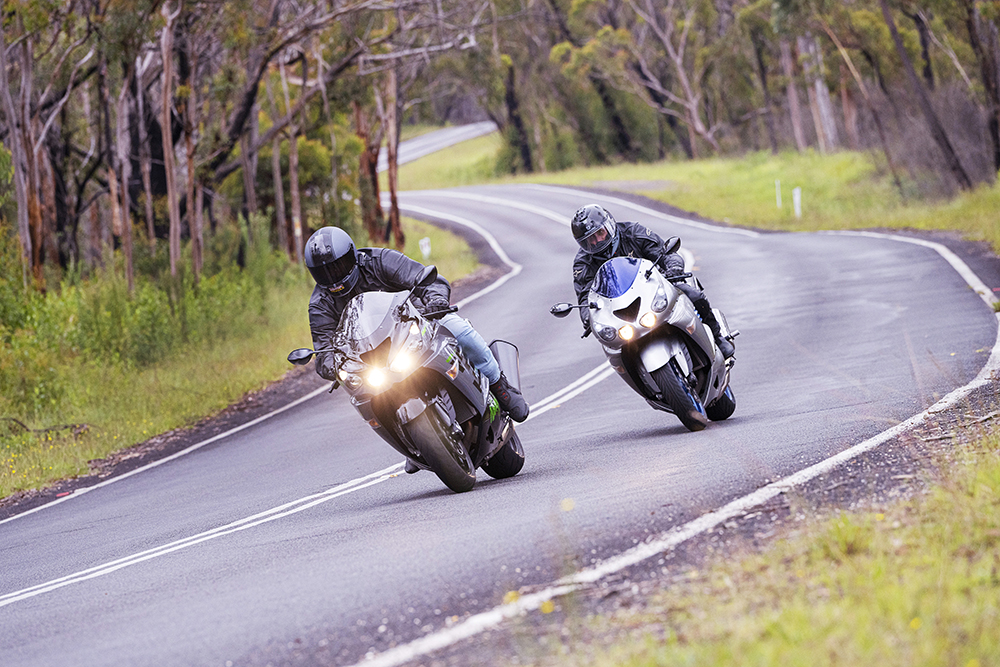 A large analogue tacho and speedo let you know roughly how long you’ll spend in jail and they flank an LCD display that gives you other useful info like ambient temperature, fuel level and time. The display is very similar to the ’08 model’s, but Kawasaki has crammed a bunch of extra information onto the screen, and subsequently it’s a bit cluttered and I found myself spending time searching for the info I wanted rather than falling to my eye on the ZX-14.

When compared to modern fare at this price, or even below it, the ZX-14R is fairly low tech. There are no ride modes, no 6-axis IMUs, no lean-angle sensitive ABS or traction control, but what you do get is two power modes – Full or Low – and adjustable traction control. The Low mode makes a big difference to the 14’s power output and makes getting all that torque and power from the back tyre to the surface in wet or greasy conditions a bit easier, as well as stopping the traction control from having conniptions every time you get excited with the right hand. Having said that, with traction control set to level one, you can happily rip a neighbour-offending burnout. 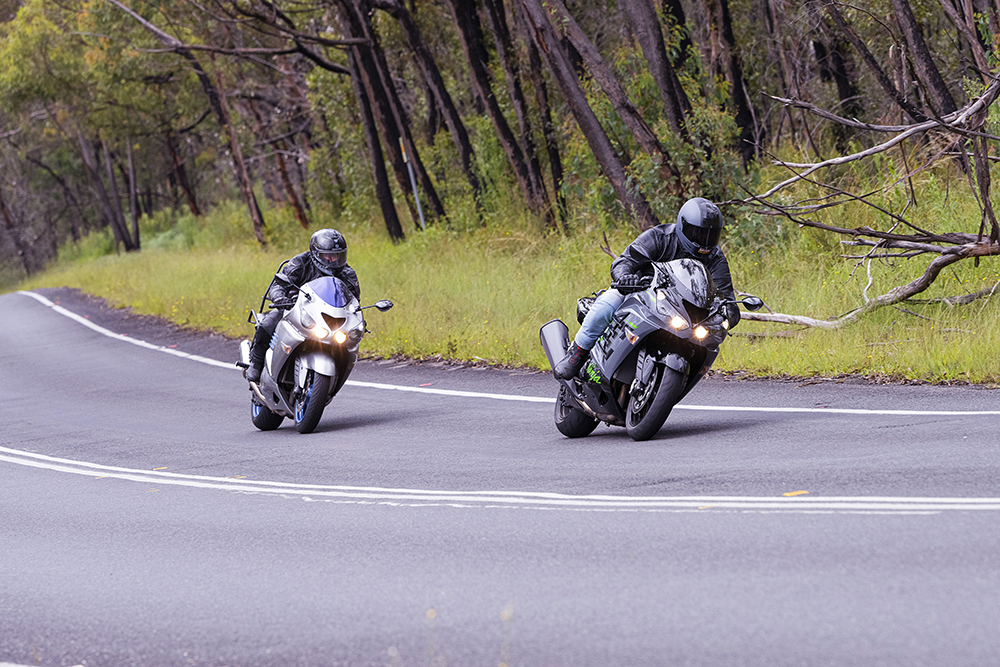 There’s also no cruise control or heated grips, which there really needs to be on a bike this capable of munching very fast miles and at this price point.

Speaking of price point, that’s where my only other gripe lays. It’s pretty bare bones by modern standards, and if I’m honest, I reckon that’s a little disappointing when you’re paying $22,099 plus on-road costs. Okay, it’s only risen $3009 in the 13 years since 2008, but the Hayabusa hovered within $1000 of its 2008 price (admittedly the 2021 model is $27,690 ride away), and other than inflation there’s not a lot of performance benefits afforded by your extra three grand. 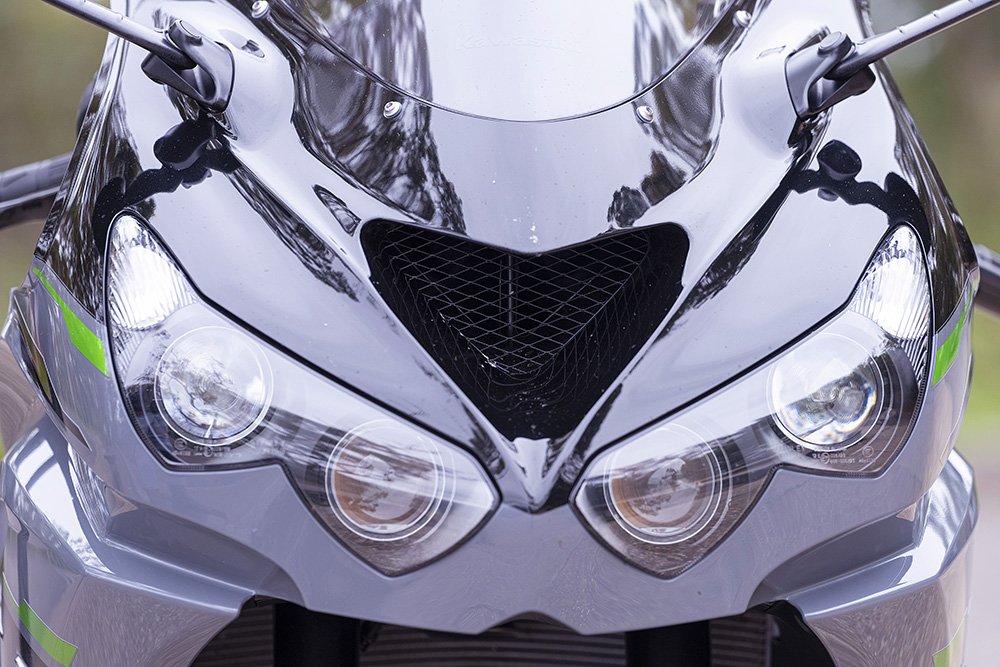 With so much tech-savvy competition in this low-$20K price point these days, and with so much remaining unchanged since the ZX-14’s inception way back in 2005, I reckon it’s the bang-for-buck holding the ZX-14R back rather than its inability to be an awesome all-round ride. Cos it really is.

If you like the sound of what I’m putting down, then I implore you to go and test ride one. Shit, I’d suggest test riding one even if you have no intentions of buying one, just because everyone should have a ride on a 14R at least once in their lives.

But if you are going to stump up the cash, it would be helpful if you own a tyre manufacturing facility (because burnouts are so damn easy) and be forewarned that your licence will never be the same again. 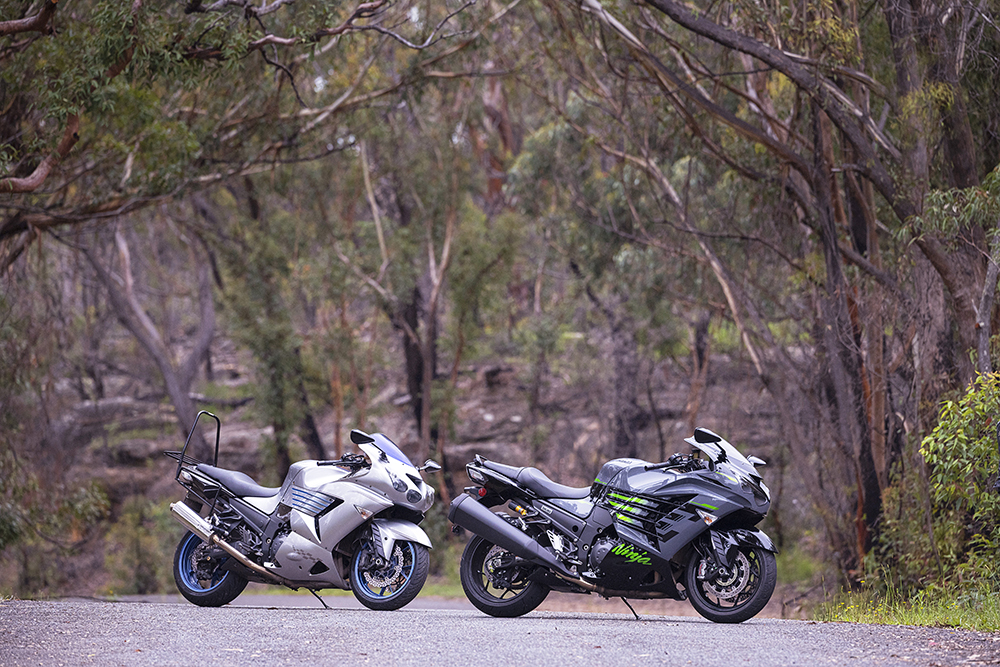