Kawasaki lays out its future with a new name, new logo and ambitious plans for the marquees bike branch

Kawasaki has outlined radical plans for its future including the intention to have at least 10 electrified bikes on the market by 2025 and to have a completely electric or hybrid model range in developed countries a decade later. 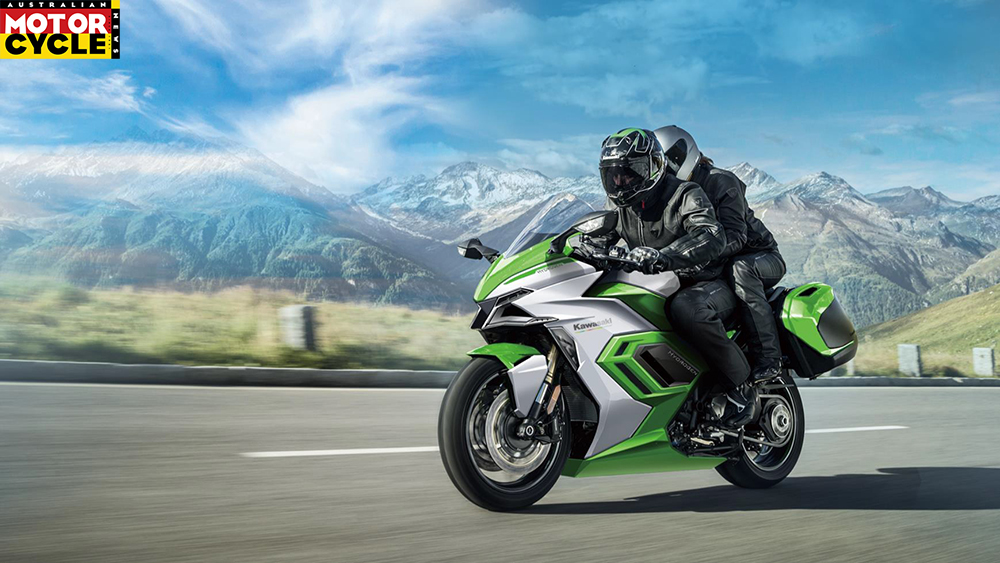 At a presentation in Tokyo, the firm revealed its carbon-neutral intentions, and in the process took the wraps off the hybrid motorcycle prototype that has been the subject of teaser videos for the last year. Although a testbed rather than intended for production, the hybrid’s layout and technology are likely to be carried over to showroom machines by 2025. 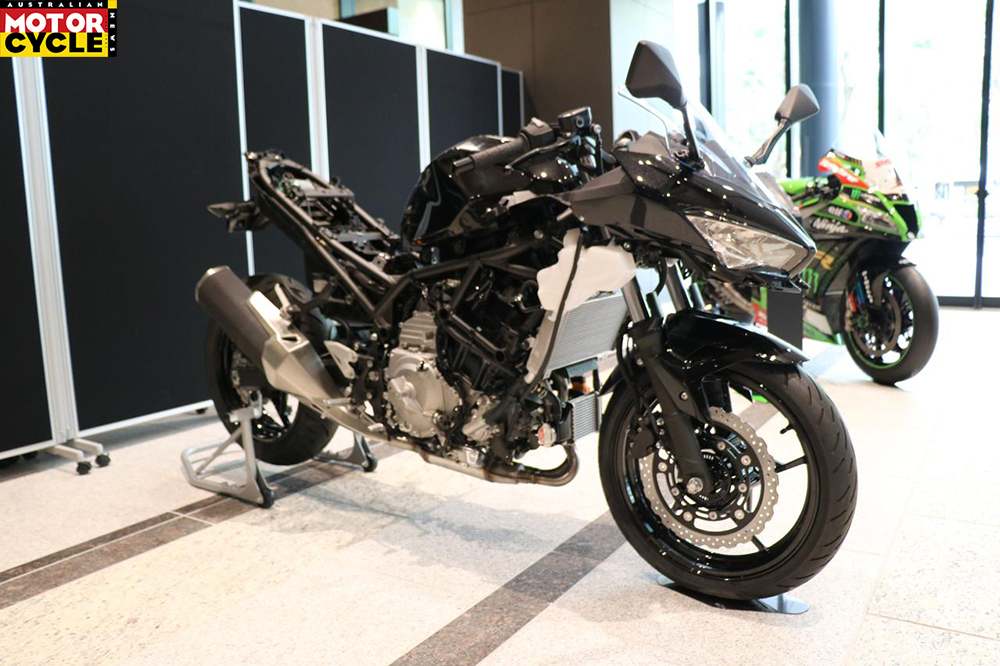 The hybrid is based around one of Kawasaki’s existing parallel twin engines – it appears to be either the Ninja 250 or Ninja 400 unit, with the size of the exhaust pipe pointing towards the latter. A large electric motor is mounted above the gearbox, and although Kawasaki hasn’t released technical details, patents filed by the firm have shown that the system works by allowing either the combustion engine, the electric motor or both to be engaged, using clutches to connect or disconnect them from the transmission. That gearbox is a conventional multi-speed design, but with the shift and clutch controlled electronically so there are bar-mounted buttons to change ratio instead of a conventional foot lever. 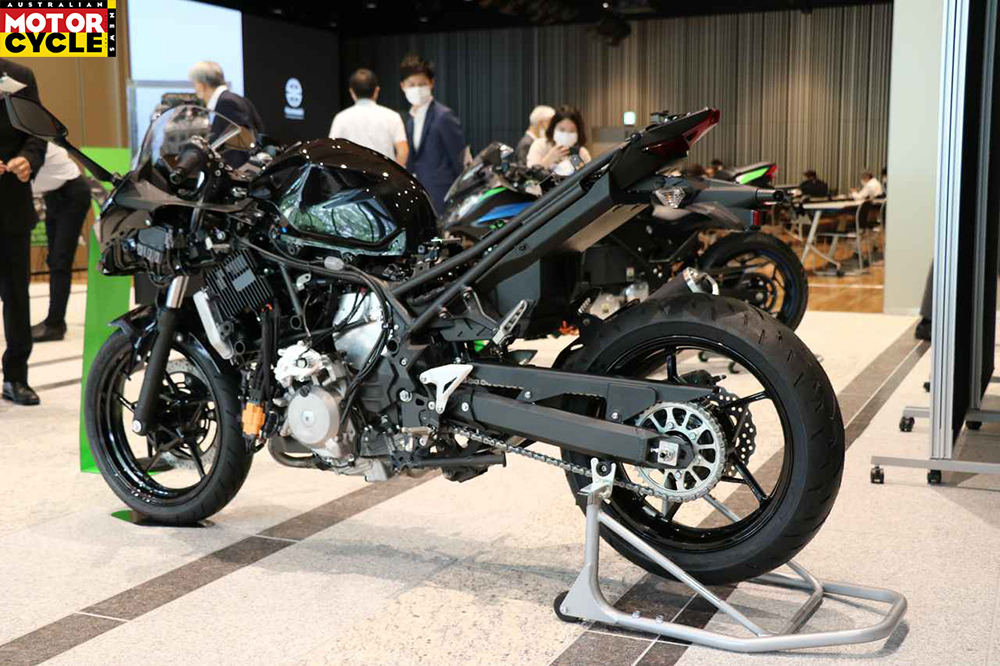 The idea is that the bike can run on the combustion engine alone when cruising at economical speeds, with any excess power being used to recharge the 48-volt battery sitting under the rider’s seat. In cities, the bike can switch to all-electric mode, disengaging and switching off the combustion engine and instead engaging the electric motor.  It can even use GPS coordinates to do it automatically upon reaching zero-emissions zones in city centres. 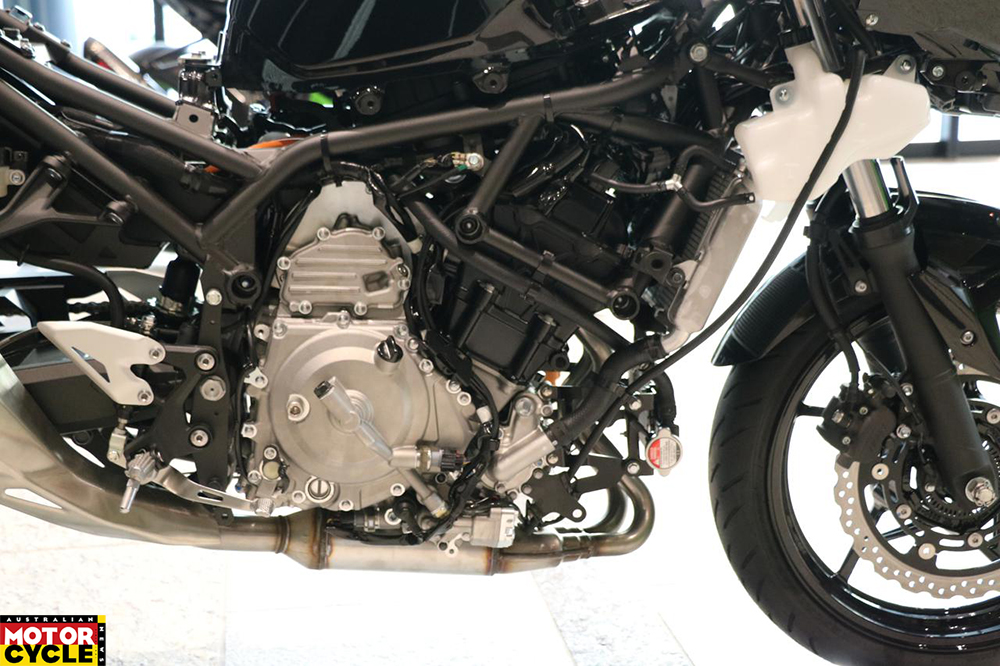 For maximum performance, the bike can be ridden using both the combustion engine and the electric motor together, giving the acceleration of a much larger-engined bike. Each mode can be manually selected from the bars, giving the rider total control. 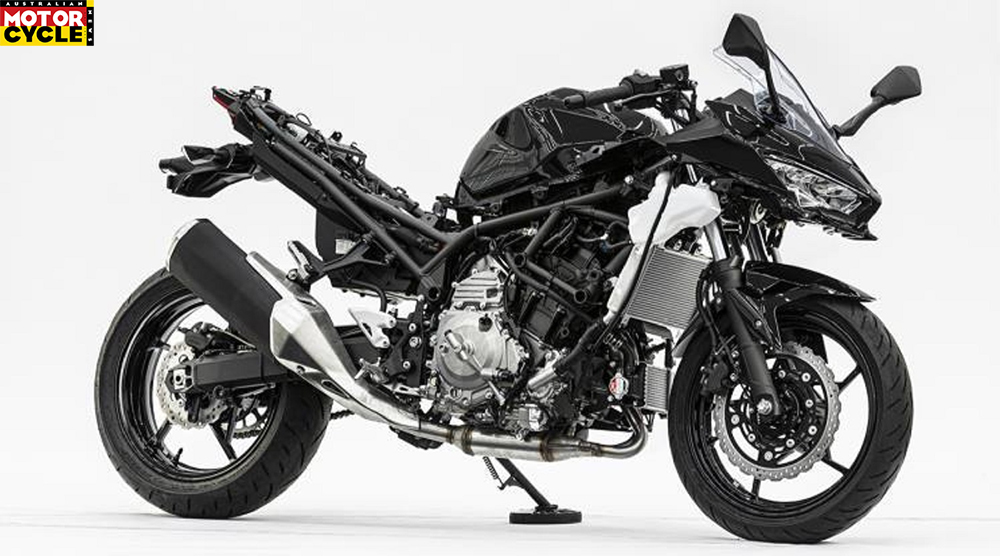 Kawasaki also showed its electric Ninja prototype at the presentation, looking much the same as it did when it was unveiled in late 2019. This machine, based on a Ninja 250, has relatively low performance but maintains key elements that will be familiar to existing riders, including a manual gearchange and clutch, to make it more entertaining than the more commonly found twist-and-go electric bikes. 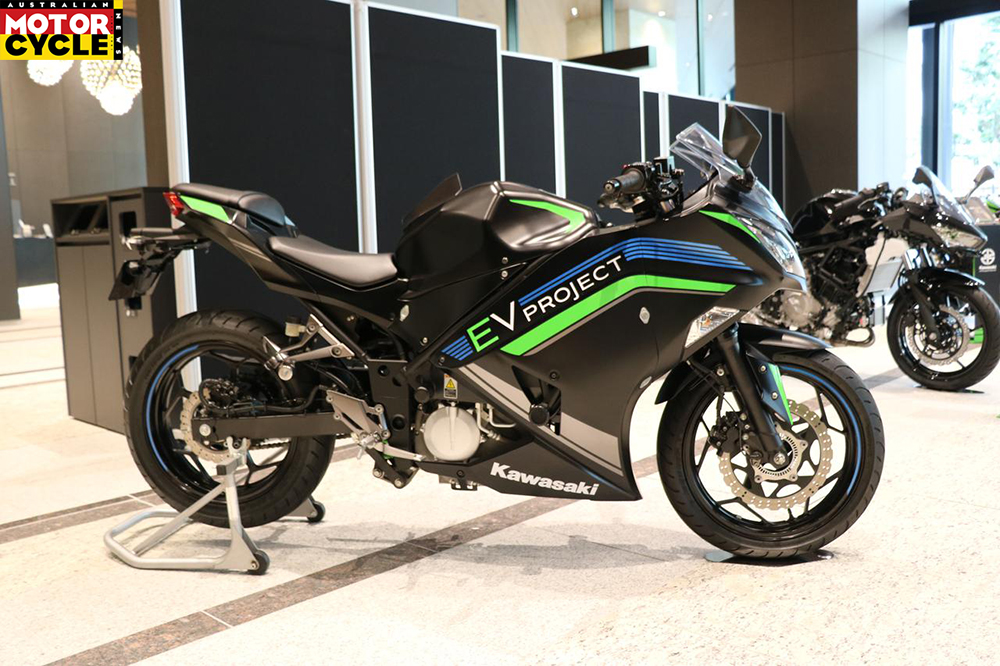 While the firm hasn’t revealed details of actual production electric or hybrid bikes yet, it says there will be at least 10 battery electric (BEV) or hybrid electric (HEV) models in its range by 2025, little more than three years from now. That will be enough to put it among the leaders in the race to electrify motorcycling. By 2035, every Kawasaki sold in developed countries will be either BEV or HEV. 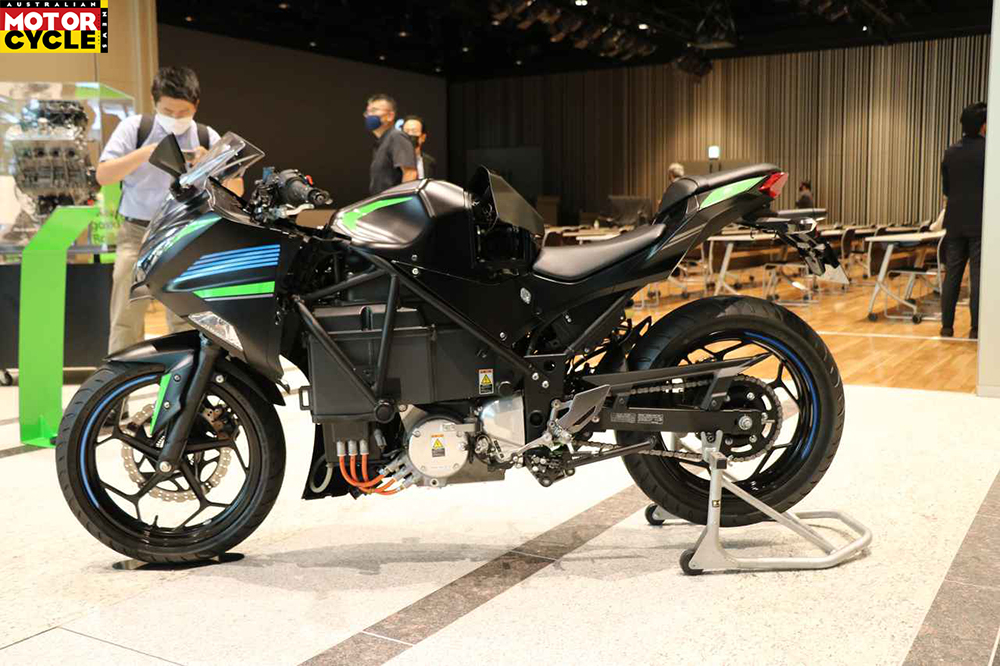 The focus might be on zero-emissions machines, but Kawasaki will still have plenty of new combustion engined bikes in the future. 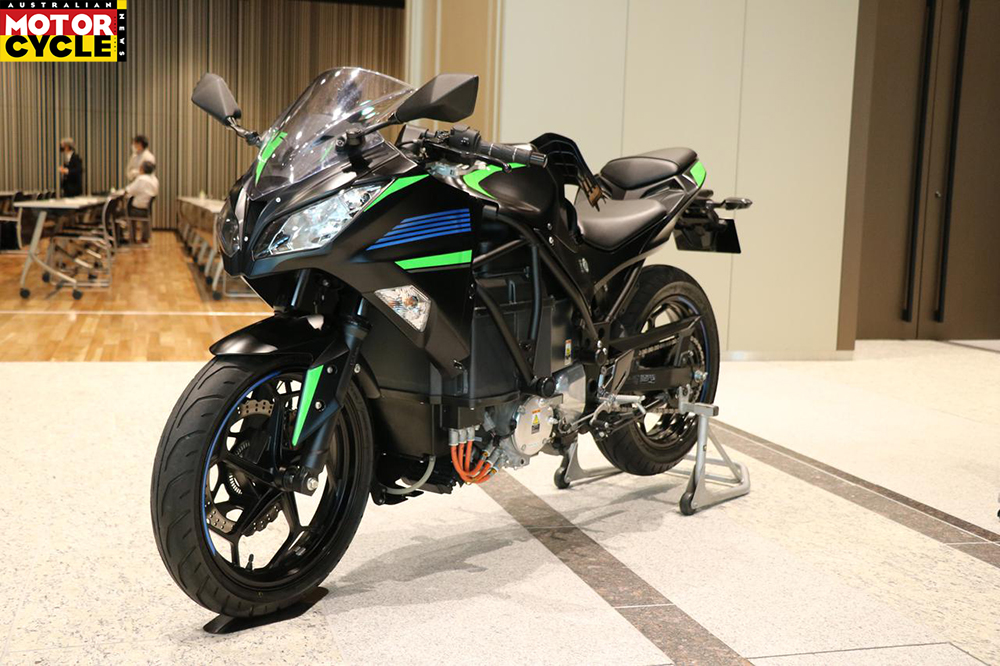 While there’s a focus on battery-electric and hybrid bikes to meet environmental goals Kawasaki is also working hard on hydrogen-fuelled combustion engine technology with an eye to future carbon-neutral, high-performance bikes that still use combustion engines.

The firm has revealed a direct fuel-injected version of the Ninja H2’s supercharged four-cylinder engine, which is part of a development project to create a hydrogen powered version. 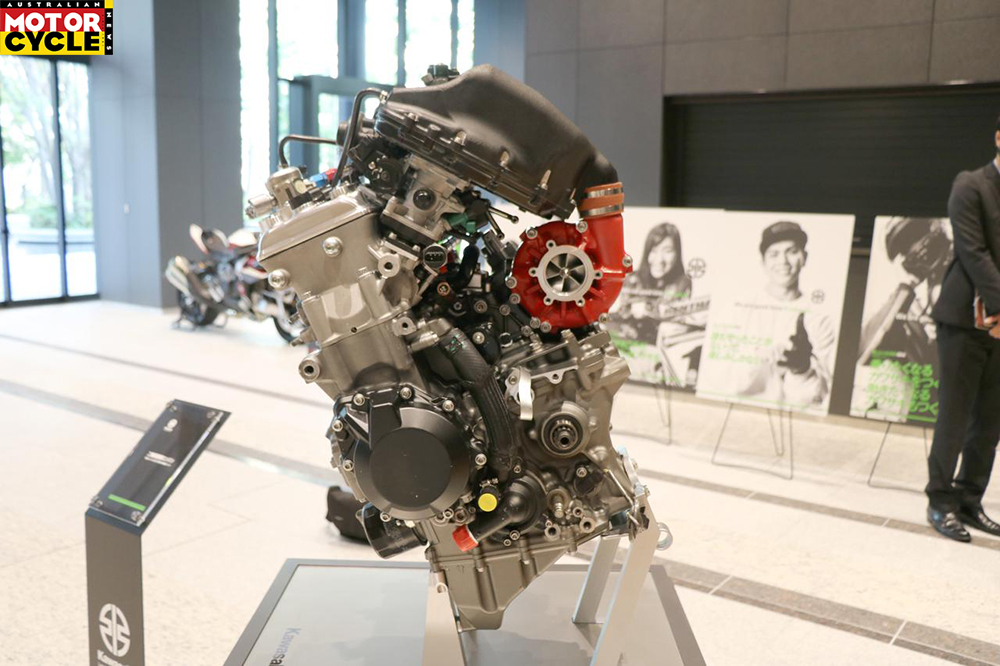 Direct injection has yet to be adopted by a production motorcycle, thanks in part to the cost and difficulty in making an injection system that can work fast enough to cater to a high-revving motorcycle motor. However, for a hydrogen-fuelled engine it’s a vital step if performance is to be maintained. Forced induction – supercharging or turbocharging – is also hugely beneficial to a hydrogen-fuelled combustion engine, so Kawasaki already has a head start in that respect. 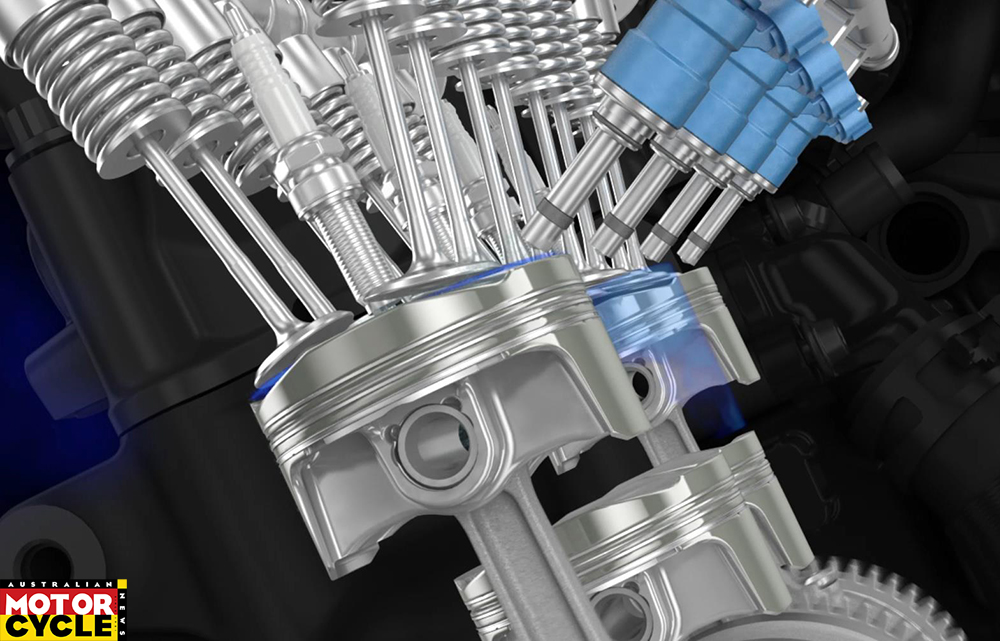 The DI version of the H2 engine is actually dual-injected. There’s still a conventional fuel rail feeding a port-injection system, but a second, high-pressure rail feeds injectors firing straight into the cylinders. While the low-pressure, port injection system runs at around 44psi, the direct injection needs a massive 1450psi (according to patents filed previously by Kawasaki), and as such it has its own dedicated mechanical fuel pump, operated by an additional lobe on the exhaust camshaft. 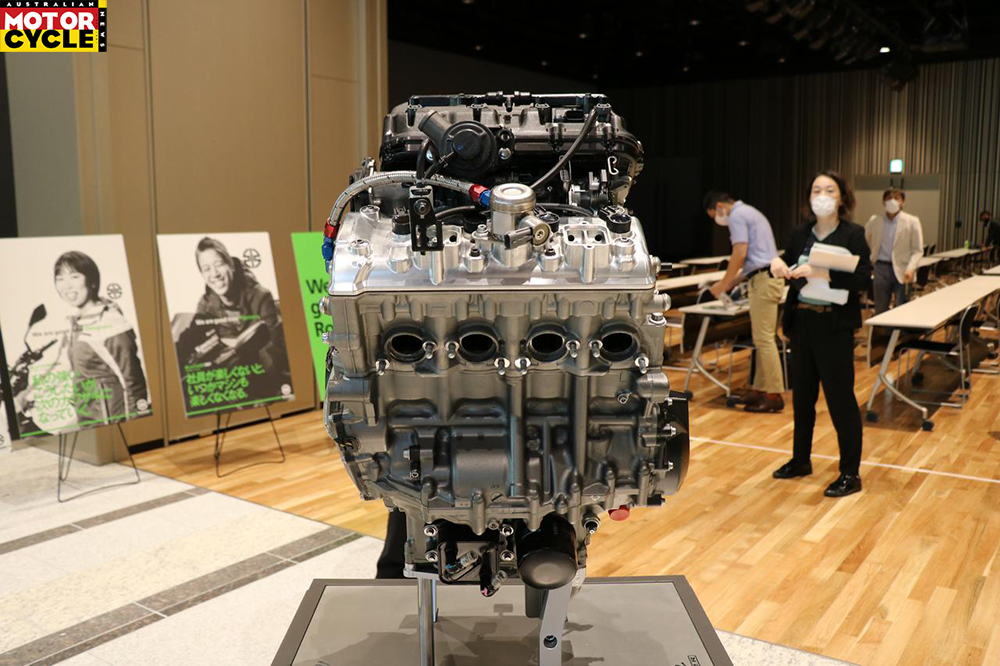 Once direct injection is perfected, it will become simpler to switch to hydrogen power, although there will still be hurdles in terms of the hydrogen tank itself and the refuelling system, not to mention the fact that there’s no network of hydrogen filling stations. However, Kawasaki as a whole already has a hydrogen-focussed strategy in some of its other businesses, including the shipbuilding arm which is working on a room-scale hydrogen-fuelled combustion engine for future cargo ships, and the aerospace division which is involved in a project to develop hydrogen-powered airliners. 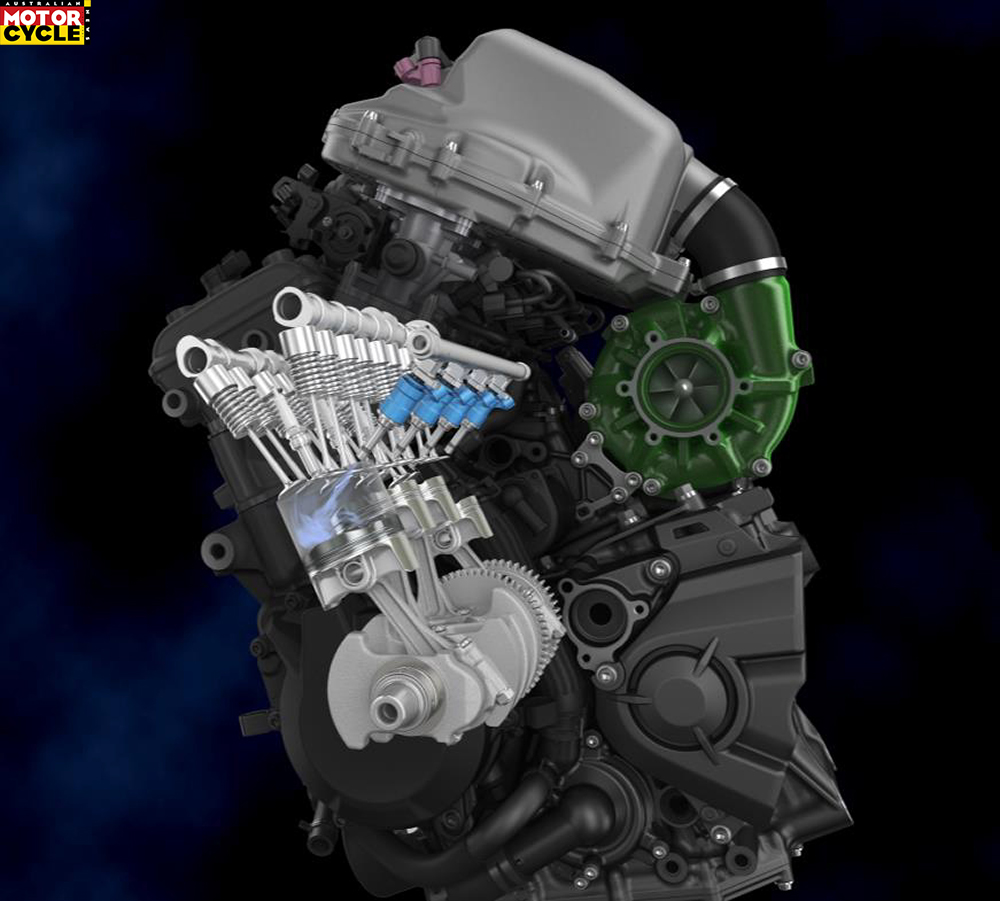 Kawasaki’s motorcycle division, previously called Kawasaki Heavy Industries Motorcycle and Engine Company, has now become Kawasaki Motors, and the whole company has adopted the River Mark logo that was first reintroduced on the Ninja H2 in 2015.

The River Mark, which is a stylised version of the Japanese symbol for river, part of Kawasaki’s name, was first used as a logo on the original Kawasaki ship building company as far back as 1878.