Like the dinosaurs, the Amazonas was born enormous and has since disappeared. But a passionate craftsman is trying to rekindle the flame of Brazil’s forgotten myth

The word love is tattooed on his left arm. “Near the heart,” he likes to repeat. On his right arm, it reads hatred. “Because this is the arm I use when I get mad.”

Considering the guy’s 125kg size, how can I laugh at his nickname Lindão (‘cute thing’ in Portuguese) without taking any risk?

José Horacio Porto has an typical look of a outlaw biker. His large body is a parchment which reveals visceral passion for Harley-Davidson and for his country; ‘Brazil’ is inked in large letters along his spine. However, born from a Syrian mother and a Yugoslavian father, Lindão doesn’t have any Brazilian blood. The patriotism implanted under his skin is for Brazil’s only motorcycle: the 1600 AME Amazonas. It was baptised ‘motosaur’ in 1978 by the motorcycle press since it has long been the largest motorcycle in the world and the first with a reverse gear. It disappeared in late 1988 before it was replaced three years later with the fully-faired Kahena, with what was hoped to be more conventional styling – though few agreed – and in 2001 the death knell sounded for the Brazilian adventure.

“Because no one in Brazil gives a shit to national stuff,” declares Lindão. “All they want are imported motorcycles.”

The motosaur took advantage of an time when Japanese bikes in Brazil were mostly low-capacity commuter machines and the Amazonas made sense for riders chasing cubes and girth. But the arrival and subsequent popularity of Honda’s CBX 750 made life hard for the Brazilian-built machine. By then, around 650 Kahena-branded machines had rolled off production lines, mostly for export, and some still run in Europe today.

As for his ancestor, the 1600 Amazonas it was mostly confined to Brazil’s domestic market and around 450 examples were registered in Brazil. Its rarity makes it a coveted object in Europe, the USA and Japan. In fact, three Amazonas sit in Tokyo’s biggest motorcycle museum. 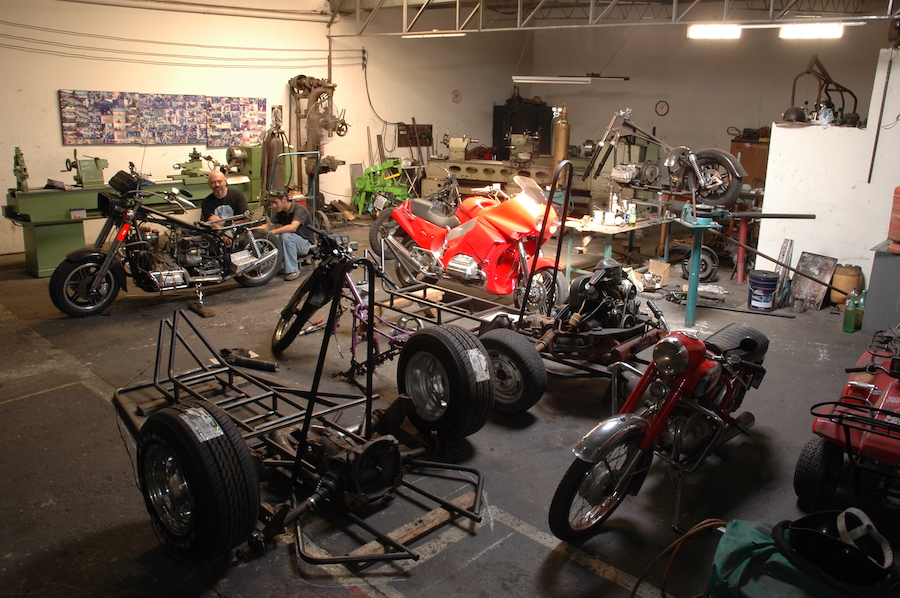 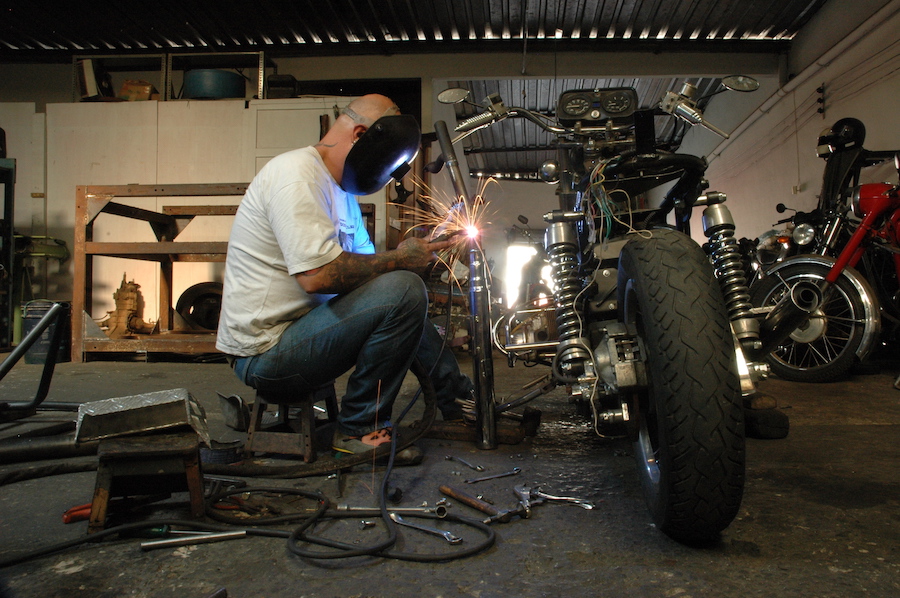 Made in Taiwan. Almost.

The designers of both the Amazonas and the Kahena seem to have disappeared into the wild. José, now the brand’s official specialist, receives requests from all over the world to both restore and build new versions of the charismatic 1600 AME. If you want one, he’s the man.

On demand, he produces a replica of the original 1978 Amazonas, equipped with a semi-rigid chassis which he calls TMA , after the name of his company <i>Tornearia Mecanica Amazonas<i>.

From within his workshop located in Bauru, an inland town of São Paulo State, a TMA is suspended from the roof as an Amazonas begins its transformation out of extinction. The beast will receive a personal touch, a turbocharged 1500cc Volkswagen engine capable of 120 horses. A Taiwanese investor contacted Lindão to finance the production of the TMA at small scale, and with a handsome salary, but our man refused. He would have had to expatriate himself to the rebel island, leaving his family first and his mother land but, despite his hard exterior, José is a relatively introverted man who adores his family.

What he likes most is to go to his workshop so that “nobody comes to break [his] balls!” He distrusts the people he calls ‘gringos’, those foreigners who have bled South America.

“You’re the first gringo I’ve seen always in a good mood,” he smiles. “Those who call me are often stressed.”

The luck smiles to me when a 1600 Kahena arrives from the capital, Brasilia, for a complete overhaul. They are rare, even in this country, and two years have passed since my last encounter with such a monster. It was in Sao Luis, on the coast of Maranhão State. Its owner, Cachorrão (big dog in Portuguese), entrusted me take his 1998-model Kahena for a quick ride. I remember that the single pneumatic shock absorber pumped completely under deceleration, revealing the inertia of moving parts in this huge engine. 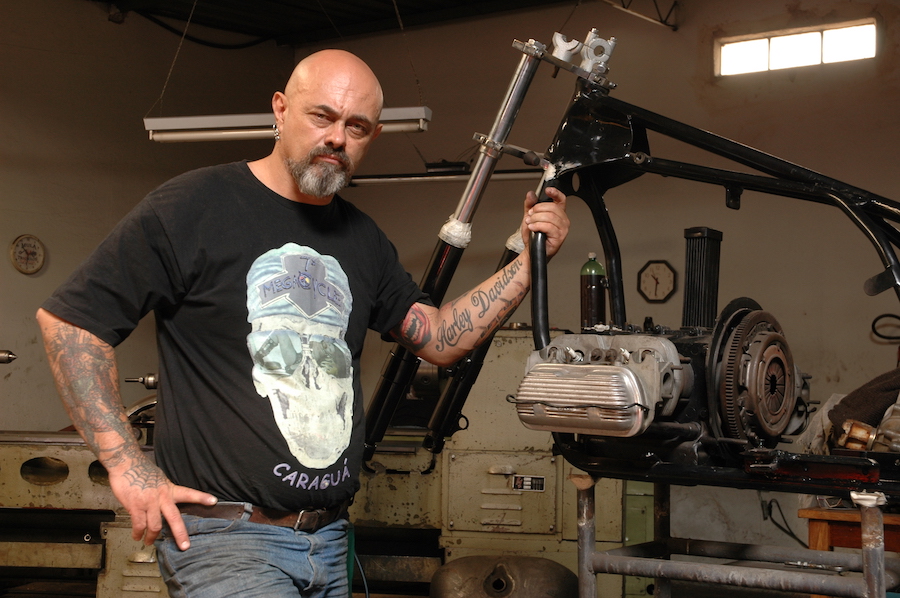 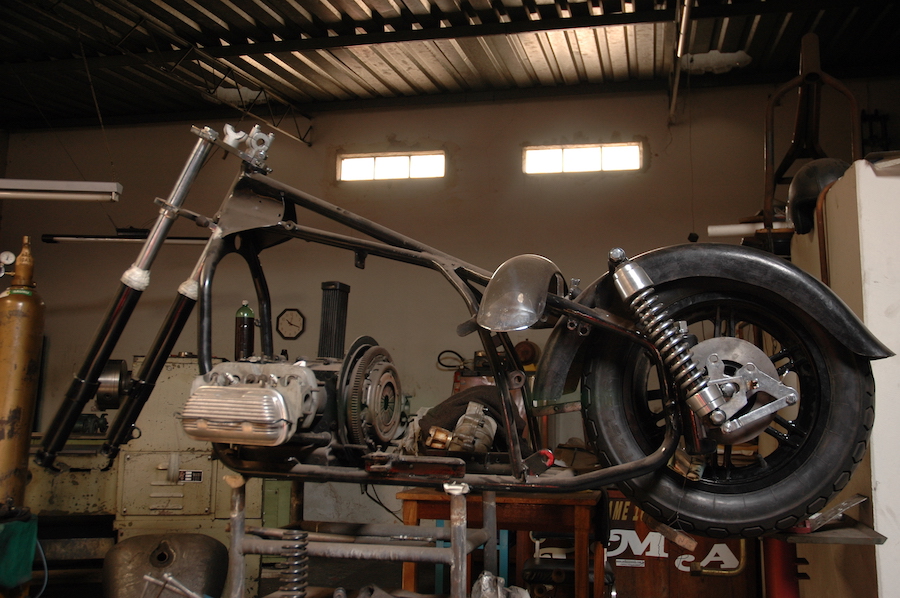 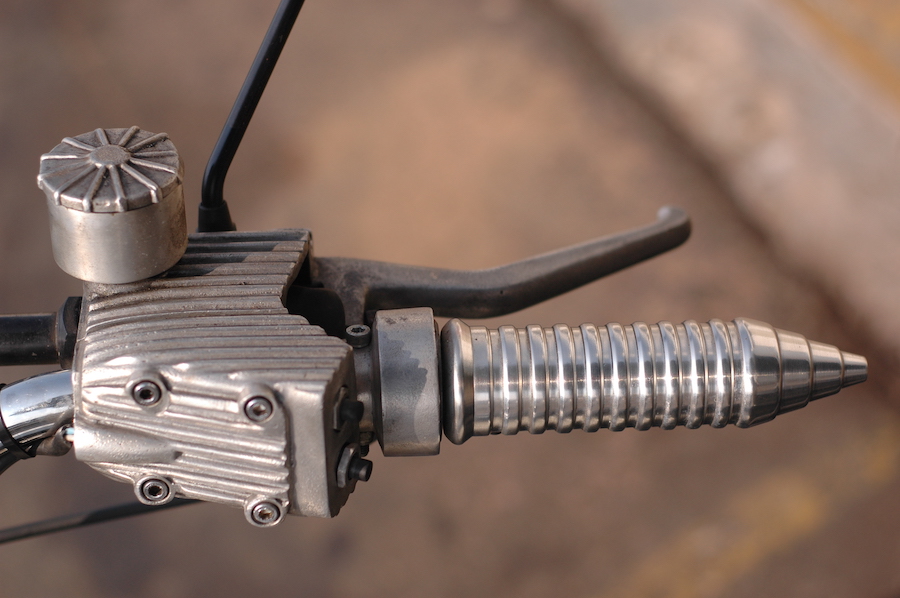 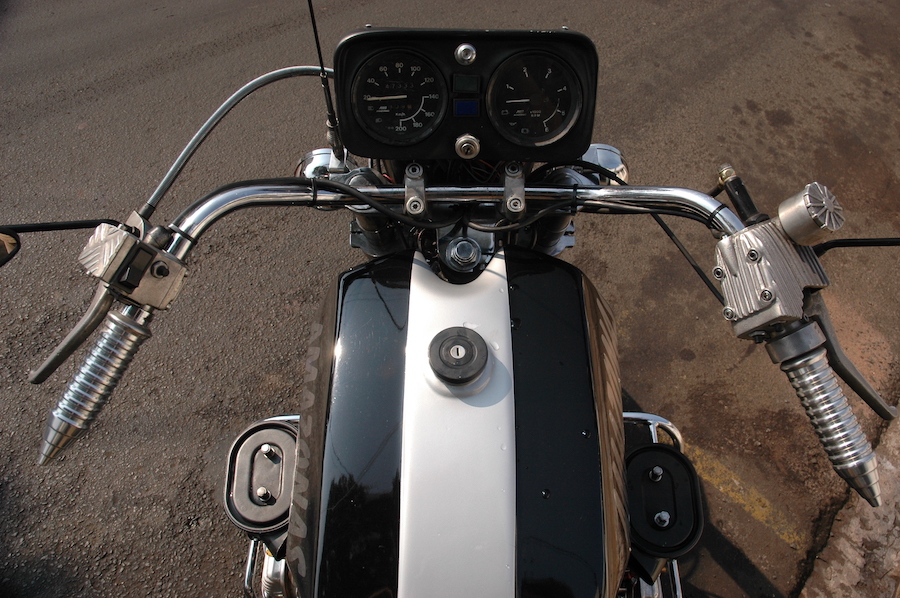 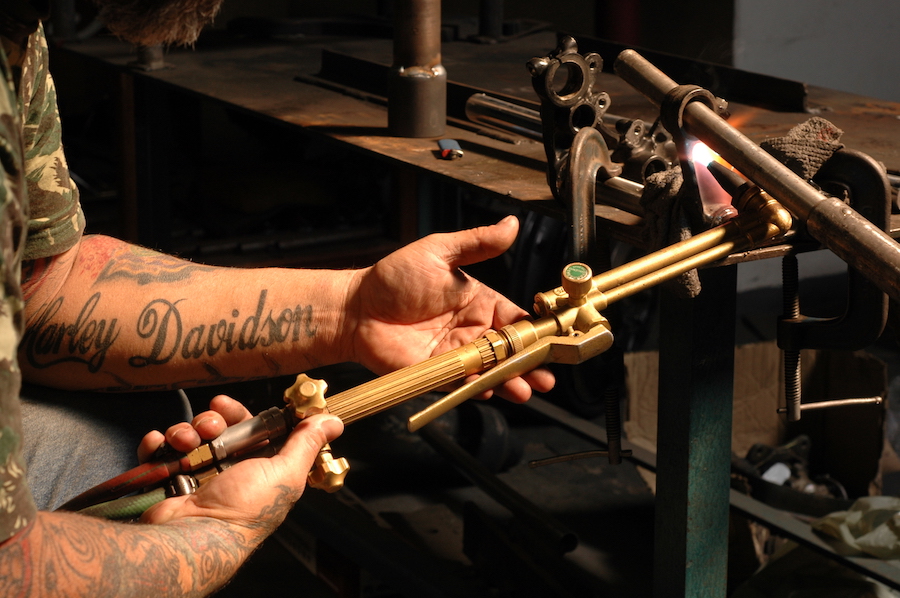 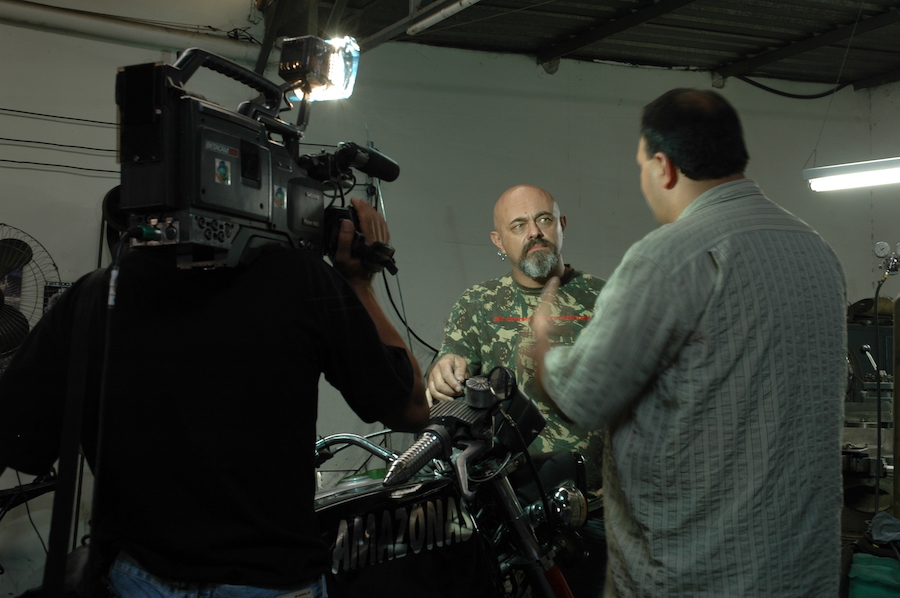 A Porsche engine in a Jurassic frame

José is restoring a 1982 1600 AME Turismo which he needs to have finished before the impending weekend so he can ride it to a rally in Ourinhos.

“You’d like to come with me?” Of course, there’s no need to ask. During the week, I immortalise the evolution of the build through photographs. Despite his messy workshop, José work and attention to detail remains meticulous.

“I used to be a truck driver and my colleagues have called my customised 38-tonne rig Lindão,” he offers, revealing where his nickname originated from. These days, José has made himself a specialist of manufacturing frames for two- or three-wheeled motorcycles powered by Volkwagen engines with different displacement. You name it: 1300, 1500, 1600, 2000 or 2500cc fuel-injected options good for 140 horsepower. He can push that out to 160 ponies by adding a turbocharger, celebrating a forced wedding between a Porsche engine and a Jurassic frame.

Everything is made at the TMA workshop: from the rims to the beautiful steel teardrop-shaped tank – even the front fork is homemade. The well-equipped workshop is full of specialist equipment: a lathe, mill, pipe bender, drill, hydraulic press, an iron foundry and a welder.

Television reporters have arrived to interview this talented and passionate craftsman where, with the cameras rolling, Lindão brings the 1600 Amazonas to life. The engine noise is unmistakable – close your eyes, it’s a Volkswagen Beetle. But the timing of its revs are strangely abnormal. Jose put his hand on the 32mm Solex carburettor which feeds the monster, with the softness of a mother calming her sick child. Half-turn of a screwdriver later, the boxer engine settles and sounds perfect. Thirty years of experience will always make the difference. 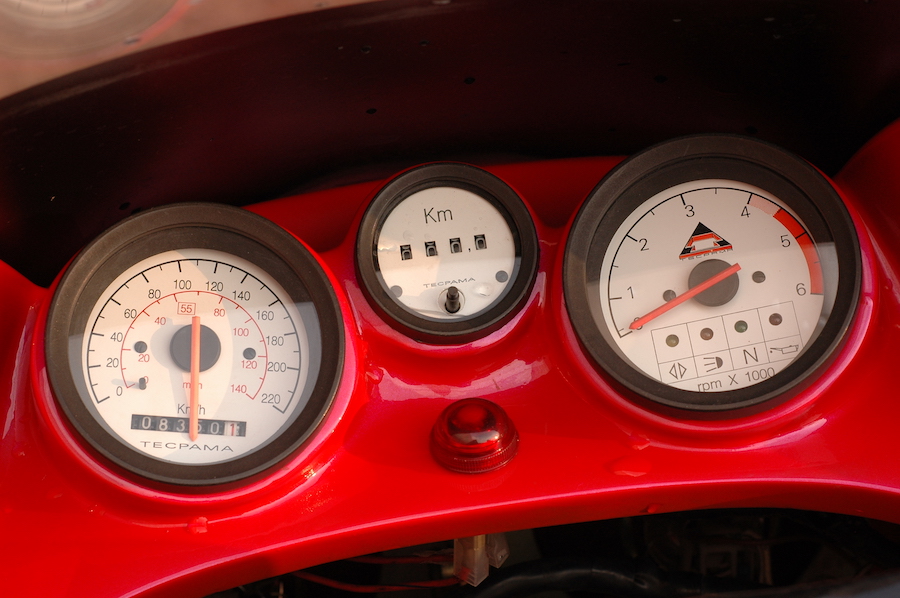 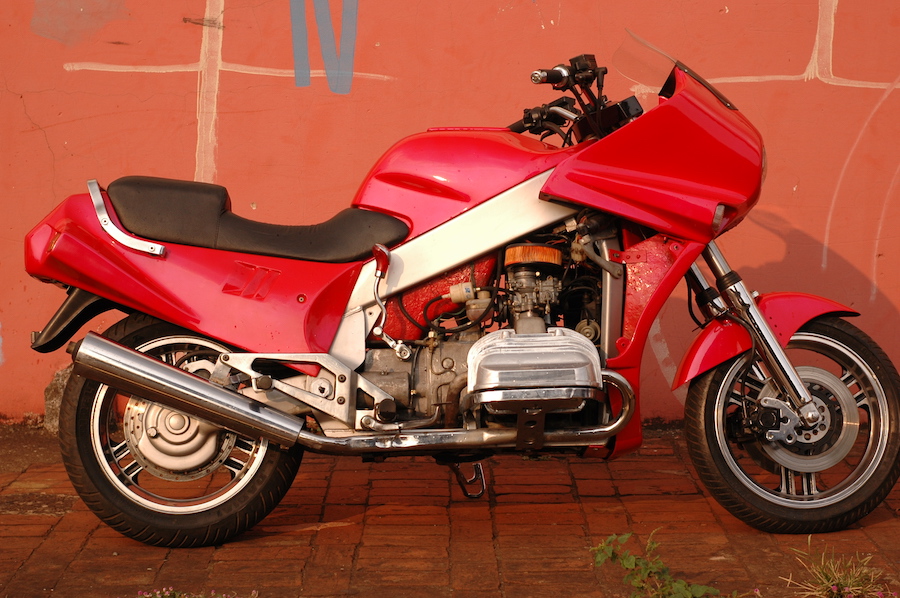 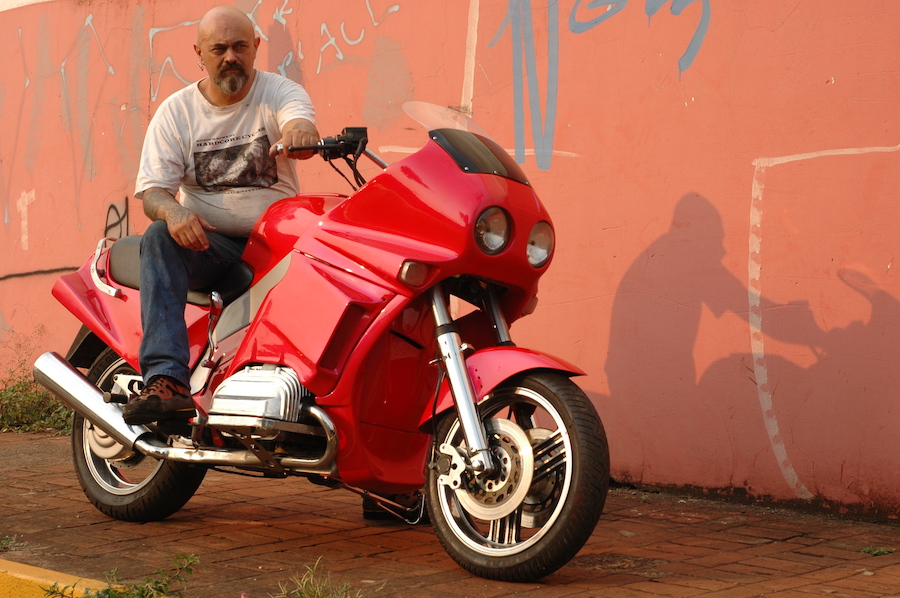