Three-quarters of a century ago, Vespa invented the moped. Now, in many ways, it’s doing it again

Conceiving a product which has literally changed the lives of billions of people is the achievement of only a few, but in 1946 Italian aeronautical engineer Corradino D’Ascanio did just that by inventing the motor scooter. He did so for aviation company Piaggio, whose fighter aircraft factory at Pontedera, near Pisa, had been demolished by Allied bombing during WW2. No longer able to build planes, owner Enrico Piaggio decided instead to address the urgent need for affordable transportation in war-ravaged postwar Italy, and the Vespa was the result. Since then, over 16 million Vespas have been made to date in as many as thirteen different countries. But more to the point, this iconic Italian product has spawned literally billions of copies globally, each providing affordable convenience and personal freedom to its users. Now, almost 75 years after its birth, the Vespa has been completely reinvented via a change of propulsion from combustion to electric, with the Vespa Elettrica officially debuting at last November’s EICMA Show. Costing €6,390 in Italy, it’s the EV equivalent of the 50cc Vespa Primavera, and is already on sale in Europe and North America, with Asia and Australasia up next. That’s the same price as Vespa’s much bigger and faster GTS300, but with the important difference that ownership post-acquisition is far more economical. A full recharge of its 4.2kWh lithium-ion battery costs just one Euro ($1.50), according to Piaggio, and with a claimed range of 100km available from a single charge, that’s just one and a half cents a kilometre in running costs. 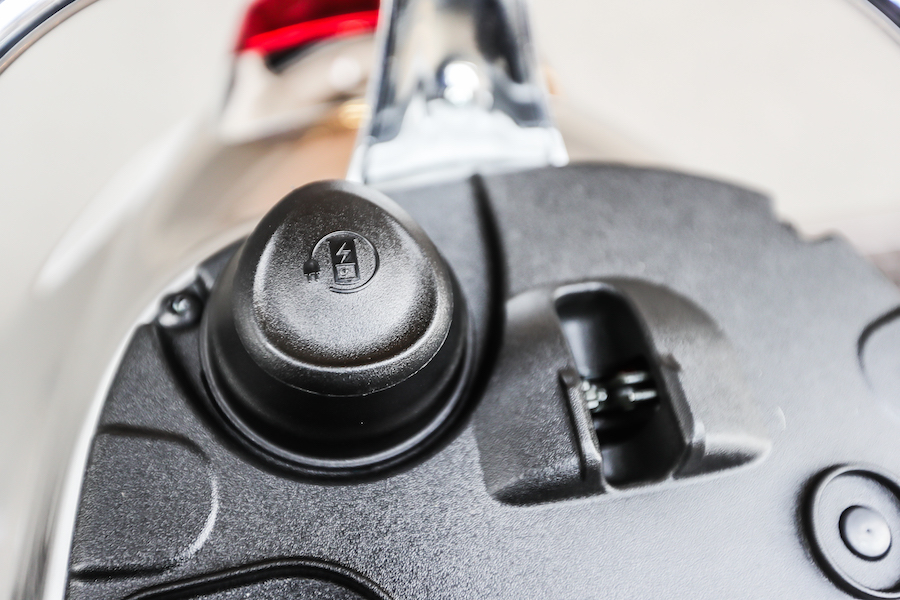 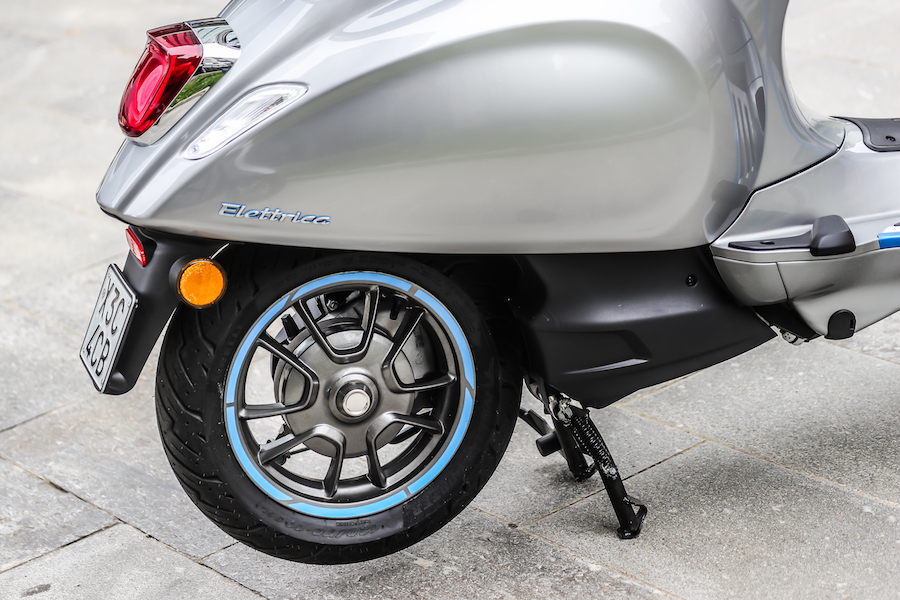 With an air-cooled 48V motor in the rear wheel delivering peak power of 4kW (equivalent to 5.36 hp), but also a hefty 200Nm of torque on tap from 1 rpm, the Vespa Elettrica outshines its 50cc Primavera sister in terms of performance, especially under acceleration and in hill starts. However, top speed is limited under Italian law to 45km/h in Power mode, and to 30km/h in Eco mode, which also offers more gradual acceleration.

There’s a surprising weight advantage over the 115kg (dry) Primavera 50, with the Elettrica scaling 102kg – at all times. This is stopped via its 200mm hydraulically operated single disc brake up front, and the 140mm single leading-shoe drum in the 11-inch rear wheel. This is downsized from the 12-inch front to deliver crucial extra space for the underseat storage compartment which accommodates an open-face helmet. Specially developed Pirelli Angel Scooter tyres are each mounted on three-inch rims, with a 110/70-12 front and 120/70-11 rear, and suspension comes courtesy of a single-sided coil-spring front end strut with hydraulic damping, and a monoshock rear damper. That low weight includes the 86Ah battery positioned down just in front of the rear wheel, within the same sheet-steel monocoque comprising the E-Vespa’s chassis as on the Primavera 50. Here, that’s further stiffened by the battery housing, with everything clothed by the same dainty-looking traditional Vespa styling as on the Primavera. Here, this has a fresh look thanks to the idea to offer the Elettrica painted only in metallic grey, but with the edges of the bodywork, the rims of the diecast aluminium wheels and the seat trim all picked out in one of six contrasting colours – blue, yellow, green, chrome, charcoal or black.

Manufactured by Piaggio using LG cells imported from Korea – the same ubiquitous 18650 cylindrical lithium-ion cells used in everything from laptops to smartphones – the Elettrica’s battery powers a motor built to Piaggio’s design by Rimini-based Lucchi, with direct gear final drive to the rear wheel, rather than by belt. Piaggio claims the battery is fully efficient for up to 1000 full charging cycles, which translates to a range of 50,000 to 70,000km, and represents around 10 years of use for a vehicle intended for urban commuting. 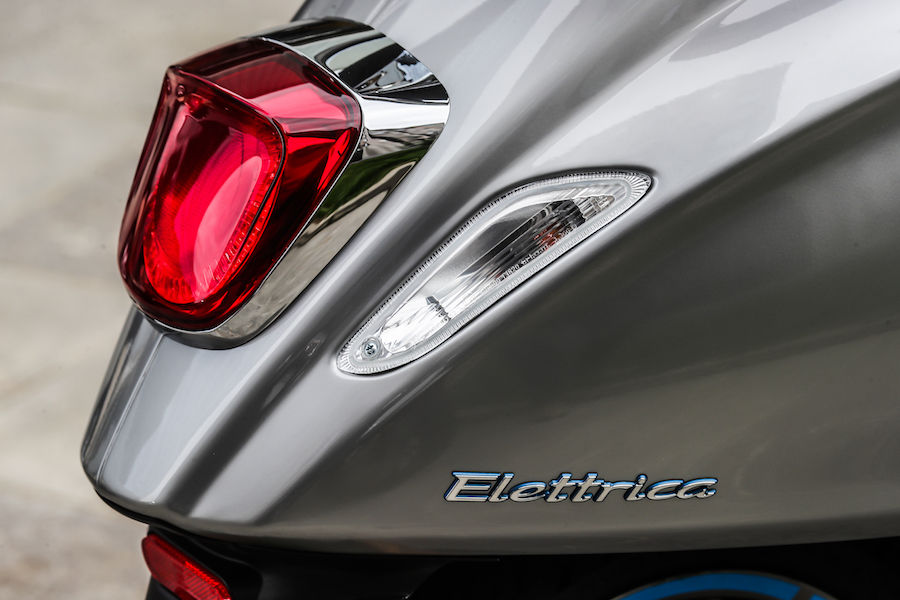 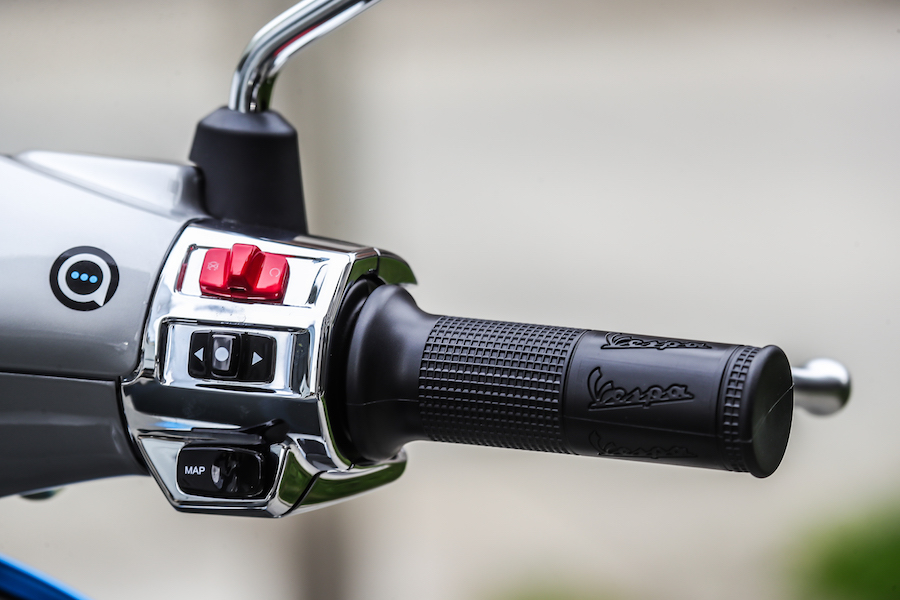 And even after the one thousand charging cycles, the battery will still maintain a claimed 80 percent of its capacity. The inverter (aka controller) was also designed by Piaggio and is made in Italy, too – a key issue according to Piaggio’s Head of Product Development Antonio Cappellini, whom I travelled to Piaggio’s Pontedera HQ to meet, before taking the Vespa Elettrica for a spin around the streets of nearby Pisa.

The Vespa Elettrica has a claimed maximum range of 100km in the urban use for which it’s designed (80km in the unlikely case of the throttle being held wide open for the duration of the charge), with a claimed four-hour recharge time from zero to 100 percent via the onboard cable housed in a compartment beneath the seat, plugged into a standard household socket. Besides that there’s also a two-stage regen capability, to recharge the battery during deceleration and braking. Hopping aboard the Elettrica revealed a typical Vespa stance seated upon the comfortable 790mm high seat, with lots of footboard space for my size 43 feet. But while there’s a pair of footrests and a grabrail for a passenger there’s only a little space on the seat for a pillion, whose extra weight would presumably also reduce performance. To start proceedings, turn the key in the lock just in front of your right knee, and the good looking 4.3-inch colour TFT dash illuminates. This is always easy to read thanks to the twilight sensor which adapts the background and colour of the characters to the light conditions as well as four adjustable brightness levels. The centre of the screen shows the speed, selected riding mode, residual range in km and remaining battery charge level, while the power level being employed and the energy used or recovered during the ride are indicated on either side. 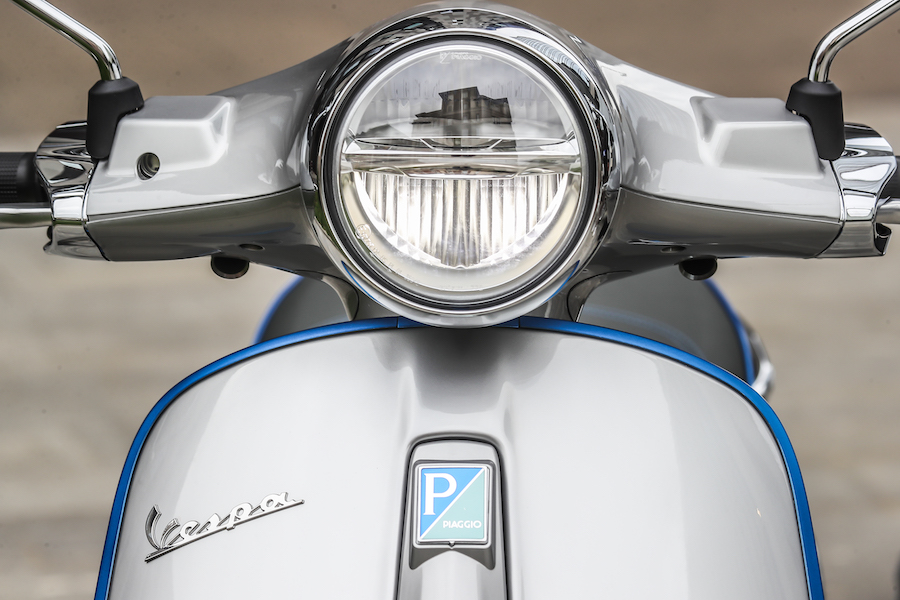 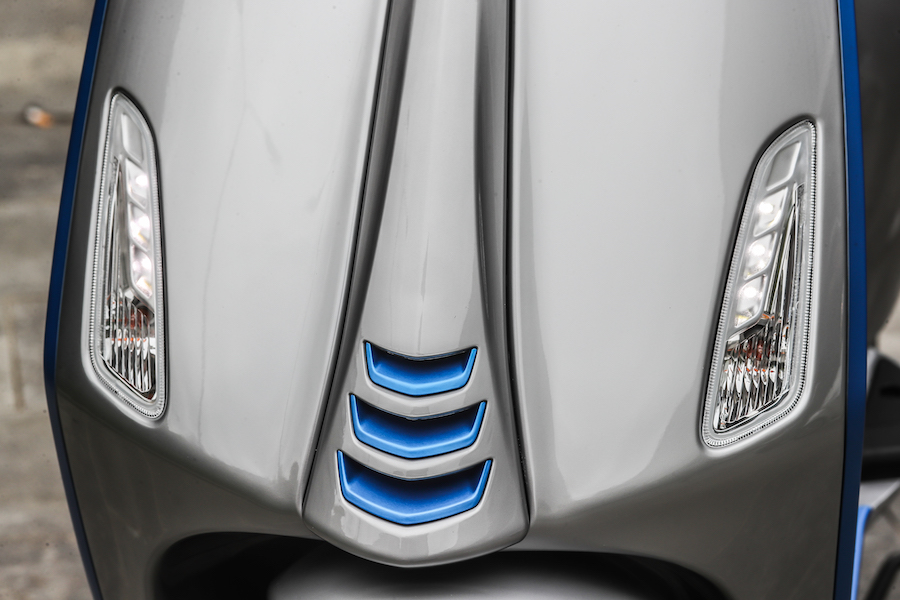 But using the dedicated Vespa App on your smartphone and connecting it to the Elettrica via Bluetooth lets you take full advantage of the display’s capabilities in terms of monitoring incoming calls and messages, trip time and distance, battery charge use percentage, statistics on the last 30 trips, number of recharge cycles carried out, and much more. The system also lets you use the handlebar control buttons to answer calls and to use the smartphone’s voice commands to make calls or play music from your own playlist. But to access these features on the go, you have to buy the dedicated helmet with built-in earphones and Bluetooth intercom from the Elettrica’s accessory catalogue.

Having unlocked the E-system, press the middle button in the right control block, wait for the Ready light to appear in the top right corner of the dash, then twist – and go. You can thumb the Mode button on the same block to switch between Power and Eco modes on the move, or once stationary to select Reverse. Even with the light weight of the relatively diminutive E-Vespa this is a convenience not to be scorned, especially when backing out of a parking slot. Read the full story in AMCN Magazine Vol 68 No 19