HOW THEY ROLLED: 1996 AUSTRALIAN SAFARI IN AN OUTFIT | LOOKING BACK

Twenty four years ago, two blokes went and did something no one had ever successfully done before, or since

Ayers House, Adelaide’s upmarket exhibition venue, was packed. Top European motorsport correspondents mingled with the local press for the media launch of the Australian Safari, an event which, in its first decade, had earned a reputation as the Dakar Down Under. And this, the 1996 edition, was to be the deciding round of the FIA World Cup; a tie-breaker between Italian Franco Germanetti and Frenchman Jean-Pierre Strago.
In the Moto division, four-time Paris Dakar champion Edi Orioli (Yamaha) was expected to fight it out with KTM’s Heinz Kinigadner, winner of the 1996 Beijing Master Rally. Enduro World Champion Robert Gronlund (Suzuki) would complete the podium. Aussie sport commentators hadn’t quite come to grips with the notion that women could ride motorbikes, so rising star Jutta Kleinschmidt was completely overlooked; as were local guns such as John Hederics, Steve Riley and Glenn Hoffmann. 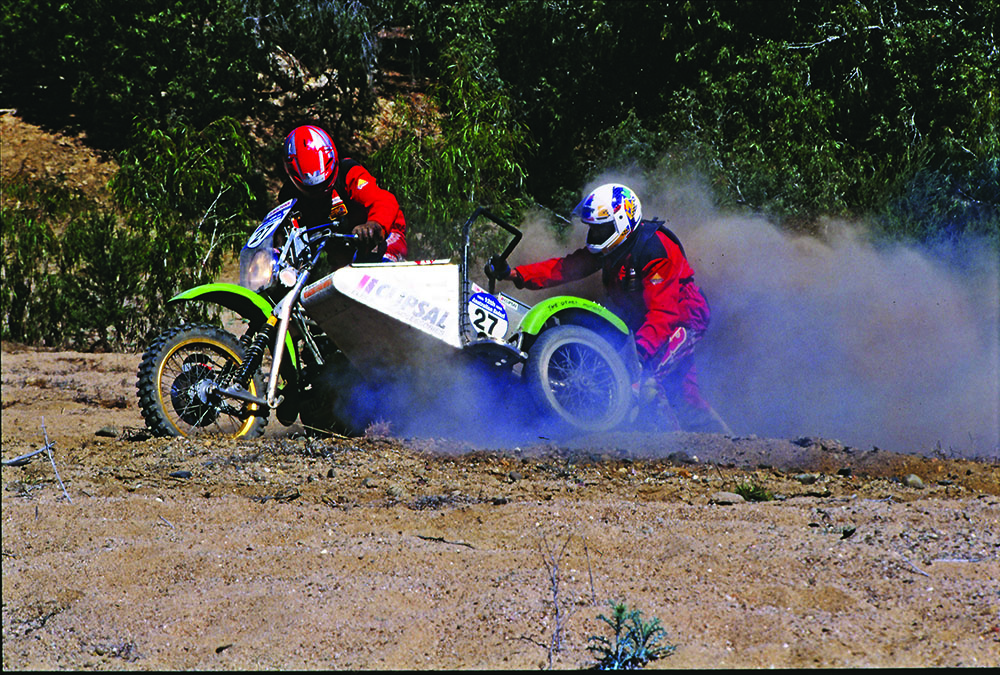 Somewhere in the display of brightly stickered motos was an unusual three-wheeled contraption that couldn’t possibly be overlooked; an entrant in a three-legged novelty race that had rolled up to the start of a marathon. Even the more experienced enduro riders were bemused by the notion of two riders on a single machine. And when it was explained that one of the riders would remain on his feet for the entire eight days of the rally, the commentators were incredulous. “Nuts” was the only comment fit to print.

Considered all but extinct, off-road sidecars had disappeared from the Safari’s entry lists after the first event, and sidecar teams who regularly competed in events such as the Barossa Valley’s legendary 24 Hour Trial considered the Safari an impractical budget breaker. But Des Chabrel [see sidebar] had not forgotten his disappointment in being forced to retire from the inaugural Wynn’s Sydney to Darwin Safari. And nor had his mate Colin Daddow, who’d suffered his own DNF on a Yamaha Ténéré in that same event. 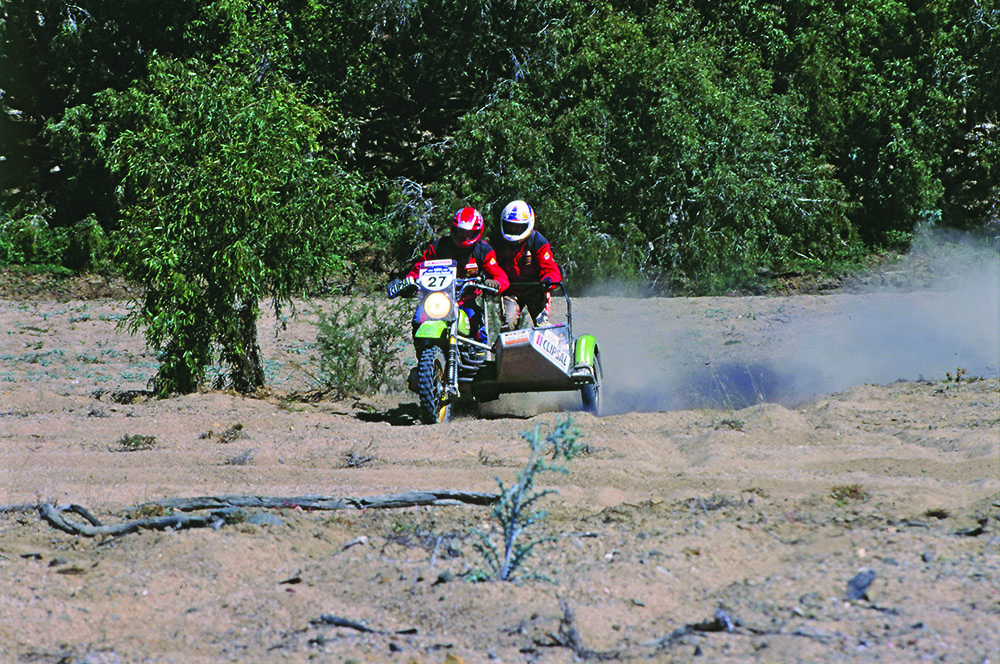 An English chassis, a Japanese engine and a couple of tough Aussies went the distance

Now, a decade later and in the first of a serendipitous series of circumstances, the start of the Safari had been relocated to Wirrina Cove Resort just down the road from Des and Colin’s home town. Then, out of the blue, South Australian Kawasaki Distributor George Bolton offered up his race-proven KZ750-powered WASP, throwing in a wrecked Kawasaki GT750 to upgrade the WASP’s brakes. In the hands of another old mate Chris Lang, Bolton’s four cylinder 57kW WASP had a 100 percent finishing record in several consecutive 24 Hour Trials. The Safari challenge was right in their faces.

With Chris steering, Colin swinging and Des on the spanners, they had more than 60 years of sidecar experience between them. Now all they had to do was raise the equivalent of $30,000 in today’s money. Of course George Bolton came to the fore along with regular sponsor Clipsal, but the boys had to dig deep, work the phone, and twist a few arms.

Then there was the entry itself. Chris received a warm reception from Safari Event Director Bob Carpenter. As long as the team were prepared to run in the Moto Division they were welcome. They were all very much aware that none of the four sidecars that started that long-ago Wynn’s finished. So they had some idea of what they were up against. Sort of. Carpenter volunteered the information that almost all the competitive stages of the 1996 event were over tracks established by a Toyota LandCruiser. And that the team would be well advised to construct their outfit to an identical width, thus avoiding the inevitable bumps that build up in the centre of a typical outback track. 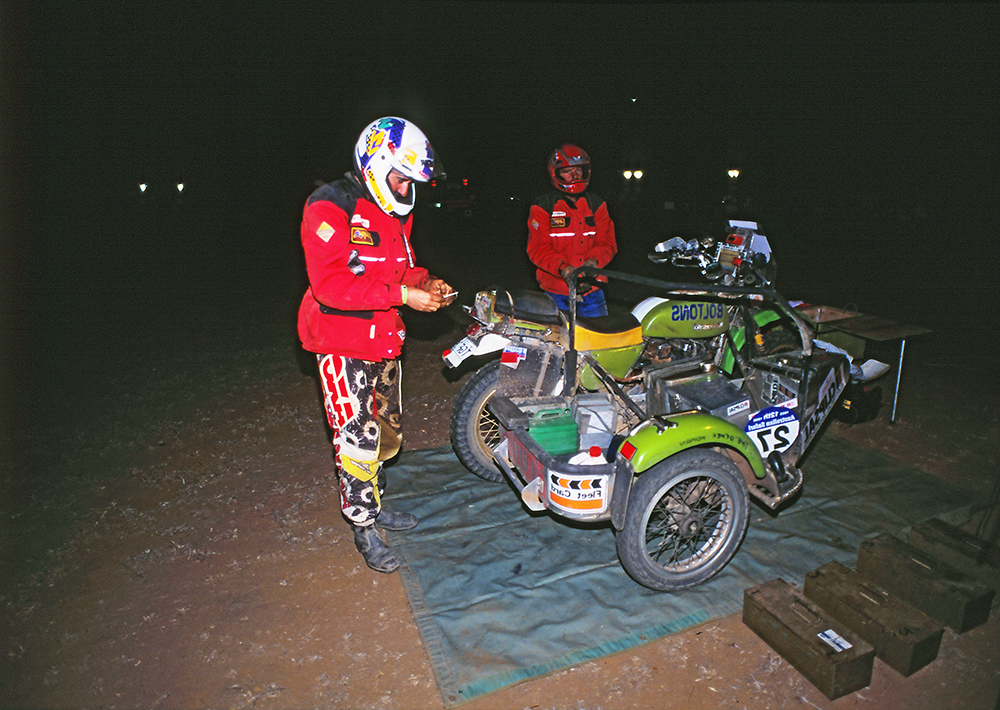 While they appreciated the thought behind Bob’s advice, the team were vastly experienced in negotiating 4WD tracks and were aghast at the thought of desecrating a bespoke WASP chassis – certainly one on loan from their sponsor. They figured the biggest problem was the requirement to carry sufficient fuel to cover 350kms. The original tank pirated from a Suzuki was retained, with sponsor Hughes Precision Engineering crafting a 20-litre tank for the sidecar chassis. A further eight litres was housed in a tank fitted to the pillion seat for a total of 41 litres. Yet they remained acutely aware the fuel range was marginal, given the power sapping terrain they expected to encounter on a unit weighing the best part of 450kg with both crew members on board.

With almost the entire moto field rubbered up on the traditional 21-inch front and 18-inch tyre combination, the WASP was an outcast with its 19-inch front, 17-inch rear and 16-inch sidecar tyre. Nor did it have any chance of borrowing spare wheels/tyres from other competitors. Little details, such as the need to carry imperial as well as metric tools, were all covered in their extensive preparations. Despite the naysayers and the knockers, Chris and Colin rumbled out of Wirrina Cove unheralded as Des sprinted for the bus reserved for service crew.

It was not a good look when the WASP’s sidecar wheel abandoned ship in the remote sand dunes west of Lake Gairdner, forcing Colin to scrounge a temporary locknut and spacer from the recovery crew, and providing more ammunition for the piss-takers.

But that was the least of their problems. Coober Pedy offered Des the first opportunity to calculate fuel consumption after a full day in race conditions. The numbers were not good, and there was no obvious fix to prevent the bank of four Mikuni carburettors from the incessant clouds of bulldust clogging the modified Kawasaki Z900 airbox. The highly tuned 9500rpm powerplant was not designed to lug 300kg across 10-metre sand dunes, no matter how hard both riders pushed. Fuel consumption soared and would be a constant inhibitor whenever Chris felt the need to drop a gear and twist the throttle.

The locals in Townsville gave the duo a hearty welcome

They determined the full extent of their fuel range the very next day. After traversing the extremes of the Painted Desert, where they’d lost time replacing the tube in the sidecar tyre, they unexpectedly came across the Ghan rail line, which wasn’t on their route instructions. It was only a minor diversion according to Chris, and a quick about-face had them back on the notes. But it cost time and, maybe, just a cupful of precious fuel.

These delays may have resulted in a little injudicious use of the right wrist and, as the sun set, both supplementary tanks were empty and the main one on reserve. Only by undoing the front mounting bolt did they force the last drops to the rear mounted fuel tap. And only by extreme good fortune did they roll into the Kulgera bivouac. Despite constant attention, air-filter problems were to plague the team all the way to Townsville.
As the Safari pushed further into the Northern Territory, the afternoons became hotter and some of the long, gravel liaison stages became tedious. Chris could at least move his arse around a little on the seat and put his feet up on the engine. Colin, on the tiniest, most uncomfortable seat in Safari history, a vinyl-covered armrest off an office-chair bolted directly to the chassis, was far happier standing.

Many competitors, including Edi Orioli, had already dropped out, most of the attrition being mechanical, with autos suffering worse than the bikes. Shortly after roosting out across the Tanami Desert from the lush Tilmouth Well oasis, Heinz Kinigadner came to grief while attempting to make up time after taking a wrong turn. ‘Kini’ had already been medi-vacced out by the time Chris and Colin passed the scene. But all was not well. 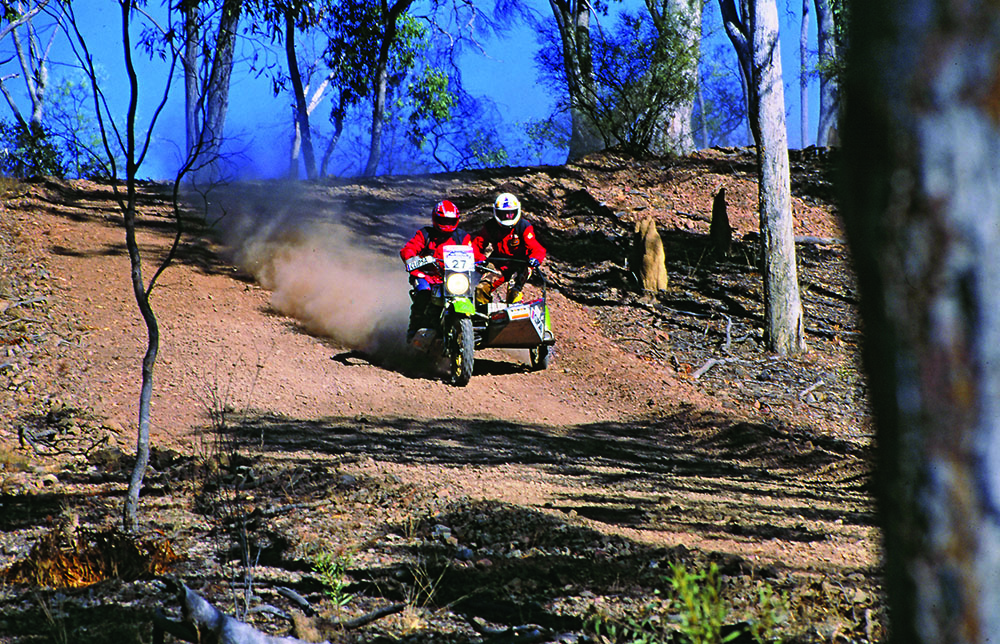 With tyres inflated well above 30psi to avoid punctures, a rushed bacon and egg roll at dawn, followed by 700km of corrugations, Chris was feeling crook and Colin was still happier standing. Meantime, Des had arrived at the old WW2 Ooratippra airstrip well before the competitors
“The ground turns to bulldust the instant two vehicles pass over the same spot and we arrived with three road trains, three buses and around fifty support vehicles before the first competitor rolls in,” Des noted that day in his diary.

“I set up a service area near the welding bay to get good light to work by, tied my groundsheet to a bush and tried to take a nap, but [the dust] was too oppressive.”
However it was at Ooratippra, the isolated homestead on the southern reaches of the vast Barkly Tableland, where Des, Colin and Chris were affirmed as part of the great Safari family. As the bivouacs become more remote, the remaining faces become more familiar, contestants became comrades bearing a mutual recognition of the hardships they’ve overcome. A curt nod is an acknowledgement of a shared accomplishment and, except for a few guns at the pointy end, the results irrelevant. All that matters is ensuring the equipment will survive another day’s torture.

Of course the car crews still thought the ‘outfit guys’ were crazy, one wit likening the outfit in action as somewhat resembling a praying mantis in the throes of ecstasy. Then again the car crews always thought all the bike guys were a sandwich short of a picnic. But few competitors of any persuasion had considered the sidecar entry as any more than insanity on three wheels. Now, five days and almost 5000km later, the entire bivouac were fans.
Des was concerned about their lack of sleep, but Chris maintained, despite the increased risk of a DNF, they could go considerably faster. And the closer they got to Townsville, the more unacceptable that became. Chris and Colin were now on top of their game. Relatively smoother, fast sweeping corners with fewer sand drifts suited their style and they slalomed into the Mount Isa bivouac just as darkness fell. The bad news was that their speed was consuming a litre of fuel every seven kilometres. 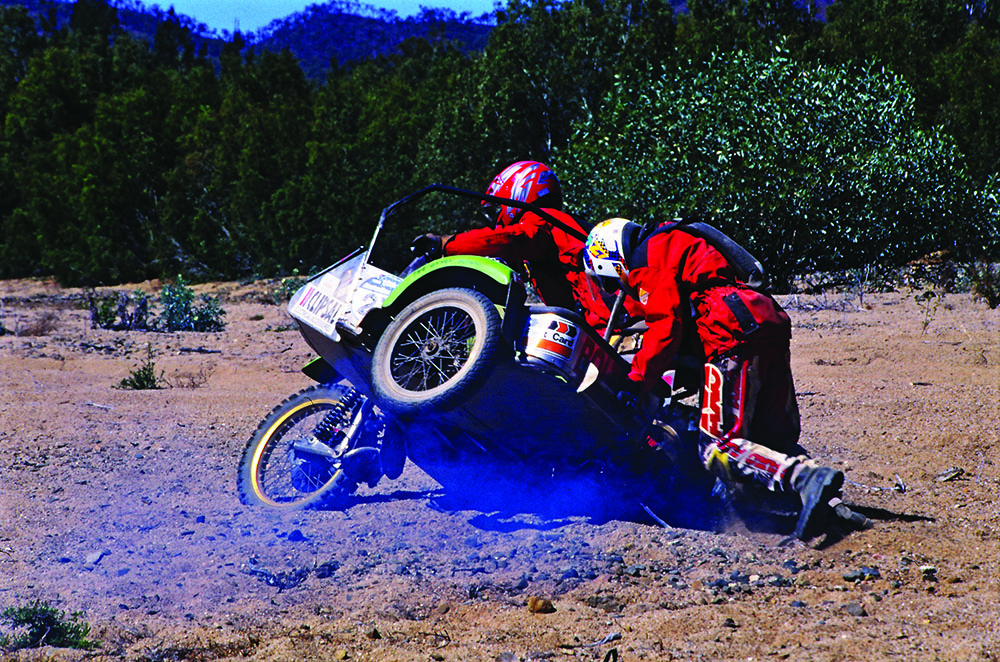 Daddow had to get out and push on occasion…

With shorter distances between refuels as the event zig-zagged across the Gulf Savannah, fuel range became less of a problem. However, despite constantly re-taping the airbox and cleaning the filters, Chris felt the engine was ingesting more bulldust than air. They enjoyed another great day heading toward the Gulf, though with daytime temperatures above 30ºC they could now barely squeeze six kays from a litre of fuel.

At the conclusion of the penultimate day, Bruce Garland was already loudly celebrating his first victory in the auto division, and the would-be moto champion John Hederics was quietly running a spanner over his Honda XR600’s spokes to ensure his all-time record sixth outright win was a shoe-in. But Chris became certain they’d dusted the Kawasaki’s powerplant. Colin and Des did their best to keep the team spirits buoyant and went about refurbishing the WASP’s sponsorship stickers but, truth be told, they were just as concerned as Chris.

Besides Des had been unofficially assured their entry would be present at the official finish, even if it was forced to spend some time on the back of a tray top while Colin overhauled the carburettors. They’d finish one way or the other, but Chris was determined to get the last out of the engine.
The rest is Safari history. The team rolled across the ceremonial finish line to the applause of the huge crowd, most of whom had little idea of the significance of the occasion.

It was an entirely different matter at that evening’s presentation however where, over the top of the usual boasting and bullshit, Chris and Colin were universally acknowledged as the true iron men of the event. The only sidecar team in history to defy the odds and finish an Australian Safari. 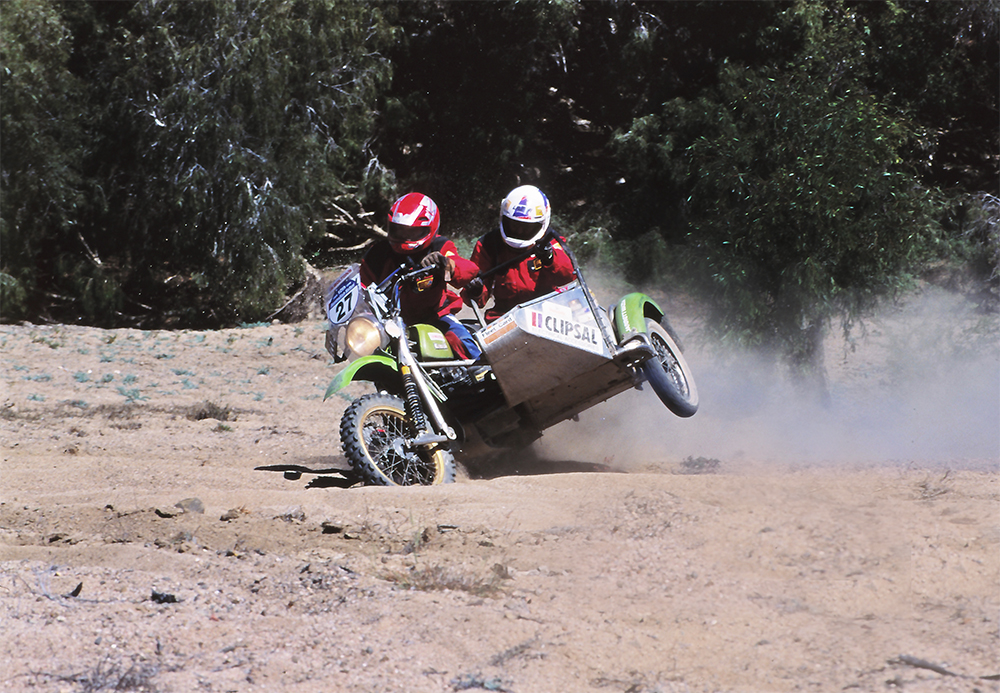