Once upon a time, two-stroke was king. The undisputed champion of piston power per cubic centimetre. Now, despite road-going two-strokes being as rare as rocking horse spit, and even long out of flavour for some dirtbike makers, two-dingers are still the dogs. Kilowatt for kilogram, they’re still the king and, just in case you missed the memo, King Two Ding never abdicated. Shamed for being overly-noxious and often utterly obnoxious, our smokey sage was all-but banished from two-wheels, instead forced onto sleds and skis to reign over the sea and the snow.

It’s saddening to think how many riders have now graduated from grommet to grown-up without ever feeling their bejesus forcibly evicted by the sudden and unexpected SNAP! of a ferocious twoey’s powerband.

Is there still time for two-strokes to reign again before the seemingly inevitable rise of battery power to world domination? We hope so. And, if so, we will owe a major gratitude to Austria’s diehard orange army of buzzbox believers, KTM. Its latest range of enduro bikes has created a storm by opening the long-awaited next chapter in the evolution of high-volume two-stroke motorcycle engine production; electronic fuel injection. But, to understand the future, first we must look at the past.

The clue to the two-stroke’s power superiority over a four-stroke is stated right there in the name. Every time a two-stroke’s piston travels from the top (TDC) to the bottom (BDC) of the cylinder it is a power stroke, whereas a four-stroke has half as many power strokes for the same engine speed. A four-stroke has valves in its cylinder head to control intake and exhaust, and uses the piston purely as a pump to suck fuel in, compress the mixture, then push out the exhaust gases.

A two-stroke piston does all this, but is also used as a valve to control exhaust and intake gases entering and exiting the combustion chamber, via ports in the cylinder walls. This eliminates the need for all the complicated valve gear found in a four-stroke cylinder head, and makes the two-stroke engine far lighter and simpler.

The trick of the two-stroke is in its transfer ports. These tunnels run from the crankcases up to the top of the cylinder, carrying the fresh charge of fuel mixture into the combustion chamber.

Where a four-stroke draws fuel and expels exhaust directly through ports in its cylinder head, a two-stroke draws its fuel into the crankcase area below the piston, then transfers it to the cylinder head via the transfer ports, and finally, pushes the exhaust gas out of a port in the cylinder wall. As the name suggests, induction timing on disc-valve engines is controlled by a disc. As the disc spins in front of the inlet port, a cut-out in the disc opens and closes the port. The disc is usually mounted on the end of the crankshaft, but in some cases a cut-out section of the crankshaft itself is used as the valve.

Like piston-port two-strokes, early disc-valve engines tended to be more abrupt in their power delivery than reed-valve motors (more on those later). However, developments in digital ignition systems and electronic exhaust valves enabled disc-valve motors to regain competitiveness against their reed-valve rivals towards the end of the two-stroke Grand Prix era, helping Aprilia achieve great success with its disc-valve 125s and 250s against its largely reed-fed opposition. A disc valve. Is this what they mean when they talk about a discotheque?

Modern two-stroke motors almost exclusively use reed valves to control the intake of fuel and air. The reeds, which effectively act as a check-valve, are fitted to a wedge-shaped cage in the inlet tract and are usually made of composite materials such as carbon fibre. Although once-common, steel reeds are prone to cracking and subsequent engine damage. The beauty of a reed valve is it uses crankcase pressure to control intake timing, opening when there is negative pressure inside the crankcases, and closing when there is positive pressure. It also opens only as wide as is required for the speed at which the engine is spinning. These characteristics make reed valve engines work more efficiently over a wider rev range than disc-valve or piston-port motors, and therefore have a more linear power delivery. 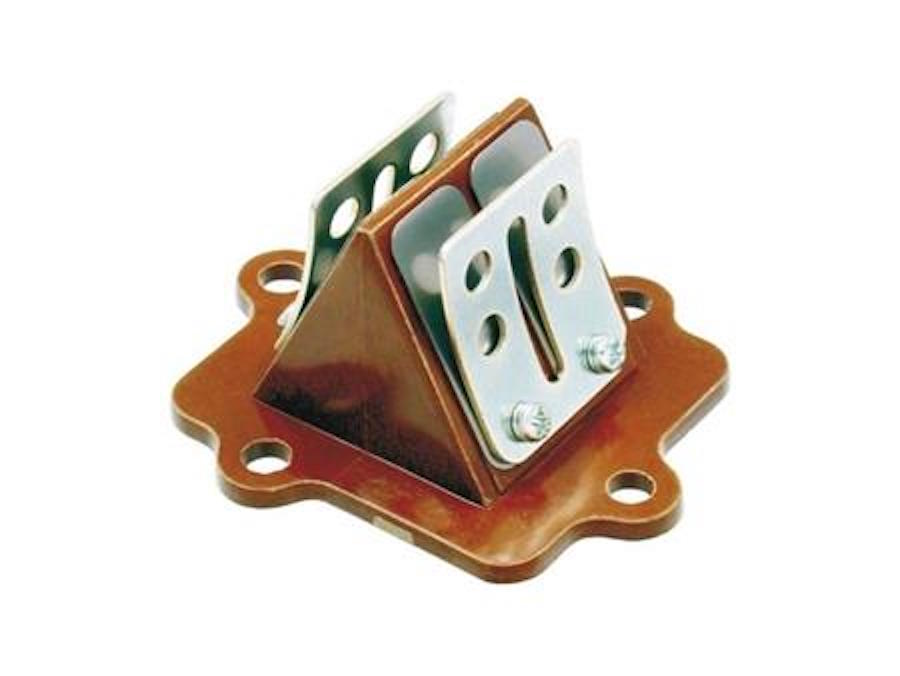 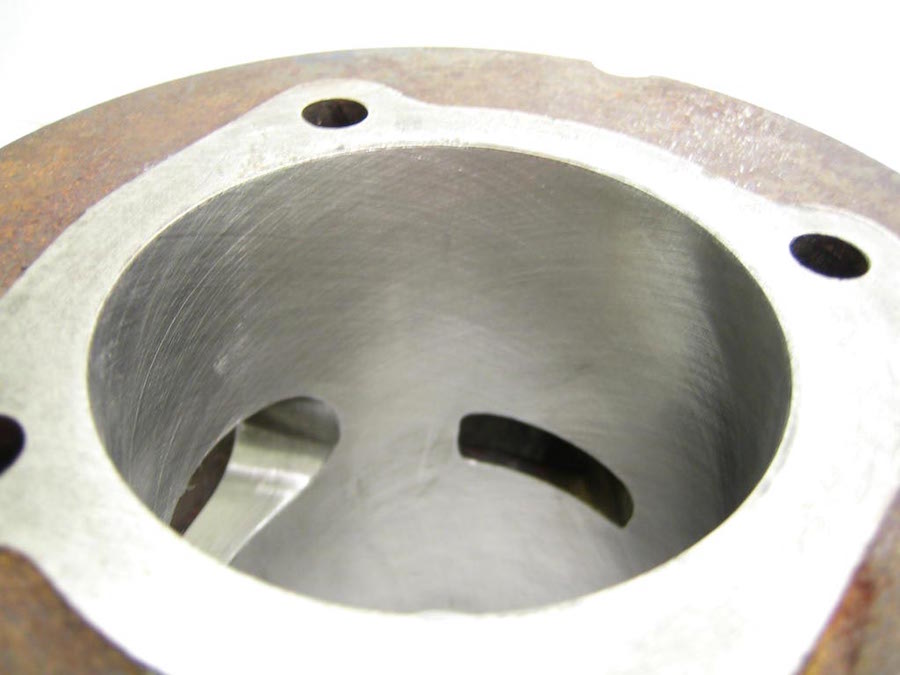 The wave of compressed exhaust gases leaves the combustion chamber at up to supersonic speeds through the straight section of header pipe. As this wave reaches atmospheric pressure it arrives at the first tapered section, the diffuser cone. This expansion in exhaust volume creates a vacuum which draws a fresh charge of fuel and air into the combustion chamber through transfer ports in the cylinder wall. Because the exhaust port is open while this is happening, a certain amount of the fresh fuel charge also flows out of the combustion chamber and into the exhaust. And this is where the expansion chamber exhaust design gets really clever, and ultimately makes two-stroke power output superior to a four-stroke of equal capacity.

As the sound wave created by the exploding fuel reaches the reverse-tapered section of the expansion chamber, the baffle cone, an acoustic wave is reflected back towards the cylinder, which then pushes the escaping fresh charge back into the combustion chamber before the exhaust port is blocked by back pressure.

The shape, size and length of an expansion chamber varies greatly depending on the particular engine and its application. Creating just the right amount of vacuum at the right time, and ensuring the acoustic wavefront arrives back in the header pipe at the correct moment, can only be done by tuning the exhaust shape for a specific engine and its desired power characteristics.

Needless to say, expansion chamber design involves some serious number crunching, not to mention a firm understanding of wave dynamics. To complicate things further, the speed of the all-important acoustic wave – literally the speed of sound – is altered by changes in temperature, so predicting its behaviour inside a red-hot exhaust system can be extremely tricky.