The Honda CB900 wasn’t so much a naked Superbike, but a bike that could adapt to nearly every situation

The CB900 is one of those true go anywhere, do anything roadbikes that Honda seem so good at building. Released in 2002, the CB was the prelude to the CB1000R that we have today, and was aimed at a slightly different sector of the nakedbike market. Sporting a re-tuned version of the firm’s 1998 CBR900RR 919 engine and a new chassis, the new machine went head to head with the king of the day – the Yamaha FZ1 – but wasn’t quite as hard-edged.

In typical Honda fashion, the CB became almost the softer option of the two, bringing a claimed 80kW to the table as opposed to the Yamaha’s 105kW. The Honda did have the edge in the weight stakes however, coming in 14 kilograms under the Yamaha at a claimed 194kg (dry).

The combination of this slightly lower power output but with less overall girth to push along meant the CB was a pretty exhilarating bike to punt along at sub-silly speeds. The 71 x 58mm inline four-cylinder engine was revised to give better mid-range performance in exchange for a slightly skimmed top-end hit and featured different inlet tracts, new camshafts with altered duration and lift, and the compression was dropped from 11.1:1 to 10.8:1 – plus there was the not-too-insignificant addition of fuel injection. This translated into about 15kW less than what the engine had in CBR-guise, but also a claimed 30 per cent more mid-range grunt.

Chassis wise the CB was a pretty simple steed. The main frame was a steel-spine with a reinforced box-section aluminium swingarm, conventional forks and a monoshock out back. The only part of the suspension equation that was adjustable was the preload on the rear shock, which was a definite hindrance in comparison to the fully-adjustable FZ1. The dual four-piston calipers with 296mm discs out front and single-piston caliper and 240mm disc rear brake set-up adorning the CB900 were the same as fitted to the 1996 CBR900RR.

Like any good nakedbike the riding position was neutral and comfy with no excessive weight pushed onto the wrists. The low seat height of 795mm was 5mm shorter than the FZ1, plus it was a little wider which made touring duties a tad easier. Pillions were accommodated with ease, and strapping down huge items on the back was made all the more easier with the grab rail and various good tie-down points located across the bike.

The lack of any type of screen or bikini fairing meant wind buffeting at above 120km/h was severe – this could be cured with a trip to the Honda aftermarket accessories catalogue – and the gearbox was noted to be a little clunky, particularly when cold.

On the road the CB is a beaut bike. The shape of that wide seat and the leverage offered by the wide bars makes low speed manoeuvring around town and traffic easy and long trips are easily accommodated in comfort with plenty of space for luggage. But it’s not a one trick pony.

Open the taps with anything like a snappy wrist and the CB will stand on its hind wheel and stay there as long as you want. Slightly shorter gearing than the CBR900RR makes this kind of behaviour annoyingly simple but it also makes carving from one corner to the next child’s play. The unadjustable suspension (not mentioning rear preload) can become a hindrance here, but it’s only when the pace really hots up that it will begin to worry you.

Build quality on the CB is excellent. It came out in Australia in red and blue, and top quality paint is used. If looked after the chrome on the underseat exhaust mufflers has shown to be excellent at repelling rust particles.

The CB900 came equipped with fuel injection so you could go the pipe/Power Commander/air filter route for a decent increase in particularly bottom and mid-range grunt – as much as 10 percent – but the versatility of the machine means engine mods are far from the only angle to take.

Braided lines and suspension upgrades don’t hurt, particularly with the rear shock, and there is a huge range of accessories that can turn the CB into pretty much anything you want. One of the most common was a small bikini fairing-esque screen to get rid of the dreaded high speed wind buffeting at high speed, and some models when bought new were fitted with an optional centre stand, clock and crash knobs.

The 2002 Honda CB900 never came in for any recalls and the 1998 engine has shown to be almost bulletproof since its release all those years ago. One Honda workshop AMCN spoke to noted that they haven’t had any real issues with cam chain tensioners at high mileage, and due to the nature of the bike, they don’t tend to get thrashed very often, meaning you can find one in good condition fairly easily.

Watch out for steering head bearings being a bit tight at high mileage and check for paint wearing through from occy straps. If you can bag one with a centre stand and small screen you’re onto a good thing.

The 2002 Honda CB900’s first service came at 1000km and was a general inspection of brakes, suspension, pivot points and chain/sprocket, plus a new oil filter and engine oil.

The second service at 6000km was a bit more in depth and saw the engine idle speed inspected, new oil and filter fitted and a general checkover and lube.

The 18,000km service was basically a repeat of the 6,000km process with the addition of new brake fluid, but at 24,000km the spark plugs were replaced and the valve clearances checked. The coolant was replaced at 36,000km but other than that it was the same procedure as a 30,000km/18,000km services. 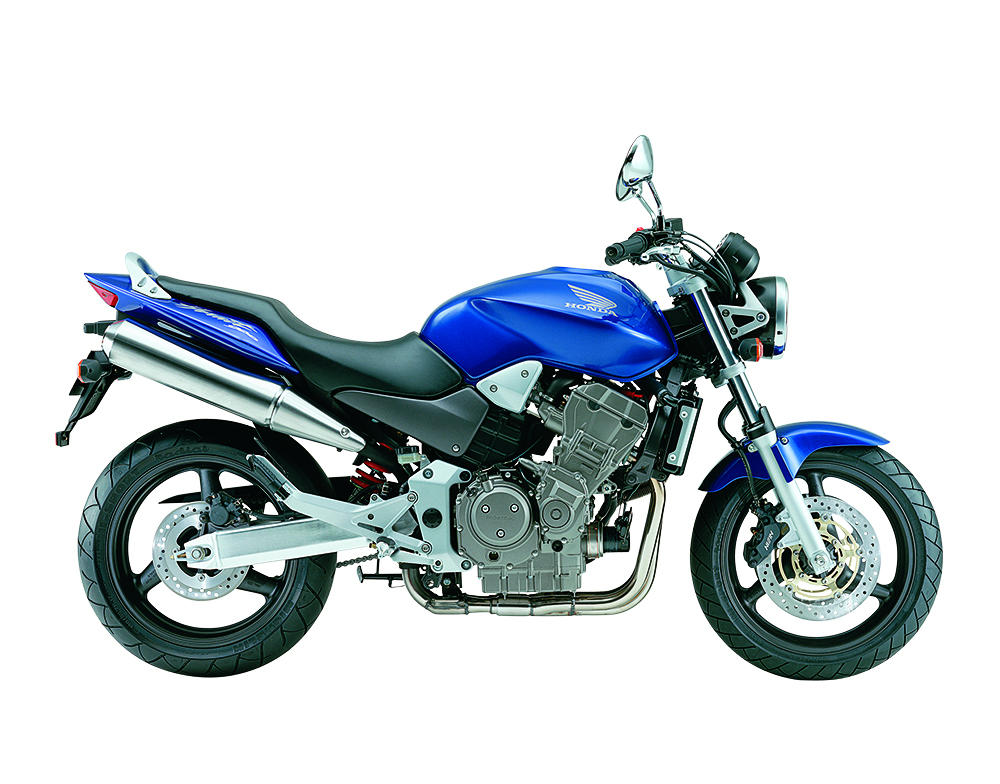