AAA Racing Cement their claim to be the fastest 100cc motorcycle in history. | Events

This year would not be without its challenges as the Salt Flats through everything mother nature could muster at competitors, extreme temperatures, head winds and two afternoon storms that soaked the salt. The team was chasing the fastest 100cc speed in the world they had set the year before with Warren Afflick riding, (Former Top Bike/Street Bike Drag Racing champion) of 113.579mph. 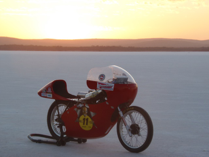 The APSBF100 early on the salt 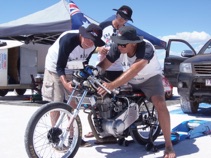 1st start up Engine No:2

The team worked hard all week, hurting their number 1 engine and forced to run the spare motor. The years efforts on the Powerhouse Dyno paid off as a strong combination late in the week saw Mitch Afflick reset the Australian ABF100 record at 108.4mph (fastest unfaired 100cc motorcycle in history in the world), and JP Afflick on his last run of the week ran a strong 116.4mph to get the record for APSBF100, the bike was running that strong that he ran a second timed mile at 116.1mph. Must be a strong little 100cc motor to run that long at full noise. The Afflick team now have a number of runs faster than any other 100cc motorcycle in the world under their belt and now hope to travel to Utah USA this August to run some big speeds on the legendary Bonneville Salt Flats. JP & Warren Afflick down the deep end after a run 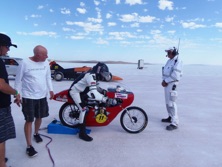 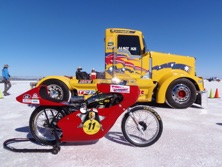 The 100cc dwarfed in tech