What’s more important in a struggling sector like sportsbikes: high-end tech and a price to match, or inexpensive usability? The 2022 YZF-R7 asks exactly that

It’s not every day Yamaha launches a new model into its range. This is the 2022 Yamaha YZF-R7, a rehashed name applied to a new addition to an existing platform, but exciting nonetheless. A user-friendly, less radical sportsbike aimed at new riders and those coming back to sportsbikes, positioned above the firm’s YZF-R3, but below the YZF-R6.

The engine is the same 689cc parallel-twin housed in the successful MT-07 – but that is where the similarities end. Uprated chassis, steeper head angle, a new fork and shock – not forgetting the good-looking R1-inspired bodywork.

Creating a new bike based on the hugely popular and successful MT-07 was a no-brainer – in fact I’m surprised it’s taken Yamaha so long. This isn’t a replacement for the inline-four R6, and forget what you knew about the original OW-02 R7, it’s similar in name only. The 2022 R7 promises to deliver a balance between road and track riding; is affordable, accessible and still carries the brand’s R-series style and look. 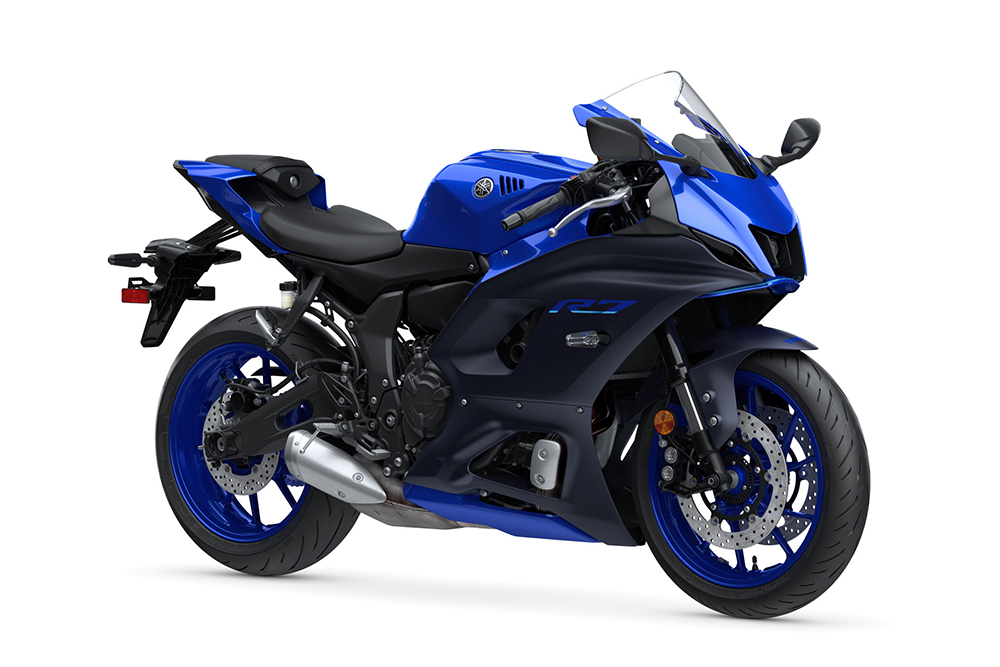 Yamaha invited us to southern Spain to test the new $14,999 (ride away) YZF-R7 on both road and track. First impressions are promising, this bike really could be the machine to re-energise the mid-capacity sportsbike segment and, given its price, could become a sales chart hit in 2022.

Familiarising yourself with the controls is, well, unnecessary compared to 2021 standards. There are no electronic rider modes to select nor rider aids to increase or decrease because there aren’t any! Simply jump on and ride because the fuelling and delivery are spot-on. 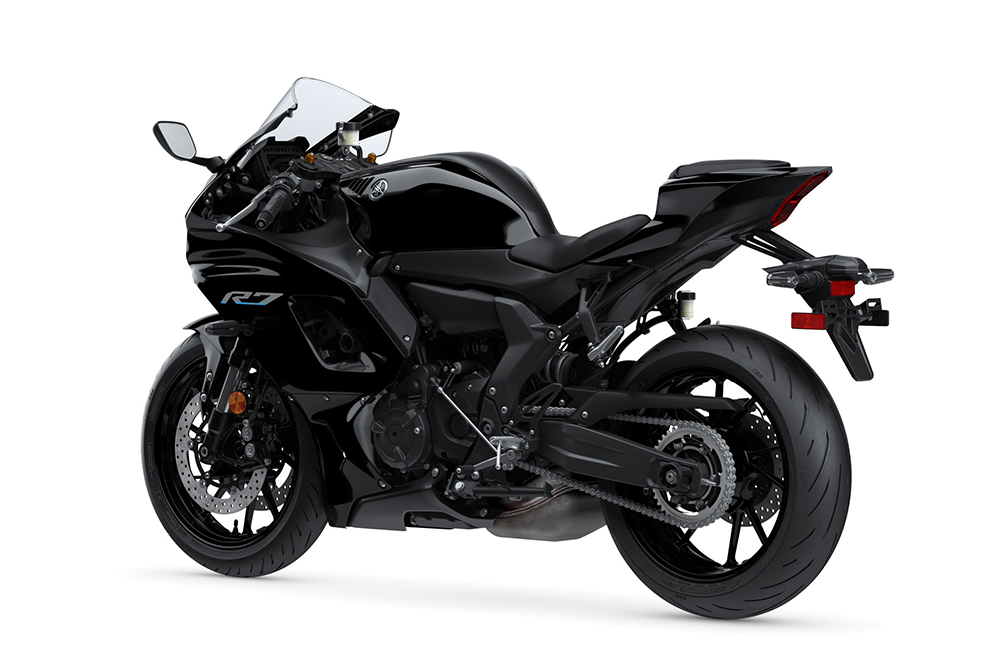 The parallel-twin engine, with its distinctive 270-degree crank, is taken directly from the MT-07. Bore and stroke, compression ratio, gearbox… everything stays the same as the engine that was updated for this year to be Euro-5 compliant. This means peak outputs of 54kW (72bhp) at 8700rpm and 67Nm at 6500rpm.

Nevertheless, Yamaha has installed a ‘first assist and slipper clutch’, which not only improves engine braking, but also decreases the clutch lever pressure by a third. The throttle-pulley routing is more direct to give a sharper, quicker feel and the gearing is lengthier, down from a 43-tooth rear sprocket to 42. With the R7’s enhanced aerodynamics, Yamaha claims the new bike has an eight percent higher top speed than the naked MT-07, but wouldn’t confirm exactly what that was. 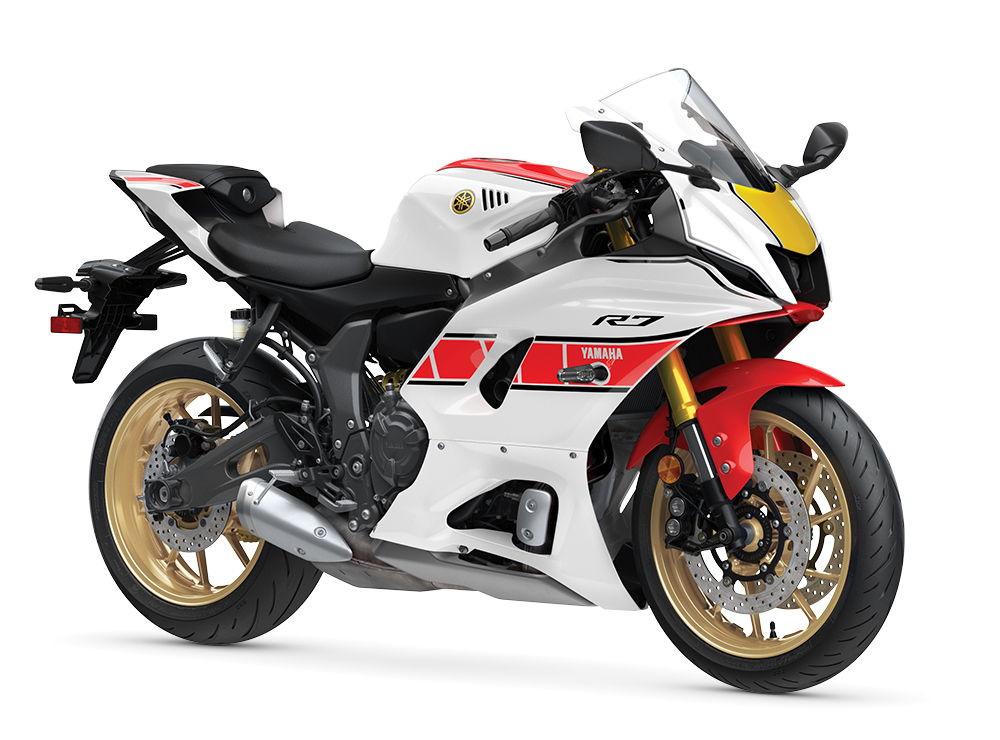 Rolling out of the hotel’s car park and the R7 is, as you’d expect, very much like the much-loved MT-07. The throttle delivery is gentle, fuelling is excellent, and the 270-crank gives the parallel twin a smooth feeling compared to similar engines with a 180-crank.

Power delivery is linear without any peaks and troughs. At 140km/h, the rev counter hovers around 6000rpm, still with plenty in the bank. Fast touring isn’t a trouble for this entry-level sportsbike, either. Chin on the fuel cap, tuck in behind the reasonably protective bodywork and 220km/h will appear on the rather plain-looking digital clocks. Stretch the cable and in favourable conditions an indicated 225km/h could be achievable – on the clock. 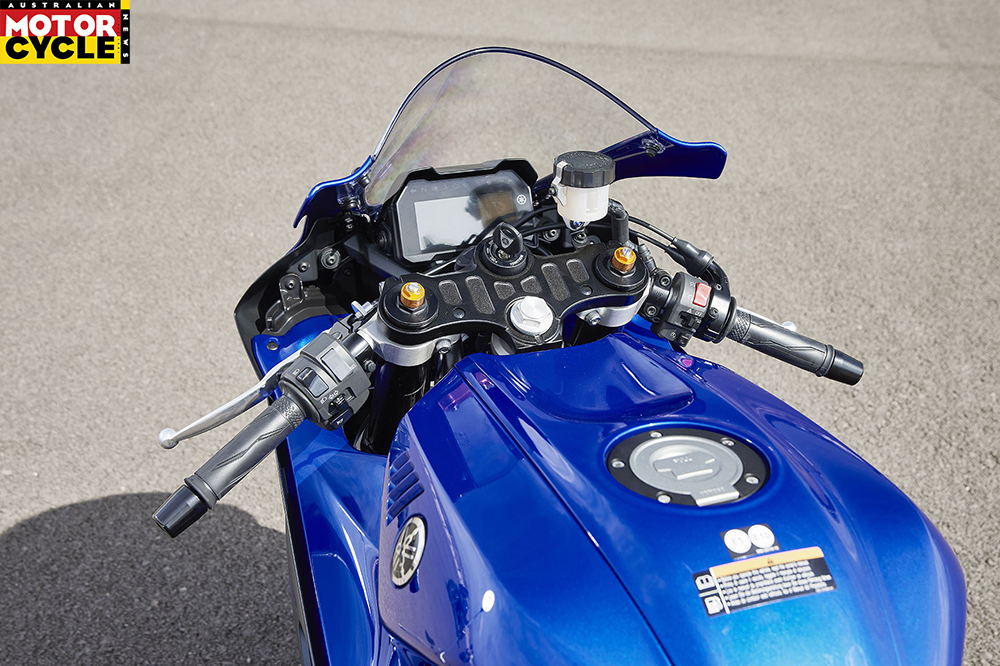 Yamaha fitted the optional Quick Shift System (QSS, for an extra $160), which works on upshifts only for the track part of the test. You need to keep the little engine busy, and the QSS becomes indispensable as you live in the upper 25 percent of the rev range. Away from the track, the MT-07-derived engine will happily pull cleanly from low down in the rpm, but on track it adores being thrashed, with upshifts only made when the shift lights illuminate.

Around the technical Andalucia racetrack in southern Spain, I assumed the YZF-R7 would feel like an underpowered R6 and leave the rider a little disheartened, like drinking alcohol-free beer. However, my predictions were incorrect. 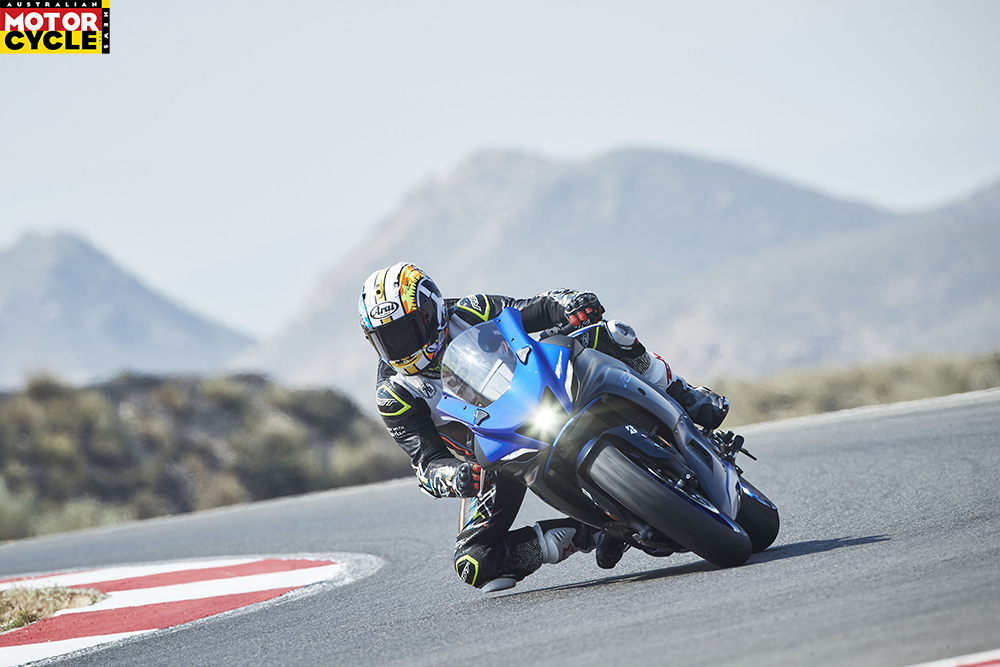 Because the R7 has an appeal of its own: it’s punchy out of the slow corners, and despite the lack of rider aids you can get on the power very early. Inherent mechanical grip (R11 Bridgestones were fitted for the track test) combined with unintimidating power output translates to a quick exit.

Admittedly, on the long straight it’s not breathtaking: fourth and fifth gears feel long, and sixth is almost too tall for the track. But I can see the benefit for inexperienced riders. The lack of power gives you time to breathe and relax; you have time to focus on the line and have fun. Riding an R-series inline-four cylinder on the edge can be hard both mentally and physically, but the R7 isn’t. 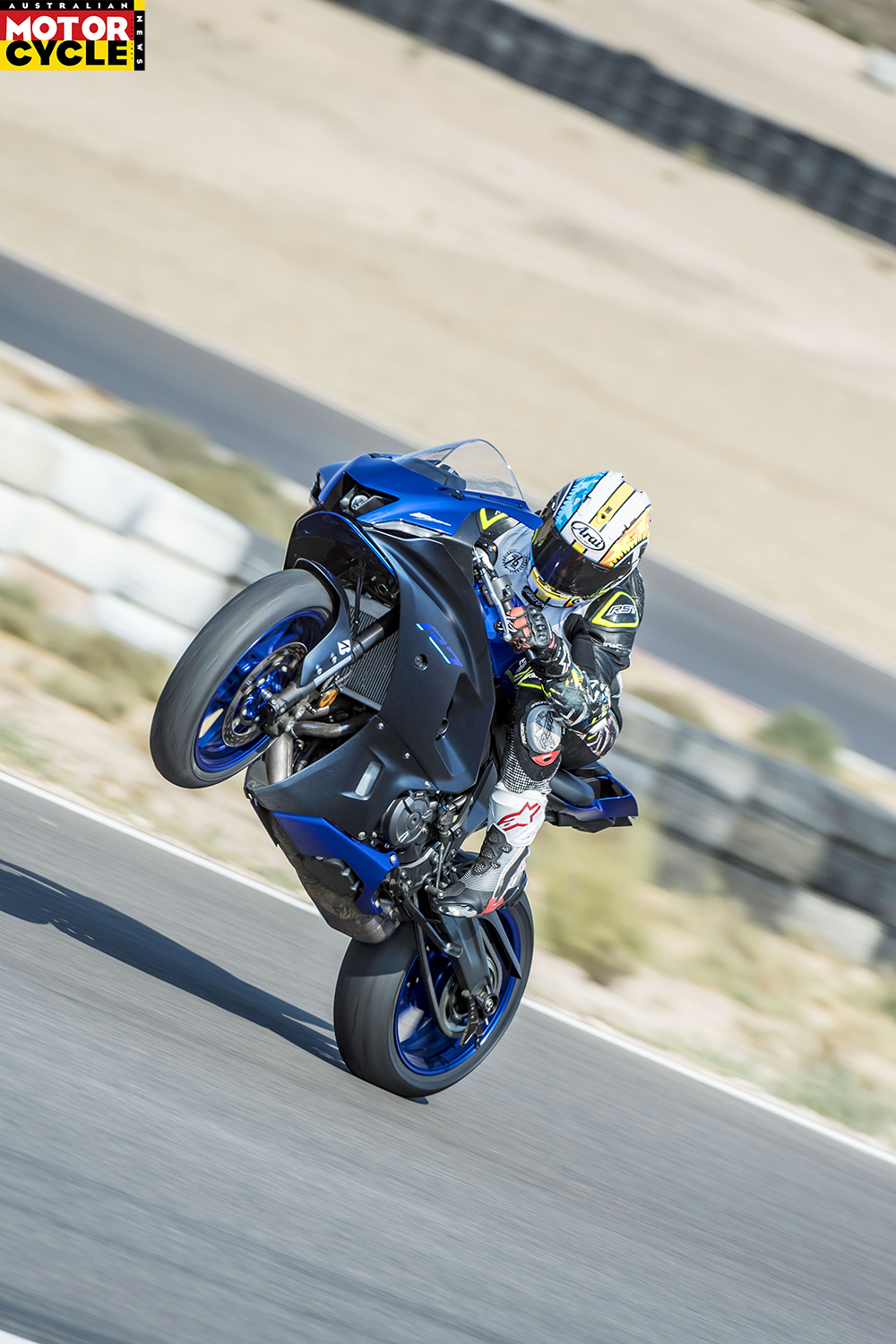 On the road, I had few complaints about the new radial-mounted stoppers. On the track, the brakes are powerful enough to control this lightweight bike – as long as you’re not pushing for the lap record. There’s a nice feel at the adjustable lever, and new or inexperienced riders will feel reassured.

At the end of the fifth-gear back straight, the ABS was a little intrusive and trying to feel the last percentage of braking power was vague. You can’t feel the pads gripping. If you opted to race an R7, you’d need to remove the ABS and upgrade the pads for a better feel. Race brakes are available in the GYTR racing package. 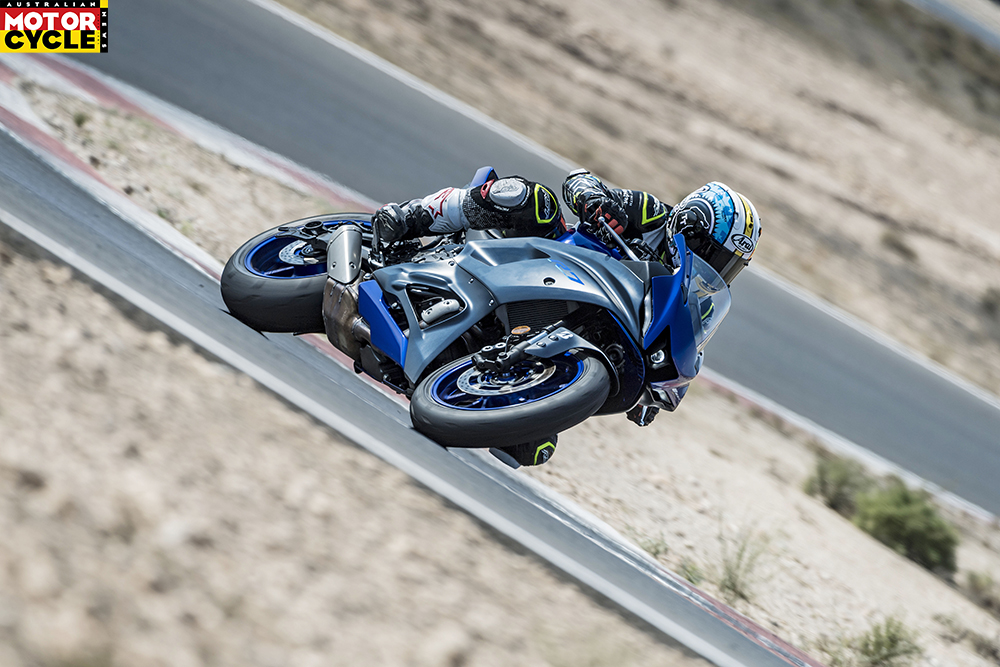 In the bends, many will compare the new R7 to the MT-07, but this is an entirely new bike and not an MT-07 with some attractive bodywork included. The chassis has more rigidity, the steering head angle is steeper, the rear has been lifted via a new linkage and a revised rear shock, the wheelbase is shorter (by 5mm) and the KYB fork is completely new, now inverted and fully adjustable. The centre of mass has moved forward while the rider, a large percentage of the overall mass of course, is positioned much more R6 than MT-07.

Despite its racy and aggressive looks, the R7 is forgiving. The ride is on the soft side of sporty, this isn’t like a harsh supersport machine. The R7’s focus is on real-world bumps and road decay. The suspension has plenty of travel and movement, which converts confidence to the rider, especially inexperienced hands. 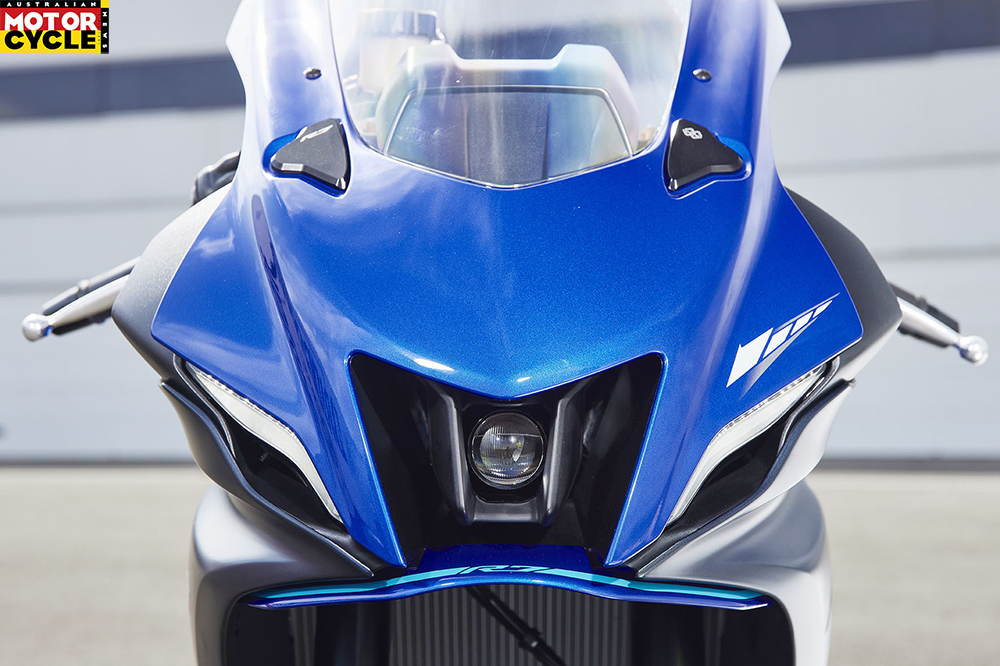 You can feel what is happening beneath you, and feel at home on the R7 from the off. Riding hard is engaging and really great fun. Riding in the mountains devoid of traffic and police, I didn’t want to stop for lunch. Knee-down left to knee-down right with minimum effort. I can’t remember the last time I rode any bike on the road and had so much fun while remaining composed, and not scaring myself or others.

As you only have 54kW to play with and the chassis is compliant, you’re in control, not the opposite. You have time to work out the corner, see it open up, and get on the power early. Or instead, you can leave the R7 on its side, knee skimming to the road, just for the hell of it. Grip and feedback are truly excellent. 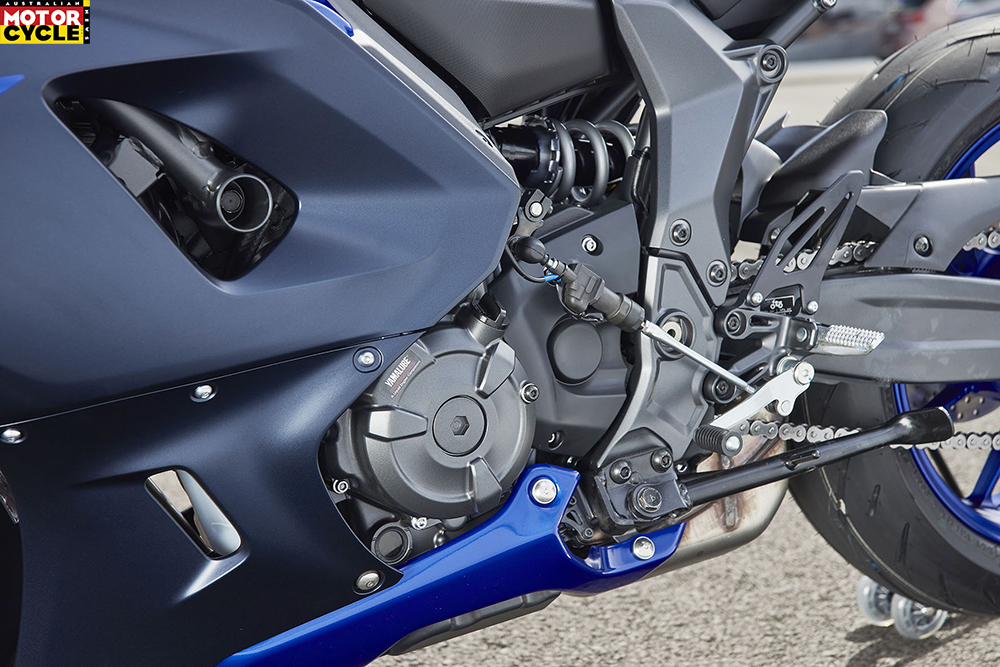 When you push on the road to trackday speeds, the standard suspension settings need tweaking for more support. Brake heavily and the fork dives too rapidly and with too much travel, and the rear is on the soft side. But this bike is aimed at new riders, or those lacking experience, not former racers pushing the boundaries of grip and treating the roads like the TT.

For the track test, Yamaha cleverly fitted trackday rubber, and tweaked the suspension to match. Again, like the motor, I wasn’t disappointed; the little R7 was a real surprise. 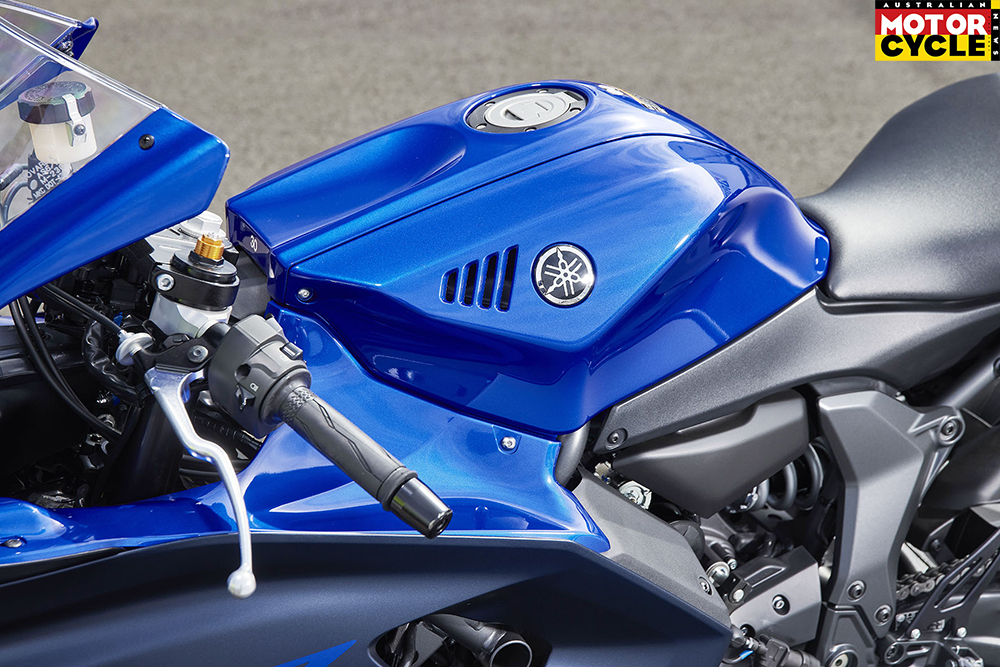 Considering you get a dollar’s change from $15K, the chassis and suspension perform above expectations on track. The track is hard to learn and demanding, but the R7 made easy work of it. With the tweaked suspension, I could now brake later and with more fork control. The turn-in and roll into the corner were lovely, not razor-sharp, but easy enough. Once on its side, the R7 consumes corner speed and will carry impressive levels of lean, to elbow-down levels should you want to show off. Toe sliders touch, but I had no problem with ground clearance, unlike other bikes in this class. On exits, the rear shock takes the strain of the relatively low power, the sticky rear Bridgestone grips, meaning you can get on the power early – again and again. The absence of electronics is completely forgotten as you chase the perfect lap. 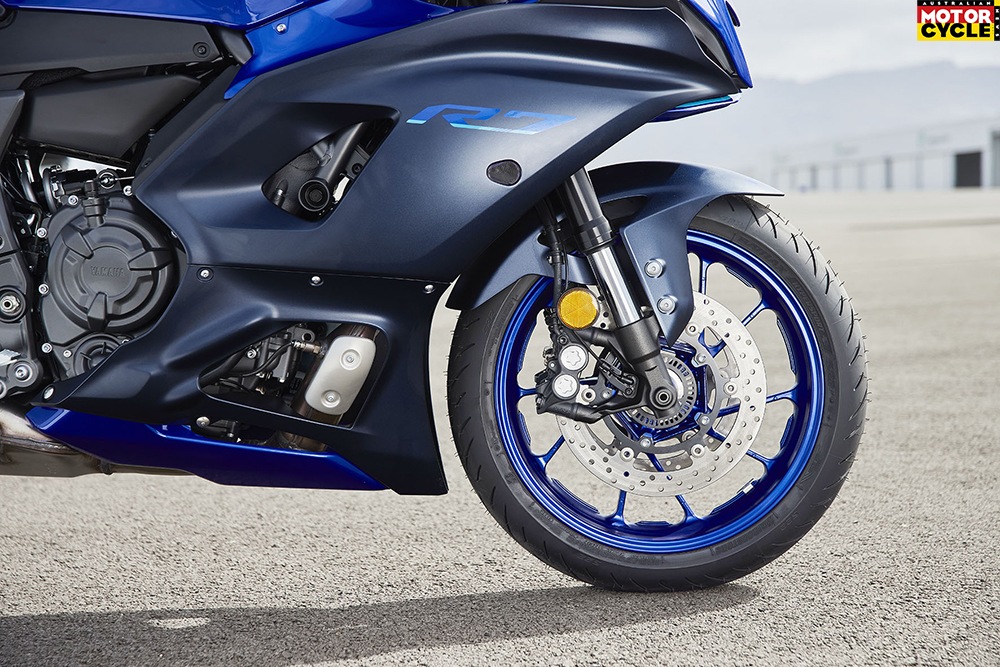 The lack of rider aids will split opinions. I did not feel short-changed just because the R7 lacked any traction control or cornering ABS. The fuelling is practical, the suspension feedback is excellent for this type of bike, and we rode in perfect conditions.

However, I grew up when we only had black and white TV, and I was riding angry two-strokes without any rider aids at 17, and this bike is aimed at new or inexperienced riders who will probably ride all year round. In cold or damp conditions, will the lack of rider aids concern some buyers, especially when other models have far more advanced rider aids? 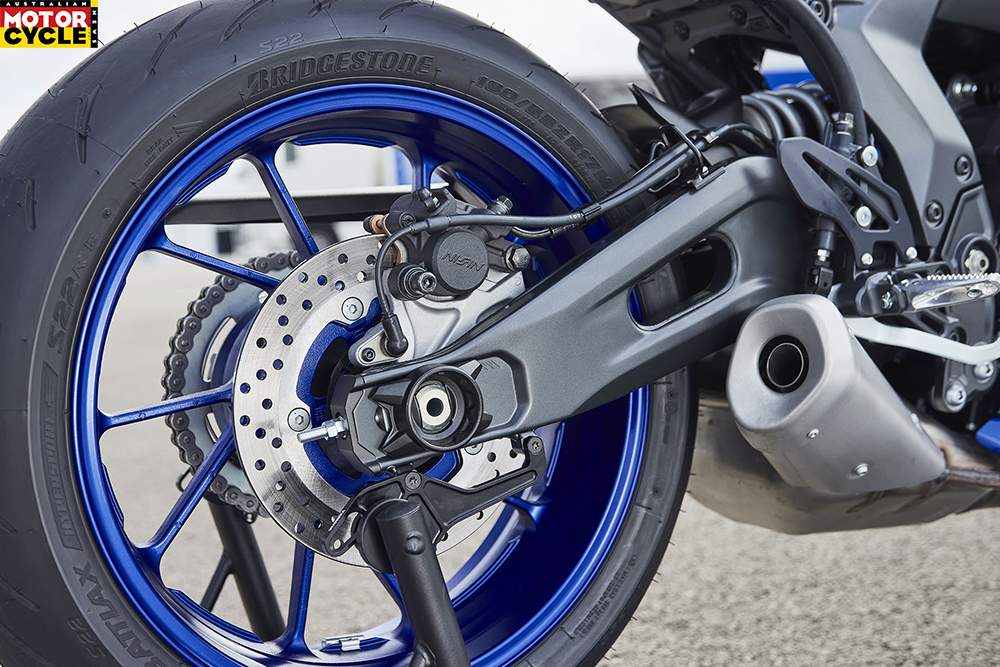 The main competition to the YZF-R7, Aprilia’s RS660, has lean-angle sensitive rider aids and a swag of riding modes, but it will cost you $5531 more. But even KTM’s new RC390 has basic lean-angle sensitive rider aids. Sure, it isn’t a direct competitor but it is certainly sporty, and it’s expected to be considerably cheaper than the R7. Mind you, both the Aprilia and the Yamaha are available in learner-approved guises which carry ride-away prices of $20,030 and $13,999, respectively.

Yamaha already had the excellent MT-07 and its line-up was missing a middleweight sporty roadbike. It was an obvious and clever decision for Yamaha to produce this bike. But I bet it wasn’t easy producing an affordable, attractive machine capable of cutting it on the track and being easy to live with and manageable, at a competitive price – but that’s exactly what it’s achieved. Young and old will appreciate the styling, especially for the price. On the road, it’s fun and easy – and can cut it. 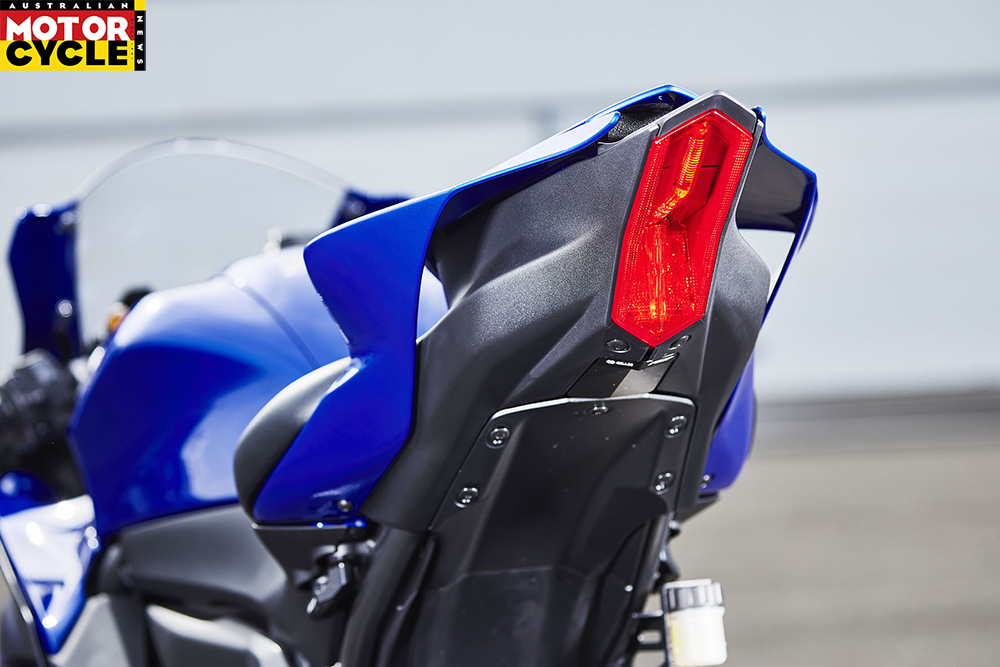 Tweak the new suspension and the admiration continues on the track. As long as you’re not up against superbikes on a quick circuit like the Island, then you’ll wear an idiotic smile all day long. I did. On the track, and on-road ridden at pace, I felt like a teenager, enjoying sporty riding without doubling the speed limit or scaring myself. There’s enough power to raise your heart rate (and the front wheel), but not enough to send your brain into panic mode.

This is a terrific bike, one that re-ignites this market segment and makes it even more exciting. The YZF-R7 should attract a wave of new young riders to the joys of sportsbikes. 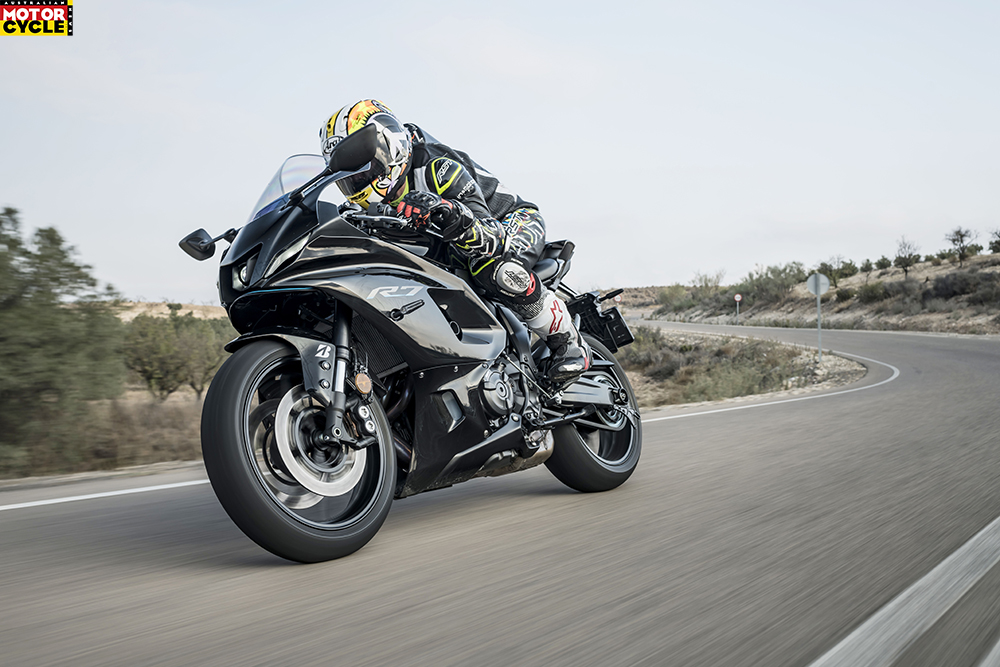