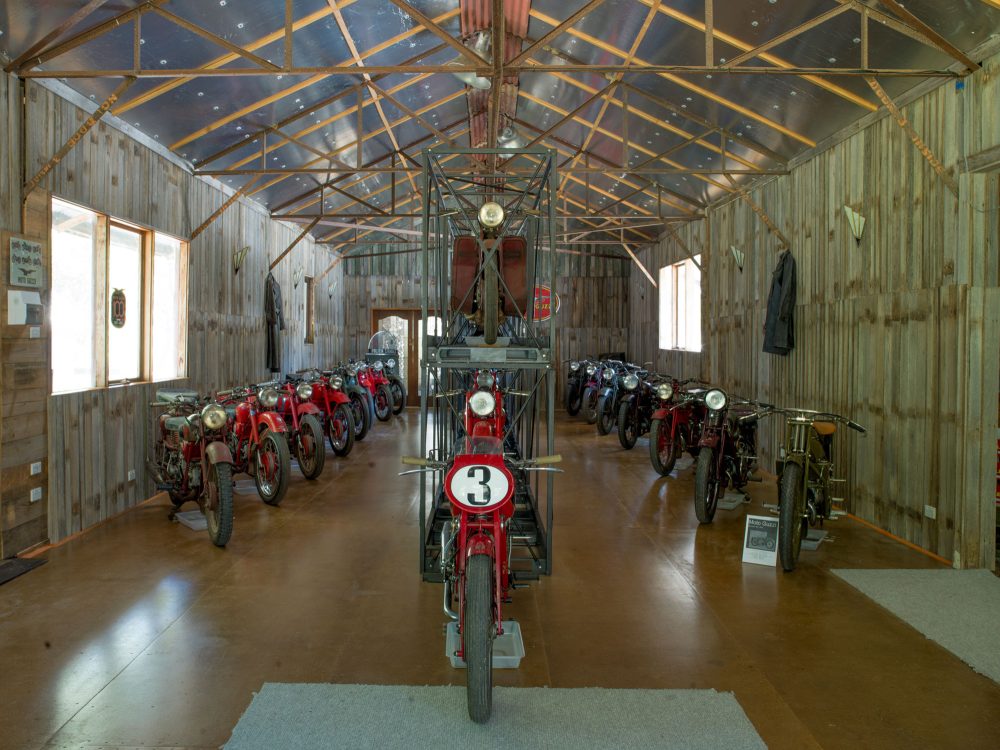 Held on March 11-13 and brought to you by Teo Lamers Motorcycles and Moto Guzzi Australia, the inaugural Festival of Moto Guzzi will be nestled on a large acreage between the rolling hills of Yea, just 1.5 hours north of Melbourne, and takes inspiration from old-school motorcycle rallies. 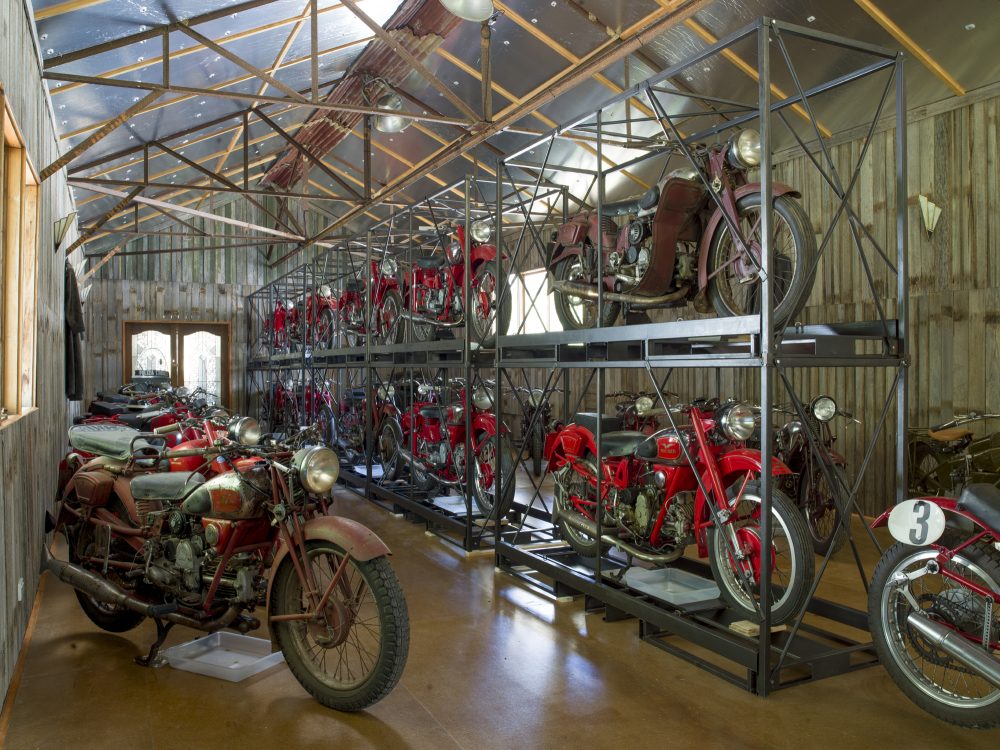 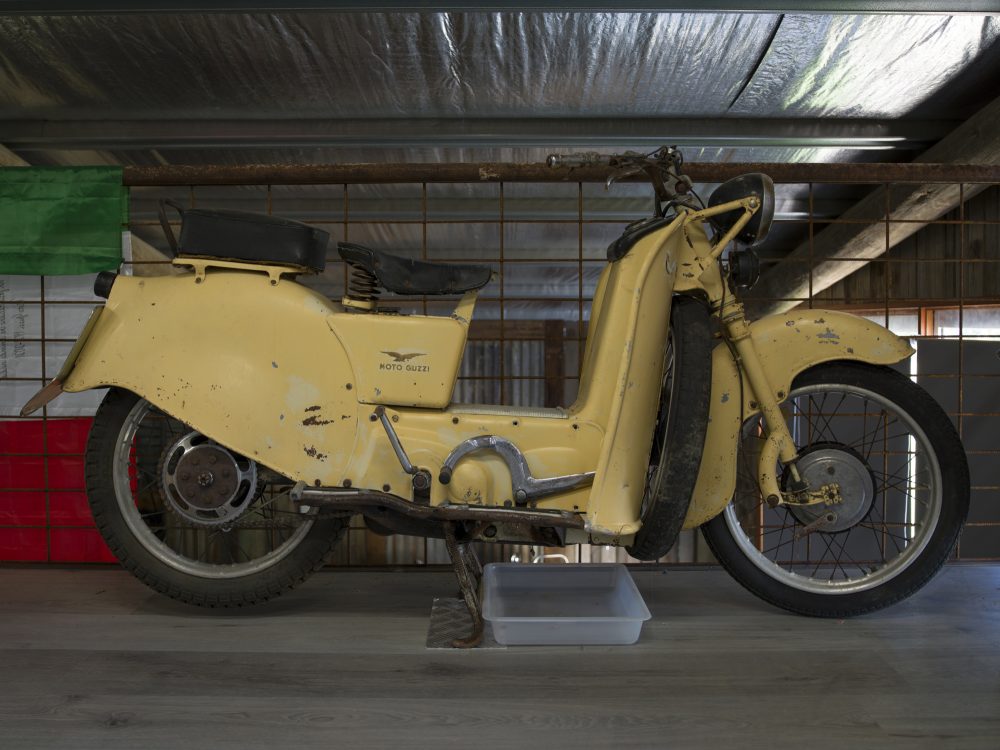 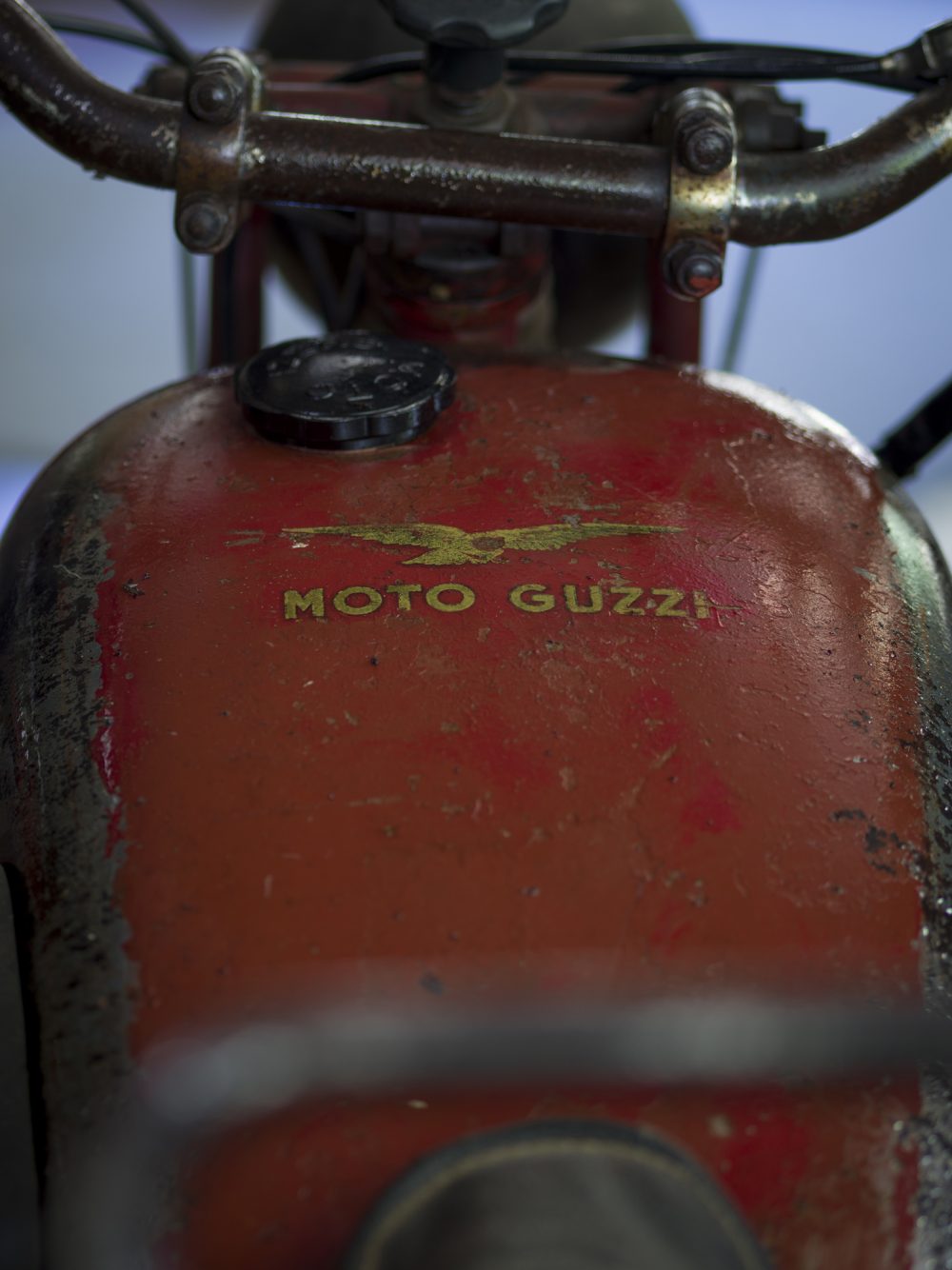 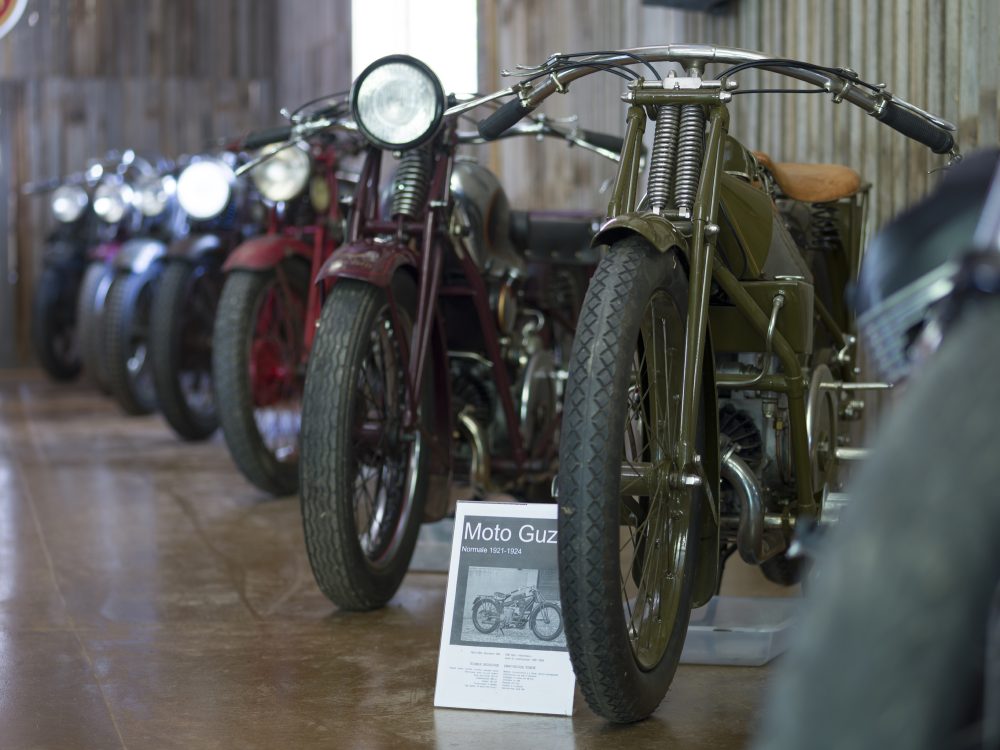 ABOUT THE CATHEDRAL OF MOTO GUZZI
Hand-built over a five-year period by a small group of passionate Moto Guzzi enthusiasts, the Cathedral of Moto Guzzi showcases the private collection of more than 170 Moto Guzzi motorcycles owned by Moto Guzzi doyen, Teo Lamers.
Displayed over the Cathedral’s three levels, the bikes are grouped by model semblance to highlight the mechanical evolution, with development underway to open a library and a bar/café. The Cathedral is open to the public for guided tours by appointment. 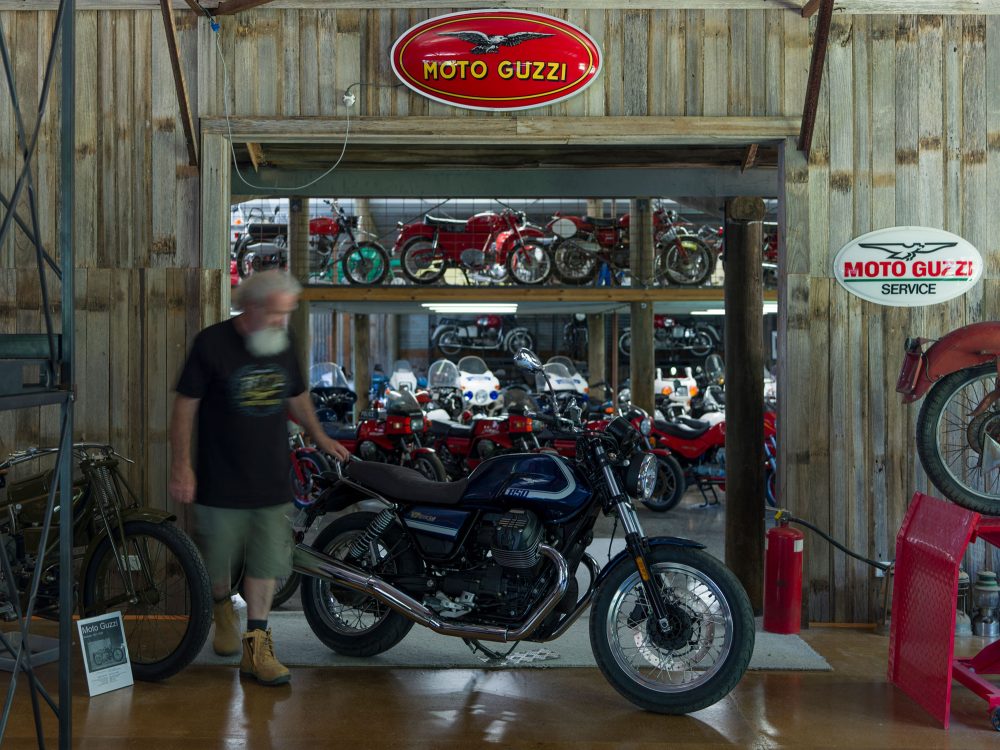 ABOUT TEO LAMERS
If Moto Guzzi was a religion, Teo Lamers would be a saint. You’re unlikely to meet anybody as devoted to a single motorcycle brand for as long as this straight-shooting Dutchman with a white walrus moustache. Because for Teo, what started out as a hobby, tinkering with bikes in a shed back in Holland, became a lifelong passion. And it was that single-minded, single-branded passion that fuelled the fire to establish the largest Moto Guzzi dealership in the world – Teo Lamers Motorcycles.

Teo Lamers:
Maybe I’m a motorcycle-racist. There are many better bikes however you want to look at it, but, to me, a Moto Guzzi is more than just a bike. I know the people who make them. I know the village where they live. I know the restaurants. I’ve been going there for so long. I know how important the factory has been for Italy, for Mandello, to survive after the war. It’s the Italian culture, the language, the food, it’s the whole package. Italians are warm-blooded. They have this passion.
I bought my first Moto Guzzi – a second-hand V700 from 1967 – at the age of about 19. I still remember when I started it up and feeling the engine go ‘boom, boom, boom, boom’. I rode it home and just fell in love with Moto Guzzi the brand from there.
Riding a Moto Guzzi is a completely different feeling. The DNA of 100 years is in today’s range. The bikes are still exclusive. If you ride one, it draws people’s attention. You don’t get that with other brands. 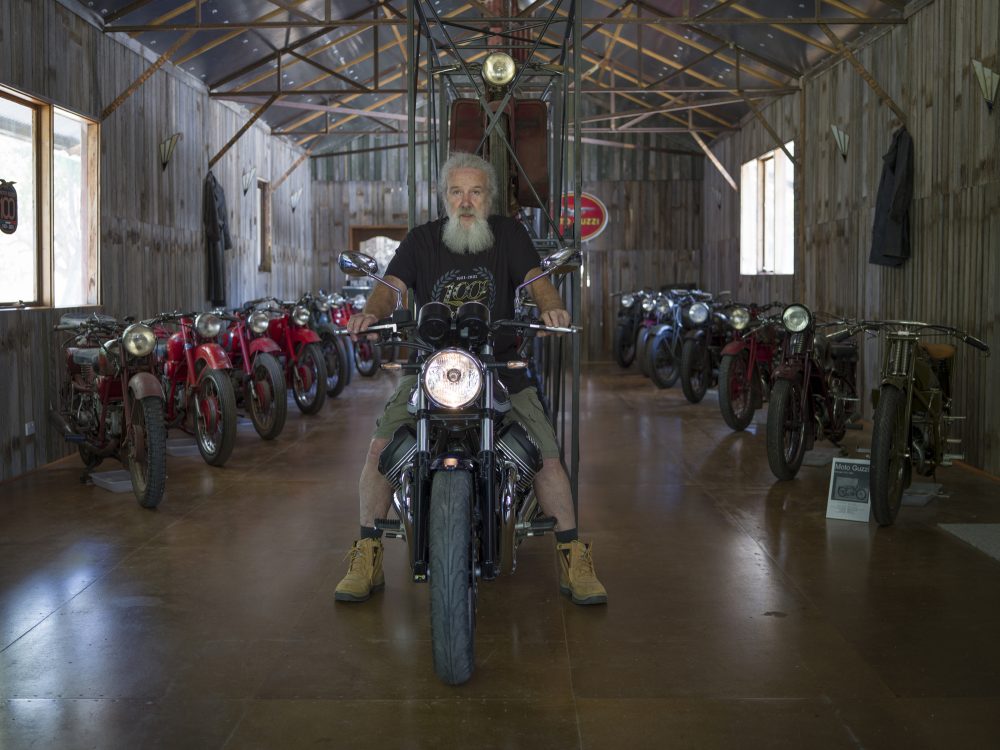 HISTORY OF MOTO GUZZI
Moto Guzzi was born when two young pilots in the Italian Air Force during the First World War, Giorgio Parodi and Giovanni Ravelli, had the good fortune to form a warm relationship with the engineer Carlo Guzzi. They not only shared the fate of the war, but also a passion for engines. The three found themselves in tune with each other, so Guzzi shared his idea: to create a motorcycle that was quite different from those currently produced. He wanted to revolutionise many characteristics of motorcycles, particularly the chassis. The two pilots had no reservations. They respected the engineer enormously for his skills and shared his belief in the idea. With a return to peace, they saw the opportunity to make the plan a reality.
Giovanni Ravelli was a famous motorcycle racer with considerable success, and already relished a new ‘steel horse’ to ride in competition. Unfortunately, however, destiny would see that Ravelli would not realise his dream when a flying accident saw the young life given back to its country.
Although the most enthusiastic proponent of the plan had passed away, Giorgio Parodi and Carlo Guzzi still believed in the idea. Undeterred and with initiative and will, together with financing (1500 lire) from Giorgio’s father – the ship owner Vittoria Emanuele Parodi – their union saw the birth of their first motorcycle: the ‘G.P.’, or Guzzi-Parodi.
However, Giorgio Parodi, in recognition of the motorcycle’s creator, wanted the name changed to ‘Moto Guzzi’. He also chose the winged eagle as a symbol of the brand, the same eagle that for many years adorned the pilots’ uniform. This was to honour their fallen companion. Thus, it was on March 15, 1921, that the Societa Anonima Moto Guzzi was official founded. 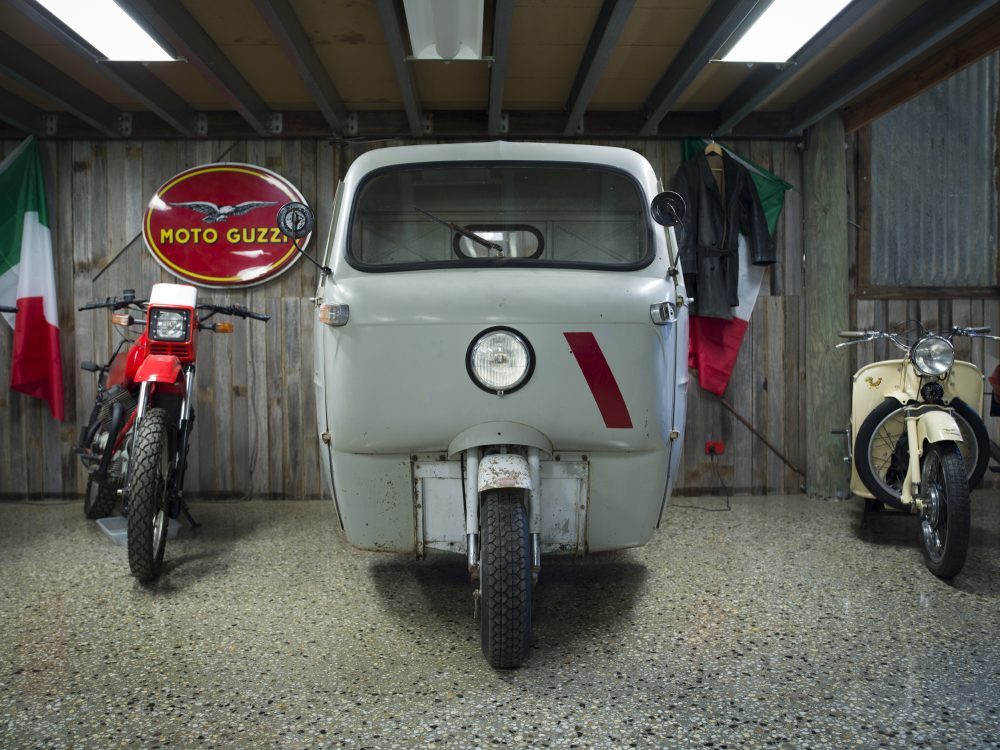 PIAGGIO GROUP – A NEW CHAPTER
On 30 December 2004, Moto Guzzi became a part of the Piaggio Group, the European leader in the two-wheeler market and one of the world’s major manufacturers in the sector with a stable of reverend brands including Aprilia, Vespa, Piaggio Scooters, Gilera and Derbi. And it was under the sign of this relaunch that, in March 2005, the Moto Guzzi Breva 1100 naked sportbike was introduced. September that same year saw the widely acclaimed launch of the Griso 1100, a bike boasting original engineering solutions and unique styling.
Testifying to the great passion that unites all Moto Guzzi owners, tens of thousands of Moto Guzzi enthusiasts, or Guzzisti, from across the globe flock to Moto Guzzi’s birthplace, Mandello del Lario, in northern Italy, for the annual Giornate Mondiali Guzzi, or World Guzzi Days between September 15 and 17.
Moto Guzzi is committed to accelerating its trajectory, racing towards a future that it will continue to help shape rather than resting on its laurels. Despite reaching the grand milestone of 100 years in 2021, the Eagle will continue to soar.

Since its introduction back in 1967, the Bell Star has long represented the standard in head protection.

Thirty years ago, MotoGP racer Randy Mamola test-piloted the first onboard live camera. Now his son, Dakota Mamola, is carrying on the tradition of pioneering onboard technology and supporting the first-ever GoPro Live VR system while competing on the MotoAmerica circuit. Take a