Razgatlioglu and Rea duke it out for the 2021 WorldSBK championship lead in Magny-Cours, France

Race 1
After practice, it seemed obvious that Toprak Razgatlioglu (Pata Yamaha WorldSBK Team) and Jonathan Rea (Kawasaki Racing Team) would fight it out for the honours in Race One of round 8 at Magny-Cours. The man-to-man duel between the championship leaders went – eventually but emphatically – in favour of the Turkish rider, who was almost 4.5 seconds ahead at the end. All while doing a rolling stoppie over the finish line.
Rea led early on to try and build a margin of safety but Razgatlioglu was past him before five laps had been completed and Rea was playing an impossible game of catch-up from then on. 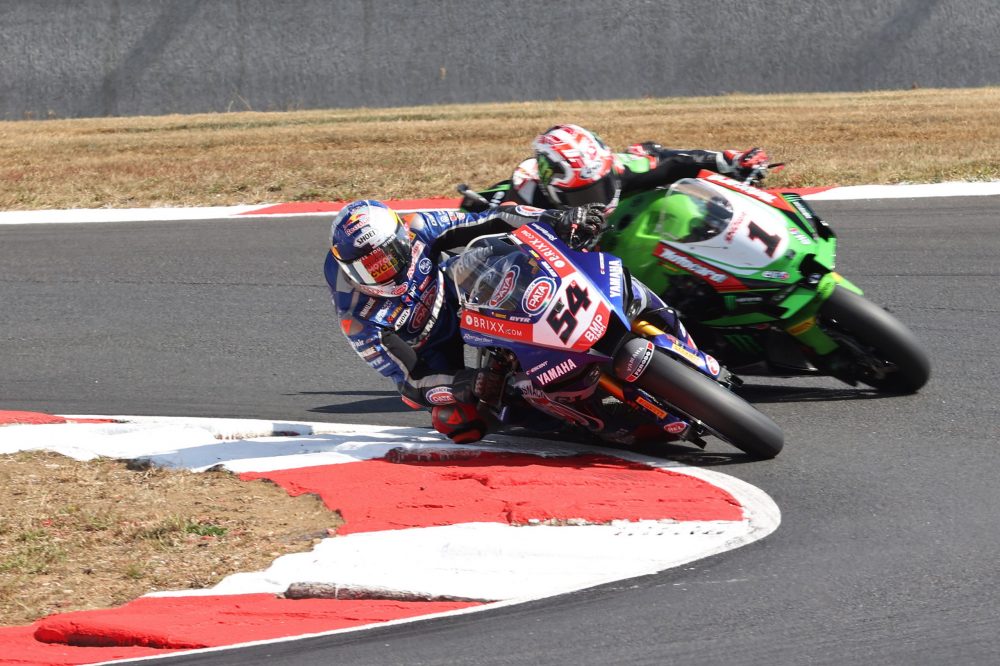 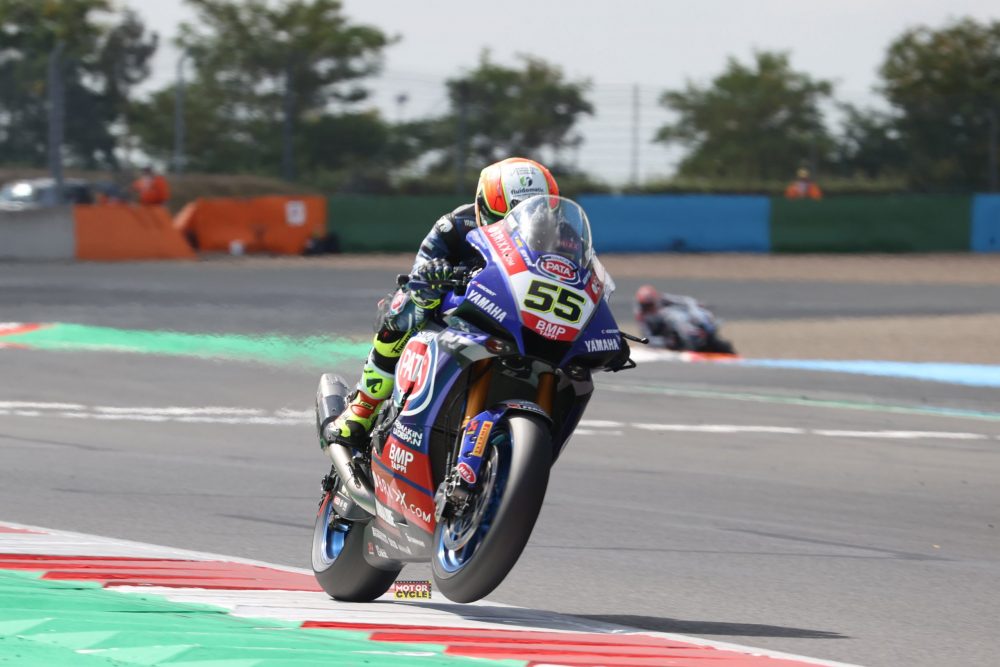 The battle behind the top five riders saw six bikes in close company at the midpoint of the race, with Chaz Davies (Team GoEleven Ducati) eventually seventh, Axel Bassani (MotoCorsa Racing Ducati) eighth, Tom Sykes (BMW Motorrad WorldSBK Team) ninth and Haslam tenth, just holding off Garrett Gerloff (GRT Yamaha).
Scott Redding (Aruba.it Racing – Ducati) fell trying to make a pass inside at Turn 13, with three laps to go, and he got back on to finish 12th.
After his race 1 win, Razgatlioglu moved ahead Rea by five points in the championship, after they started the day level-pegging at the top of the WSBK table. 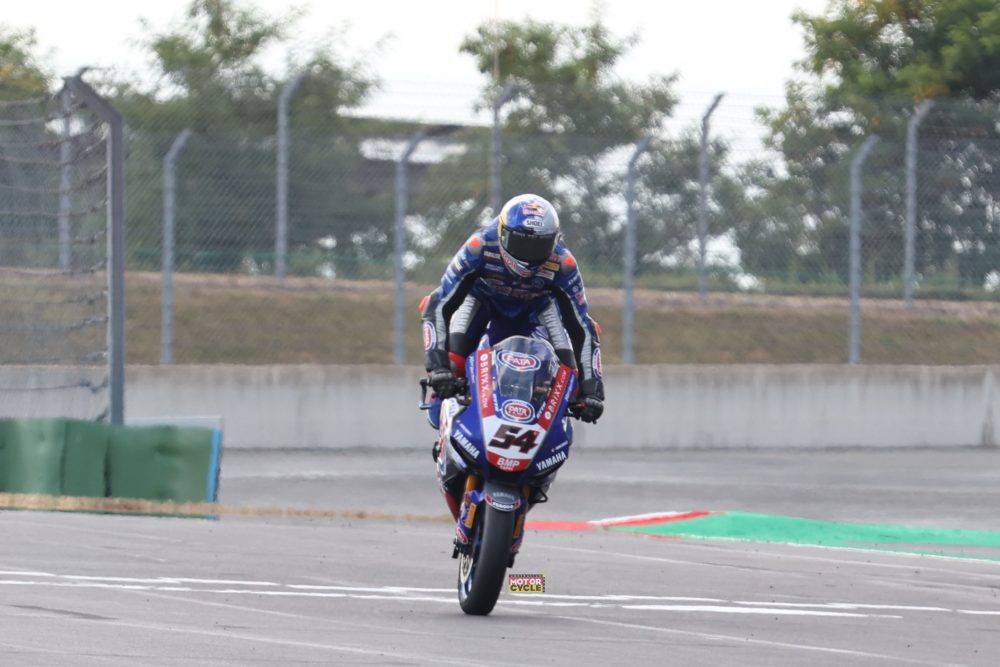 Superpole Race Magny Cours
Toprak Razgatlioglu (Pata Yamaha WorldSBK Team) won his second dry race of the Magny Cours WorldSBK weekend in the ten lap Tissot-Superpole sprint, by 0.352 seconds from the combative and ever-present threat of Jonathan Rea (Kawasaki Racing Team).
Razgatlioglu could not gap Rea enough to get away today and in the final lap the Kawasaki rider passed the Yamaha man.
In the run down to the final Lycee section – a 90° right followed by the sometimes tricky right left chicane flick – Razgatlioglu got his braking right and left Rea no more chances to attack into the final chicane. 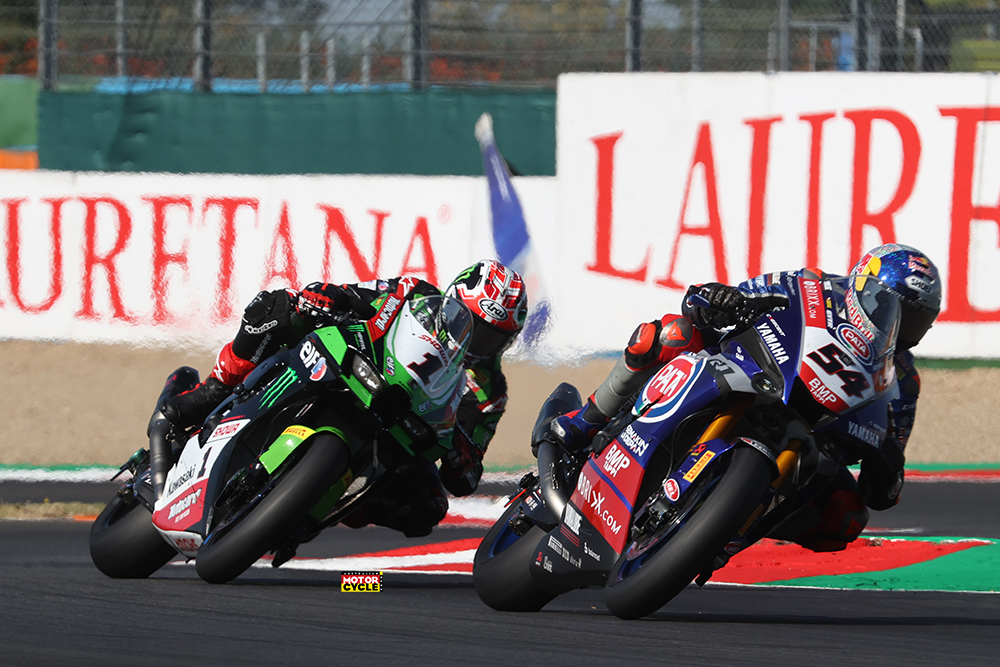 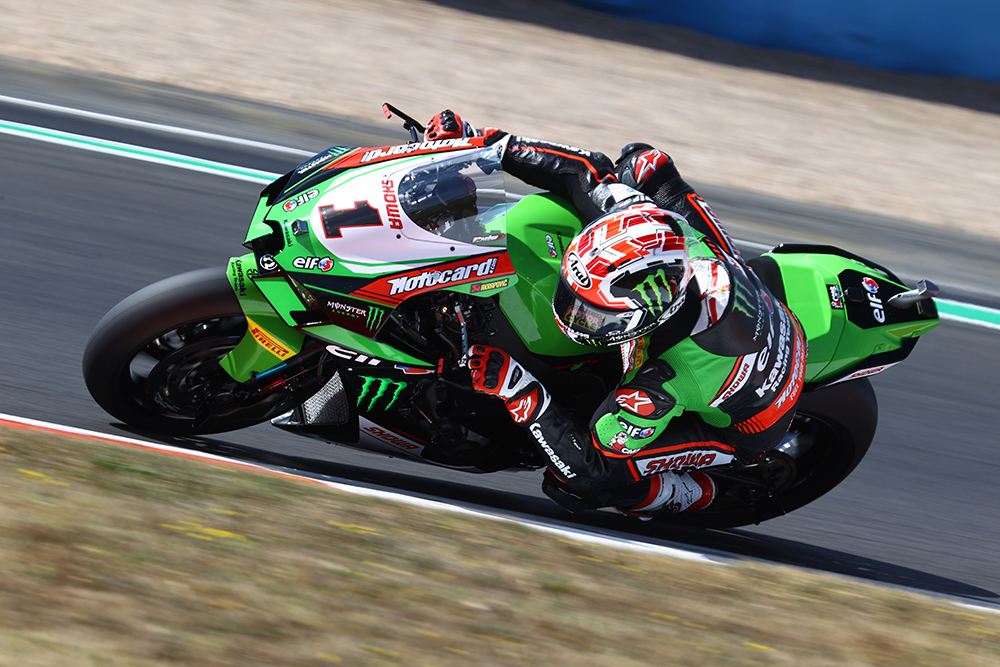 WORLDSBK RACE TWO Magny Cours
Another brilliant man-to-man fight between Toprak Razgatlioglu and Jonathan Rea (Kawasaki Racing Team) was a live and kicking contest until the final few laps, when one more lunge from Rea into the hairpin dropped him back too far to claw his way back into Razgatlioglu’s slipstream one last time.
Eventually, Toprak’s pace was just too much, even on worn tyres. 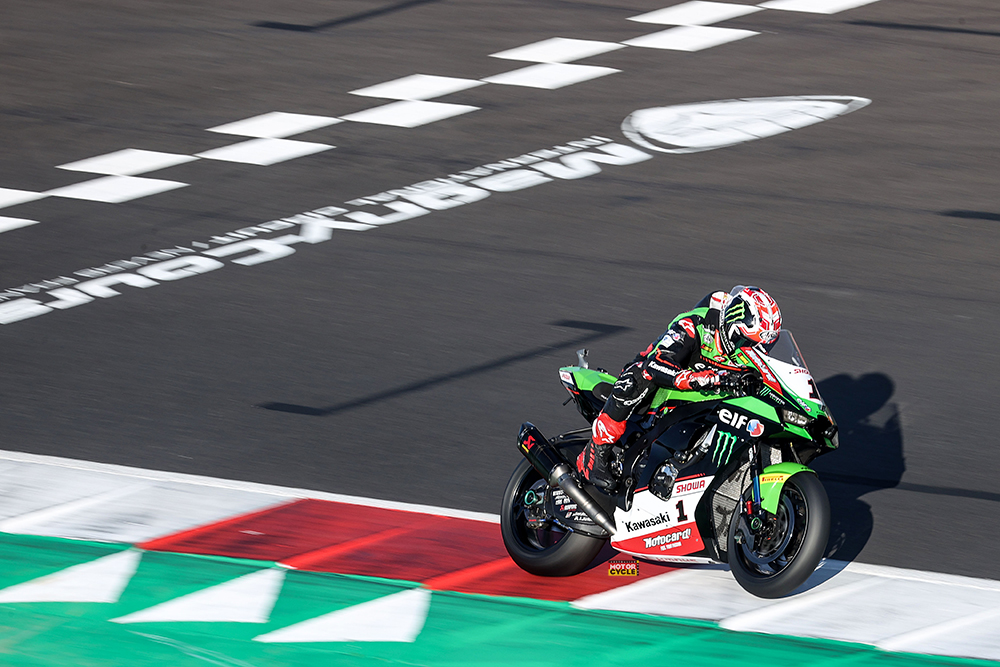 A majestic triple of race wins in France was Razgatlioglu’s first in WorldSBK as he extended his championship lead to 13 points over Rea.
Third in Race Two, after a tough Saturday, was Scott Redding (Aruba.it Racing – Ducati) after Alex Lowes (Kawasaki Racing Team) fell from a podium place early in the 21-lap contest, on lap two.
Andrea Locatelli (Pata Yamaha WorldSBK Team), Chaz Davies (Team GoEleven Ducati) and Alvaro Bautista (HRC Honda) finished in the same group at the flag, with Locatelli ten seconds from the win. 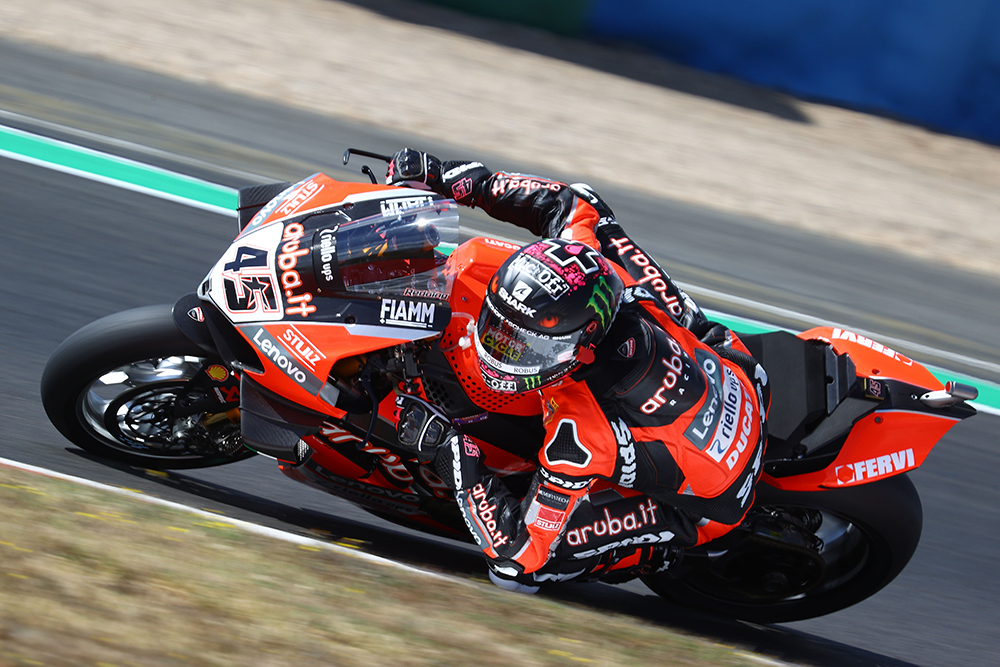 Michael Ruben Rinaldi (Aruba.it Racing – Ducati) was a lonely seventh, with Michael van der Mark (BMW Motorrad WorldSBK Team) getting the better of a close duel with Garrett Gerloff (GRT Yamaha) for eighth place.
Tom Sykes (BMW Motorrad WorldSBK Team) was tenth, 20 seconds from the race winner Razgatlioglu.
After crossing the line in first Razgatlioglu sat on 373 in the championship to Rea’s 360, with Redding on 298 and Locatelli 186. Lowes is fifth with 176.
After a post-race penalty for a track limit violation, Toprak was demoted to second with Rea being awarded the Race 2 win, reducing Toprak’s championship advantage from 13 points to 7 points ahead of Rea. 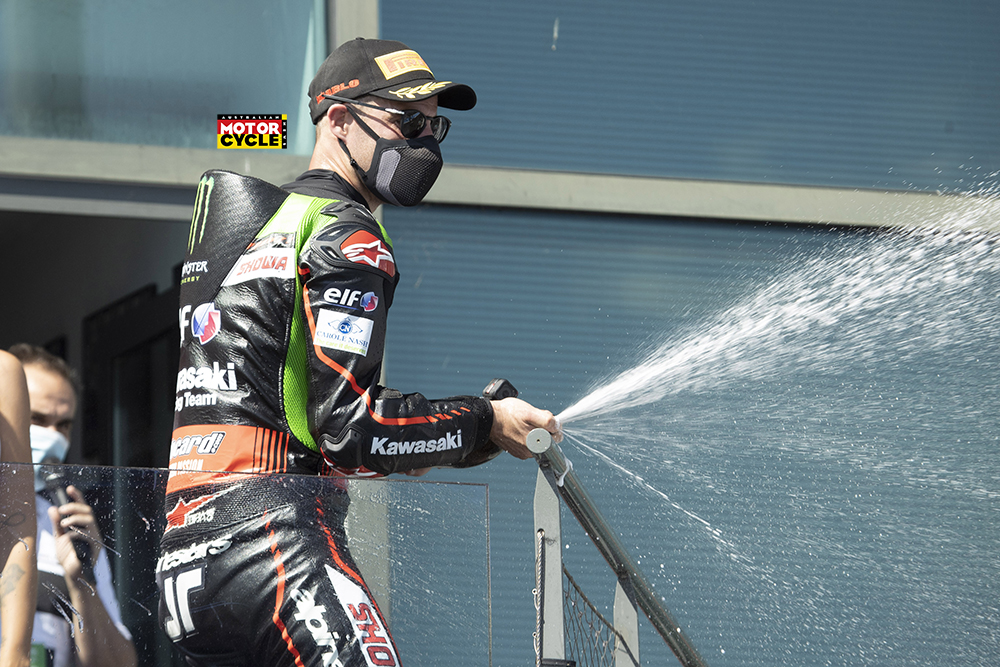