SA’s Sellicks beach race is a must-see biannual event. To allow you to see it through an appropriate lens, we sent along a shooter who specialises in old-school, large-format photography

Beach racing was a hugely popular sport in Australia and New Zealand from the 1920s up until the 1960s, with some events continuing into the 1970s. South Australia’s Sellicks Beach was one of the most famous venues, hosting the Sellicks Beach Race and even Australia speed record attempts.

A re-enactment of the Selleicks Beach Race, held every two years, is proving as popular as the original annual races. This year, despite Covid restrictions that limited the crowd, a record number of entries came from all around Australia to compete.

Organisers have a cut-off date of 1963 to ensure the bikes mirror the period the event celebrates. Many entrants have built motorcycles especially for this race, with Triumph twins being a popular choice.

However, not even the risk of sand damage puts off the owners of such rare and exotic machinery as a 1930 OEC V-twin, a 1950 Vincent Series C and a 1924 Douglas flat-twin.

In the spirit of the meeting we sent along a photographer who specialises in the use of classic, large-format black-and-white cameras. 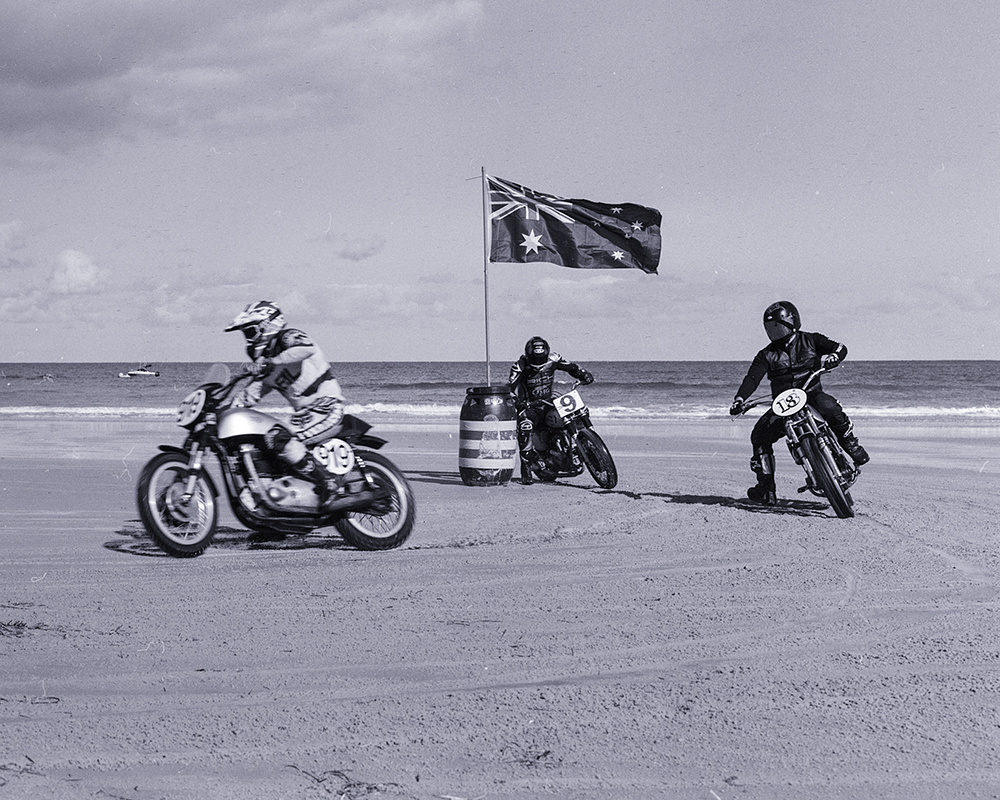 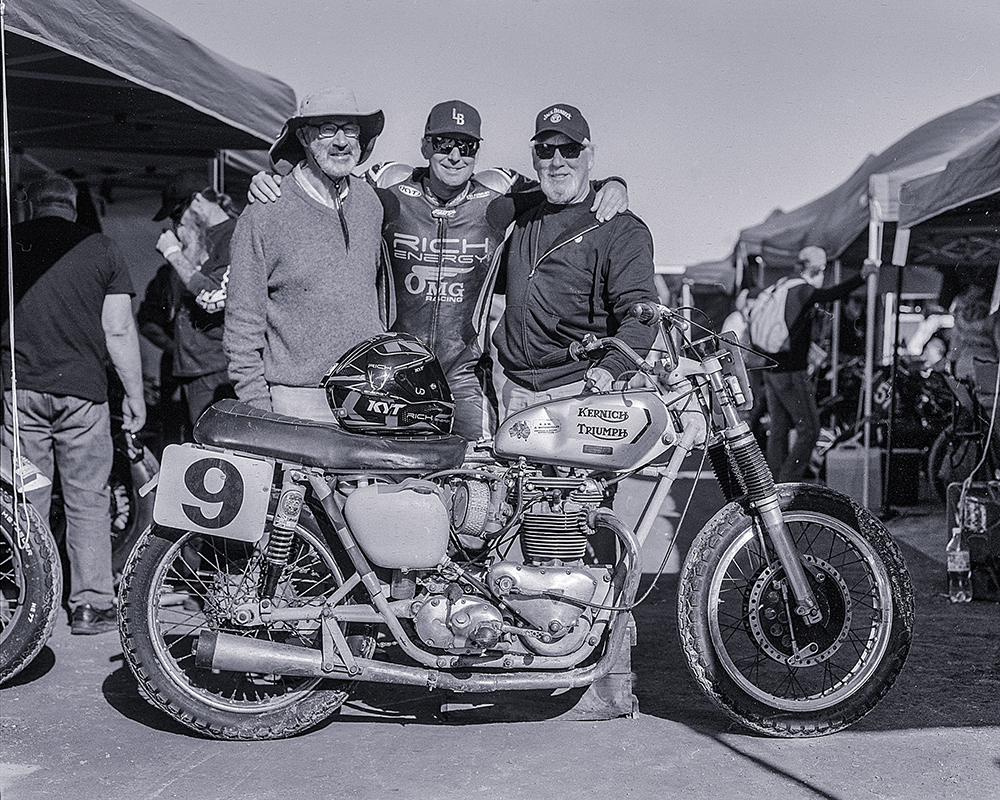 Davo Johnson and Co
Isle of Man TT racer David ‘Davo’ Johnson was back to defend his title as the fastest rider over one mile and he didn’t disappoint. His time of 59.379secs set a new benchmark and involved slowing for two turns around the barrels at each end of the course. His Triumph was geared for 6500rpm at 100mph. Built by owner Dave Kernich for the first Sellicks re-enactment in 1986, it is based on an early 1960s duplex frame. The pre-unit 650 engine has been boosted to 750cc with ARE alloy barrels and fitted with twin carburetors. Dunlop TT100 tyres work well in the sand with reduced tyre pressures. Davo’s dad Murray won the second Sellicks re-enactment on it in 1992 and his son repeated the feat in 2019. Left to right: Dave Kernich, Davo and Murray Johnson. 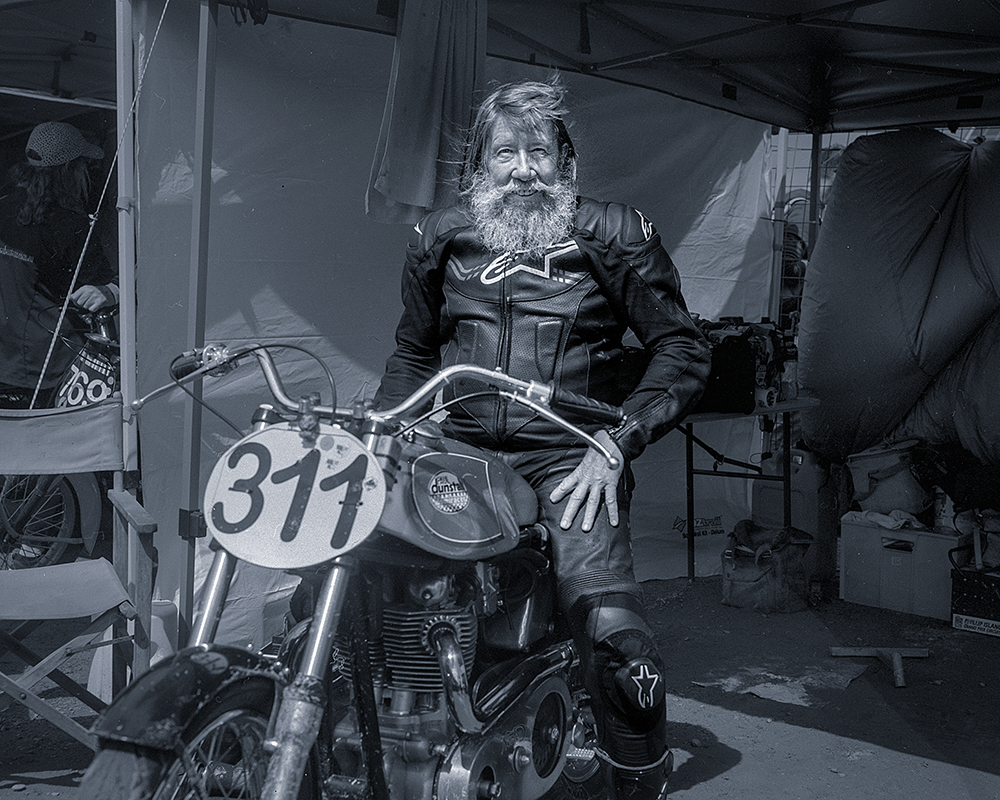 Dan Gleeson’ put cowhorn handlebars on his immaculate Dunstall Norton Dominator 750, ran up the front of his class and won the Best Presented trophy 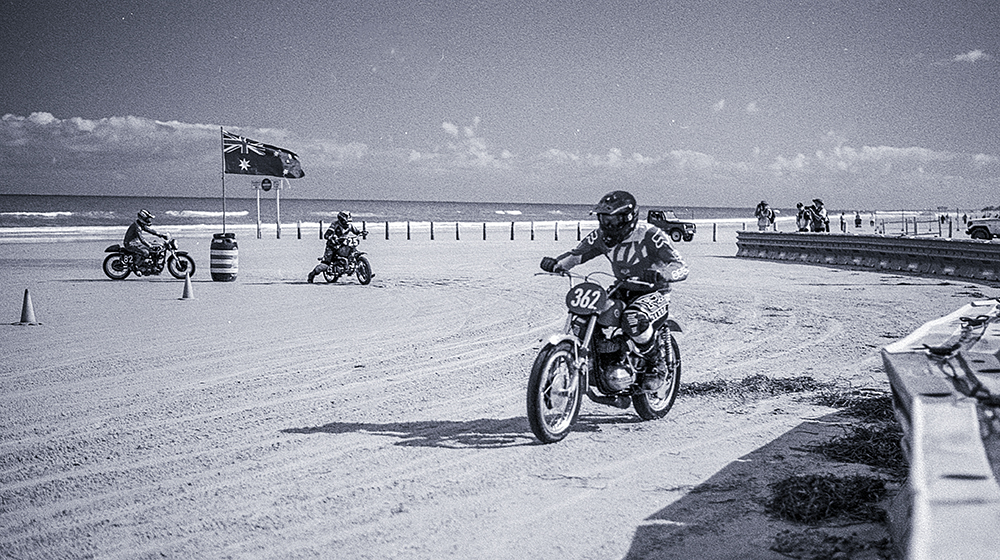 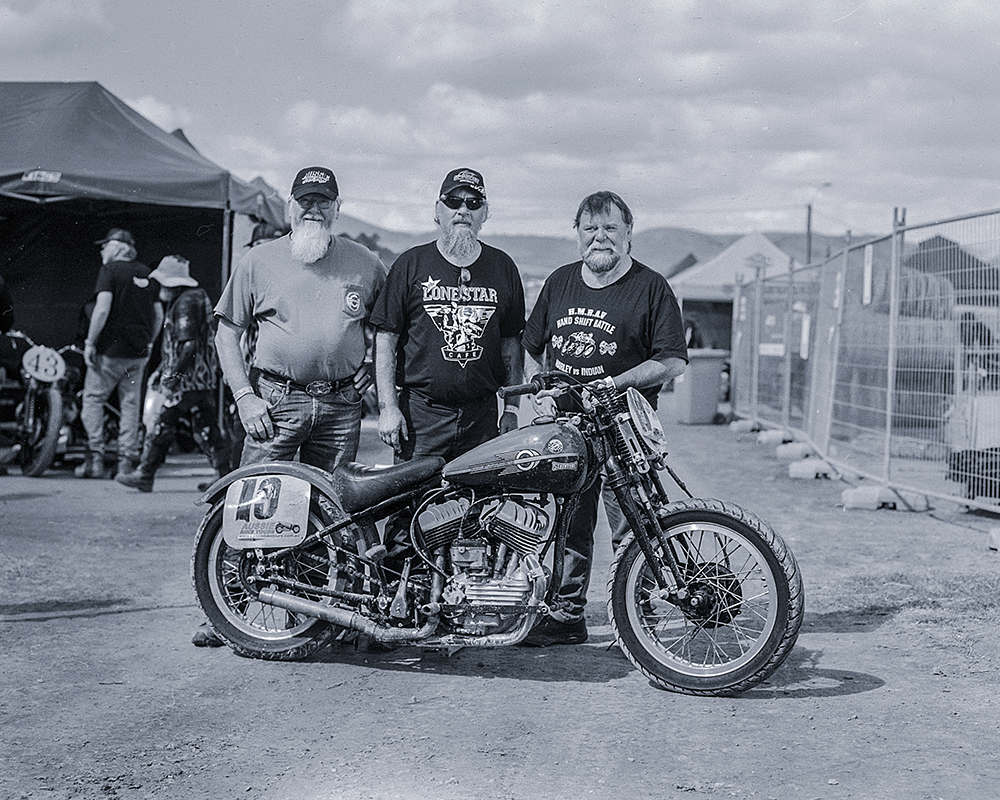 Burt’s boys
Brothers Eddy and Billy Garner grew up watching New Zealand’s legend Burt Munro tune up for his epic ’60s Bonneville runs at Invercargill’s Oreti Beach. Four years after his world record run in the US, Munro recorded a top speed at Oreti of 132.35mph aged 71 years in 1971.
“Those felt like pretty special times, even back then,” says Eddy.
The spirit of the Munro period of pre-World War II modified motorcycles lives on in Australia’s popular Class C hand-change class, which has evolved into an Indian-Harley duel. Eddy has opted for the flathead WLA option, with technical help and support from Billy and friend Kevin Thomson. Their efforts and Eddy’s steady nerves in a pack of big V-twins won him the handshift feature race.
Left to right: Kevin Thomson, Billy and Eddy Garner. 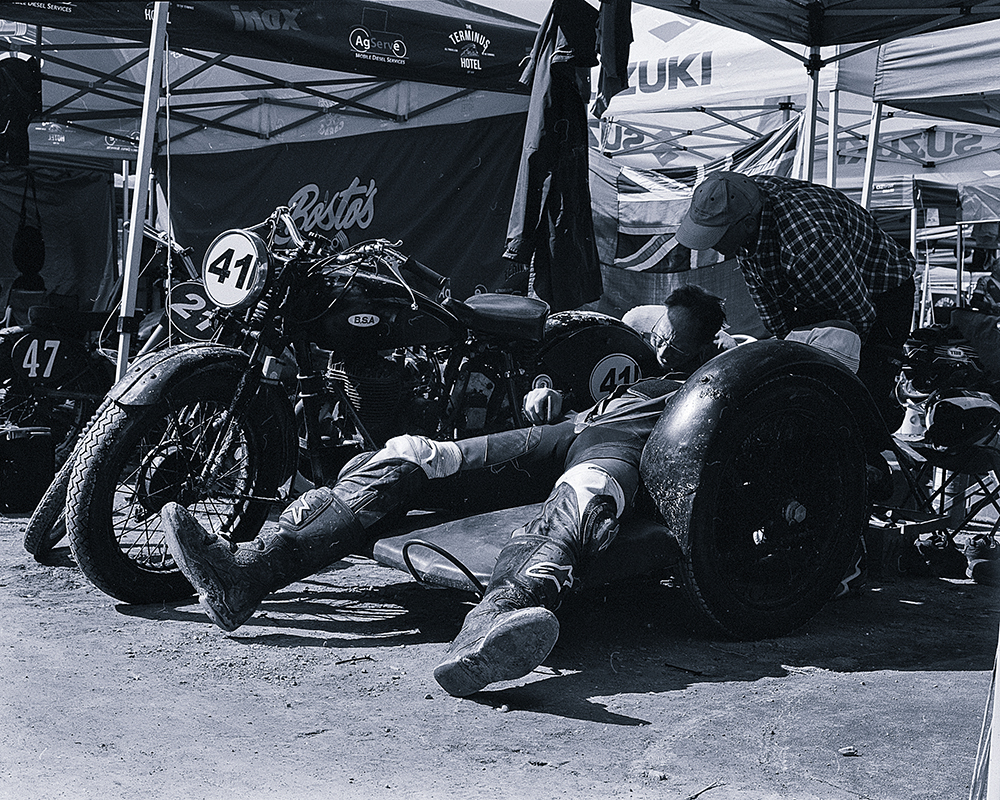 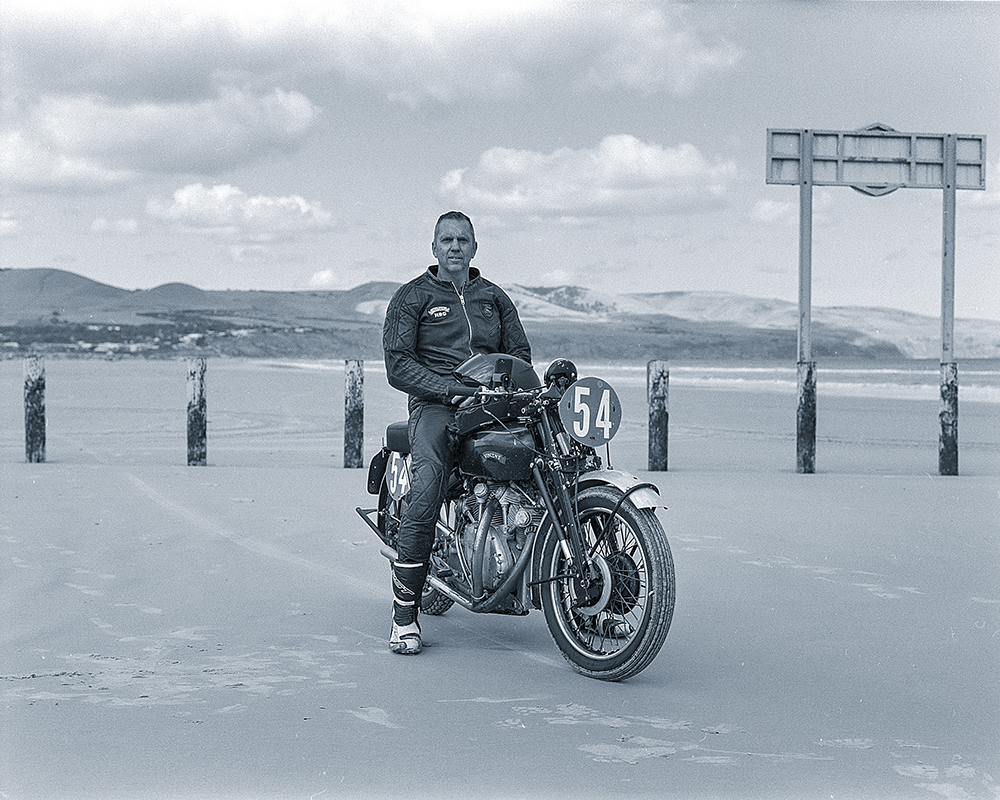 Vincent 1-3
The last place you’d expect to see a newly-restored and road-registered 1950 Series C Vincent is at a beach race. But the Sellicks event spurred David Whitehead to finish his project, put a few miles on it and truck it 1600km down from Brisbane. “I’m not a racer and I don’t have a lot of money, just a real interest in Vincents,” he says. “I wanted to show it off here so people could enjoy watching it like I enjoy riding it.” Whitehead didn’t hang around, getting faster and faster as the weekend progressed and the big Vinnie’s fresh engine freed up. “The speedo read 775 miles before I got here,” he said as he prepared for his last two races. “Now it reads 790 miles.” 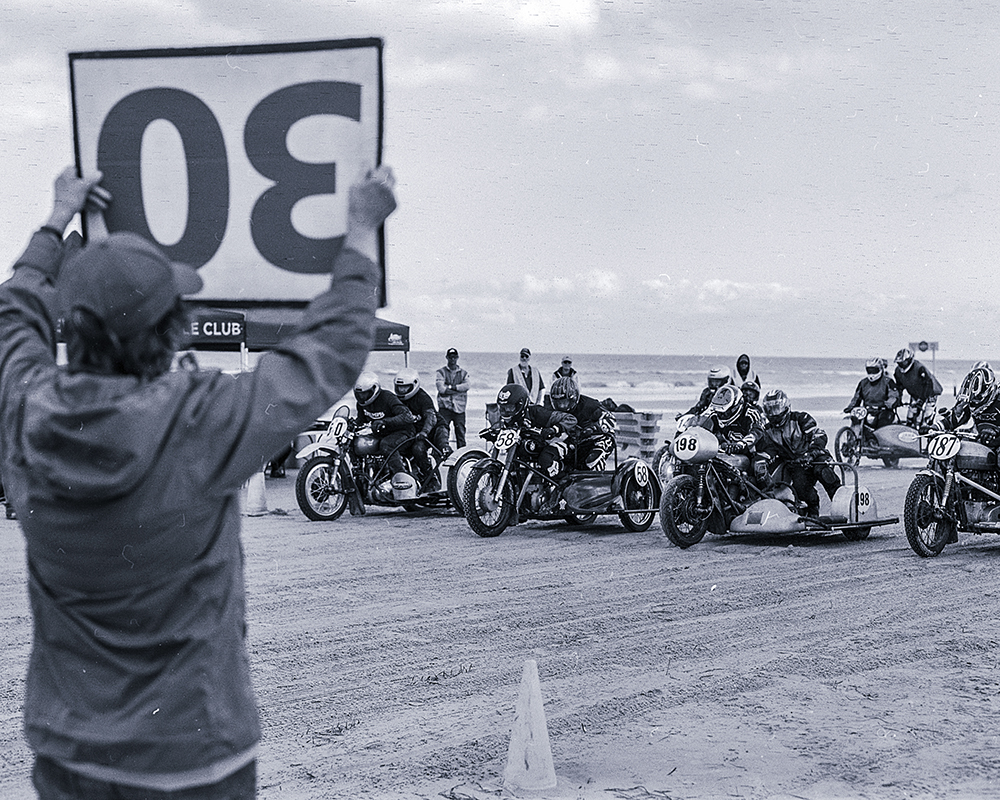 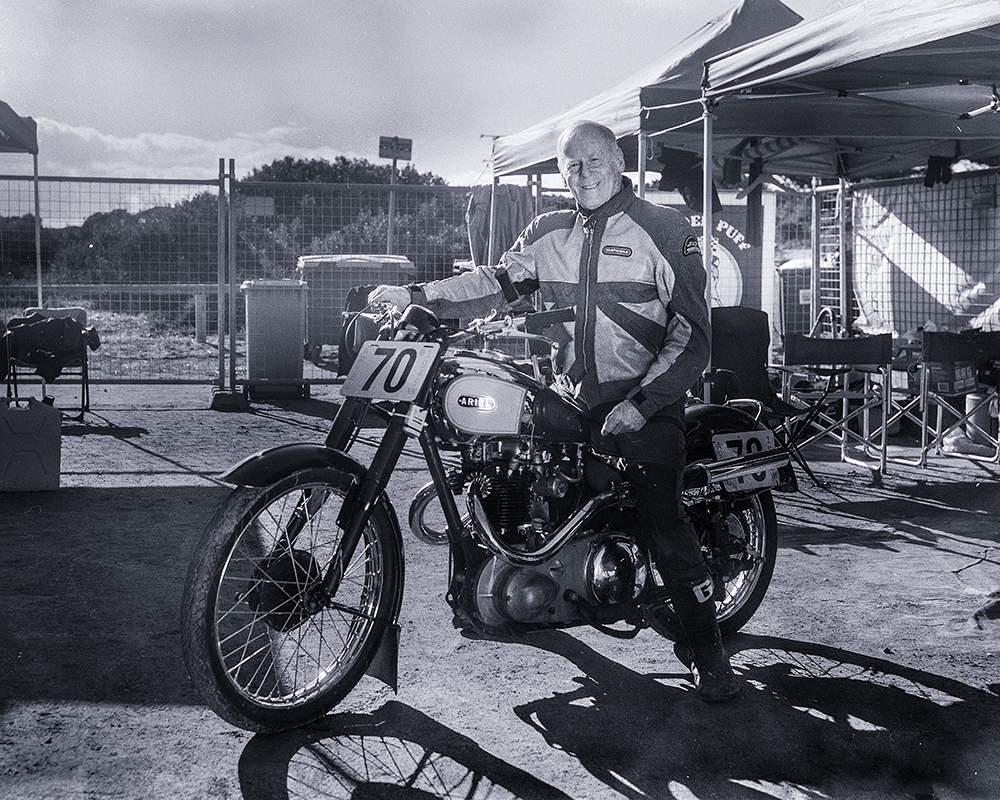 Dad’s bike
Geoff Eardley’s immaculate 1949 Ariel Red Hunter is the actual bike his father, Harry, raced at Sellicks Beach in 1952. “I found it lying rusty and forgotten in a shed and decided to get it back up and running,” says Geoff in a classic understatement. “Dad paid 66 pounds 10 shillings for it new and it was quite a bike for the time.” Ariel’s Red Hunter was one of the best performance models of the 1930s and 1940s. A 500cc overhead-valve single cylinder, it had a twin-port head, upswept exhaust pipes and racing quality brakes. After World War II it was upgraded with telescopic forks and plunger rear suspension. Many Australians, like Harry Eardley, found the Red Hunter made a great weekend racer for events such as Sellicks. 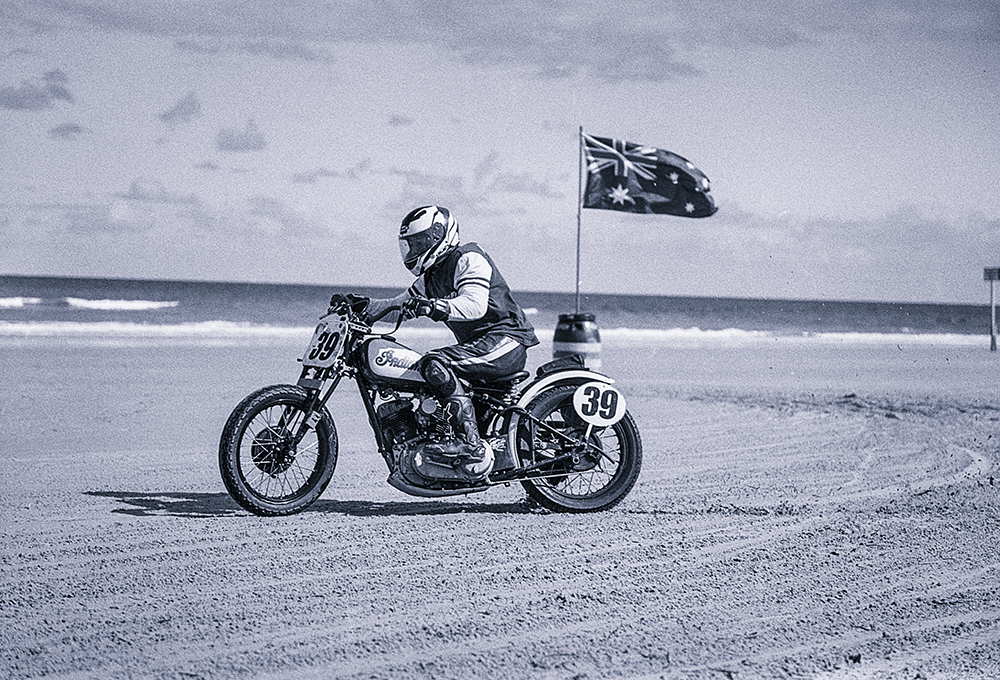 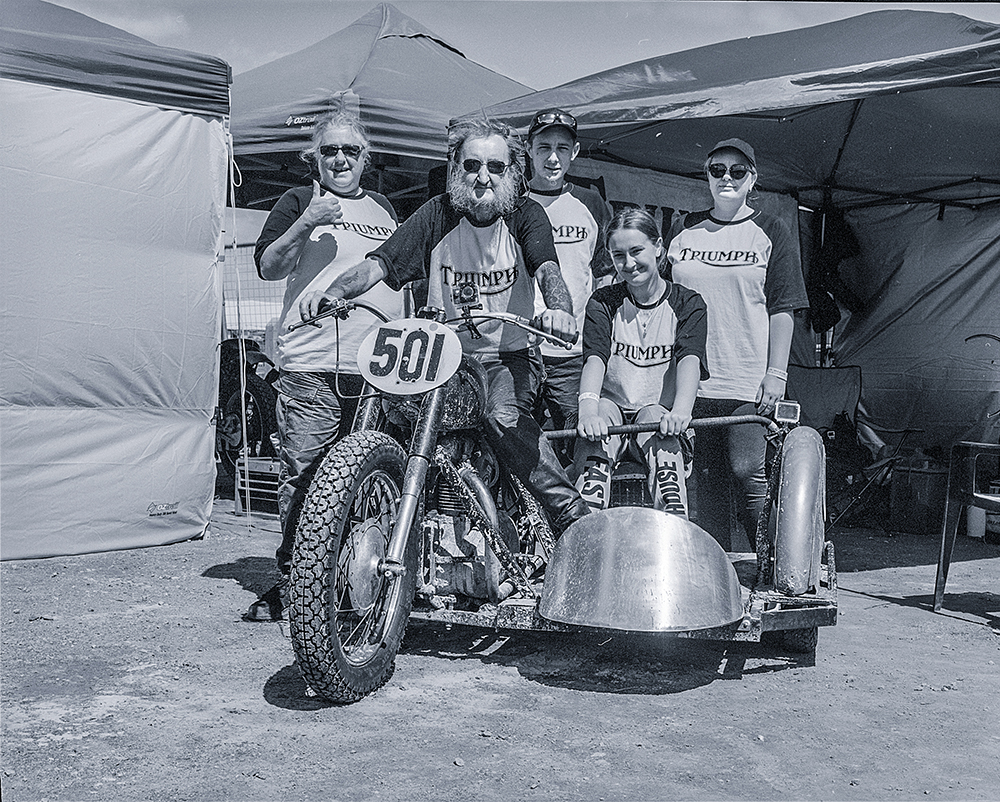 Triumph sidecar family
Long-time Triumph enthusiast David Coles has managed to infect his extended family with the parallel-twin virus. And it can only be a good thing as David’s passenger, teenage grand-daughter Makayla, was supported by the entire family as she made her sidecar racing debut. “I was nervous to start with but I actually found it quite easy, once you balance yourself with what the sidecar is doing,” she said. David built the outfit up out of the stack of parts he has lying around. The 1950 Thunderbird engine, the first year of Triumph’s 650, has aftermarket alloy 750cc barrels for more lowdown grunt. The pair nabbed second place in the handicap race to top off a fun weekend. 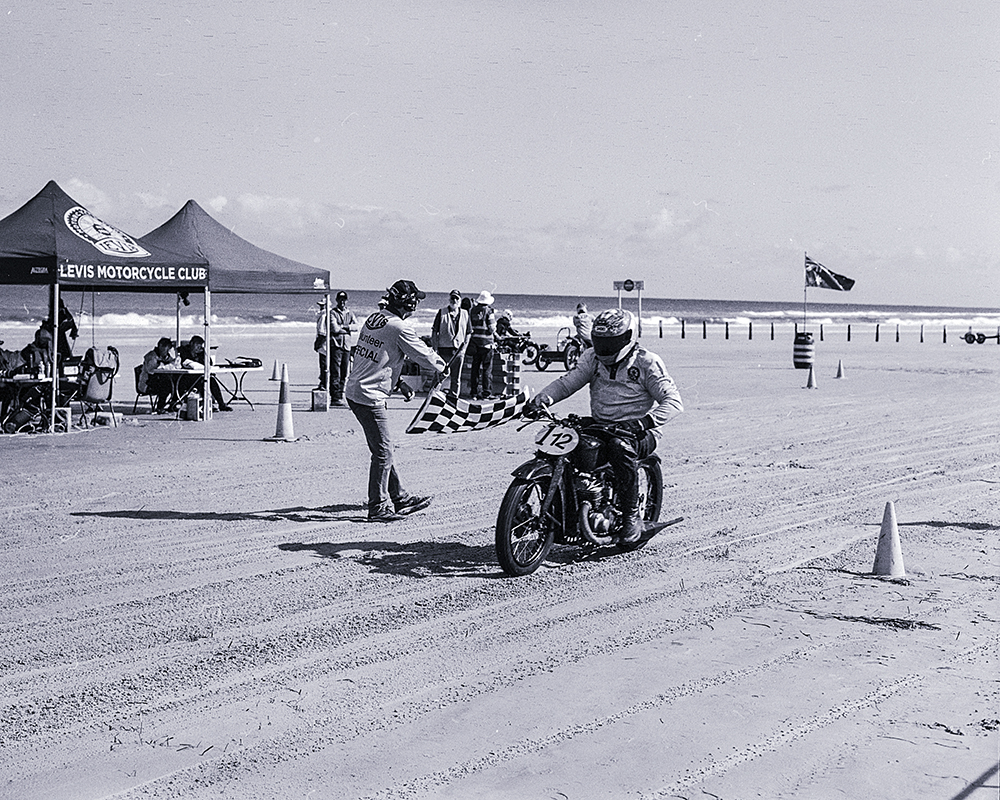 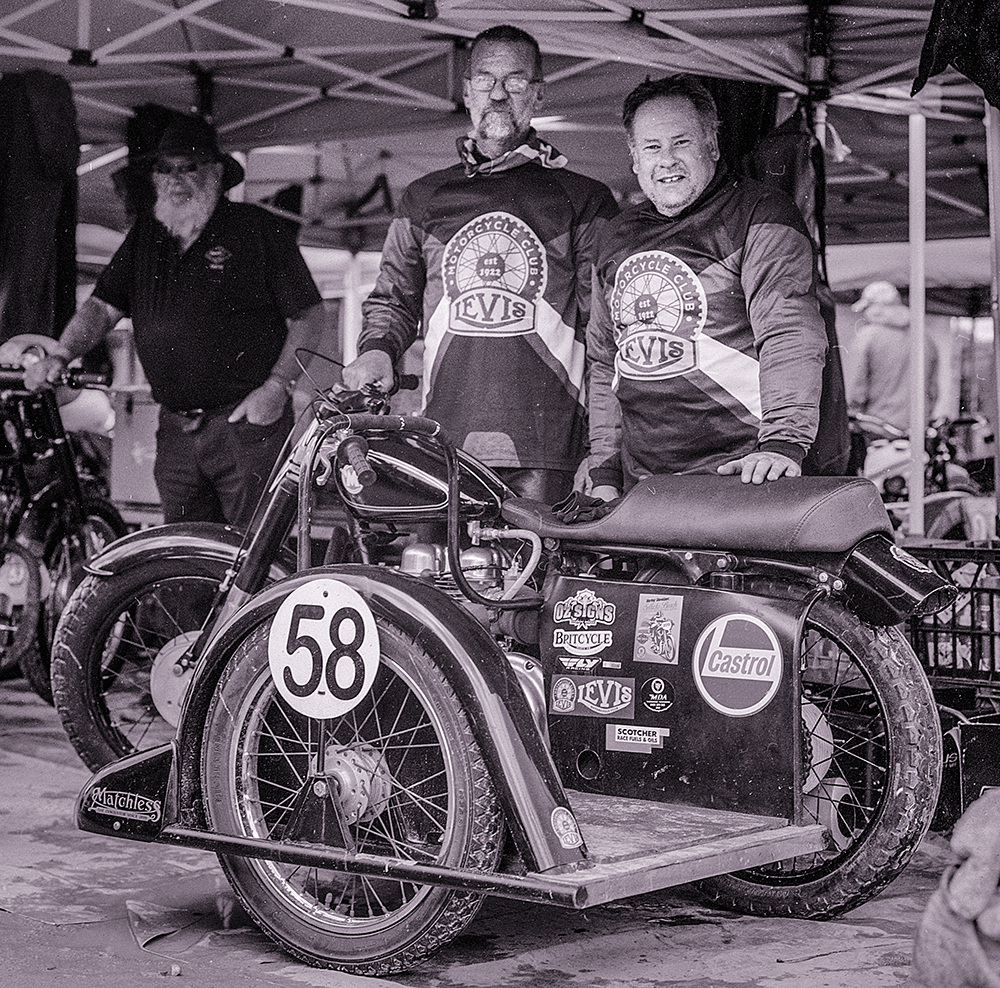 Matchless twin
The Matchless G11 is a fairly rare model, the 600cc twin only being produced for three years in the mid-1950s while a larger version was developed. So it is a surprise to see a model designed for long-distance solo riding being hitched to a sidecar and turned into a beach racer. “It was a barnfind and I built the sidecar so we could go racing at Sellicks in 2017,” says Matt Hundertmark. “I built up the sidecar myself and used part of a Morris Minor bonnet for the front fairing.” The twin sounded crisp and looked the goods with passenger Bruce Davis in the chair. Sadly that old Matchless twin bogie reared its head again, just like it did in 2017. “We keep breaking crankshafts,” says Matt. 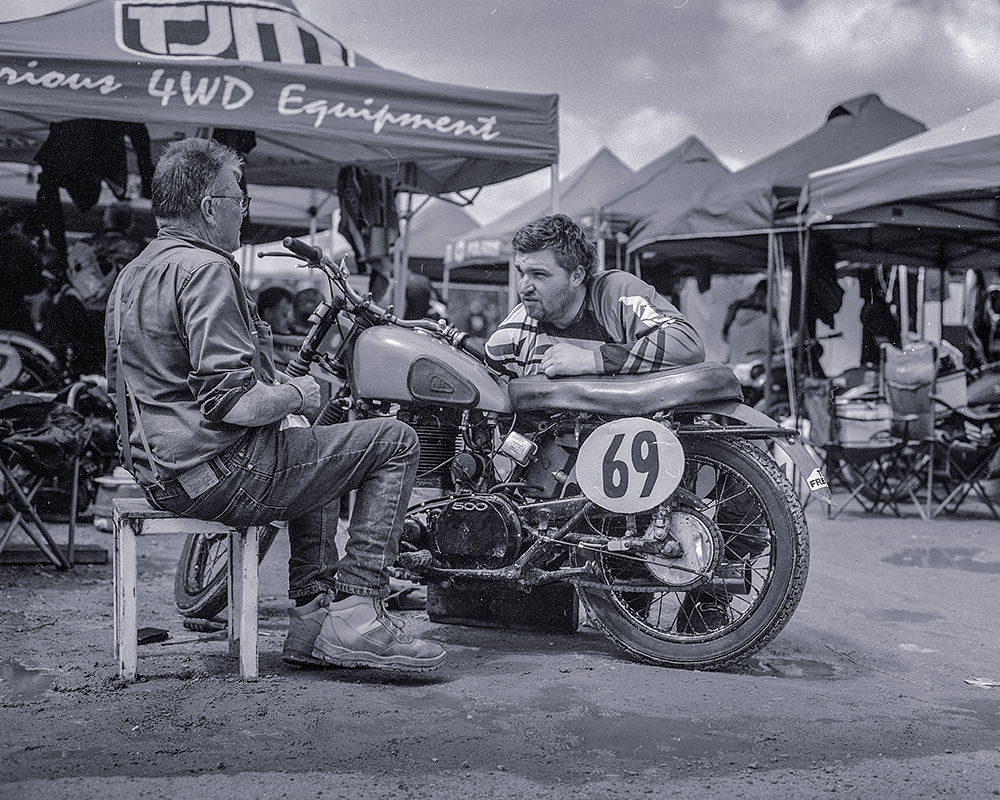 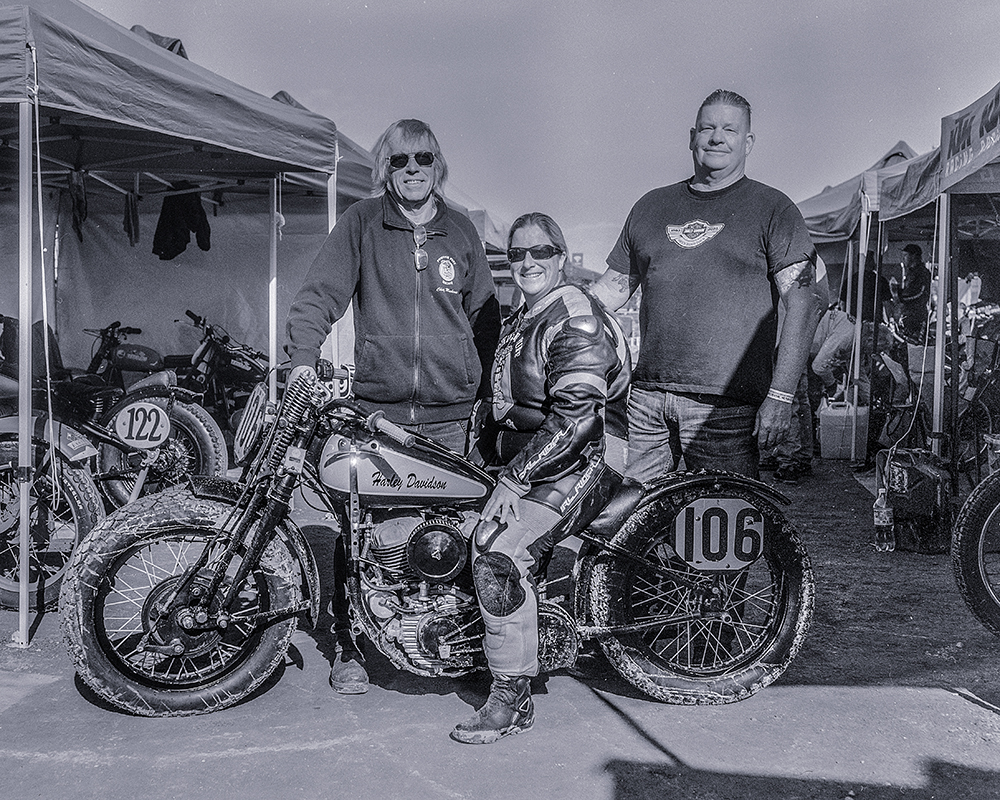 Bianca Bonner
This WR-spec Harley-Davidson flathead has a storied history. It competed at Daytona’s vintage races two decades ago, been a mainstay of the evolution of Australia’s hand-change Class C, and has also raced on the hallowed sands of Burt Munro’s testing ground, Oreti Beach in New Zealand. The WR is a labour of love for rider Bianca Bonner and her father Robert, assisted by Wayne Saunders. “Dad and I started off as Al Fortune’s (original builder and racer now deceased) pit crew at Daytona,” says Bianca. “Every time I ride this bike I think of him and what he did for our sport.”
The WR was the ultimate tune of Harley’s flathead engine, with increased compression and hotter cams. Its tractor-like torque makes it ideal for sand racing. 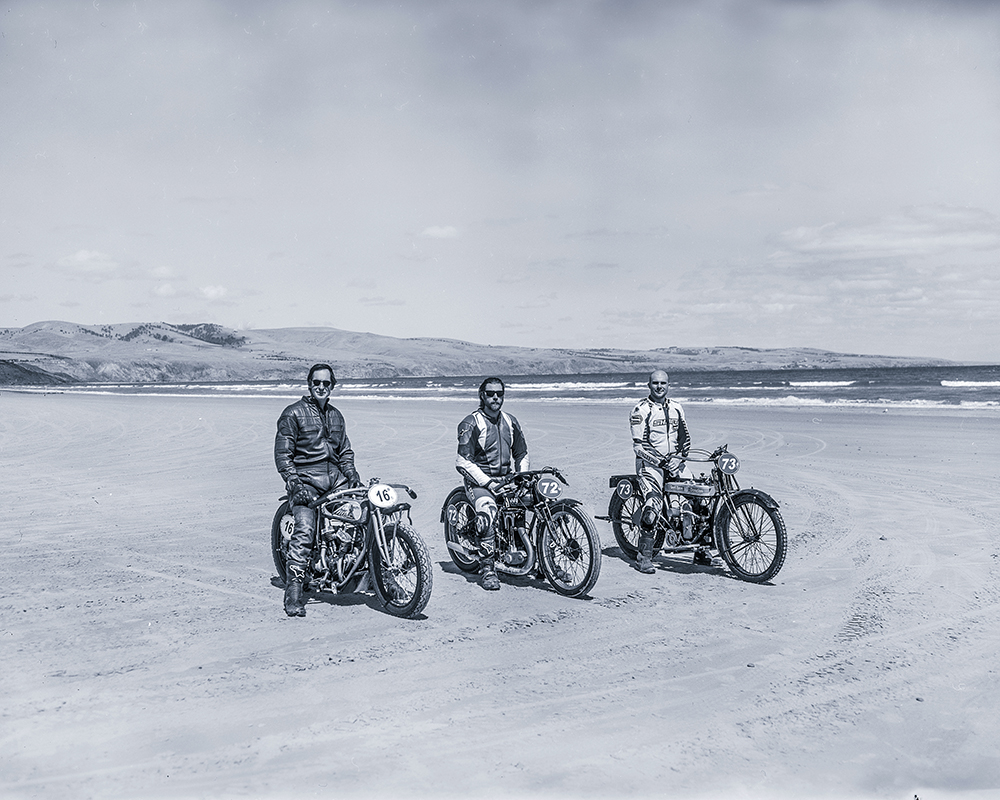 Three oldest bikes
The three oldest bikes competing at Sellicks were all the work of Melbourne-based Hein Otten, whose grandfather manufactured motorcycles in the Netherlands from 1901 to 1912. Hein switched between his ex-wall-of-death 1927 Indian (No 16) , complete with its stubby exhaust pipes, while Stuart Perry was on his AJS Big Port single (No 72) with a UK racing history dating back to the early 1920s, and Dylan Marley was battling the sands on his belt-drive 1924 350cc Douglas twin (No 73). All three were in immaculate condition and testimony to the enthusiasm and ability of Otten to keep them running like this. “My family history is where I get my passion from,” he says.

Award-winning Brazilian-born photographer Andre Donadio uses ancient, large-format, black-and-white cameras to document subcultures of the modern world. The result is moody, evocative, often gritty images that tell a simple story. Donadio shot the Sellicks Beach races with a Graflex Crown Graphic, a 4X5 folding camera favoured by press photographers of the late 1940s and early 1950s. He develops the large negatives in his traditional darkroom, then scans them as digital images. His wide-ranging work can be viewed here and the Sellicks Beach event here. 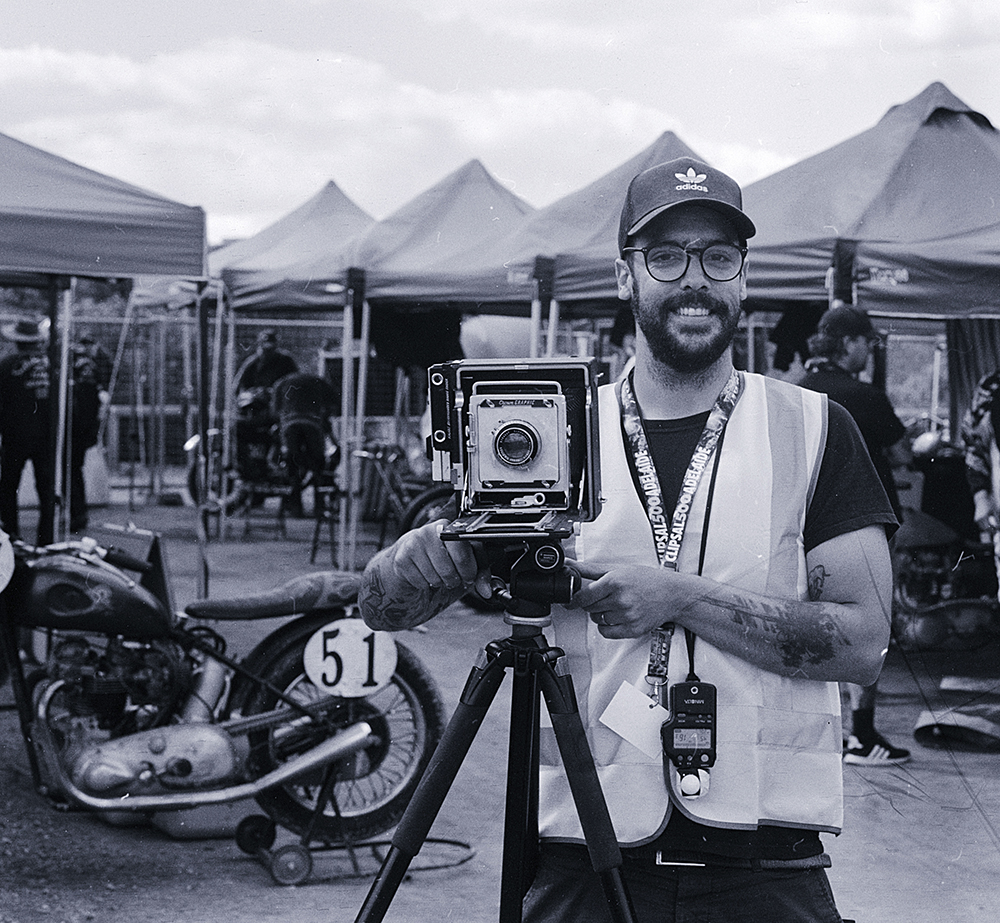