Bending WorldSBK’s rulebook used to be the domain of Ducati with its various homologation specials, which bore only a visual resemblance to its road-going siblings. Extra capacity, high-spec engine internals, even a different bore and stroke was all fair game for the Bologna manufacturer in order to secure that top step. And now Kawasaki have got in on the rule-bending act with its new ZX-10RR.

Making very little apology for the fact that it has updated the RR solely with the intention of overcoming WorldSBK’s rules, Kawasaki has essentially taken a look at how to increase the Ninja’s rev limit. Why? Because the WorldSBK rules state that you can only run three per cent more revs than the homologated roadbike has (the 2018 RR has a 14,250rpm limit, so that’s 14,700rpm in race trim) and then restrictions based on race results will see this limit drop. When you have won as many WorldSBK races and titles as Kawasaki has in recent years, these restrictions soon start to bite, and reigning Champ Jonny Rea’s racebike now redlines below the roadbike, due to being docked revs.

So fixing the pickle is easy; increase the homologated roadbike’s rev limit and then any WorldSBK-implemented rule restriction will have Rea’s machine back to where it needs to be. To achieve the extra 600rpm the ZX-10RR now boasts, Kawasaki has redesigned its cylinder head and added a finger-follower valve actuation system to all 2019 ZX-10R models, although only the RR gets the higher redline.

BMW was the first of Kawasaki’s rivals to do this a decade ago in the S 1000 RR, and those of a geeky disposition will recall Kawasaki ran them on its 1986 GPX750R. Those with even less social skills will be aware this was the very bike which gave Kawasaki its first WorldSBK win in 1988, with Frenchman Adrien Morillas at the helm.

The good news for racers doesn’t stop there, as the homologated RR model also gets titanium Pankl conrods as standard fitment. Weighing 102g less than the steel items in both the R and SE (and the previous-generation RR), this 408g weight reduction sees a five per cent decrease in crank inertia, helping the RR’s motor pick up revs faster and gain a bit of power and torque throughout its rev range.

But there is a downside. Because they’re full-on race-spec items, the RR’s price has increased by around 30 per cent when compared to last year’s model. On the plus side, Kawasaki is only producing 500 RRs, so it is an exclusive model, but that’s still a hefty hike in price. And while the on-track advantages are clear,  road riders will rightly feel a little short-changed as, aside from the head, the 2019 ZX-10R range has received no significant updates – no new electronics, no new look and most annoyingly of all, no new TFT dash. But more of that later… 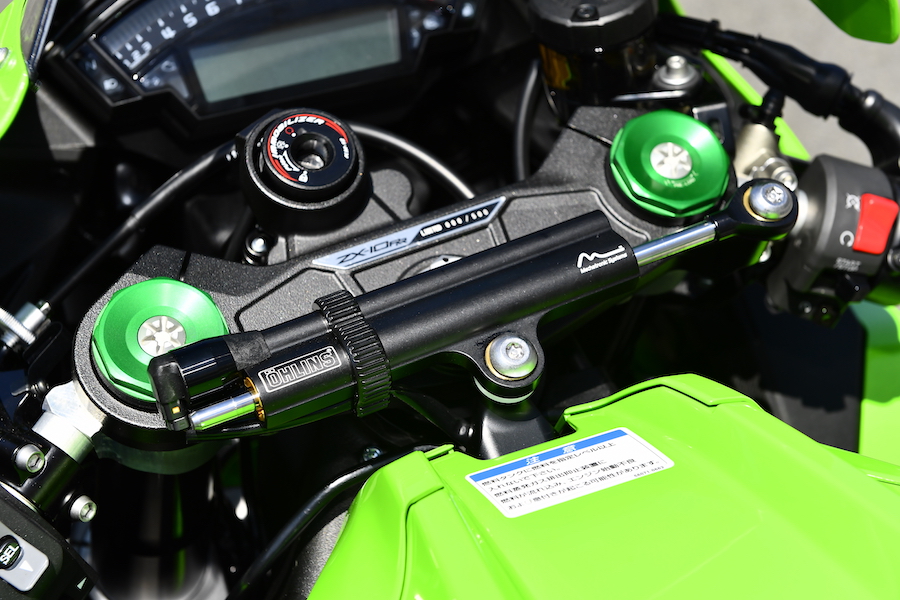 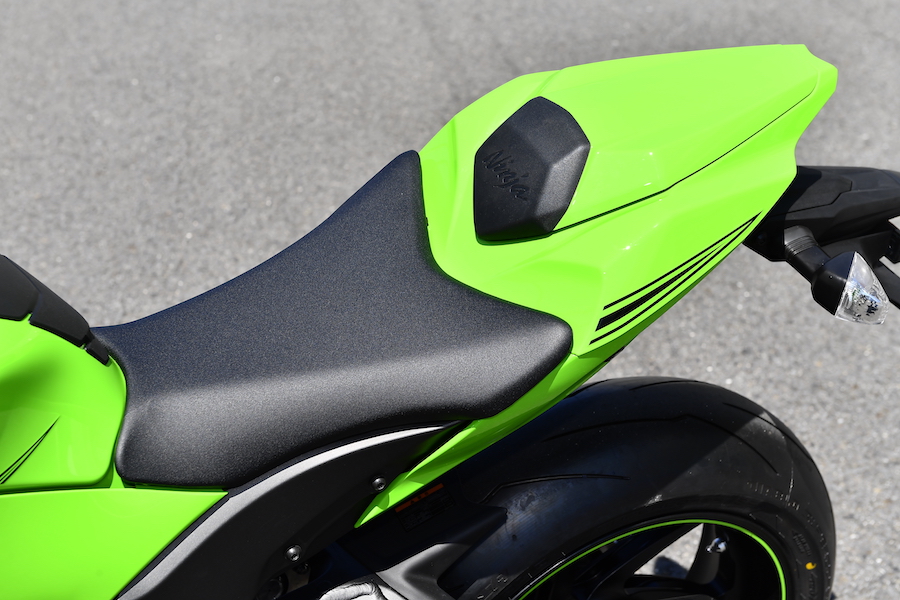 While the RR is a bit of a disappointment visually in its plain green (to my eye the stocker’s race-style paint scheme is far better), as soon as you open the throttle you can tell something special is happening inside. Not revolutionary, but certainly special.

If you were presented with a 408g sirloin, most of us would struggle to eat it, but that’s how much weight Kawasaki has shaved off the conrods, and as a result the inline four’s pick-up is faster than that of the standard machine, and significantly more responsive to throttle inputs. There is a new lightness to the way the motor revs and, surprisingly, also a strong midrange.

On the road the RR will still feel a bit on the breathless side low in its rev range, but on track

there is now a strong midrange drive followed by a thwack of top-end thrust once the dash’s rev counter (which is ugly, old-school and hard to read) turns from orange to red as it passes 8000rpm. I wouldn’t say it devours gears with the same gusto as the Panigale V4, at which you can’t throw gears fast enough when you pin the throttle, but it is certainly noticeably faster revving than the old RR. And sprightlier. 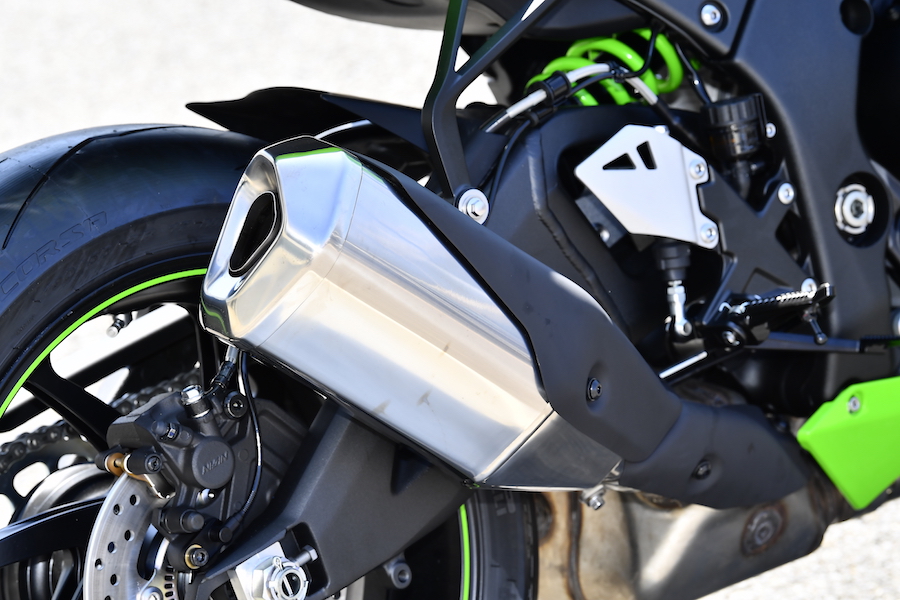 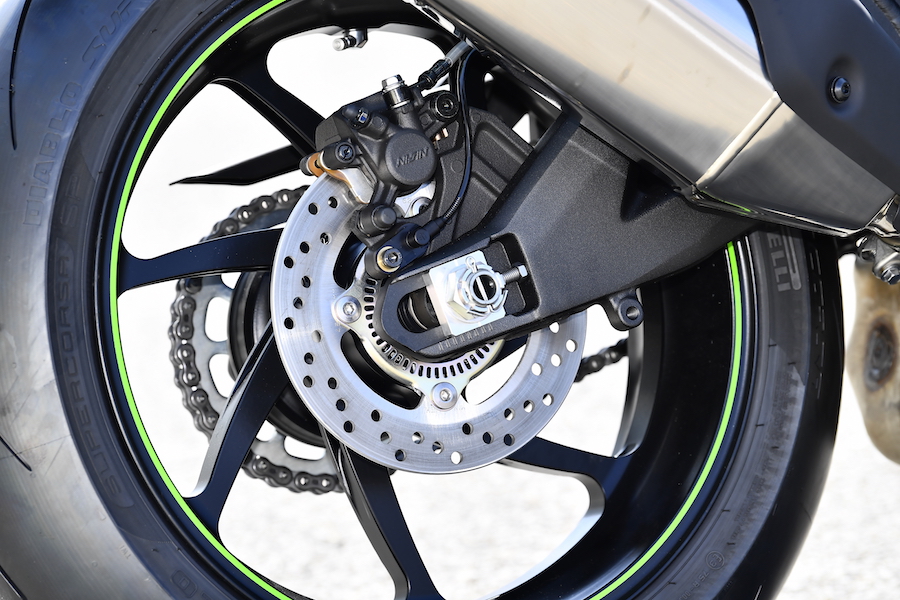 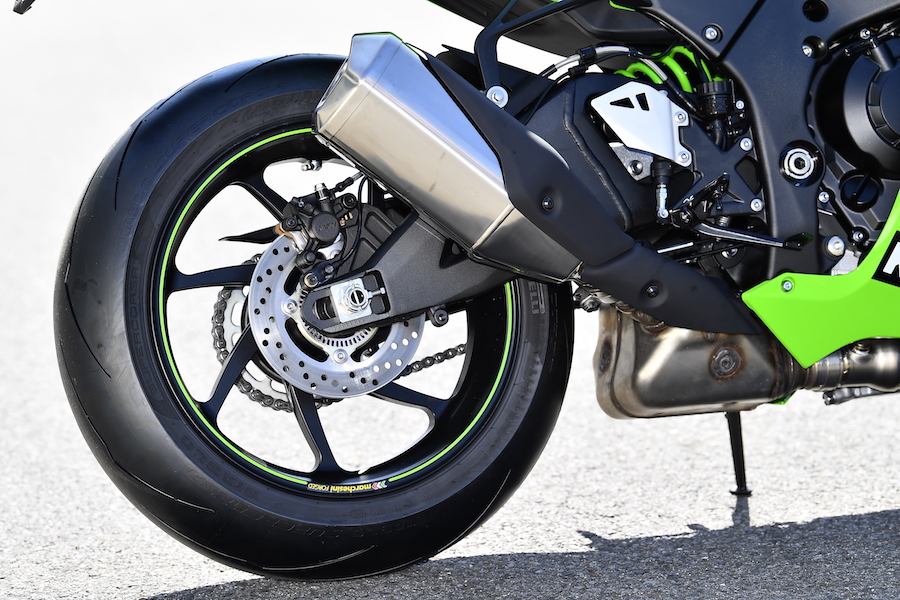 Although ultimate top-end performance remains similar, it gets to this point with more enthusiasm. And there is also a handling benefit, although this is harder to quantify.

When asked, Jonathan Rea singled out the Kawasaki’s chassis as the major advantage he has over his rivals and when you ride the ZX-10RR on track, you begin to understand it. Although physically unchanged from the outgoing model, Kawasaki claims the weight saving within the RR’s motor, and its five per cent less crank inertia, gives it better corner-entry speed and better feel mid-corner, thanks to the changes in the gyroscopic forces. It’s hard to accurately gauge this claim, as we didn’t ride the stock ZX-10R back-to-back with the RR, however what I can say is that the Ninja is a sublime handler.

We tested the Ninja at Kawasaki’s own Autopolis test track in Japan, which was designed for F1 cars and is also used for a round of the Japanese Superbike championship. There are several sections where you have to haul the bike from kneedown in one direction to kneedown in the other while in second or third gear, and through these areas the RR felt effortless. When fully lent over the Ninja was absolutely glued to the track and it also remained stable on the straight, with no hint of a weave (the RR has an Öhlins electronic steering damper like all ZX-10R models) when flat-out in top gear. And it’s also super planted in the braking zones. Unchanged from last year, the Brembo M50 monobloc calipers with their angle-sensitive ABS don’t disappoint on the RR. However what I wasn’t expecting was how much feel Kawasaki has introduced into the Ninja’s braking.

Usually bikes with braided lines have a bit of a dead feel at the lever, but on the RR you get a bit of squish on the initial part of lever travel that makes the brakes bite hard, but not too fiercely. Then, when you need to really bury the front into the ground, the final part of the lever’s travel noticeably ups the ferocity of the bite. To be honest, I can’t see any racers using the cornering

ABS system, but it is the same set-up on the stock ZX-10R so trackday riders will enjoy its benefits. And Kawasaki’s excellent up-and-down quickshifter, which is now standard fitment on all ZX-10R models for 2019 (the RR’s has a quicker cut-time due to the faster revving motor), works seamlessly on track. On track the RR feels every bit the honed race machine that Kawasaki has always aimed it at being, however I was truly surprised to discover that it also has a softer side. Luckily or unluckily, depending on your point of view, Japan experienced its worst typhoon in about 30 years when I was riding the new Kawasaki and that meant my second day on track was a washout. Despite being armed with Pirelli wets, I wasn’t particularly relishing the thought of taking a 204hp Superbike out on a damp track, however the RR was unbelievably easy to ride.

The damp track highlighted just how smooth and predictable the RR’s throttle response was, something I had noticed in the dry but assumed was more down to the fact I wasn’t needing to be that gentle with my inputs thanks to the grip levels. In the wet, you have so much control of the power and this, combined with Kawasaki’s excellent electronics package with its traction control and cornering ABS, made the RR a joy to ride on track in tricky conditions. It may look bold and brash, but the Ninja is actually a big pussycat. A bloody fast one, but a pussycat nonetheless.

To be brutally honest, this is a lazy update of a model and has only been done to ensure Kawasaki can keep up its winning run in WorldSBK, Superstock and domestic club racing. It is most certainly not an update aimed at road riders, or we would have seen a TFT dash at the very least, and a slight restyling wouldn’t have gone amiss either. So why bother?

Kawasaki doesn’t actually sell that many ZX-10Rs anyway and the WorldSBK team’s role is to provide publicity on the world stage to encourage riders (especially in developing markets) to buy into the brand and therefore push sales of their less-expensive high-volume machines.

It’s not a bad ploy; running a successful WorldSBK team costs about a tenth of fielding a MotoGP squad and even then, as KTM, Suzuki and Aprilia are demonstrating, getting to the front is still one hell of a struggle. But what does it mean to those who aren’t running at the sharp end of WorldSBK? The ZX-10RR will certainly benefit racers – it is a far more accomplished track machine than the previous and disappointing RR. Racers always want more power, better tune-ability and a faster motor and that’s what Kawasaki has supplied in the 2019 version. And in this context the hike in price isn’t such an issue, although I feel a data-logging system and a race exhaust as standard would be a nice addition on a premium RR model.

However, for road riders it’s a different story. To a road or track-day rider, the RR is an expensive homologation special that, while boasting an improved engine, doesn’t quite do enough to justify investing in. In fact, I reckon you would be better off buying a stock ZX-10R and spending the cash you have saved on track days.

The Ninja is a wonderful track bike (although annoyingly still lacking low-down torque on the road), but I honestly think Kawasaki missed an opportunity to give it a decent refresh.

Aside from an up-and-down quickshifter there is no discernible reason to buy a new 2019 ZX-10R (they claim virtually the same performance figures), but adding an on-trend TFT dash and a new fairing would have given it a way better chance in the showrooms.

I am absolutely certain that the 500 ZX-10RR machines will sell like hot cakes, but I also reckon dealers will struggle to tempt riders into updating to a machine whose only significant changes are hidden underneath a red rocker cover. And you can’t even see that red cover unless you take the fairing off!