I love getting these calls from Dobie: “Steve, I need you at the track for a launch, Australian Superbike champ Josh Waters is going to be there and so will a truck-load of Suzuki GSX-S and GSX-R models – oh, and you’ll need your leathers.”

It briefly crossed my mind that Suzuki has already launched its GSX-R and GSX-S1000 models, as well as the 750cc and 250cc versions – and I’d even tested Josh’s title-winning bike late last year – but who was I to ask questions.

He gave me the address, and the night before I gathered up my gear and punched in the co-ordinates. It suddenly made sense: the Westgate Go Kart complex. The next morning, I arrived to indeed find a mixture of GSX-S and GSX-R machinery but, just as I (eventually) suspected, it was Suzuki’s brand-new range of 125cc models that will be hitting Aussie dealerships in April. Both a naked and a faired model which, to look at, replicate their big-bore counterparts remarkably well.

Both bikes are underpinned by the same water-cooled 124.4cc single-cylinder engine good for 11kW (15hp) and matched to slick six-speed gearbox. The cylinder and piston have received the same attention as Suzuki’s racebikes, with light weight being key and special coatings adorning both. Liquid cooling means tolerances are tight and that allows accuracy and more reliability to be engineered in to the build. 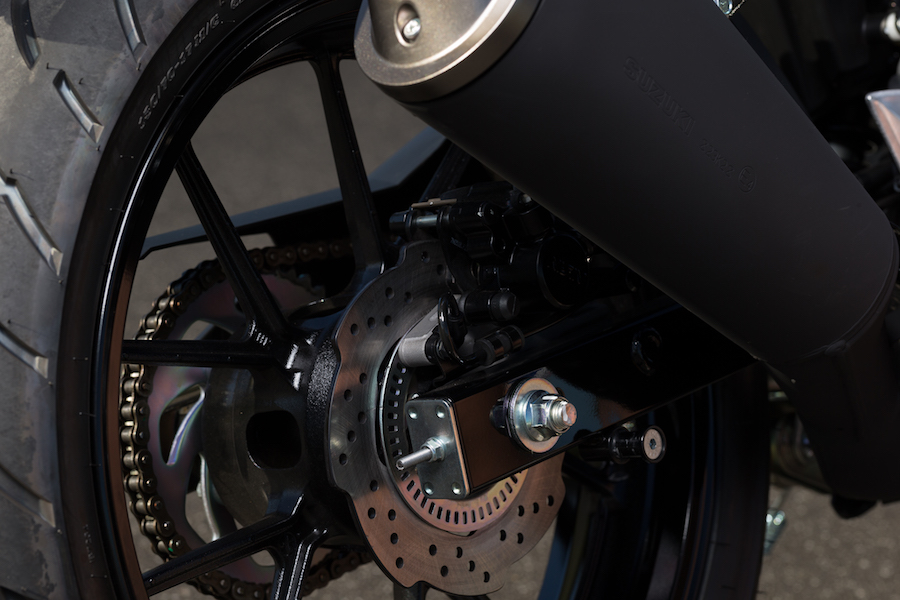 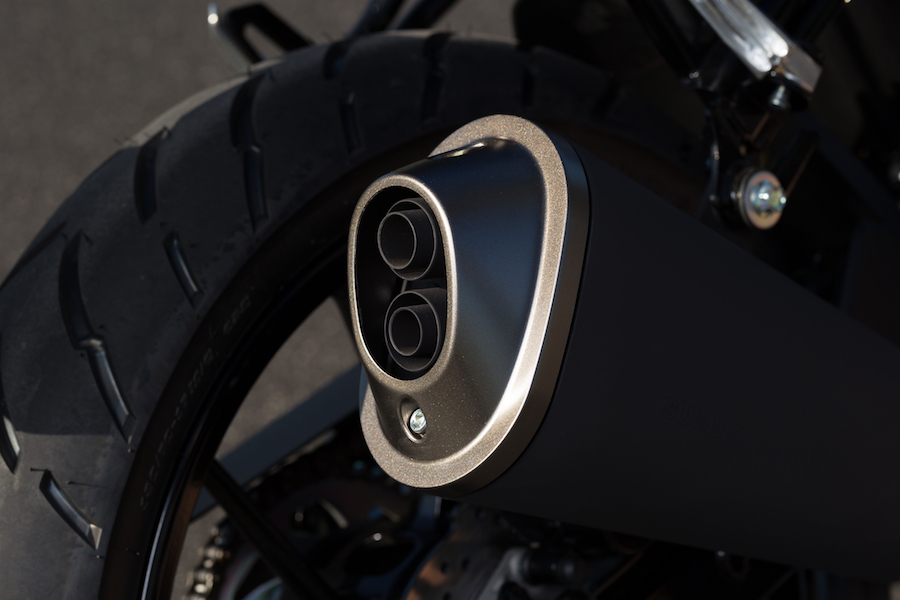 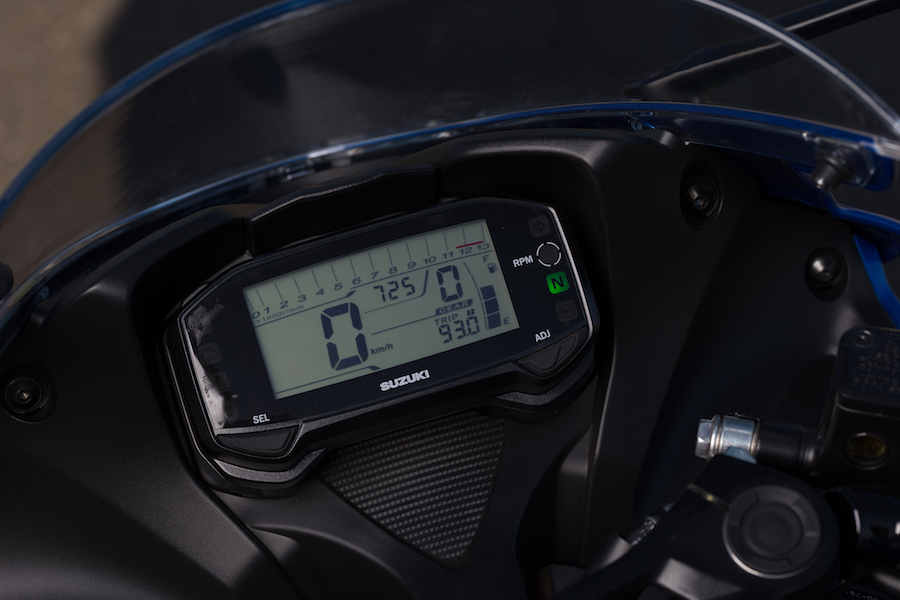 They both share the same chassis, too, with a basic spar frame running down from the head stock before splitting into a twin-tube motocross-style affair. Keeping it light was key, as was a big steering lock for tight going, and it was computer designed in a bid to achieve the most efficient high-performance, low-cost ratio.

Ergonomically, it’s not a big bike. At first it almost feels like a toy, but it’s not long before it starts to feel like a real motorcycle and, thanks to the importance placed in the design phase on weight and compactness, it’s one of the most confidence inspiring packages to ride in its class.

It’s cheap to run, too. The bike I was thrashing around on track used just three litres per 100km, and that was giving it the berries (and then some).

The reason it’s so economical though is simple. It’s got a high-tech electronic fuel injection system metering the fuel that not only gives it class-leading power, but also ensures the engine meets the tough Euro4 emission standard.

Another big drawcard is the new Suzuki duo are the only ones in their class fitted with ABS. We have been talking about ABS for years now and, as someone who rides different bike on a regular basis, it’s a must – especially if a rider is inexperienced. So kudos to Suzuki for the added investment.

As well as the lightweight fairing, the R-model sports some extra features. There’s a keyless ignition, how many sub-$4k vehicles can lay claim to that?! The seat-to-footpeg position is the same on both bikes but the R-model has slightly sportier ergonomics due to the clip-on bars being 100mm lower that the S-model’s. 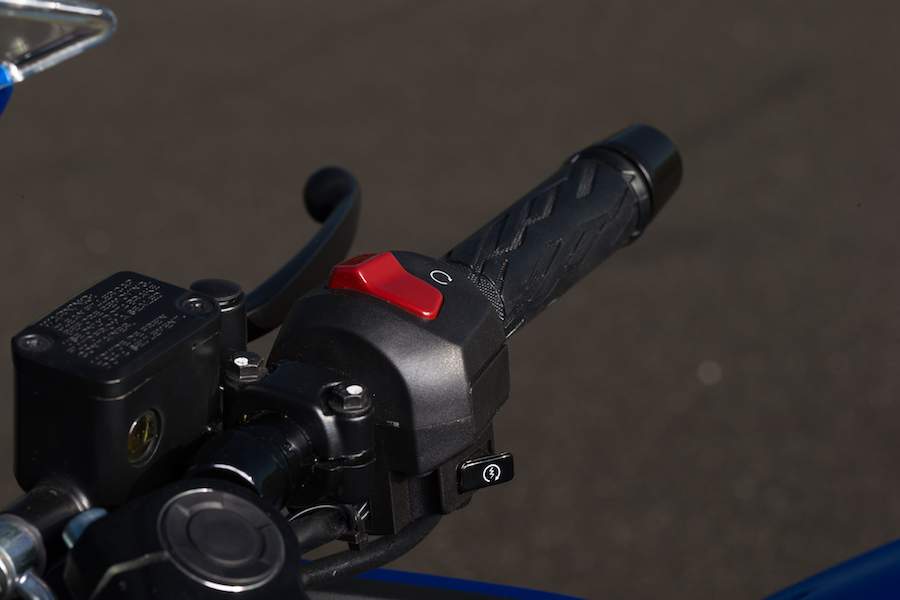 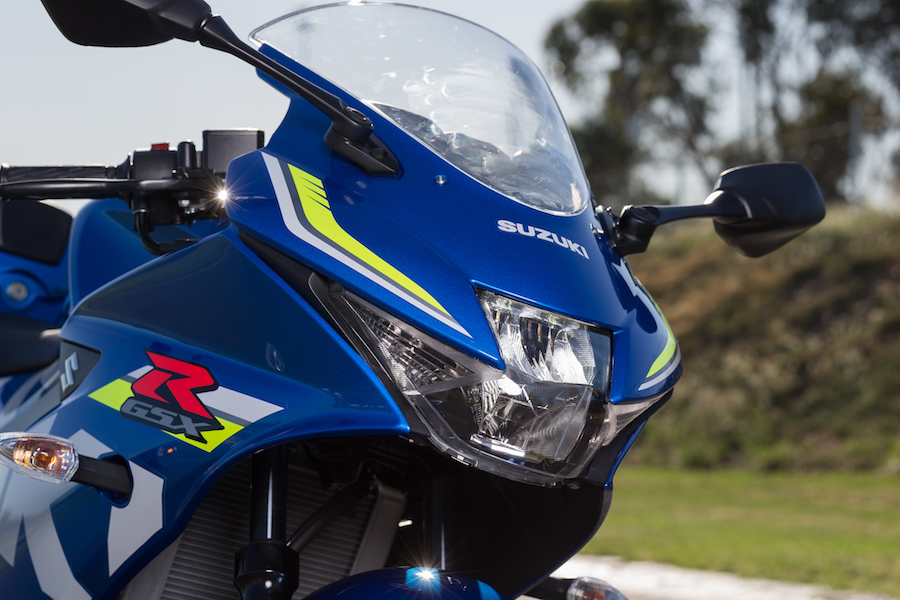 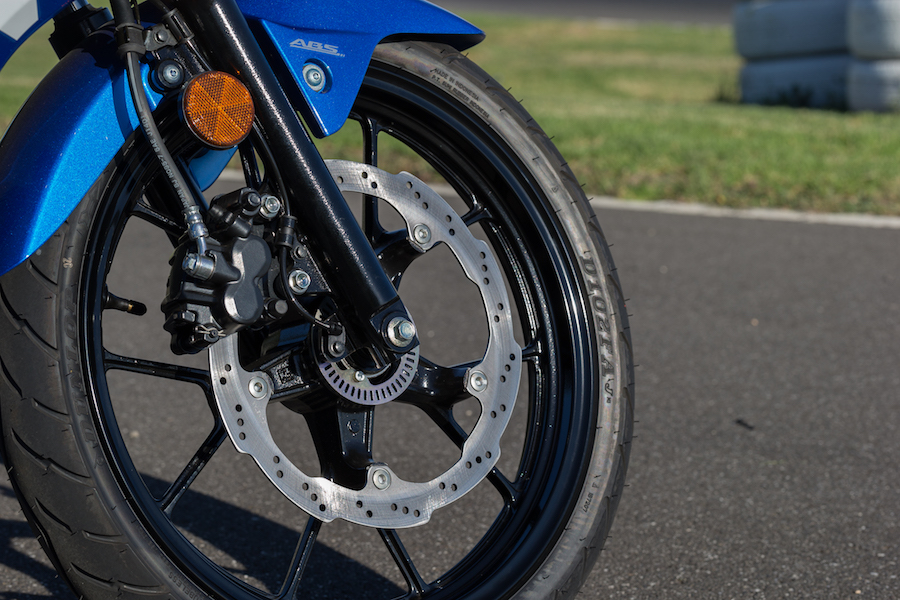 For the price (more on that later), it’s incredible the amount of tech that has been built in to the two machines and, while we rode the R on the go-kart track later that day, we started off our morning with a coastal run passing Melbourne’s F1 Grand Prix Circuit through Port Melbourne, St Kilda and along Beach Road. This little run was ideal for the S-model with some great views, a bit of traffic to dodge as well as some open spaces where you could just take in the bike’s attributes. It was also good being able to ride side-by-side with Josh Waters because that’s never gonna happen on the track!

The first thing you notice when you climb on board is how light this bike feels and how nimble it is. If you had to snake your way through peak-hour traffic gaps, there probably isn’t a bike better suited to the job. The wide lock-to-lock steering ability lets you swoop into any space without fear of not making it as you can almost perform a 90-degree turn if you need to. 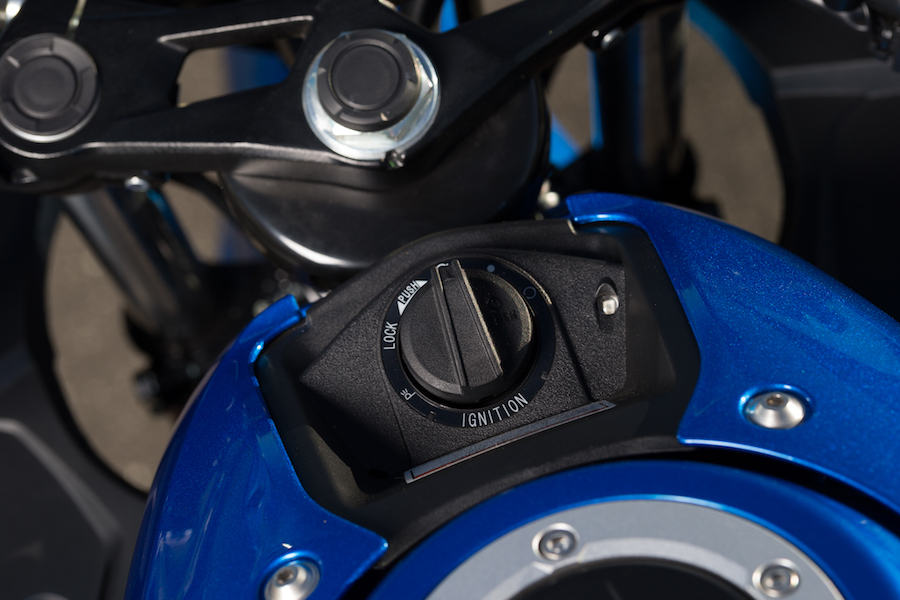 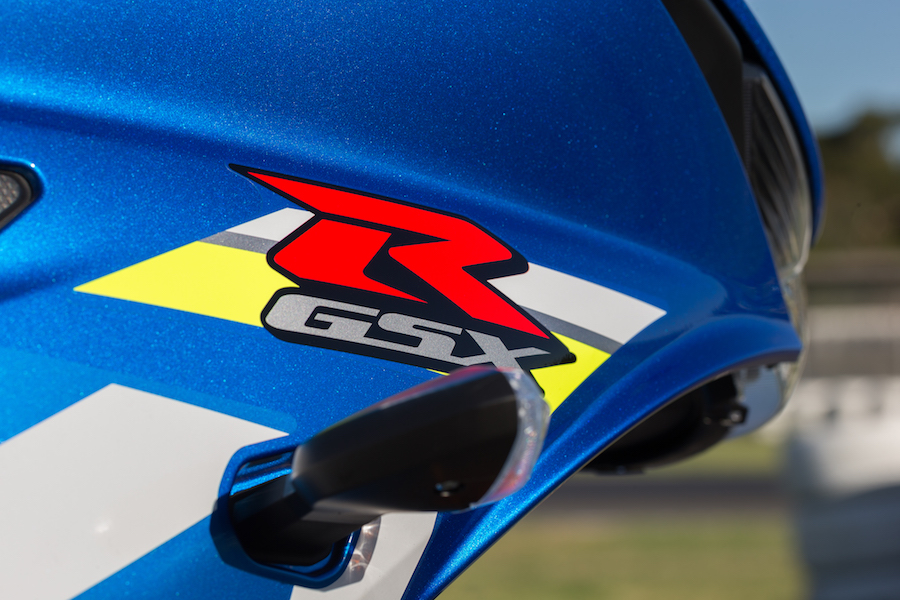 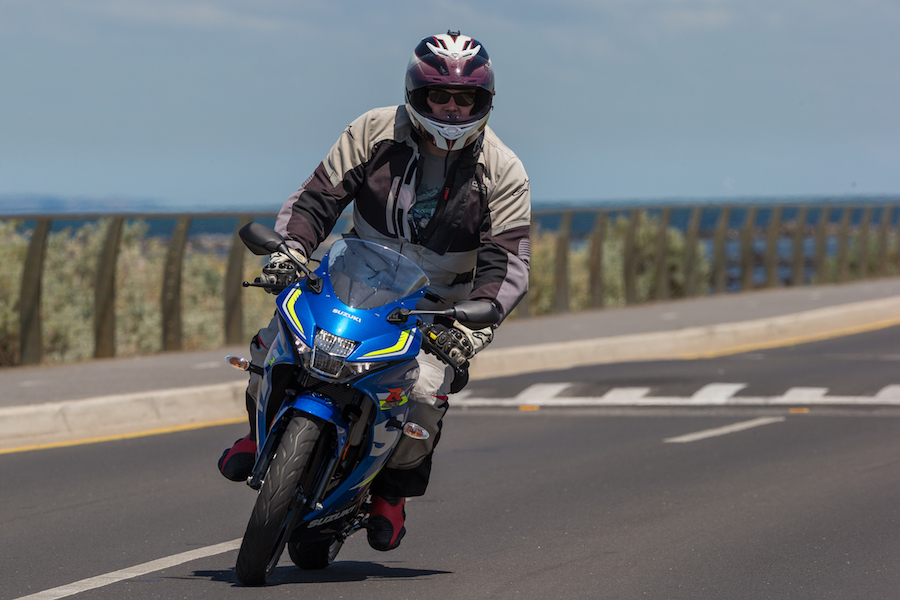 Despite the bike’s overall light weight, it’s supremely stable and keeps its line without being thrown about on unsavoury road surfaces. It cruises nicely on the urban speed limits but a little forward planning is needed if you want to change lanes or overtake.

The ergonomics on the S-model are quite good and, although I envisage these bikes will spend most of their lives as capable commuters, Sunday runs wouldn’t be an issue and I’m sure some nutters will even attempt a trip round Australia on one. Why? Because they can.

The R is small, but even so, my 175cm frame (and others bigger) fitted on to the bike comfortably. The low seat height makes low-speed manoeuvring easy and the weight – well, there’s simply none to manage. A very low 134kg (one kilo less for the S-model) makes it easy to balance, even with a bit of lean, and never once felt like it wanted to fall over at a standstill. Get rolling, and things improve. Some bikes require some speed to stay balanced once moving, not this one. When the GSX-R built up its head of speed, frankly, I was surprised at just how well the 125 reacted on the track. A credit to its chassis, it felt balanced and neutral straight out of the box. If I’m honest, I was expecting some chattering, a lack of feel and no grip but even though it wasn’t anywhere near prepped for the track, it took it in its stride, got on with job and did it bloody well.

Under track conditions, it soon became apparent that the ABS system was more than a value-add sales pitch. The braking itself was progressive and with good feel and, when pushed, the ABS chimed in exactly when needed and not too early (or late!) as with other, lower-quality systems. The brakes worked extremely well for a single front disc and only in severe braking (after 20 non-stop laps) did I experience the slightest amount of fade. And the fact that I even wanted to do that many laps non-stop is a testament to this bike’s unexpected thrill factor, I was having so much fun. Sure, the power is lacking on track, but it was great for cruising around in real-world situations, which is what it’s designed to do.

I wonder how long it will be before a rider-training school snaps up some of these. We also rode the R-model on the road and, to be honest, it was great. I couldn’t really say that it was harder to ride or manoeuvre with the lower bars, it just felt normal and intuitive. I’m not even going to predict which version will sell better; I think in terms of technical advancements the R-model is slightly in front, but they are both great bikes. 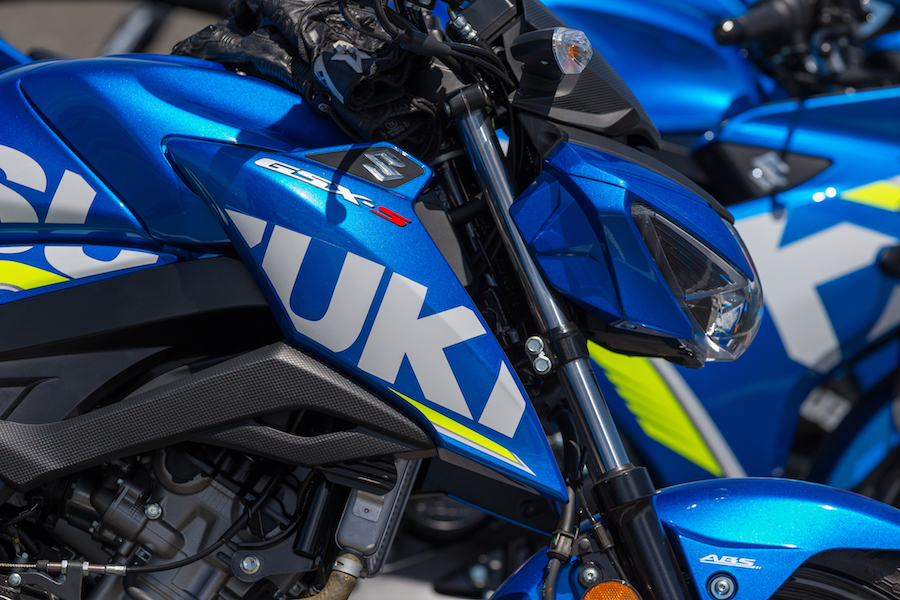 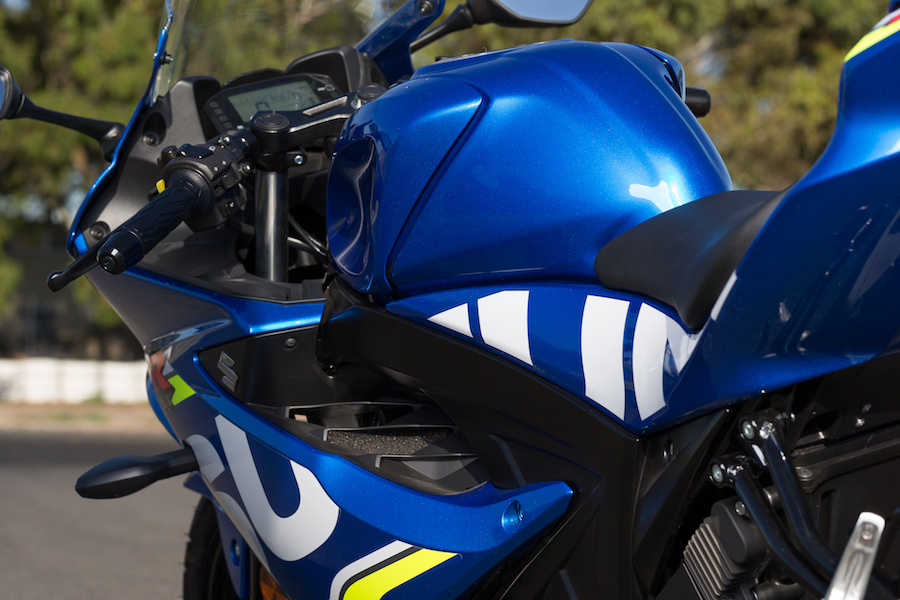 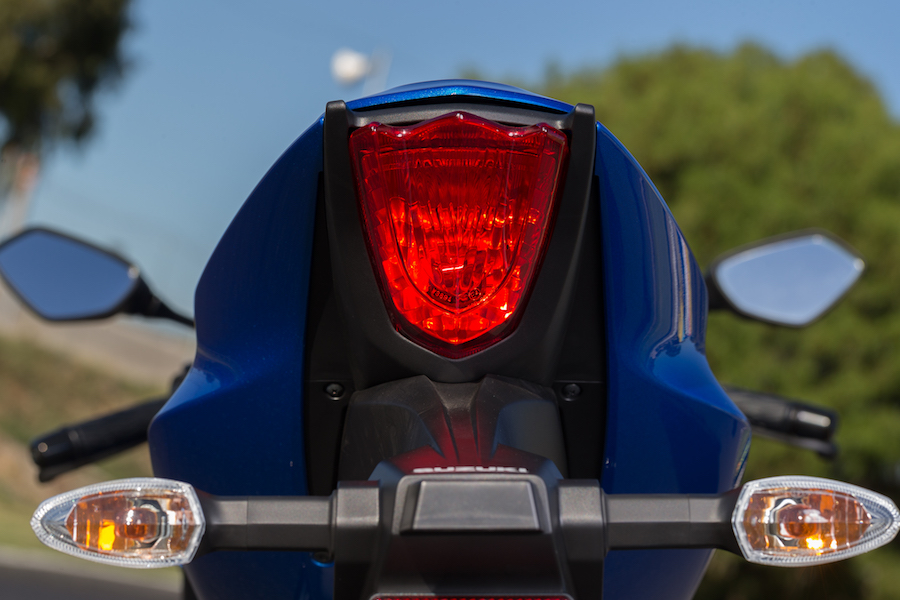 If you want more power you need a 250cc, as Suzuki says this is the most powerful engine in the 125cc category. The standard Dunlop hoops were good enough to get my knees scraping on the track while offering good feeling and plenty of feedback on the road.

Suzuki has identified the potential to hit the 125cc category with a different approach, one showcasing high-quality and unprecedented technology. It’s coming to the market with ABS, an extremely inexpensive price point and some fantastic styling.

Perhaps it’s a sign of things going full circle, and we’re returning to a time when our roads are full of hugely capable 125cc machines.

Time will tell and, if it does, there’ll be plenty of these things among them. 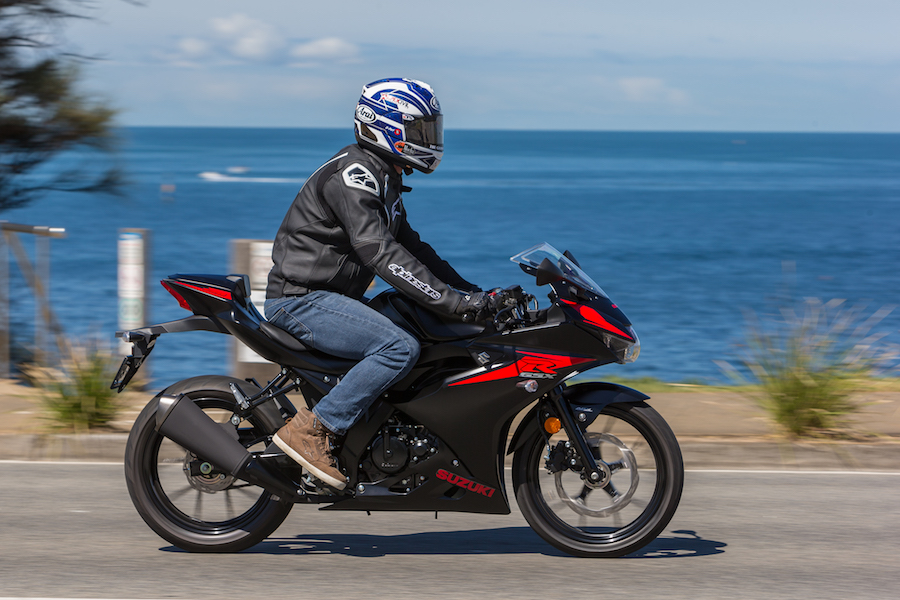 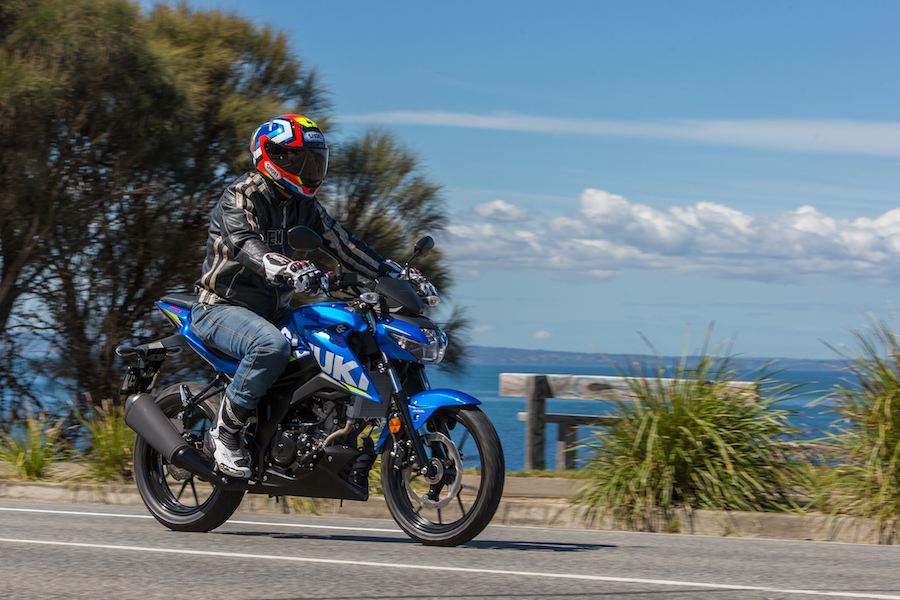 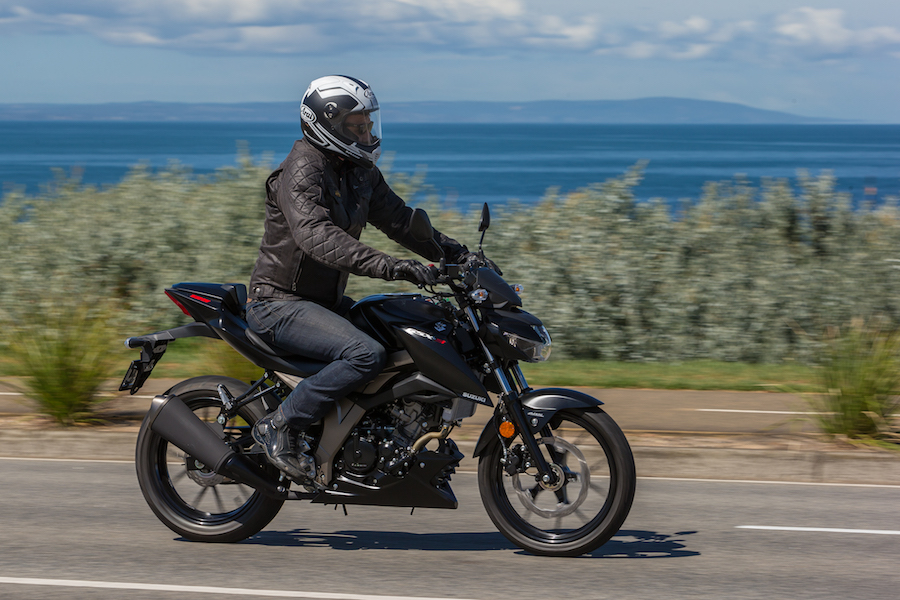