Billed by local press as ‘India’s first Superbike’ on the grounds that it’s the largest-capacity motorcycle to be entirely built in that country, the Carberry Double Barrel V2’s 998cc 55º V-twin engine was actually conceived in Australia 15 years ago.

It is the brainchild of Aussie engineer Paul Carberry, who teamed up with Indian-based businessman Jaspreet Singh Bhatia two years ago to create Dream Engine Manufacturers in order to manufacture the Double Barrel V-twin. It essentially comprises two Royal Enfield 500cc Bullet cylinders and heads on a new crankcase incorporating a stock Enfield five-speed transmission, wrapped in a twin-shock classic-styled frame package.

It comes as no surprise to learn the astute CEO of Royal Enfield, Siddhartha Lal, not only purchased an earlier version of the bike for his engineers to assess, but has kept close tabs on the Carberry operation and has agreed to furnish DEM with the necessary components to construct the Double Barrel engine and frame. It’s hard not to admire 59-year-old Carberry for his persistence in completing the 15-year journey to series production readiness.

“The basic premise was to create a classic British-style 1000cc V-twin using as many stock Royal Enfield parts as possible,” he says.

“My aim is to offer a well-mannered, torquey cruiser with the look, the feel and the sound you’d expect from a bike with a traditional British character; that’s fun to ride, but has enough modern technology to make it reliable, all at an affordable price.”

And that last objective meant building it in India.

Paul called on the services of Melbourne development engineer Ian Drysdale, creator of the Drysdale V8 sportsbikes and a man with a formidable track record of thinking outside the box.

The original 2003 Drysdale-built Carberry-Enfield motor used the cast-iron cylinders and four-speed gearbox of the then-current Bullet single. But in 2007, Royal Enfield introduced the much improved all-aluminium engine with a five-speed transmission, which forms the basis of today’s 998cc Double Barrel V2 dry-sump motor.

Also from the stock Bullet parts bin are steel conrods and cast pistons delivering the same 8.5:1 compression ratio, mounted on a special roller-bearing crankshaft. This is supported by dual main bearings on each side, which Carberry says helps achieve smoothness as well as crank rigidity, with ball bearings on the left-hand side and double heavy-duty rollers on the right.

The high-pressure high-flow oil system features twin modified automotive-sourced pumps, and a spin-on filter. Internal oil lines see the feed to the stock rockers slightly constricted to raise the oil pressure for better lubrication, says Carberry, who also fitted new pushrods matched to specially made plain-bearing rockers and hydraulic lifters, which are accommodated above the standard Royal Enfield cams without modification to the cylinders. 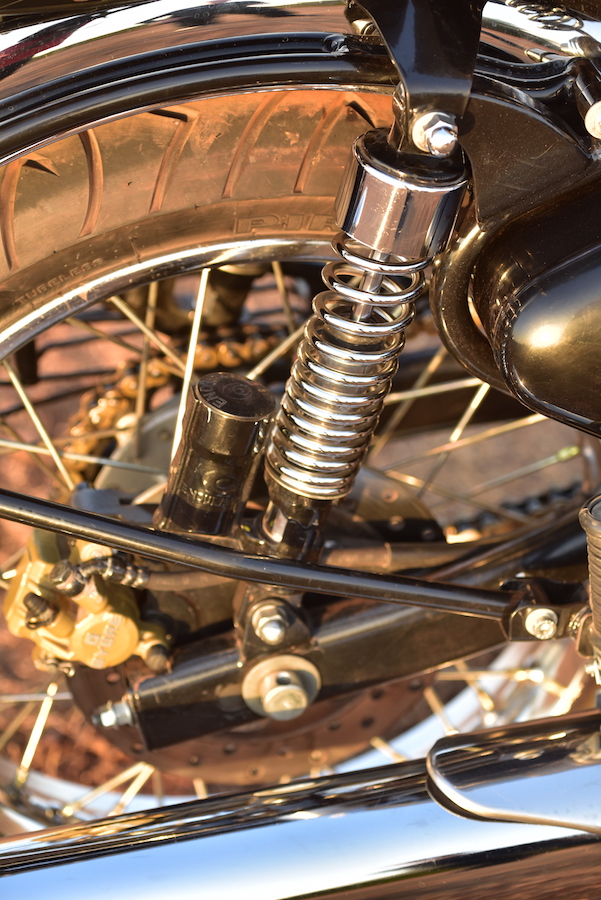 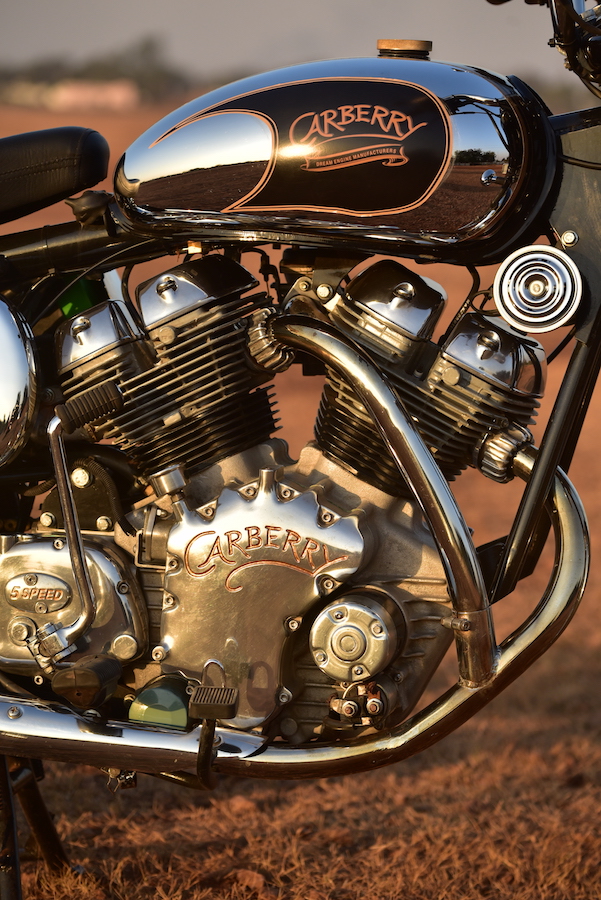 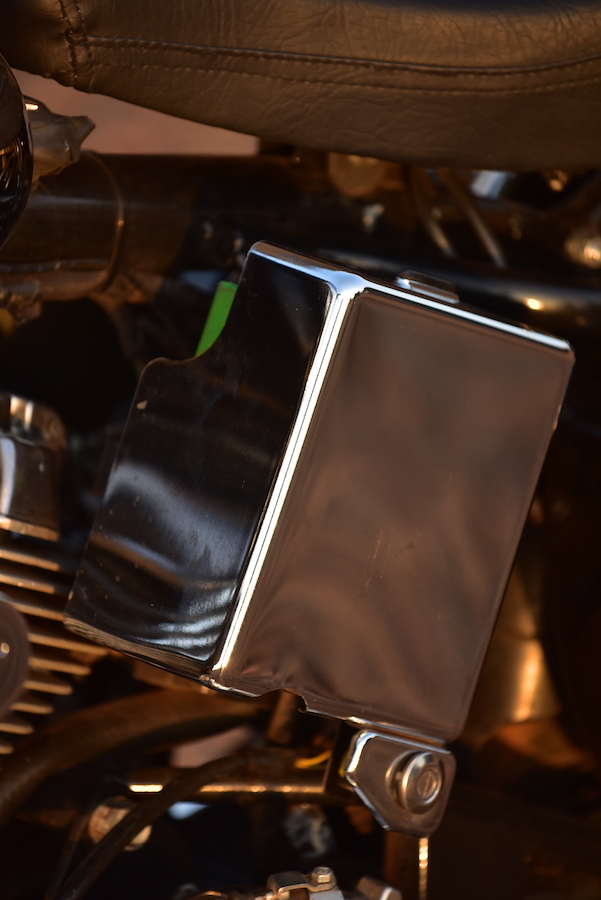 Behind the left-side primary cover lies a duplex chain drive to the separate five-speed Royal Enfield gearbox, matched to a beefed-up Enfield oil-bath clutch, while gearing has been raised by a massive four teeth on the engine sprocket (25T to 29T, so about 12T at the back wheel!) versus a 500 Bullet, to take account of the V-twin’s extra performance.

While the engine is capable of being taken out to 1300cc, the present litre version offers 39.1kW (52.4hp) at 4800rpm delivered to the rear wheel, and 82.6Nm of torque delivered at just 4000rpm ensures a meaty but relaxed response in keeping with the bike’s retro cruiser character.

Carberry has fitted a heavy-duty starter motor as used on a Ford Courier van, so the Double Barrel engine cranks immediately into life before settling to a smooth, offbeat idle; the 2-1 exhaust uses a Bullet single silencer that keeps noise levels down.

The riding position is rational, with the 800mm-tall rider’s section of the two-part seat plush and comfortable.

However, the battery box digs into your upper left thigh, which is not only painful but also means that even a taller rider like me must tiptoe at traffic lights.