Fresh from a second place in the Pipeburn.com Bike of the Year awards, here’s Ohio’s Jesse Basset and his jaw-dropping restomod Trumpet

In recent years, auction houses like Bonhams and Mecum have sold older motorcycles for insane amounts of money, with vintage Brough Superiors, Harleys and board trackers fetching up to and over a million dollars. But an auction can also be a great place to buy a much cheaper custom bike with bargains to be had and rare gems offered up.

It was at one such auction in Las Vegas that Jesse Basset of The GasBox met Kirk, a future client and owner of this incredible 1960 pre-unit Triumph TR6 sprung bobber. Kirk was there to buy; in fact, he was bidding on another of Jesse’s creations, a perfectly timeless Indian. But auctions can be cruel and the excitement can end in sudden disappointment – and that’s just what happened here. Fortunately, while Kirk missed out on the Indian, his meeting with Jesse would soon yield some other delicious spoils.

Having been back home in Colorado for just a month and with the scars of the auction loss healing, Kirk gave The GasBox workshop number a call. He knew what he was after and he wanted Jesse to work his magic and build it: a slick as slate classic Triumph. “The build started out like most, he wanted a rigid bike with lots of shine. But after seeing how nice the rebuilt engine and transmission looked polished and assembled, he asked if we could make it look like a Vincent,” explains Jesse about the unorthodox design process. The TR6 Trophy was produced in Triumph’s Meriden factory from 1956 to 1973 and was originally named the TR6 ‘Trophy-bird’, seemingly to allow it to bask in the reflected limelight of the company’s successful Thunderbird model. The Trophy used the same basic donk as the T110, but with the spiffy new ‘Delta’ alloy cylinder head. The cast-iron barrel was also retained, but painted silver. The engine developed 42 broken ponies.

The Trophy was quite a successful model for the company, particularly in the US where its competition ‘desert sled’ variation won numerous competitions throughout the late 1950s and 1960s. Its legendary appearance in the movie The Great Escape and Steve McQueen’s general keenness for the bike have become the stuff of legend.

Production finally finished in 1973, when the Trophy was replaced by the five-speed 750cc Triumph Tiger TR7V. It all starts with the smooth lines of the original 1960 Triumph frame and swingarm. Both have been prepared to perfection, rid of any blemishes and coated in the classic black chassis paint of the time. To get the period look and some Vincent character, the Triumph’s telescopic forks were ditched for a BSA girder arrangement.

“The girder had to be modified slightly, so we fabricated new links, a new damper, and custom brake stay for the Triumph full-width hub. The front hub is an early full-width piece, but we wanted to run the later dual leading-shoe plate, so we machined off the outer perimeter of the brake plate and modified the spacing.”

The gas tank might look like a totally stock item but Jesse has plenty of tricks up his sleeve. With the Vincent storing its oil in the frame the design called for no visual oil tank. “We wanted the look of a large fuel tank,” they remarked. So to get the best of both the tank was fabricated so that the left side stores the fuel and the right side the oil. This is achieved while still maintaining the Triumph’s internal plumbing arrangement. 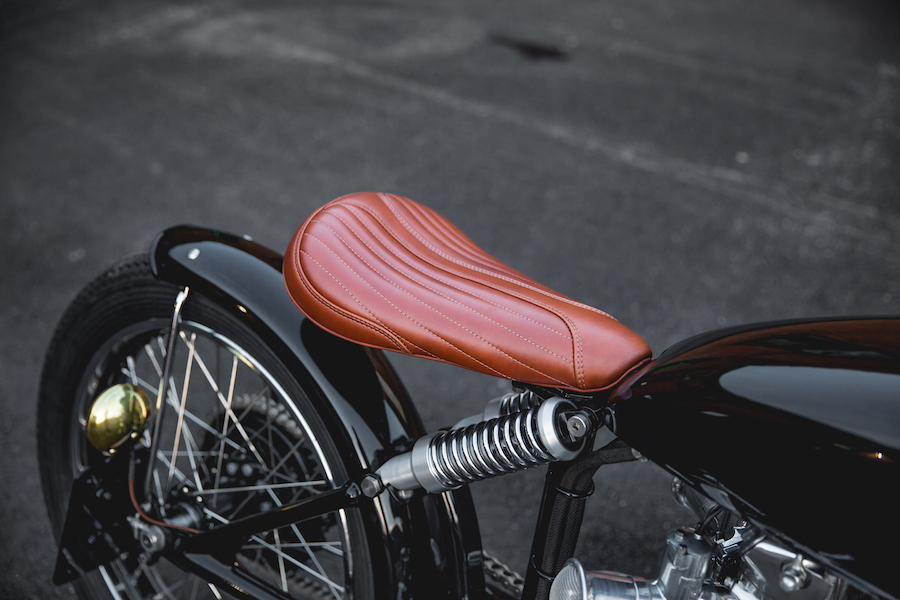 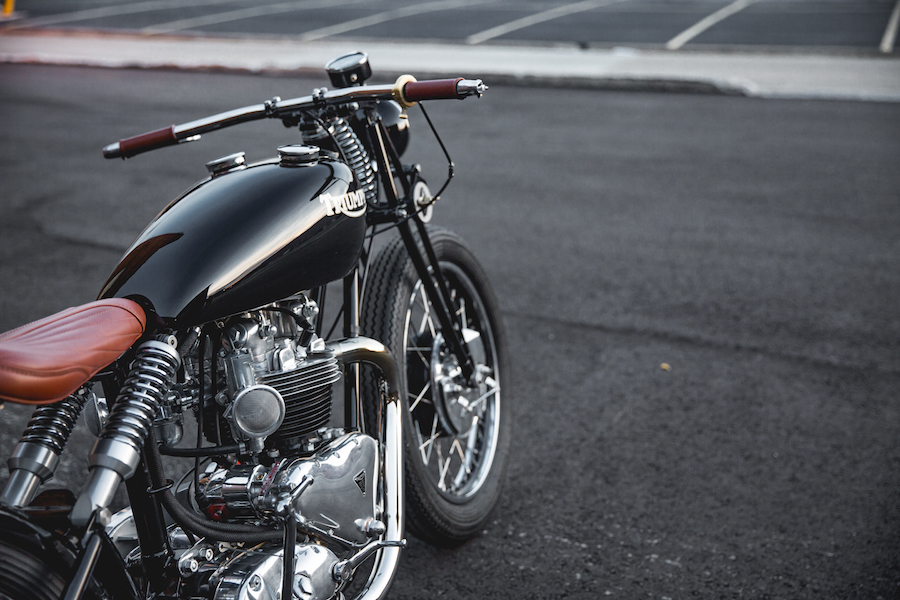 Unsurprisingly, it was the rear end that would require the most work in the transformation of a simple Triumph into a vintage masterpiece. They knew the look they were after but there was simply no room for standard springs. Not wanting to stretch the swingarm or distort the dimensions a unique setup was conceived. “I started by purchasing two Vincent shocks – these are just the shocks without springs,” says Jesse.

“I then machined down the bodies and added threads to make them adjustable, and installed a new Harley springer spring. The lower caps can be tightened or loosened depending on the person’s weight. This gave the coil-over look we wanted and fit within the small space we had.” The result is a superior version of the original Vincent Black Shadow-style setup that has attracted loyal fans for generations. Hot on the heels of this minor miracle, Jesse tells us that he almost finished a ’68 Royal Star BSA that could almost be considered a stablemate of this here Triumph. While it seems that the bike will definitely be more on the ‘resto’ side of the restomod spectrum, it will have many and various pieces sourced from other BSA models, including the Firebird and Hornet. And with the customer being an antique Porsche freak, the bike will be finished in a ‘Turkish Red’ paint job from the official 356 colour chart. We can’t wait.