As I leapt aboard the Honda CFR250 Rally and turned the key, I was cheering inside my helmet. Of all the adventure bikes on our ride, this was surely the best one for a dirt novice like me to enjoy our farmstay. The knobby tyres, oodles of suspension travel and ground clearance, relatively light weight and even switchable ABS had me convinced I would enjoy my initiation into the ways of the dirt.

Of course, first we had to get to Stump Hill – a two-hour ride on mostly straight country highways. This was the trade-off. And yet, first impressions were that the CRF would be perfectly adequate as a commuter. The power was modest but punchy enough to scoot into gaps or out of trouble, and those large, easily adjustable mirrors … it’s a minor thing but god it makes a big difference in traffic. Out on the highway, while others were enjoying their cruise control and heated grips, I wasn’t feeling at a disadvantage. True, overtaking required a bit of planning, and after a while the backpack I was carrying (no panniers or topbox on this bike) started to weigh more heavily. And okay, with knobby tyres, you won’t be getting your knee down, but for me (and most LAMS riders) this is a non-issue. The core question was whether you could ride the CRF to your destination rather than carrying it in a trailer or van, and the answer was ‘hell yes’.

Especially when you’ve got a property like Stump Hill to look forward to. I can honestly say, this is the most fun I’ve ever had riding a bike. There were some hairy moments, sure, and the bike did hit the deck a couple of times, but they were what I would call very acceptable falls. The CRF gave me the licence to try things that I never would have on the road, or on a heavier bike – and that was the point of this off-road exercise for me. I felt like the gearing and the idle speed were perfect for the conditions. Even at really low speeds, the engine purred rather than putted, and I never felt close to stalling. And when it came time to speed up, a long first gear gave me plenty of room to rev. It took me across slimy clay logging trails, wet grassy slopes, boulder-strewn paths, and even – with expert guidance from Steve Martin – up and down the sides of Bald Hill. Truly, the bike made me feel like no part of the farm was off limits. And when Stump Hill Dick took us for a tour of some of the local trails, I saw a different dimension of adventure riding; thanks to the extensive network of dirt roads in Australia, you could conceivably travel for days without touching the tarmac. Once again, the overwhelming feeling I came away with was
one of freedom.

Like most riders, I often daydream about my ideal bike. And until now it had always been a modern nakedbike. But since our trip, I’ve also started seeing a dual-sport with knobbies in my mind’s eye. Looks like I caught the adventure bug. The unintimidating nature of the CRF. While I admire the experts on the ride who can do incredible things on the big-bore adventure bikes, I was so thankful for the Honda’s measured power delivery. And thanks to its light weight – just 157.65kg when fully fuelled – I easily saved a few near falls.

Not so keen on

The only difficulty I had was the reach to the ‘bars when standing up on the ‘pegs, but it’s probably more to do with my body shape than the bike. It’s also worth noting the limited range – with a 10.1L tank, the CRF was the only bike on the ride that needed an early fuel stop.

If I were going to use the CRF as a commuter, I’d invest in a comfier seat or maybe go the fleece cover. Luggage would also be on my list – ideally a big topbox. And I’m not sure if it was the bacon and egg sarnies, but one of the other riders suggested I could do with slightly stiffer rear suspension. 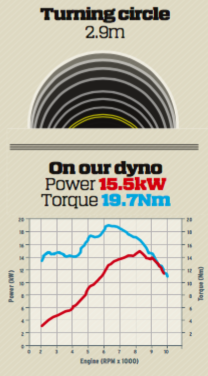