Version 2.0 of Yamaha’s super-roadtard is here, and it’s a Frankenstein fusion of back-shed ballsiness, top-shelf tech and market-leading value

Do you remember when riding ‘bitza’ bikes with superbike mills, cut-back subframes, brightly painted wheels and a tiny supermotard front cowl was all the rage? It was probably around the same time you were glued to your TV at 6am each morning watching Cheetah demonstrate perfect form in Australia’s very own version of Baywatch – Aerobics Oz Style.
Or maybe that was just me.

This was the era of hardcore underground streetfighter custom builds, and it spawned a generation of equally hardcore sportsbike loons who were looking for something edgy in a market dominated by clean-cut boy racers with all the gear and no idea. In fact, many of the streetfighter donor bikes were insurance write-offs: insanely powerful in-line four-cylinder production superbikes that had been thrown up the road by owners in the pursuit of happiness.

Well, the underground streetfighter movement has all since petered out, mostly because of laws that stop us returning these bikes to the road in various states of disrepair, and the general finger wagging that seems to run unchecked in modern society. These days we live in the era of the big-bore supernakeds. But it appears Yamaha is seeking to reinvigorate the once popular streetfighter genre with a ready-to-rock range of hoon-mobiles that beg you to push the envelope.

The Japanese manufacturer continues to fight the good fight with its Monster Torque range and I’m pleased to say the MT-09 lives up to the moniker. In addition to the learner rider’s wet dream that is the MT-07 LAMS, there’s also an unrestricted parallel-twin MT-07 High Output, which provides an excellent stepping stone in the MT family. In the past though, the rather plain Jane looks of the outgoing MT-09 flew in the face of the family’s ‘Big Daddy’ – the MT-10 – which is all brawn and brute with none of the restrictions or table manners of its offspring.

With the new MT-09, Yamaha has created a unique and formidable second-in-command. Rather than following on from the more reserved parallel-twin underlings, it has gone straight for the jugular with more capable suspension and aggressive looks to complement what was – and still is – one of the best engines on the market. The in-line three-cylinder mill is about as close to raw, unbridled performance as you can find these days, and despite the inclusion of ride-by-wire technology, it still feels like the throttle cables run directly from the tendons of your right hand to the instant and adrenaline-pumping power that erupts from this wild motor in every increment of the rev range. 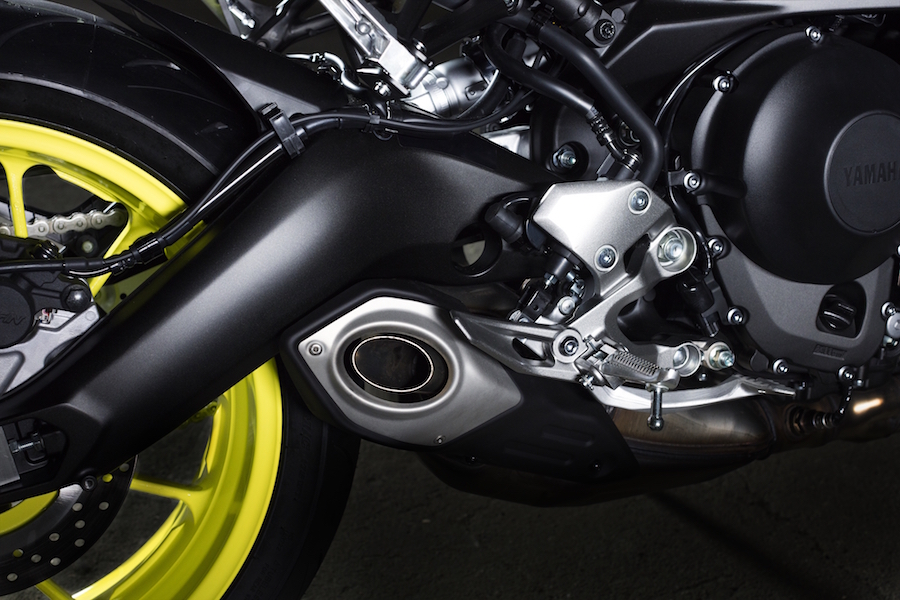 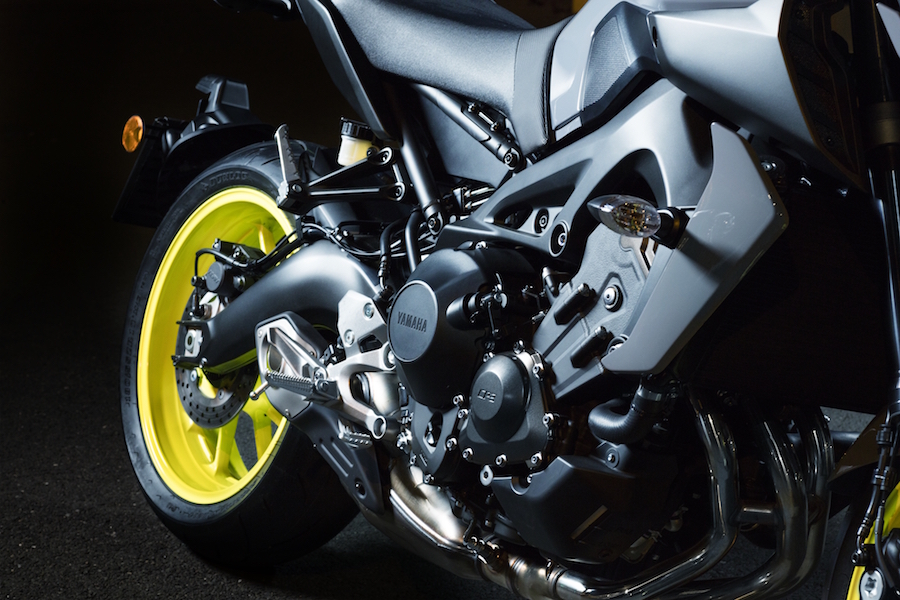 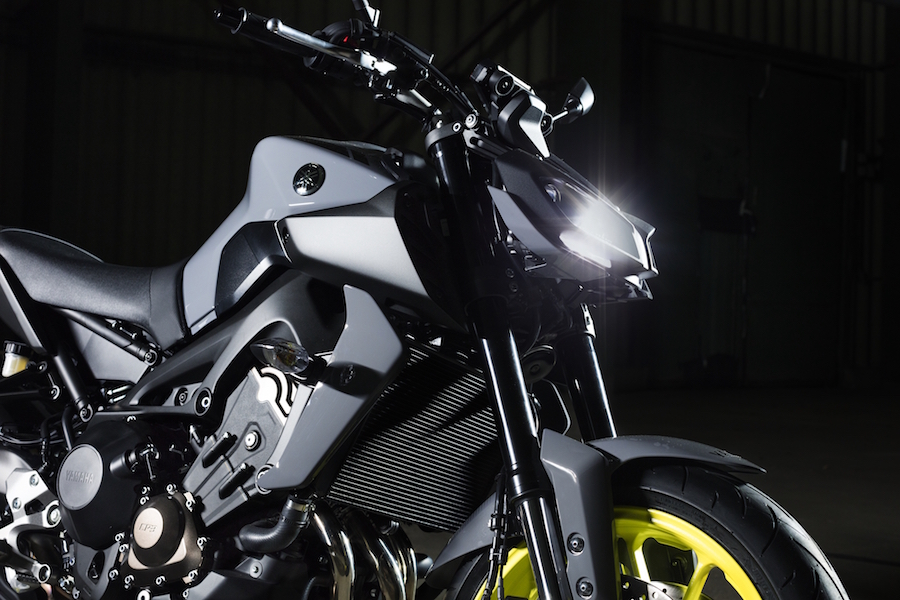 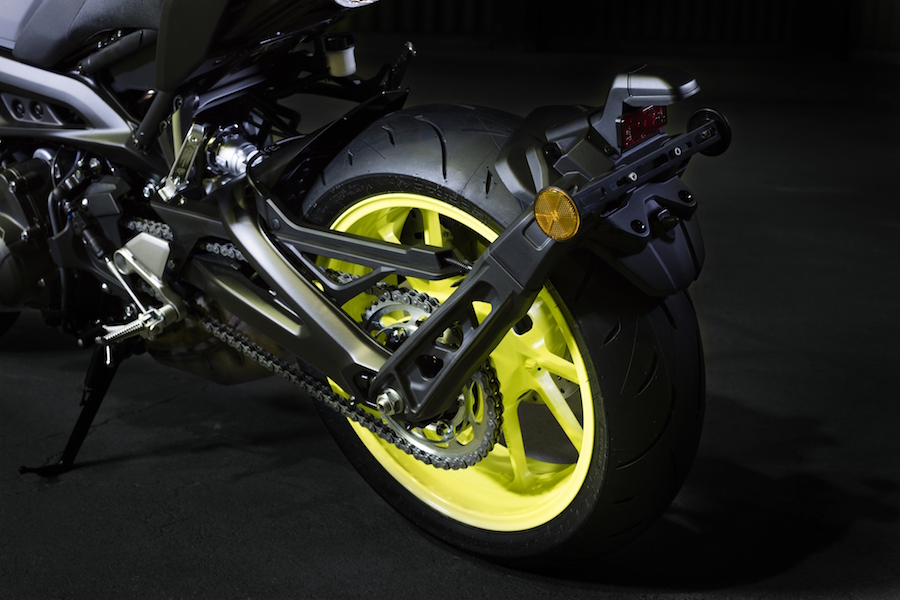 In addition to the front-end styling changes on this year’s model that include twin LED eyes up front and indicators relocated alongside the radiator, the subframe is more upswept and has been cut back by 30mm. The new 3D tailight displays the letter ‘M’ when lit up in what appears to be a not so subtle rip at Kawasaki’s signature ‘Z’ range, which also employs this gimmick. The seat height is jacked up by 5mm to 820mm, and there’s a flatter profile than before which makes it easier to shift your weight around, or brace the tank with your knees, while you’re hanging on to the flat ’bars for dear life as you wind on the power or jump on the anchors.

Call me old-fashioned, but there is something cool and unmistakably bad-ass about the gaudy sportsbike rims on the Night Fluro colour scheme. They’re a throwback to the good ol’ days when it was common to lift a pair of lighter rims from some smashed sportsbike’s carcass, and fit them to your Frankenstein build without prettying them up – all with the aim of creating a lightweight bike with stripped-back styling that packed a massively powerful engine. Looking rough around the edges and handling like a cat with a firecracker strapped to its tail simply added to the appeal. If Yamaha was seeking to bring those elements of hardcore street hooliganism back to the masses, it has succeeded with the re-energised next-gen MT-09. 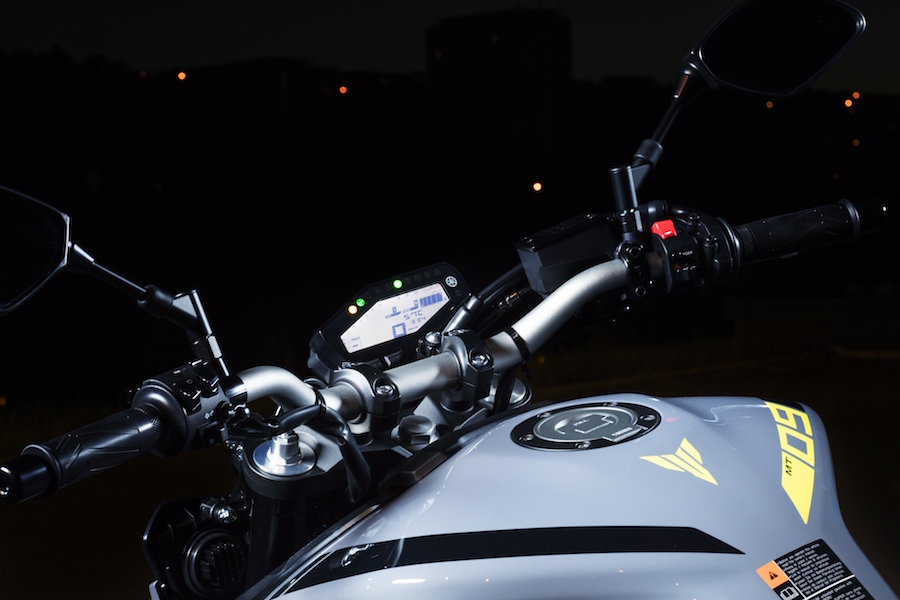 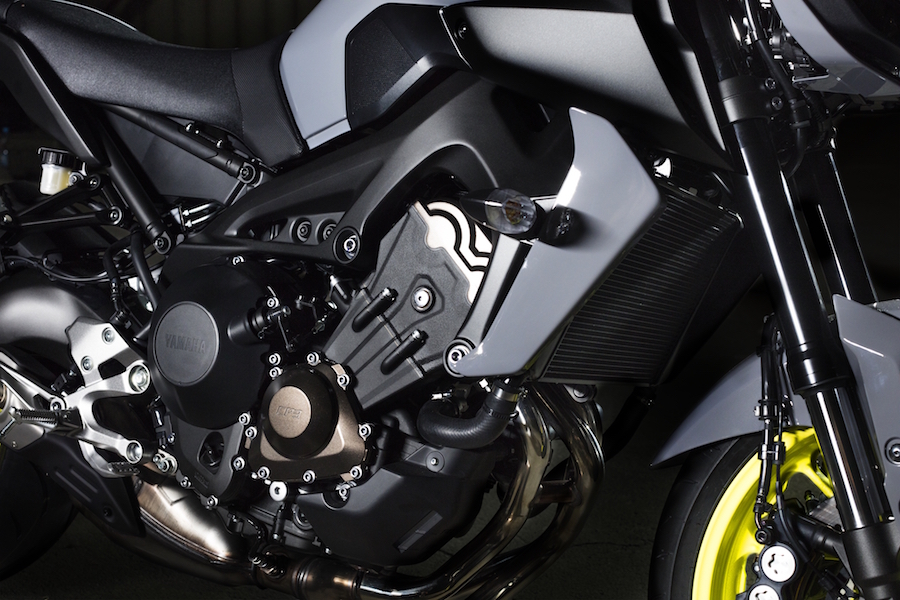 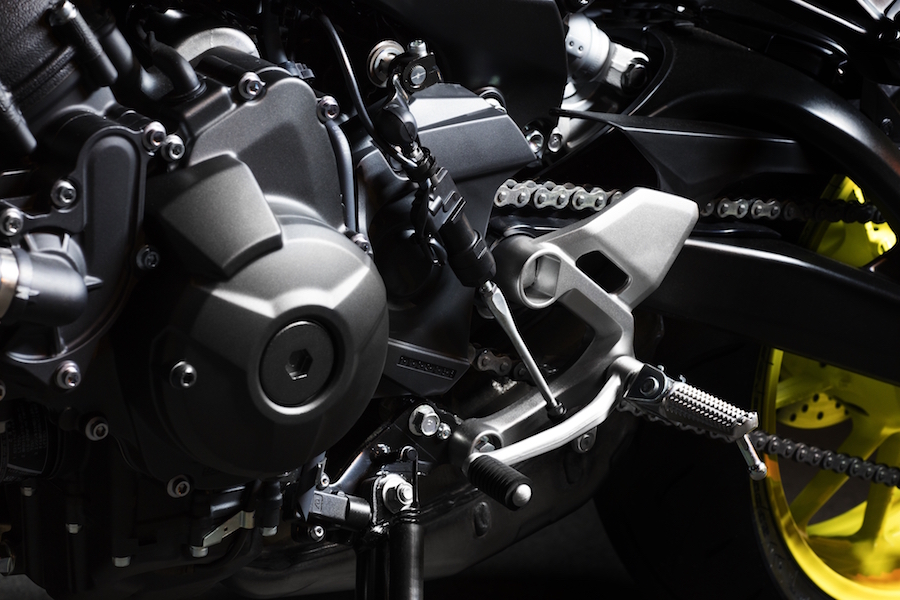 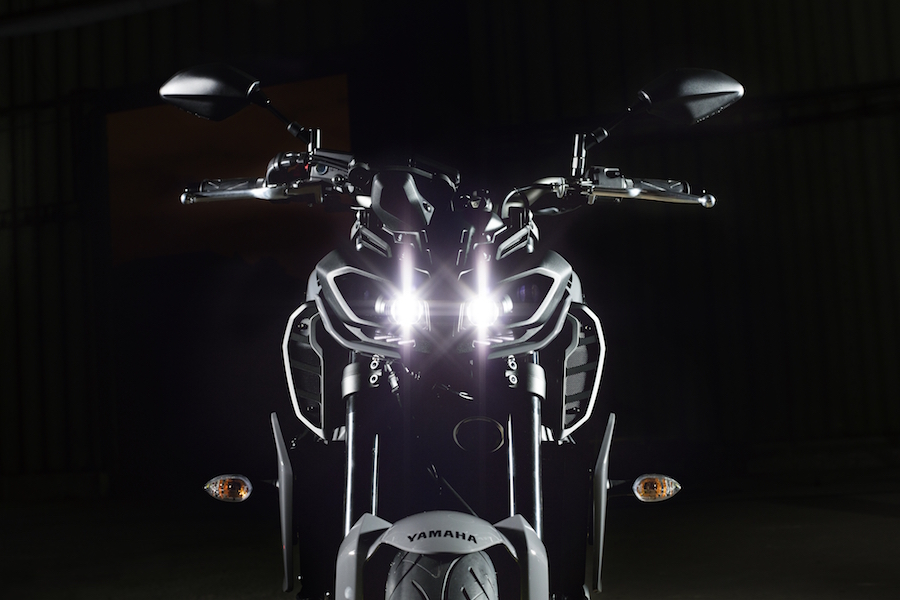 The powerplant is the very same 847cc lump with a 120º crossplane crank that graced the outgoing model, and the XSR900. With a claimed 87.5Nm of twisting force on tap at 8500rpm, and the kind of X-factor kicks that we all crave, this engine will go down as one of the most rambunctious mills of our time. The power comes on smoothly but severely thanks to the evenly spaced firing order (0, 240º, 480º) surging all the way to peak power output of 84.6kW at 10,000rpm, and the ride-by-wire throttle offers three switchable engine maps in the ECU. ‘A’ mode is a bit rough due to its snatchy power delivery making ‘Standard’ the go to mode for virtually all dry-weather riding.

The sheer diversity of the MT range is something the bLU cRU can be very proud of. Rather than go down the route of minimising production costs and simply scaling up the range in capacity, they continually build the challenge, and therefore the excitement, for riders taking that next step in their experience. And what a step it is! From the MT-07, the MT-09 engine represents a massive jump in terms of performance and downright wrist-wrenching, seat-of-the-pants exhilaration. Yamaha hasn’t dropped the ball with the stopping package either. The twin 298mm floating discs up front are clamped by four-pot unbranded radial-mount calipers that will put the beast on its nose with a firm two-finger pull.

Likewise, the two-pot unit on the rear is great for settling the bike’s slightly soft rear shock when you’re trying to hold a tight line in dubious street or track conditions. Unfortunately, the ABS is non-switchable. A downside in my opinion, particularly for anyone aspiring to tame the MT-09 by taking to the track and riding it at the limit. This is especially so when you consider the suspension has seen some substantial improvements, including the addition of a fully adjustable 41mm Kayaba fork up front, and rebound adjustment at the rear. There’s also the new assist and slipper clutch, which Yamaha claims delivers a 20 per cent lighter clutch pull and helps to keep things in line when you’re banging down the gears on track and fighting the unsettling effects of back torque in first gear.

The MT-09’s new streetwise chassis has been built to cope with the generous powerplant and severe restyling. It looks like a slightly unhinged ride with the ultra-compact front cowl, downward-slanting twin LED eyes, and stubby upswept tail section. The truth is that the extremely steep rake and short wheelbase do make for a pretty loose ride when you’re blasting through the hills on anything but billiard table smooth surfaces. But therein lies the trade-off of a bike that smashes through an urban environment with such flickability and finesse. You can’t have it both ways, or at least you can’t in stock trim. Still, at $12,399 (+ORC) it offers 12-gauge bang on a slingshot budget, and in my opinion there are few, if any, bikes on the market with cartridge-style forks – including those designed for track use – that couldn’t do with some sort of revalving of their suspension to get the most out of them.

And, in case there was any doubt on how well priced this particularly breaking bad motorcycle is, Yamaha has reinforced its market dominance by installing a quickshifter for clutchless upshifting of the already ultra-slick six-speed gearbox. We tested the unit over the course of two days, and it presented as a faultless piece
of kit that complemented the rapid pace on both road and track. This latest model will set you back a bag of sand more than last year’s model, but having ridden both the previous standard MT-09 as well as the cafe racer XSR900 version of last year with its drop style Ace ’bars, I could argue that these upgrades are well worth the premium. Dressing the MT-09 up in retro styling just doesn’t tell the story well enough, and while everyone loves a sleeper that allows you to protest your innocence when Mr. Plod comes knocking, it’s also nice to have a bike in the shed that rocks harder than the Sex Pistols every day of the week.

Of course, no motorcycle is without its shortfalls, and the finish could do with a bit of tidying up to do the engineering justice. The radiator side covers and front winglets are nice touches that serve a purpose, but the industrial-looking rear fender that attaches to the swingarm is a little naff, ditto the ‘muffler’ which is really no more than a thin cover that sits over the pipe extending from the cat box. Luckily, Yamaha is setting itself apart with a formidable selection of factory-approved bolt-on accessories ranging from genuine Akrapovič full systems to riser bars and GPS holders. There are over 60 items to choose from, and you can kit it out virtually using Yamaha’s online app, My Garage, to see what your ride will look like before taking the plunge. So, if you’re at that stage where you want to step up to a middleweight nakedbike that will allow you to happily scratch through the hills or terrorise the neighbourhood, the MT-09 could be just what you’re looking for. And the bonus is that you’ll be the proud owner of a donk that belongs squarely in the Hall of Fame for the terrifically insane, all 847cc of it crammed into a chassis that is more super-roadtard than motard.

And just like the leotard-clad Cheetah in the early naughties, this motorcycle is likely to win friends and influence people not only because of what’s underneath its scantily clad exterior, but because of that X-factor that resides within and all around it. The MT-09 has tapped into an elixir of excitement and frivolity which is hard to quantify until you’ve tasted it, and impossible to ignore once you’ve experienced it.