Building a Giacomo Agostini tribute bike? Then you better do it right. And it doesn’t get much more right than this angry MV from Deus Ex Machina

The rule of threes, or “omne trium perfectum” in Latin, supposes that everything that comes in threes is perfect. You’ll have to be your own judge as to whether it’s an old wives tale or a rule to bank on.

But when it comes to this devilishly delicious, race-inspired MV Agusta Brutale RR – also known as the ‘AgoTT’ – the threes just keep piling up. Built at The Deus Emporium of Postmodern Activities in Venice, California by design director Michael “Woolie” Woolaway, the build was commissioned by MV Agusta as a homage to the marque’s rich racing heritage to really capture the spirit of Tourist Trophy racing of the 60s and 70s.

Considered one of the greatest motorcycle racers of all time, Giacomo Agostini won 13 world grand prix  championships and 10 Isle Of Man TTs between 1966 and 1973 astride the MV Agusta marque. So from a man who’s built bikes for Orlando Bloom, Bruce Springsteen and Billy Joel comes a rare and beautiful design in honour of the man known simply as Ago.

And as you can see, the number three represents more than just the triple cylinder engine that powers this red-hot ride. Much more.

From its foundation in Sydney 11 years ago, the motorcycle, surf and clothing brand Deus Ex Machina has expanded not only globally, but also exponentially.

And from their Venice location, Woolie brings a distinctive old-school ‘Cali’ style to their builds.

Growing up in Marin County in the Frisco Bay area, he was surrounded by cars and bikes from a young age – something that probably explains why he was capable of rebuilding a Briggs & Stratton engine at just nine years old.

Heralding a new, more sensible and sales-focused attitude by the company, the recent Brutale 800 models (right) have shown us that the Italians can indeed make bikes that work properly, play nice and still ooze their trademarked ‘passione’. And while it appears that the MV engineers have yet to discover the virtues of not placing peak power and torque at a gazillion RPM, at least the newer versions of the bike have shifted the fun down and into the affordable sub $20K zone.

Scratch its perfectly tanned Mediterranean skin and you’ll find a counter-rotating, liquid-cooled triple that’s really rather peachy. And with a 13.3:1 compression ratio providing 140bhp and 86 Nm of spins, it’s not hard to see why. Naturally, there’s a tube trellis frame holding all the heavy bits together and the bouncing and skidding are handled by Marzocchi and Brembo respectively. By all accounts it’s a fun, sharp bike that definitely sits more comfortably on the track-focused side of the street. The front tubular trellis frame remains in place, but the subframe is gone and a totally new item fabricated in-house from quality chrome moly forms the bespoke rear support.

Much of the electronic hardware is affixed to this new subframe, but its primary role is supporting the wicked tail section. A modern interpretation of the old design, the tail unit is like the proverbial Devil’s Head, hand-crafted from aluminium with flowing lines to put the fear of Deus into all who would challenge her.

To recreate the look of the stunning exhausts fitted to the original MV Agusta 350-4 race bikes, Woolie sourced 27-inch megaphones from Cone Engineering and SPD tubing. Then in his small workshop he hand-built a new exhaust system so beautiful it is in itself a piece of art worthy of a museum display.

When it comes to shocks, only the best would do for Woolie, and we all know what that means. Öhlins. Its USA arm hand-built a completely custom shock especially for Ago TT. Yes, you did read that right.

And while you’d think that the factory Brembo brakes on board would do just fine, Woolie has a thing for the brilliant products from French firm Beringer, and its full brake package is fitted front and back. To truly capture the MV feel of the classic TT era, it was always going to be the tank that would provide the most challenges, and be the vital component of the build. And for a man who once skipped class to hang out in the metal shop, Woolie was born for the task of replicating the work of MV tinsmith Primo Selotti.  “Selotti was from the airplane industry and was revolutionary in his gas tank shapes that not only looked great, but were super aerodynamic with ergonomics to fit the rider. They were only ever meant to go fast.” Shaped from seven individual pieces of aluminium and with all the challenges of contouring to a modern frame and creating the negative curves, this is without
a doubt the hardest tank Deus has ever built. Difficult, yes, but who could complain when you have a result like this? 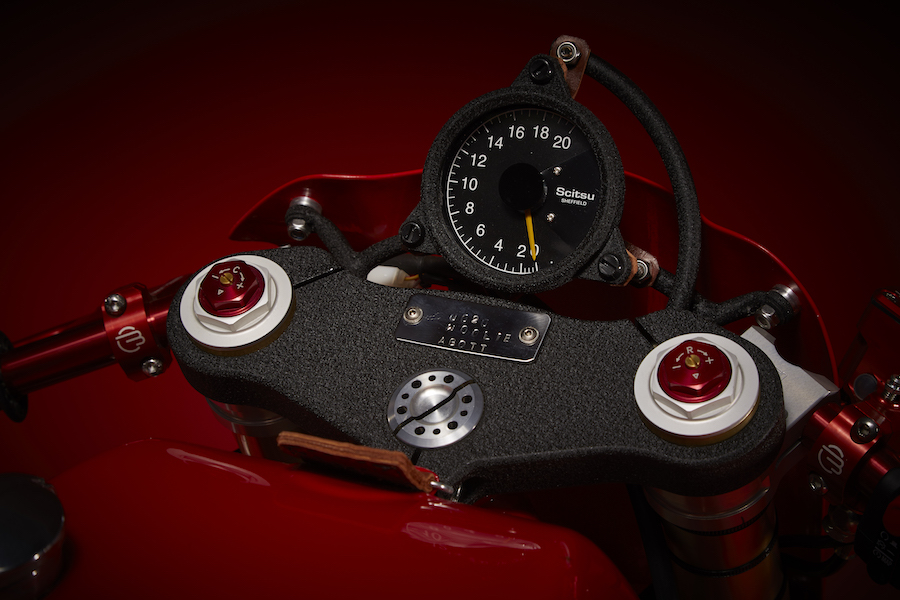 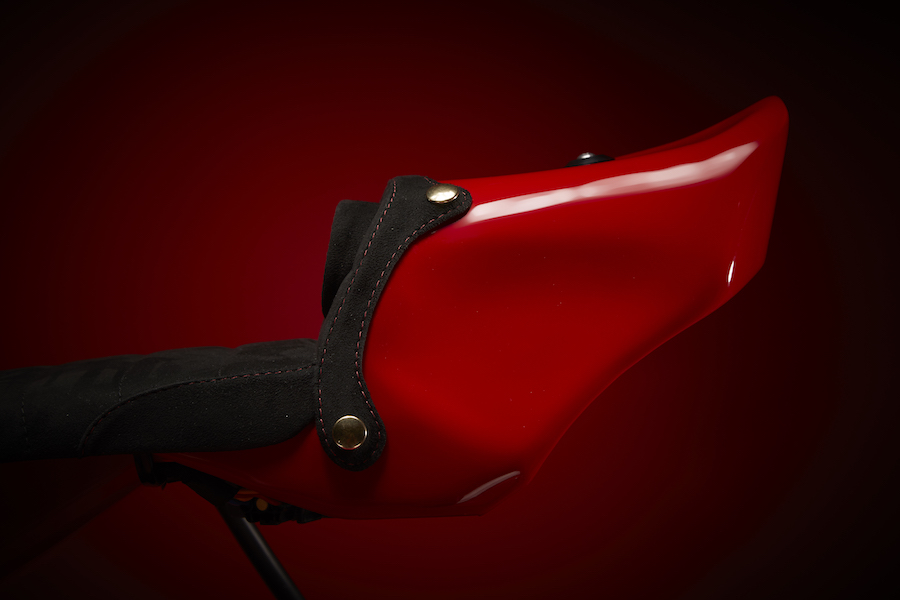 Calling Woolie ‘prolific’ would be like calling Donald Trump ‘a little bit sexist.’ At any one time, he’s likely to have upwards of ten projects on the go in his Venice Beach workshop. Avid followers of his Instagram account will tell you that he currently has a Harley-Davidson 1200 Framer, Triumph T140, and a Ducati 750 Sport on the go. Deus creator Dare Jennings’ credo for design, however, is not to overdo retro. “You’ve got to be very careful of nostalgia because nostalgia is a dead idea,” he says.