We go to Thailand, the Land of Smiles, to visit Ducati’s Land of Joy as it reveals two key models in its 2019 803cc V-twin Scrambler range

Thunder cracks overhead and the lightning stabs at the steamy landscape. As I head up a greasy dirt road along a gloomy river valley the fight goes out of me. It’s the fag end of a long day of riding in strength-sapping tropical heat. A little voice in my head tells me now is not the time to go full-tit up an unfamiliar road in an unfamiliar country. I ease back and a little piece of magic happens on Ducati’s 2019 Scrambler Desert Sled. I have time to take in the view while the bike does the hard work for me.

A valley panorama opens out with small cropping farms running down to the water. Hut-like houses with leaf roofs are set among groves of wild banana trees on the outskirts of a rubber plantation. All this lies before a backdrop of mysterious mist-covered mountains.

This is what Ducati’s Scrambler Desert Sled is all about. Strap a sleeping bag and tent to the pillion seat and fill a tank bag with vital essentials for a couple of nights away. Then head for the hills. But it has taken me a while to come to terms with the Desert Sled. Riding the softer-focused Icon model has been a no-brainer, but initially I struggled with the Sled. Now it’s all fallen into place and even the threat of an imminent torrential downpour isn’t an issue. It will add to the experience of being in the moment.

Ducati’s launch hosts were quick to emphasis two key points about the 2019 Scrambler sub-brand: refinement of the motorcycle and its ergonomics plus a rationalisation of the range that now includes an increased catalogue of custom accessories, along with a larger range of clothing and lifestyle items. All the changes are based on customer feedback of a model that has been around since 2014 with more than 70,000 units sold worldwide.

Gone is the long and convoluted list of variants, replaced by four basic models. My description of these is that the Icon is road focused, the Desert Sled a soft off-roader, the Full Throttle a flat-track-inspired fun machine and the Café Racer a mix of a lot of racetrack styles from various decades. Buyers are now encouraged to create their own variants from the new accessory catalogue and makes more sense, both the to seller and the buyer. Customer feedback has resulted in a careful revision of styling and practicality, but you have to look closely to notice. For example, the Icon has a reshaped petrol tank that has interchangeable aluminium panels. Its seat has been lowered slightly and incorporates more comfortable padding and elegant grey edging. The LED headlight is an obvious change but not the instrumentation.

What has always looked like a traditional analogue speedo from last century is now crammed with information. A gear-select indicator and a fuel gauge among the major upgrades but that joins everything from an ambient air temperature read-out, two trip metres and odo through to over-rev warning lights. It is also compatible with Ducati’s Multimedia System, you just need to buy the relevant accessory Bluetooth module to answer incoming phone calls, send and receive texts, listen to music or talk to your pillion.

Perhaps the biggest visual change to the entire model is the black powder-coated engine. Combined with beefier side panels and compact exhaust system, all the Scramblers look more purposeful. The launch presenters explained that the changes reflect the original process that had created the first Scramblers in 2014. A group of mainly young designers holed up in a  studio to invent ‘the right bike at the right time.’

“It’s like a T-shirt versus a suit and tie,” said one of the presenters. So an honest bike, not a show pony. Let’s find out.

As I suited up for the ride I asked myself how the hell we were going to properlypeople on the coast of Thailand. The answer came in the form of a policeman riding a Ducati Hypermotard. He cleared a way through the traffic and led us into the hills of Phuket Province, 90 minutes south of the capital. Bringing up the rear was an ambulance. What could possibly go wrong?

The policeman quickly set a brisk pace, had a well-trained eye on every potential danger and dealt with it on the fly. He even pointed at an errant dog lurching across the road and it quickly slunk off into the undergrowth.

I had prepared myself for the launch a few days earlier back in Australia by taking a current model Scrambler Café Racer for a blast in the amazing hills behind Adelaide. The 2018 Café Racer felt a bit raw and vibey, which also provided a strange kind of charm, typical of an Italian sports machine. It took three sets of traffic lights to work out a clean operation of the cable-operated clutch but the Café Racer was rewarding to ride. Once you get the engine into the sweet spot you can hold the same gear and revs for a series of corners, even while chasing a supercharged V6 Lotus Exige coupe that had unexpectedly appeared on the winding and empty midweek road. I was having as much fun for around $20k as that person was for $150k. 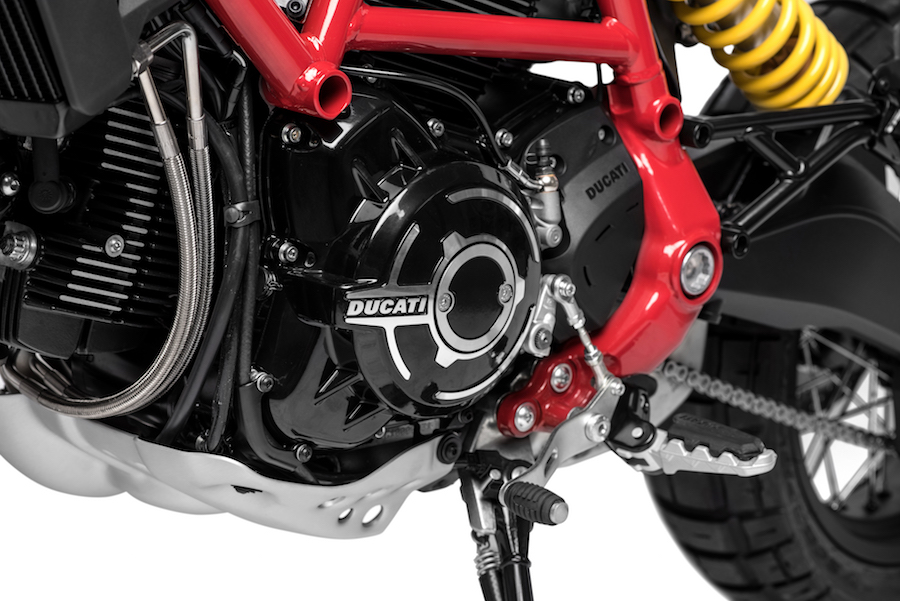 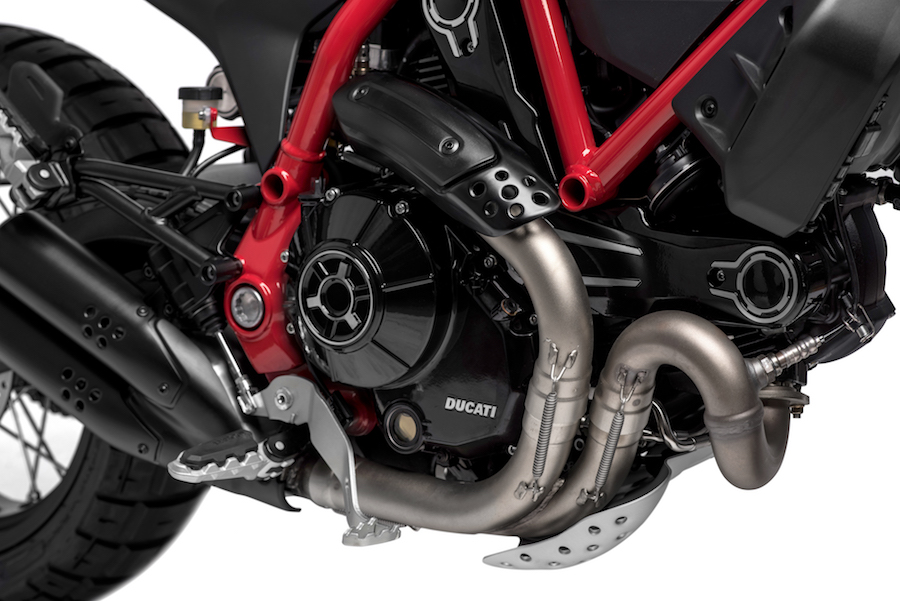 It was great but I’d had to learn how to ride the 2018 Café Racer. By contrast, the moment I took off on the 2019 Icon, I felt like I’d been riding it for months. The engine was smooth, reasonably torquey but with plenty of revs to play with if required. The hydraulic clutch was a world away from the older Scrambler and the seat and riding position felt perfect for the long day of riding ahead.

As the morning progressed the Icon revealed several sides to me. Along the high-speed freeway it felt like a cruiser. But the high handlebars I’d been a bit wary of didn’t turn me into a windsock. This was because the seating position had me tucked down low in the saddle. So it was easy to stay upright and comfortable at an indicated 130km/h. Then on the windy climb into the hills it felt a bit like a supermotard. As I moved forward on the long seat to get my weight over the front end, I attacked the hairpins with confidence.

As the tight turns became bumpy sweepers there was not a hint of the weave you’d expect despite the revised suspension being plusher that the older model. Ducati has put a noticeable amount of technical support into the 2019 range.

Added to this is the reassurance of cornering ABS. It’s another major update and on the highest setting, I could only get the rear activated and that was with the Icon upright. 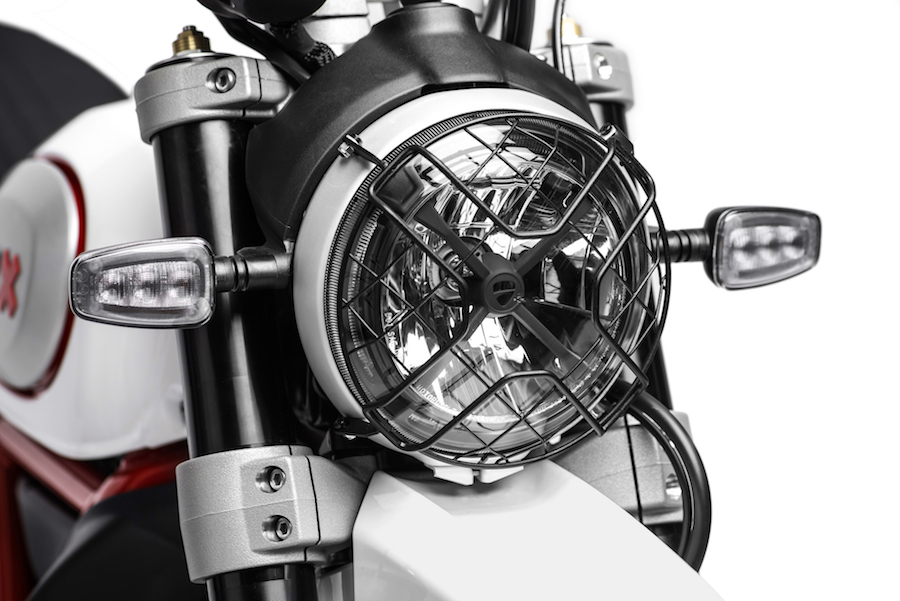 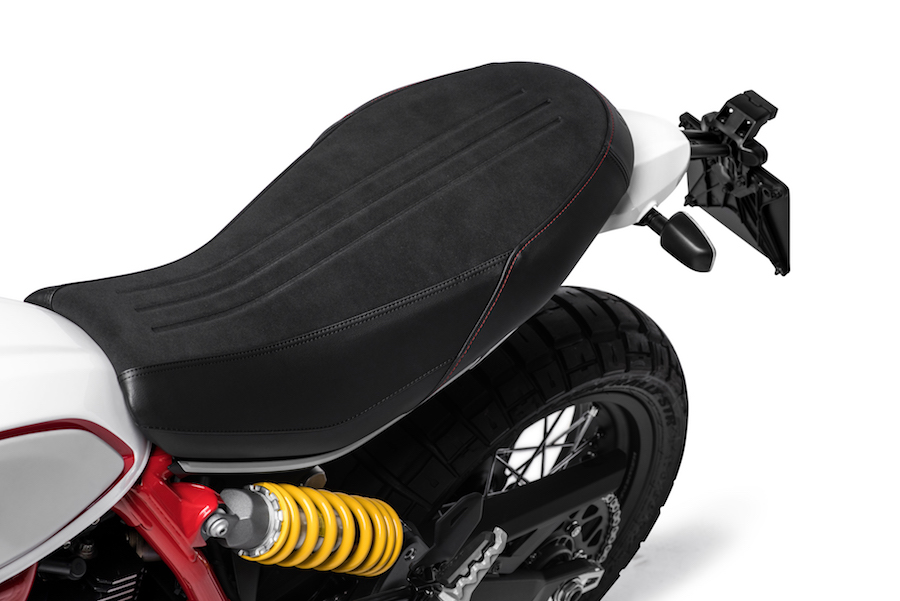 Ducati says the Icon is aimed at new and returning riders along with experienced buyers who prefer a compact, undemanding motorcycle. The Icon meets all these criteria but it’s much more than that. Owners of existing Scramblers would find updating to the 2019 model well worth it as it is a very different package to the old.

Although sharing the basic engine and chassis architecture of the Icon, the Desert Sled felt like another model. Instead of the Icon’s two-into-one exhaust, the Sled has a two-into-two that gives an aggressive bark. Idling at standstill, the Sled looks and sounds quite a brutal bike; built to be ridden hard and perhaps a challenge to master.

The actual experience is the opposite. The seat, at 860mm (optional 840mm available) meant I could easily get a foot down at standstill. The wide handlebars and rangy seating position suited my body size and the engine was happy to grunt along at low revs or scream out on the open road until two warning rev-limiter lights flashed.

But things changed slightly when we hit the first gnarly bits on a dirt road. When I stood up on the ’pegs, I found it difficult to locate the brake pedal to slow and equally difficult to hook my foot under the gear lever to change up and go faster. These issues can be fixed with a bit of tweaking with spanners but on a one-day launch there wasn’t the time. It did detune my riding style until I found a compromise by ducking down to change up a gear and pushing my right foot hard into the engine to find the brake pedal. Then my off-road world got back on its proper axis and things turned out for the better.

In varied road conditions, from freeway to muddy gravel tracks to potholed tarmac lanes, the Desert Sled felt light, nimble and composed. And I felt relaxed, confident and slightly heroic on a good-looking motorcycle.

A lot of the Sled’s dirt-road competence is due to its upgraded and adjustable KYB suspension (46mm fork diameter with 200mm of travel) with ABS that can be turned off for dirt roads. But there was a sting in the tail. Despite a seat redesign, I got saddlesore after a couple of hours of non-stop riding, something that didn’t happen with the Icon.

It was a great day’s riding but at the end of it all did I prefer the Icon or the Desert Sled? Both are very competent models with their own focus. My head tells me to choose the Icon for its all-round practicality but my heart has chosen the raw appeal of the Desert Sled. A refined package built in Thailand that hasn’t lost its unique appeal of Italian passion mixed with motorcycling history.

Little things like a false neutral on a low-kay engine and awkward mirror adjustment remind you it’s still an Italian.