The Vee Two Hailwood Replica made its public debut on Saturday, August 25th in a special presentation at the Isle of Man Classic TT, alongside the original Ducati 900F1 that Mike Hailwood rode to victory in his famous TT comeback 40 years ago in 1978.

Steve Wynne of Sports Motorcycles, the original bike’s creator, said the all-new replica was: ‘Probably more perfect than the original bike.’ Later that day the original number 12 Ducati was ridden round the TT Mountain Course in a 100.80mph ton-up ‘parade’ lap by 23-times TT race-winner John McGuinness, immediately after he had won the 2018 Senior Classic TT on a 500cc Paton – his own comeback to racing after being sidelined for 18 months with crash injuries. 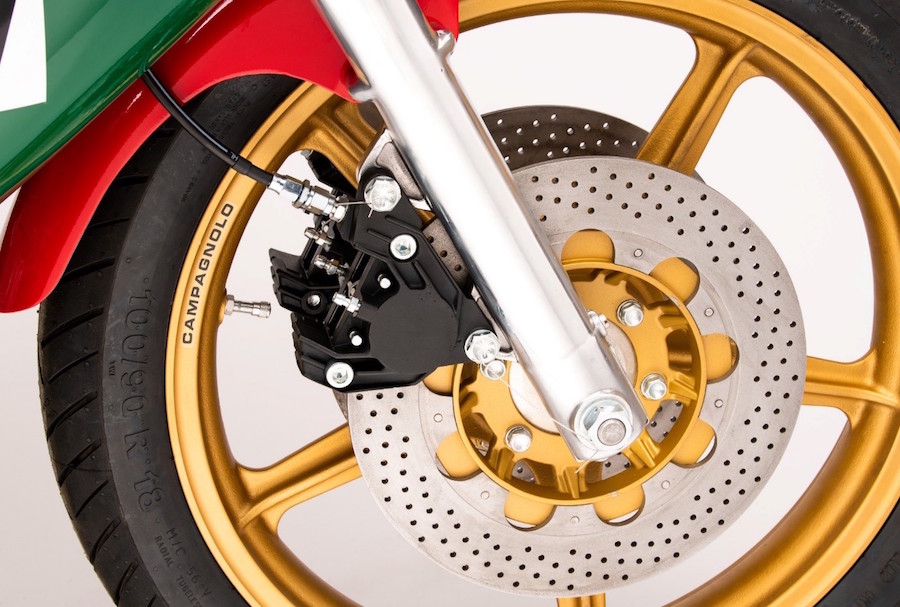 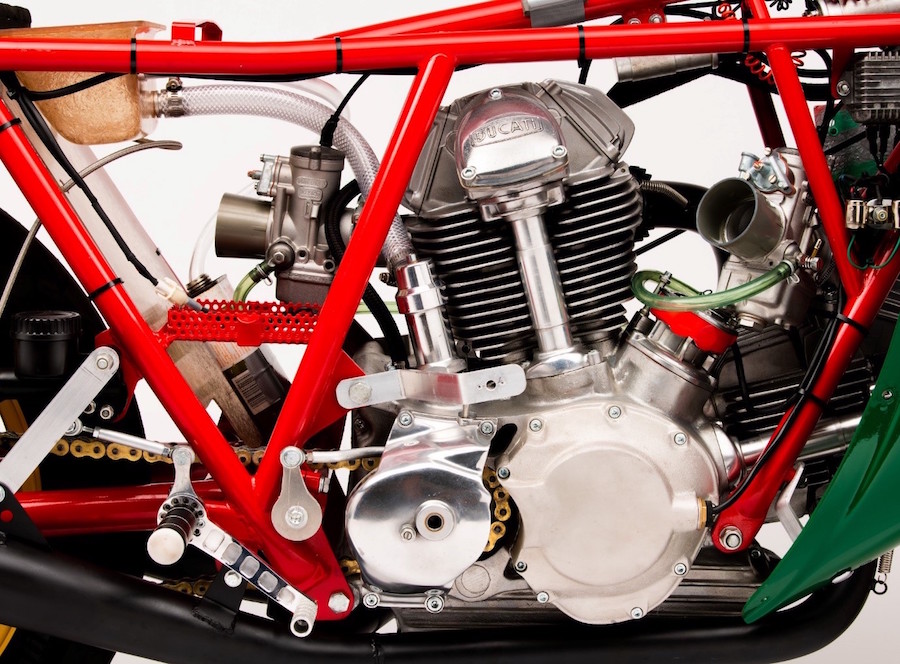 Charlie Williams said: “This bike features some fantastic engineering, and it’s a great tribute to Mike Hailwood.’ The 2018 Classic TT Festival has included an assembly of several hundred Ducati Mike Hailwood Replica road bikes, which have travelled to the Island from all over Europe, and beyond. But as Steve Wynne said: ‘There is only one replica – this one,’ adding with a smile that the Vee Two team’s constant questions about the tiniest details of the original machine, ‘were driving me mad!’ Steve Wynne bought, entered and prepared the original machine through his dealership Sports Motorcycles in Manchester, as well as arranging for Mike Hailwood to ride it.

Visitors to the TT Paddock stand have often found it difficult to spot the difference between the bikes, though one is 40 years old and the other brand new. Brook Henry of Vee Two fired up the 905cc twin to applause from an appreciative crowd. David Hailwood was due to demonstrate the Vee Two Hailwood, but the weather that has disrupted the Classic TT Festival, made this impossible.

Only 12 of the Vee Two Hailwood bikes will be built, reflecting the race number Mike’s bike wore in his celebrated 1978 F1 TT win. The £110,000 machine has taken 18 months to create. Each owner will receive a personalised souvenir book about the bike’s evolution written by Paul Barden.

There were many comments on the price, but as one visitor said: ‘I’ve been looking at an original Ducati Hailwood Replica road bike, but the owner wants £35,000 for it. When you consider that is a road bike and the V2 is an exact hand-made copy of a historic race bike, it does make you think.’ Ducati sold over 7,000 examples of the ‘replica’ road bikes, which are in fact rebodied 900SS street machines. The 12 Vee Two bikes are highly-detailed replicas of the bike that Hailwood rode to his final World Championship and 13th TT victory after 11 years away from the saddle – considered one of the greatest comebacks in sporting history.

The Vee Two Hailwood has been created by Brook Henry and Paul Taylor, through their new joint venture Vee Two USA. Brook Henry produces the engines in Perth, Western Australia, while the chassis, bodywork, decoration and final assembly is carried out at Paul Taylor’s Taylormade Racing factory in Los Angeles.

Bike designer John Keogh, a long-time collaborator of both Henry and Taylor, is also involved in the project. Vee Two USA specialises in Ducati tuning parts and accessories, especially for the first-series bevel-drive V-twin models. The Hailwood Vee Two is powered by the all-new Ritorno 905cc bevel-drive desmo V-twin engine, an exact copy of the factory engine which Mike used to win the race. 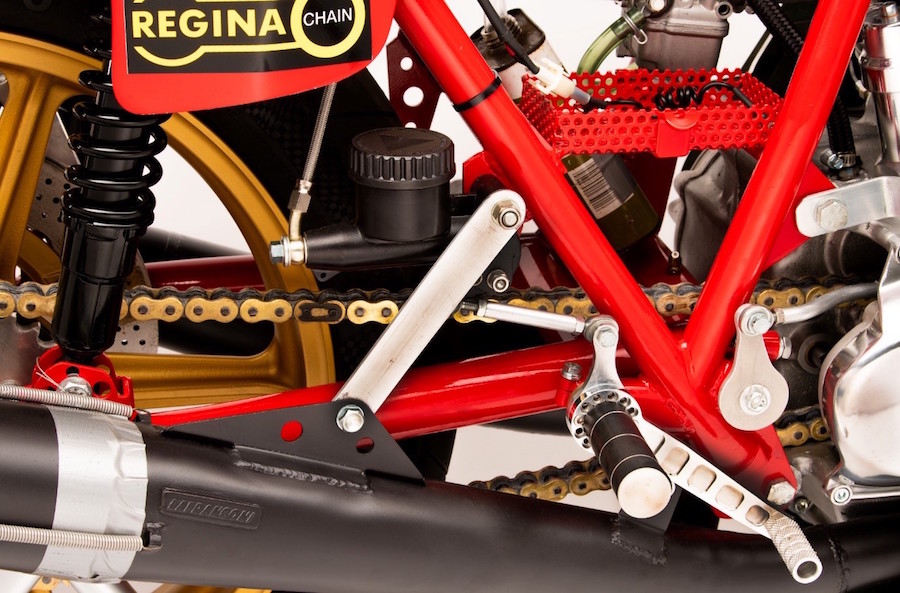 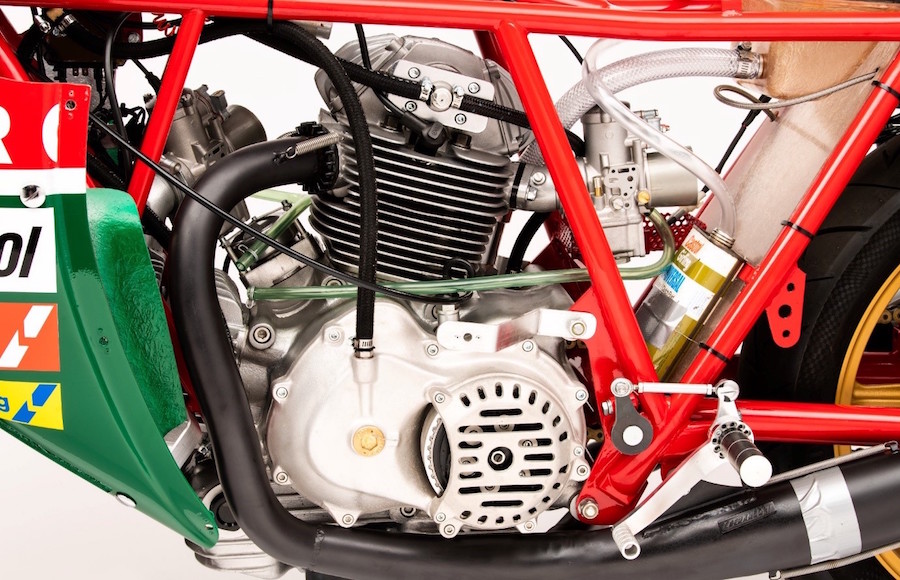 The arrival of the Vee Two Ritorno engine has made the project feasible. Mike Hailwood’s original TT-winning Ducati was powered by a factory prototype bevel-drive engine which was never put into production. Brook Henry has acquired the original casting patterns, factory drawings and manufacturing rights to build this engine design once more.

He said: ‘It has always been my dream to construct this bike, but it wasn’t possible without the Ritorno. I have worked hard to make it externally identical to the 1978 engine, but it is thoroughly-modern inside, with the latest technology and materials giving 89 bhp performance.’

Paul Taylor said: ‘The look of the bike is exactly as raced on June 3rd, 1978 – a true Hailwood replica, but it has been very difficult to get to this stage because of the lack of detailed information.’ The Vee Two team was allowed exclusive access to the genuine bike, owned by New Yorker Larry Auriana, though the real machine has detail differences to the Vee Two machine, because of racing accidents and rebuilds after the 1978 TT.

Paul Taylor said: ‘We are very proud of what we have achieved, but the bike is a prototype and no doubt there are some details to improve before we are satisfied that it is the most exact replica we can make.’

After researching the bike, John Keogh said: ‘The Vee Two Hailwood a stunning machine and we hope people will agree that it is the most authentic replica of this celebrated machine, yet made, plus it has the blessing of both Pauline and David Hailwood, and Sports Motorcycles’ Steve Wynne.’