Triumph tears the covers off its all-new Speed Triple RS

All-new in every dimension, the Speed Triple 1200 RS has been purpose designed from the ground up to deliver an absolute revolution in terms of Speed Triple power, performance, handling and technology, giving the ultimate performance naked sports ride.The new Speed Triple 1200 RS will be available in Dealers from March with pricing announced for Australia at $25,600 + on-road costs. 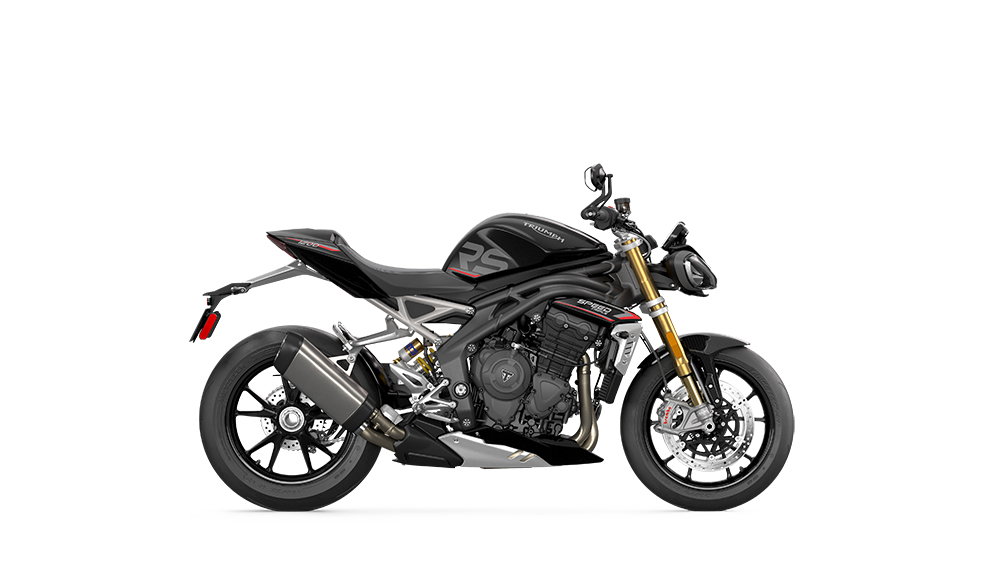 All-new engine
The powertrain has been completely re-designed, with every single element engineered for increased performance and reduced mass, making the new engine significantly lighter, by 7kg. It’s more compact compared to the previous Speed Triple powertrain, despite the bigger capacity, giving the new model the perfect balance of aggression, performance and control. 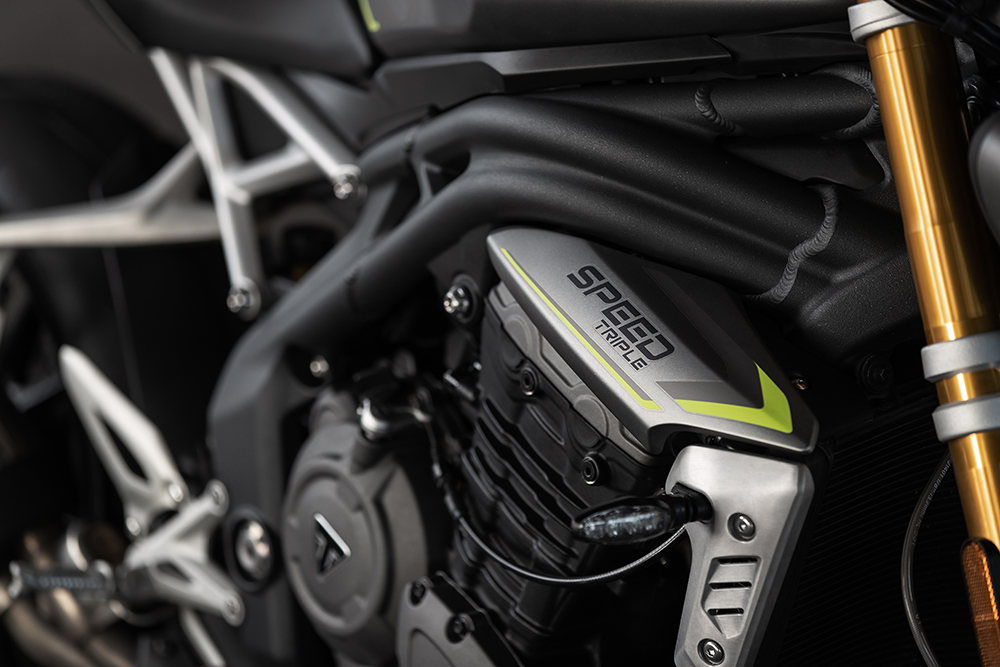 The engine delivers blistering new performance, with 30PS more power and a peak of 180PS at 10,750 rpm. It revs harder, with the red line now raised by 650 rpm to 11,150rpm, and maintains all of the incredible torque and character in the low and mid range that the Speed Triple has always been renowned for, with 125 Nm peak torque at 9,000rpm, 8Nm more than the outgoing model. 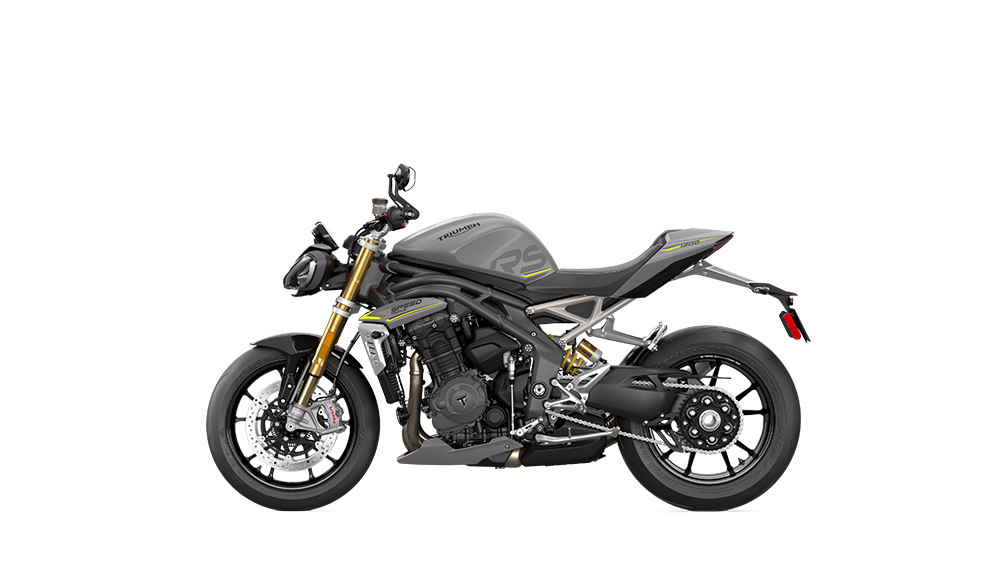 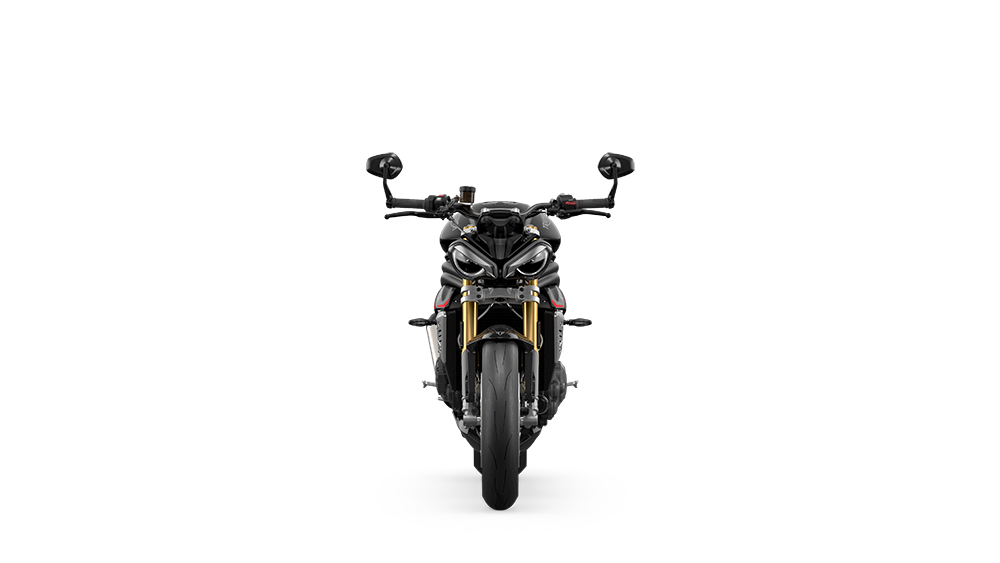 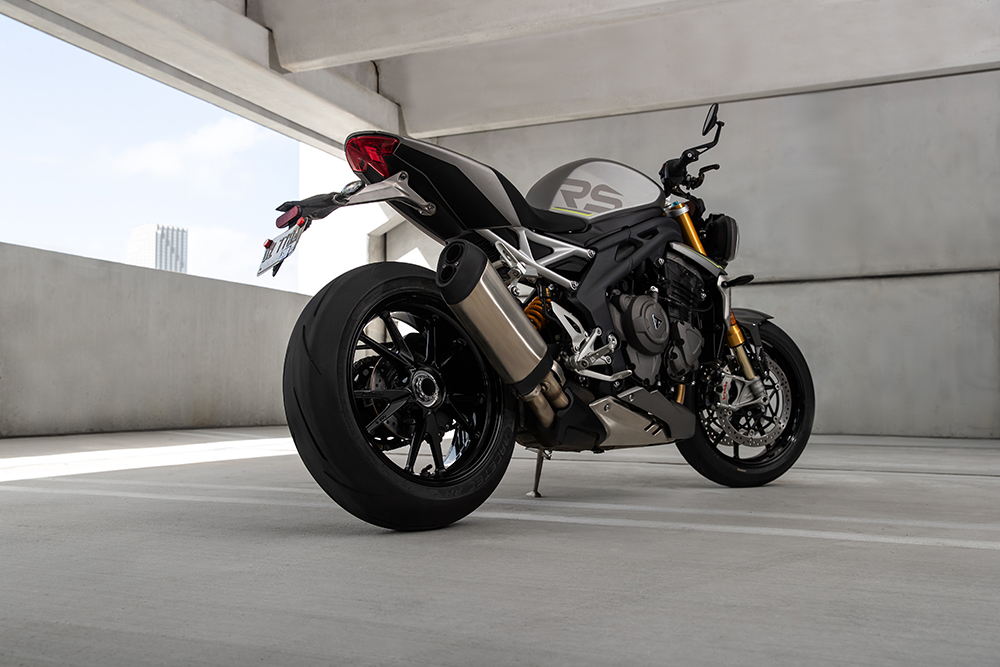 Optimised new clutch and gearbox
There is a new lighter weight slip and assist clutch which uses state-of-the-art friction compound to reduce the number of clutch plates, minimising mass and improving clutch feel, while maximising control during high speed downshifting.

Combined with a completely new, and more compact, stacked 6-speed gearbox, gear changes are significantly smoother than the previous generation, with an optimised ratio progression.

Performance is further enhanced by the new ignition system, with twin tip spark plugs for increased durability at high engine speeds as well as by a reduced weight of the cooling system, neatly packaged with an integrated oil circuit heat exchanger. 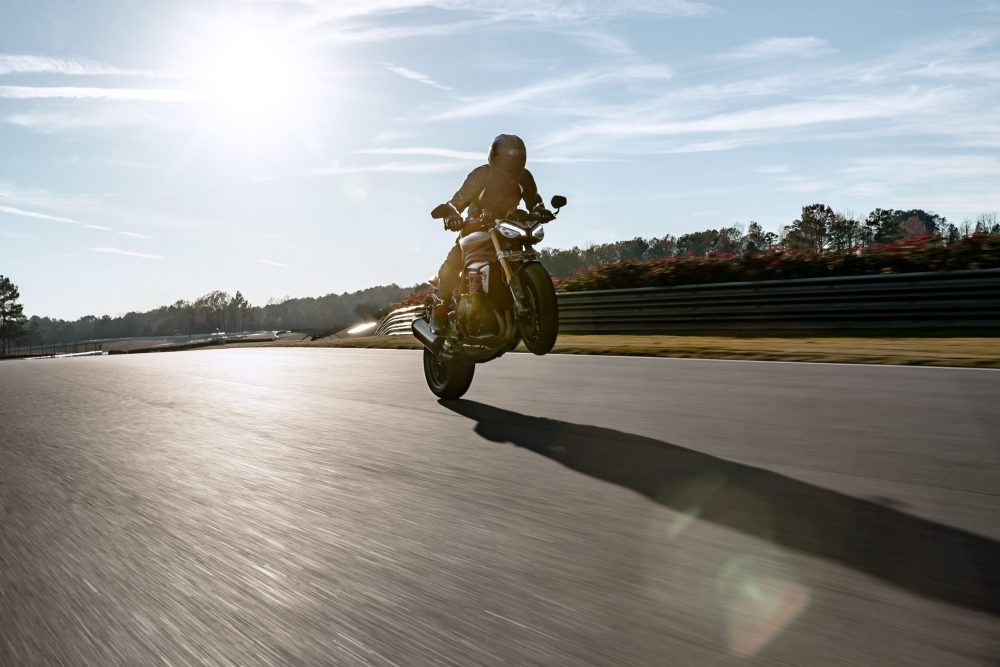 THE MOST AGILE, PRECISE, DYNAMIC AND RESPONSIVE HANDLING SPEED TRIPLE EVER.

All of these improvements combine to deliver a new Speed Triple 1200 RS that’s been designed to feel as agile and dynamic to ride as a Street Triple RS. 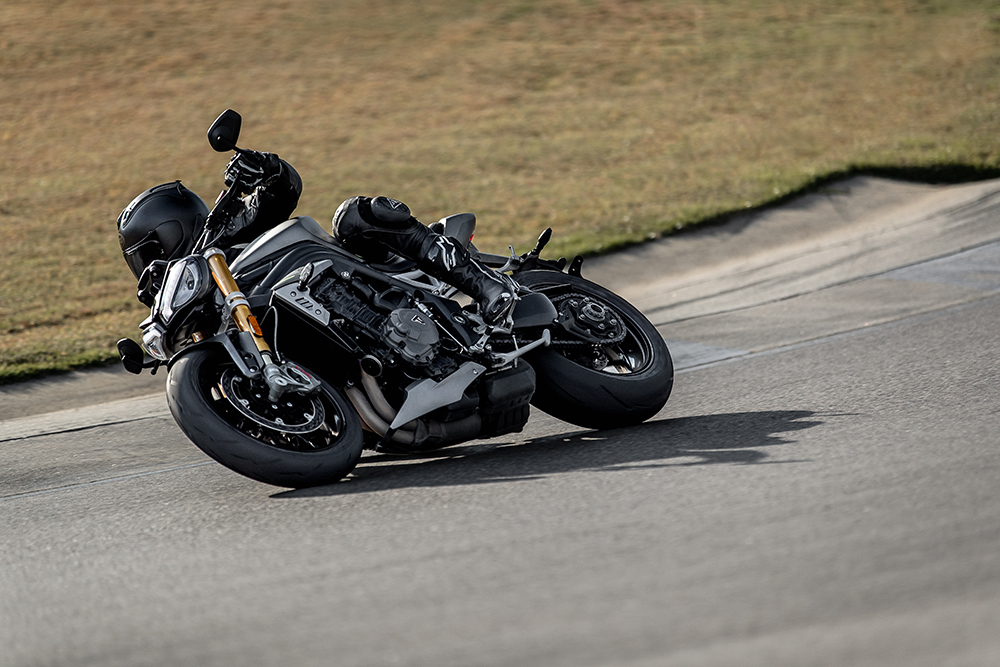 All-new lightweight chassis
The all-new chassis has been designed from the ground up to deliver the lightest and best handling Speed Triple ever, with even more agile, precise and dynamic handling, in a tighter, more toned, and mass centralised package.

With a wet weight of just 198kg, the new bike is an incredible 10kg lighter than the previous generation. It has a 17% lighter cast aluminium frame with weight distribution that is further forward and lower down.

Substantial improvements have also been made to the seat profile and construction, which is now more comfortable, while allowing the rider to take a more natural tucked-in position for focussed riding. Seat height is a comfortable 830mm. 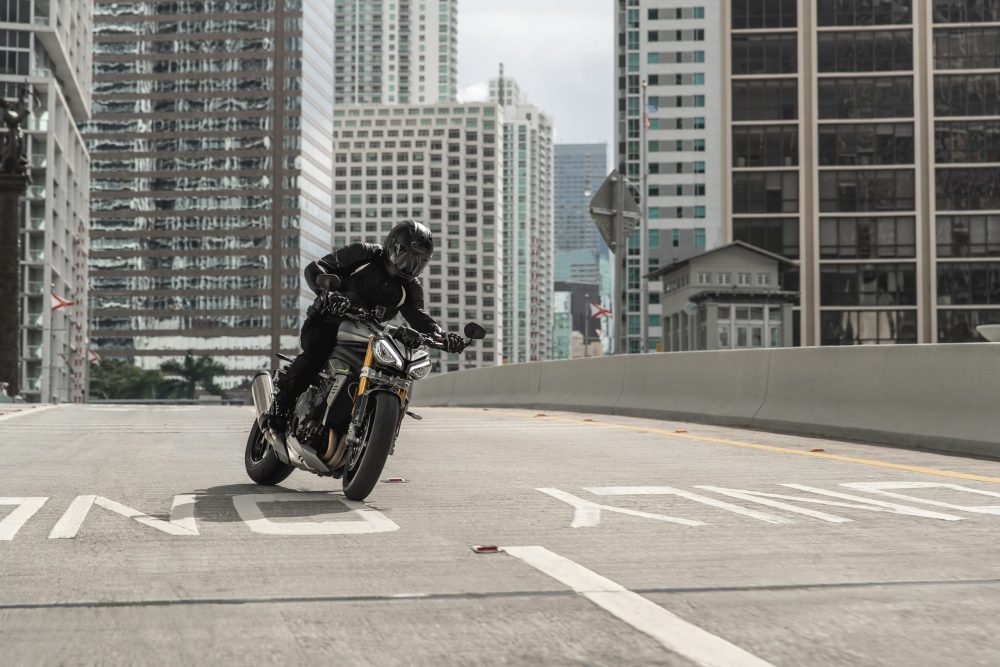 The fully-adjustable Öhlins suspension both front and rear has been tuned to deliver the optimum balance of performance, comfort and control. 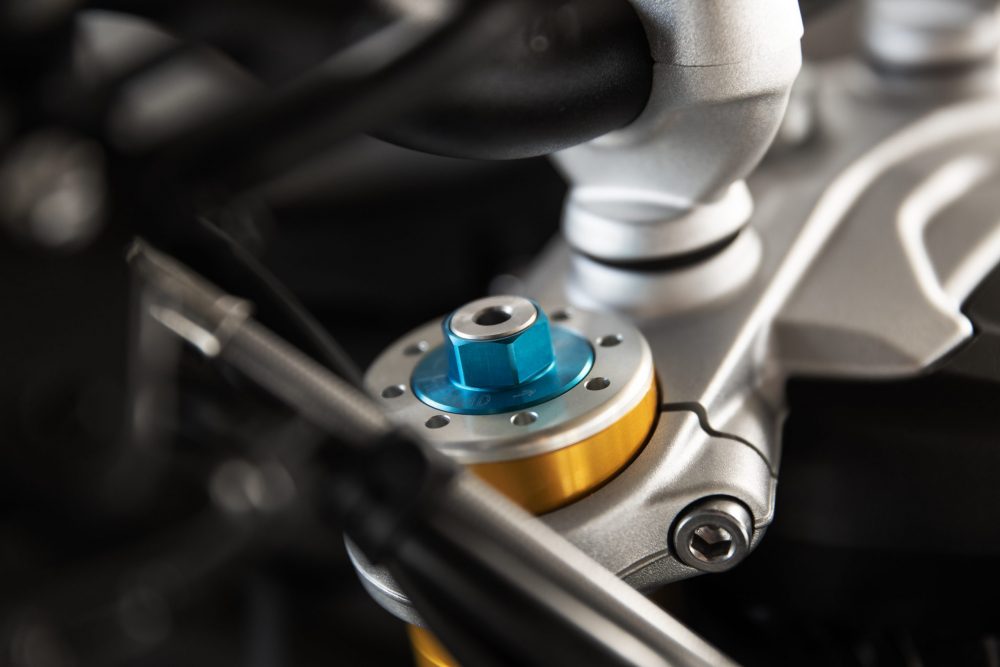 The entire suspension package has been tuned for the bike’s lower weight, higher power and torque, and new geometry, and developed to feel just as at home on the track as it is on the road. 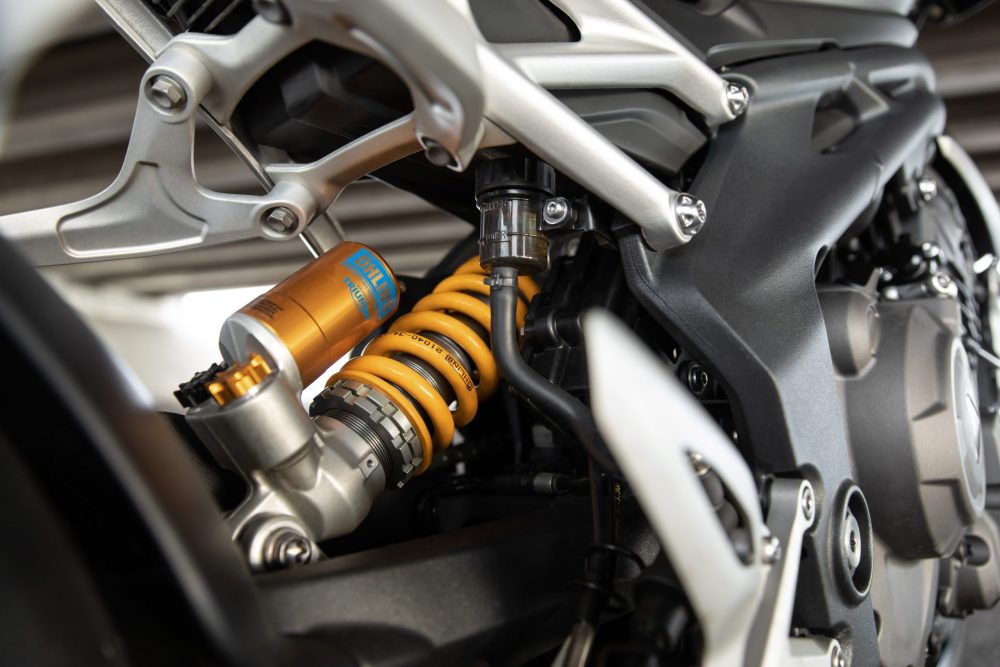 High performance Brembo brakes
Incredible stopping power is provided by the new Brembo brakes on both front and rear.

On the front, the new high-performance twin Brembo Stylema® radial monobloc front calipers, with lighter 320mm front discs, ensure track-ready braking power, and on the rear a single Brembo twin-piston rear caliper enables the rider to balance the braking effort and enhances the overall control of the bike both on the road and on track.

A Brembo MCS span and ratio adjustable brake lever is available to further enhance the rider’s comfort and control. 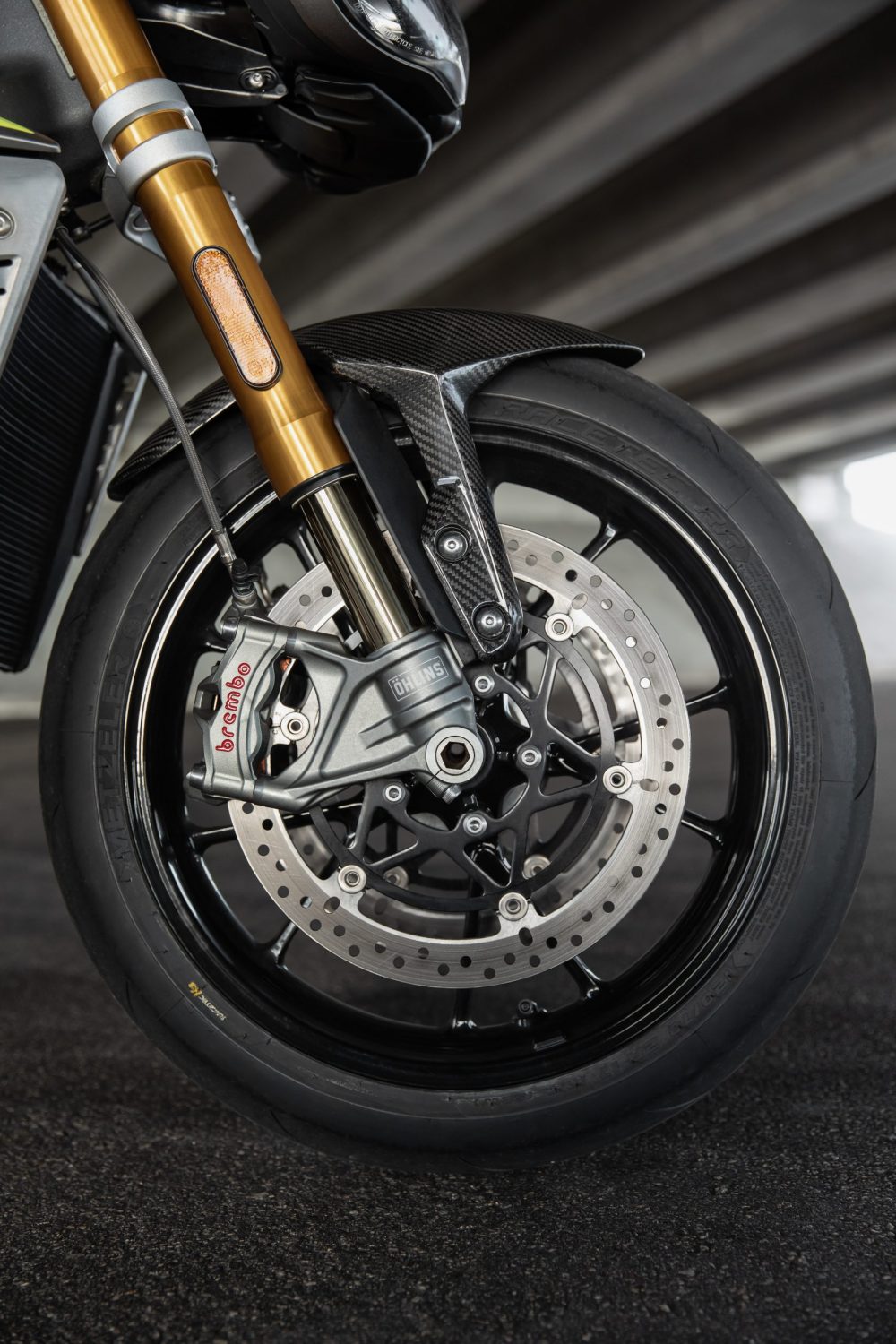 Exceptional grip
The standard tyres fitted to the new Speed Triple 1200 RS are the high-performance Metzeler Racetec RR, which are Metzeler’s highest specification tyres approved for road use, and are capable of delivering optimum performance both on the road and on track.

Additionally, the Pirelli Diablo Supercorsa SC2 tyre can be fitted to the new Speed Triple 1200 RS as a factory approved track option. 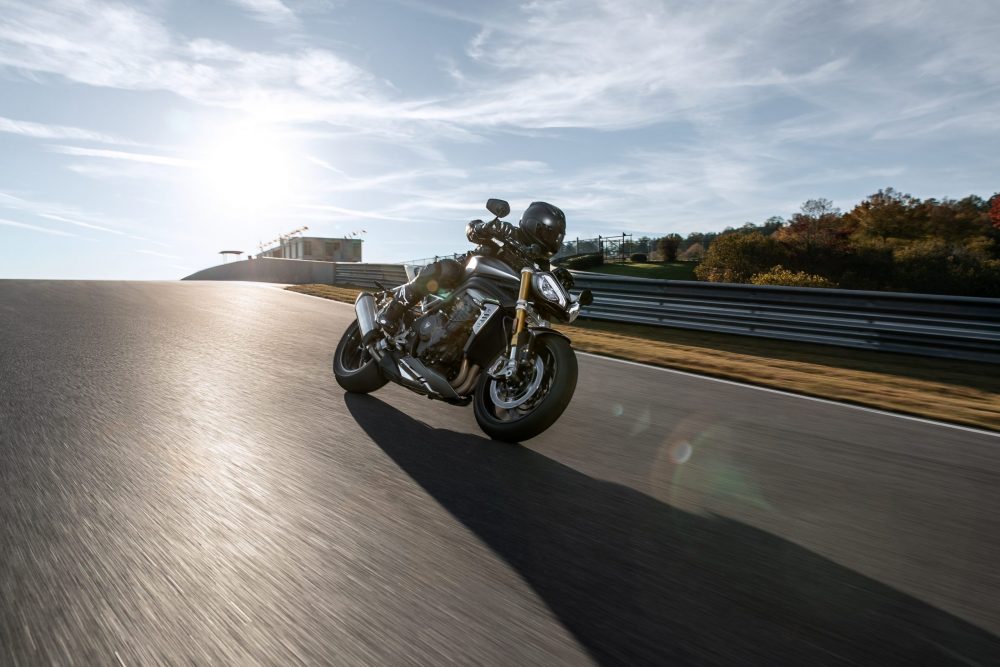 THE SMARTEST, SHARPEST AND MOST TECHNOLOGICALLY ADVANCED SPEED TRIPLE EVER. 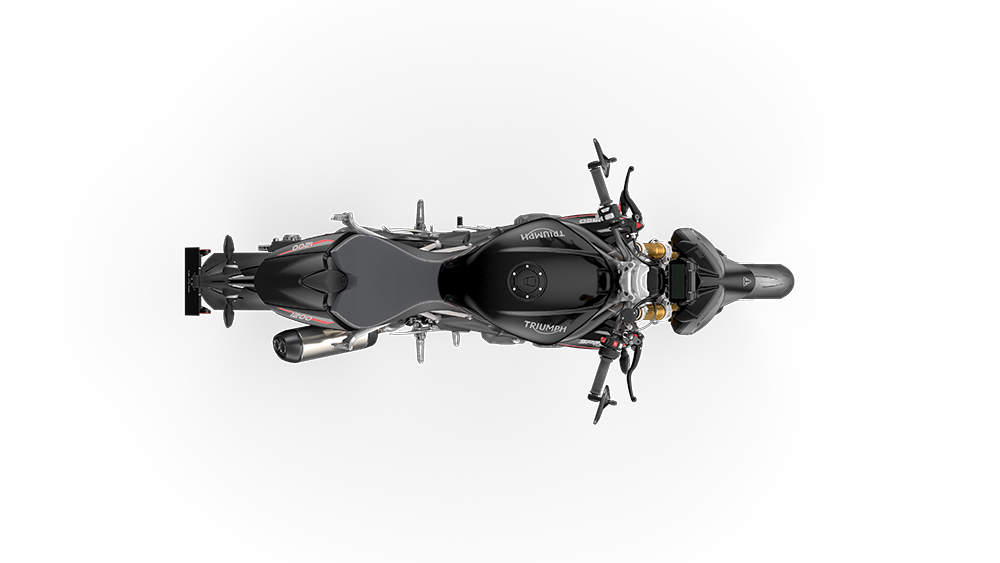 Both the TFT screen itself, as well as the user interface, are completely new, designed to provide the rider with the capability of applying more on-the-go adjustment compared to the previous generation, such as the ability to change traction control settings while riding.

Key information is clearly available for the rider, who will instantly be able to know their speed, gear and tacho thanks to the new TFT display and its new configuration, with space being created for any additional information or menus by sliding the tacho to the side as required.

The layout of the TFT screen is available in two different themes, which change the colour scheme of the display, and the new optically bonded 5-inch screen guarantees less reflection and therefore improves the image clarity in any lighting condition.

A lap timer is also included for track use. 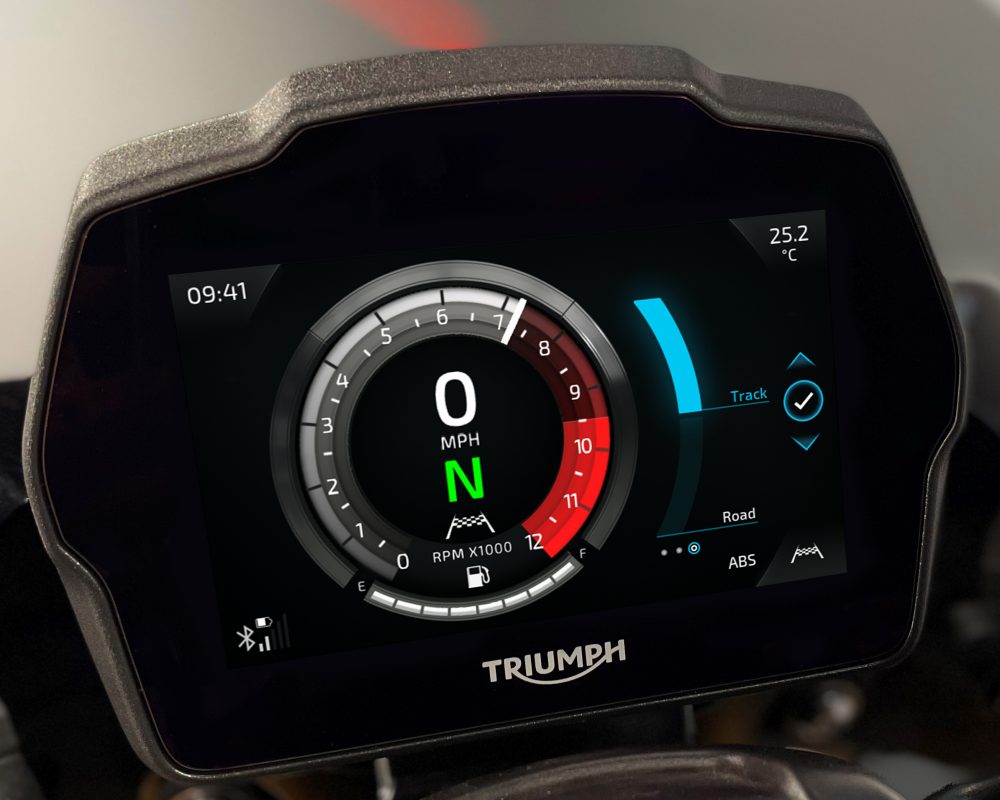 Speed Triple owners can now access turn-by-turn navigation via the free My Triumph app, GoPro control, phone control and music operation. The rider is able to control all of this through the switch cubes and will access all related information through the TFT screen.

A new Triumph Shift Assist up and down quickshifter is part of the standard equipment.

Ideal for spirited riding and track use, it enables clutchless up and down shifts while maintaining the throttle position, ensuring smooth, effortless and refined gear shifting both while accelerating or decelerating, thanks to its new variable position sensor, which ensures an optimised shifting position. 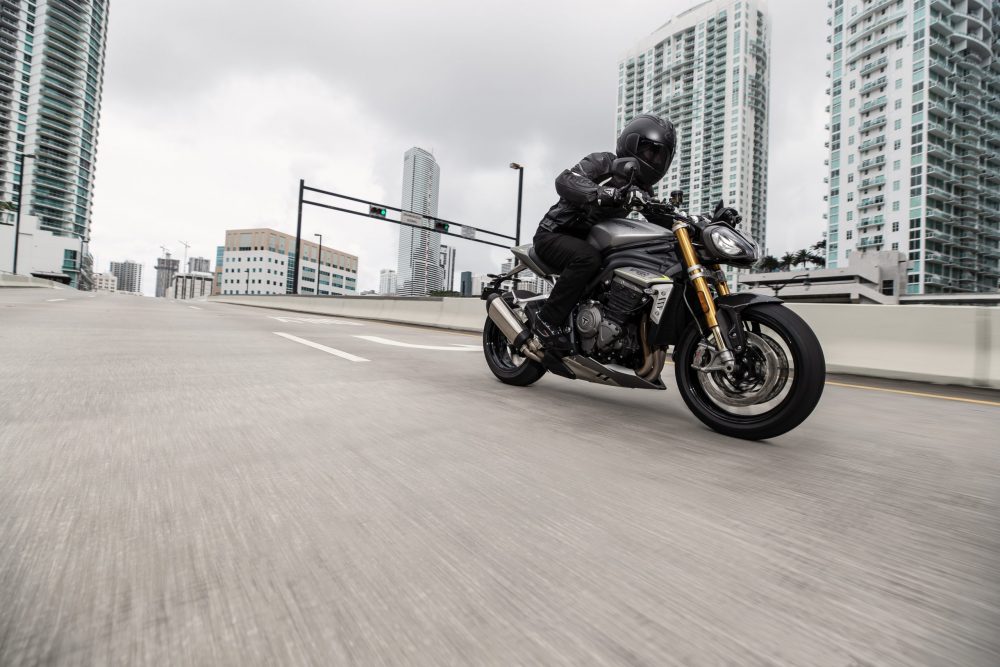 The system is adjustable through the TFT instruments and left-hand switch cube, and offers two selectable levels of intervention, “Road” and “Track”. The “Track” settings have been tuned to be unintrusive, and virtually imperceptible during fast track riding. The ABS settings are linked to the riding modes, but can also be selected independently if the rider chooses.

There are 4 levels of intervention to choose from (“Rain”, “Road”, “Sport” and “Track”), plus the ability to turn traction control off completely.

Again, the “Track” setting has been developed in order to maximise forward progress and minimise perceived intervention when riding hard. Traction control settings are linked to the riding modes, but can also be independently adjusted. 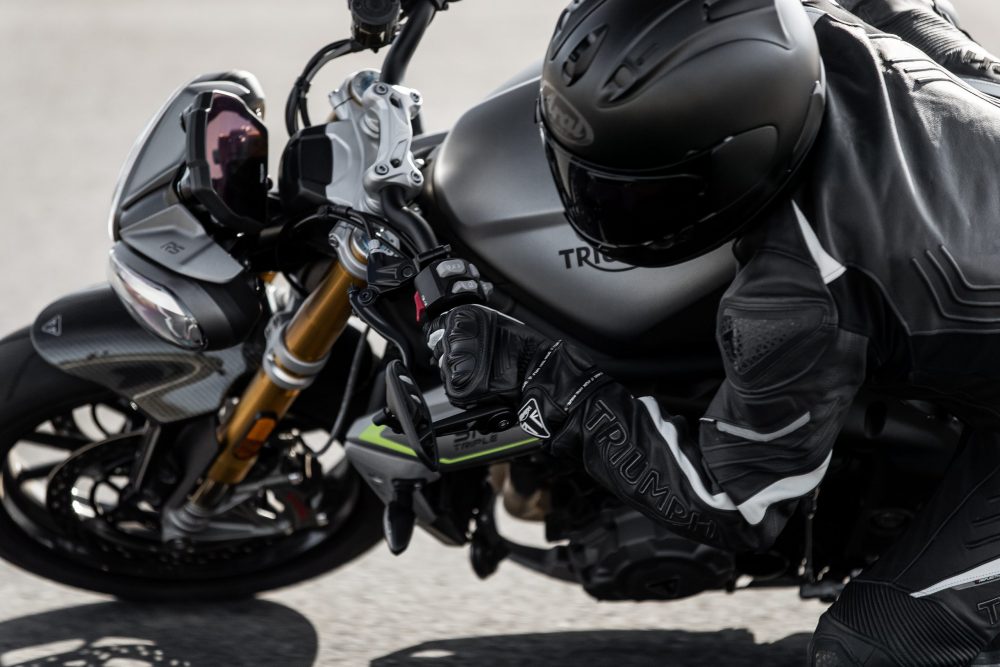 Enhanced front wheel lift control
The enhanced front-wheel lift control is designed to enhance rider control of the new 1160cc triple engine, without feeling intrusive to the rider, and has advanced new algorithms that continuously monitor the signals from the IMU to ensure smoother control and faster progress. The settings are linked to and optimised for each traction control mode, allowing the level of intervention to be tailored to the conditions and riding style.

5 customisable riding modes, with enhanced “Track” mode
The new Speed Triple 1200 RS features 5 distinct riding modes: Rain, Road, Sport, Track and Rider. Each riding mode adjusts the behaviour of the bike to suit the intended use. Thanks to the ride-by-wire throttle system, the throttle response is adjusted according to the selected riding mode, as well as the traction control and ABS settings.

The new enhanced “Track” mode has been specifically designed to be as unintrusive as possible in track riding, while still providing the reassurance that the electronic systems are there to help in unexpected situations.

When in wet conditions, the rider can select the “Rain” riding mode, which reduces the power down to 100PS and increases the level of intervention of the other safety features.

Riding mode adjustments are easily accessible through the switchgear while riding.

Distinctive new all-LED lighting
Safety has been further enhanced thanks to the stunning new aggressively styled lighting system on the new Speed Triple 1200 RS, which includes the new LED headlights with incredibly distinctive new daytime running light signature (market specific), that are now brighter and whiter for enhanced visibility on the road.

The attractive new tail light is equally distinctive, and has been completely redesigned with a unique signature LED design, delivering a more compact silhouette to the rear.

Self-cancelling indicators are fitted as standard. 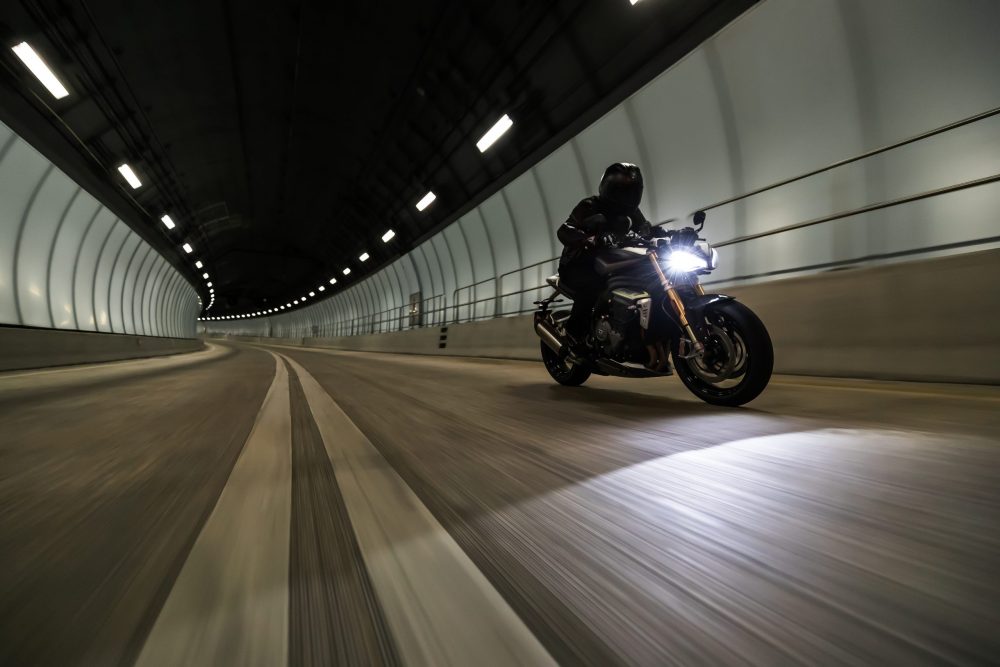 To ensure greater security, the keyless system can be disabled if required with the simple press of a button on the key fob.

Enhanced switchcube illumination
To complete the riding-aid features, the unique in segment backlit switch cubes now have a new more penetrative amber glow from the LEDs inside the switches, making them easier to read.

The new Speed Triple 1200 RS is the new definition of pure aggressive attitude, poise & style, with a muscular and arresting poise and presence, and purer, cleaner and sharper lines. Encapsulating all of the iconic Speed Triple design DNA, born from the category creating 1994 original, this new generation resets the benchmark for focussed Speed Triple attitude and style. 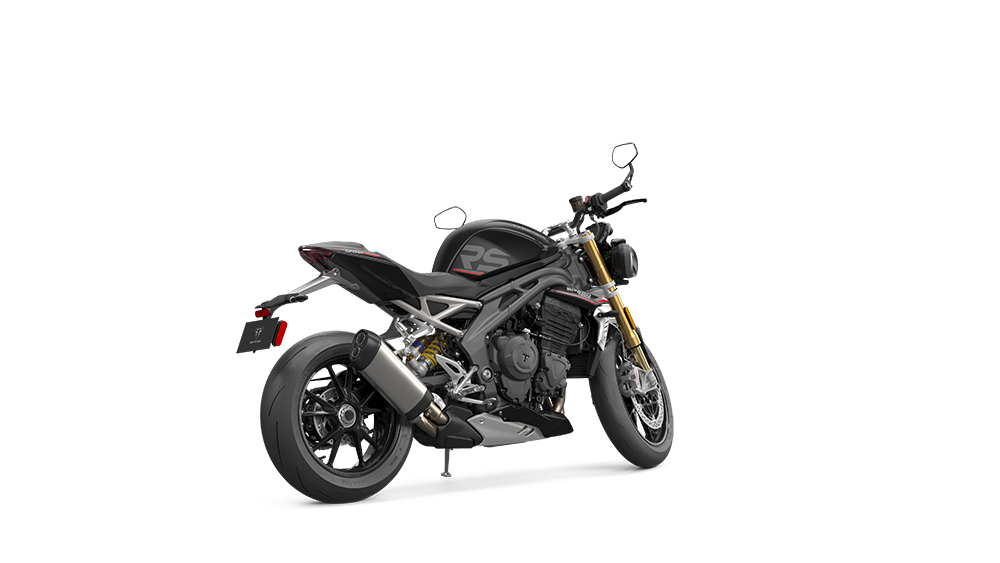 Triumph’s signature attention to detail
A host of premium finishes, including dramatic new RS graphics and a branded handlebar clamp, can be admired on the new Speed Triple and, like all Triumphs, the incredible attention to detail led to all the cables and hoses being hidden from view.

Service and warranty
Overall cost of ownership is reduced, thanks to the high 16,000 km service interval, and the 2 years unlimited kilometre warranty. 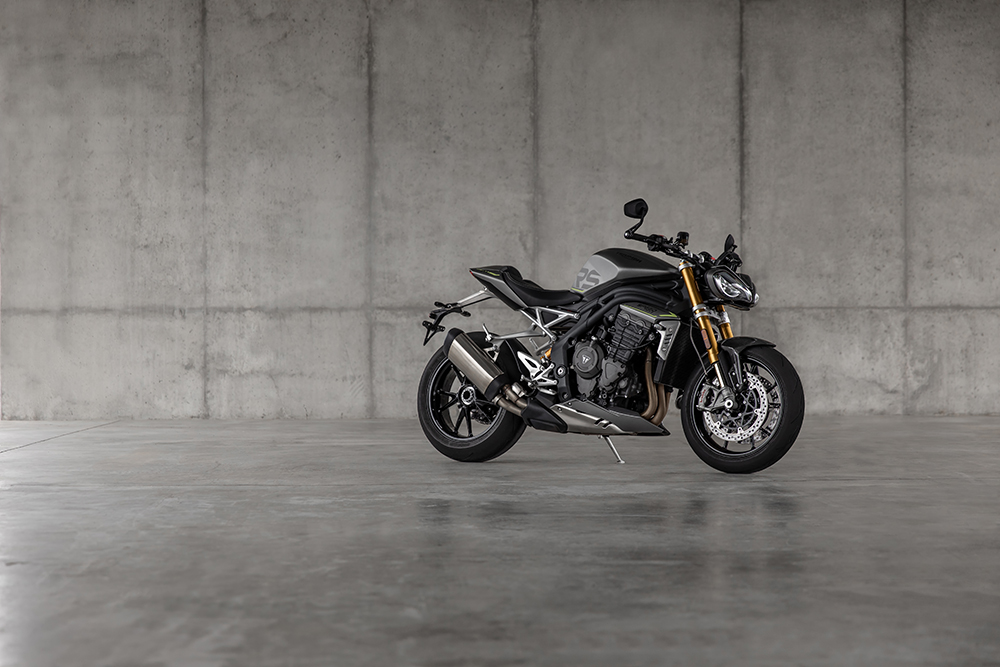