Triumph has revealed a ground-breaking sportsbike prototype it seems destined to put into production.

Called the Triumph TE-1, the Speed Triple lookalike is the result of a two-year-long experiment involving key players in the expanding UK electric mobility field. 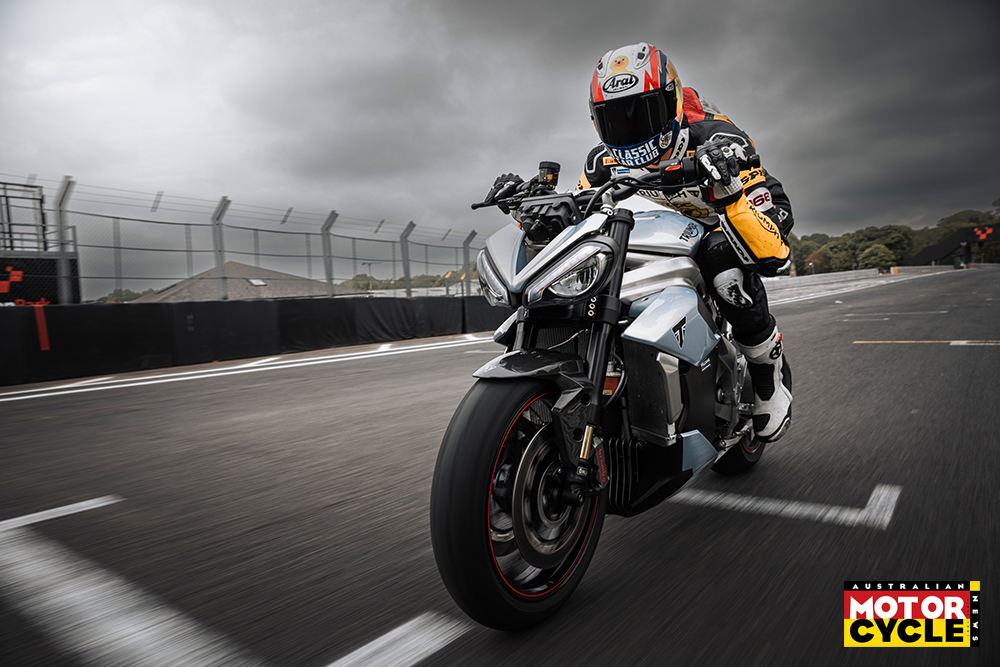 Triumph calls it a “prototype demonstrator” but it was obvious at the internet launch attended by AMCN that the TE-1 is pretty much production ready. We came to this conclusion because the more the Triumph development team’s representatives talked about the TE-1 the more obvious it became that the sleek-looking motorcycle sitting centre stage,  looking like a bird of prey with its distinctive twin headlights, was a finished product.

In what became “the launch you have when you aren’t having a launch”, the Triumph reps proudly talked about how their “prototype demonstrator” had exceeded all testing expectations and was a “game-changer” in the following ways. 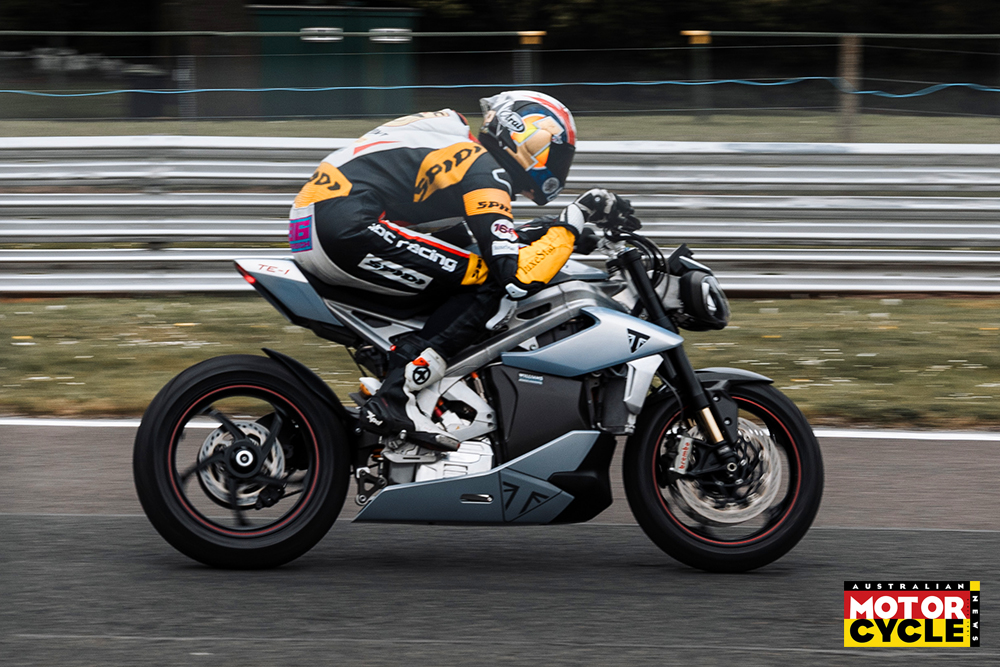 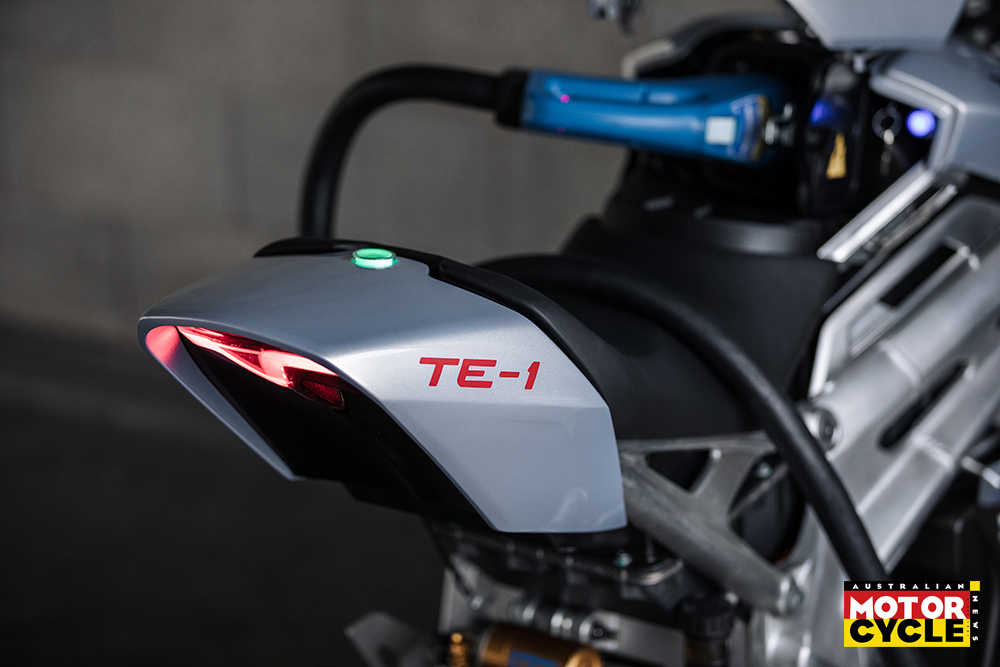 The Triumph TE-1 project has continued advances in battery and charging technologies in collaboration with Williams Advanced Engineering (WAE), resulting in a successful 20-minute charge time to 80% capacity. 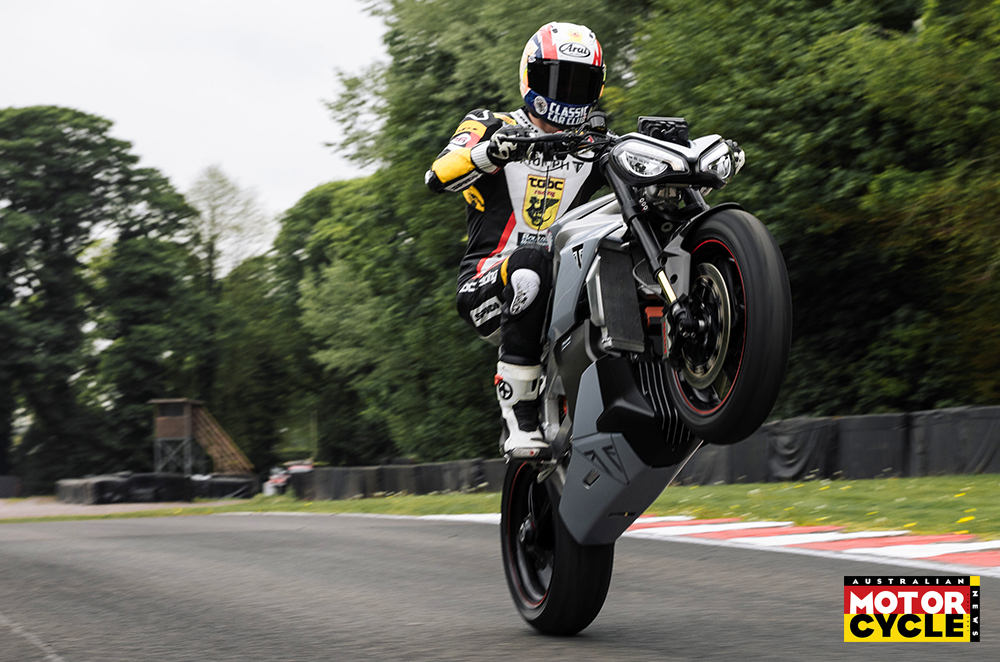 The weight of the e-bike has been trimmed to a stout 220kg, 106kg of which are all battery, it’s size is comparable to a Street Triple, but with the ergonomics, geometry and weight distribution of a Speed Triple. 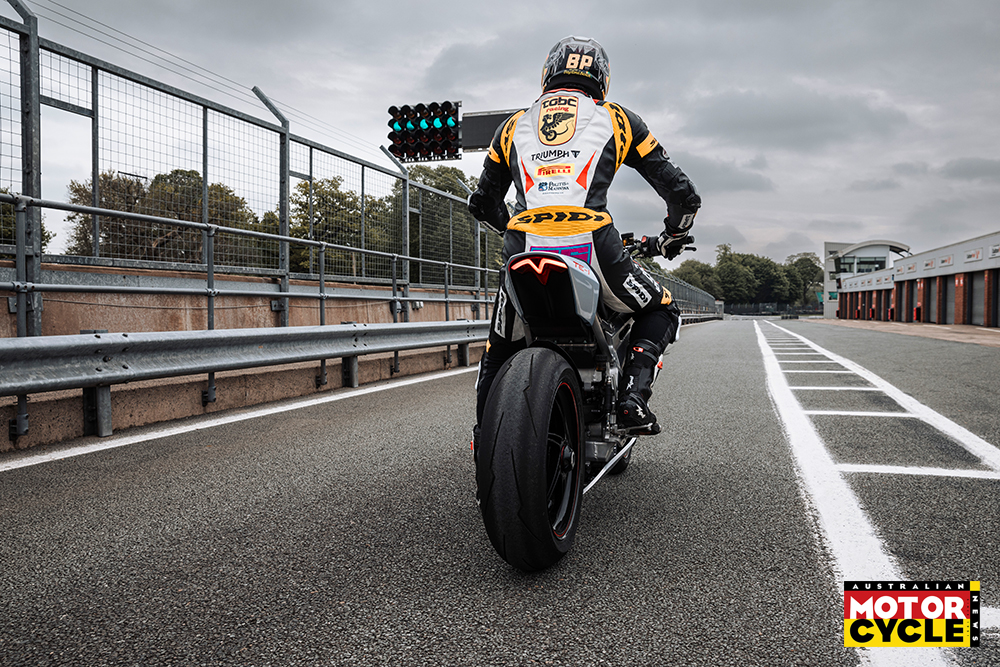 Most e-bikes are predominantly referred to as ‘quiet’, however the TE-1 emits the whine “of a jet turbine” thanks to the primary reduction gears. 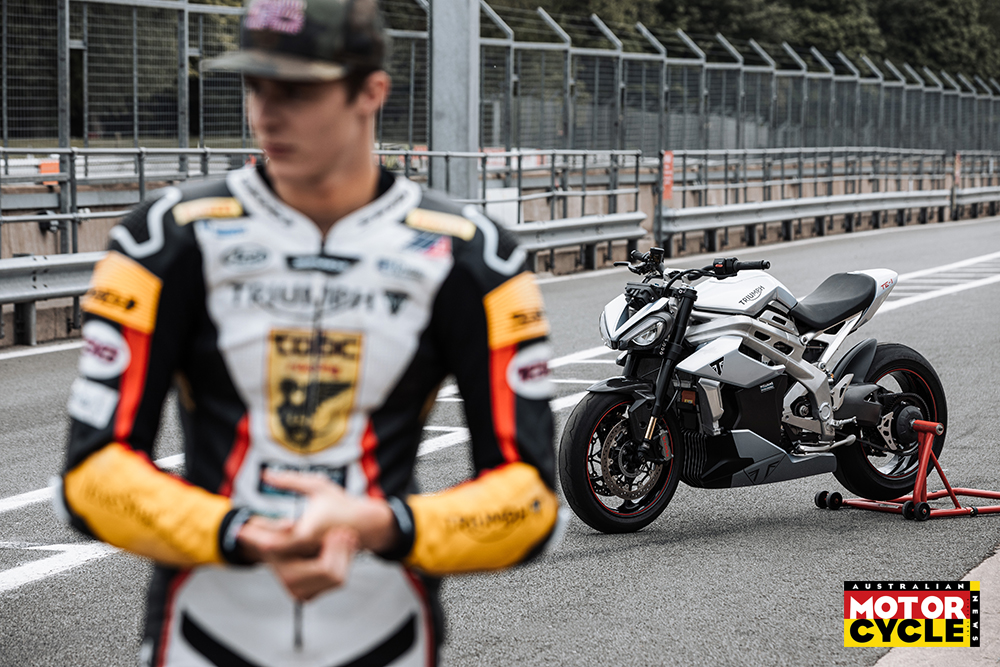 A deliberate effort has been made to create an “electric Speed Triple”, the TE-1 borrows heavily from Triumph’s ground-up-redesigned 2021 1200 RS.

The result is a motorcycle that has all the DNA of Triumph’s petrol-powered range while taking a huge step forward into eco-sustainability.

However, Triumph is adamant that the TE-1 is not intended to go into production in this form but is merely “an indication” of what its electric platform could offer in the future. When quizzed by AMCN, the Triumph reps said just two TE-1 prototypes exist: the one on display and a “rough test mule”.

AMCN believes the TE-1 has a strong case to be put into production as is. The demand for a high-end, stylish electric motorcycle from prestige brands was proven when Harley-Davidson subsidiary LiveWire’s limited-edition, flat-track-styled Del Mar sold out recently in just minutes.

Prestige automakers such as Porsche, Audi, Jaguar and even Bentley are starting to offer electric versions. This market segment is where Triumph could place the TE-1. It’s interesting to compare the TE-1 with the Del Mar. The Del Mar’s motor produces 59.6kW, half as much as the TE-1. Both have a similar range of around 160km. The Del Mar weighs 199.5kg. 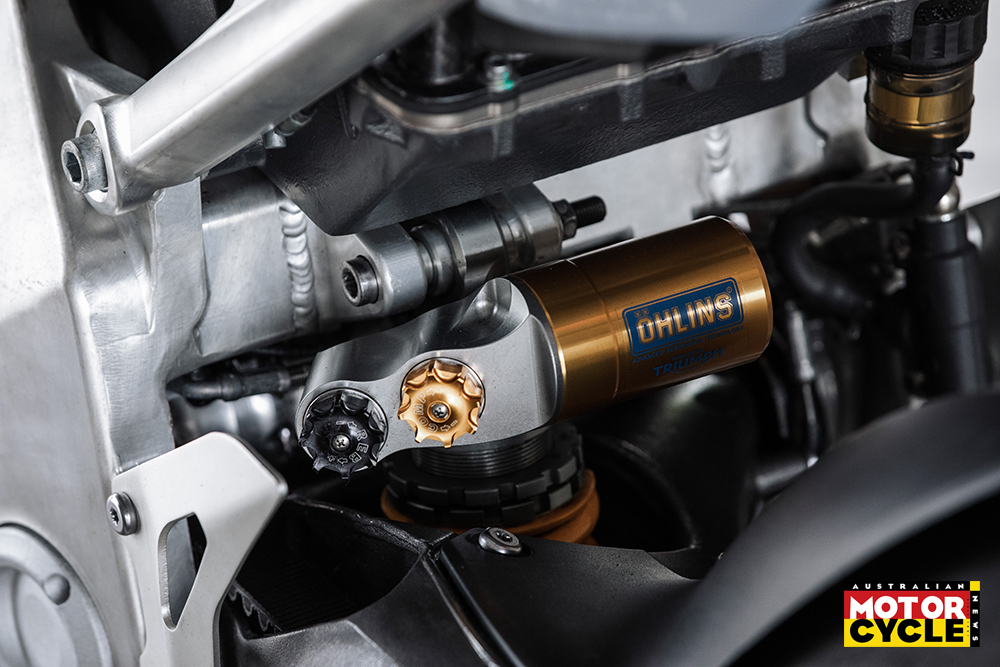 While the Del Mar is designed as a city cruiser, The TE-1 is all about performance, matching and even exceeding the Speed Triple 1200 RS in many areas. It has similar suspension and brakes to the RS and there are riding modes for rain/sport/track/unlimited.

This means it could be an excellent trackday bike and the fact that using all its power drains the battery in 20 minutes isn’t an issue because this is a typical trackday session time. Then it can be fast charged in just 20 minutes. 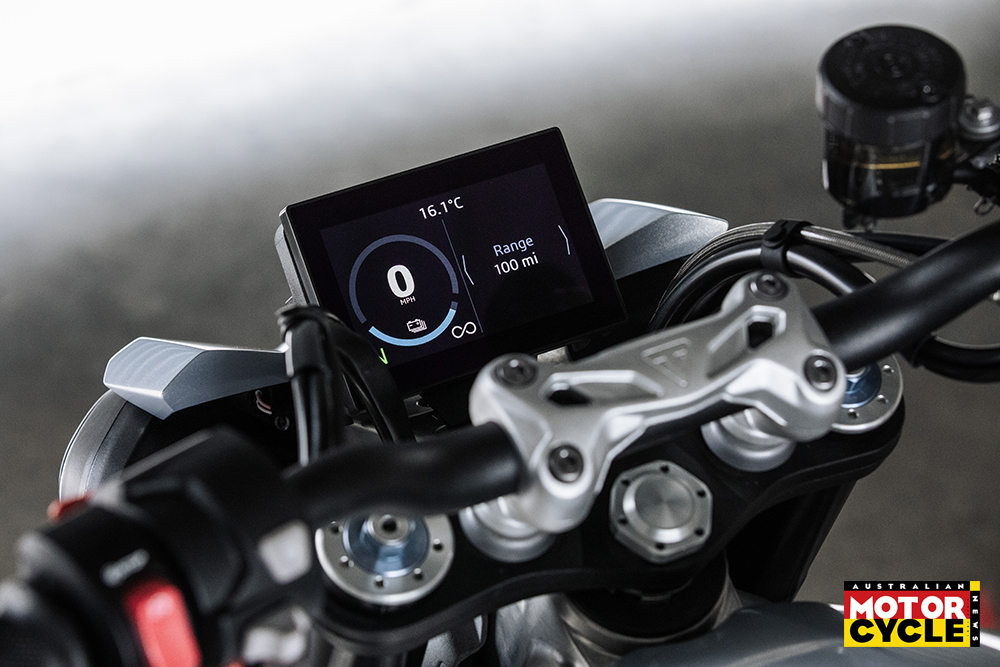 Triumph emphasised that track performance had exceeded expectations. A lot of this was due to the effort put into shaping and locating the heavy battery pack. It has 900 cells arranged in eight modules to fit the aluminium chassis while getting weight distribution spot-on.

AMCN asked if the TE-1 had been ridden on the road and the answer was that it had been tested in “real world conditions” at Milbrook, a sprawling UK automotive proving ground.

The TE-1 is a UK collaboration that has involved funding from the British Government’s innovation agency, Innovate UK, and technical input from Williams Advanced Engineering (an F1 company), Integral Powertrain and WMG at Warwick University (also now involved with Norton’s electric program). 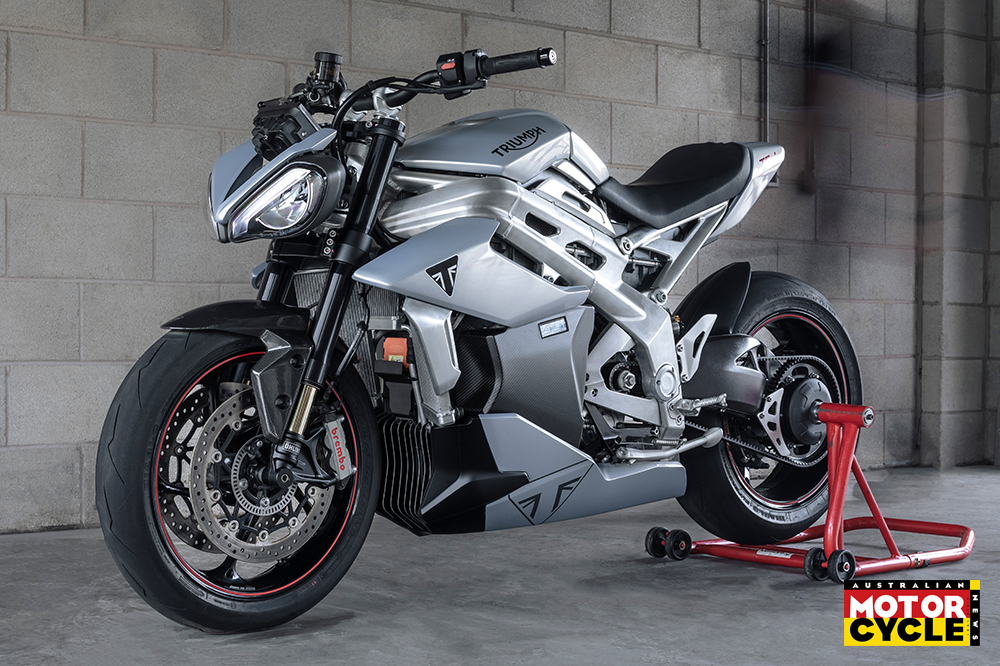 The bottom line is it’s a production-ready prototype, whatever Triumph say. AMCN expects public demand for the TE-1 will bring it into production. 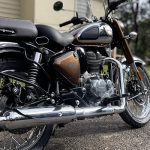 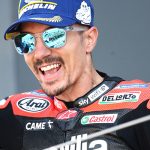