Michael had grown up watching Merkel and Honda teammate Wayne Rainey racing in the ’80s, so he’d always harboured the dream to own a replica of their AMA bikes. It quickly became apparent that Michael wasn’t interested in something offering a mere passing resemblance to Fred’s RC24 racer. He wanted the real deal, built from a vast inventory of genuine HRC parts he’d accumulated from around the world – a bike so close in specification to Flyin’ Fred’s own that it could have lined up on an AMA grid back in ’86 with the wiry-haired Californian at the controls. 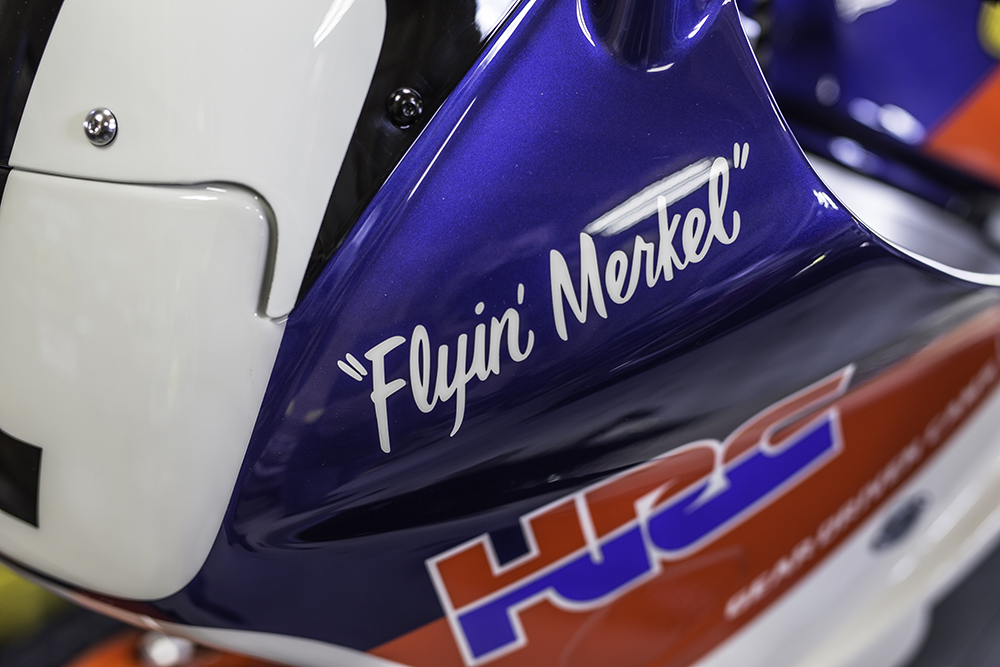 “Michael said that he’d sourced numerous rare HRC parts, including a motor, carbs, and full stainless exhaust system, and asked if I’d build the bike for him,” explains Begg, whose DB Customs business is based in Canada.

“That, and the fact he’d been impressed by a CB750F superbike that I’d built, really piqued my interest in this project – I’m a big fan of anything Honda RSC/HRC related; it was such an epic time in superbike racing when the programmes and technologies were evolving at such a rapid pace.

The original brief was to build a replica of either Merkel’s or Rainey’s 1986 VFR, but that plan soon evolved when Michael revealed just how many HRC parts he’d amassed. 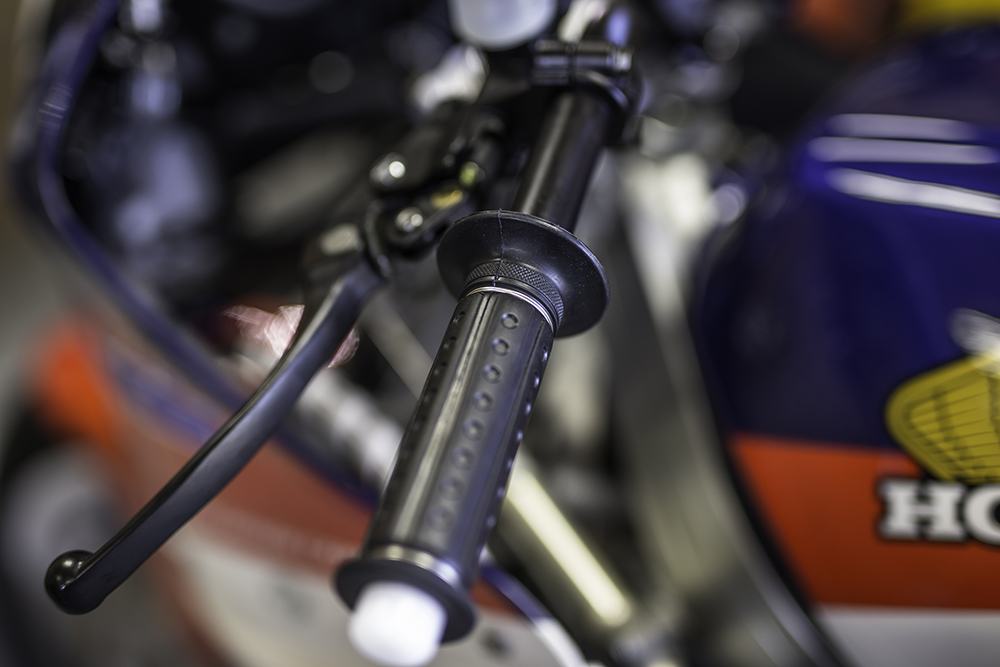 “So that’s what we did, although the Rainey bike ended up being finished in the States by a friend of Michael’s due to customs restrictions around how long it could remain in Canada.”

The whole project snowballed out of Michael’s curiosity to see if any pukka RC24 race parts were still out there. 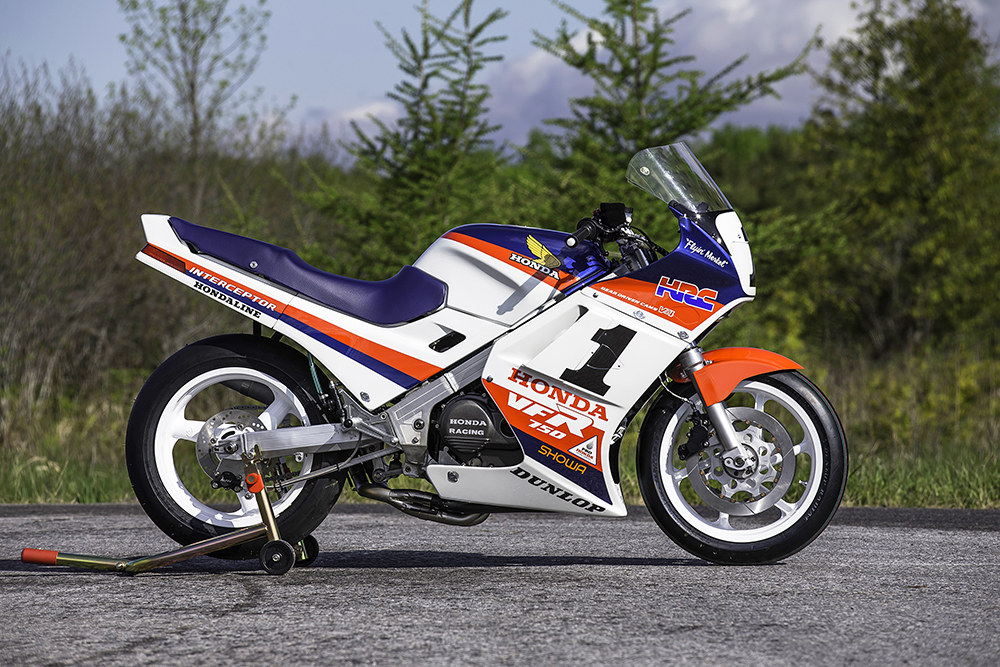 “The search started with just one part,” he says. “I found an old listing for Keihin RVD roundslide carbs on eBay. I sent an email and got a reply saying that they’d not sold and were still available from Dennis Zickrick [Ed: the former RSC/HRC technician for AMA Honda who would later build the engine for this very bike ]. We chatted over the phone and the search began for more HRC parts.”

Back in ’86, Honda America’s VFRs were the most advanced production-based V4s on the planet. The RC30 was two years away, so the only four-stroke Hondas more exotic were the full-factory RVF750 TT-F1 bikes. At that time Fred and teammate Rainey’s bikes were a rapidly evolving blend of street bike and full-factory racer. 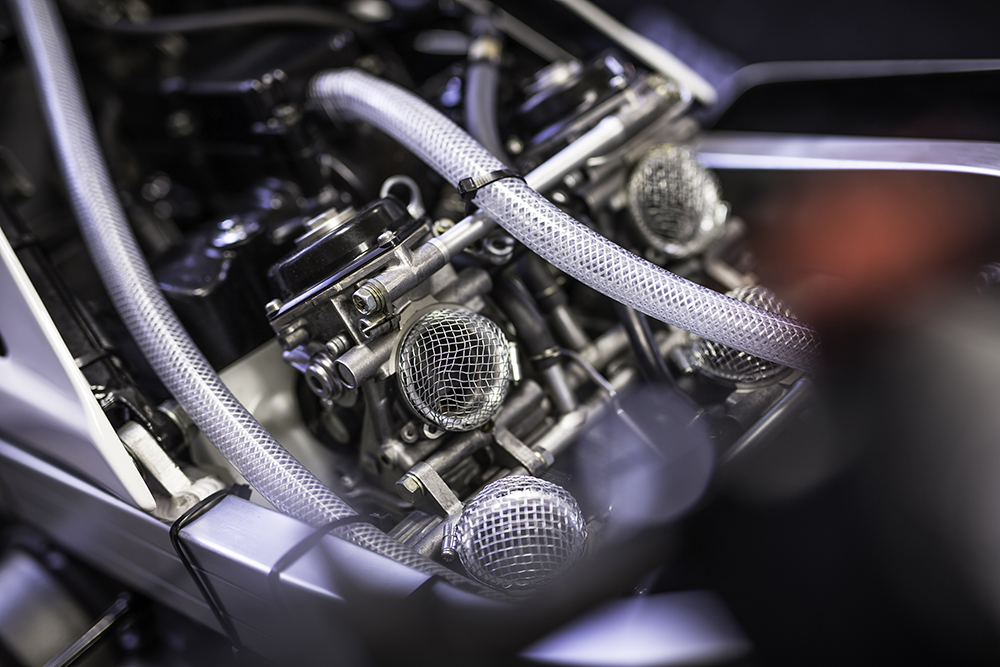 The motors were pure HRC – second generation RVF750 spec with a 360-degree firing order in place of the roadbike’s 180-degree set-up, roller-bearing cams and titanium Keihin flatslides that cost US$22,000 (AUD$28,500) a set. The only difference in between these AMA engines and full RVF spec was a lack of titanium rods in order to fall in line with American rules.

These works VFRs (known as NW6A) became a test bed for technology that would eventually surface in the VFR750R. 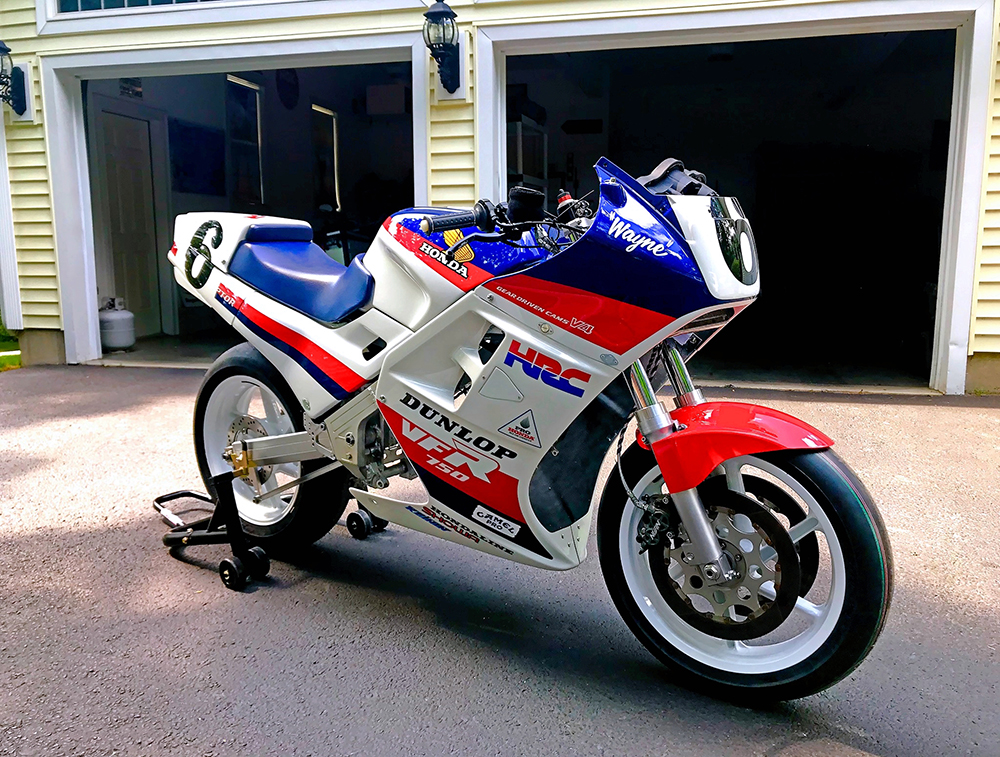 “The motor in Michael’s bike has genuine race pedigree,” says Darren. “It’s an ex-Dr David Kieffer engine. He raced in AMA under number 91, although sadly he passed away in 2002.

“The motor was rebuilt by Dennis Zickrick and Ray Farrow, both former RSC/HRC technicians with the works AMA team. It runs a full HRC customer kit, including pistons, cams, rods, titanium valves, retainers, ported head and straight-cut primary gears plus a lightened and balanced crank but, being an ‘NF1’ kit motor rather than a full-factory spec NW6A, the crank is a 180-degree unit rather than the flat-sounding 360-degree type. Interestingly, Michael’s Rainey replica now runs a genuine NW6A motor that he managed to get hold of.” 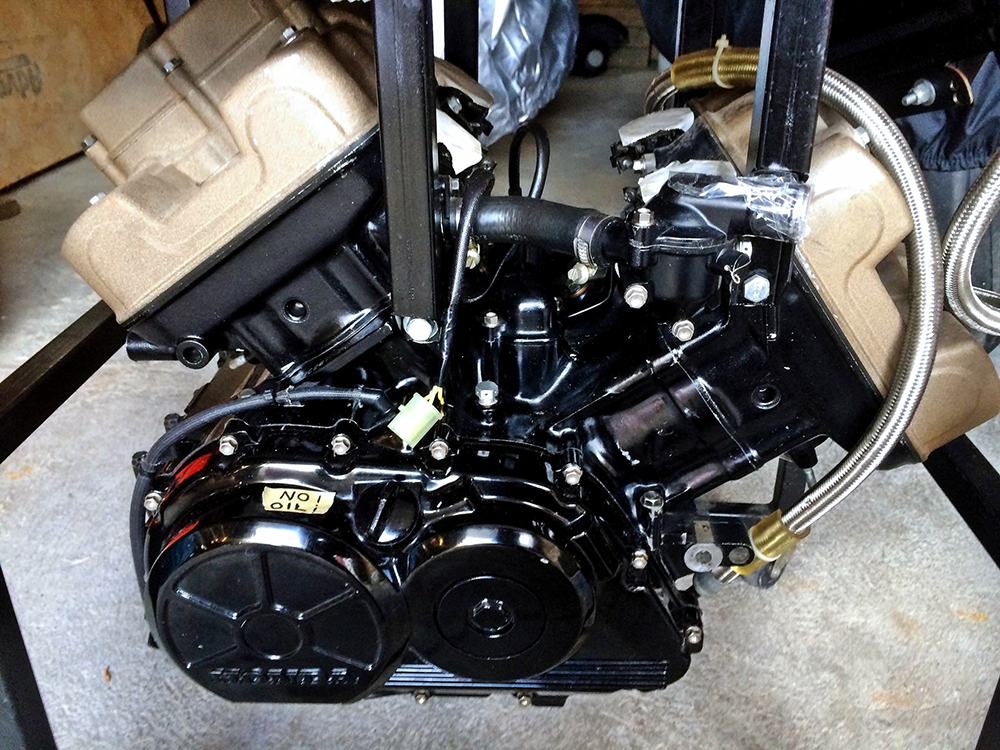 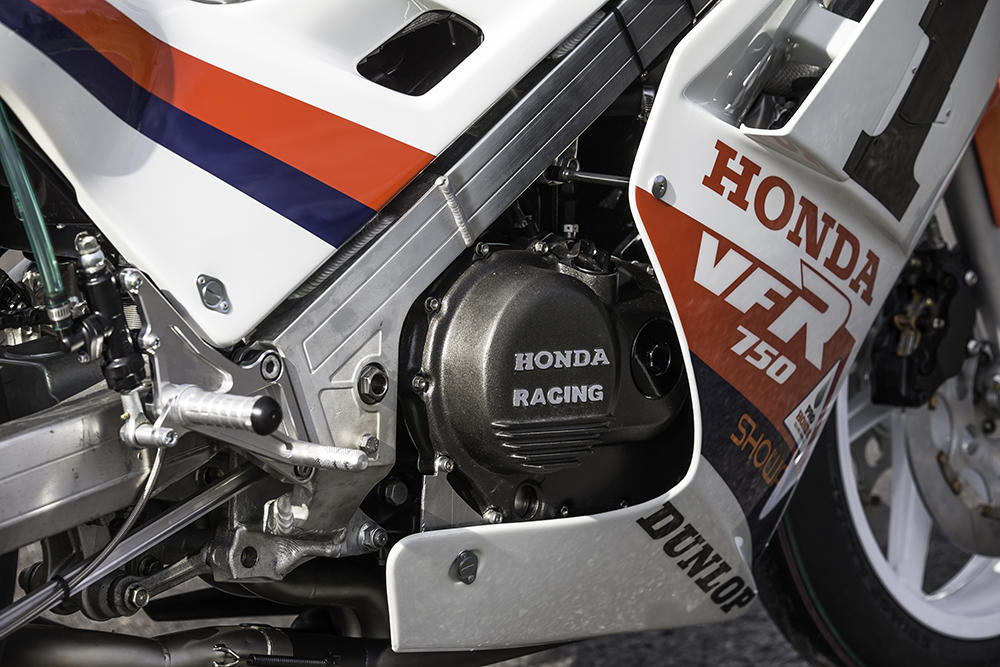 Michael scoured the world for the right parts. The majority came from US-based superbike collector Brian O’Shea who bought up Honda America’s full inventory of unused RSC/HRC racing parts. We’re talking everything from Spencer-era CB750F parts through to VF750F, RC24 and RC30 parts – literally pallets of the stuff, so Brian was able to assist with many impossibly rare parts that no longer exist anywhere else on the planet.

As such, Darren was able to complement the motor with ancillaries worthy of its full-kit spec. Fuelling is taken care of by the bank of exotic Keihin HRC RVD roundslide carbs that started the whole project – try ordering a set of those through your local Honda dealer… The wiring harness and analogue ignition with 12,500rpm limiter are also HRC parts, as is the serpentine-esque left-exiting exhaust system. 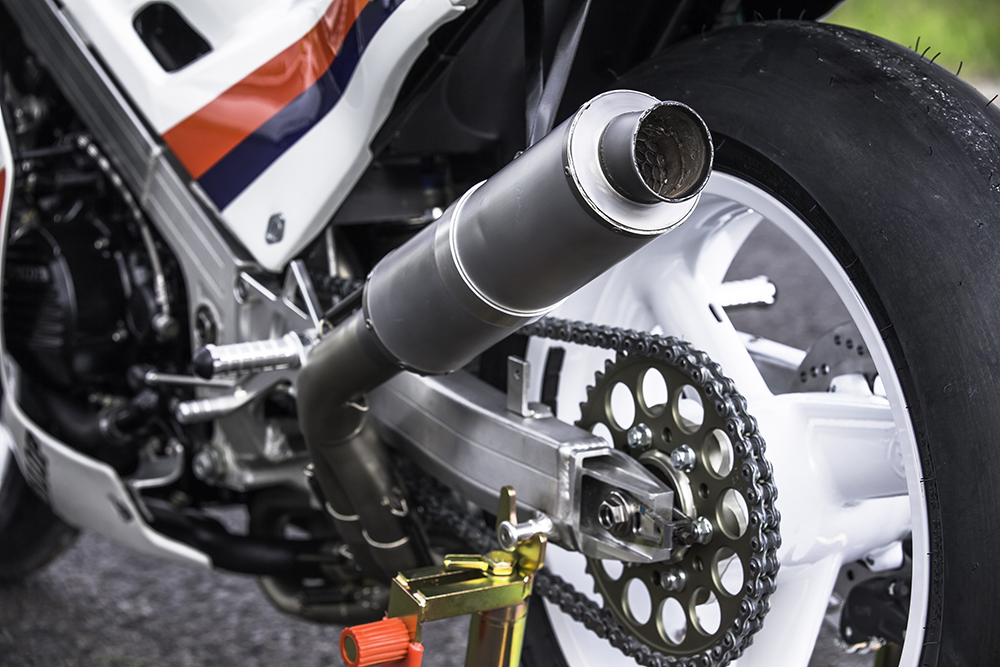 “The exhaust is a stainless-steel system that’s seen action previously. It was in pretty rough shape when it arrived,” says Darren. “I had to refinish it in my vapour-blasting cabinet to transform it back to its former glory.

The finish isn’t perfect, but then again it’s a used part and it shouldn’t have to be as-new condition on what is a racebike – none of them are ever perfect, works machine or not.” 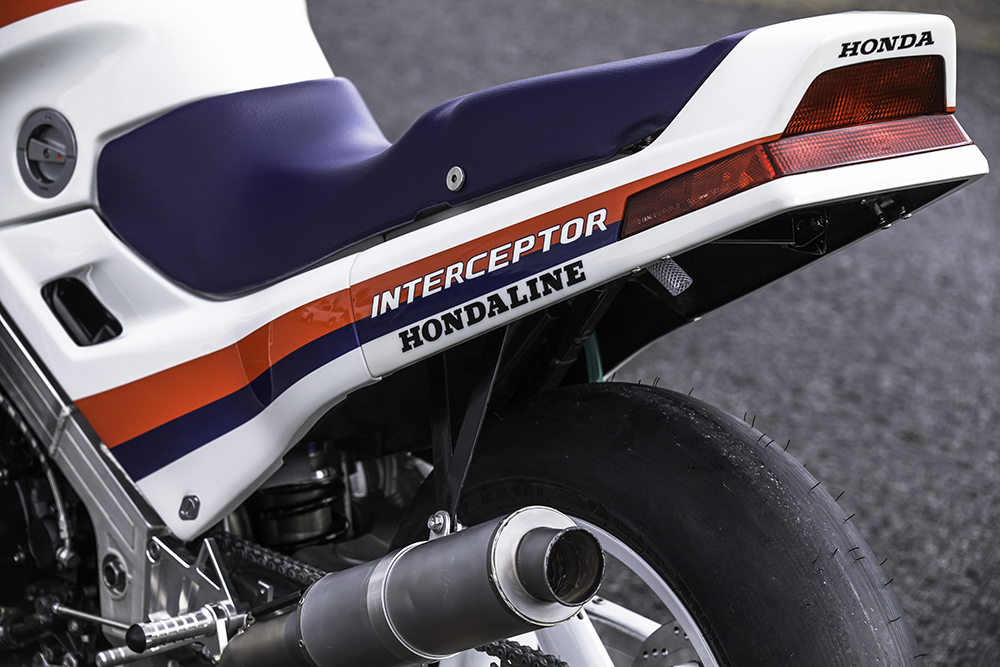 Michael’s desire for his bikes to stay as close in specification to Fred and Wayne’s was so strong that he not only sourced genuine parts for the build, he also supplied Darren with HRC factory manuals for both the NF1 kit and NW6A machines, as well as all the supporting schematics, diagrams and part numbers.

“Having a pile of factory parts is all well and good, but it was the extra info supplied by Michael that helped pull it all together. Brian was also able to fill in the blanks by providing detailed pictures of the many modifications the Honda mechanics made to the bikes’ engines, chassis and suspension parts throughout the seasons. 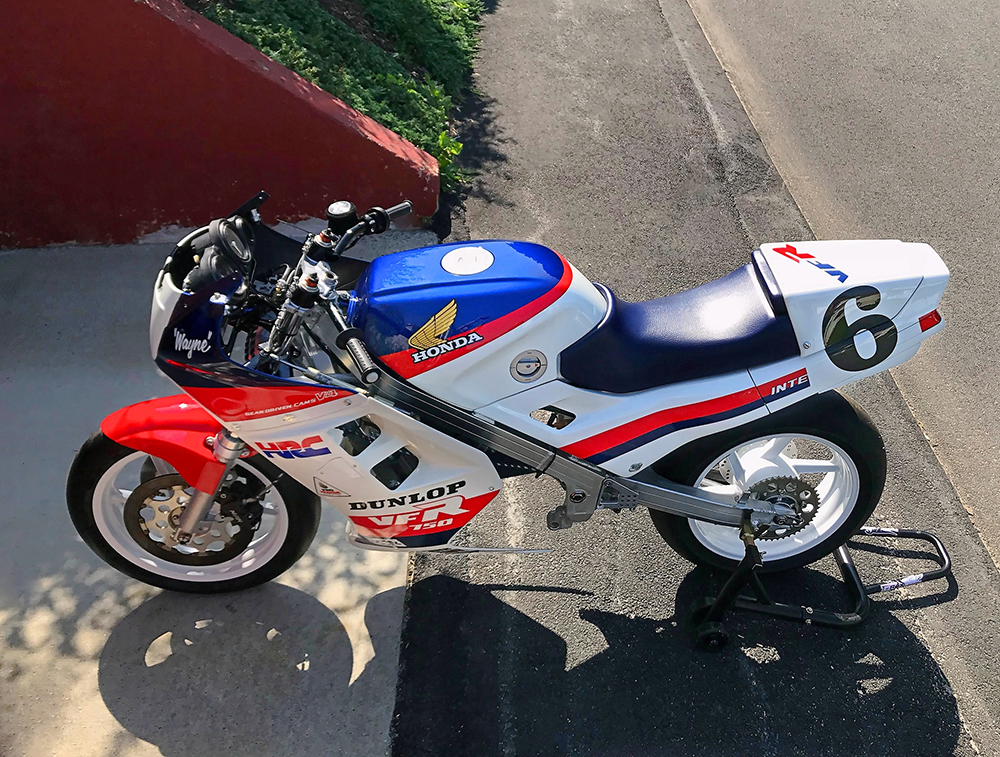 “A number of components were fabricated from drawings, including reproductions of the lower fairing mounts, exhaust hanger, swingarm spools, battery box, and a frame modification for the rear brake forward stay mount. The bodywork was sourced from Japan.”

The wonders of modern technology and production techniques helped, too. Brian was able to supply genuine HRC triple clamps, rear brake torque arm and super-trick front fender mounting brackets (you wouldn’t expect anything less on a factory Honda…), all of which were recreated on a 3D printer then fitted to the bike to ensure accuracy before being made proper in billet. 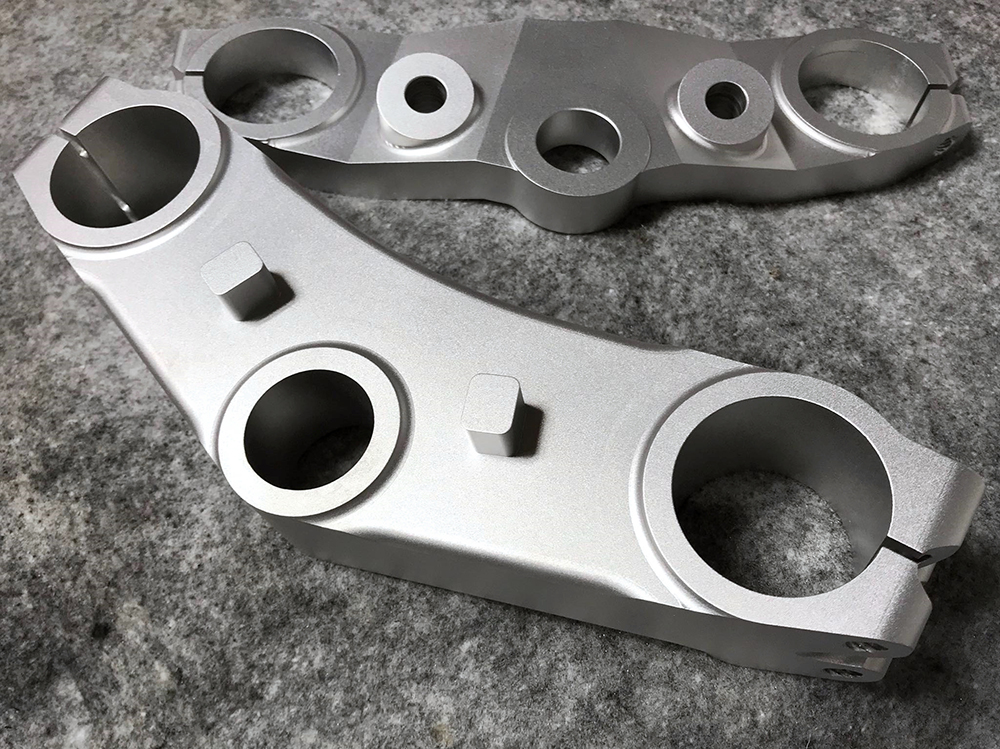 The lengths Michael and Darren have gone to create a match for Fred’s chassis are extraordinary. Up front a set of RC30 forks – treated with Cerakote to mimic the Kal-Gard finish on Fred’s bike – with HRC kit internals keep the six-spoke HRC magnesium wheel in check. Fred, Wayne and Bubba Shobert’s bikes ran magnesium Showa forks, so RC parts are as close a match as was possible. The three-spoke Marvic rear wheel exactly mimics that of Merkel’s own bike, and was custom made to the same dimensions. Rainey’s bike later used a multi-spoke RS500 wheel.

The discs, steering damper and swingarm (note its chamfered underside compared to the simple box-section shape on the roadbike) are all HRC parts; calipers are RC30. Rear damping is taken care of by a US-made Fox shock, as per Fred’s own machine. 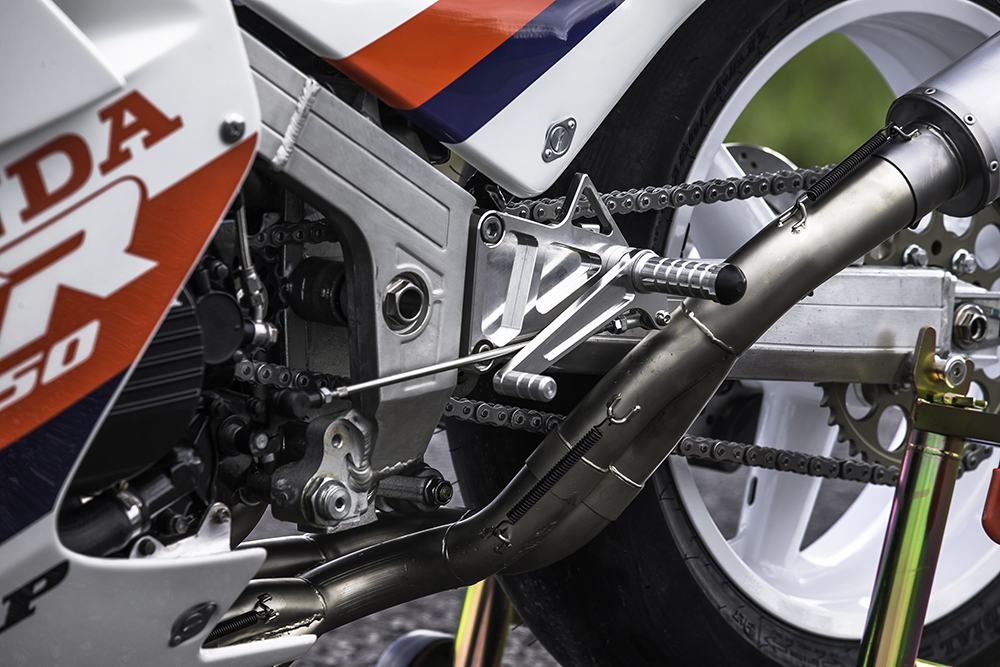 Race bikes rarely end a season mirroring the specification in which they started, particularly those campaigned back in the 1980s when the pace of development was white hot. Honda USA’s VFRs were no exception.

“Michael supplied lots of pictures for me to reference,” says Darren. “And you can see how the bikes evolved as the season went on, and how they were adapted to suit certain tracks – things like different exhaust systems, some with a right-side silencer, some on the left. We decided to build this bike as close to the spec when Fred last rode it at the end of the 1986 season.” 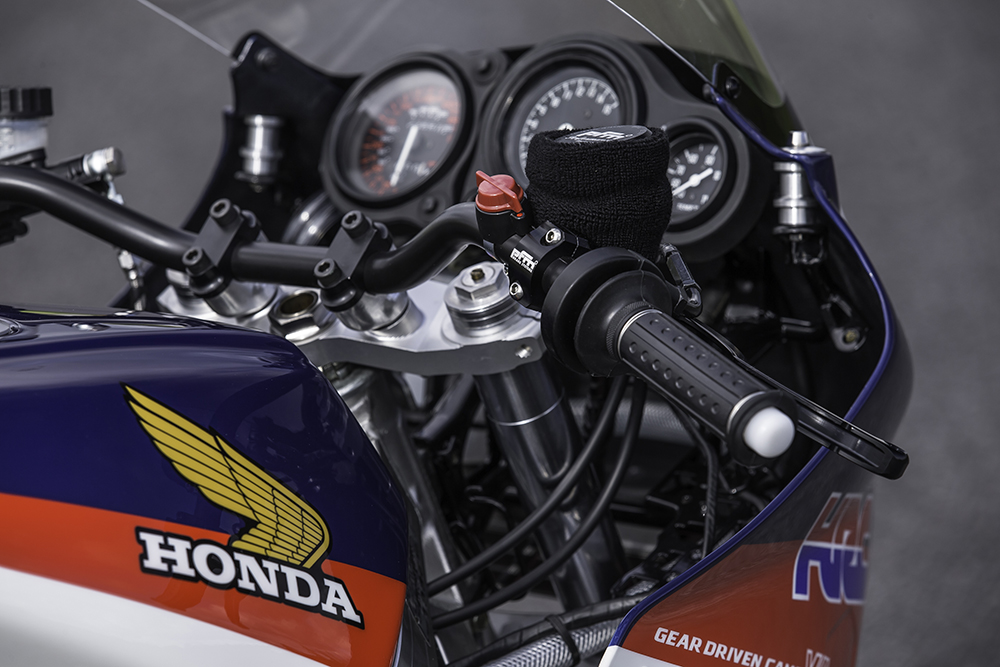 Despite all the information supplied, reference pictures, factory parts and outside knowledge to hand, building the VFR was by no means easy, says Darren.

“I’ve built a lot of bikes, yet in terms of time spent communicating with the client and going over details this was the most involved. There was a huge expectation to get this right, many eyes would be on it, and so it was quite stressful since I expect a lot from myself to deliver the perfect product.” 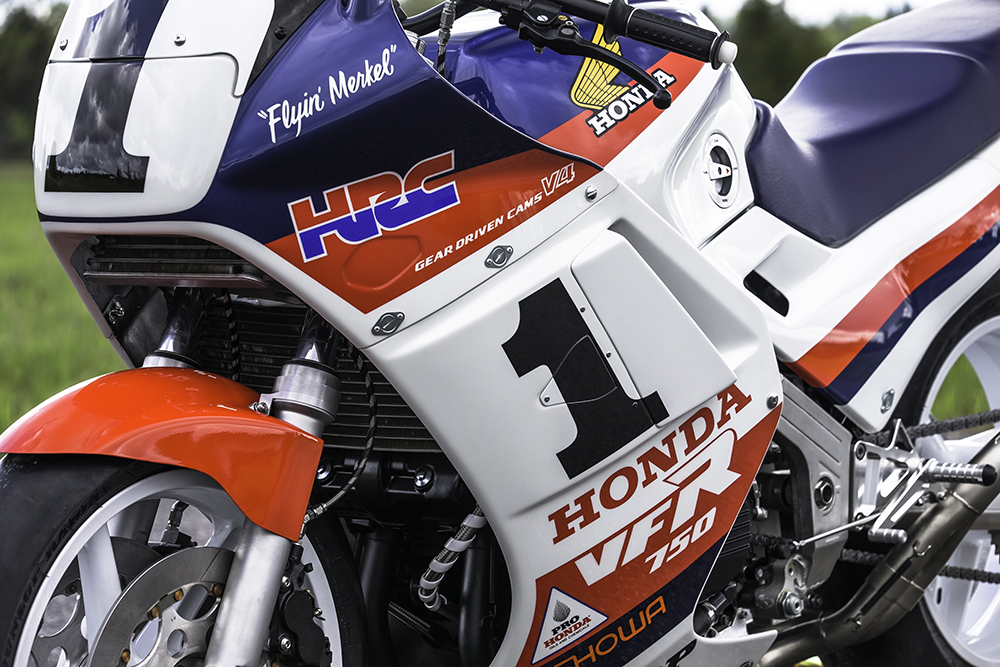 Surprisingly, perhaps, Darren considers getting the paint and graphics correct to have been the hardest part of the whole project.

“Getting the colour sections as close to a perfect match for the original Honda scheme – plus all the sponsor logos, noting that all these are paint not decals – was by far the most challenging aspect of the build. Even the ‘Flyin’ Merkel’ signature was replicated in paint, all by our partners at Sketchs Ink in Ottawa. This was a key part of the build for Michael as it would be the main thing other enthusiasts might pick apart and critique. For me, it’s as close as it’s going to get.” 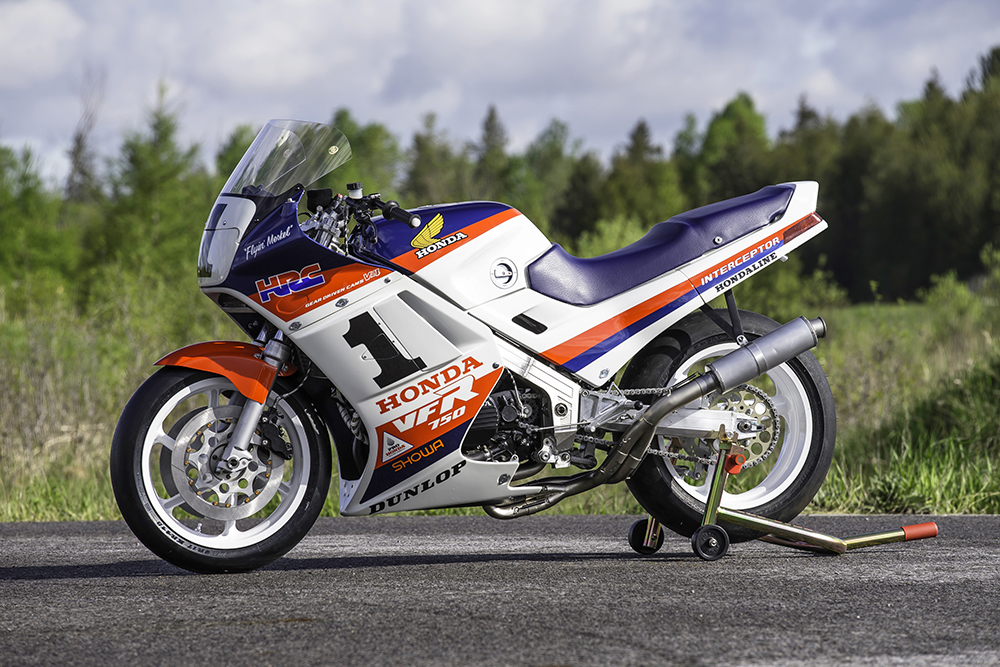 Now it’s finished, even hawk-eyed AMA fanatics will struggle to tell this RC24 apart from the real thing. Every possible detail has been researched, thought through and executed with aplomb, right down to the distinctive HRC tacho and temp gauge binnacle, cow horn ’bars, and lock-wired handlebar grips.

In all, it’s a build of epic scale. Flyin’ Fred would be proud.