THE SUMMER OF HIGHSIDES: THE YEAR THAT MADE RAINEY AND DOOHAN | LOOKING BACK

The 1990 world championship ushered in the Rainey/Doohan era, just as the 500s seemed on the verge of collapse, with talk of replacing them with four-strokes 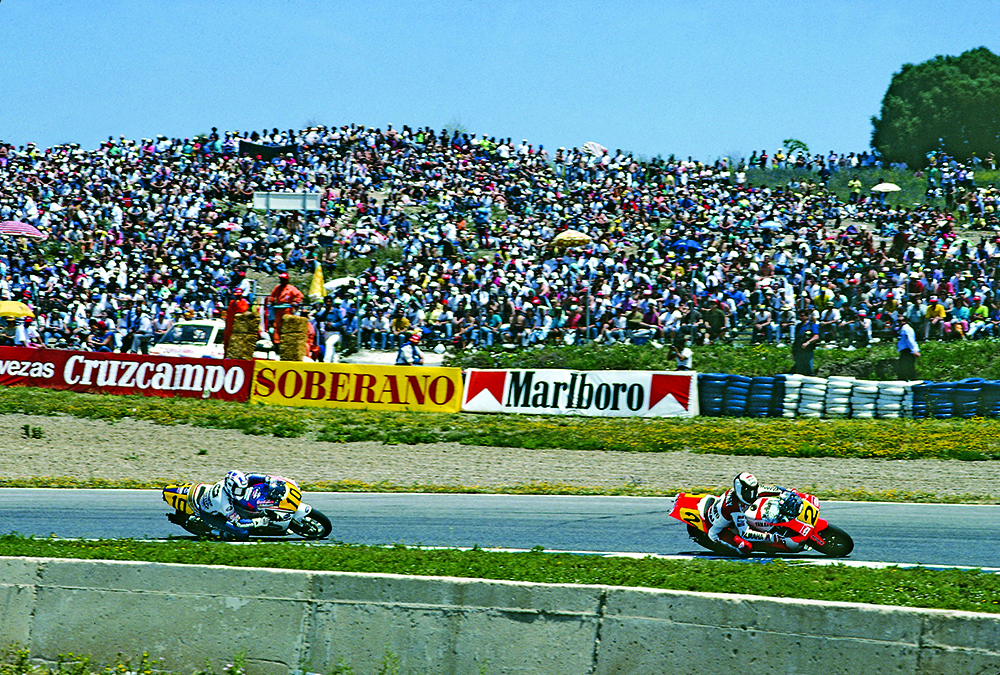 The action at the front – Rainey, Schwantz, Doohan and Wayne Gardner – was thrilling but while the 500 superheroes went about their business, the 500cc class came closer than ever to extinction. The 1990 season was the summer of the highside, a perfect storm created by precipitous power curves and tricky tyres, which kept the Clinica Mobile busier than ever. 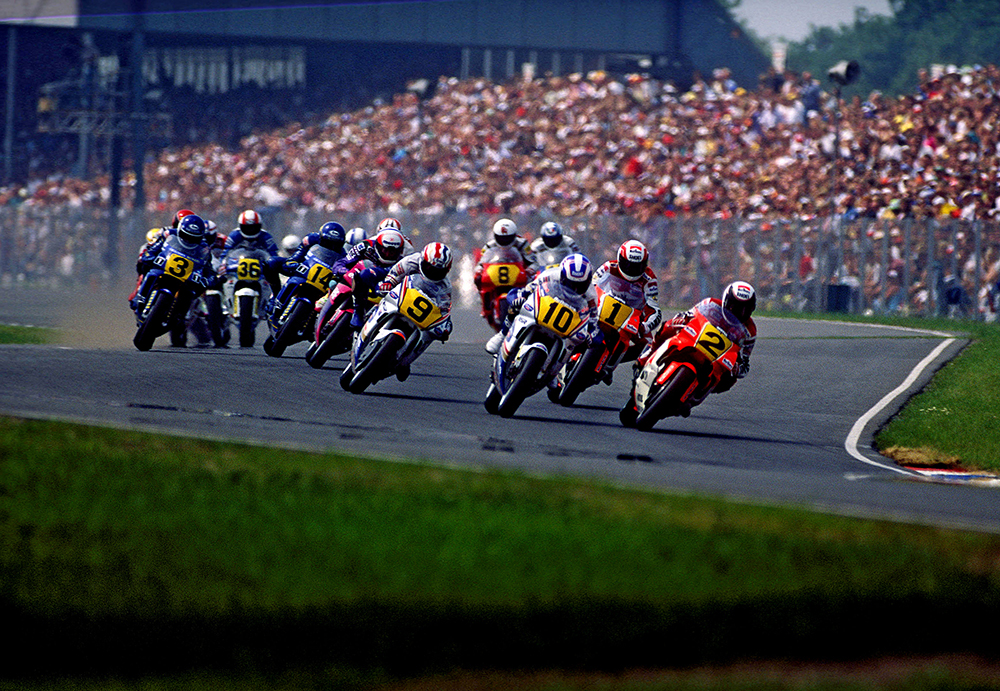 Rainey, Gardner and Eddie Lawson fight it out at Assen

Injured riders depleted what was already a half-empty grid: just 10 finishers at Laguna Seca, where the last man home was lapped three times by winner Rainey, and only nine finishers at Rijeka, where the last finisher took the flag four laps down. No wonder there were demands from on high that the 500s be axed in favour of something safer and cheaper, like TT F1 bikes or superbikes. 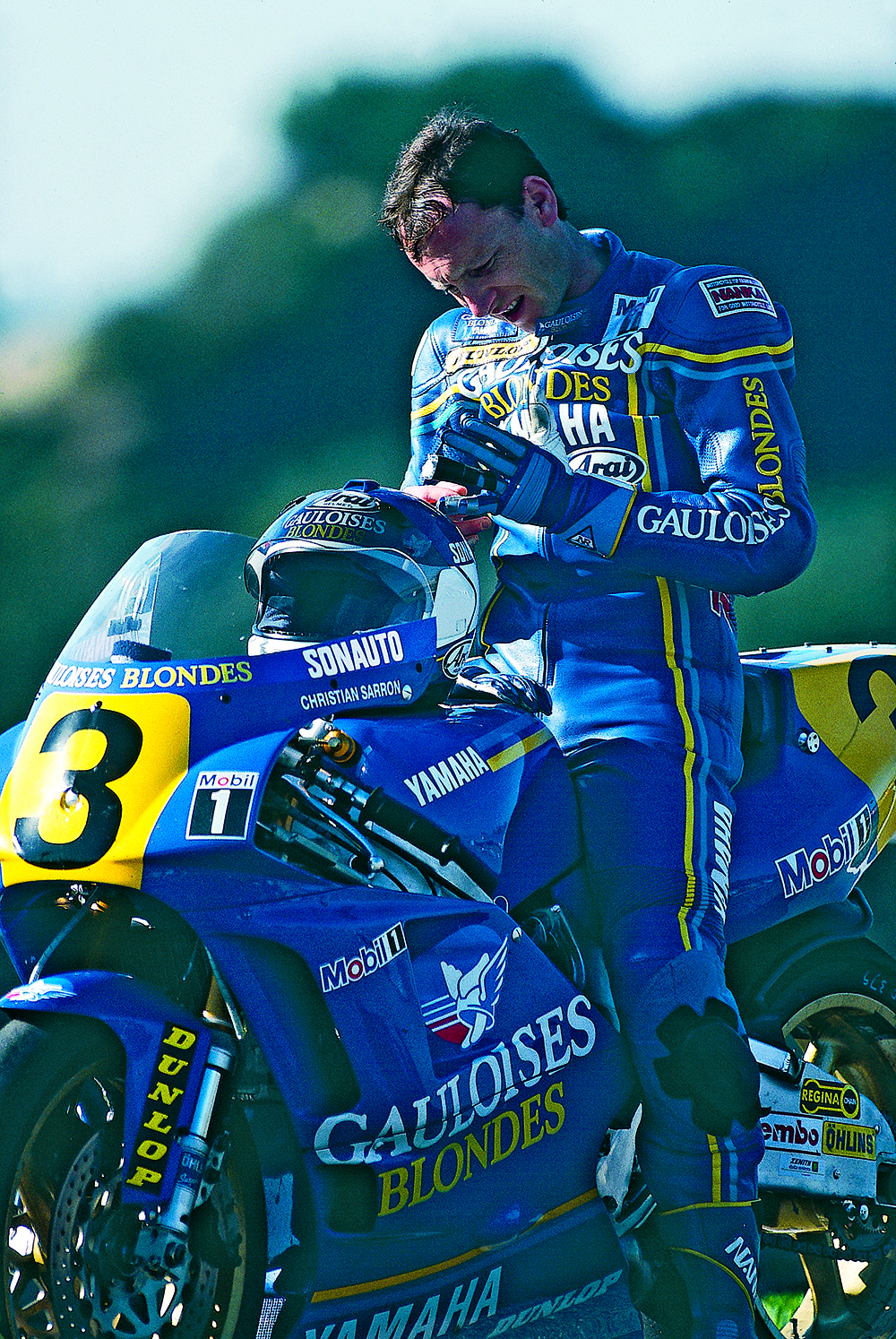 Christian Sarron was ninth in the points

The season started with a fiscal changing of the guard: ‘King’ Kenny snatched the Marlboro millions from factory Yamaha team boss Giacomo Agostini, whose association with Marlboro went back to the mid-1970s when Ago was the first motorcycle racer to carry tobacco branding. The deal also made Team Roberts Yamaha’s number one squad, while Agostini quit racing, leaving the paddock that had been home since the early 1960s. 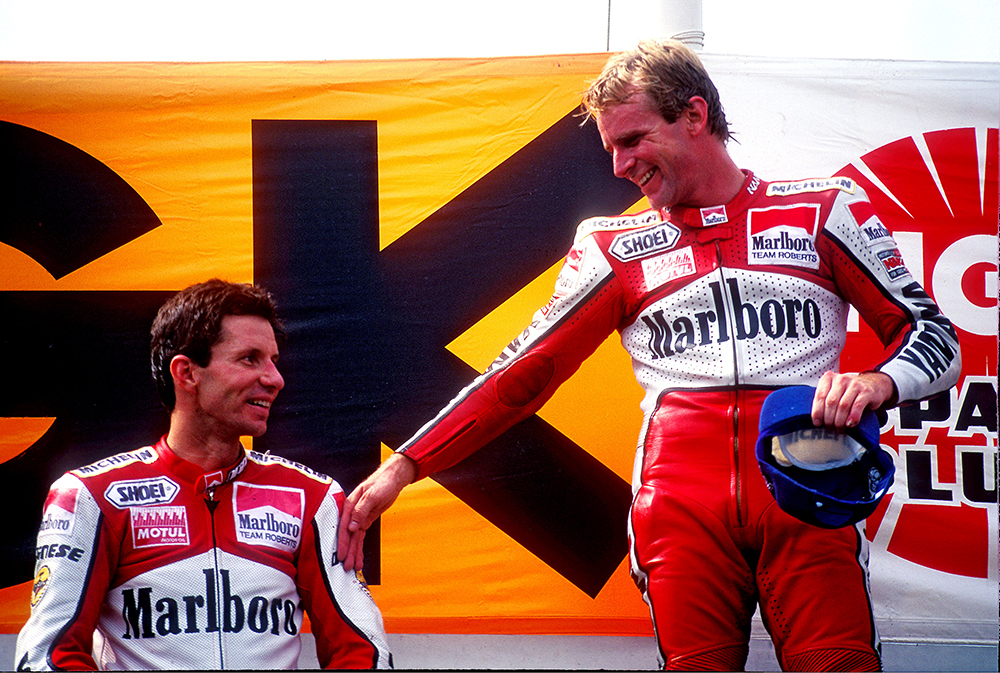 Ago had made desperate attempts to keep Roberts’ hands off the Marlboro money, the richest budget in bike racing. He offered Rainey$3 million to leave Roberts and join his team for 1990, doubling the grid’s biggest salary at a stroke.

“Ago has got more money than sense,” said Roberts. 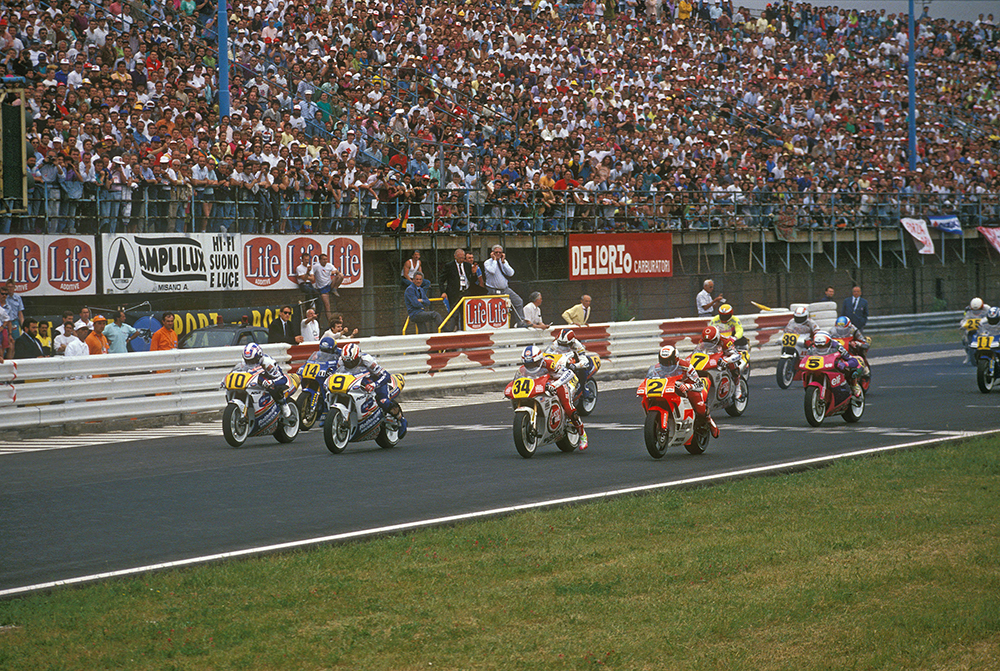 There was a huge crowd at Misano

Rainey and Roberts were a double act, there was no way Rainey was leaving. Once ‘King’ Kenny got his hands on the Marlboro moolah, he put Rainey and Lawson on 500s and John Kocinski on 250s, with the best technical back-up ever seen. It did not take long for the jealous rivals came up with the ‘Evil Empire’ moniker. 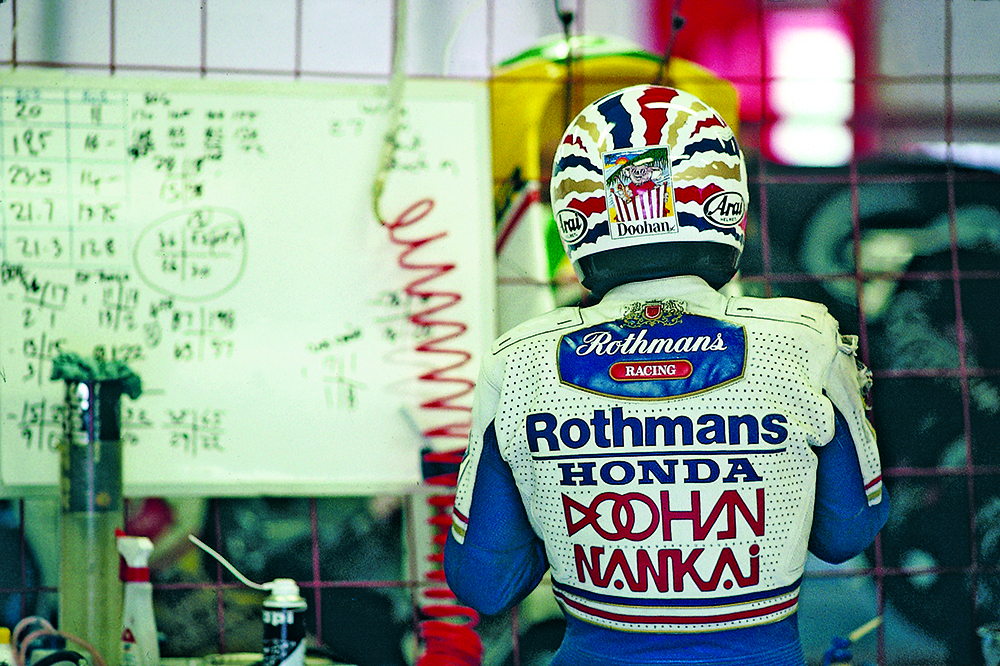 No one was surprised when Rainey ran away with the first two GPs at Suzuka and Laguna, because he hadn’t only swapped Lucky Strike money for Marlboro, he had swapped the team’s Dunlop tyres for Michelins.

“I still haven’t got used to all the drive I can get out of turns,” Rainey said after those victories. “And with the tyres gripping better, they’re putting more pressure on the suspension, so I’m still figuring out how to set up the bike.” Ominous talk! 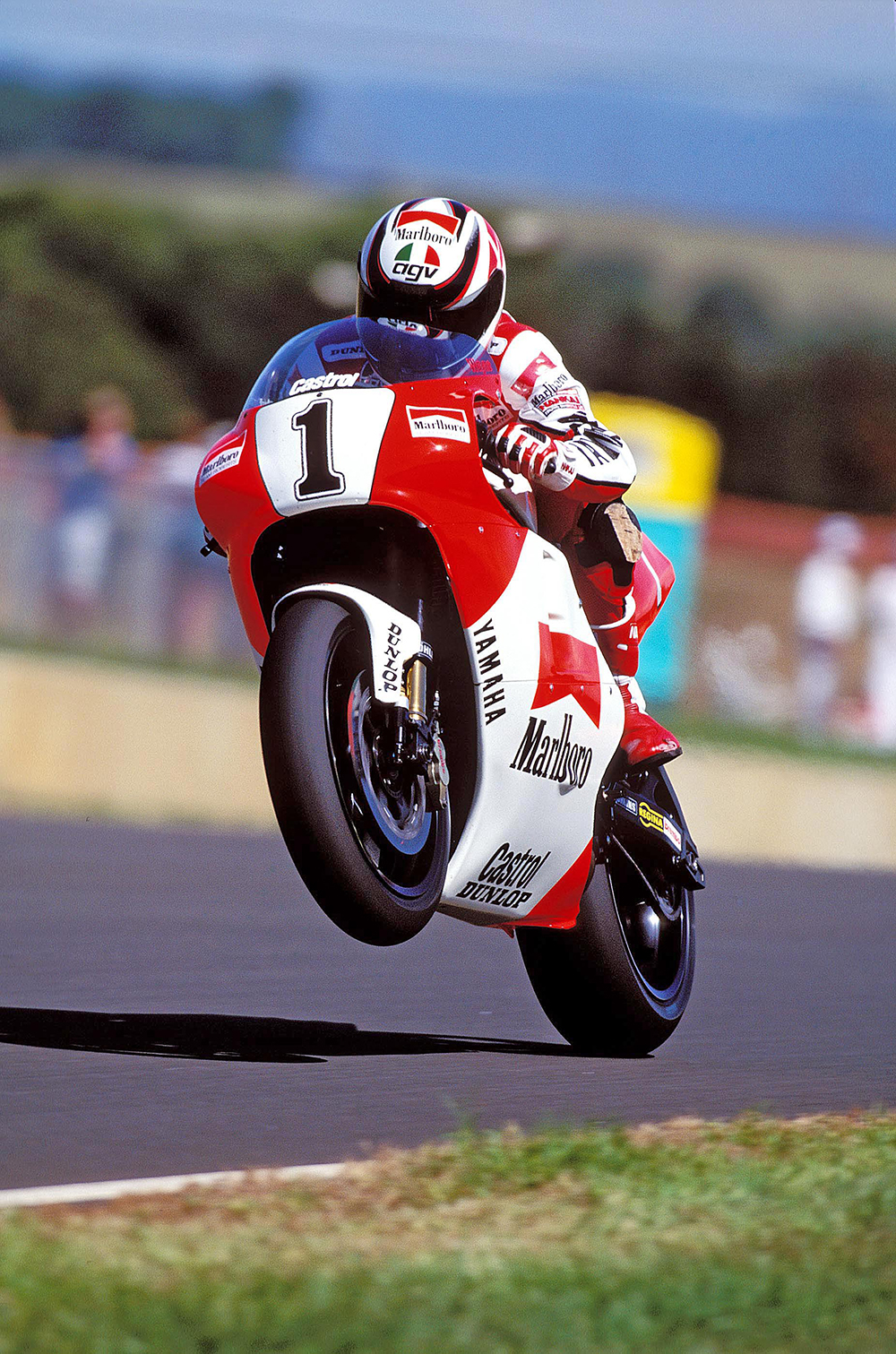 This was Rainey’s and arch-rival Schwantz’s third GP season. Like Rainey, much was expected of Schwantz, who had had a stellar 1989, thanks to Suzuki getting a lot more power out of the RGV500 by copying the Yamaha YZR500’s contra-rotating crankshaft configuration. Schwantz won six races in 1989 and would’ve challenged for the title if the RGV hadn’t broken in three, because its engine internals weren’t up to the power increase. 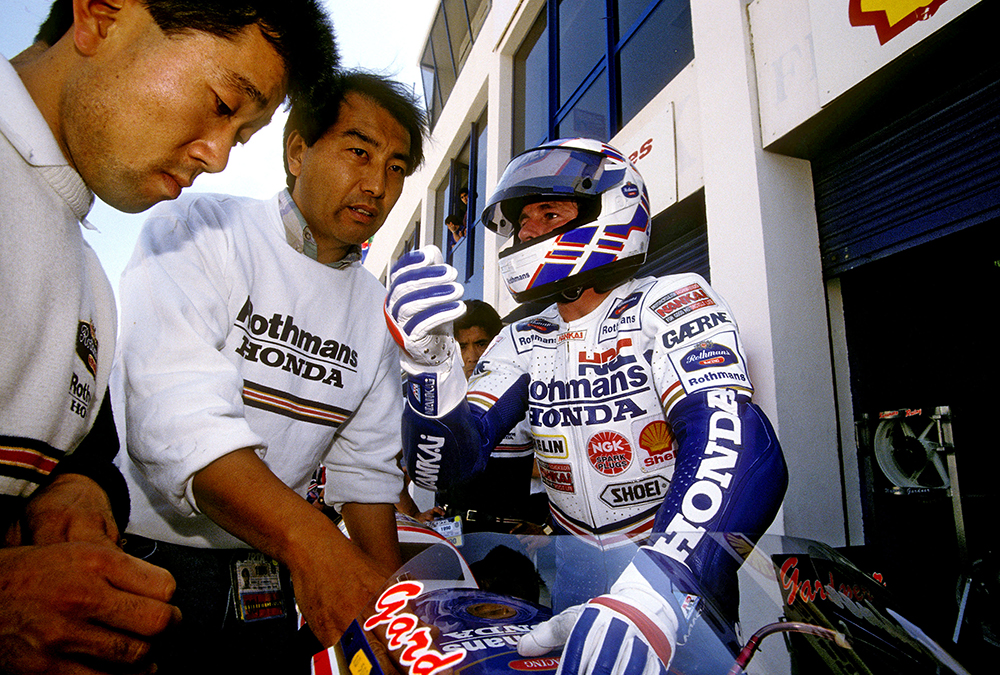 No doubt, Schwantz was going to be a contender in 1990… but didn’t help his cause by crashing and breaking a wrist while chasing Rainey at Laguna. The Texan came back strongly a few weeks later, with five victories from seven races in the middle of the season, despite issues with the 1990 RGV. 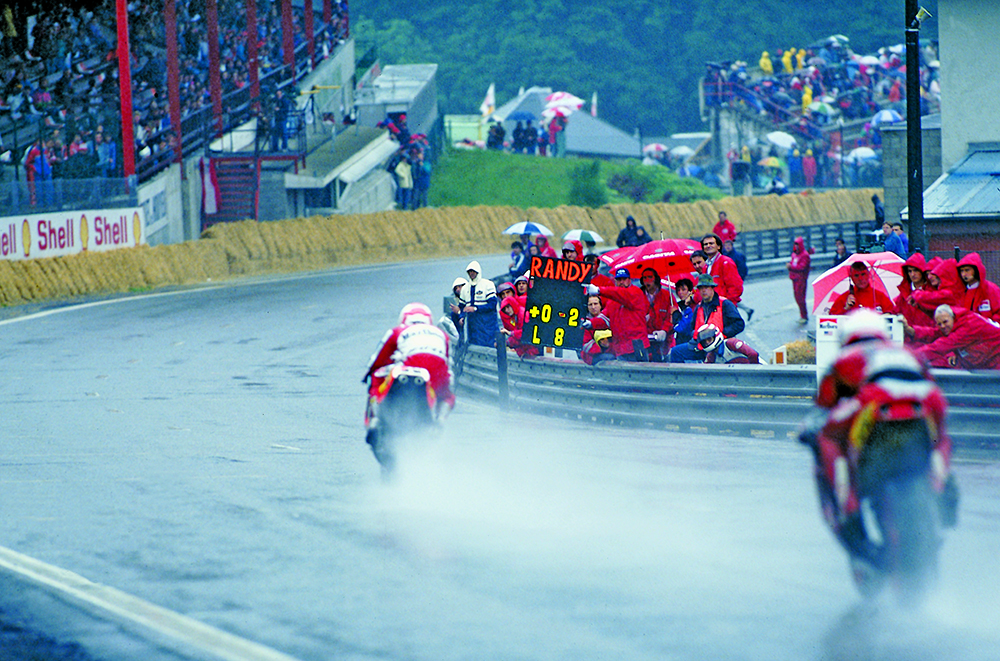 “It took longer than we wanted to get the bike working well,” he said. “Once we did that we could work on putting some pressure on Wayne. By keeping ahead of him in every practice session I reckon we could unsettle him into making a mistake.”

By the time they arrived in Sweden for round 12 of 15, Schwantz had closed the gap to 27 points. If he could beat Rainey at the last four races he might win the title. Instead he crashed out at Anderstorp and again at Brno, handing the crown to his countryman. 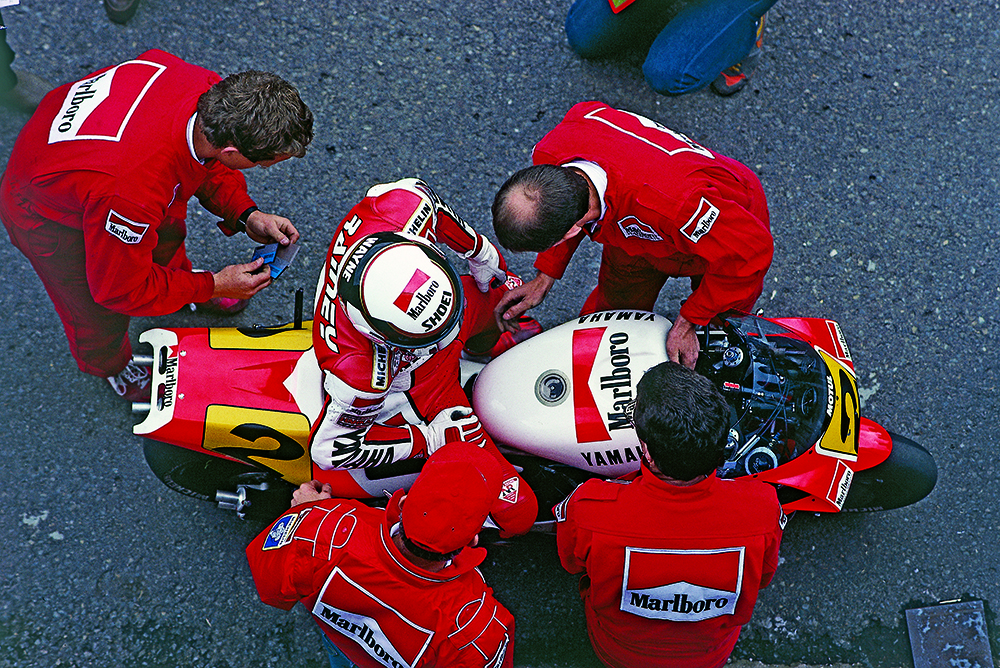 The Roberts team was among the first to use data logging

Schwantz always admitted that he didn’t have a very technical mind, so he was unable to give the quality of feedback that Rainey gave his engineers.

“I don’t know why the bike is working here,” he said after beating Rainey by 11 seconds at the Nürburgring. “It would be scary if I did!” 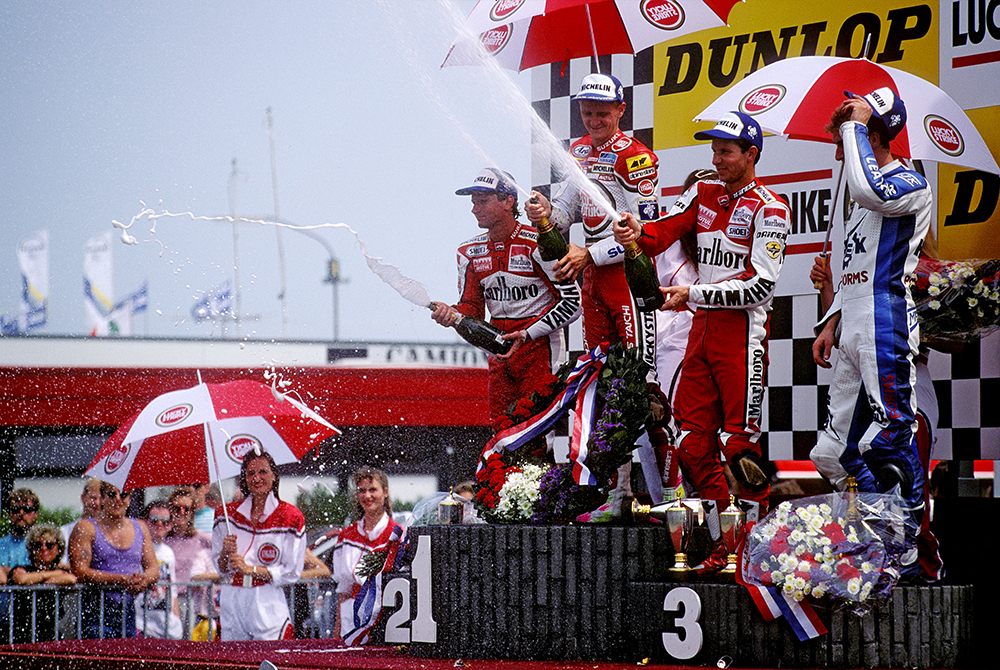 Team Roberts was unique in 500 GPs for pushing forward with all kinds of new technology, from datalogging to chassis software and from carbon brakes to upside-down forks. The YZR500 may not have been the best bike on the grid, but Roberts and his engineers made it the best bike to win the championship.

Honda was never in the title hunt in 1990. It won the 1989 title thanks to Lawson and pricelessly talented engineer Erv Kanemoto, but Lawson went back to Yamaha with the number-one plate. 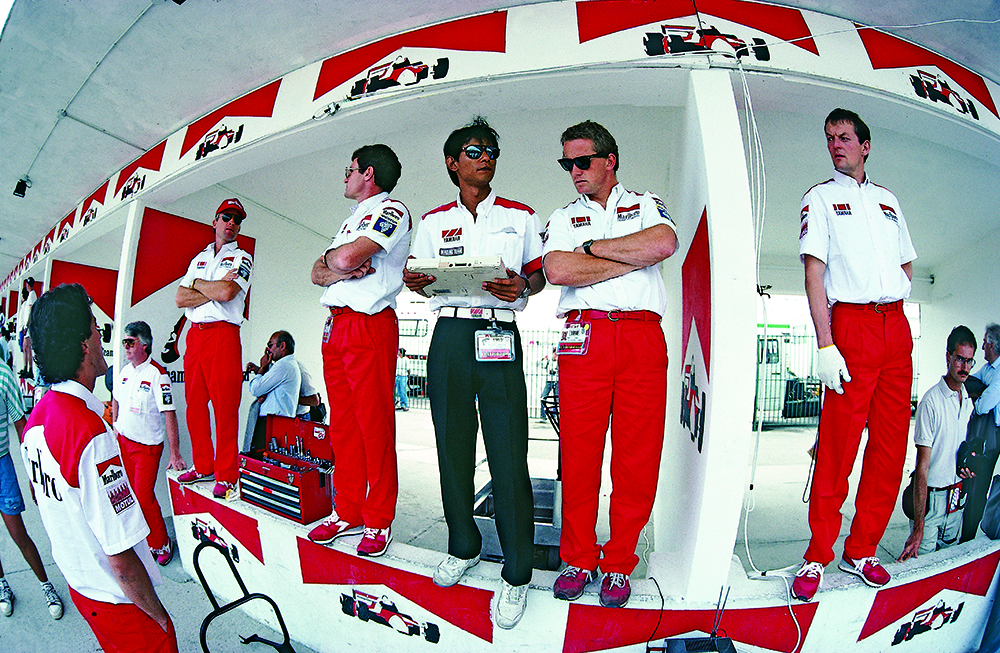 “Honda and me just couldn’t come to terms,” said the four-times 500 king. “Their offer was far below what the other teams had offered, plus they wanted me to do four-stroke testing, the Suzuka 8 Hours and this and that and the other. I had Suzuki and Marlboro offering me far, far more. So, shoot, if you’re not wanted, it’s time to go.”

Lawson’s 1990 went AWOL when his brakes failed at over 250km/h during practice for the US GP. 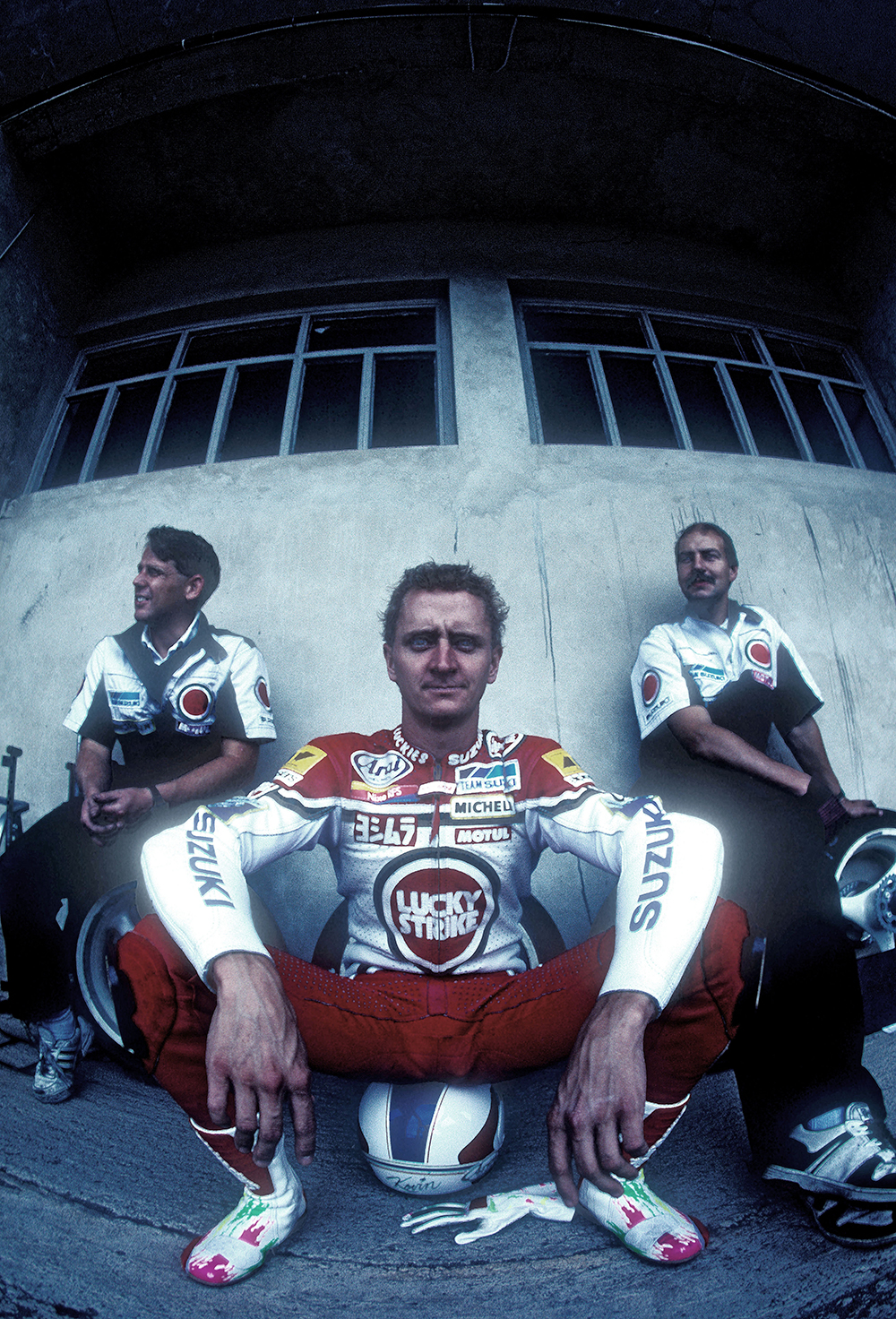 “I came over the hill and the brakes failed, then I forgot whether the track goes left or right and then this nun ran out in front of me,” Lawson joked.  The injuries sustained that day kept him home until midseason.

Honda continued with its 1987 champ Gardner and Doohan, who was still learning his way in his second season of 500cc bikes. The factory had learned plenty from Lawson and began the process of turning the NSR500 into the motorcycle that would dominate the 500 class for its final decade. 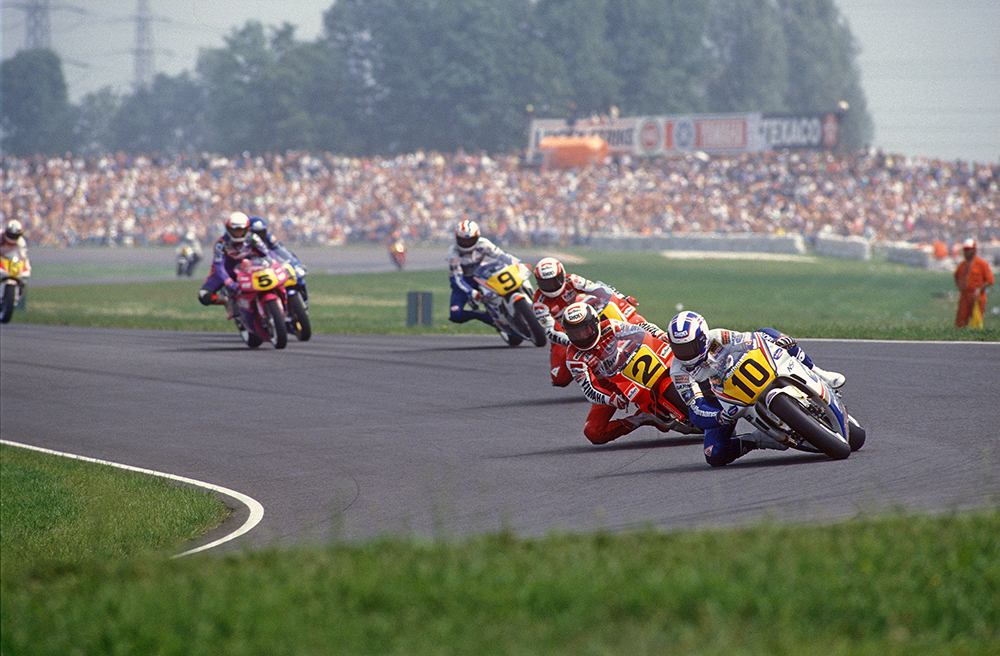 The Aussies and the Americans battle at Assen

Most importantly, Honda retimed the NSR’s crankshaft, from an even-spaced 90-degree firing configuration to 180 degrees, which fired cylinders in pairs to improve traction.

“During 1989 the engine character caused a lot of what people thought was a handling problem,” said Kanemoto, who worked with Gardner in 1990. 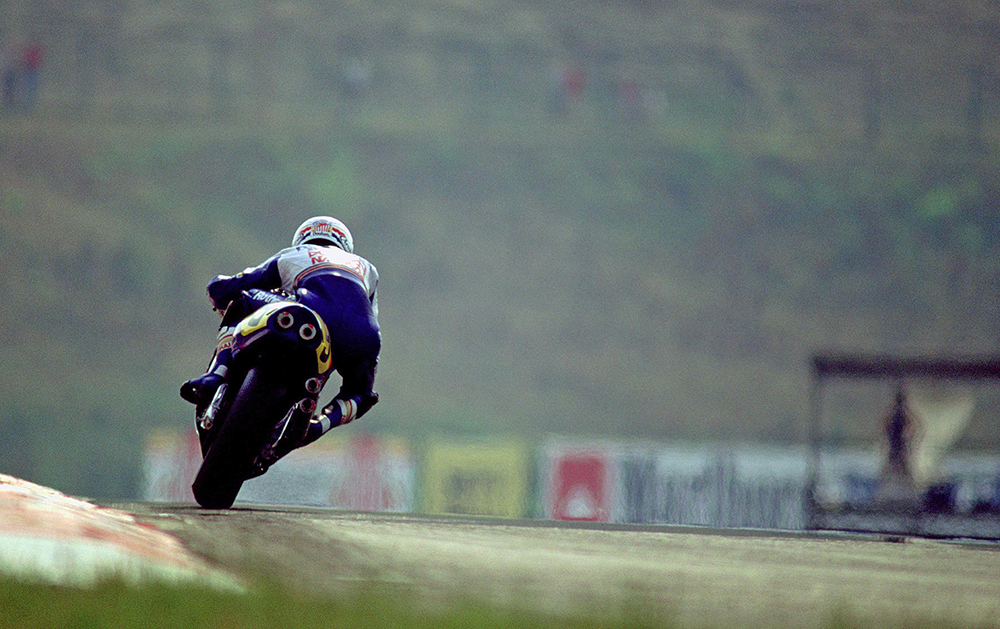 “We got a big gain with the 180, because the power hit wasn’t so abrupt, so the rider could start to open the throttle when the bike was leaned over. A lot of that was down to Eddie, because he’d ridden the Yamaha, so he knew the engine could be more friendly.

“I remember saying to him at the start of 1990, ‘you left one year too early!’ HRC had their eyes opened – they realised that this handling thing isn’t just the chassis, it’s engine character too.” 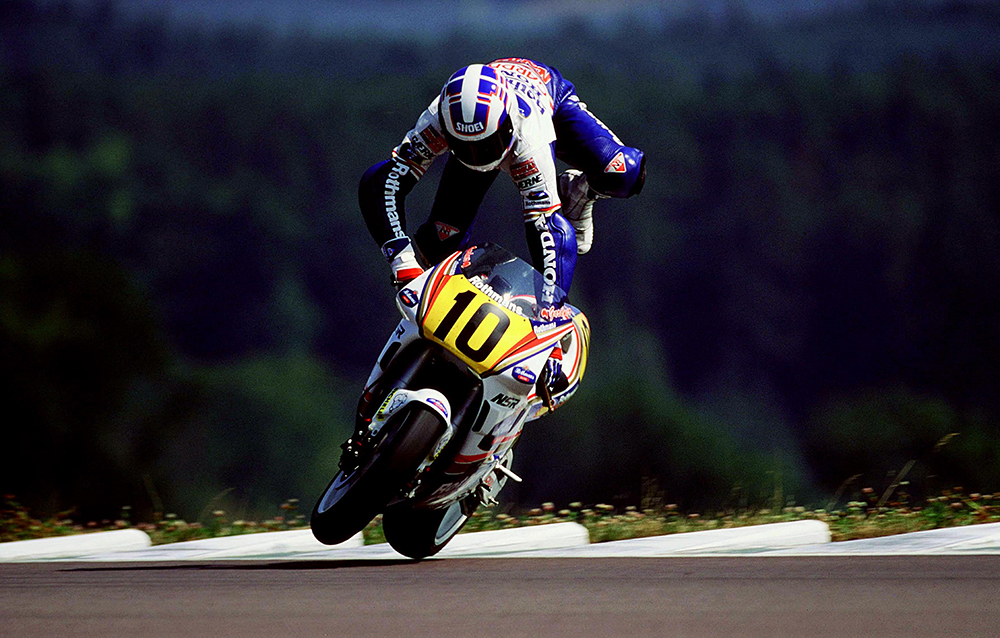 How Wayne Rainey remembers it

“I signed a three-year [deal] with Kenny that year, because I didn’t know what the market was going to do, so I might as well get in there while it was good. I knew Kenny’s team was going to be a big force and I wanted to be in the team that was going places. Kenny was always coming up with new things – he wasn’t afraid to go out testing and come up with some crazy ideas. That kept me excited. It wasn’t like Yamaha gave you the bike and you raced what you got – Yamaha gave us a bike and we had to make it better. I liked that.

“I don’t know which of my three championships was best, they were all quite different and special. That first one in 1990 we dominated. It was my first year on Michelins and I couldn’t believe how easy the other guys had been having it. When I got on those tyres I was like, ‘So that’s how these guys do it’.” 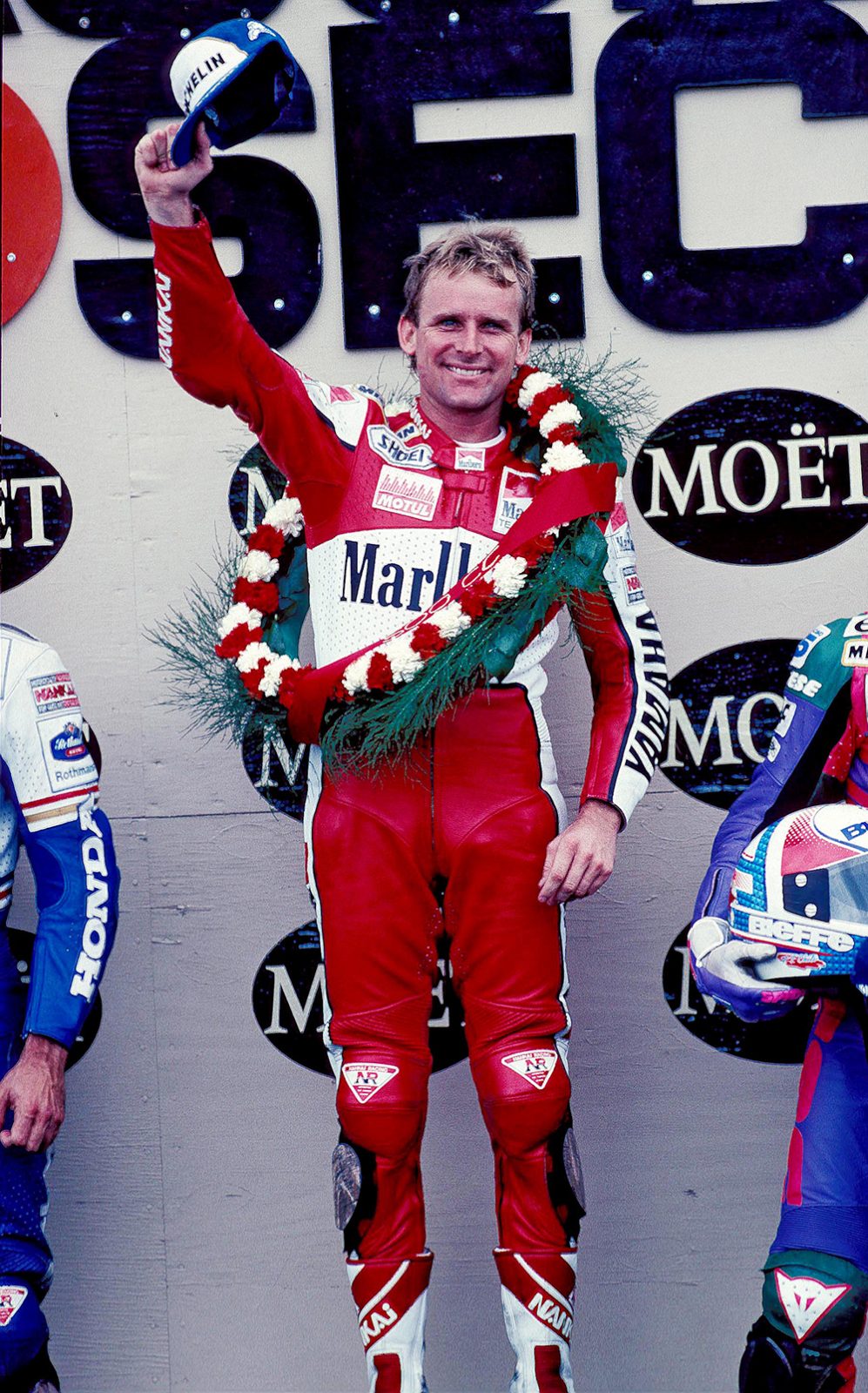 How Mick Doohan remembers it

“Winning was a relief, that was for sure. It was good to finally get one under my belt, because in my first season I had done my left hand, lost a finger and broken an arm in off-season testing.

“Initially the NSR wasn’t that great, especially the 1989 bike which would understeer, which is a pretty polite word for it. The bike would lean over but it wouldn’t turn. It didn’t do a great deal of anything good and it didn’t have a lot of feel. Then the NSR began to evolve. The 1990 bike was a step forward and it evolved further during the season, so by the end of that year we started to get it on track to become the bike that led 500 development for the rest of the decade.

“We started changing the steering head height, the engine position, the rake – a whole bunch of things. Although it looked similar from the outside it was a completely different bike. It started to become a bike that I had better feel for.” 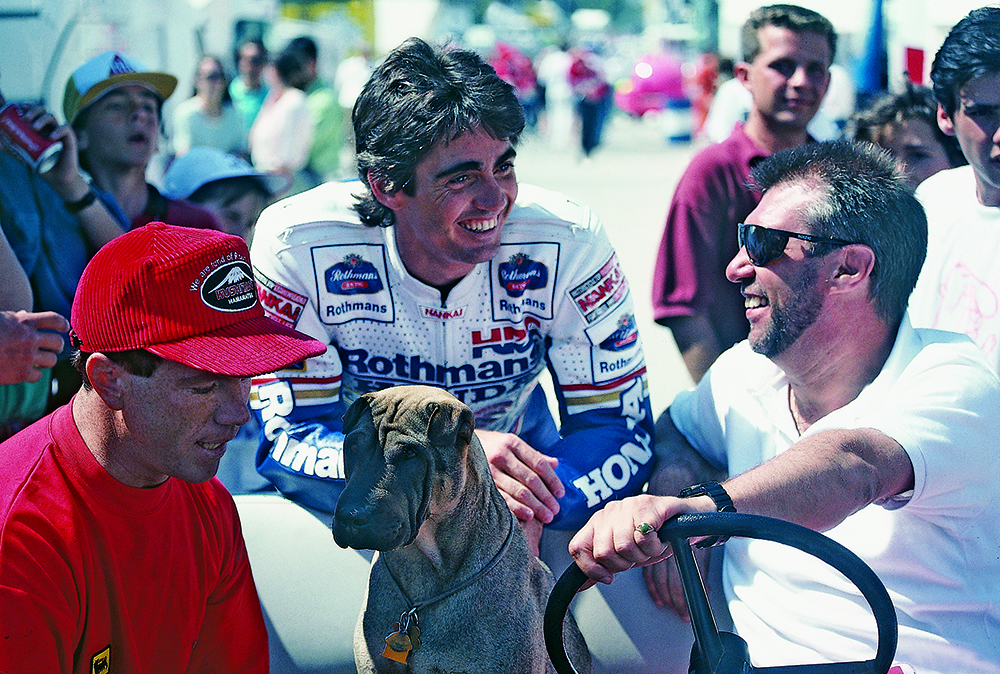 How Kevin Schwantz remembers it

“1990 was another of those years when it didn’t quite come together. Most of the time I raced 500s I was compensating for inadequacies in the motorcycle, for a slight miss in the set-up. I’m not blaming it all on the bike and the team, but on myself as well. I think every lap I did stuff a little different from the lap before, just from having so little experience. I didn’t start roadracing until ’84, so my learning curve was pretty steep.

“I was always the guy who rode a softer sprung bike, because I wanted to get a little more feel from it, so I could go, ‘Okay, now it’s moving’, rather than having it just go, Yaaak! and throw you.

“Wayne [Rainey] had a lot of luck in 1990. In Italy he had his racebike seize in Sunday morning warm-up. Then he had a brake disc crack in the race, just before it was stopped early. Then he crashed at 190 kays in Germany and only broke a finger. I fell at 60 kays at Laguna and broke a wrist.

“I kinda screwed up 1990 when I broke that wrist at the US GP. Laguna was one of those tracks where I always had shithouse luck. The benchmark was always Wayne and he was next to impossible to beat there. I tried full body sacrifice to try to beat him there and even that didn’t work.” 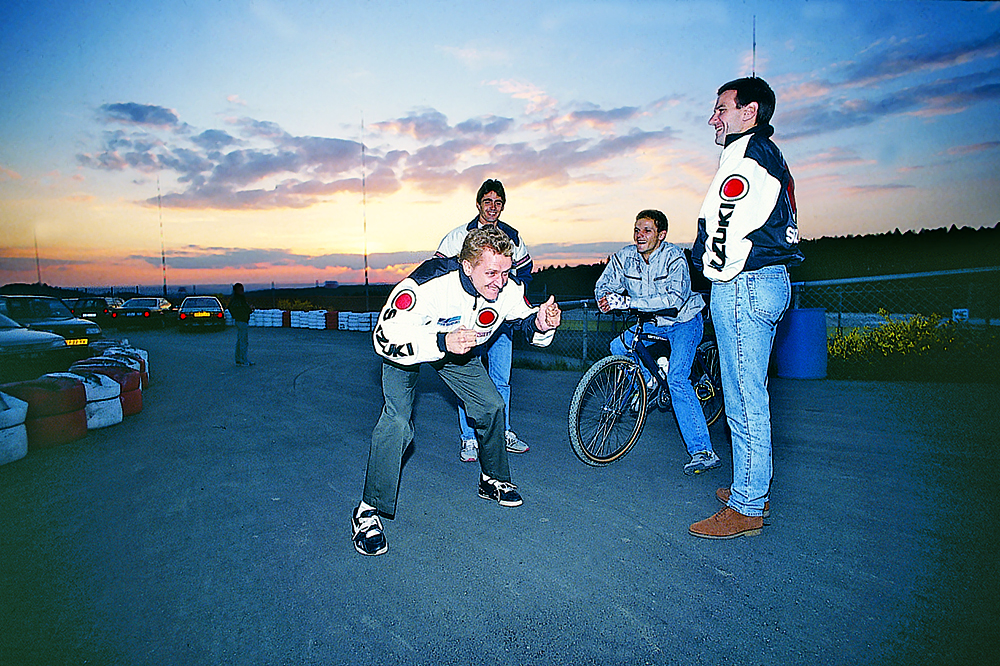 The 500 crisis – Replace them with four-strokes!

The 500 class was the premier category in 1990; it just didn’t feel like it. The grids were half empty and the bikes and tyres seemed to have been designed to put riders in hospital.

That’s why there were so many highsides in 1990, most famously the Mick Doohan/Pier-Francesco Chili synchronised highside at Nürburgring and Wayne Gardner’s huge shunt at Brno. In fact Gardner’s get-off was caused by an overheated read disc, not the classic slide-grip-flick scenario.

The situation got so bad that ending the 500 class was considered. Honda came up with a formula for 375cc triples that it thought would be safer and more affordable. FIM roadracing chief Joe Zegwaard preferred allowing four-strokes onto the grid, specifically TT F1 bikes, with race chassis powered by superbike engines. Funnily enough, this was the template for CRT bikes, introduced to MotoGP in 2012.

Others suggested the 500s should be axed and replaced by superbikes, like Ducati’s V-twin and Honda’s RC30.

In the end Yamaha and Honda saved the day. In 1992 Yamaha sold YZR500 engines to privateers, who housed them in Harris and ROC chassis, while Honda unleashed the rider-friendly big-bang engine, which allowed European ex-125 and 250 riders to handle 500s for the first time in a decade. 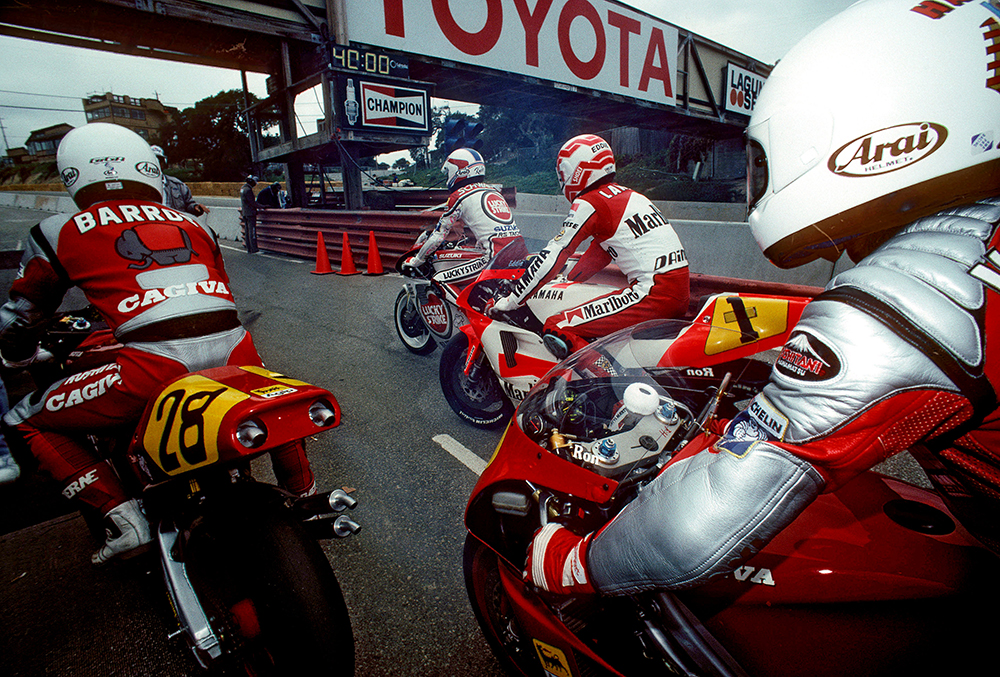