For the last 30 years, Scott Lee has known he wanted to restore an original 1981 Suzuki Katana. He just didn’t know it’d be quite like this

It was six months into the restoration of a 1981 Suzuki Katana 1100 when owner Scott Lee and restorer Dave Marett realised they needed to make a decision.

It may be because Scott was finally realising a 30-year-old dream of acquiring and restoring a Katana after the financial realities of a young family forced him to relinquish a Katana he was doing up in his 20s. Or it may be because Dave is one of the most fastidious and well-connected restorers of 1980s Japanese classics you’re likely to come across. Either way, the project hit a crossroad. 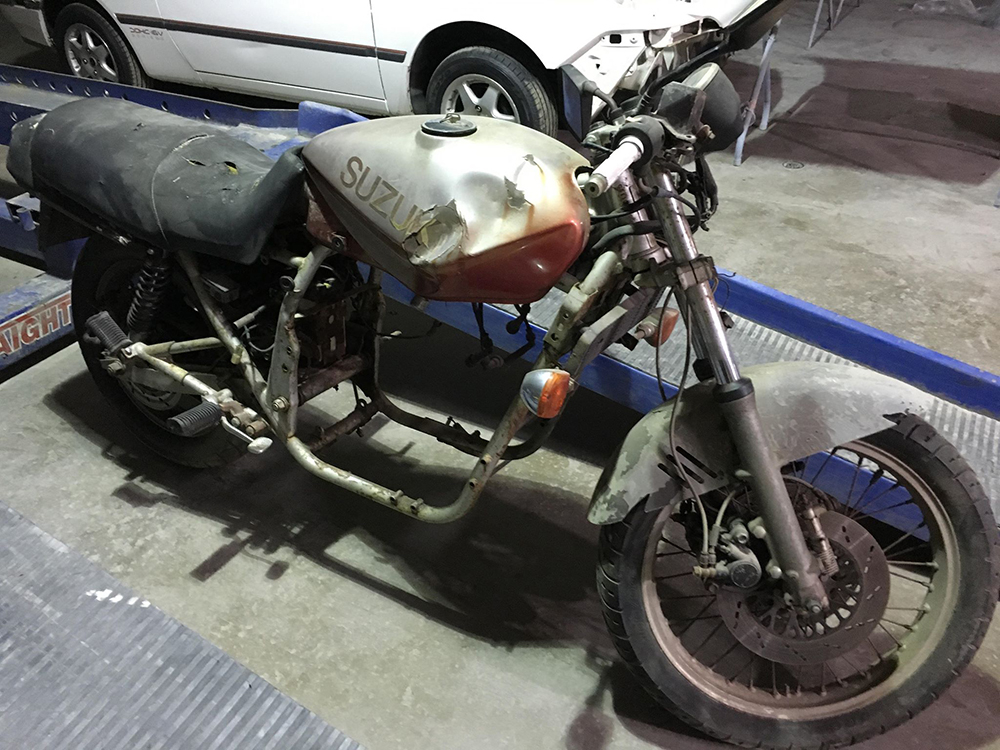 “After the first three months of trying to get everything, we were starting to get out of control and we got to a point where there was no return,” explains Scott, whose mixture of pride and excitement is clearly evident in his voice. 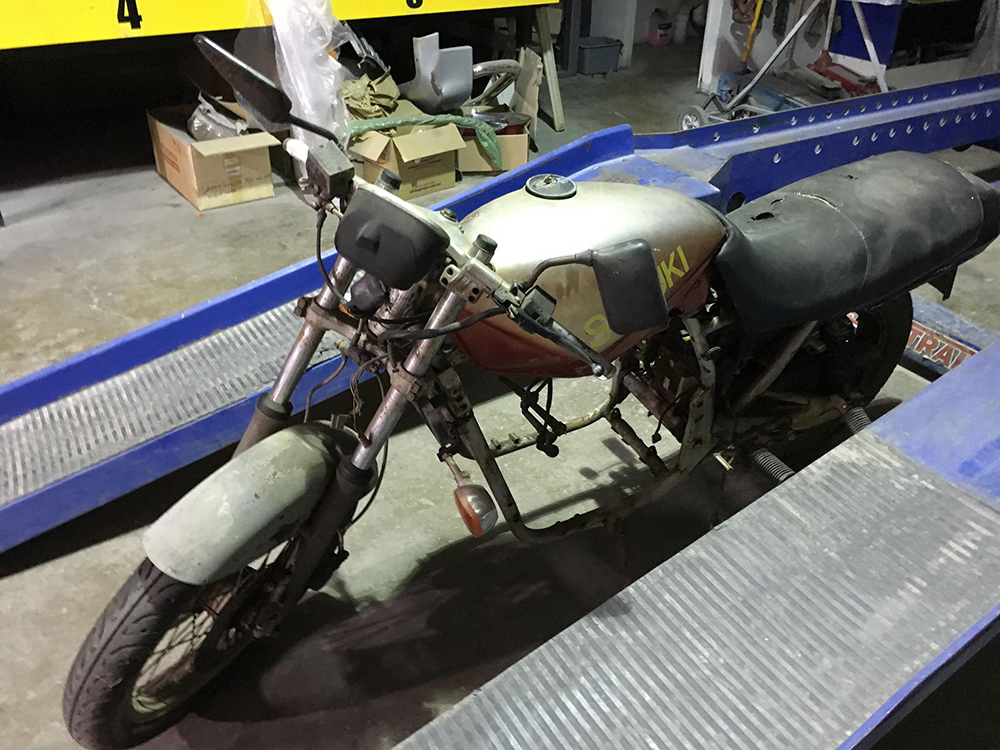 While we’re talking, I’m looking at a photo Scott sent me of the bike he got his hands on to start the project, and it’s far from anything resembling special.

It’s little more than a dinted tank and a ripped seat sitting atop an empty and tired frame. An instrument cluster is perched at the top of a heavily pitted fork, there are mismatched wheels and not a lot else. I asked Scott of all the bikes he could begin an undertaking like this with, why such a basket case?

“That basket case cost us four thousand dollars!” he says. “It came with a motor and a lot of parts that Dave refurbished, but we didn’t know at the time we bought it that it was an SXZ.” 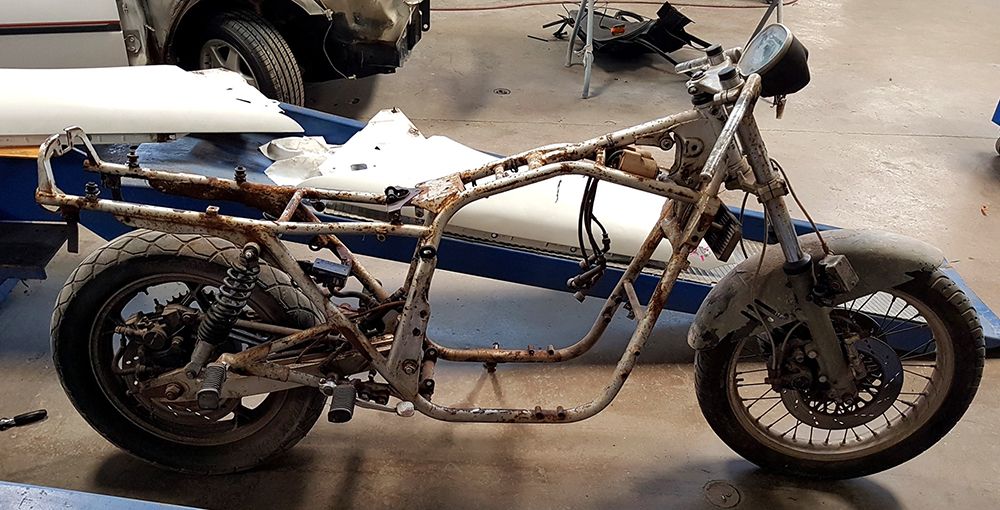 He’s talking about the wire-wheeled E24-spec 1100cc 1981 Suzuki Katana that was released in Australia in mid-’81 and of which only roughly 500 were built.

Scott owns a smash repairers in Bundaberg in Queensland and met Dave through his work as an automotive glazier. With almost a dozen restorations under his belt and a reputation that has earned Dave the moniker ‘the magician’, the stars began aligning for Scott to finally begin working towards his three-decade old ambition.

This 1981 Suzuki Katana was unearthed in a chicken pen in Brisbane and arrived in Bundaberg as what Dave refers to as “a bitsa.” As a bloke who’s onto his fourth Katana, he knows a thing or two about the model and, more importantly, has a string of well-connected contacts he can call on when needed. 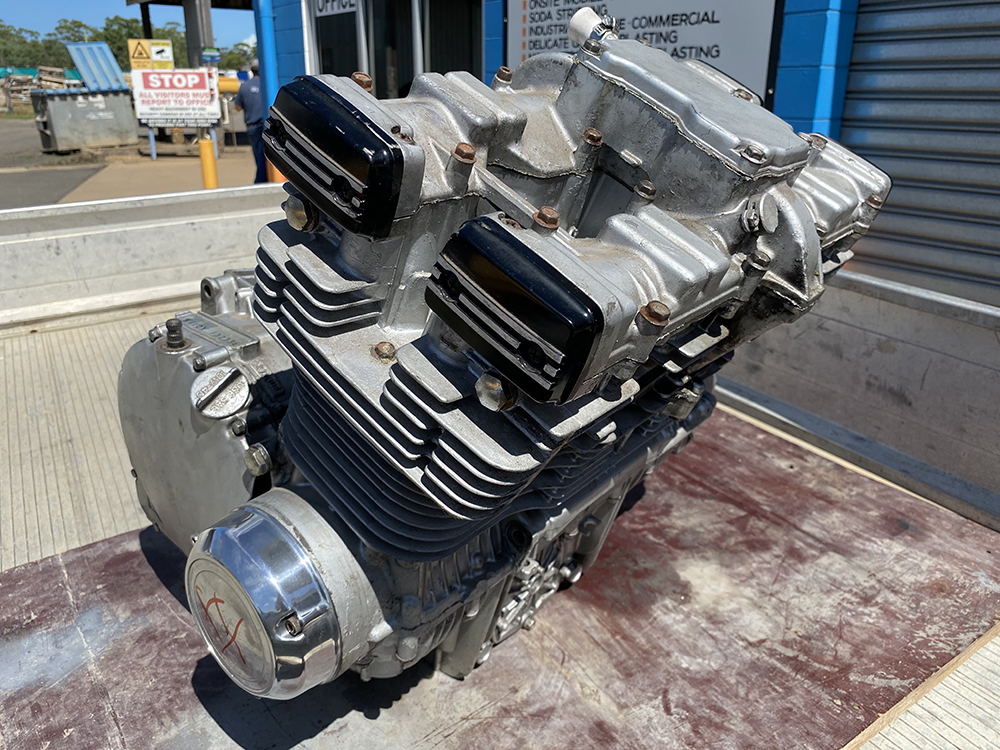 Like the bloke in Germany, for example, who he had pick up a brake pedal he’d sourced from a bike shop and post to Australia when Covid restrictions forced a four-month wait on trade.

Not that the build wouldn’t have been complete without said brake pedal; Scott and Dave already had two genuine pedals in their possession. 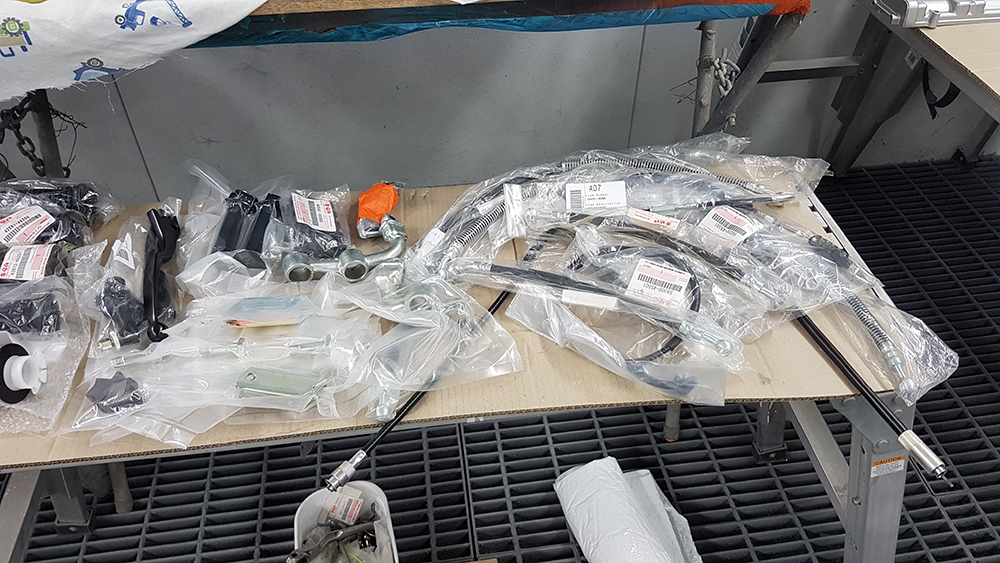 “But the checker-plate that’s on top of the pedal was worn on both of them,” explains Dave. “We wanted it back to OEM spec.”

And that’s the difference they were talking about between a ‘normal’ build and a ‘special’ build. The intricate detail afforded to the restoration of this 1981 Suzuki Katana is remarkable. That’s not to say Scott just went out and bought everything brand-new in order to achieve such a high-quality result, far from it. 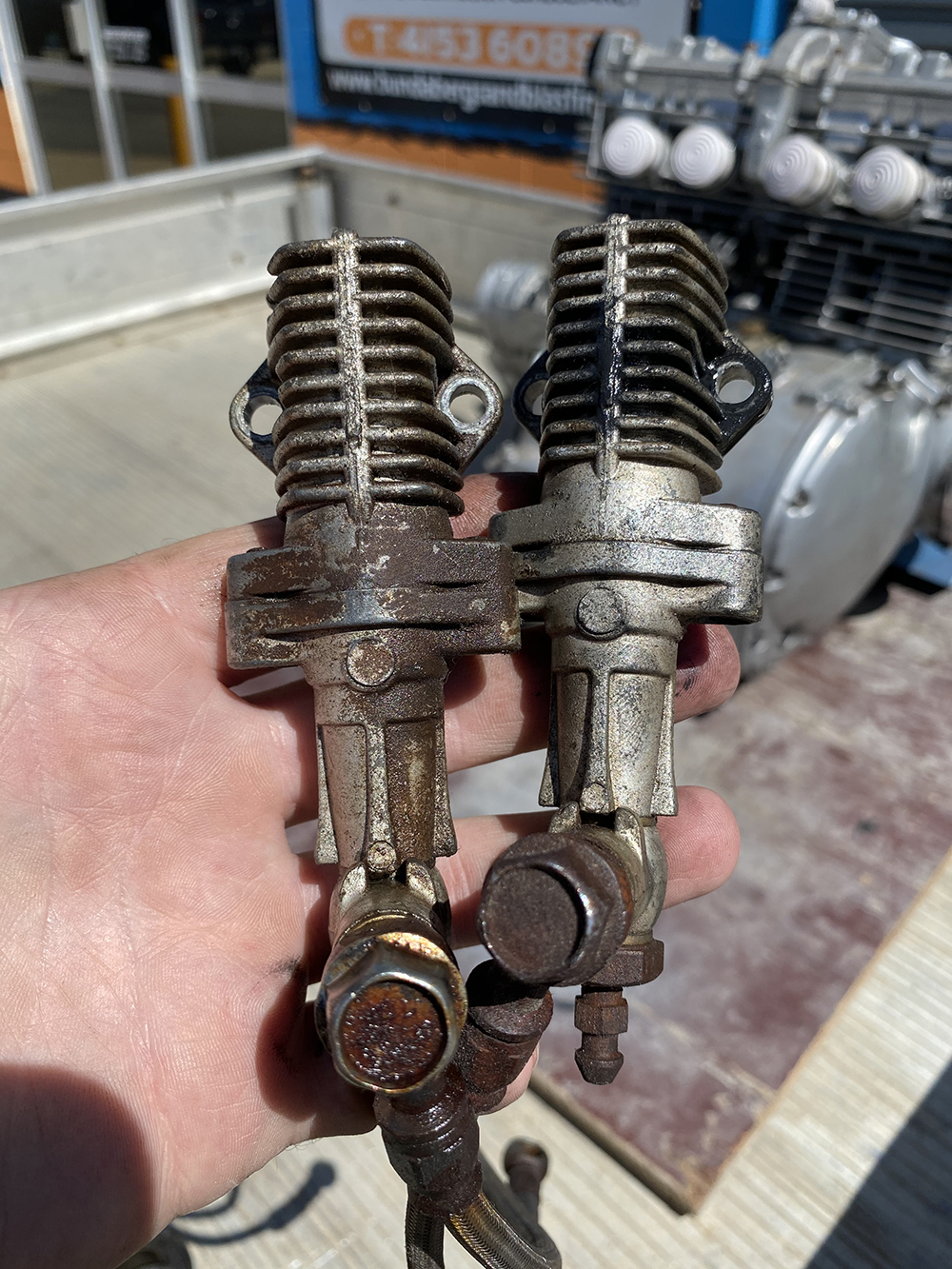 “All the main parts of the bike like the frame, brake calipers, forks, the swingarm, all the brackets, the centrestand, footpegs, the carburettors – even the motor – they’ve all been refurbished,” says Scott.

“Dave was able to track down a pair of Takasago rims – that’s what it originally came with and are hard to get and it took us a while to find them – we each took one and had a race on bringing them back to new.”

Scott purchased the so-called bitsa 1981 Suzuki Katana in September 2019 and it took the pair just shy of 18 months to achieve the immaculate result you see here. And even though it was all but finished when I spoke to the pair in mid-February, they were yet to fire it into life. 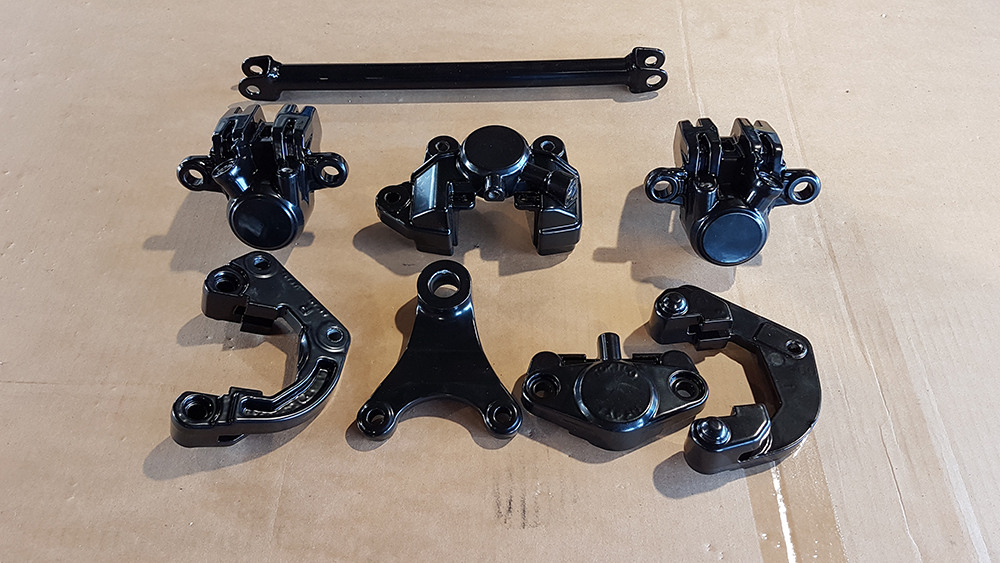 “I’ve brought the trailer in today because I’m taking the bike to an auto electrician – the same guy who built the motor, in fact – to put all the electrics in it, it’s the last job,” says Scott, who’s audibly beside himself with excitement that the project’s so close to completion.

“But I promised Dave he could be the first one to ride it – he’s put so many hours into this, you wouldn’t believe.”

Actually, unbelievable is a good word to describe this thing. A good example is when the motor was painted. While most people would put the motor together before painting it, Dave painted it in pieces before reassembling it, so that the OEM gaskets were showing between the cases, just like they would have been when the bike was brand new. Even every nut and bolt is a genuine Suzuki part. 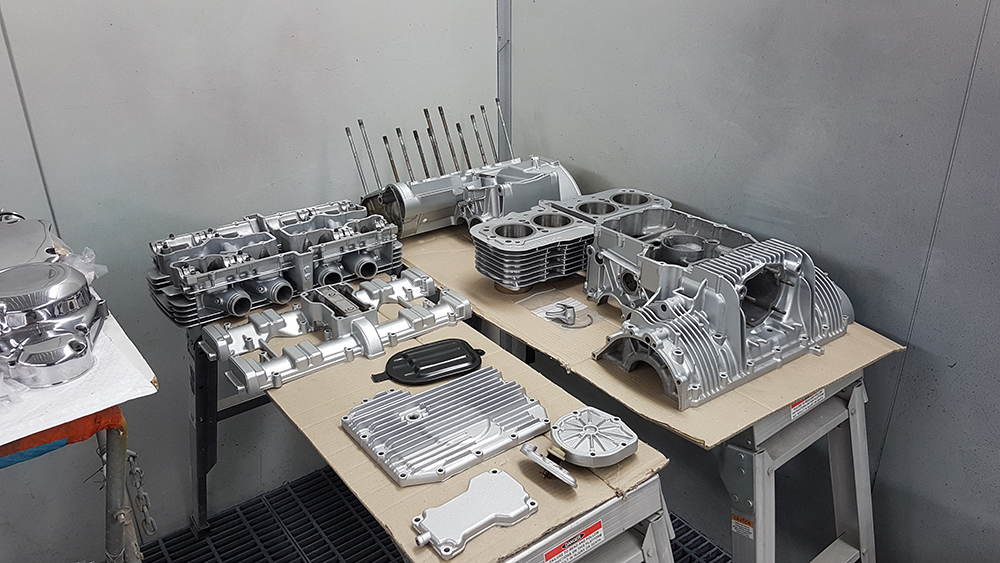 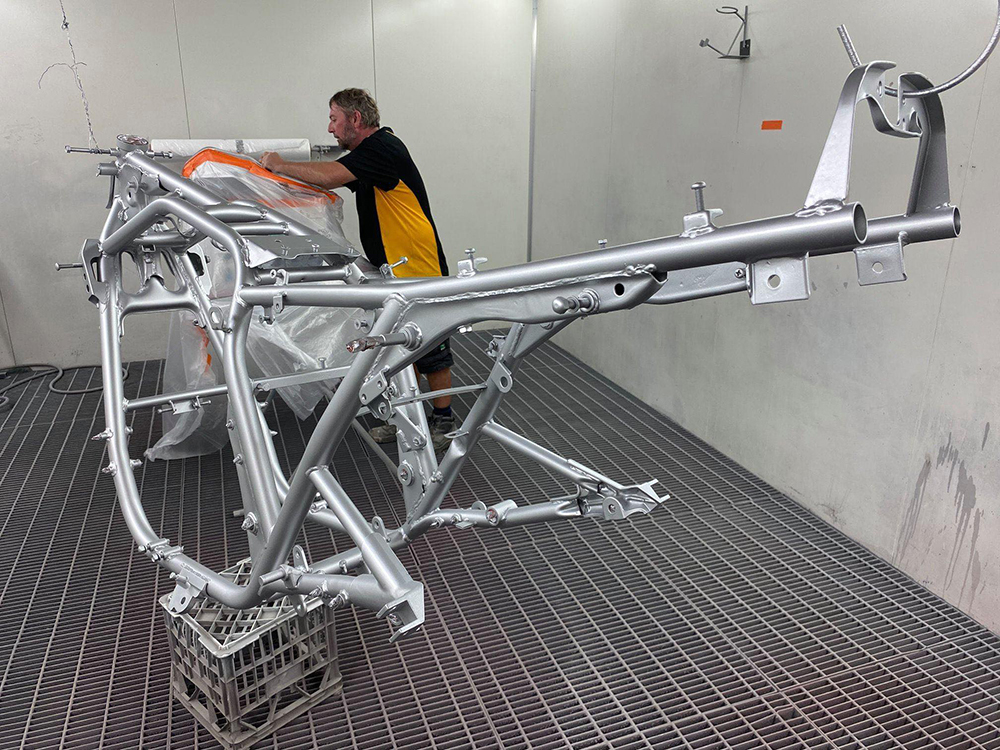 “We went to that level of detail and that’s where all the money went,” said Scott. “A bolt’s bloody three dollars and there’s like 50 or 60 of them. That’s where the detail is and how far we went to make sure it’s right.

“And that’s how come it’s such a beautiful bike today.”

According to Dave, almost 80 percent of the bike is brand-new original parts, most of which were sourced from Mick Hone Motorcycles in Melbourne, some 1900km south of where the pair were realising Scott’s long-held dream. 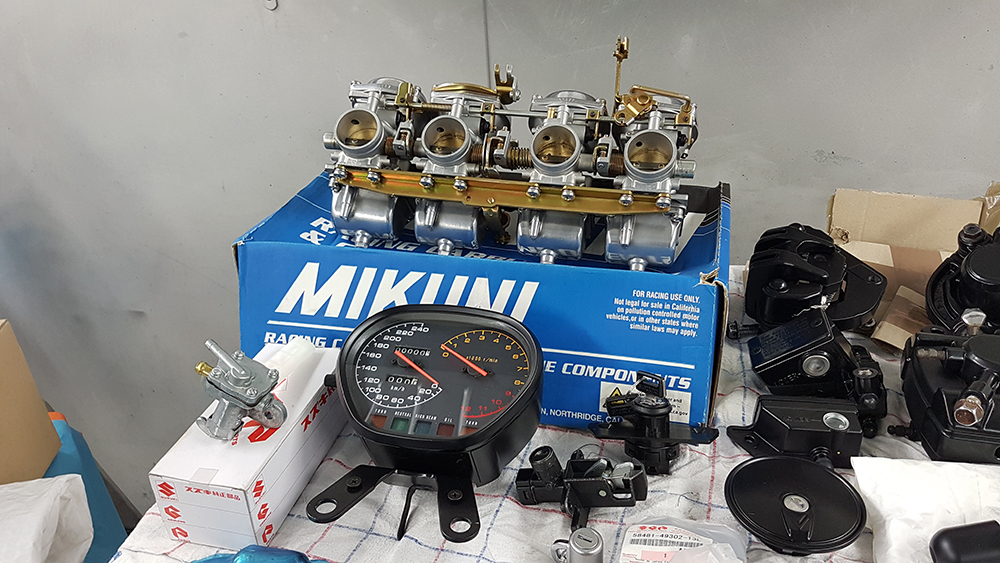 “Everything we could get new, we did. We’ve got shares in the place now,” laughs Dave. “But three weeks ago it was still only a frame. The most time-consuming bit is sourcing and restoring all of the parts.”

And sometimes even that would happen more than once. Like the brand-new clutch cover, which arrived with a less-than perfect finish, so Dave sourced a secondhand one and polished it until he achieved the exact finish he was after. 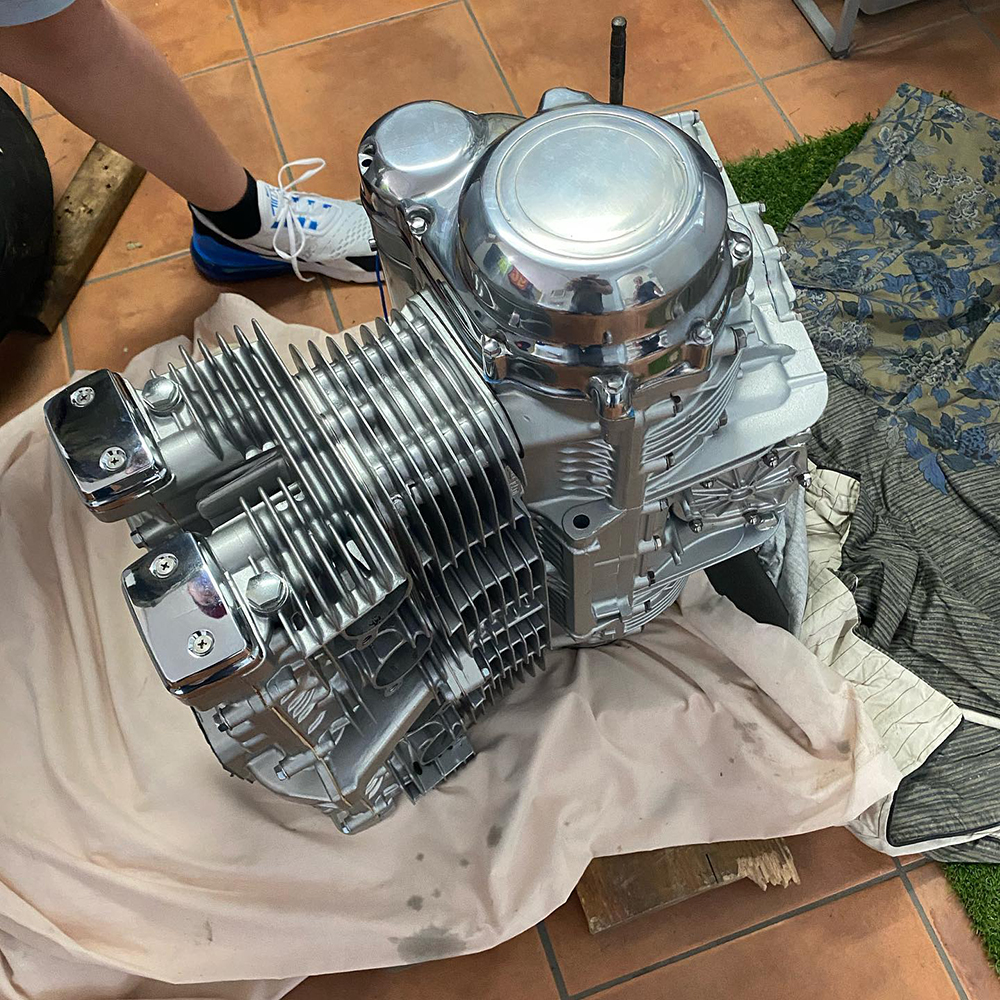 “Even the motor,” adds Scott. “We vapour blasted the motor, then it went to get machined, and then we found out there was a hole in the head – because it was sitting around for so long, there must have been water sitting in the exhaust port for all of those years, and there was a hole through the port into the motor.

“So we had to scramble around for another head, get it re-vapour blasted, re-machined, re-painted – all of that sort of stuff.” 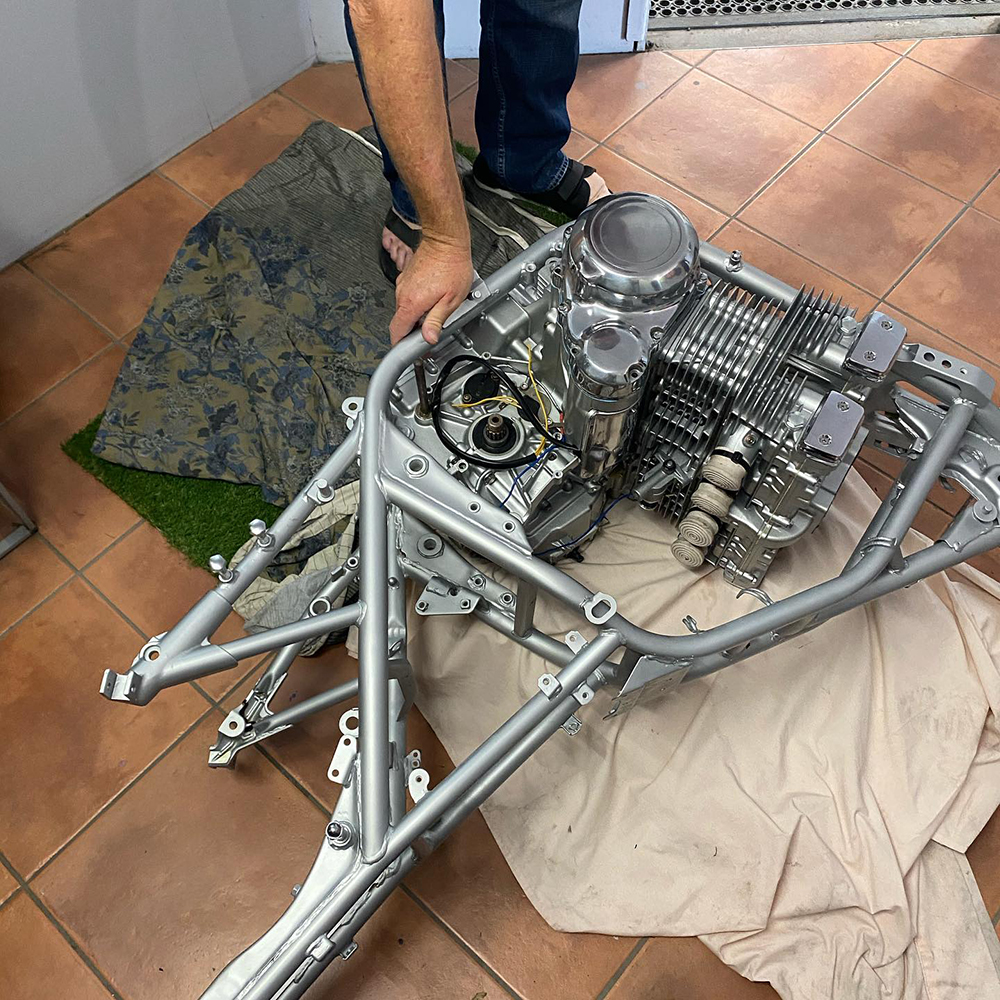 The engine itself arrived with an 1170cc kit in it, but through Dave’s connections they realised if they were running a standard exhaust – and of course they were – that an 1135cc kit would return the best results.

But that’s pretty well where the straying from 1981 Suzuki Katana OE-spec ends. That, and the synthetic-suede seat cover, because you simply can’t buy the genuine suede item anymore, and the Pirelli Sport Demon tyres they’ve opted to fit to the finished bike.

“Everything else is standard,” he says.

“Even with the shocks; we bought them from Mick Hone and they came with black springs. But to make them right for the particular model we had, I asked him to dismantle the springs and send them off to a chromer so they looked period-correct. 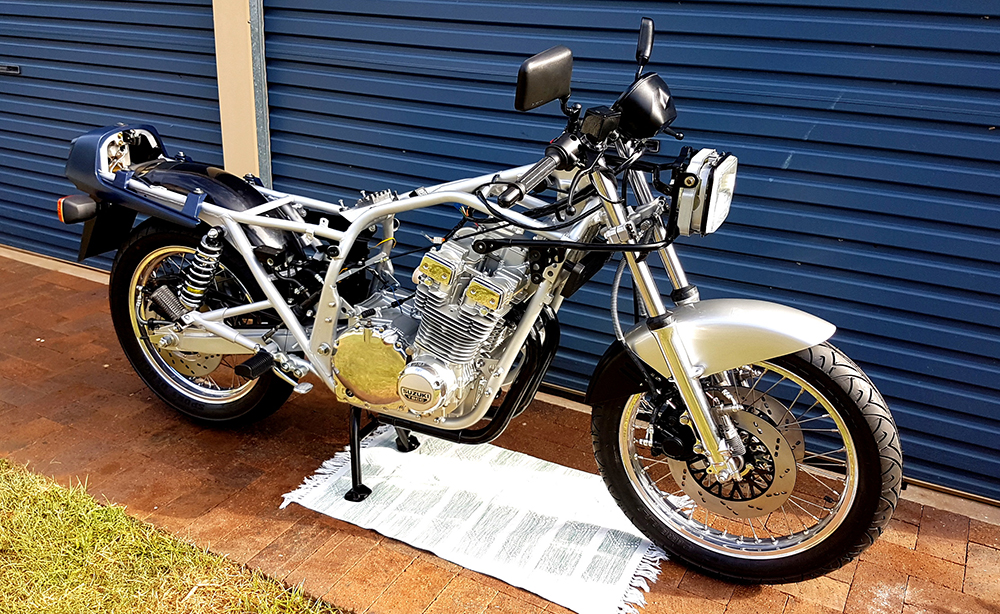 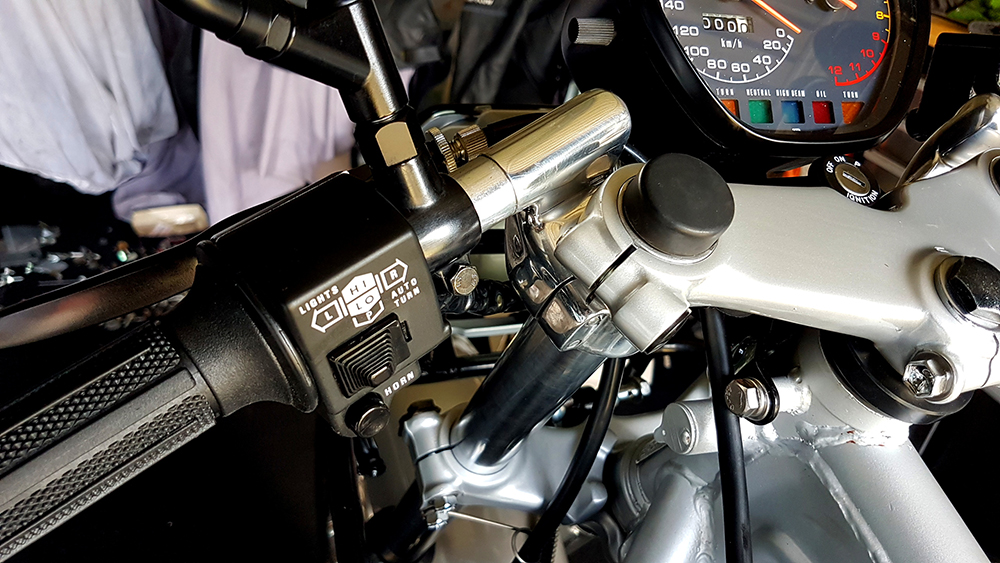 “We thought the original seat was okay and we sent it away and got it re-covered, but we got it back and when we went to put it on the tank, it was out of shape,” he continues. “We didn’t know, it looked perfect and it came back looking beautiful. But when we sat it on the bike it didn’t sit on the tank properly. So in the chook pen, it must have twisted out of shape.

“So even as of last week, I had to go out and buy a new seat, to send away to get re-covered again, just to make sure it was spot-on.” 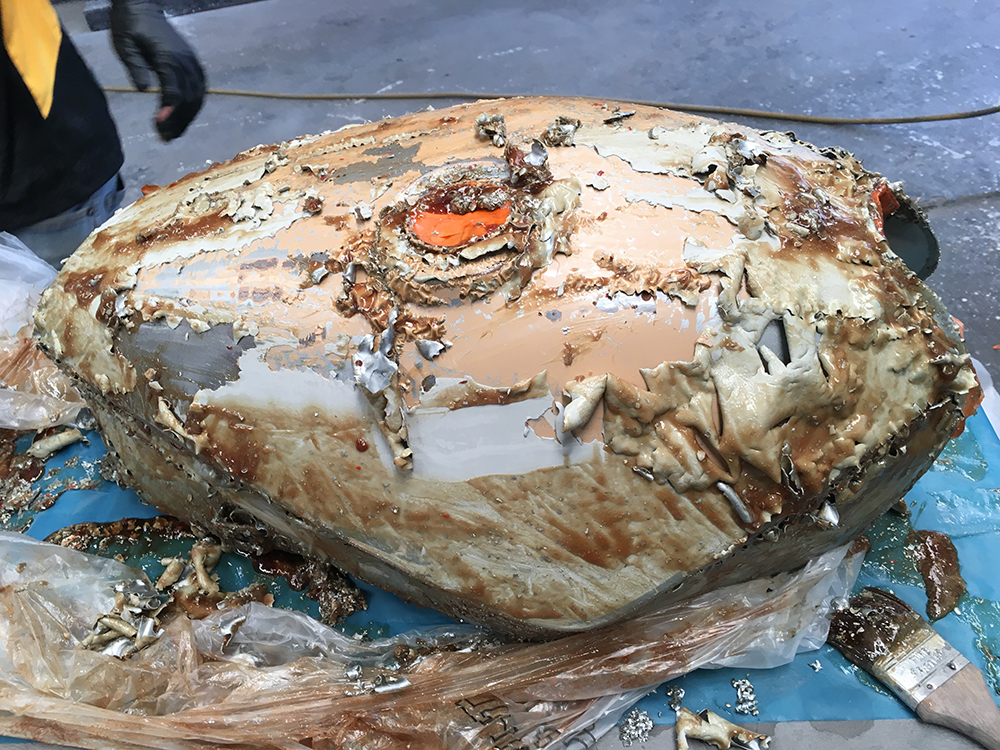 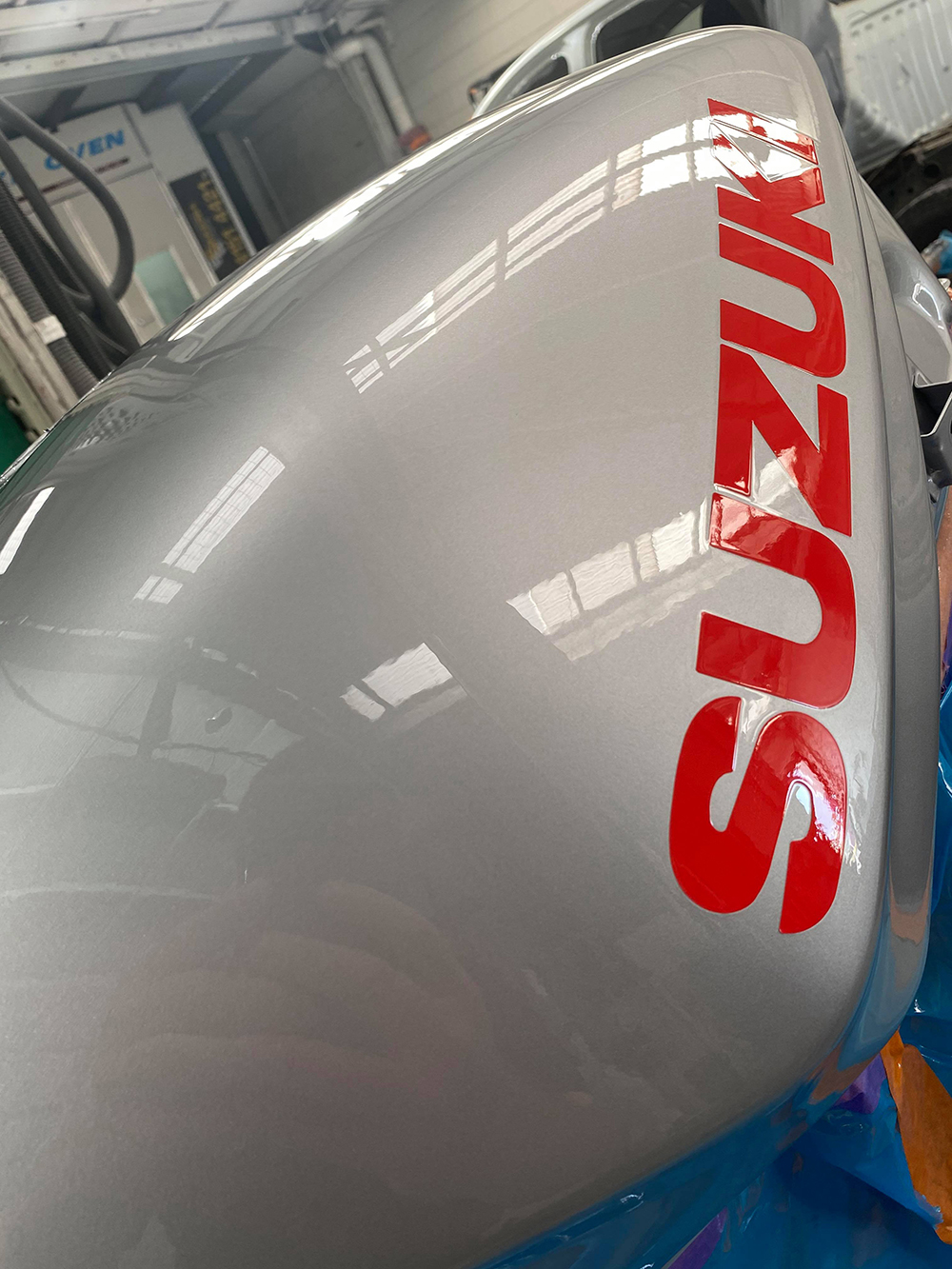 While Dave refers to the process as a “dream build”, he concedes the project would have taken a lot longer without the help of social media, the following the iconic model has garnered all over the world and the online community’s ability and willingness to help.

“Dave would put a post up about a side cover or something like that, people would forward it on to other people and then the next minute, people are saying ‘yeah, I’ve got one of them.’ It’s a really good community and if someone needs helps they’ll jump on board.”

The exhaust system is a brand-new Suzuki genuine item, a part “worth more than the bike that we started with” but the refurbished instrument cluster is Scott’s favourite piece of the entire build. 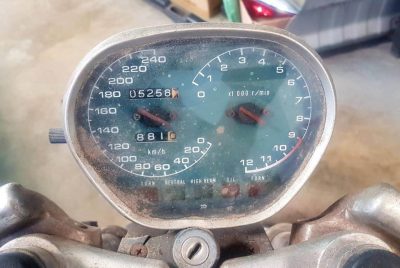 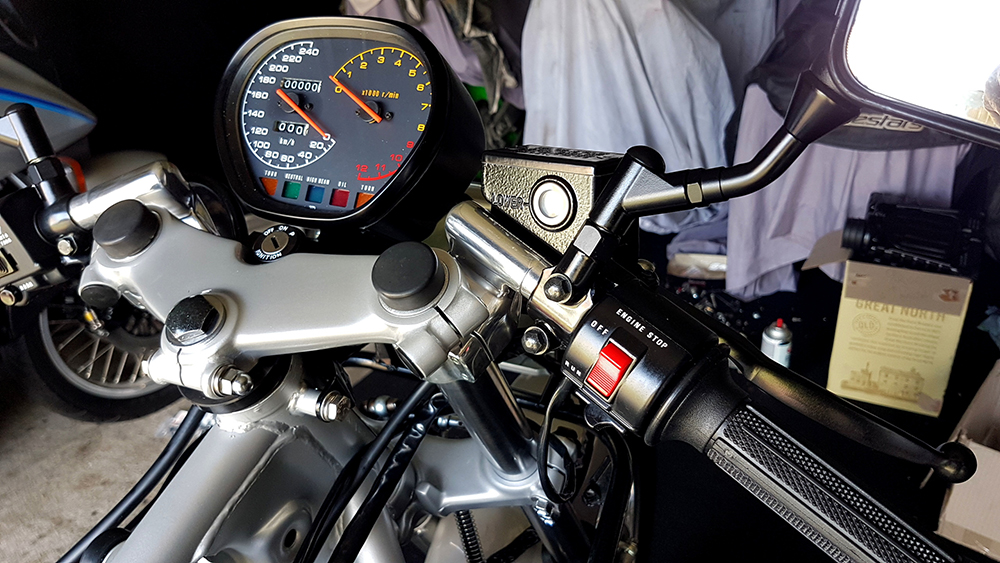 “Because if I picture them for what they were to what they are now, it’s incredible,” beams Scott. “That was a guy in Melbourne called Andrew Nicol. He refurbishes instruments, and it just blew me away when they came back.”

Given the family pressures 30 years ago to relinquish his first Katana, I couldn’t help but mention how patient his wife has been through all of this, especially taking into account the various other pressures that came with 2020.

“Yes, she’s been awesome, to be honest,” he says. “The bills would come across the bench and she’d ask: ‘Is this for the bike?’ And I say, ‘yes babe’, and she’d just turn her head and keep on going.” 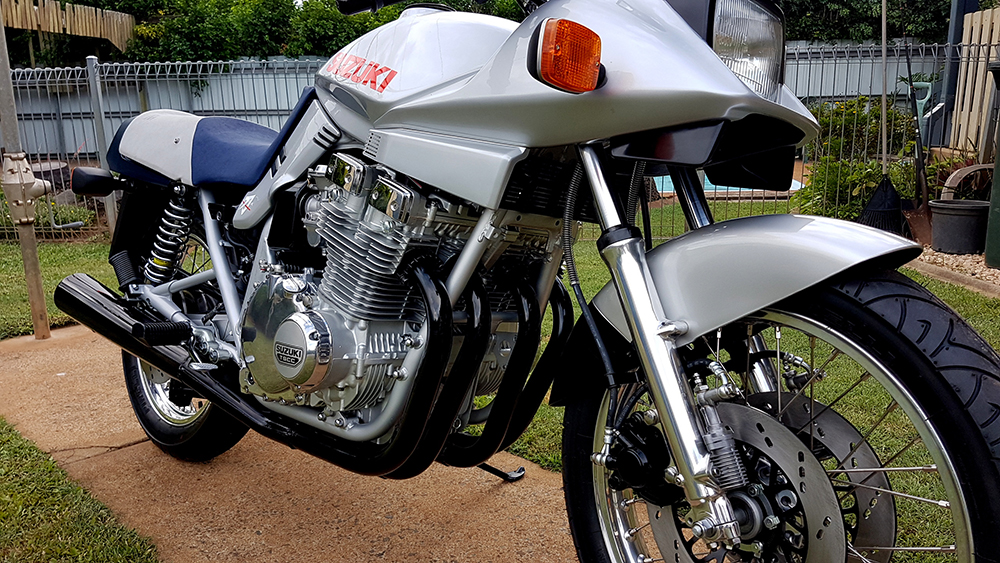 “No. I don’t want my wife to know!” he replies before erupting into laughter. “Even though she’s seen all of the invoices, I don’t think she’s added them all up yet.”

The best news is that regardless of the painstaking and fastidious nature of the restoration, Scott intends to ride it rather than put it behind glass and on display, which you wouldn’t blame him for doing. It won’t be my daily, it’s so nice, but I’ll probably get it out once a month and go for a good ride and put it away,” he says. “It’ll be on normal rego, it won’t be on club rego, and I’ll just ride it to enjoy it. 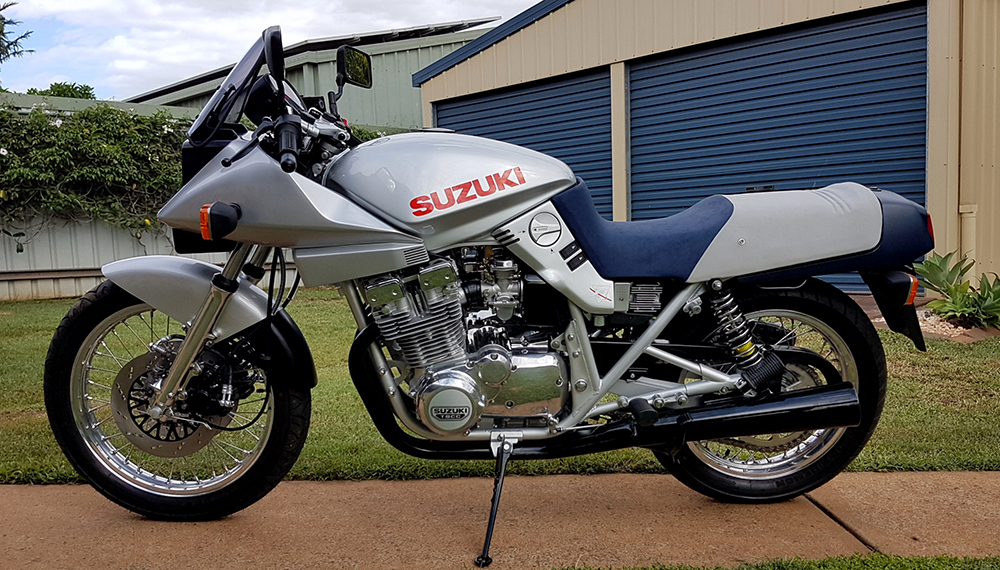 “I’ve been including my little boy Archie all through the build, he helped us strip it down and pull it apart,” begins Dave when I ask what’s in store for the bike’s future.

“I’ve already had someone interesting in buying it – Dave said no way – even if I did sell it I don’t think I’d have any teeth left after Dave got to me [laughs]!” 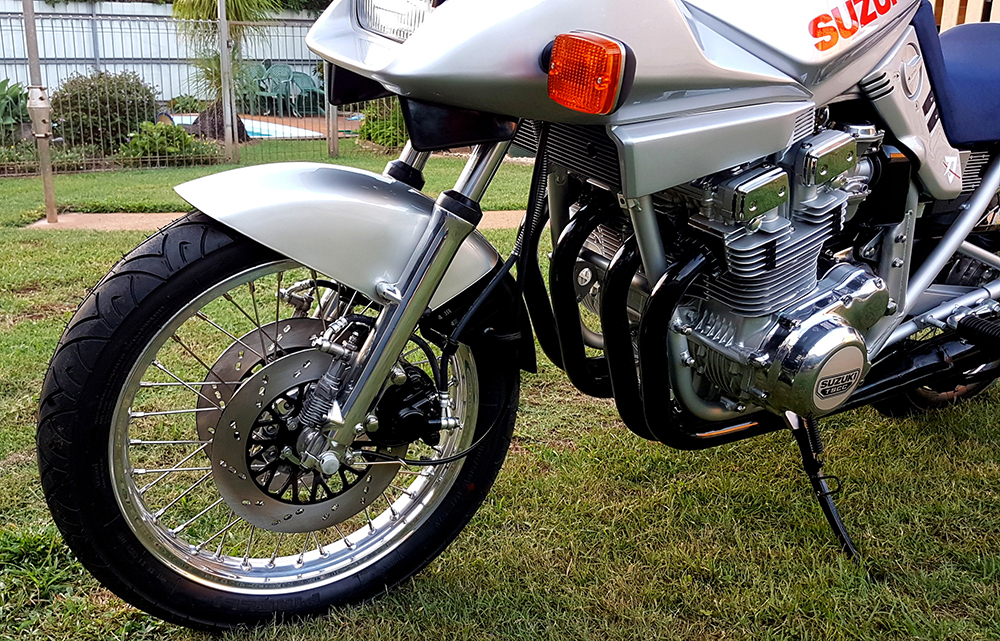 I ask Scott whether, if given the chance to do it again, would he do it to the same level of impeccable detail as he did this one. Would it be a normal build, or another special build.

“Well, I’ve got twin boys so if I did it again the other one would get a bike! Put it this way; I personally think it’s been a learning curve for me all the way along. It’s been enjoyable. The conversations Dave and I have had all the way along have been just amazing,” he says before pausing to contemplate the question. 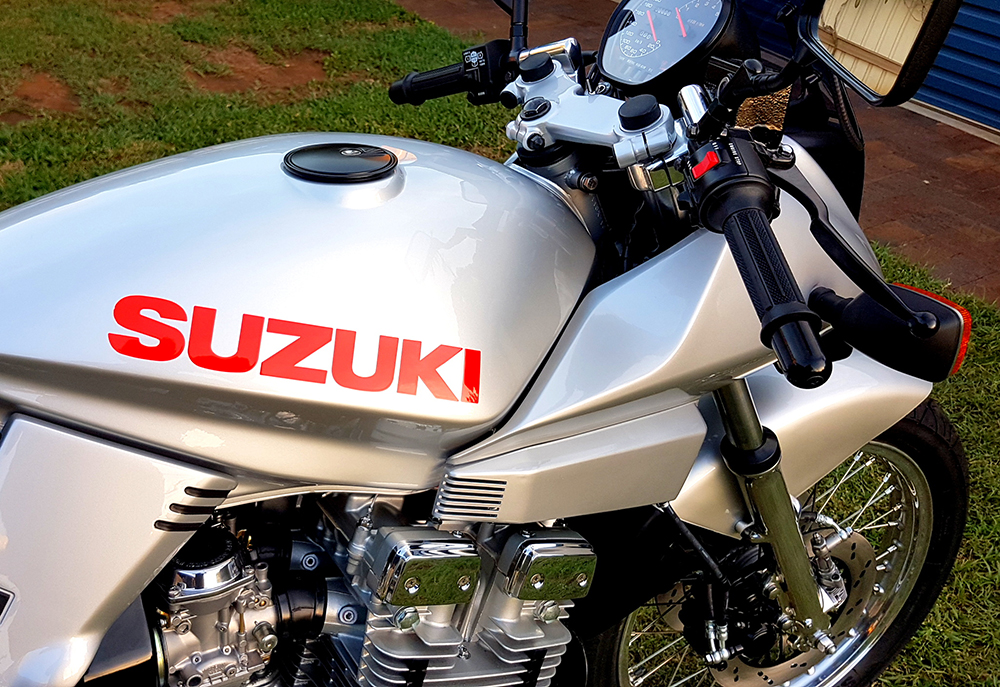 “Yeah, I would do it again – funds permitting.”

And hearing the pride and accomplishment in both Scott’s and Dave’s voices I’d believe it, too. But what they’ve achieved is far more than a life-long dream to return an iconic machine back to OEM spec. They’ve brought together a community of enthusiasts to reach the outcome, they’ve planted an important seed of understanding and appreciation in the next generation of motorcyclist and, I suspect, formed a friendship that will see out their days.

“The other night Dave rung me up and he said, ‘Scott, I’ve sat in front of this bike for an hour and half looking at every nut and bolt and seeing if we need to change anything’ and he goes, ‘I can’t see anything – this bike is faultless.’” 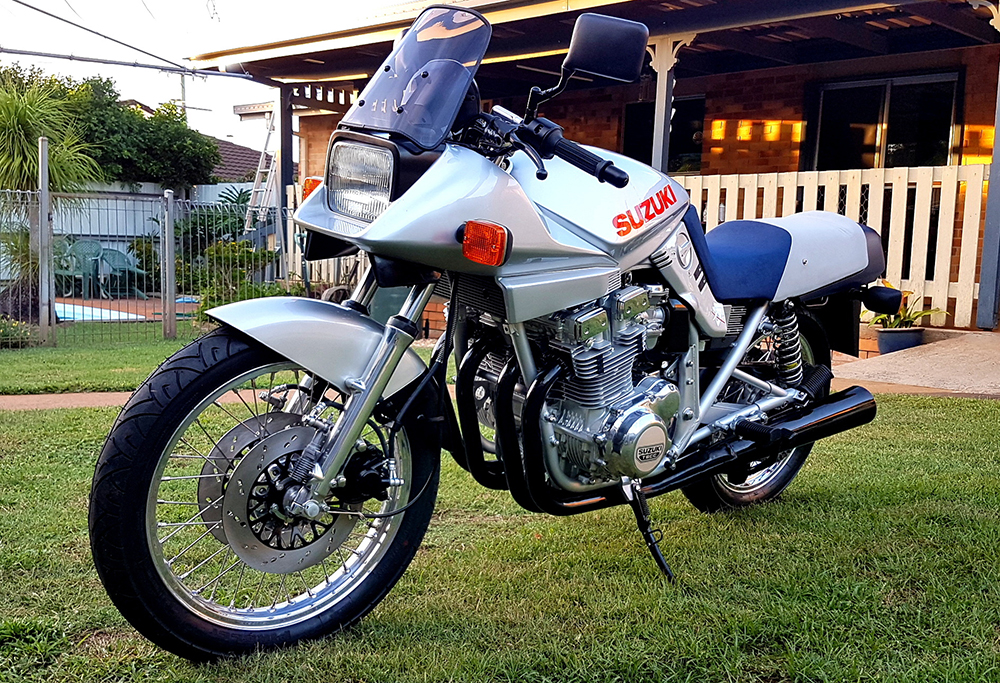 The team at AMCN agrees. This 1981 Suzuki Katana is as good as it gets. What do you reckon?