Huge bolts jammed into the rear tyre and a few loose screws under the lid. Welcome to the gravity-defying motorcycle sport of hillclimb

Surely bloody not. Two 300cc two-stroke engines mounted in the same chassis, it looked like computer editing. The swingarm was too long. Hang on, there’s a pair of 700cc Zabel engines – usually only found in sidecarcross outfits – over there in a Frankenstein-looking bike. What the hell did they put in my coffee?

I’d found myself at a round of the French Hill Climbing Championship and as a pure novice to the rules, the bikes or the people who race it, I had ears and eyes wide open.

And, as it turns out, wide open is mandatory; “Competitors are allowed bolts, in free quantity, fixed inside the tyre. Or paddles linked together by a rod, a cable or a chain,” came the answer when I asked an official about the rules. 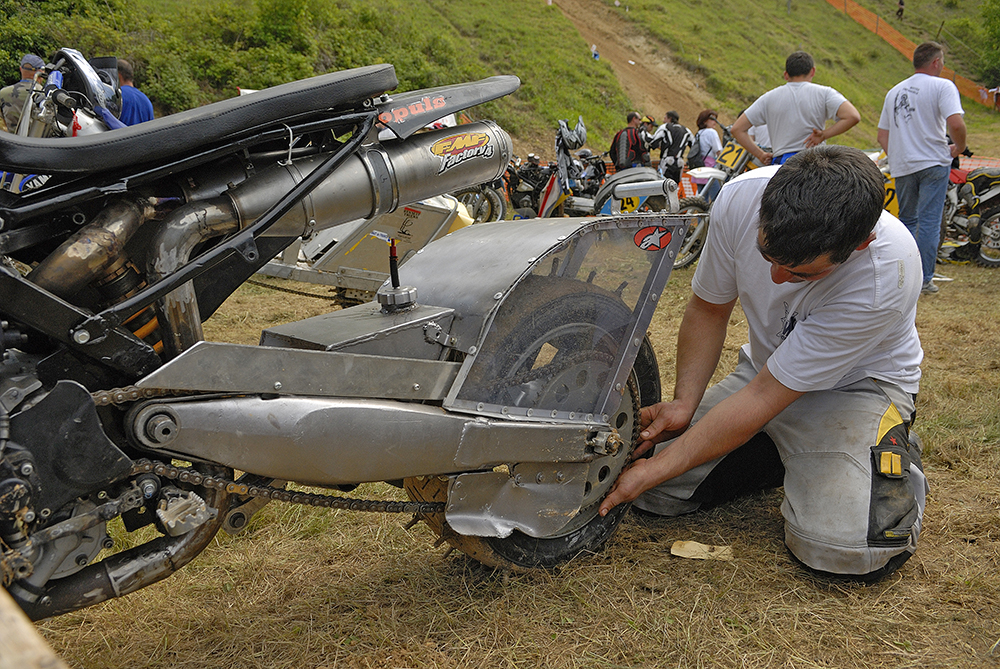 Aboard a loud and cranky four-cylinder engine, Franck spins his wheel for a few meters before losing the rear and falling flat on his head. He dusts himself before kicking his bike, which seems to make him feel better.

Though it’s hardly surprising. A high-powered superbike engine trying to get power down to a chopped up dirt ramp via a nine-foot long conglomerate of scrap metal. At the end of the dirt ramp, there is a vertical wall of rock to get over. But before this point, most riders have already bounced like a spring, flicked sideways, this way or that, whichever way the bike dictates, and eaten dirt. It’s like planned whiskey throttle, open the taps, hang on and see what happens.

There’s a woman competing today and I asked her her strategy. 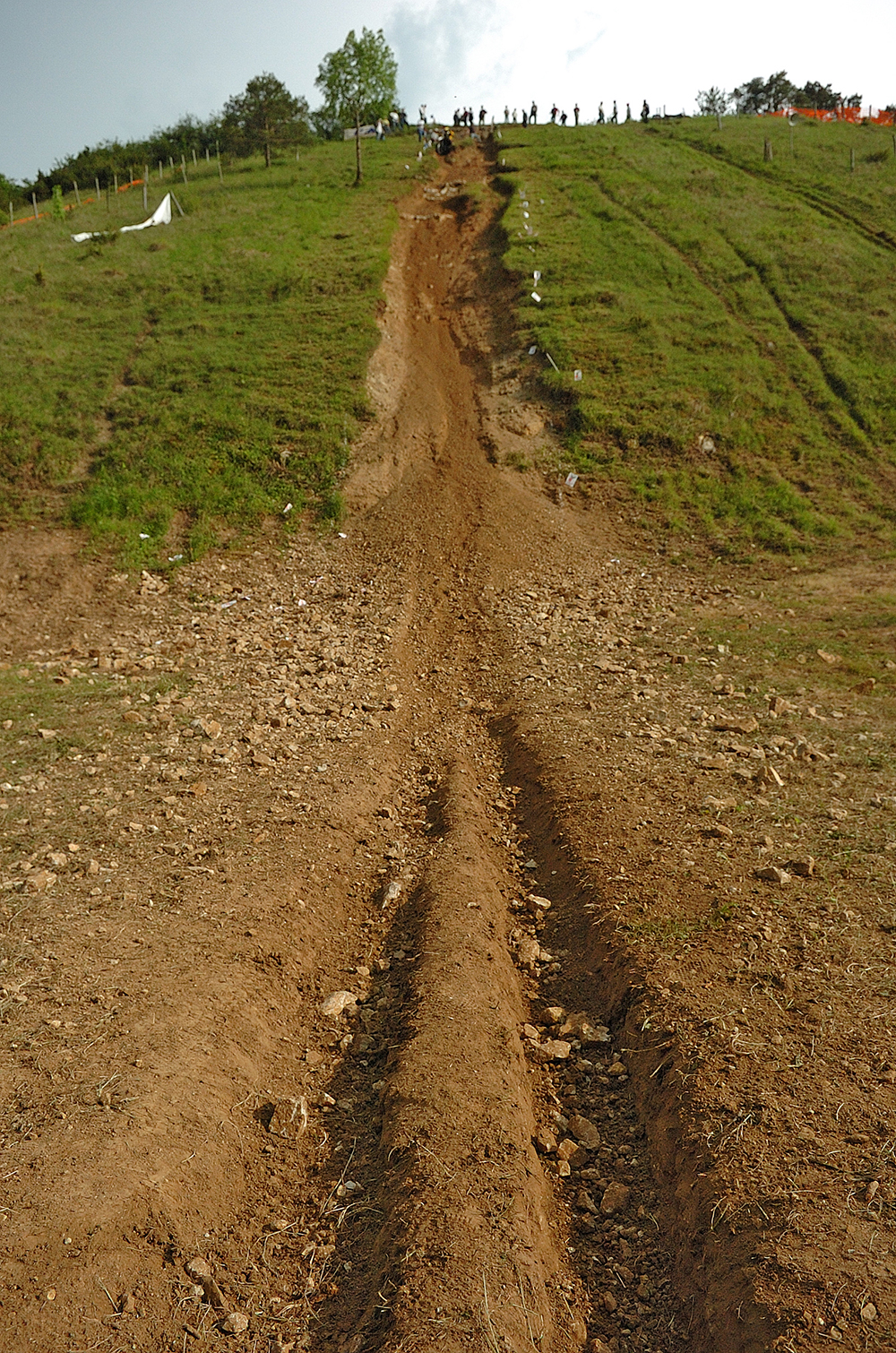 The Harley-Davidson she shares with her racing father runs on nitro methane. Between the high state of tune of the engine and the rocket fuel it’s fed on, the American V-twin spits two hundred horsepower and the physically huge engine barely finds place in the handmade alloy frame. Most of the Japanese four-cylinders are stupidly powerful too, but they’re all top-end and peaky, so you have to work to keep them revving. That makes them, well, delicate to handle on such a loamy track.

Looking around the loud and colourful paddock, I notice that V-twins are really popular: Ducati, Aprilia, the Harley and even a late-model Voxan. They have a heap of torque low-down in the rev range, which allows the riders to wind the power on easily and relatively predictably. About 30 prototypes are racing today and their preparation is second to none. But the bike is not everything, just part of the insolvable equation. In fact, in France, Hill Climbing is actually called Impossible Climb. 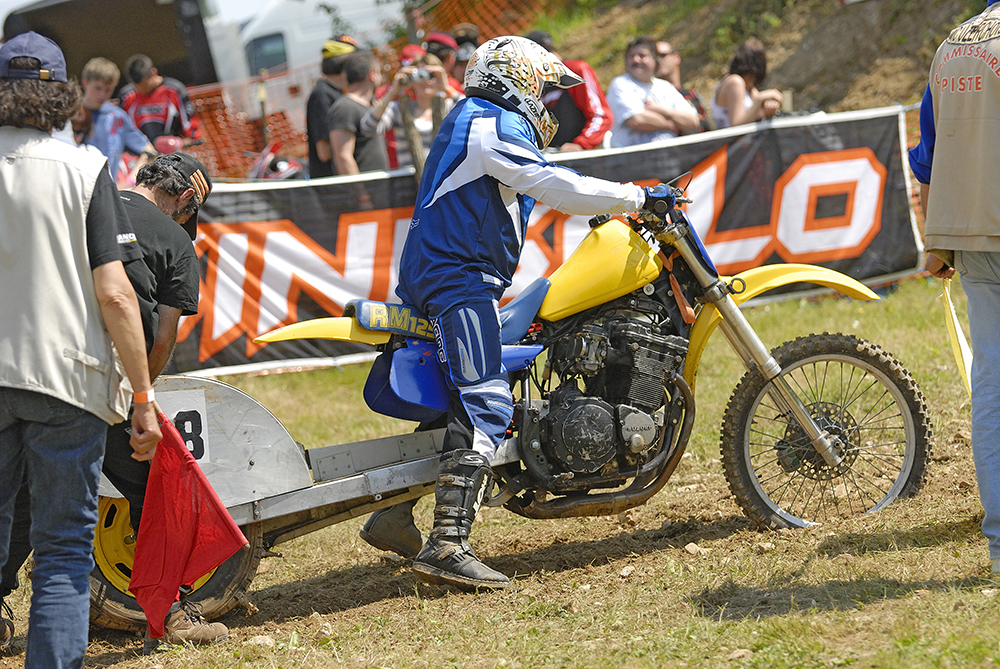 “The hills get so steep that there’s no way you’d be able to start on the hill, so you need to have good momentum behind you at all times.

“As a rider you need to have good throttle and clutch control. You have to keep the motor singing while also reading the hill. A motocross background works well, but it is very different to any other type of off-road motorcycle racing, so it’s harder and more competitive than most people think.”

Hillclimb is one of the oldest off-road motorcycle sports, with the first event held in America in 1903 and it’s been particularly popular since the early 1920s, when riders would compete on Indians and Harley Davidson machinery. However, there was just one bike per event back then, with all riders competing on the same motorcycle. 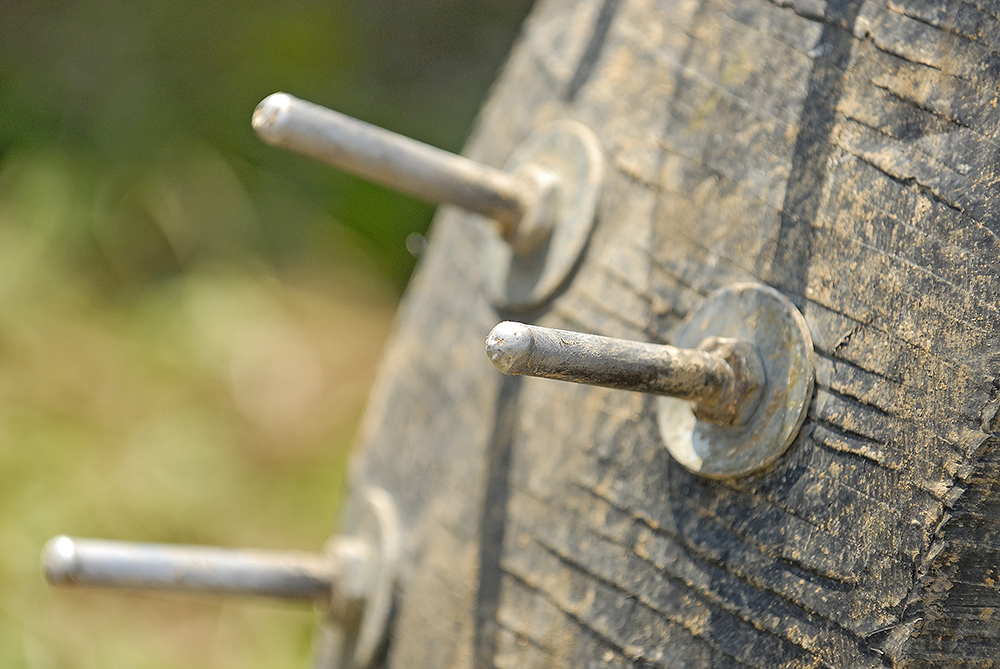 When the American Motorcycle Association (AMA) came into effect, it created the AMA Professional Hill Climbing Series first held in 1976. Today the two major forces in the professional US hill climbing scene are the AMA Pro Series on the east coast and the North American Hill Climbers Association (NAHA) Pro Championship on the west. For years the two series ran different rules but, since 2007, they adopted the same regulations and engine sizes to allow competitors to cross over and compete in both series.

In terms of racing classes, the professional series are broken down into three categories; the 450 Pro class, Exhibition pro class for bikes up to 700cc and the Unlimited Pro Class, where anything goes. The 450cc class is relatively new, the category was introduced as an entry-level division in a bid to attract riders from other off-road disciplines and has become increasingly competitive.

Here in France, the arrival of the 450cc category didn’t happen until around 1987, when the late Eric Aubijoux (he died in a 2007 Dakar Rally accident) and Patrick Innocenti launched the the idea of a domestic hillclimb championship. It was a big project carried by Raoul Bertrand, then vice-president of the French Federation of Motorcycling (FFM). 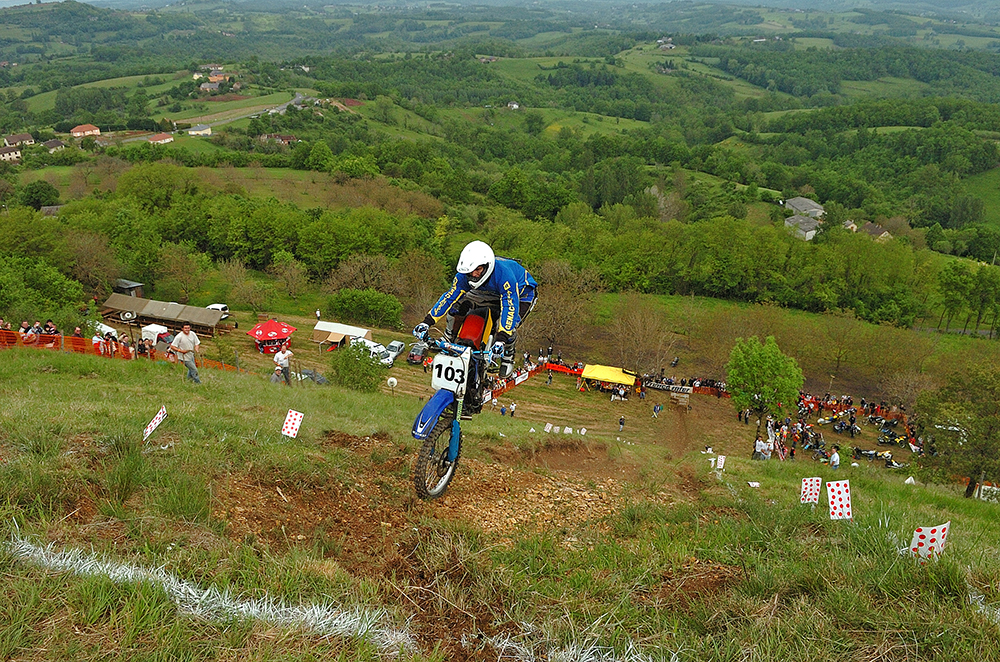 The event gained momentum and was quickly followed by the Nordic countries and Sweden’s Nordic Cup is still hugely popular today.

Before long, the Hillclimb des Nations was launched, France beating the Americans on home soil in the inaugural 2004 event held in Europe, and we got them again three years later in the 2007 edition.

Hillclimb is a big deal in France, in fact, the French championship attracts more spectators than national Superbike championship, proving just how healthy this gravity-defying sport is. As I scan the paddock and try and digest the scene unfolding in front of my eyes, I catch the eye of a mechanic who’s about to kick a 1000cc twin-cylinder two-stroke into life.

“Put your earplugs in,” he winked at me, before using his entire body to land on the kickstarter of a handmade bike with Scud 1000 emblazoned up the side. 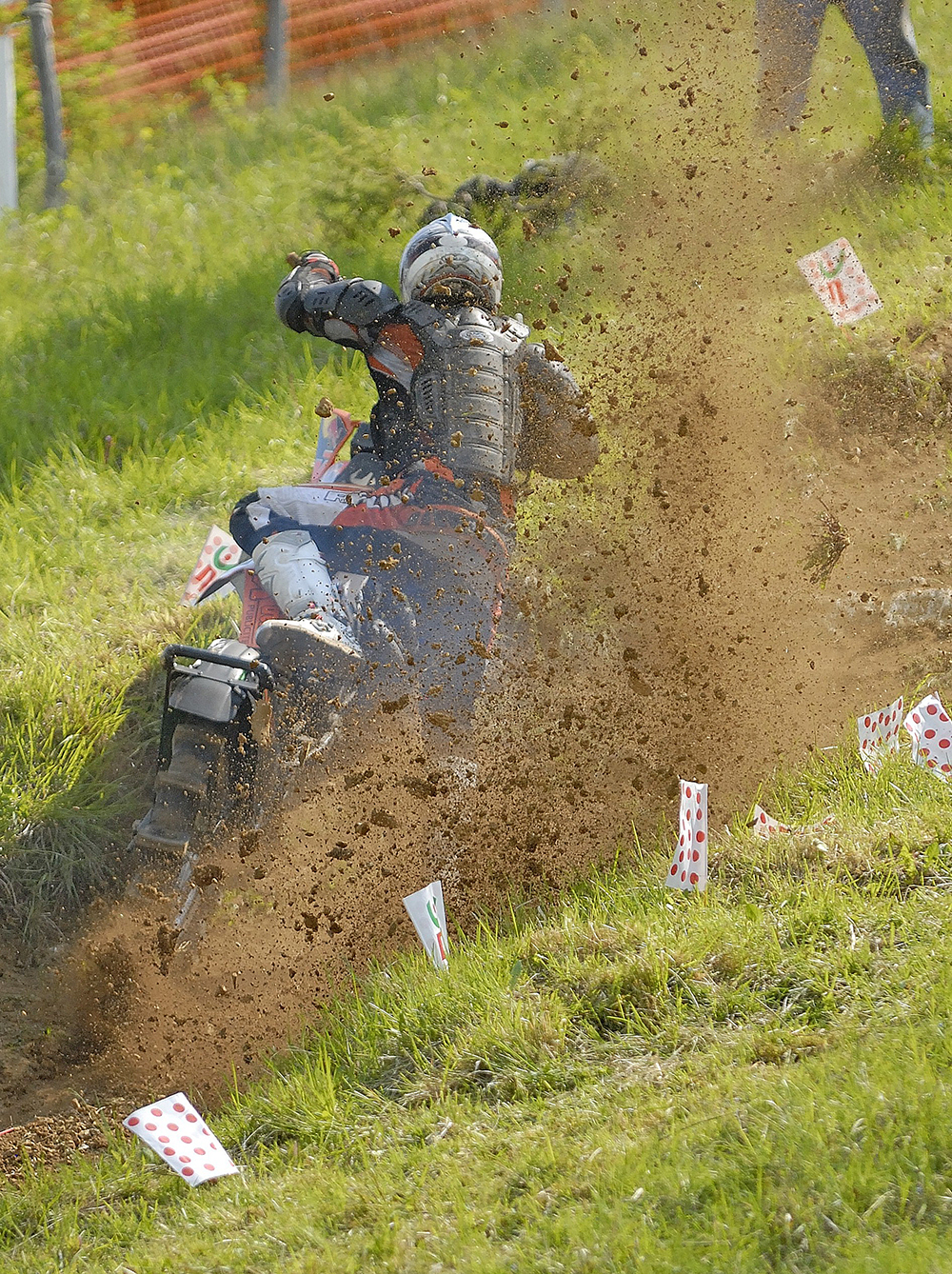 The thing roars into spine-tingling life and leaves me deaf, speechless and tingling all over. And I’m just standing somewhere in its vicinity. Imagine firing the thing up that dirt wall at full noise?! This is an incredible sport.

I learnt from Peterson that the ridiculously long swingarms aren’t simply a stability benefit while riding up these crazy inclines.

“It allows you to use all the power of the bike without wheelying,” he explains.

“The longer the bike, the more the rear wheel spins, which gives the best control on the front. Too much traction is not good in hill-climbing. You need the rear wheel to be spinning.”

And the lower you can get the centre of gravity, the higher your chance of survival when your destiny relies on a few long bolts sticking out your rear tyre, albeit sharps ones. 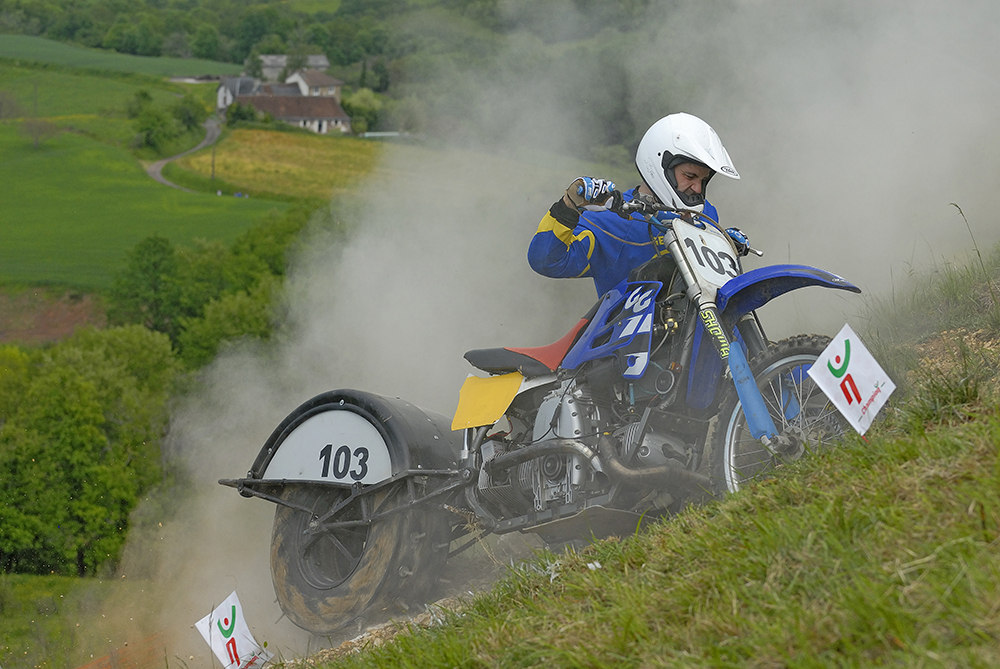 Boutiton was unable to celebrate on the podium after breaking his foot on his last run.

To try and trick the laws of physics may sound like a best way to spend a Sunday, but it’s always simply an attempt, never a given. And with some sections of the hill a dead vertical 90 degrees – even negative in some short sections – very few riders can actually lay claim to crossing the summit.

It’s a discipline that separates the men from the boys and, more often than not, the boys from their bikes! Yet all will come back for more, as the will to conquer is more powerful than any number of two-stroke engines bolted together. 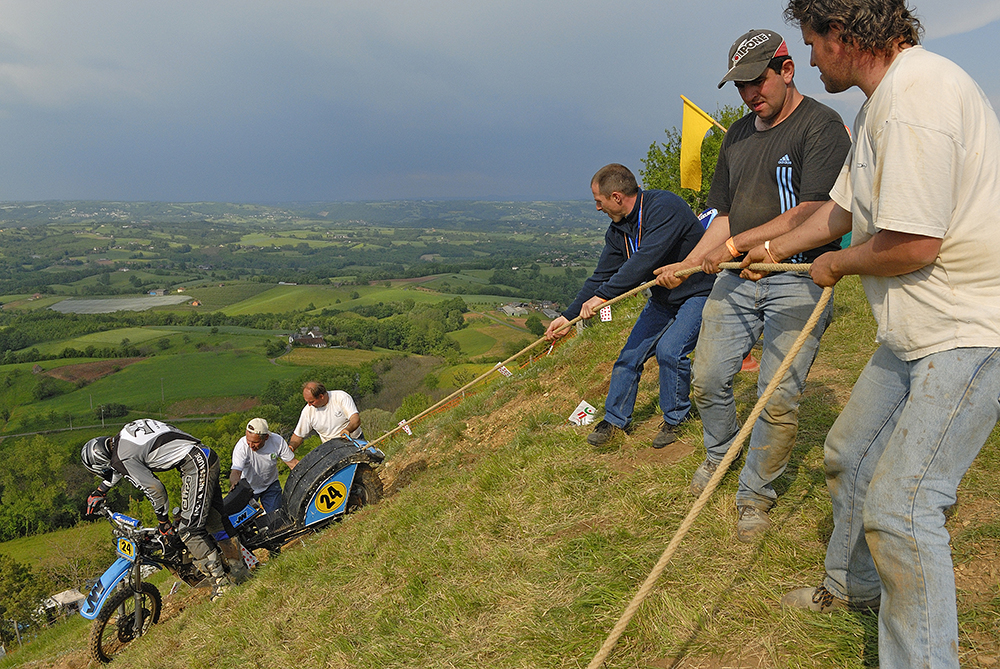 Keeping up with the Petersons

Hillclimb has history in America. Home to the world’s largest, meanest and steepest hill climbing events, there’s one family who stands out, the Petersons.

He retired in 1998, but a decade later sons Brett and Robbie were racking up the silverware. Robbie, who started hillclimb racing when he was just five years old, had a world championship to his name and the pair a bunch of NAHA titles between them.

These days, Team Peterson Racing is the most victorious professional motorcycle Hillclimb team on the planet. Their current riders, Jake Anstett and Sammy Hummel, dominated the 2018 and 2019 seasons. The family runs an invitational event called The Peterson Cup and word on the hill is there’s a four-year-old talent bearing the Peterson name who already looks to be the next big thing. 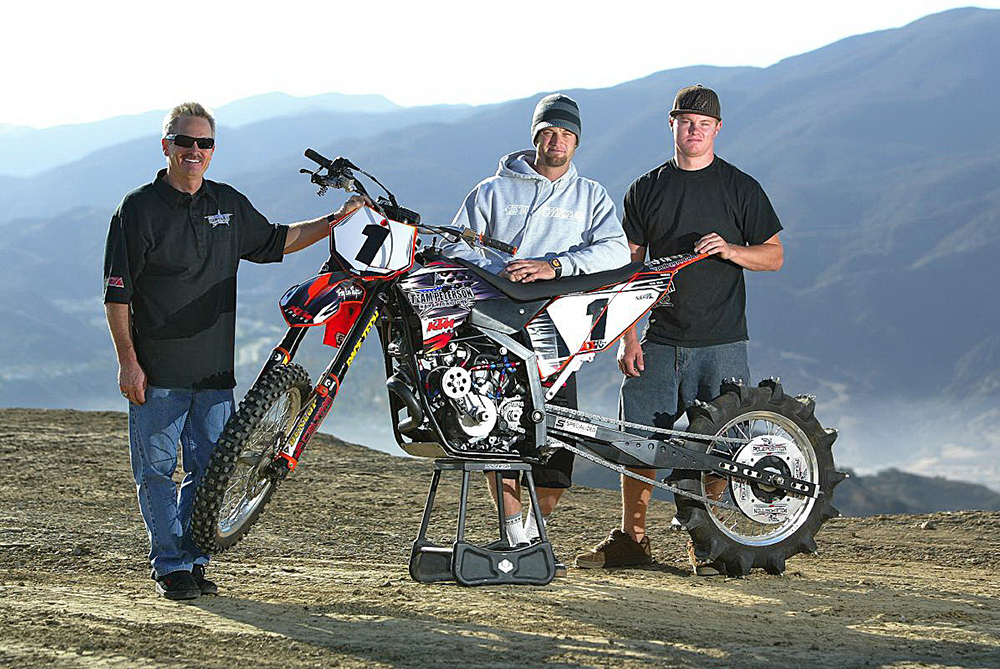