Alongside the 2021 generation Scramblers comes a new beautiful and unique limited edition that celebrates the most famous movie star, stunt and motorcycle in history, with the Scrambler 1200 Steve McQueen Edition. 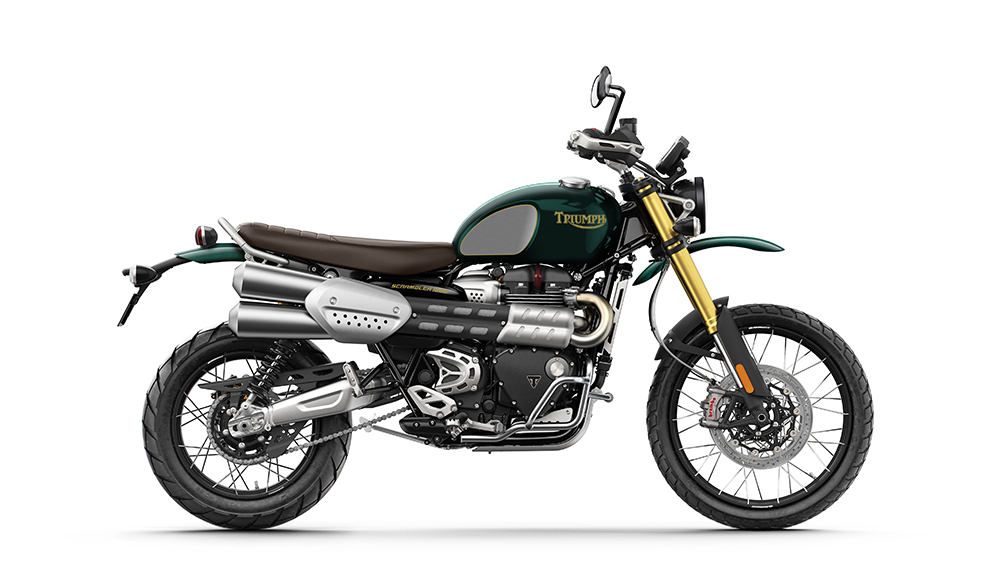 First launched in 2018, the Triumph Scrambler 1200 has rapidly become a modern Triumph icon, winning fans with its riding capabilities both on-road and off-road, its state-of-the-art technology, specifications and extensive customisation options.

Born from an unparalleled Triumph Scrambler bloodline, including the world’s first production scramblers, raced for fun and glory by legendary racers such as Bud Ekins and Steve McQueen, the new generation has featured in multiple extreme off-road competitions, including the Mexican 1000 and the Spanish Bassella race, repeatedly demonstrating their class leading capability.

A major highlight in the success of the new generation came with it featured in the 25th James Bond movie, No Time To Die, where it received high praise from Lee Morrison, James Bond Stunt Coordinator, who said “the whole stunt team realised very quickly that these were amazing bikes”. 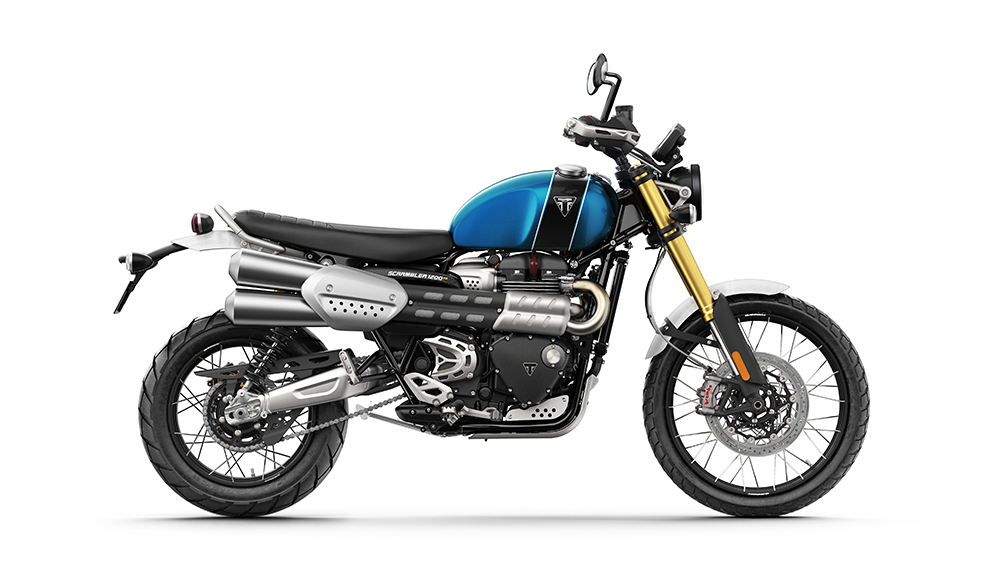 ALL OF THE SCRAMBLER 1200’S CLASS LEADING CAPABILITY.
The 2021 Scrambler 1200 XE and XC represent the latest generation of one of the most capable and unique motorcycles on the market, and one of Triumph’s highest specification models ever. A genuine, class-defining cross over of two motorcycle worlds, with the iconic style and character of a Triumph Modern Classic, combined with the capability and specification of a full-on adventure motorcycle. 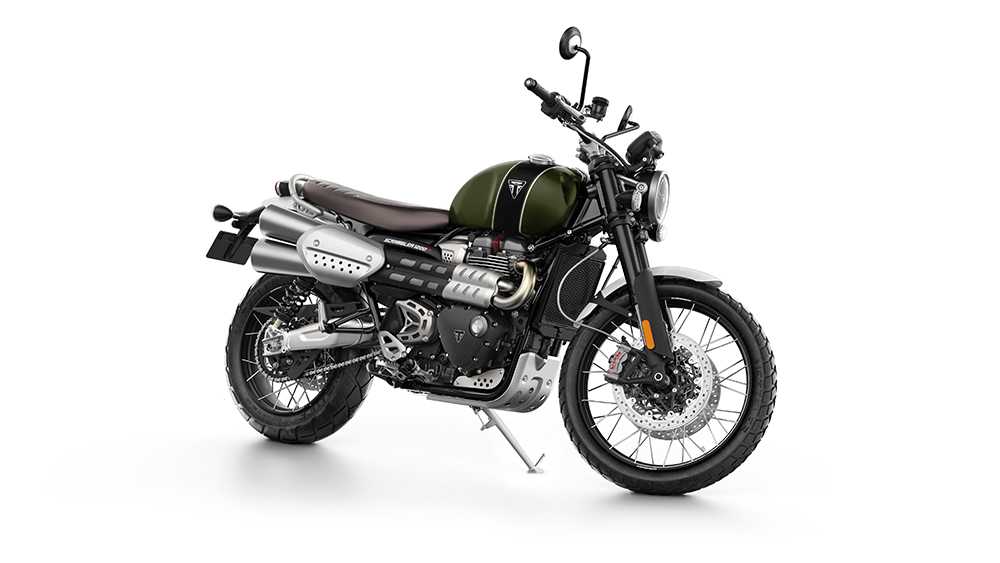 ENHANCED FOR 2021
Updated for 2021 along with all of Triumph’s iconic modern classic line-up, the new Scrambler 1200 XC and XE features a Euro 5 engine evolution that maintains all of the Scrambler’s renowned power and torque delivery and delivers lower emissions. Additionally, the new generation update brings a revised exhaust system that delivers improved heat distribution. 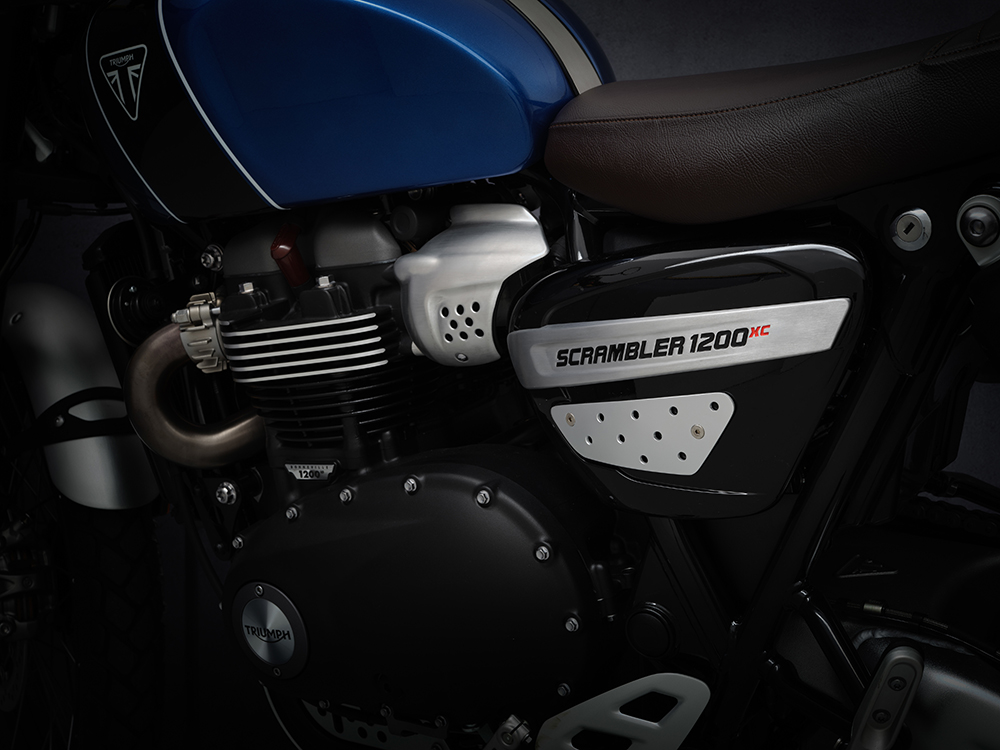 The Scrambler 1200 is powered by the latest evolution of Triumph’s characterful 1200cc high-power British twin. New for 2021, the engine update delivers lower emissions, exceeding Euro 5 requirements. With a low inertia crank and a high compression cylinder head, plus a dedicated Scrambler tune, specifically developed to give the perfect balance of power and torque delivery for both road and off-road riding, the result is incredible torque from low down right through the rev range.

Peak torque hits 110Nm at just 4,500rpm, while peak power of 90PS arrives at 7,250 rpm. The distinctive Scrambler sound, produced by the 1200cc 8-valve parallel twin engine, is delivered by the twin high level exhaust system which has also been updated for Euro 5 compliance, with the added benefit of improved heat distribution. 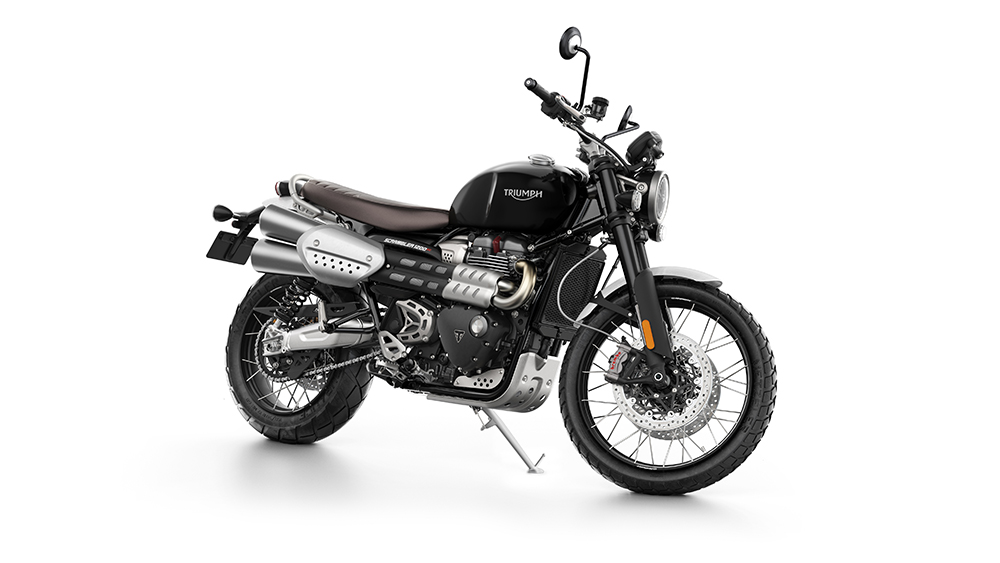 Stopping-power is provided by the category-leading Brembo M50 radial monobloc calipers, with twin 320mm floating discs on the front, and the Brembo caliper with single disc, on the back. Braking power is managed by the ABS that comes as standard on both models. 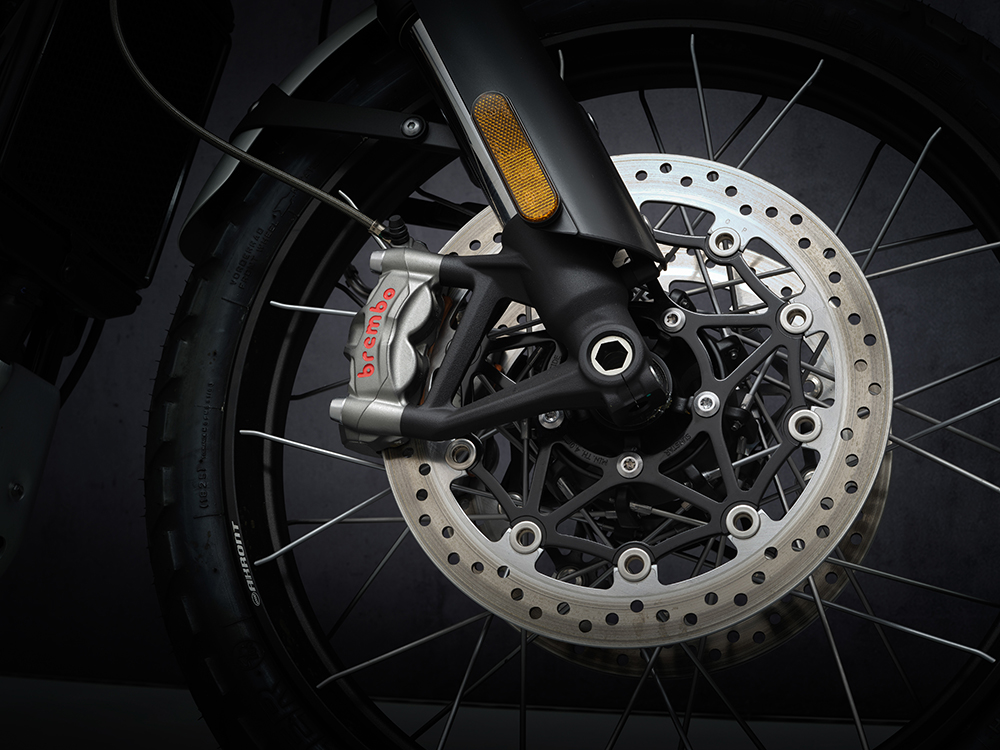 Enhancing the multi-purpose character of the Scrambler 1200, high specification wire spoked wheels with aluminium rims and a side-laced design, come as standard, allowing the use of tubeless tyres. Dual purpose adventure-focused Metzeler Tourance tyres are the standard fit, while for more extreme off-road use, Pirelli Scorpion Rally are recommended as an approved alternative option.

The 21″ front wheel contributes to the Scrambler 1200’s off-road capability and riding position, and gives great visibility ahead, both when commuting and off road. This, combined with the wide adjustable handlebar position and the adjustable folding foot controls on the XE model, give the Scrambler 1200 its commanding poise and stance. 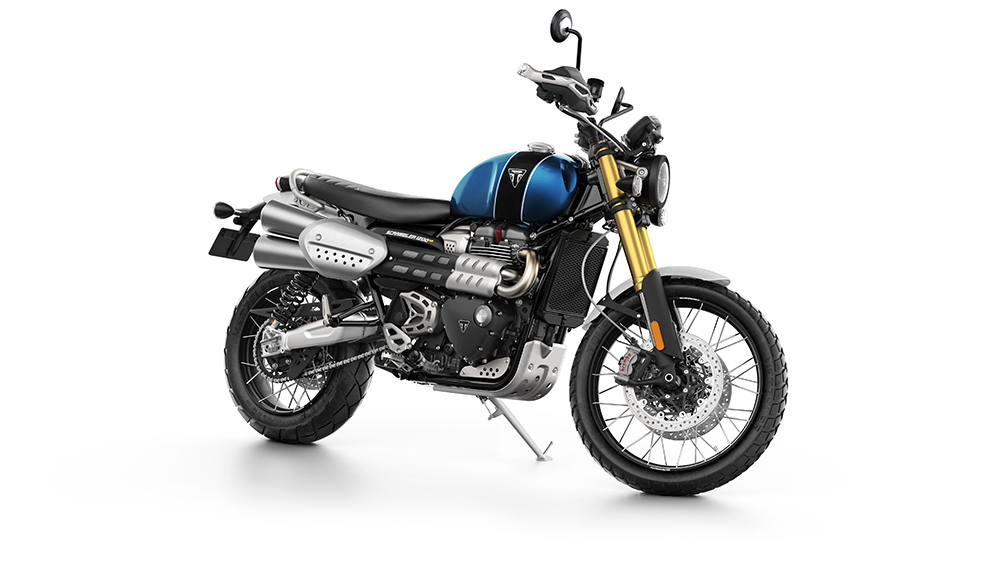 Packed with the state-of-the art technology and rider aids, the new Scrambler 1200 XC and XE really set the benchmark. Both models feature the full-colour TFT instruments offering two different design themes, each with three display layout options, allowing the rider to alter the amount of information shown, according to their preferences. The TFT start-up sequence can also be personalised with the rider’s name. The multi-functional TFT display is controlled via the intuitive and easily accessible handlebar mounted 5-way joystick and other switches, all of which are backlit for easy navigation in the dark. High and low contrast displays ensure the TFTs are readable in all lighting conditions, while the adjustable screen angle suits every rider’s height thanks to the possibility of adjusting it. 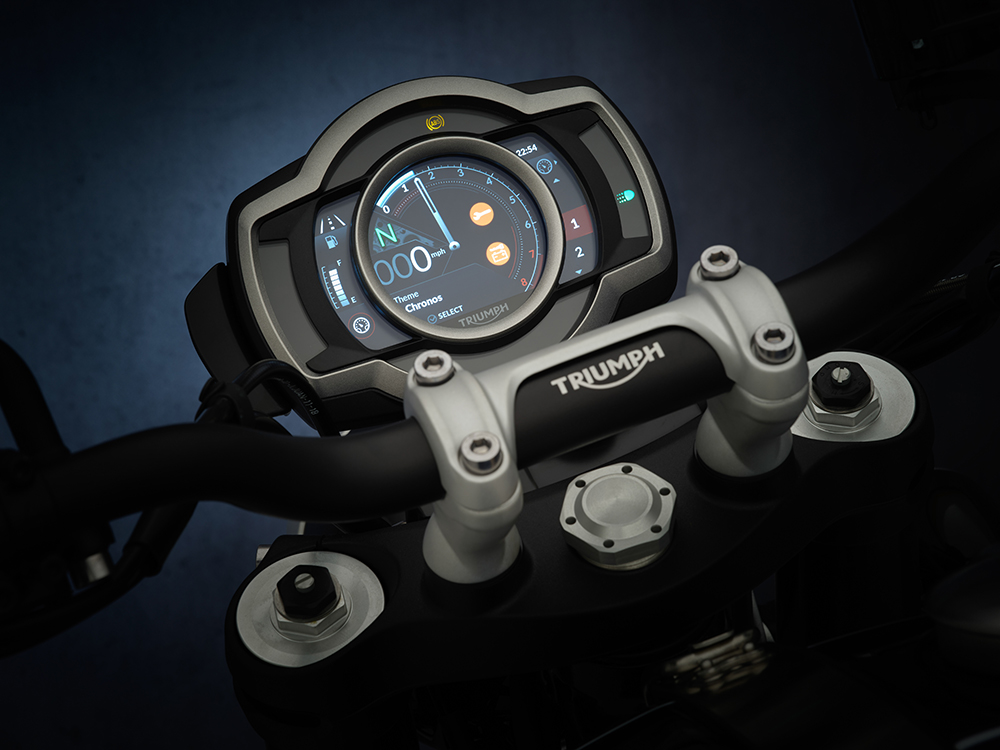 The new Scrambler 1200 is also pre-enabled for the accessory-fit My Triumph connectivity system. This allows the rider to access phone calls, operate music, use turn-by-turn navigation and manage a Go-Pro through an intuitive handlebar controls and TFT interface.

Triumph’s latest generation ride-by-wire ensures responsive and precise throttle control at all times, and enables the 6 riding modes – Road, Rain, Sport, Off-Road, Off-Road Pro (available on the XE only) and Rider-Configurable. The riding modes, which can be selected while on the move (with the exception of the Off-Road and Off-Road Pro modes) adjust throttle response, traction control and ABS settings for enhanced safety and optimum performance in all riding conditions. 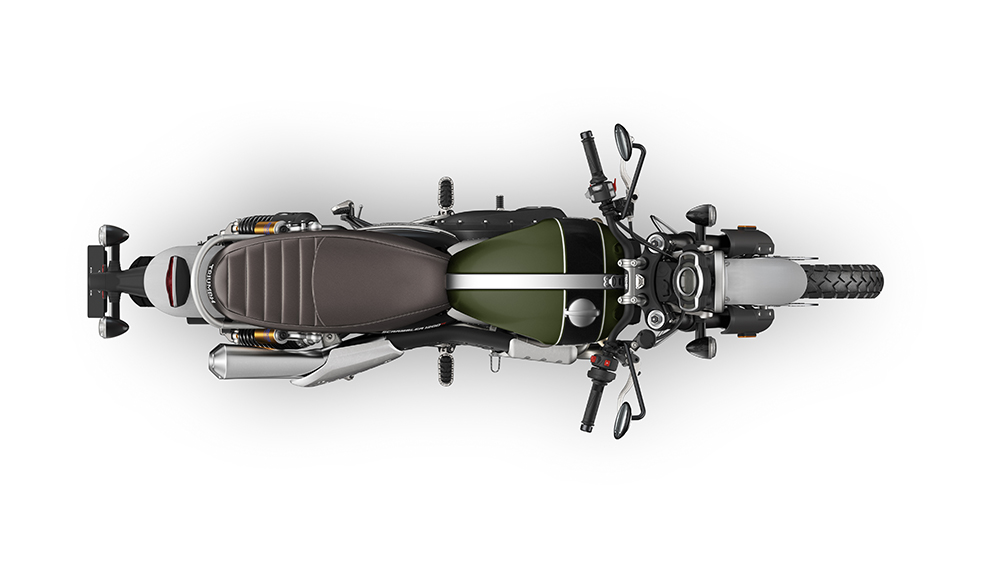 The Scrambler 1200 XE also features optimised-cornering ABS and optimised-cornering traction control both of which automatically adapt the level of intervention to maintain the optimum ride, at any lean angle. These features are managed by the Inertial Measurement Unit which measures the roll, pitch, yaw and acceleration rates of the bike in order to calculate the lean angle and optimise braking and traction control accordingly, ensuring greater rider stability.

Additional high specification rider-focused technology, standard on both of the 2021 Scrambler 1200 models, includes torque-assist clutch, cruise control, keyless ignition, under-seat USB charging socket and the internal wiring ready to plug in the accessory fit heated grips, which have 3 modes and are accessed through a really intuitive button built into the left grip. 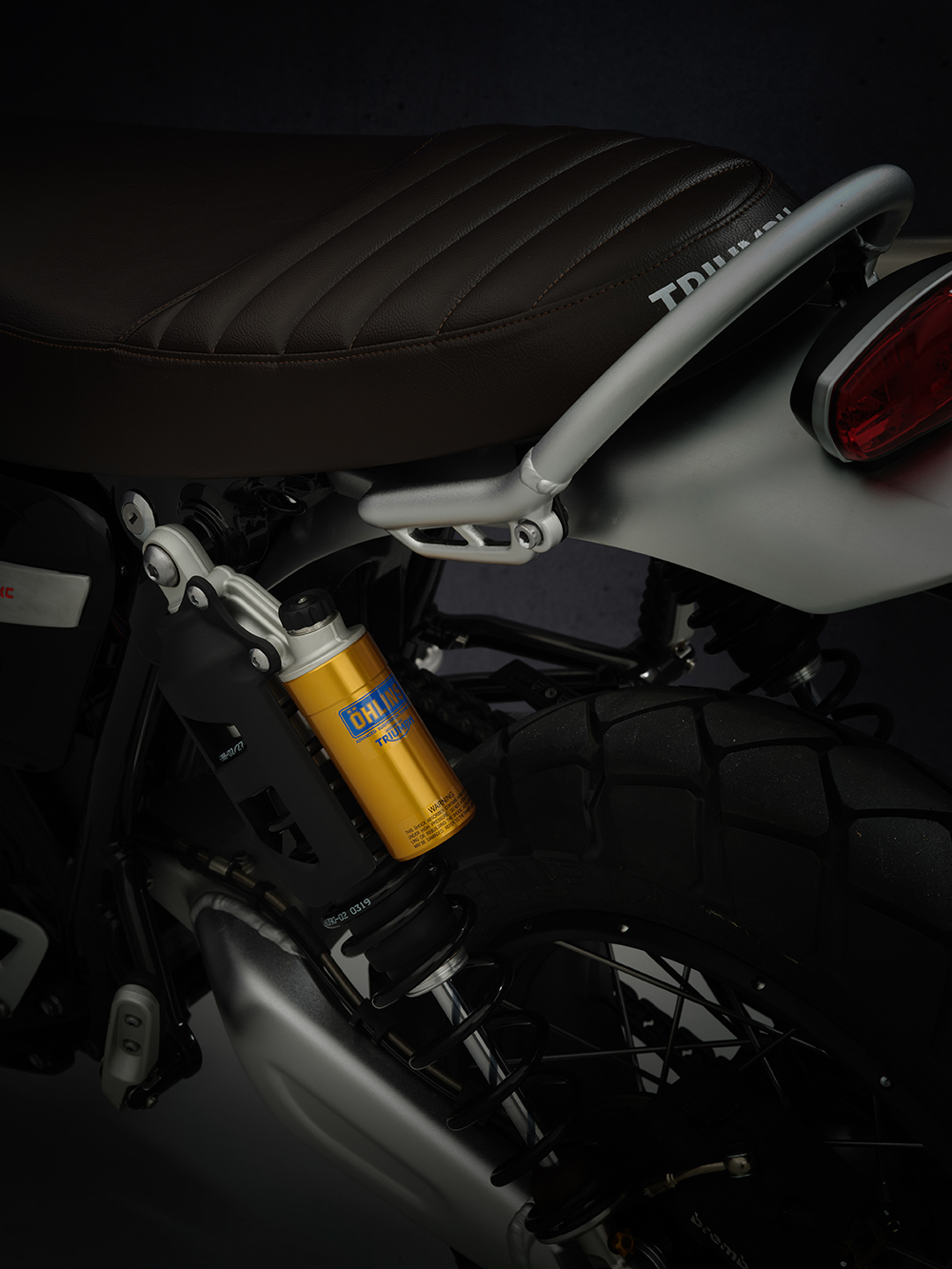 Modern Custom Style with Category-Leading Finish and Detailing
Combining Triumph’s original Scrambler DNA, with beautifully crafted modern custom style, these bikes deliver all the hallmarks of a genuine scrambler. From the iconic silhouette with its high level twin exhaust, to the commanding height and poise, the new 2021 Scrambler 1200 XC and XE have true scrambler-defining style.

Just like every Bonneville, the engine presents the distinctive machined engine fins and black engine covers with its classic maker’s-mark triangular Triumph engine badge. These models also have a category-leading standard of finish and detailing, with authentic features such as the seamless sculpted 16 litre fuel tank, with brushed aluminium Monza fuel cap and brushed stainless strap. The custom-looking bench seat with stitched ribbing and Triumph branding completes the striking silhouette while delivering the optimal riding position and comfort when tackling any type of ride. 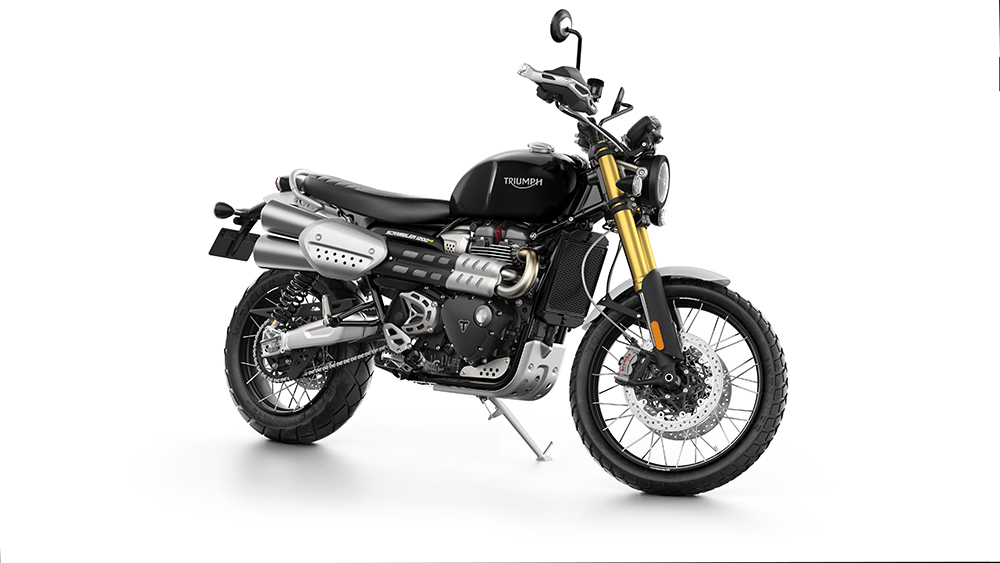 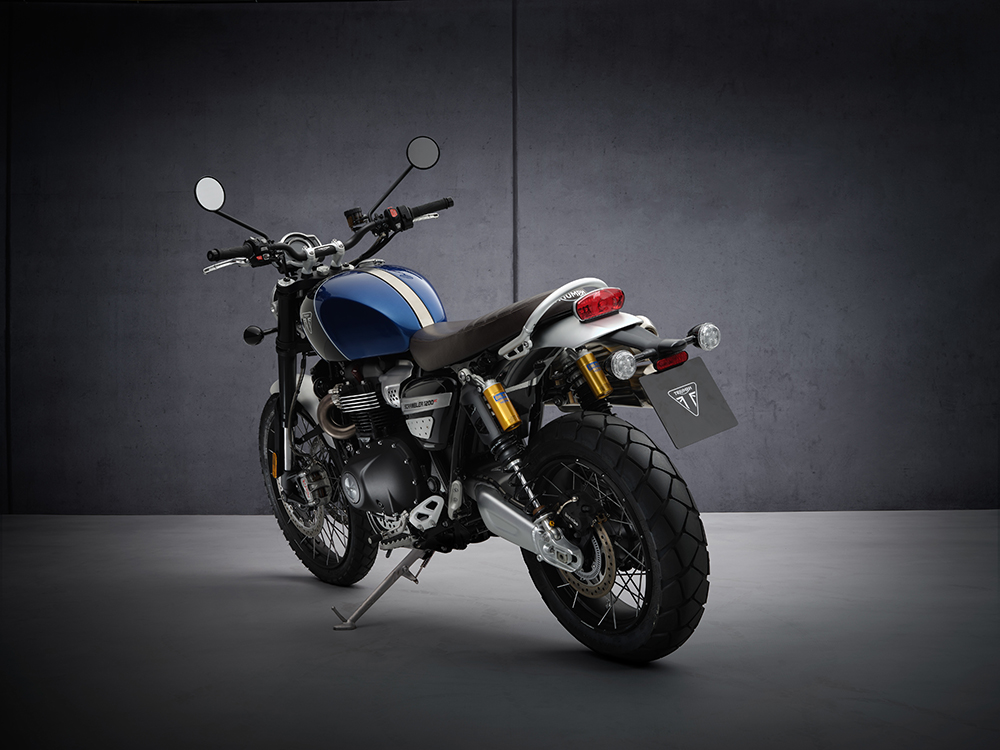 Celebrating the most famous movie star, stunt and motorcycle in history, the new Scrambler 1200 Steve McQueen Edition brings all the new-generation 2021 Scrambler 1200 XE’s category-dominating specification, go-anywhere adventure-bike capability and state-of-the-art technology, and adds its own premium Steve McQueen paint scheme and extensive list of beautiful unique details. Fully equipped with a selection of premium Scrambler accessories, fitted as standard, the McQueen Edition is now officially the highest specification Scrambler 1200 ever. 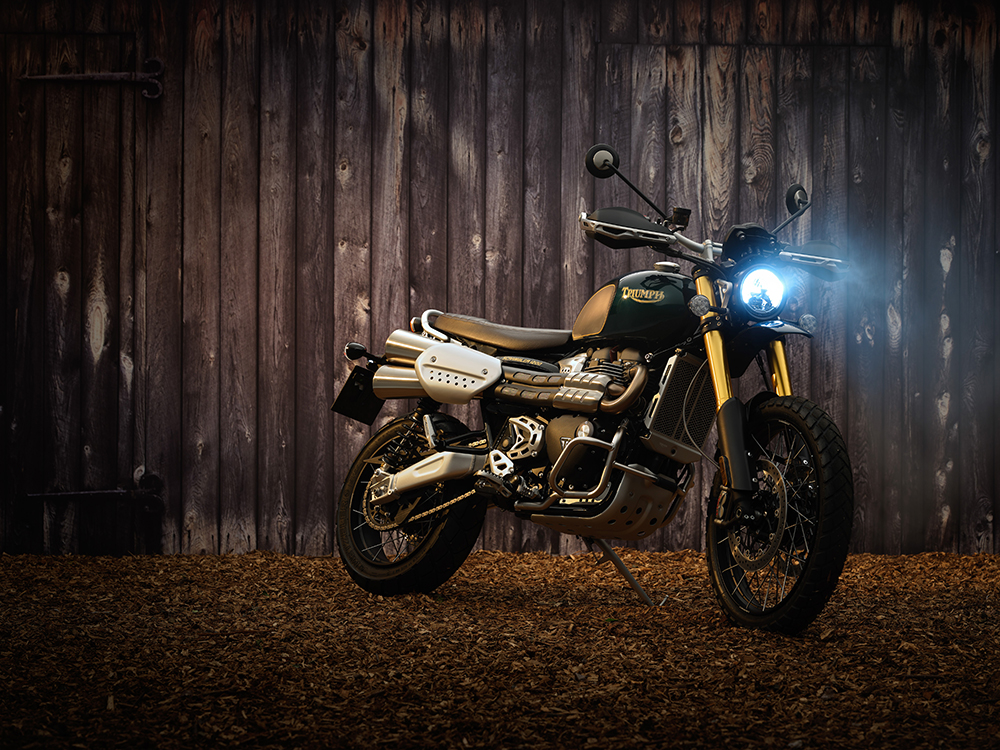 Inspired by a genuine motorcycle legend
Inspired by the original competition-spec Triumph TR6, made famous by the legendary barbed wire jump in the iconic 1963 Second World War classic “The Great Escape”, the Scrambler 1200 Steve McQueen Edition has been developed in partnership with the McQueen family. Chosen to ride in the film by McQueen, over of a period-correct German military motorcycle, the Triumph TR6 used in the jump was created by a British Triumph dealer and ISDT Gold Medal racer Ken Heanes, with an ISDT suspension set-up designed for robust stunt work. 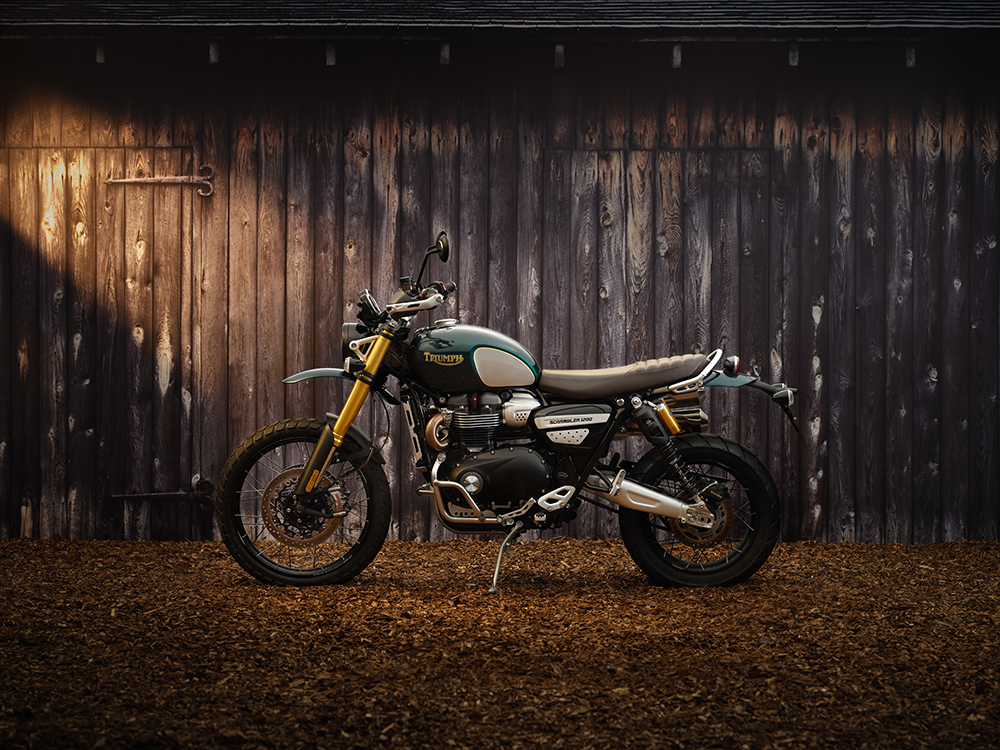 Unique limited edition
With just 1,000 Scrambler 1200 Steve McQueen Edition models available worldwide, each bike is individually numbered on the beautiful billet-machined handlebar clamp, which also features a laser etched Steve McQueen signature. For even greater exclusivity, each bike comes with a unique certificate of authenticity stating the bike’s VIN number, and carrying the signatures of Triumph’s CEO, Nick Bloor, and also Chad McQueen, son of the legend himself, Steve McQueen. 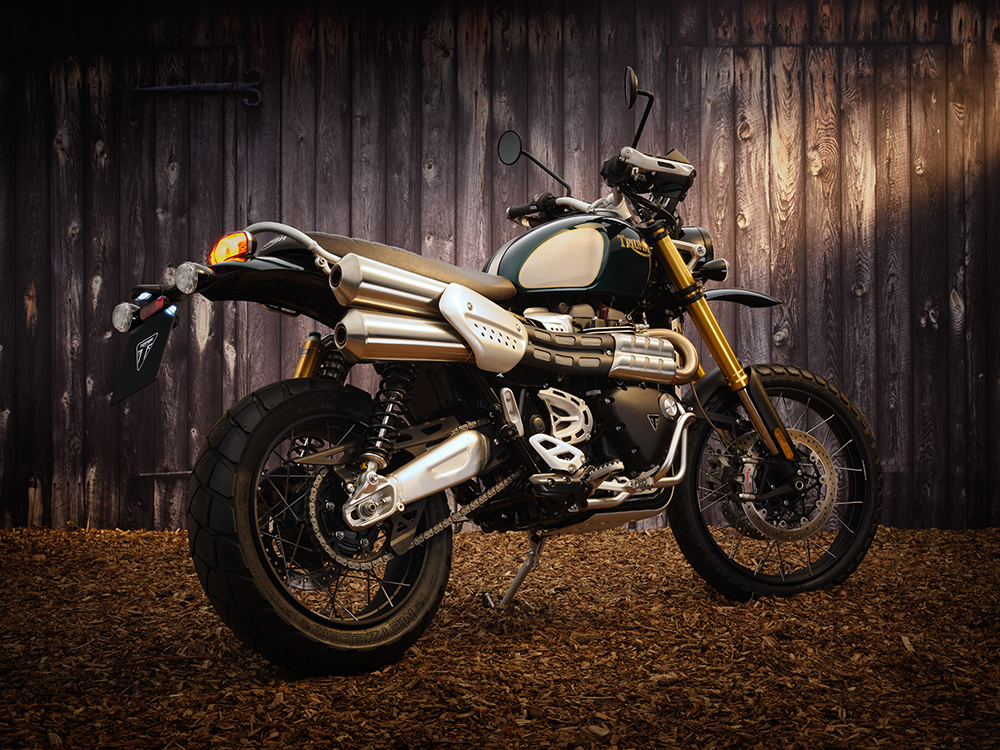 In addition to the standard 1200 XE’s class leading specification, the Steve McQueen Edition comes fitted with engine protection dresser bars, which add another layer of ruggedness. Fabricated from stainless steel tubing, these have an electro-polished finish and offer additional protection to the clutch and alternator covers. 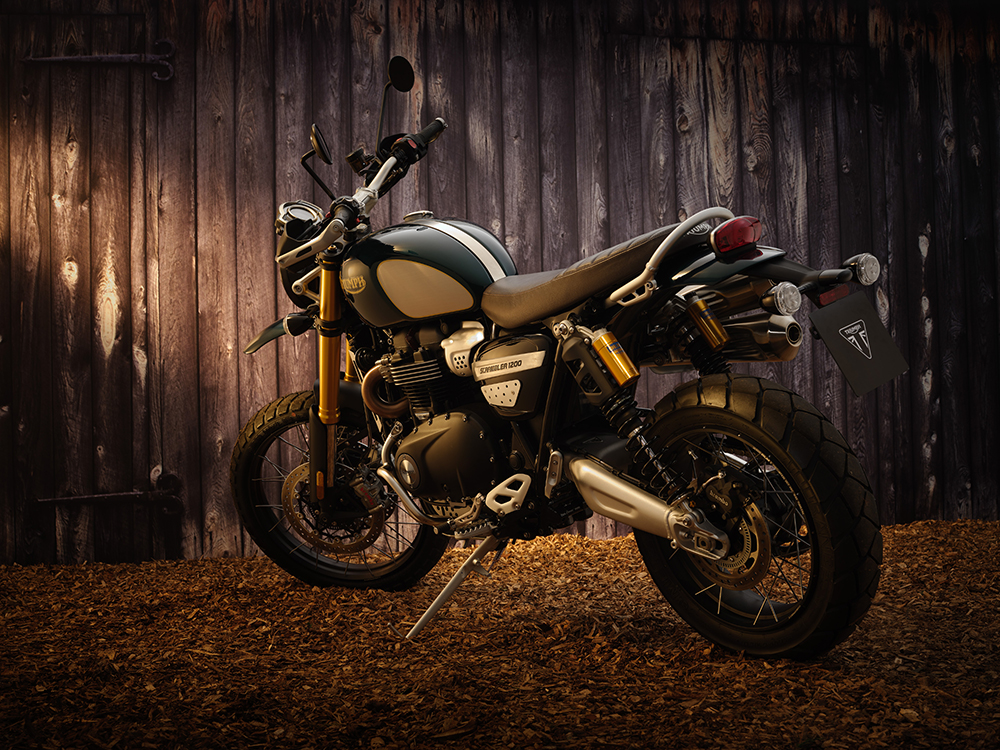 Aside from movie stardom, Steve McQueen was also renowned for his Triumph Scrambler desert racing, which makes the Scrambler 1200 XE the perfect base for the exclusive edition, thanks to its class-defining capability both on and off-road. The new McQueen Edition shares all of the acclaimed XE specification and performance, including the 2021 engine and exhaust system updates, making the limited edition fully Euro 5 compliant. Being a genuine cross-over motorcycle, it has all the capability of a full-on adventure bike with the iconic style inherited from its legendary Scrambler lineage.

The new Scrambler 1200 Steve McQueen edition is also pre-enabled for the accessory My Triumph connectivity system. This allows the rider to access phone calls, operate music, use turn-by-turn navigation and manage a Go-Pro through the intuitive handlebar controls and TFT interface. 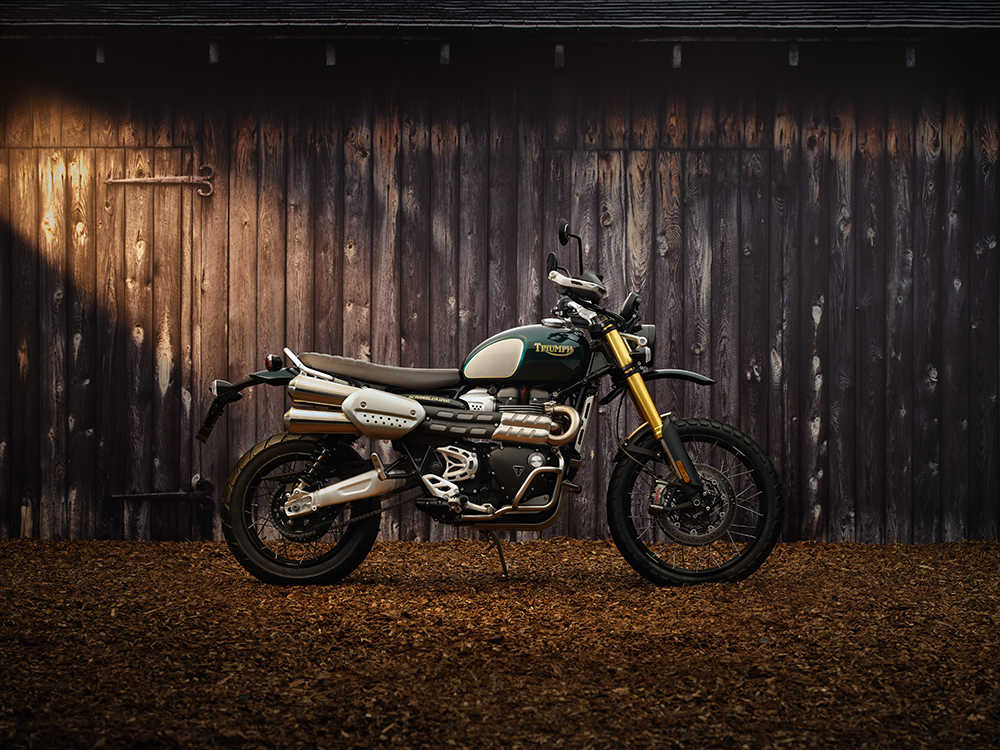